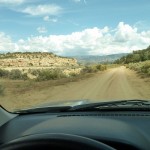 I hope that the book The Gentle Art of Wandering and the posts in this blog have shown you that you can wander anywhere and that almost every area has something special to offer when it comes to wandering. For example Los Angeles has its public stairways while New Mexico has its wide open and almost empty backcountry. Both are great walking experiences.

To provide an example of what you can expect on a backcountry wandering, the dogs and I went wandering in a tract of Bureau of Land Management (BLM) land northwest of Albuquerque a few days ago. We went there to record the locations of several archaeology sites that we had seen before.

Because I am a BLM volunteer, I cannot give you exact locations. But if you are interested in finding archaeological sites in New Mexico, you can start by checking out a sandy ridgeline or a finger of land coming off of a sandstone mesa. If you let yourself see, you just might stumble on to a few sites.

There are some earlier posts in this blog that can give you some background on dealing with roads and other items in the backcountry.

We did have to drive on a dirt road to reach our destination. In this case the road was fine. 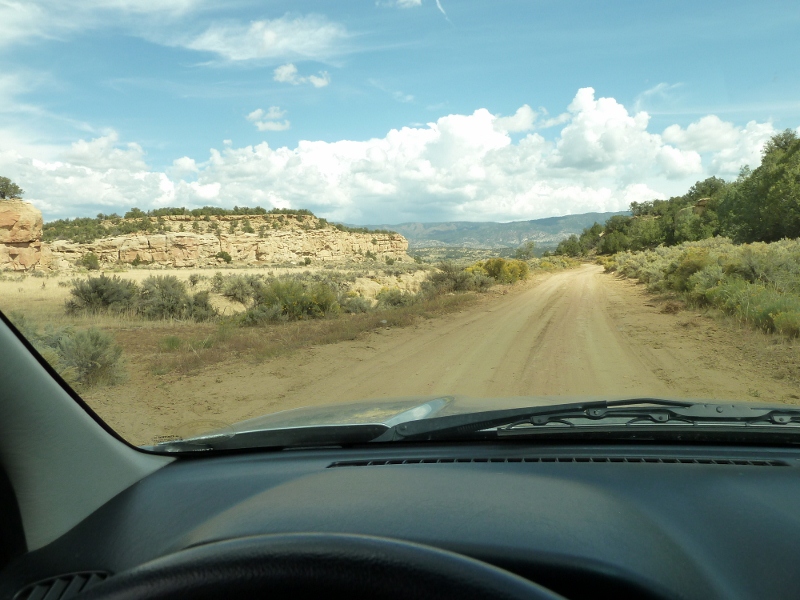 Had the road been wet we probably would have chosen a different destination. The addition of rain would make this road a nightmare.

After a few miles on the dirt road we reached our parking spot and started wandering. We followed the trace of an old two-track road that has probably not seen a vehicle in years up a sandy ridgeline. Within minutes we ran into our first archaeology site. 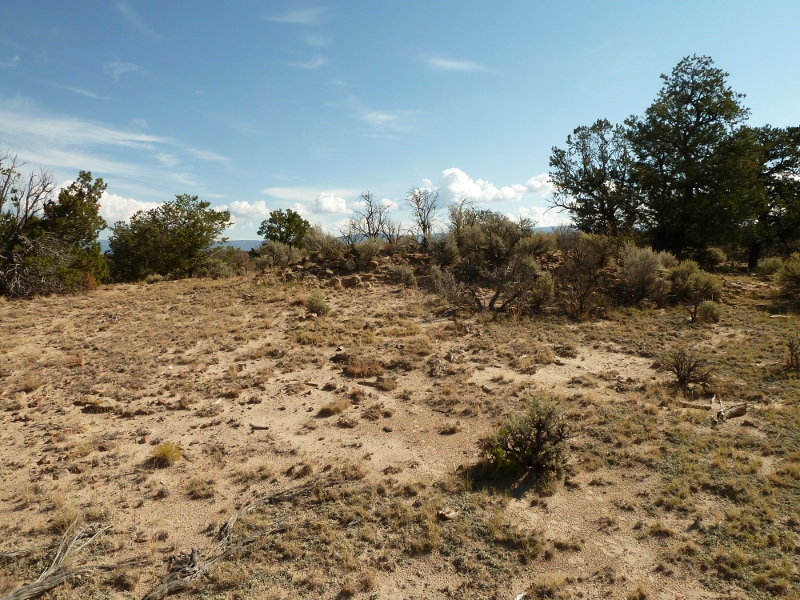 This shrub-covered pile of rocks is a site. That pile was once a masonry structure. If you walk around you’ll see that the site is more than a pile of rocks. On the ground you’ll see broken pieces of pottery and flint flakes from stone tools. The broken pieces of pottery can be used to determine when the site was occupied. The paint used to decorate the pottery on this site indicates that it was probably occupied around the year 1250.

If you look on the east side of the pile (towards the right in the above picture) you might see a slight depression in the ground. That depression is all that remains of a pit house. The occupants would have slept in the pit house and stored their corn in the masonry structure.

The roof of the pit house would have been a small plaza where the daily chores were performed. Locating the masonry structure on the west side of the pit was not an accident. The rocks would have absorbed heat from the sun on a cool desert morning. Later in the day that same structure would have provided cooling shade from the hot afternoon sun.

If you look some more, you might find other artifacts from their daily life. You might even find stones used to grind corn.

Your first question might be how could someone grow corn where you can’t grow corn today? Obviously there were periods of time, even in an arid area like this, when you could grow corn. Because these weather patterns shift, the people in this area moved on. As a result you can find sites in many different locations in the desert. That is why you always have a good chance of finding something when you wander in the backcountry.

In our case we didn’t have to look far for our next site. It was only a few feet from the first one and had the same pattern of a rock pile with a pit depression. It turned out that we were in a community where one site ran into another. Except for a few interruptions the sites were almost continuous.  We would eventually find over 20 sites on our walk. 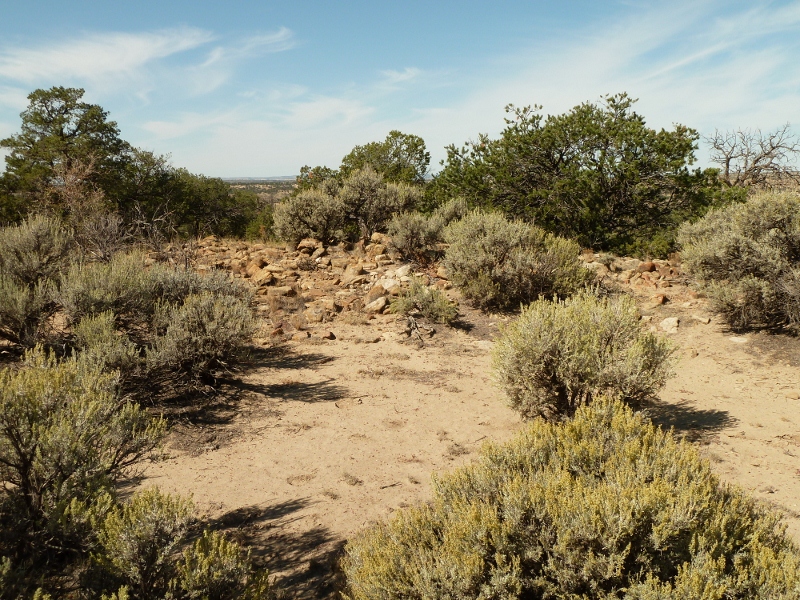 The pit depression (towards the right) is more obvious on this site (see below). 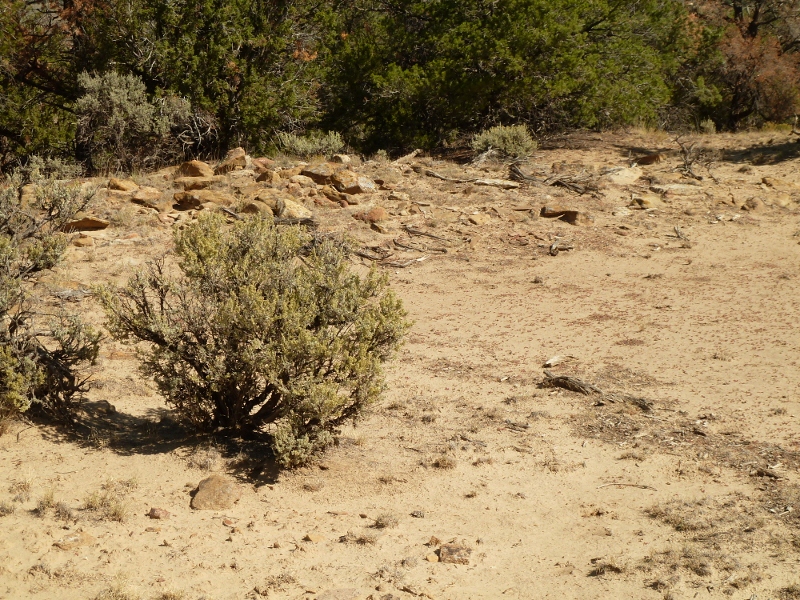 Unfortunately this area experienced some pot hunting many years ago. The perpetrator was eventually caught and spent some time in jail for his actions. The smooth spot in front of the rocks in the picture below is the result of digging. 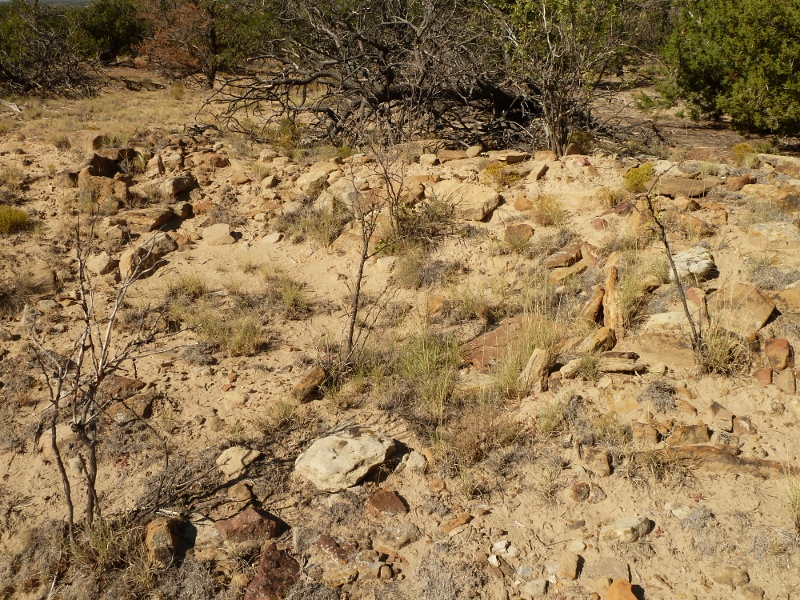 Here is another site where someone dug. 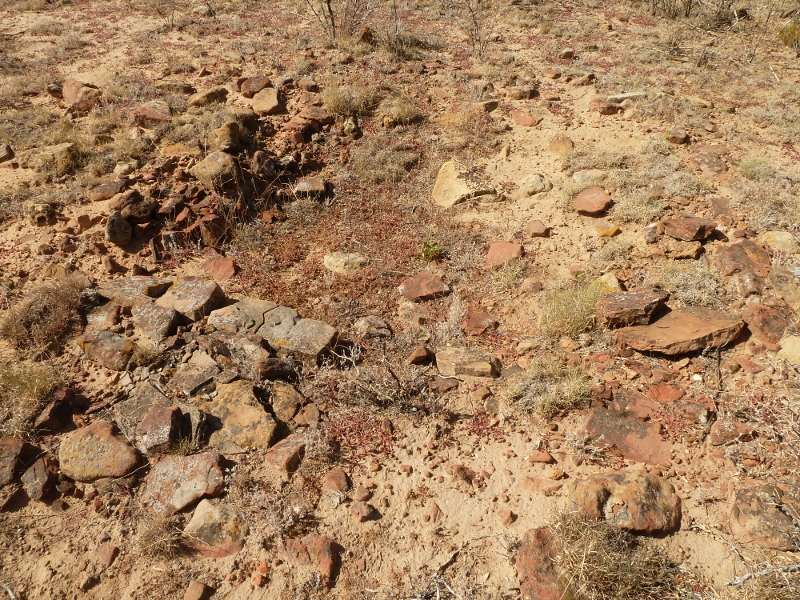 If you do visit an area with archaeology sites, please leave everything the way you found it. Disturbing a site is not only illegal; it is wrong. The site and its associated artifacts are part of the land and they belong where they are.

As we continued our walk we found a site that wasn’t a pile of rocks. You can see part of the wall alignment in the site below. 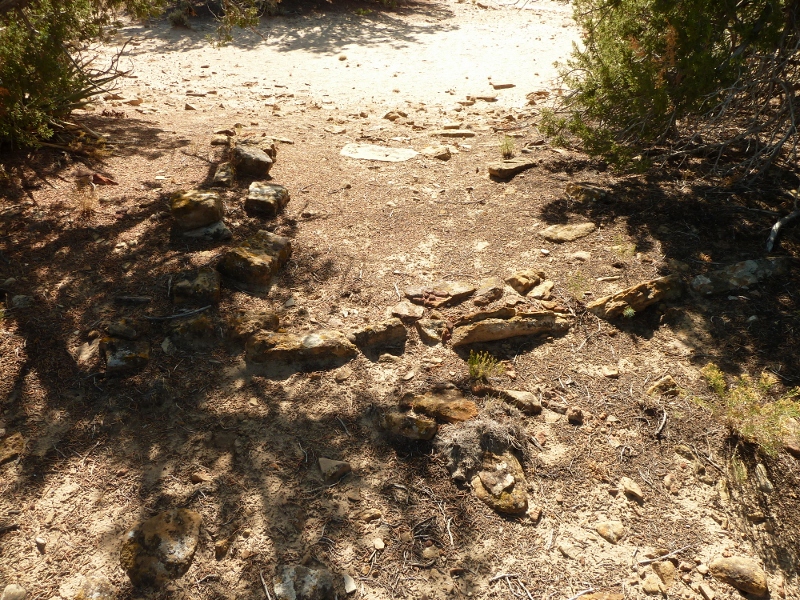 Every site we saw was covered with pottery. There was even pottery away from the sites. We were never more than a few feet away from a potsherd. Here are a couple examples of what we saw. 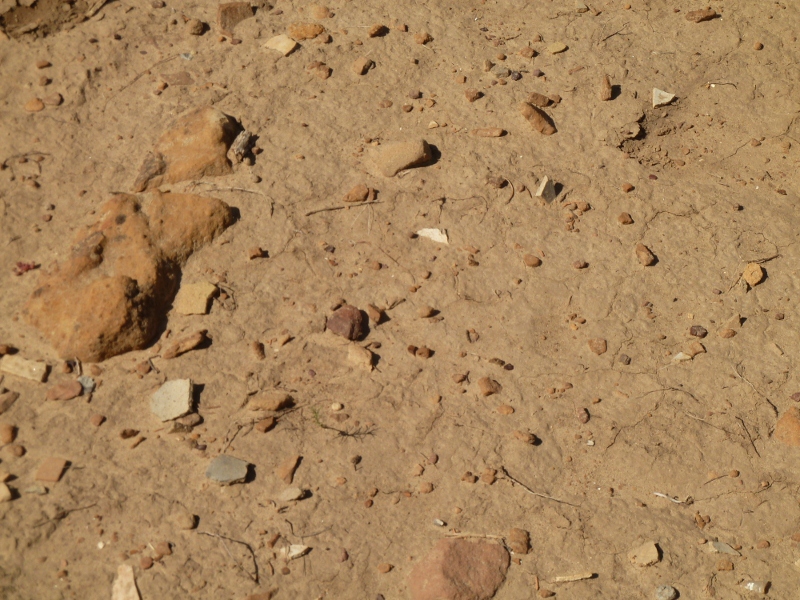 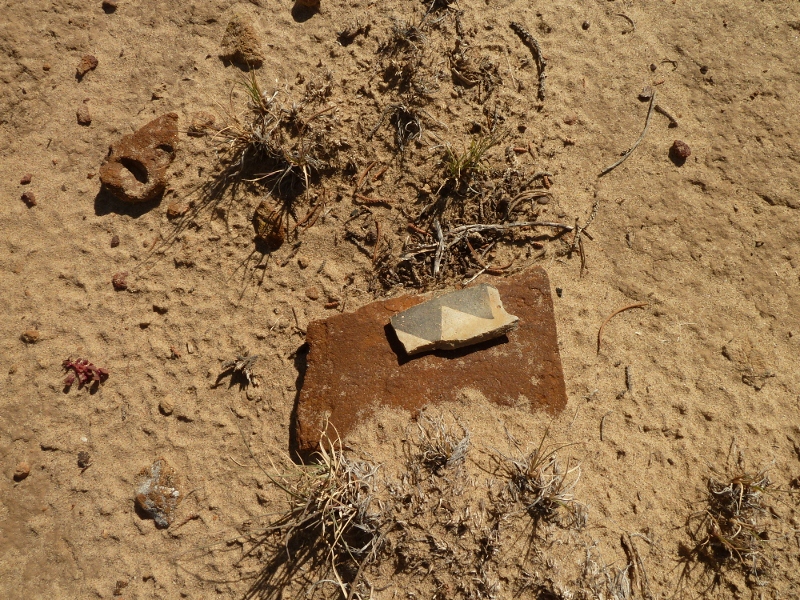 We eventually reached the end of the sandy ridge we were following and found ourselves on the top of a 30 or 40 foot high sandstone cliff. There we found a site that was not a housing unit. It was a shrine or a place to observe the sun. It may have been a calendar to determine when to plant and when to harvest. Those standing rocks are probably lined up to different positions of the sun. 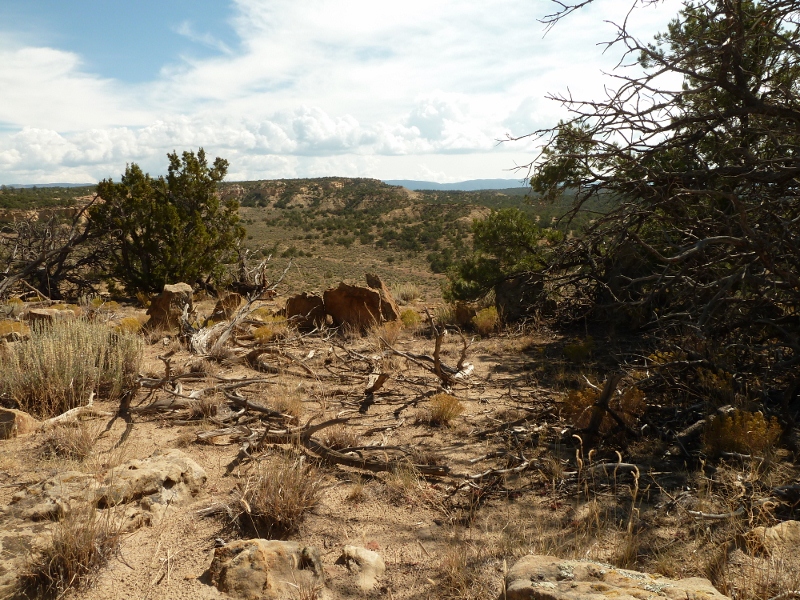 A closer look shows an opening to the east. If you camped out here on the Equinox, you would probably see that the sunrise would come up right through the middle of the opening. 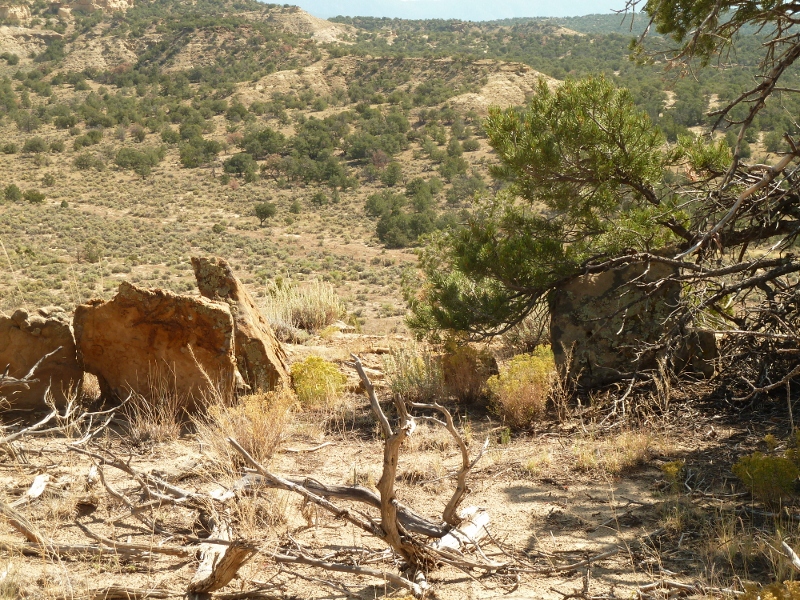 As we continued along the cliff edge, we ran into a small butte that had remains of an old fortification. With the weather patterns being unreliable, it’s not hard to imagine that there would be times of turmoil and people would need to retreat to mesa and butte tops for safety. 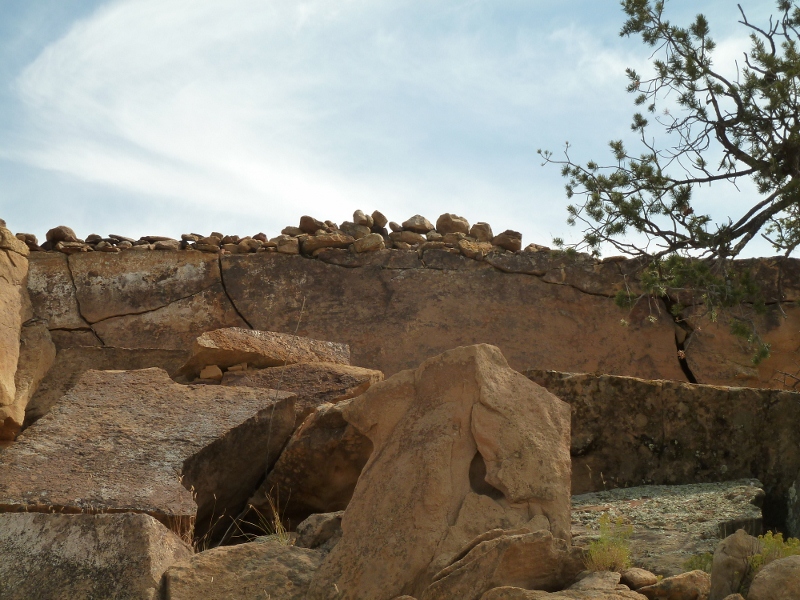 Here’s what the wall looks like from the top of the butte. 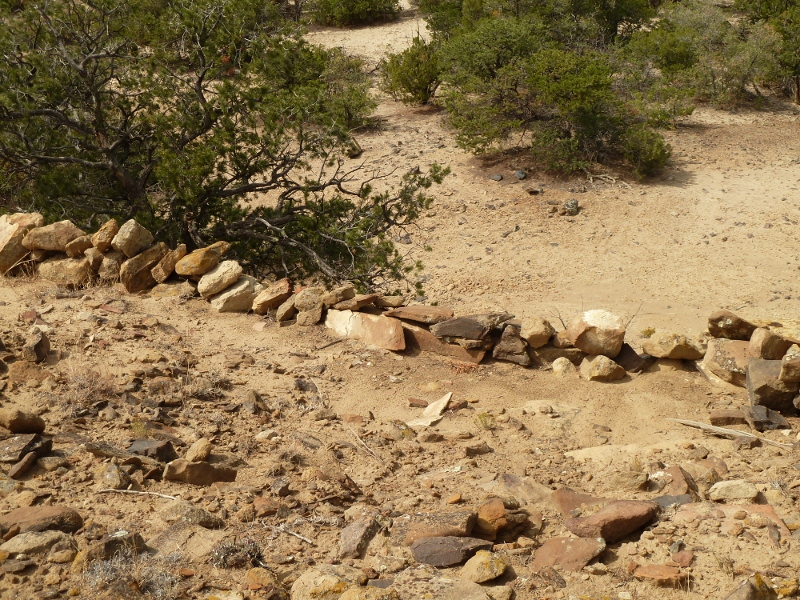 We climbed to the top of another butte and found a site that was dug by a pothunter many years ago. 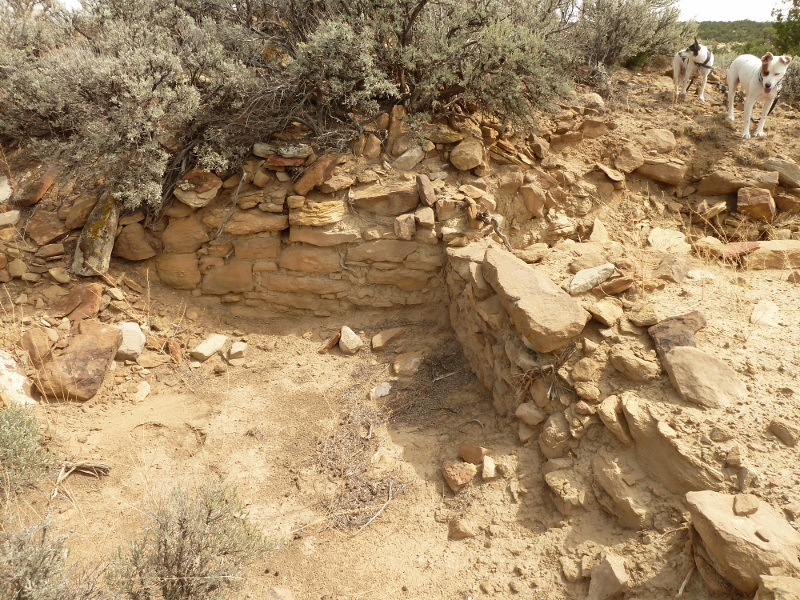 We saw this butte from where we were, but when we got to the top of it, we found that it was too small to have a site. 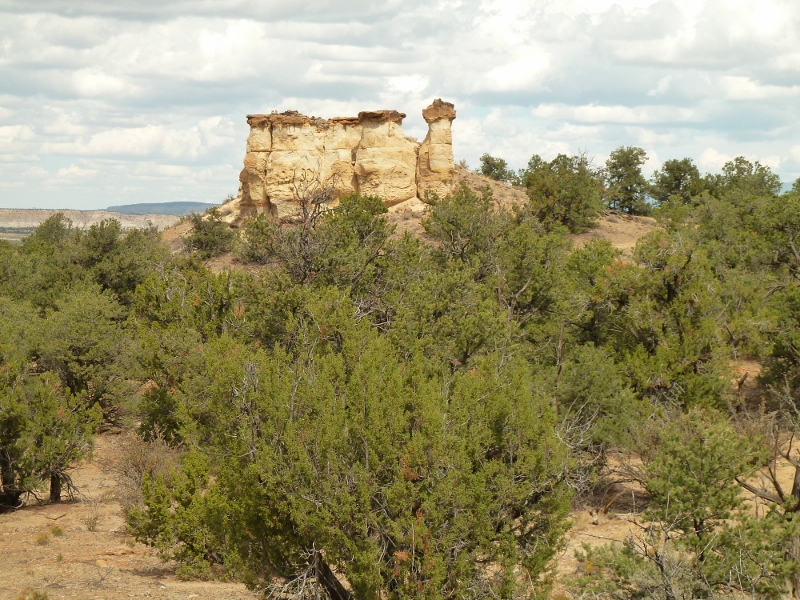 But archaeology sites were not all we found. We had beautiful skies, amazing landscapes, and incredible views in all directions. And the quiet was amazing. It was so quiet you could hear the flapping of a bird’s wing. When we sat down to eat some lunch, we had this view in front of us. 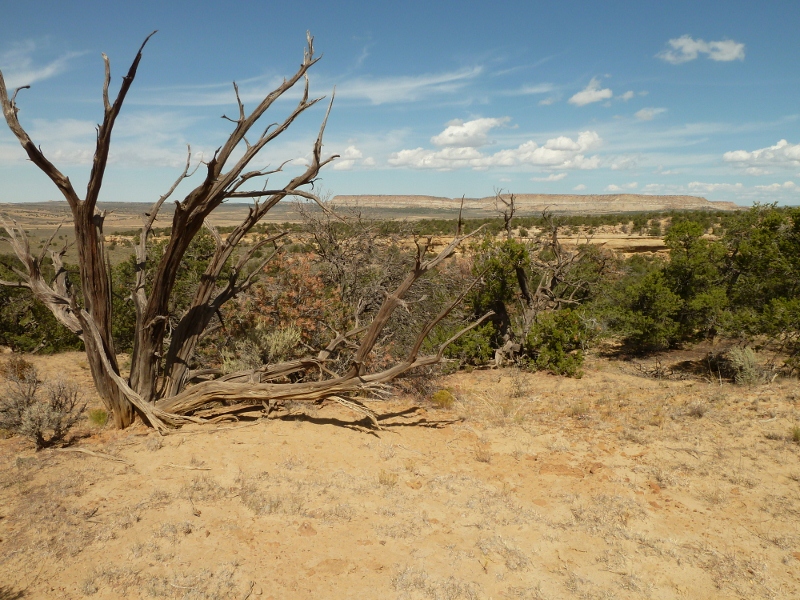 And this colony of Cryptobiotic soil behind us. (Be careful not step on a colony when you see one.) 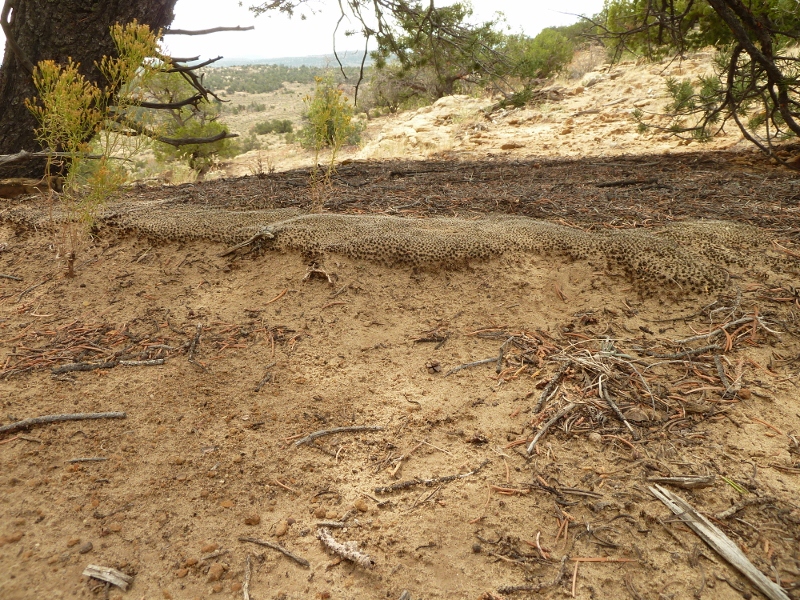 As you can see, wandering in the backcountry is a bit different climbing stairs in Los Angeles. They’re both great, and even better they are both available to everyone.