The book, Pilgrim at Tinker Creek, is a very personal narrative that is not about the author. Annie Dillard does not tell us about her life or what she thinks about the burning issues of the day. She only offers an almost lyrical weaving of facts and her actual observations to present a sometimes startling portrayal of the natural world around us and our role in it.

On the very first page of the narrative she writes of an old tomcat that would come into her bedroom at night, knead her chest with his front paws, and then leave bloody paw prints on her chest that looked like rose petals. Four pages later she tells us of a giant water bug injecting a frog with an enzyme to dissolve its tissue and then actually seeing the frog disappear right before her eyes as the water bug sucked the life out of it. The book doesn’t quit there; it keeps that pace all the way to the end.

If you look back at the summer of 1973, America’s involvement in the Viet Nam War was coming to an end and the unfolding Watergate scandal was dominating the nightly news. Yet like all burning issues, these have faded away like a blip on a radar scope, only to be replaced, many times over, by a new burning issue. Yet if you were to pick up a copy of Pilgrim at Tinker Creek today and read it, it would still be fresh and ring true. 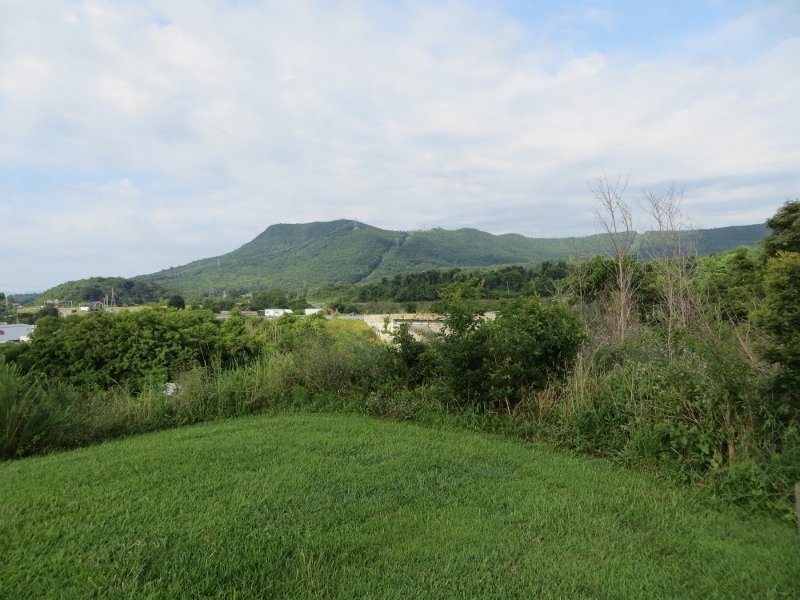 And a few pages later she tells us about the sunset lighting up Tinker Mountain. “I can’t see Tinker Mountain through the line of hemlock, till it comes on like a streetlight, ping, ex nihilo. Its sandstone cliffs pink and swell. Suddenly the light goes; the cliffs recede as if pushed.”

With that description I knew I had to get back to that part of Virginia someday and take a hike in the area that inspired Annie Dillard to write Pilgrim at Tinker Creek. Last month my dog Petey and I were there.

Before hiking I wanted to see if we could find the area of Tinker Creek where Annie Dillard lived. I had some help from a New York Times article, written eleven years ago, that I found on the Internet. (Click here if you would like to read the article.) The article does not give an address, but it does describe the general vicinity. With the article as a guideline we drove to the Hollins College (now University) area.

We turned into a residential neighborhood on the opposite side of the road from the University. There we found a quiet suburban-like setting of red brick homes built sometime around 1960. The homes now have mature landscaping and are well kept. They are not ostentatious but are still very nice.

As we meandered through the streets, we finally found Tinker Creek. When we slowly drove over Tinker Creek on a very narrow bridge, a blue heron flew up from the creek and settled back down in the creek twenty yards further away from us. We turned down the street that parallels the creek and I saw an older man taking a morning walk along the street. Depending on how long he had lived in the neighborhood, he might have known Annie Dillard!

I drove past him and then got up the nerve to turn around and talk to him. I asked him if this was the same street where Annie Dillard lived. He told me that Annie lived right up the street and that she would often go into his backyard to look at the creek. He said I was welcome to go back there and walk along the creek.

We walked through his backyard and he told me about a tree that he used to have that had a big branch hanging over the water. He said that Annie would climb on that branch just to look at the creek. He would often get home from work and his wife would tell him how Annie was hanging on the branch for over two hours that day. 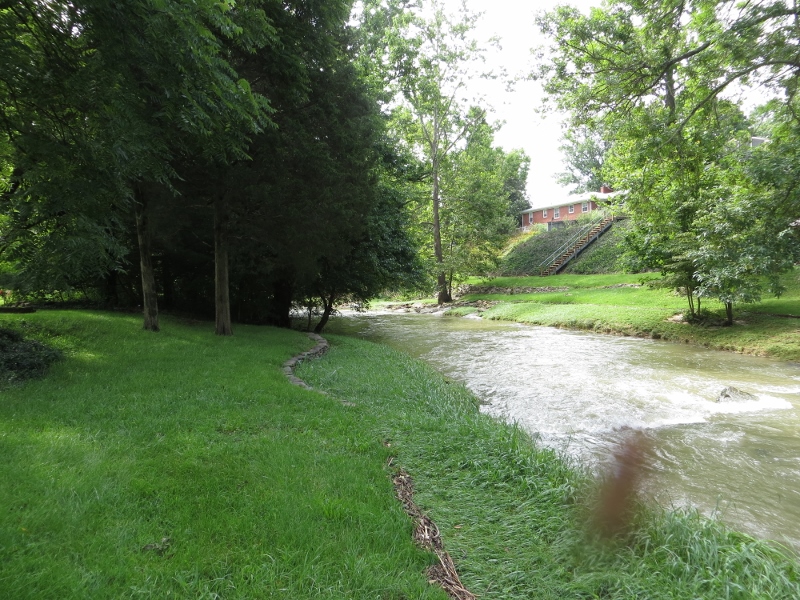 The tree where Annie would watch the creek would have been right in front of us.

Maybe Annie Dillard is telling us what we already should know – that the natural world is everywhere, even in our own backyard. All we have to do is to let ourselves see it. 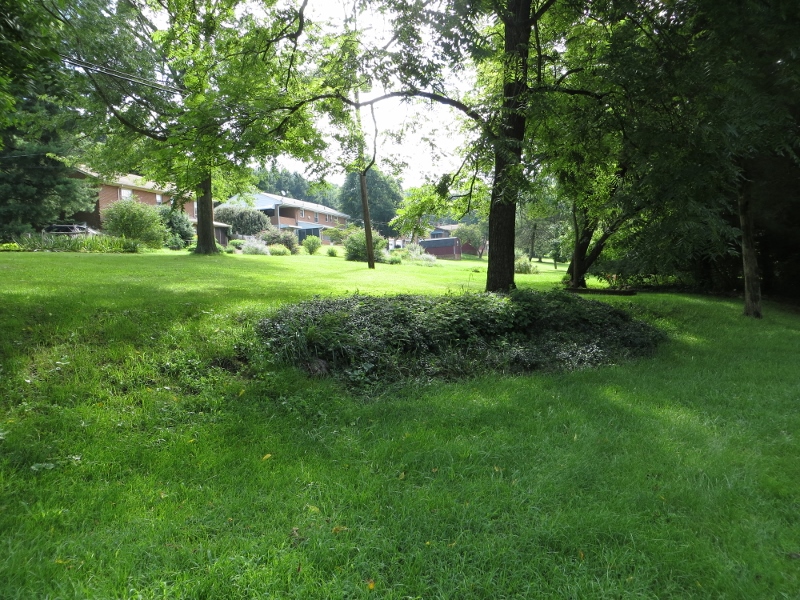 There was a small dam behind his house and I wondered if that was the dam Annie Dillard mentioned in the book. I asked him about the dam. He said that before there were houses, there was a farm that occupied both sides of the creek, and that the farmer built a road/bridge through the water to connect the two sides of the farm. What’s left of that road is now the small dam. 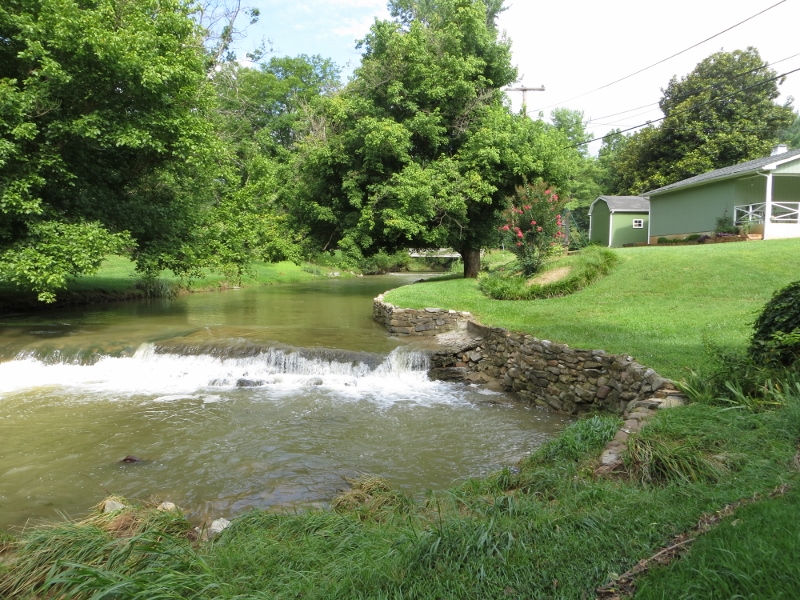 The dam at Tinker Creek. The bridge where we saw the heron is upstream.

I wonder if part of that farm was still active when Annie Dillard was wandering around the neighborhood. (The homes on the other side, and a bit removed from the creek, do seem much newer than the homes on her street.) Perhaps the steers in the creek that she wrote about came from that farm.

When we got ready to leave the backyard I thanked the owner profusely for his hospitality, and he told us that Annie Dillard’s husband of that time, Dr. Dillard, still lives in the neighborhood and that he has turned his yard into a natural habitat. And sure enough as we drove out of the neighborhood, we passed a house with natural habitat signs. 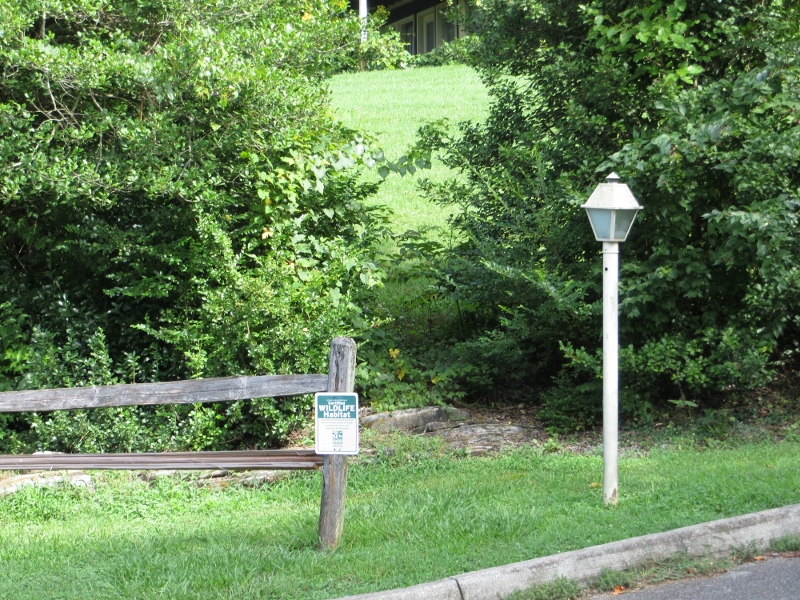 Part 2 of this blog post will go into our hike on the Appalachian Trail near Tinker Creek.