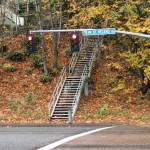 Public stairways are featured in The Gentle Art of Wandering because they are perfect for wandering and exploring in the urban environment. A little over a week ago I had another chance for a stair wandering adventure when I visited my daughter’s family in Portland, Oregon. It started when my daughter mentioned to me that she noticed some stairs along U.S. 30 in the Linnton neighborhood of Portland. Before she had a chance to change her mind, we were on our way to check them out.

We spotted several stairways along U.S. 30 and parked the car when we saw a set of stairs at 107th Avenue. Before venturing up the stairs we took a couple of minutes to read a set of signs at the base of the stairs that told the story of Linnton. 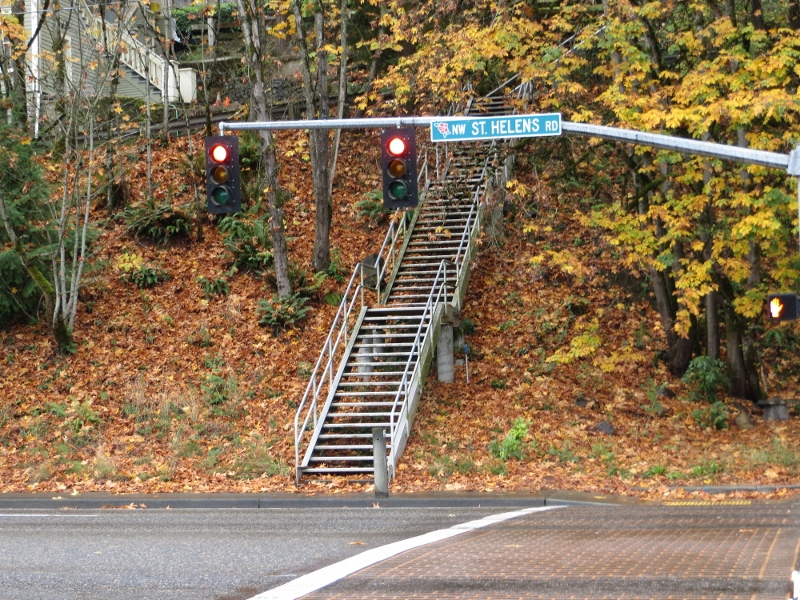 These are the stairs at 107th Avenue and U.S. 30 (St. Helens Road). The descriptive signs are to the right of the stairs. There is also a bus stop to the right if you want to make your adventure entirely on foot.

The first section of steps was metal. They changed to concrete after the first street crossing. The steps ended at the third street. According to PublicStairs.com (click here), this stairway has 176 steps. 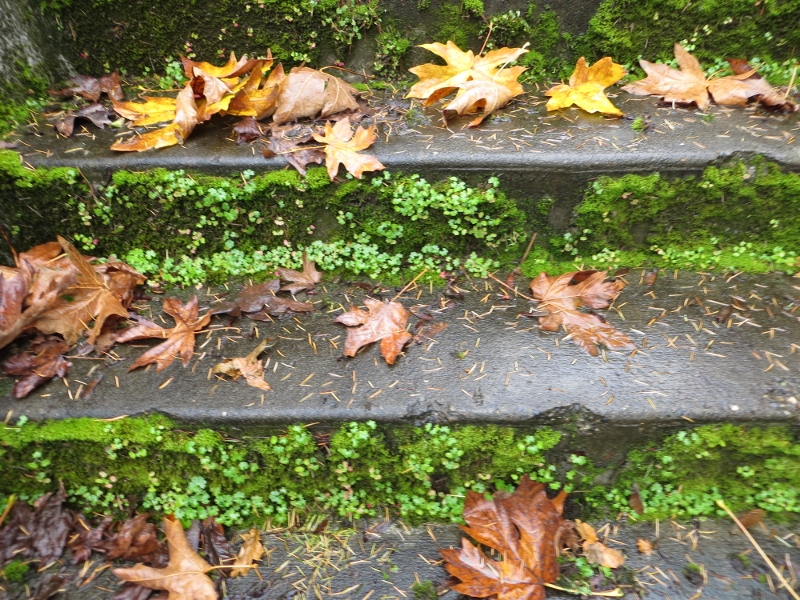 The moss was sprouting on the moist steps.

We then turned left and followed the street past a Dead End sign. At the end of the street there was a leaf covered path that took us into a green wonderland of moss covered limbs and huge trees. 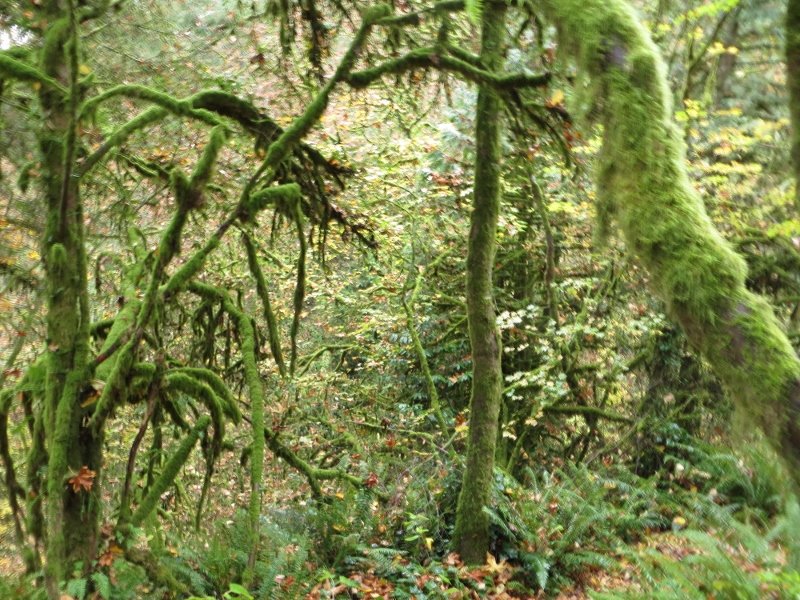 Here is an example of moss covered limbs in a green wonderland. What a shock to leave the road and step into the woods. 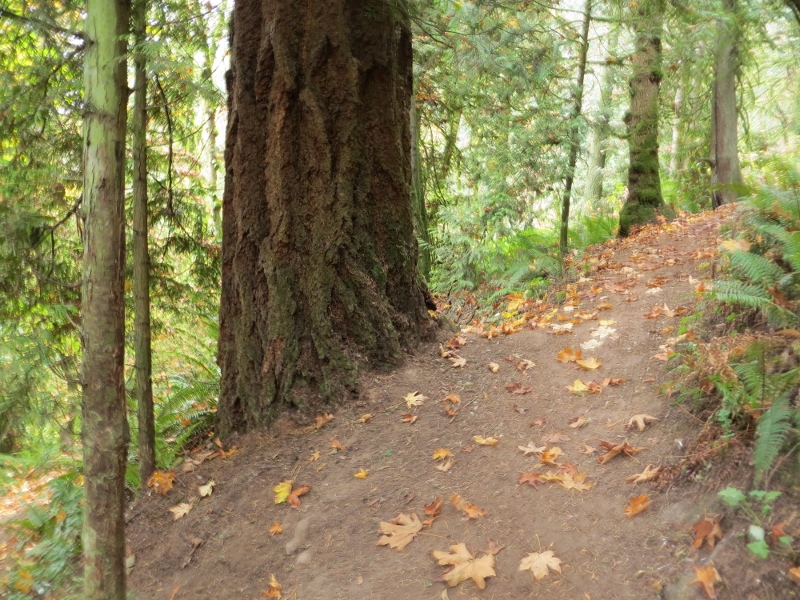 It would take three of you to get your arms around this tree.

The path followed some switch-backs down a ravine, crossed a small footbridge, and then went up the other side of the ravine. We stopped walking when the trail reached a gravel road. A trailhead sign identified the intersection as Fire Lane 10 and the Linnton Trail. 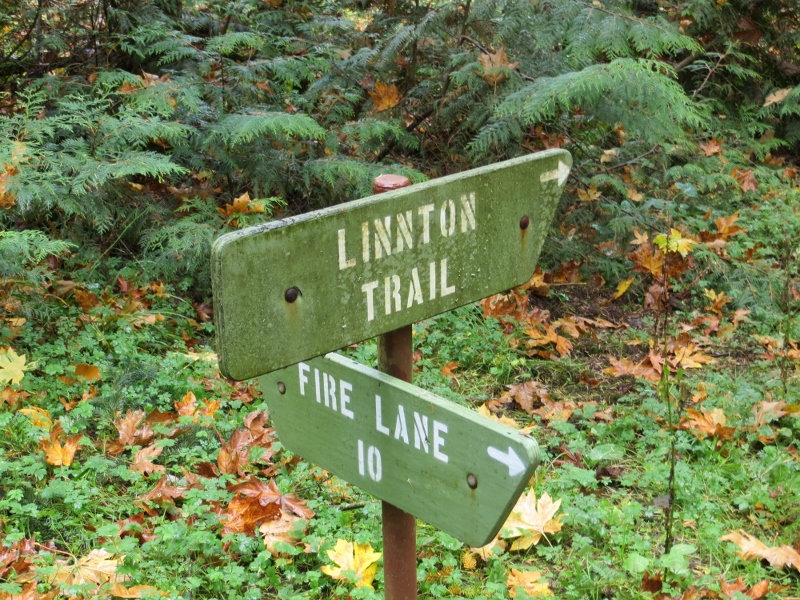 From here we went back down the Linnton Trail.

We turned around and backtracked down the trail to the footbridge. Instead of going back up the other side of the ravine, we followed a trail downhill along the water course towards U.S. 30. There we found another trail following the road. It soon led to another set of metal steps. 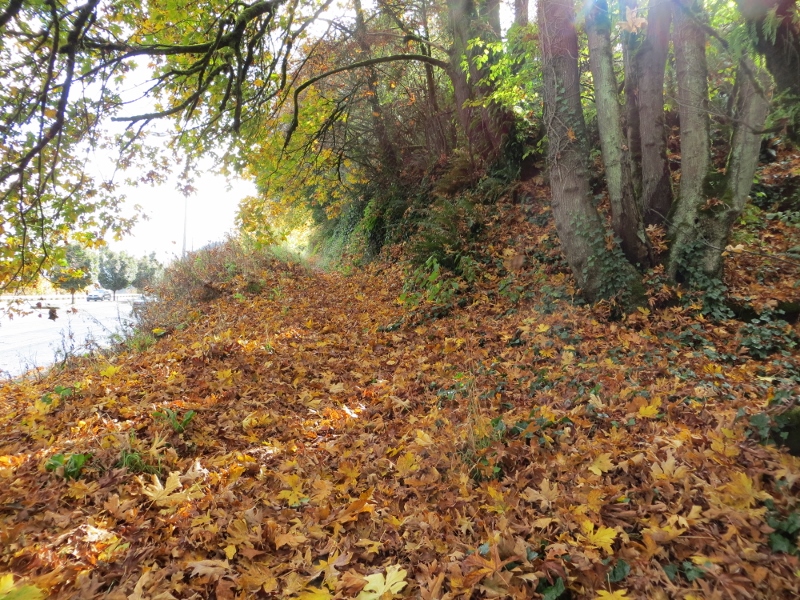 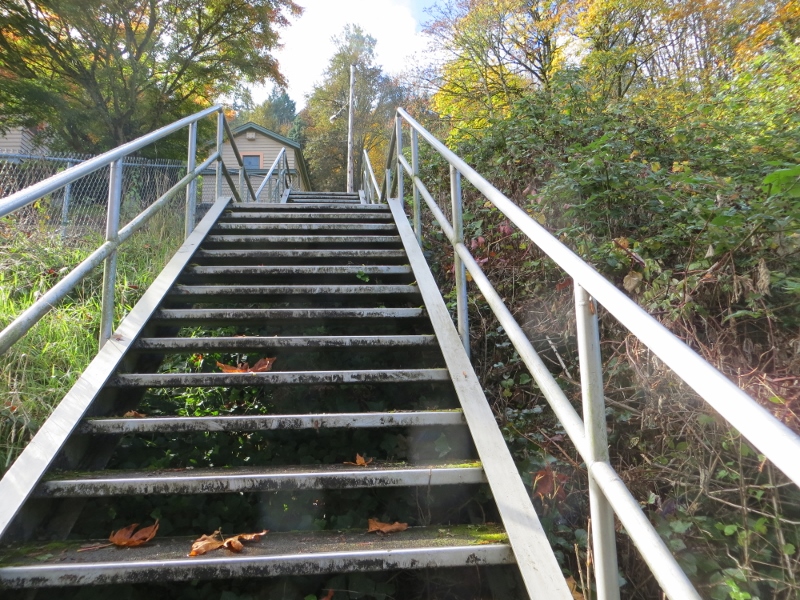 The trail connected a bus stop on U.S. 30 with these steps.

These steps took us to another street where we had a great view of the Willamette River and found several interesting yard decorations. As we continued we found more stairways and many other interesting things along the way. 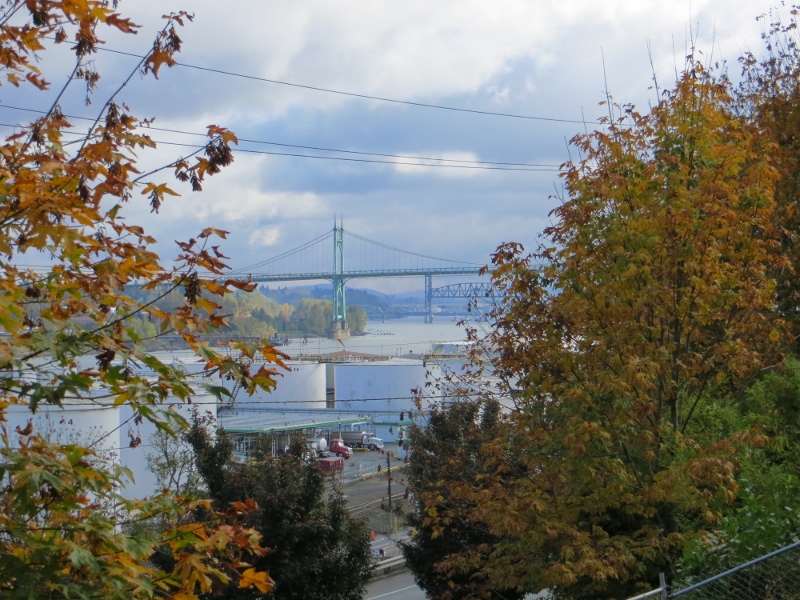 We had this view of the Willamette River from the top of the stairs. 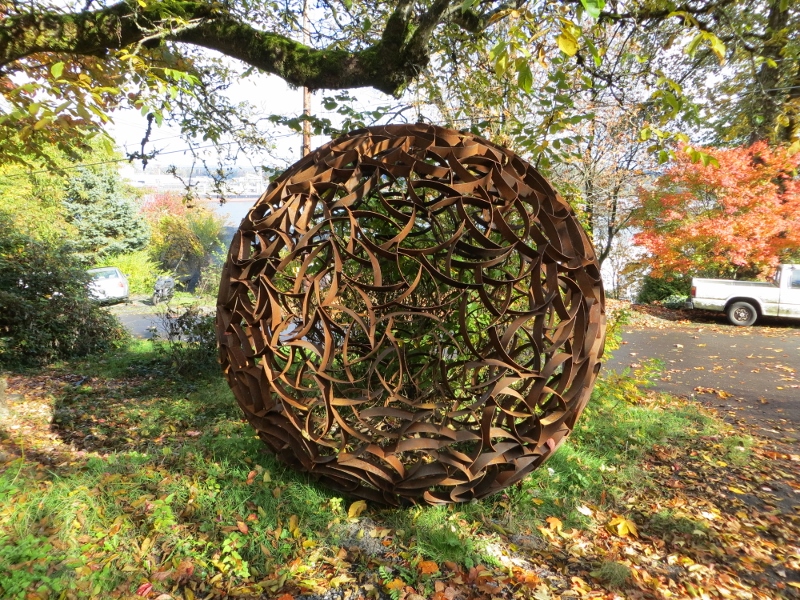 And this was just down the street. 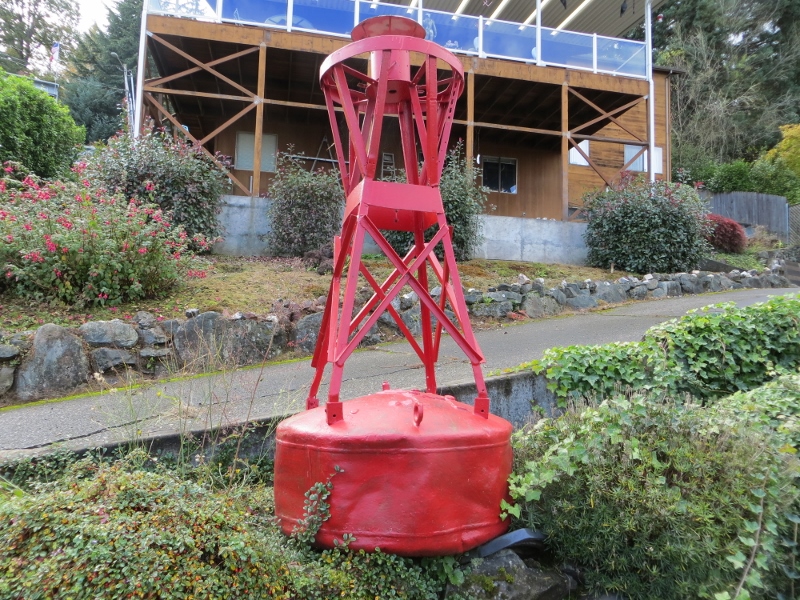 And this was just a little further along on the walk. 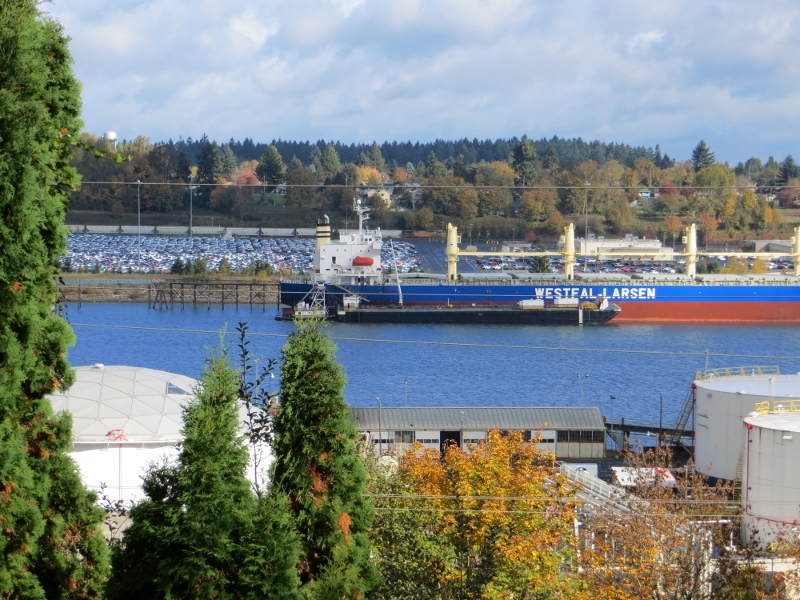 Throughout this portion of the walk we could catch glimpses of the river.

Since this was a spontaneous walk and we did not have all day, we had to head back to the car. On our way back we found more stairs to climb including a set that led to old school that is now a very nice housing development. PublicStairs.com identifies these stairs as the Linnton School Stairs with 106 steps. 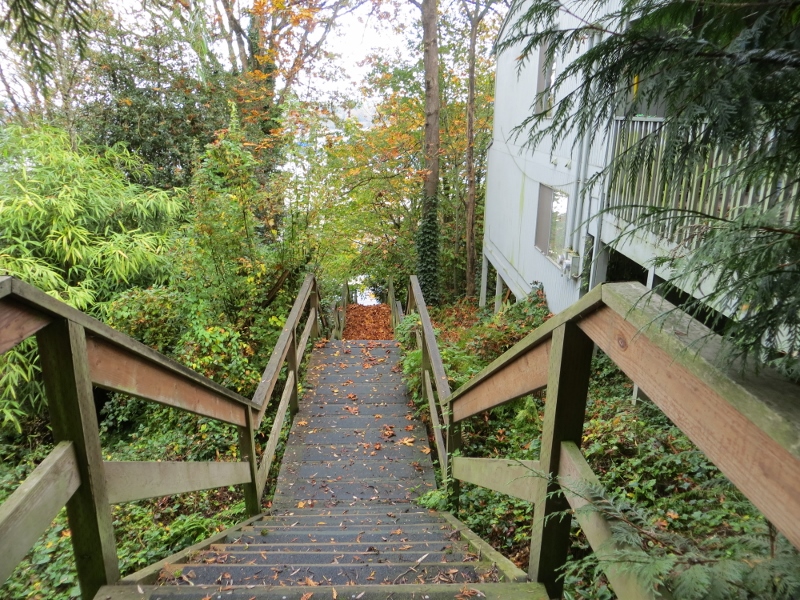 We found these stairs on the walk back to the car. 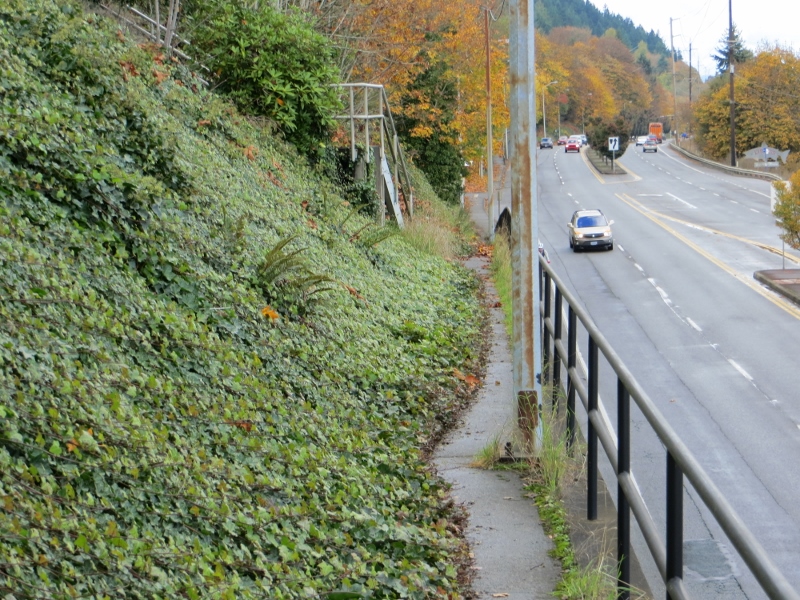 The sidewalk along U.S. 30 was like a trail. Another set of stairs are up ahead. 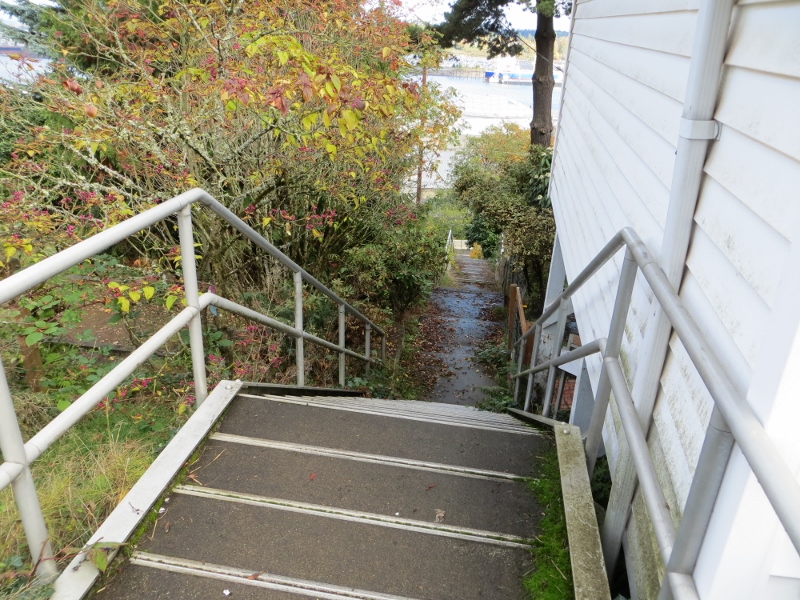 Those stairs led us to another area to explore. 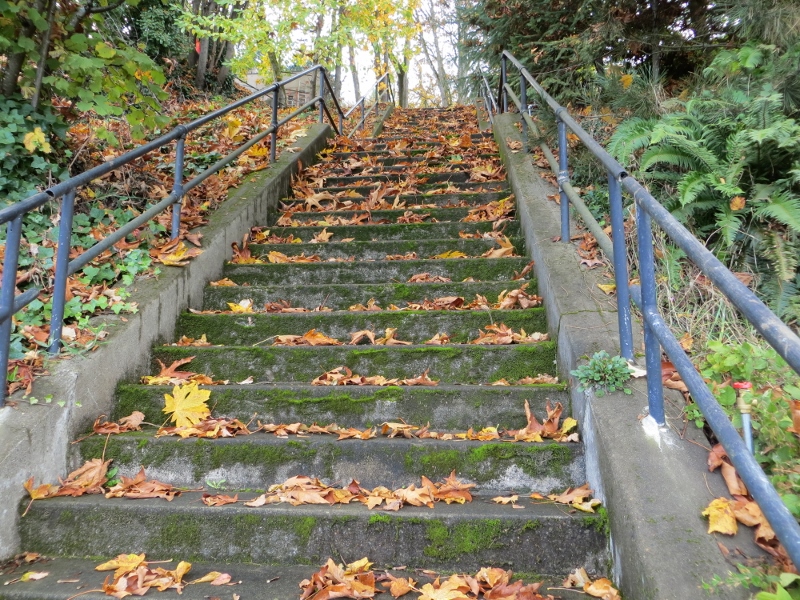 These are the Linnton School steps that we found on our way back to the car. 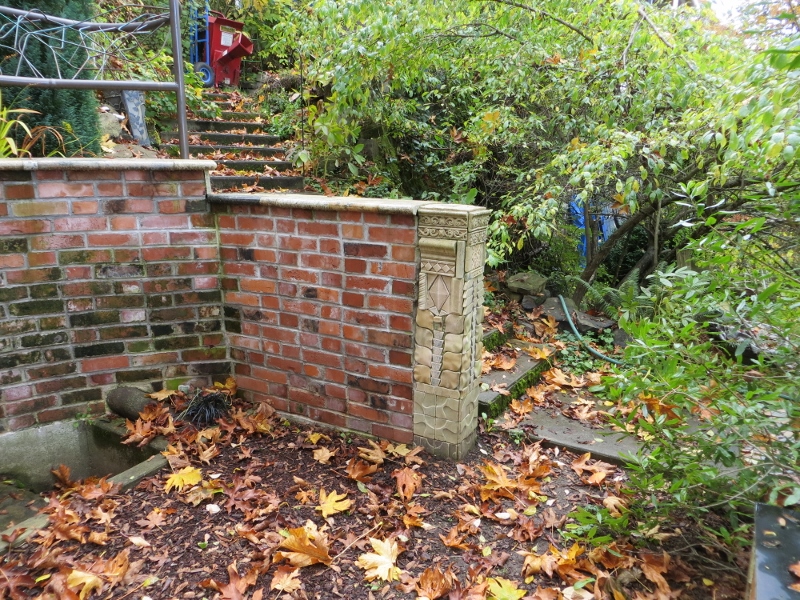 We saw this terra cotta detail along the Linnton School steps.

Since the other stairways we climbed were less than 100 steps, they are not in the PublicStairs.com database. Because I was just wandering and letting what I saw guide me on the walk, I did not bother to count the steps or record their exact location. The stairs were there to get me out of the car and start me exploring on foot. I’m sure if you walk in the same area you’ll probably find several stairs or items that I missed. You could also connect to Portland’s network of hiking trails to make it an all-day or multi-day adventure.  And that’s why I’m looking forward to my next walk in the area.

One of the great things about wandering is that you’ll always find something to keep you wanting to come back.