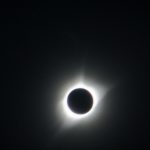 A little more than two years ago I wrote a post in this blog about the upcoming August 21, 2017 eclipse. (Please click here to read that post.) August 21, 2017 finally came last week and the total eclipse of the sun was awesome. There is nothing in this this world the same as a total eclipse, and I hope you had the opportunity to see it in person.

My original plan for experiencing the 2017 eclipse was to have no plan and hang loose for the best cloud-free sky opportunity. But when I spoke to my brother in California a couple of months ago, he mentioned to me the difficulty that he was having in finding a place to watch the eclipse in Oregon.

As soon as I hung up the phone, I started checking online for motels in Wyoming and Nebraska and discovered that almost all of the rooms had already been booked and that the few rooms that were still available were going from $400 to $1000. Rather than pay that, I booked a room for the night before the eclipse at a Motel 6, a couple of hours south of the eclipse centerline, in Fort Collins, Colorado. The room only cost $80.

With a room in Fort Collins I figured we could easily get to Wyoming or Nebraska to watch the eclipse. As insurance, I even paid $15.00 for a parking space at the rodeo grounds in Alliance, Nebraska.

As eclipse day got closer, I began studying the weather forecasts for Alliance and other nearby towns. What had been forecasted as a sunny eclipse day in Alliance began to be forecasted as partly sunny, then as partly cloudy, and finally as mostly cloudy. With that bit of unpleasantness, I took a closer look at the weather forecasts for other towns. It seemed that Glendo, Wyoming (where the centerline of the eclipse was to cross Interstate 25) might be a better bet.

On the morning of the eclipse, we were up at 2:00am and on the road by 2:30. Before leaving, we took one more look at the forecast and decided to head north on Interstate 25 toward Glendo. (It turned out that Alliance also had an unobstructed view of the eclipse.) 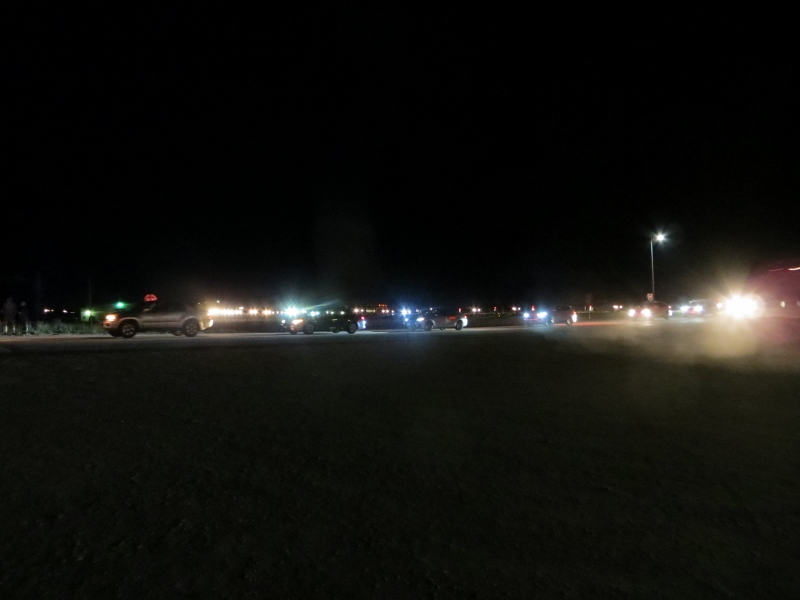 Here’s the traffic pouring into Glendo at 5:00am.

Fortunately for us, the gas station at the bottom of the ramp was open. We decided to fill up the tank before the station ran out of gas. While filling up the gas tank an attendant at the station said that they had parking in a lot just beyond the station for $20. Rather than getting back in the traffic, we gladly paid the $20 and parked the car.

When the sun came up a couple of hours later, we took a walk with the dogs around the town. It was like a huge festival. There were fields packed with tents and RVs everywhere. And the traffic was still pouring off the highway. Fortunately, there were still empty fields to absorb the new arrivals. 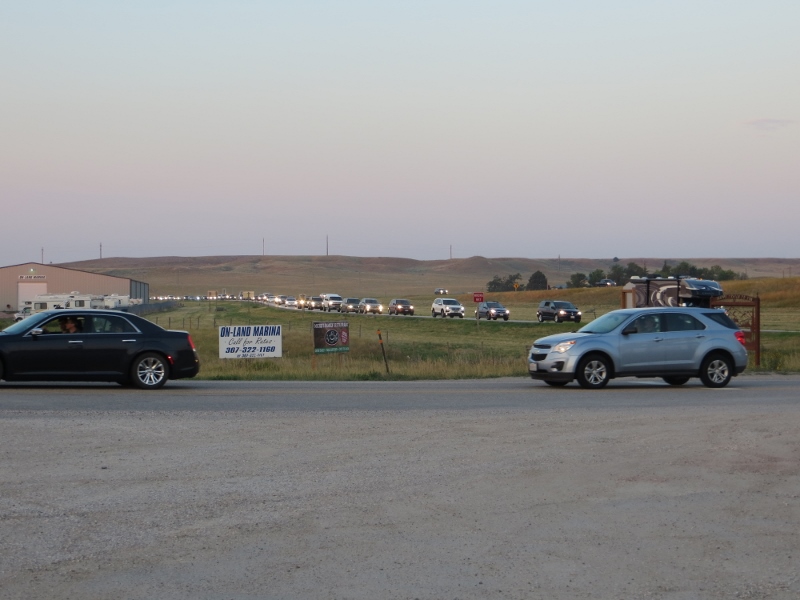 As you can see, cars were still coming into town at 7:00am. 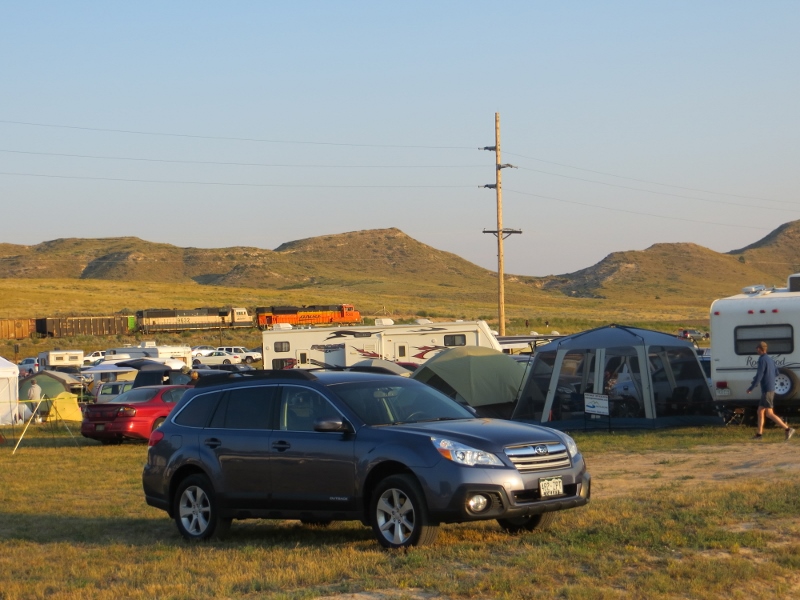 Fortunately, Glendo had plenty of places to put cars. 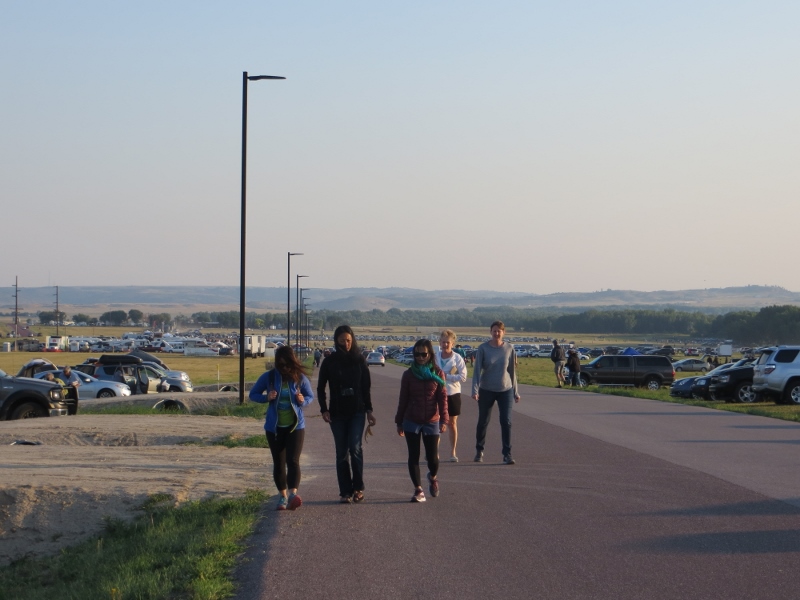 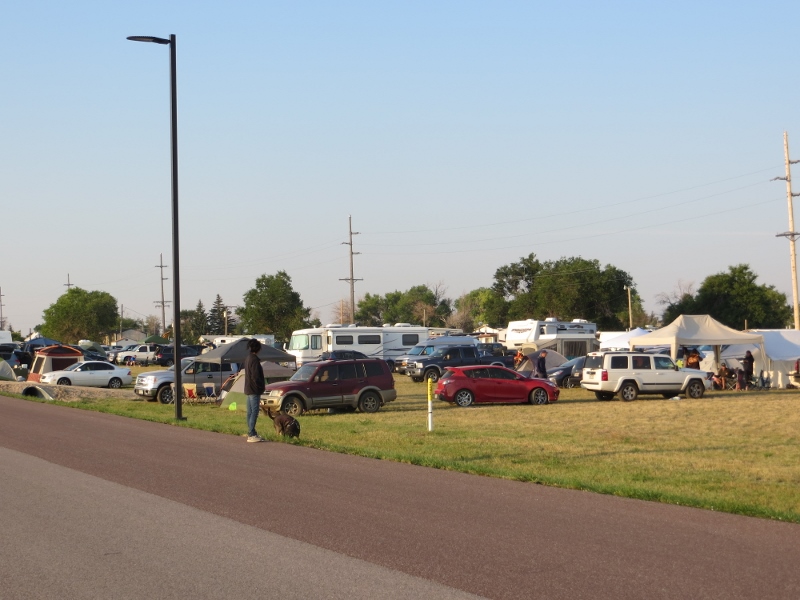 Despite the congestion everyone was in a great mood. The town had done a fantastic job to make sure that there was plenty of room for people to enjoy the eclipse, vendors to serve food, one or more portolets at every corner, and sufficient personnel to keep the traffic moving in an orderly fashion. One of the vendors told us that the town had spent the past two years preparing for eclipse. 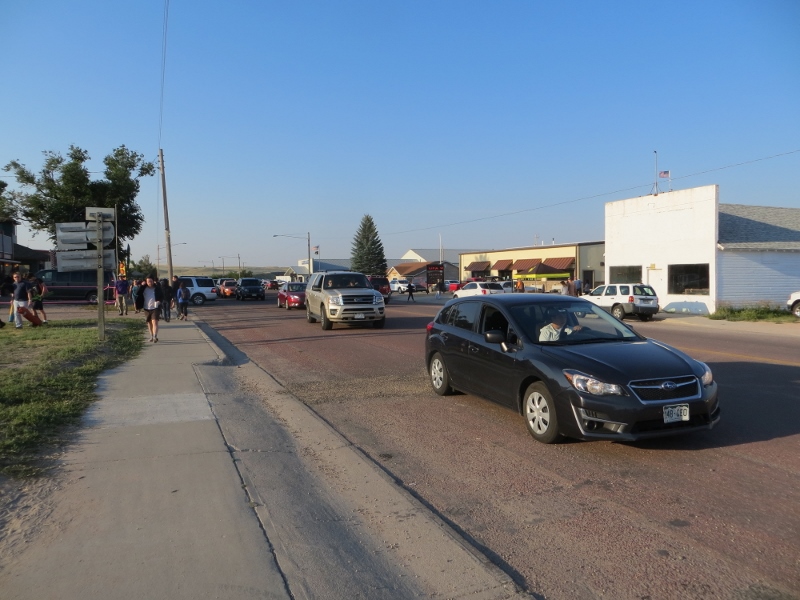 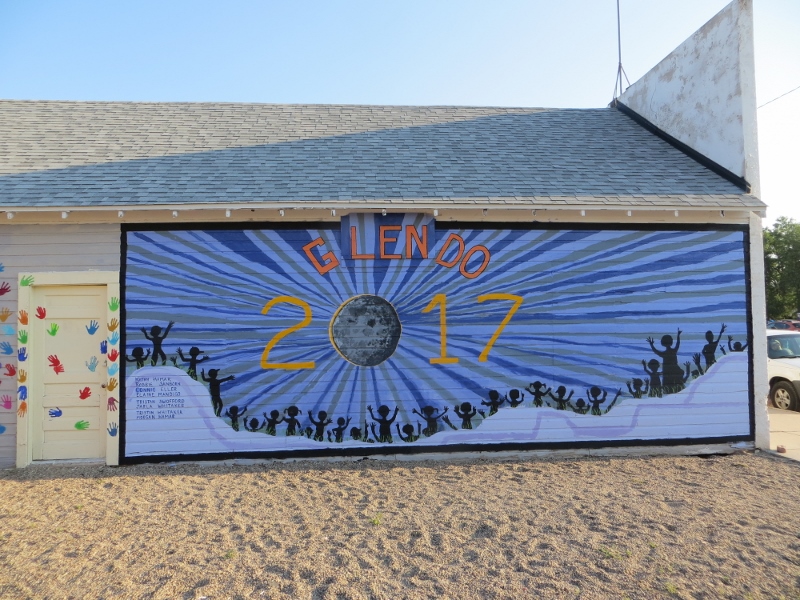 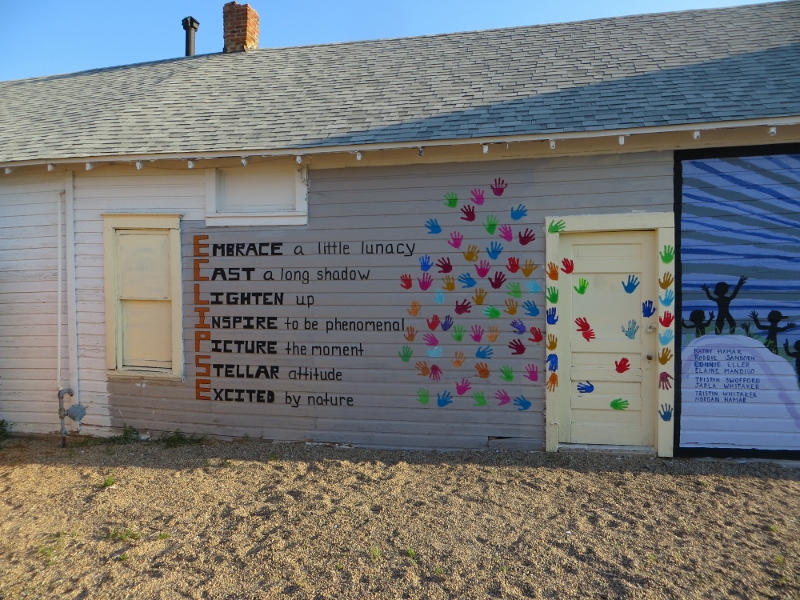 As the eclipse approached, traffic was still backed up on the highway and pouring into town. People were making final adjustments to their telescopes and solar binoculars, trying out their eclipse glasses, and getting in place to watch the eclipse. And then at around 10:25, all eyes were on the sky as the moon made its first contact with the sun. It was coming in at one o’clock on the sun’s face and slowly working its way to seven o’clock to cover the sun. 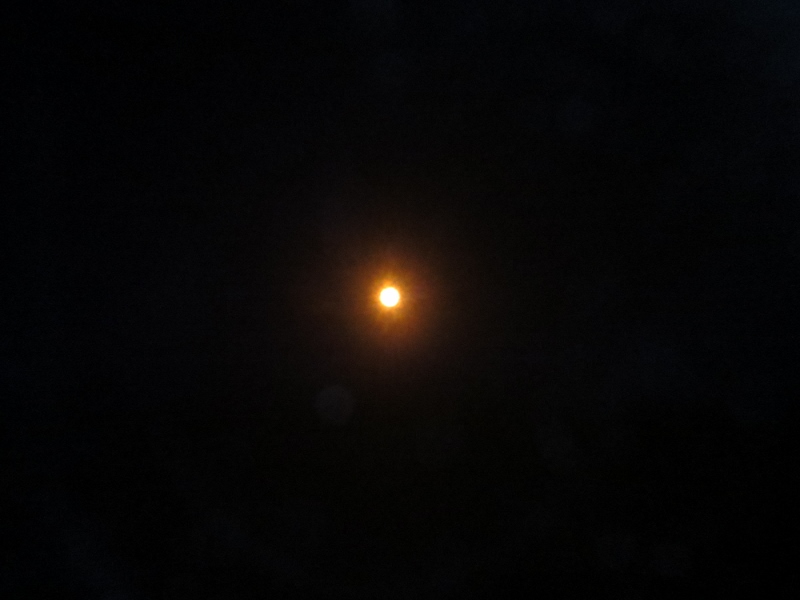 Here’s what the sun looked like before the eclipse through my eclipse glasses. 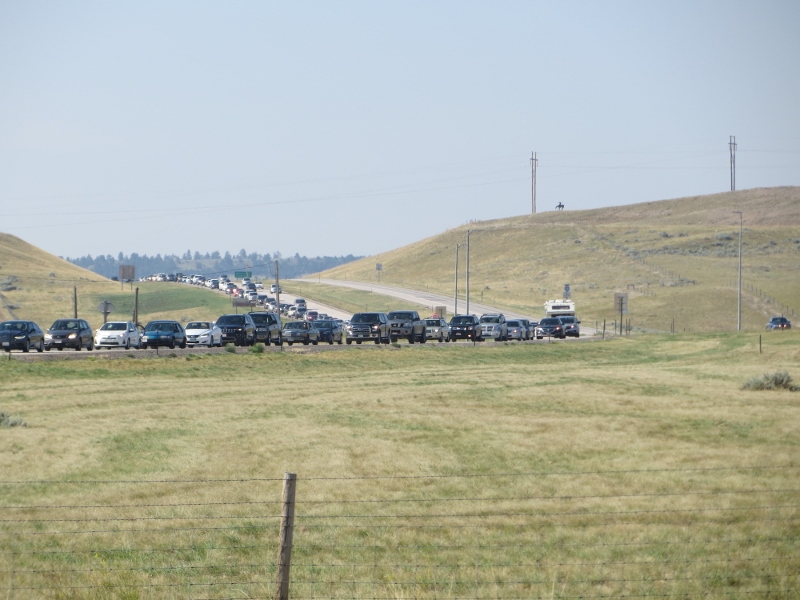 Traffic was still backed up just before the eclipse started. I know that if I were still on the road I would have been getting very anxious at this moment. Fortunately for us, we got an earlier start.

At first there wasn’t much to notice. But as the moon kept moving to cover more of the sun, the light began to change. It became bluish, perhaps, indigo. Eventually it became darker and started to cool. A light breeze started to pick up. But even at one minute before totality, there was still enough light outside to read a book or to get around easily. 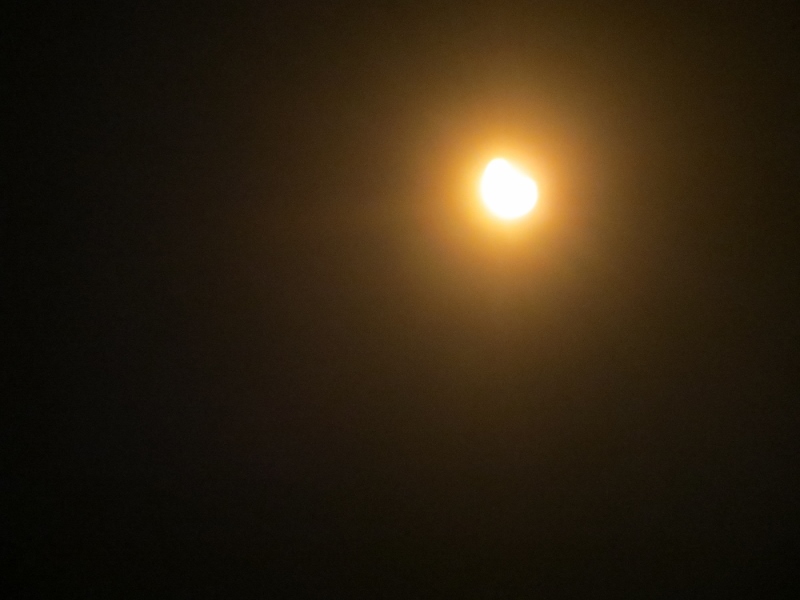 Here’s the moon starting to cross the sun. The picture doesn’t do this justice. 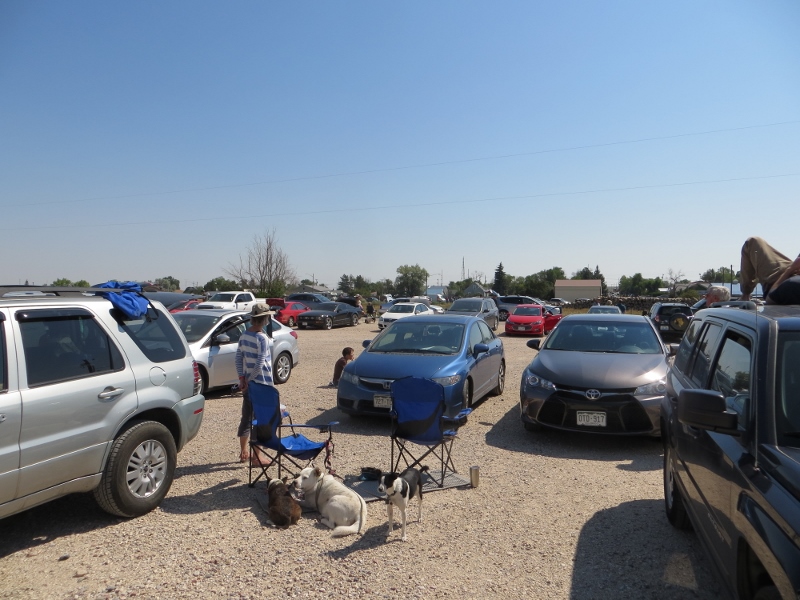 At the time of this picture, about half of the sun is being covered by moon. It’s hard to notice in this picture, but the light is turning bluish. 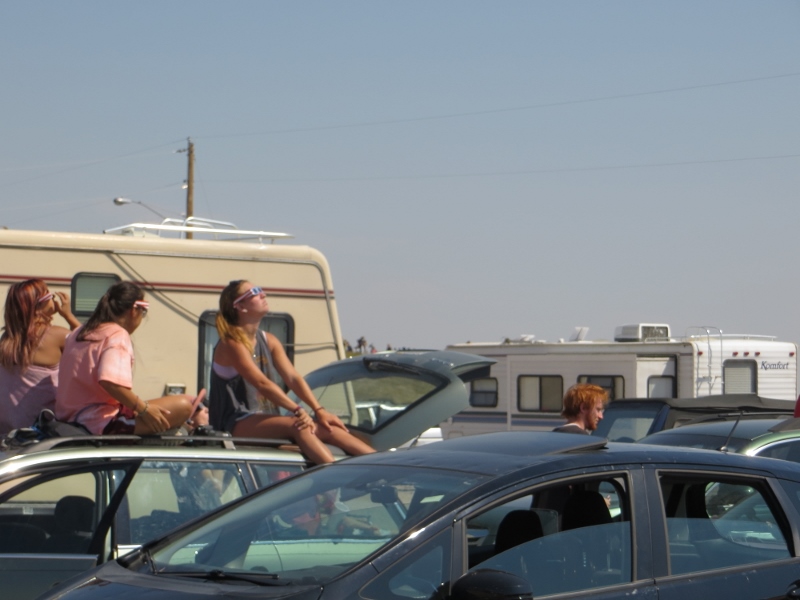 As totality approached, all eyes were on the sun. 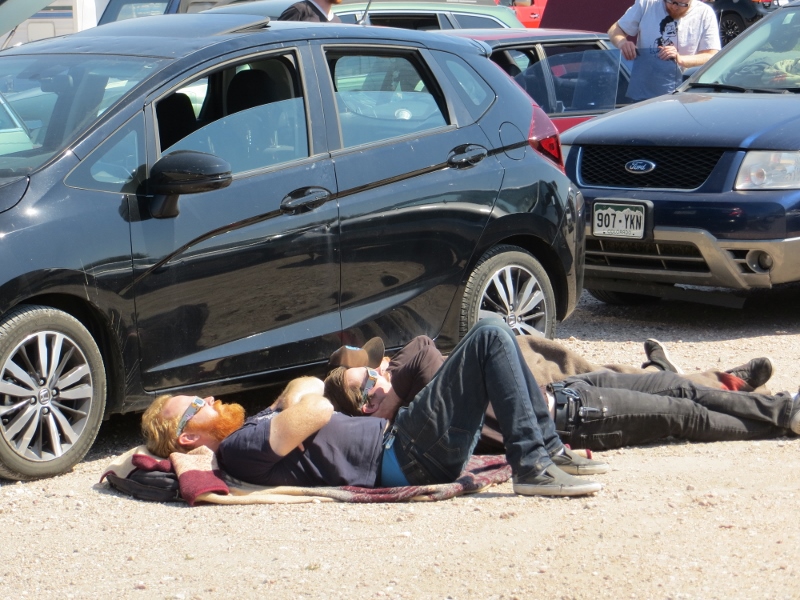 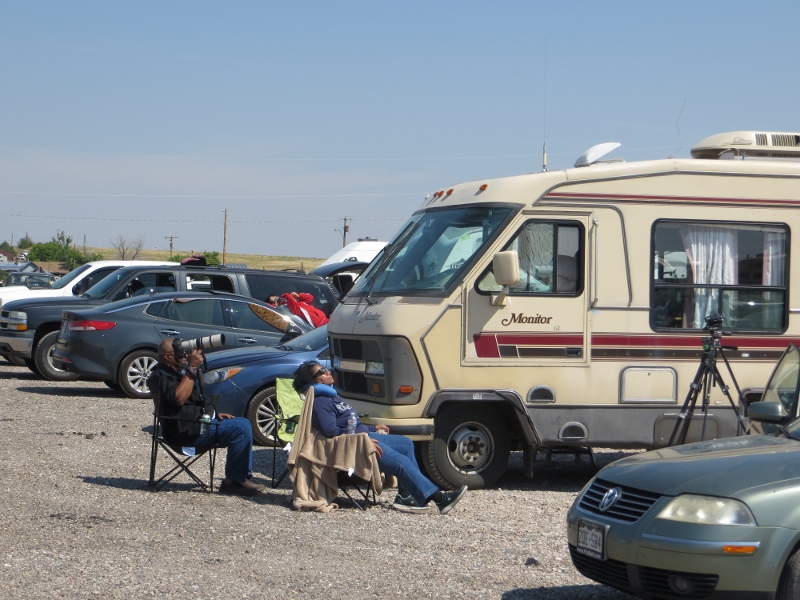 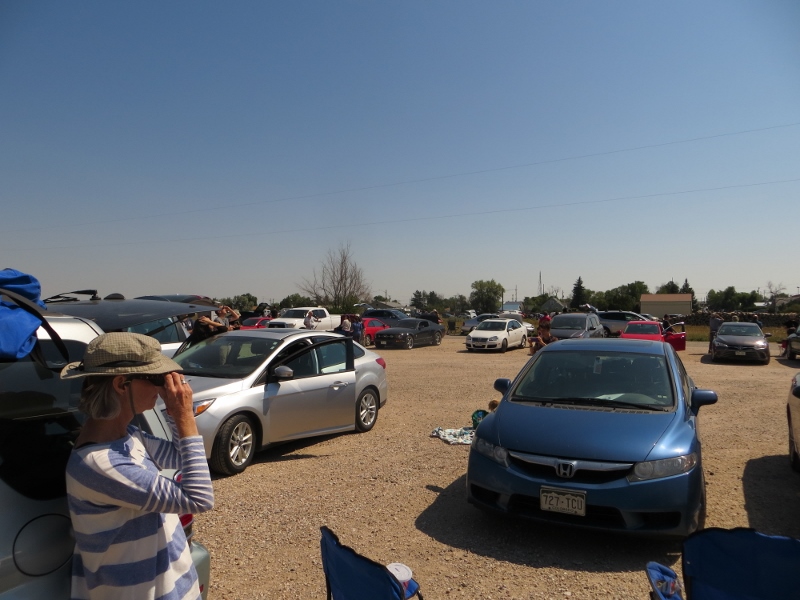 Here’s the sky with about three fourths of the sun covered. The air is definitely bluer and it’s starting to get cooler. Totality is now only ten minutes or so away.

But at the very moment of totality (at around 11:45am), like a quick snap of a finger, POW!, the lights went out. Everything changed. It was night. Our dogs were subdued. Some stars came out. Everyone started going crazy. People were screaming, jumping, clapping, and cheering. In every direction, on the edge of totality, it looked like a sunset. And out in front of us there was the sun covered by the moon. The sun’s corona was blasting out in all directions. It looked like a black disc in the sky surrounded by shimmering light. 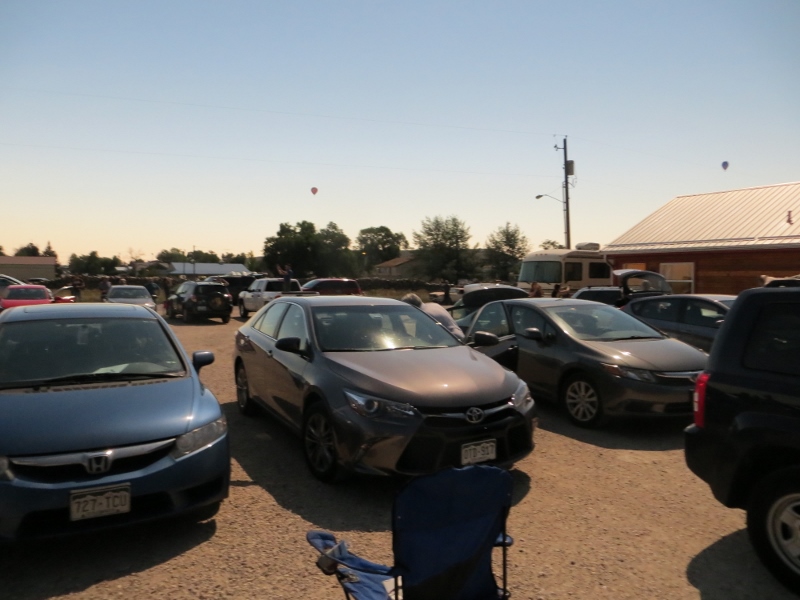 Here’s the sky a minute before totality. 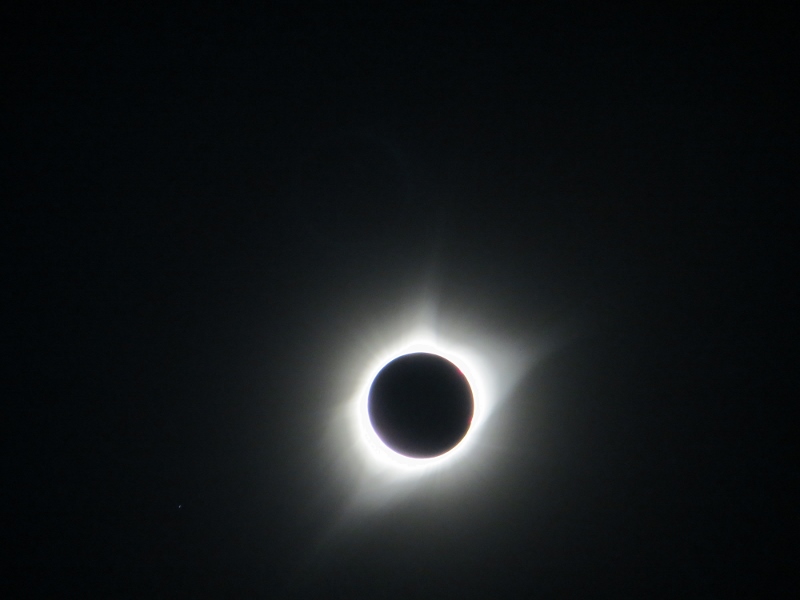 TOTALITY! This is it! At this point you can take off your eclipse glasses and look at the sun directly. 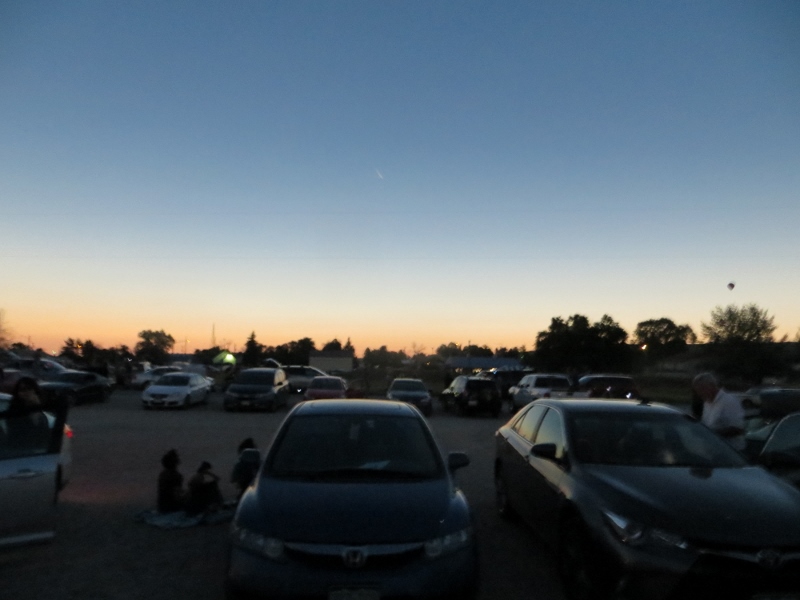 And if you look around you, you can see a sunset in any direction. A full 360 degrees!

I looked behind me and saw a drone with multi-colored lights blinking on and off in different patterns. It looked like the mother ship from the movie “Close Encounters of the Third Kind.”

And then, two and half minutes later, with one tiny pin prick of light, the sun looked like a diamond ring. It was over. The lights were back on. And in little more than an hour the moon’s path would pull completely away from the sun. 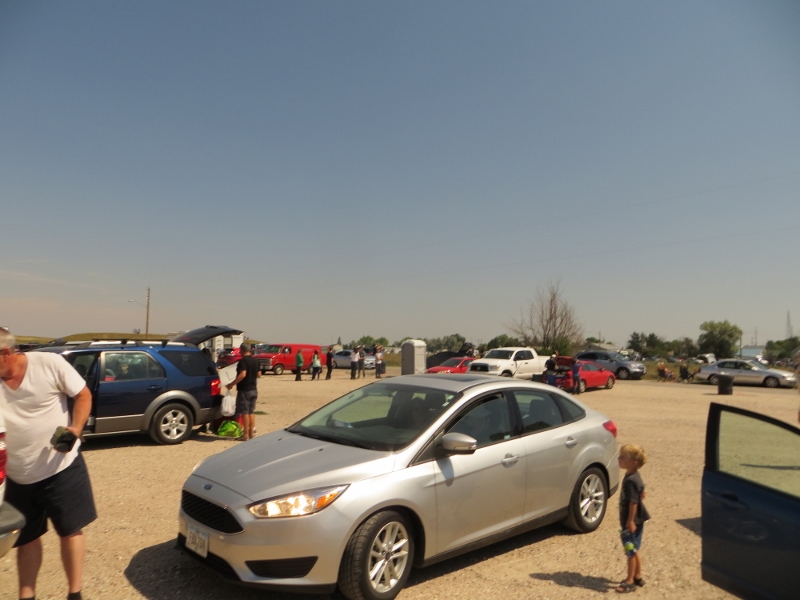 A minute after totality, it was Game Over and most people were packing up in hopes of making a quick get-a-way. 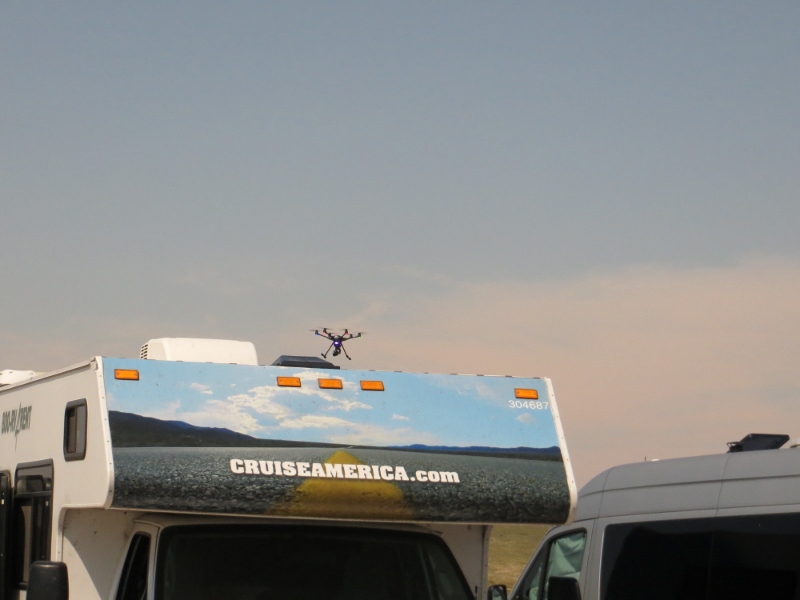 Even the drone returned to its mother ship.

That is why when you are fortunate enough to experience a total eclipse you can’t wait to do it again. I am sure that most of the people who experienced totality this year are already thinking about going to the next eclipse that will cross the United States on April 8, 2024. I hope that I’m still around to be there.

With the main event over, it was time to head back. As can be expected, with the thousands of cars that had poured into town to see the eclipse, the traffic was heavy when almost all of them poured out of town at the same time. 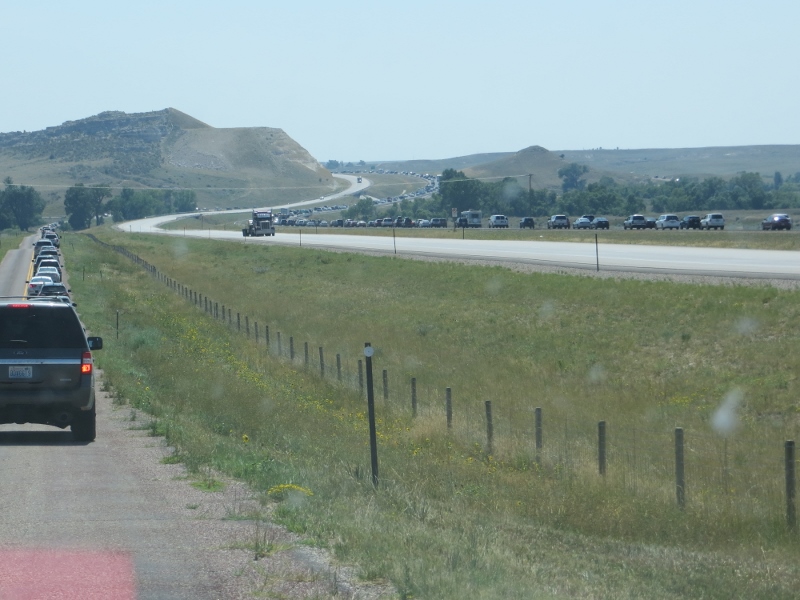 And now it was homeward bound.

Every road was packed. We decided to get off the highway and work our way east into Nebraska so we could then head south through the high plains of eastern Colorado. It took us a while to escape the traffic, but we eventually found a place to stay and got home the next day.

We didn’t mind, because experiencing a total eclipse of the sun is worth any discomfort that you may encounter along the way there or on the way home. I hope you’ll be at the next eclipse less than seven years from now. I know I’ll soon be starting my countdown.