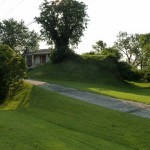 One of the principles of The Gentle Art of Wandering is that most wandering adventures start with an idea. The idea is what gets most of us out to wander. Ideas can come from anywhere, and once you spot an idea, it makes sense to write it down somewhere so you remember it.

I found an idea in the January 2011 issue of National Geographic. It was an article about Cahokia Mounds across the Mississippi River from St. Louis. The article even had a picture of the last remaining Cahokian Mound in the City of St. Louis called Sugar Loaf Mound.

As background, a little less than one thousand years ago the St. Louis area was home to an important Native-American mound building culture (Mississippian or Cahokian). The center of Cahokian culture was just across the Mississippi River from St. Louis near Collinsville, Illinois.

You can still visit many of the mounds at Cahokia State Park in Illinois. The largest mound, Monks Mound, is over 90 feet high and covers over 13 acres of land. It’s huge. 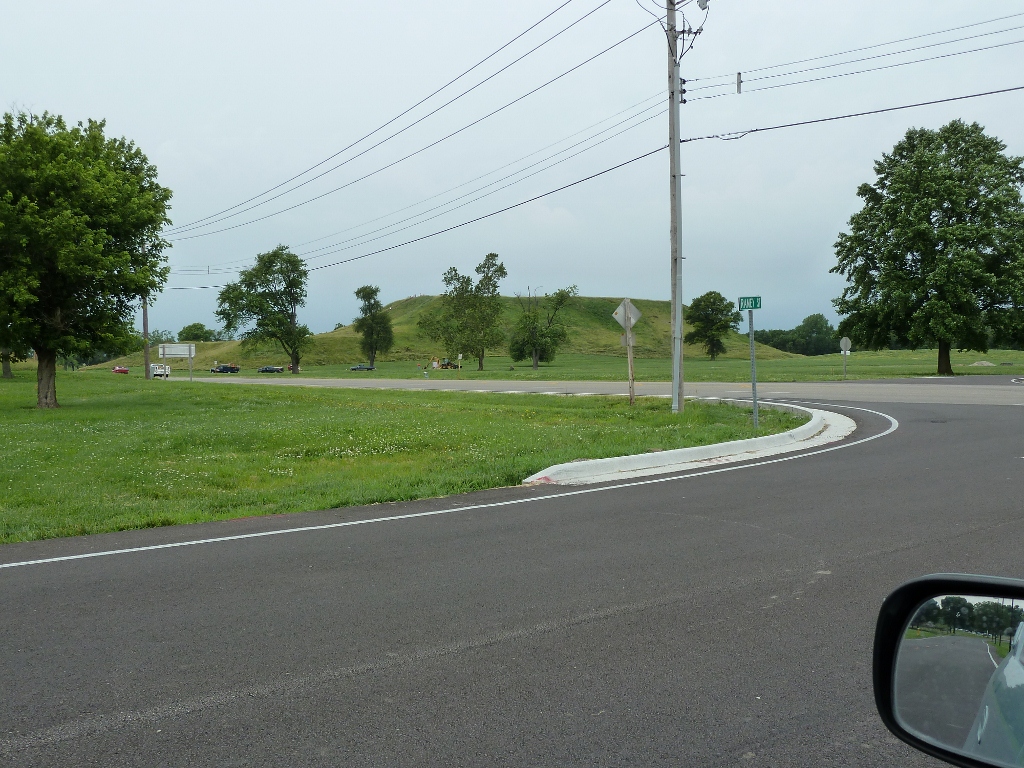 That hill in front of you is Monks Mound. It is as tall as a ten-story building. It was built almost 1000 years ago – one basketful of dirt at a time.

As for Sugar Loaf Mound in St. Louis, I had visited Cahokia several times and knew that St. Louis was once called the Mound City because of the many Indian mounds that used to be in the city. But I had never visited a mound in St. Louis and had thought that they had all been destroyed.

Needless to say, I made a point of finding Sugar Loaf Mound when I drove through St. Louis on my way to conference a little over a year ago.

There are no signs on the highway identifying the exit for visiting the mound. There is no sign at the mound telling you of its significance. In fact the mound is not very easy to find as it sits on street that is now isolated by highway construction. The street is wedged between an expressway ramp and an overgrown cliff leading down to the riverfront. If you have read The Gentle Art of Wandering, you know that these little wedges of land or “creases” can be great places for wandering.

But if you can find 4420 Ohio Street on the south side of St. Louis, you’ll find a house built on the mound. The house was bought by the Osage Indian Nation a couple of years ago. The Osage eventually plan to remove the house and return the mound to a more natural state. 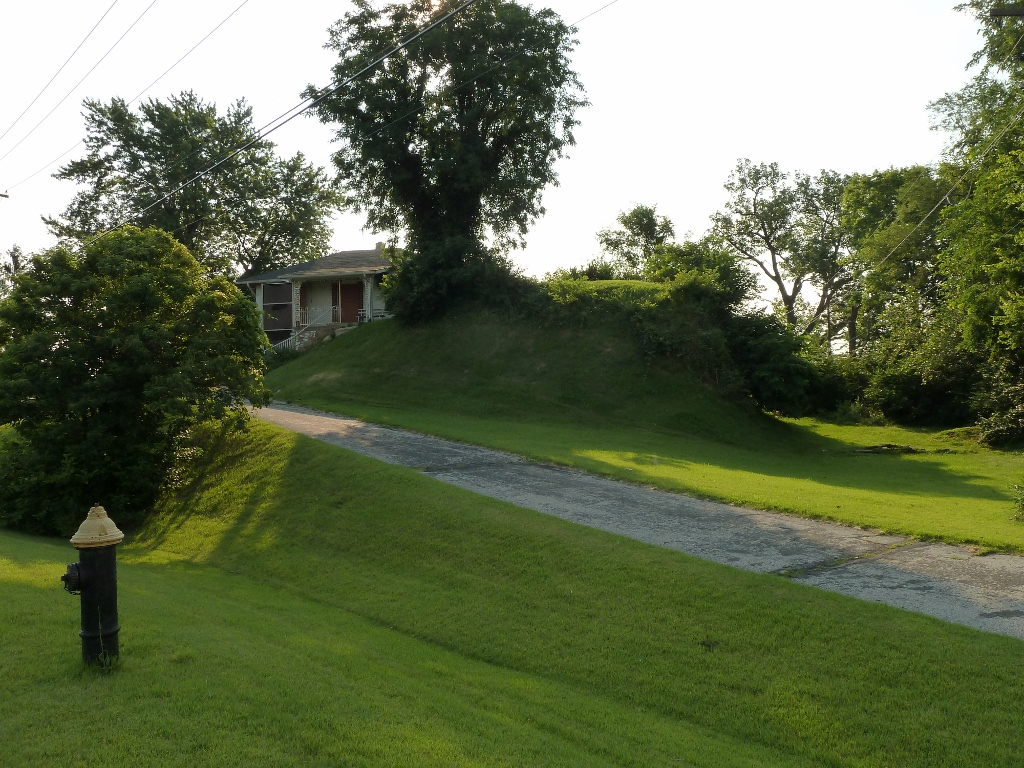 When I visited the mound a year ago, the house was closed up. I got out of the car and walked around the property. While doing this, I met a neighbor walking her dog. It turns out that her house, right next door to the house bought by the Osage Nation, is on a lower platform of the same mound. 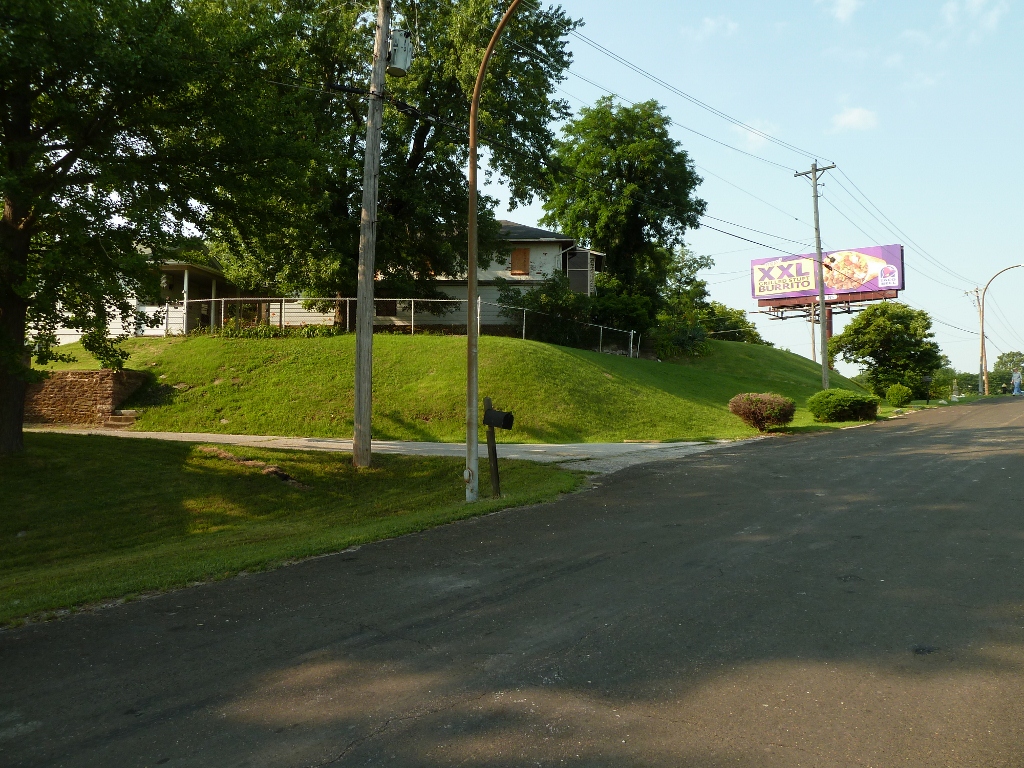 This is the neighbor’s house. It is the one closest to you and to the left. You can see how it sits on a platform. The slope immediately in front of you is part of the mound. Like Monks Mound, this mound was built one basketful of dirt at a time.

She told me that she has lived in the house all her life and that her father bought the house in the 1940s. She mentioned that the Osage would like to buy her house. She is trying to work out a way to stay there until she is too old to take care of the house. 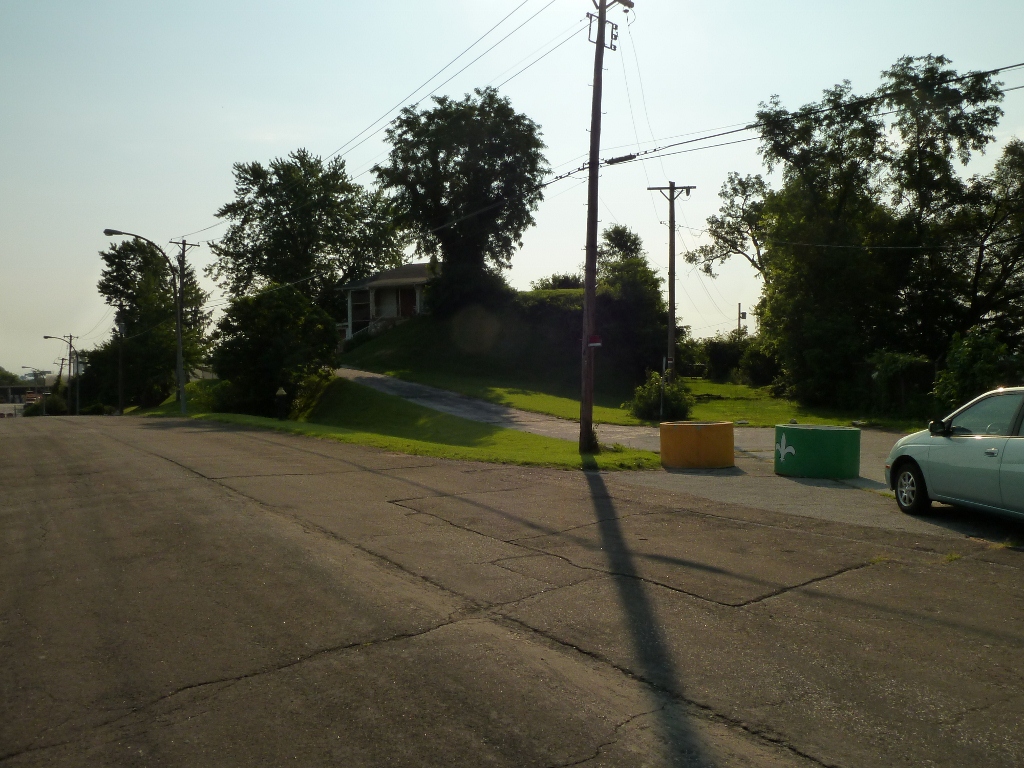 This is the south end of the mound. You can see how a misguided attempt to build a road clipped off the southern tip of the mound. Had the quarry expanded north, the entire mound would have been lost.

The quarry is now gone and has been replaced by an expressway, but the mound remains. Maybe someday the mound will look like it did 1000 years ago and there will be sign on the highway showing where to exit.

Although Sugar Loaf is the last remaining mound in St. Louis, there may be traces of other mounds in St. Louis that an enterprising wanderer could track down. All it would take would be some old maps and a good eye.

And this is what is great about wandering. One small idea can lead to a series of wandering adventures. All you need is an open mind and some curiosity. 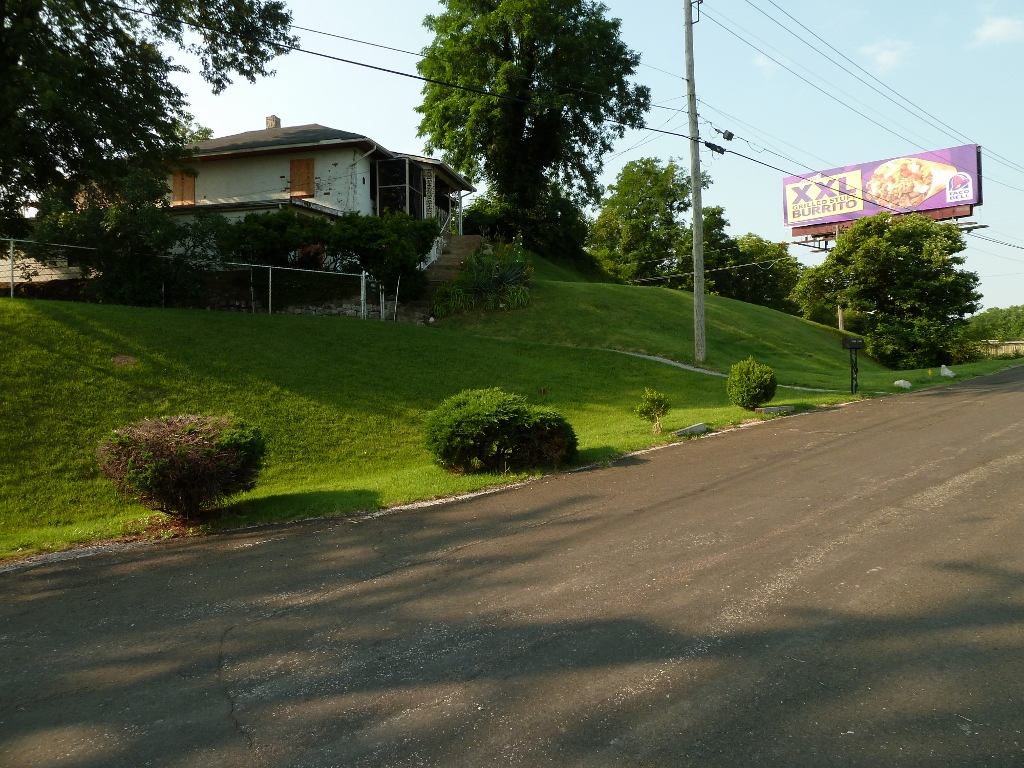 Another view of the mound. The billboard shows how close the mound is to the expressway. 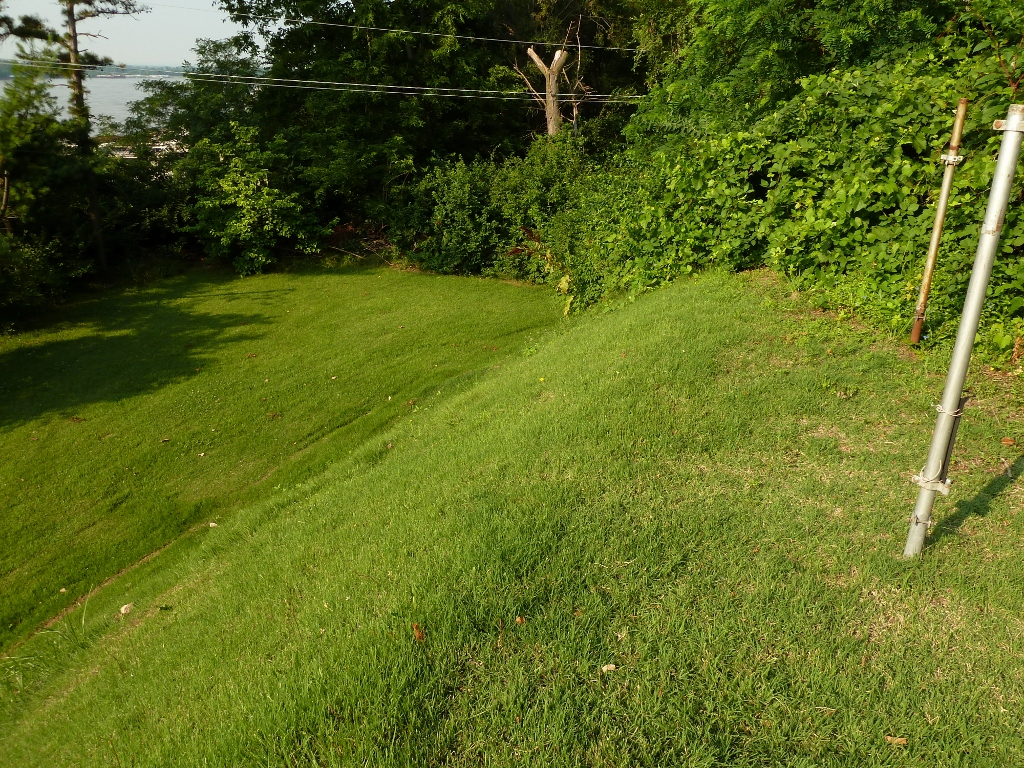 Looking down at the backyard from the top of the mound. 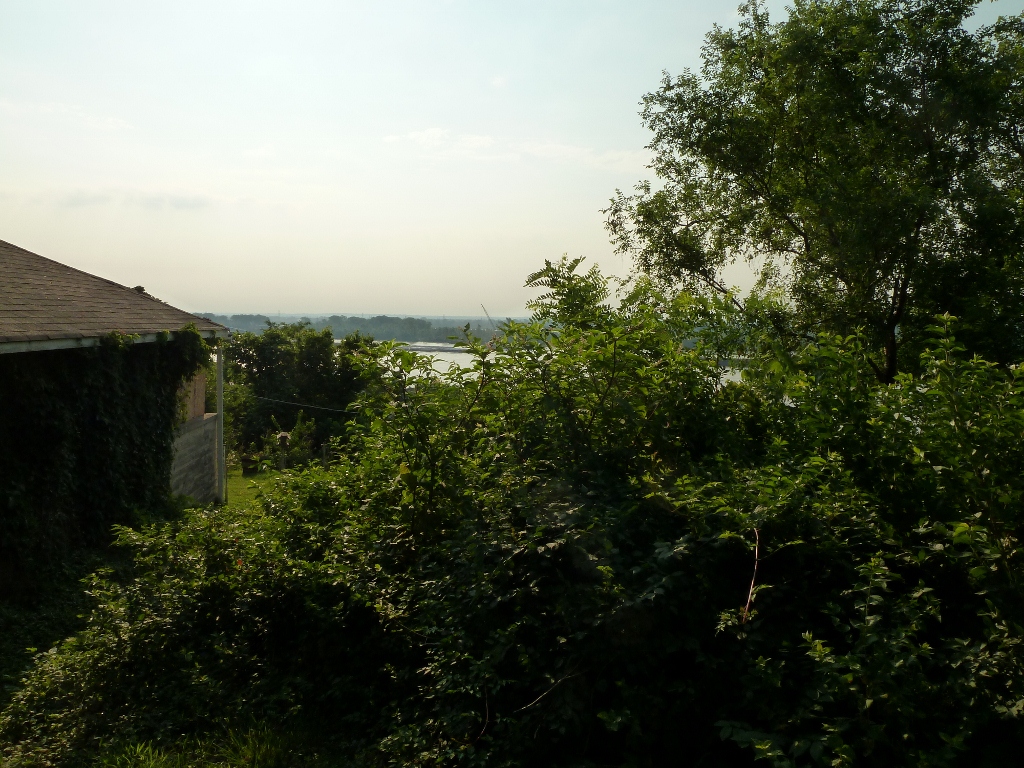 Looking out at the Mississippi from the top of the mound. The trees would have been trimmed away when the mound was active for an unobstructed view of the river. The mound was probably a ceremonial site or a signal station to communicate with Monks Mound a few miles away on the other side of the river.