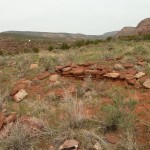 After I went to the top of Guadalupe Mesa I checked it out on Google Earth to see if I could see the ruins. And if you look closely, you can see the ruins. They are a series of parallel walls. 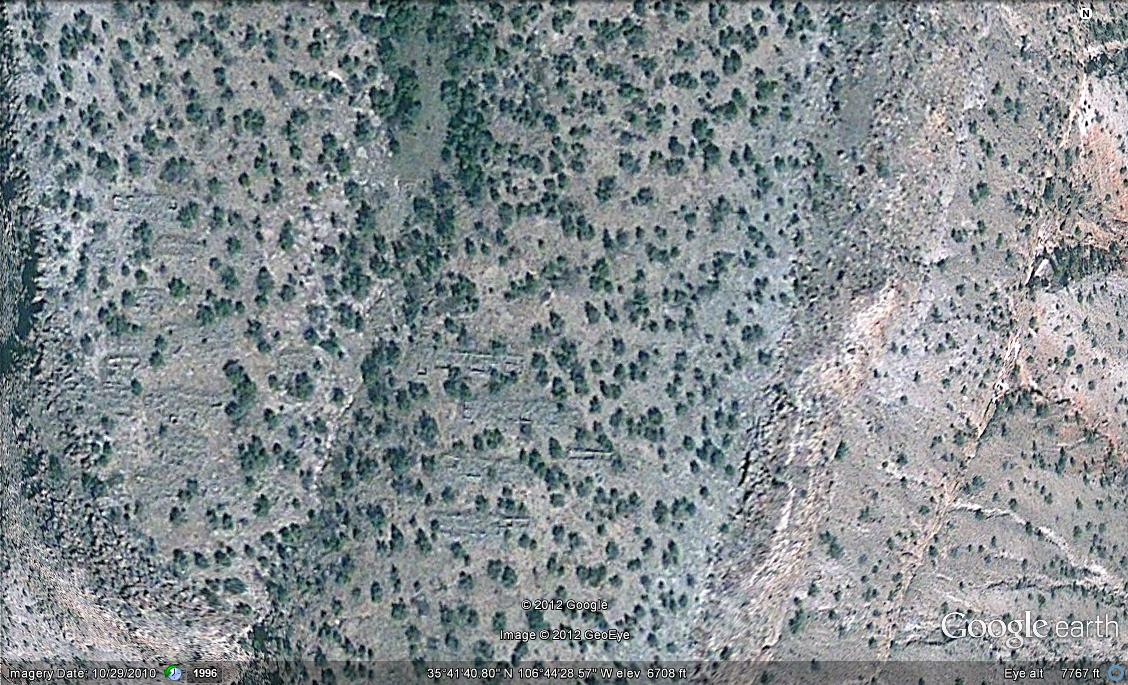 After looking at mesa top, I prowled around in the area with Google Earth to see what else I could see, and when I scanned the top of the shorter mesa to the south of Guadalupe Mesa, I found this. 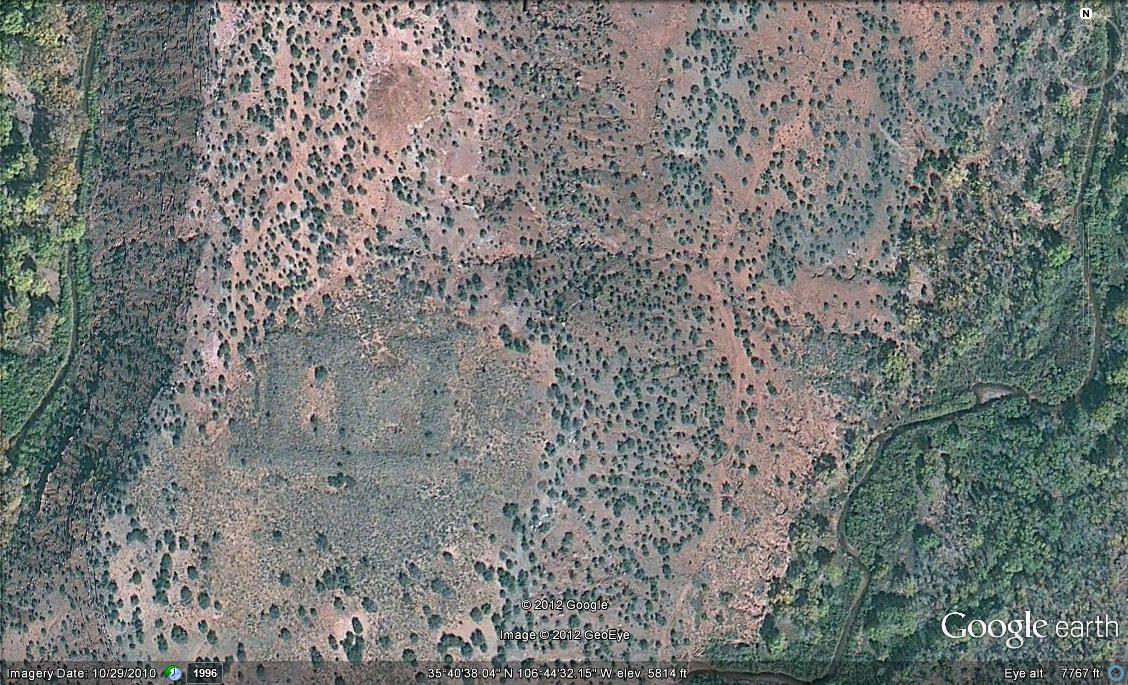 This is clearly a large pueblo with two large plazas. So if I had taken a right rather a left when I reached the top of the shorter mesa on the trip to Guadalupe Mesa, I would have run right into the middle of this ruin.

This left me with no other option but to go back to the area and make a right hand turn to check out the other ruin. And that is exactly what I did the following Saturday. As expected, I landed right in the middle of the ruin.

I even ran into three other people also checking out ruin. One of them told me that the Spanish built a church at this location and that when the Pueblo Indians had another revolt, two years after the Spanish had subdued them at Astialakwa on top of Guadalupe Mesa, the first place they attacked was the church.

The attack eventually led to a rumor that a gold church bell was buried in the pueblo. Sometime in the 20th Century, when the land was privately owned, someone brought up a bulldozer to the mesa top to dig in the pueblo to look for the bell. If you look closely at the Google Earth image, you can see a gap in the north side of the pueblo. This is where the bulldozer dug.

No bell was ever found, and fortunately for us the land is now protected and owned by the Forest Service. 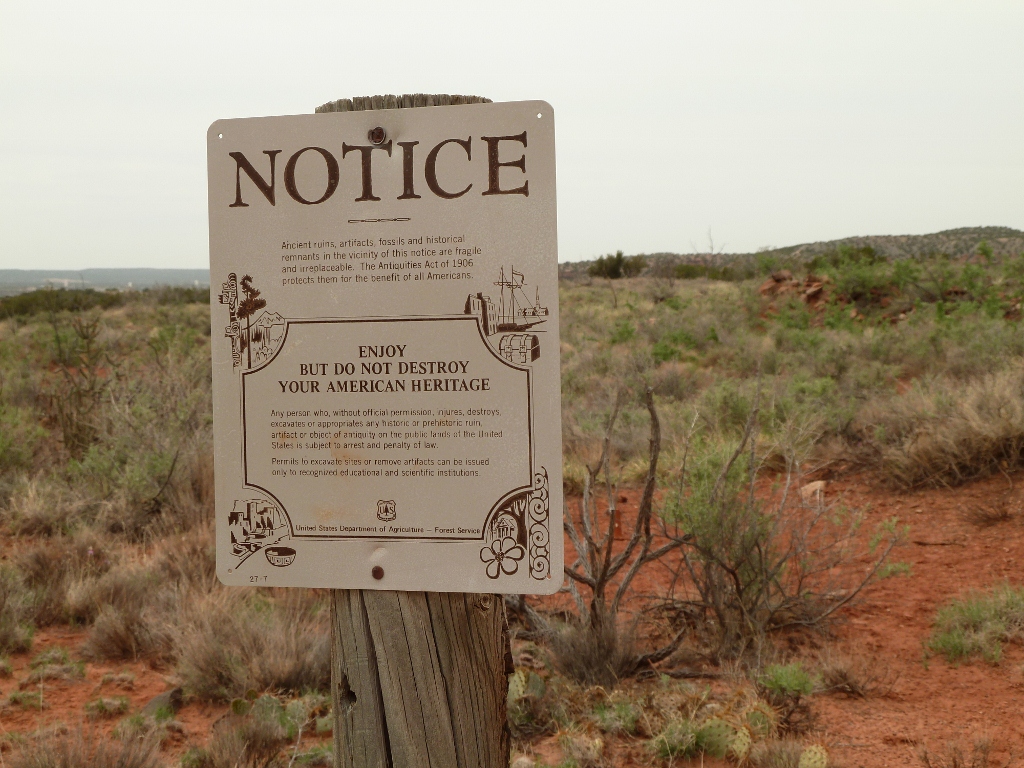 If you look closely at the photo below you can see a ratty looking shrub with fresh green leaves growing on it. The shrub is called lycium or wolfberry. If you happen to be wandering in the backcountry and run across lycium, it is worth your time to stop and look around. You might be on or near an archaeological site. Not all lycium clusters are associated with a site. And not all sites have clusters of lycium. But there are enough sites with clusters to warrant your extra attention. 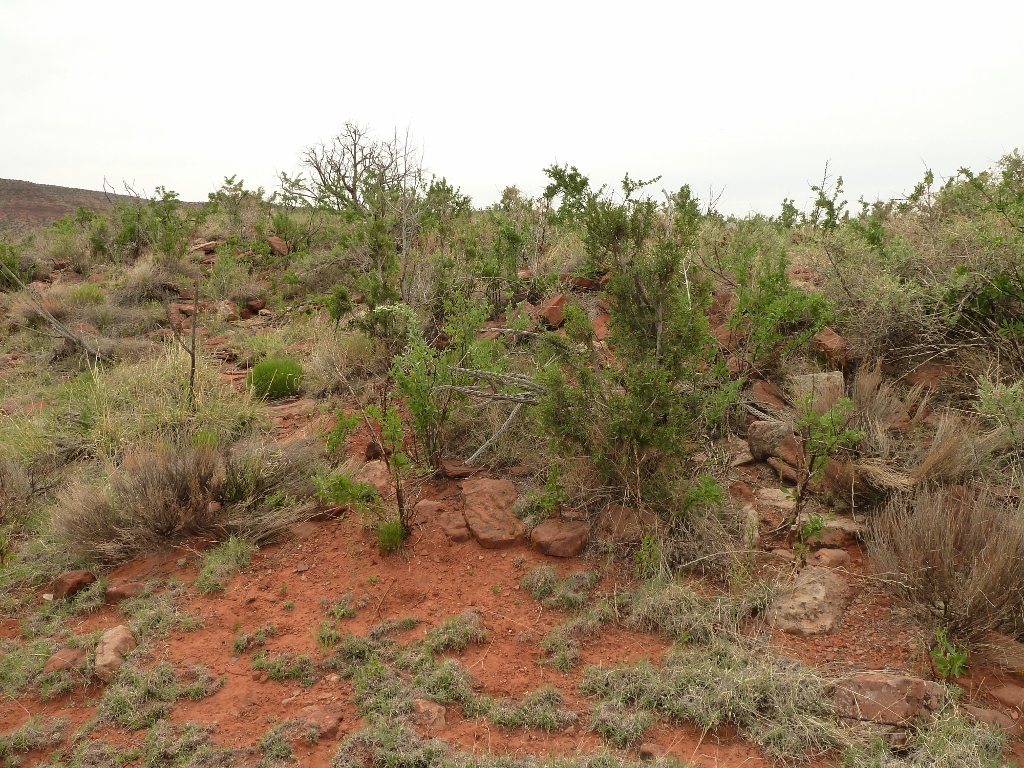 I had always assumed that the relationship between lycium and archaeological sites was because the site’s inhabitants had eaten wolfberries and tossed the seeds out. But I have never seen a berry growing on a lycium plant, and I have seen lycium at every time of the year. Either the berries are very elusive, or my timing has been very bad. I am now starting to think that the presence of lycium is more likely a result of the soil being disturbed. Regardless of the reason for the connection, lycium is a good indicator that you might be on or near an archaeological site. So lycium is one more thing to keep an eye out for when you are in the backcountry. 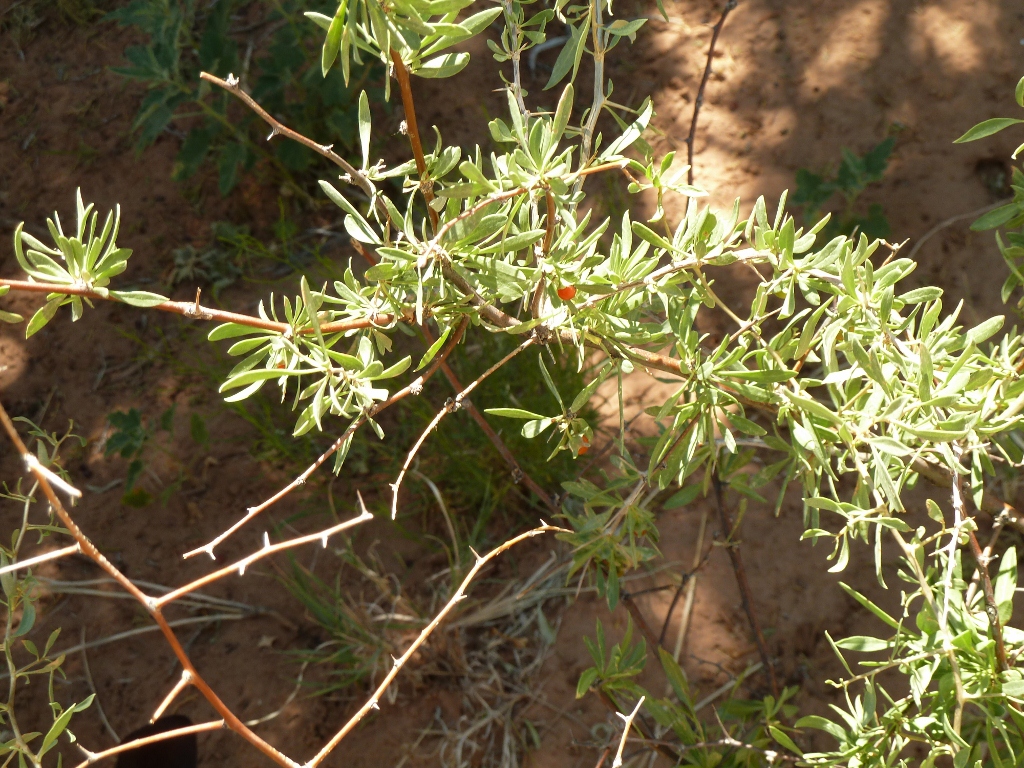 Three weeks after making this post about never seeing a lycium berry (or wolfberry), I saw a berry. I managed to see them from the end of May to the end of June. By early July they were gone. So they may have been a food source, but I still think that a lycium cluster is more likely the result of soil disturbance.

And getting back to the opening of the post, about one wandering adventure leading to another wandering adventure; this can happen whether you are following up on what you saw in Google Earth or taking a closer look when you spot a cluster of lycium.

As for this particular site, more photos are below: 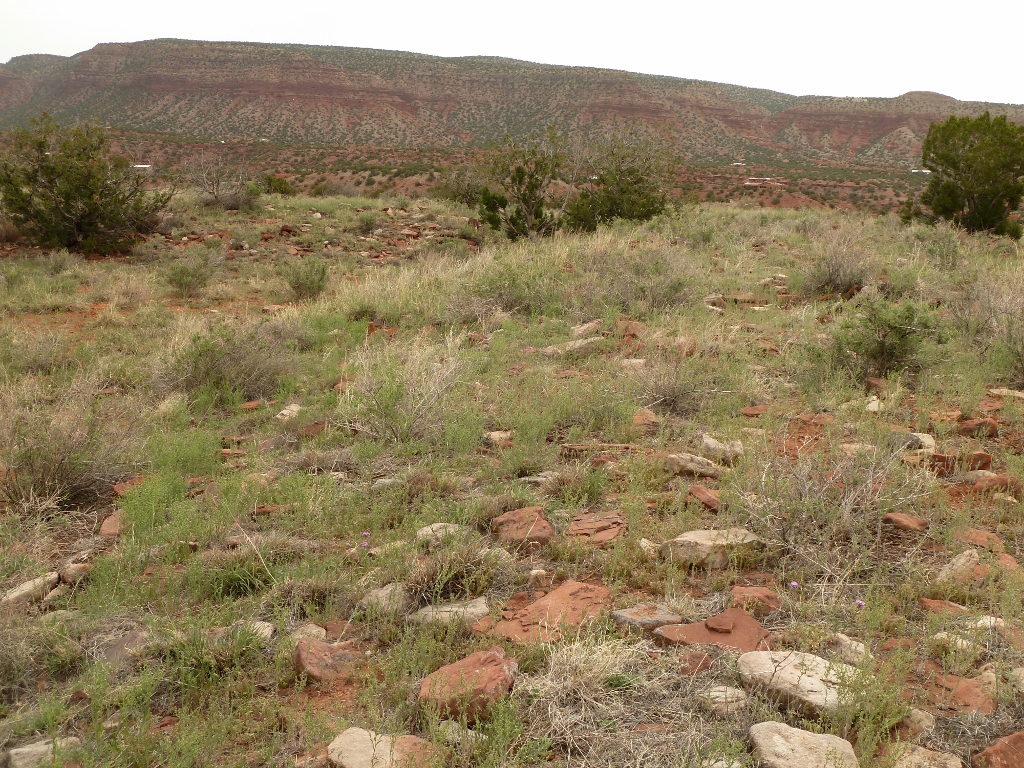 The rocks on the ground were once part of the wall. 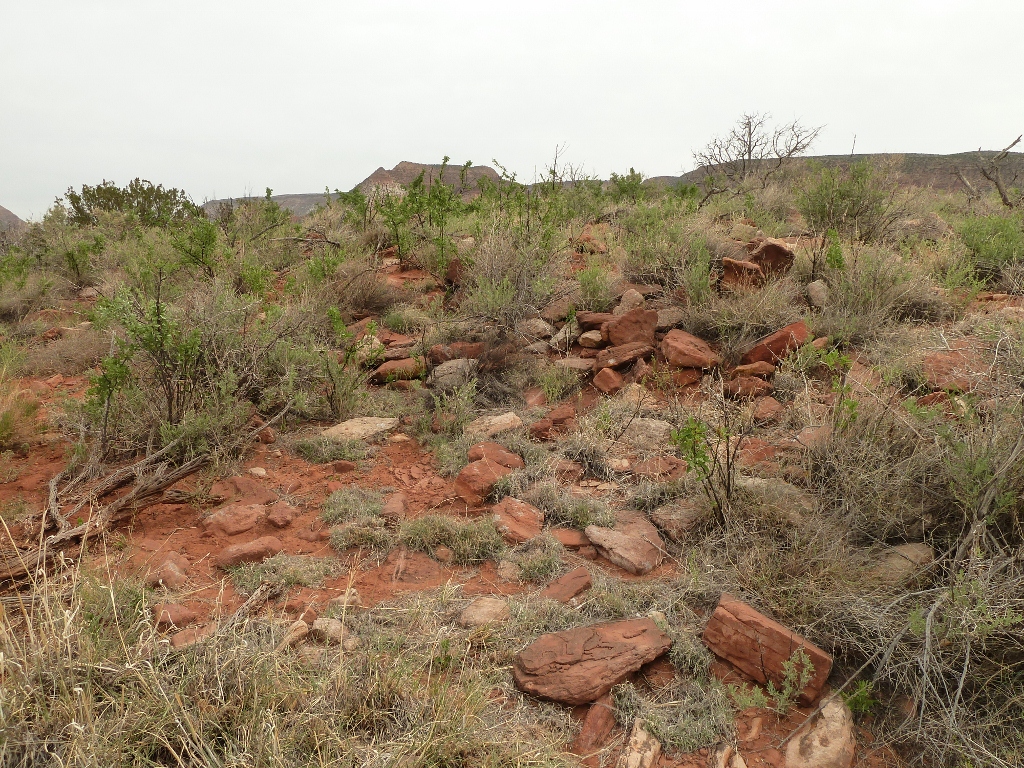 Again you can see lycium on the remains of the wall. 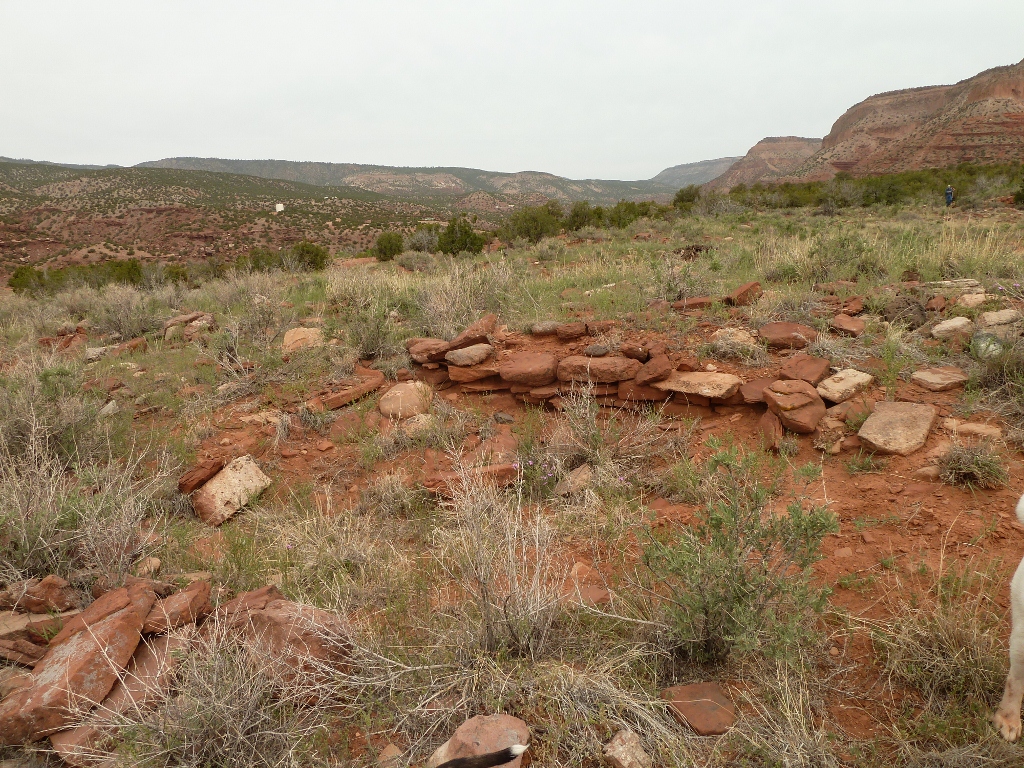 A small portion of the wall can be seen here. As you walk around there is broken pottery everywhere.