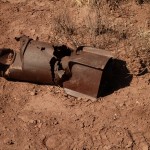 In the book The Gentle Art of Wandering I mentioned using Google Earth to solve a mystery regarding metal debris that we found in the New Mexico backcountry. When we looked at the area where we found the metal in Google Earth we saw the remains of a bomb target built during World War II. The pieces of metal were fragments from bombs dropped on the target.

Look carefully at the Google Earth image below and you can see the rings from the bomb target. The target is about a thousand feet wide. 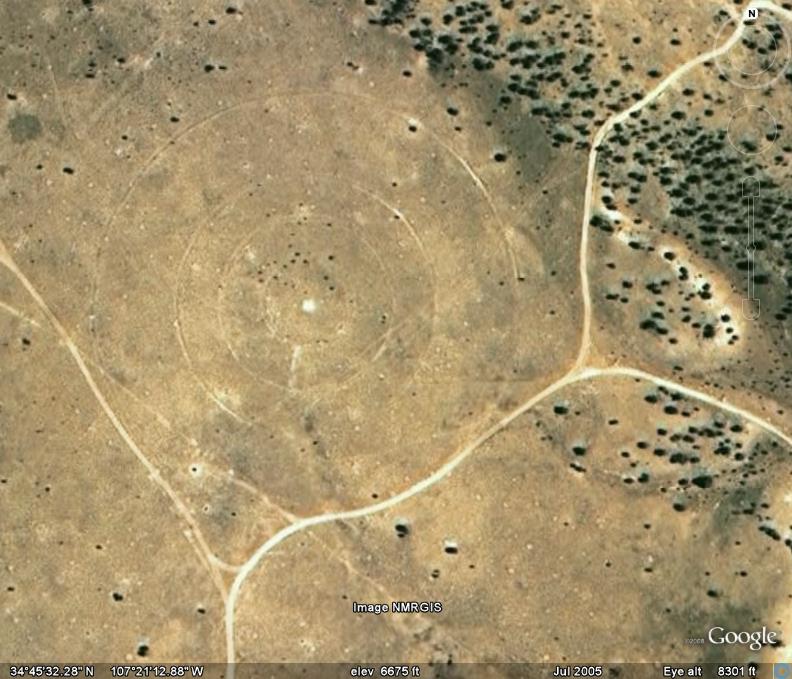 Since finding that target we have found remains of bombs (see below) several miles away from the target. Considering that it might take a bomber fifteen seconds or less to cover a mile, it must have taken some time before one had the skill to hit the target consistently. 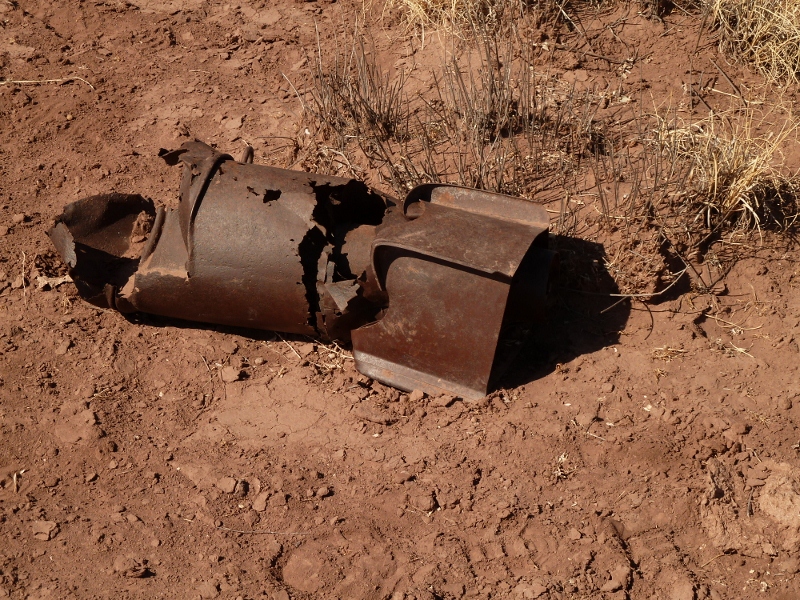 During World War II the US Army Air Corps (now the US Air Force) built several air bases for training bomber crews in New Mexico. (Three of those bases are still active.) Each base had several targets scattered throughout their area to use for bombing practice.

One day while walking around the base of this tall mesa (see below) in the Ojito Wilderness (about a one-hour drive from Albuquerque) to look for archaeology sites, 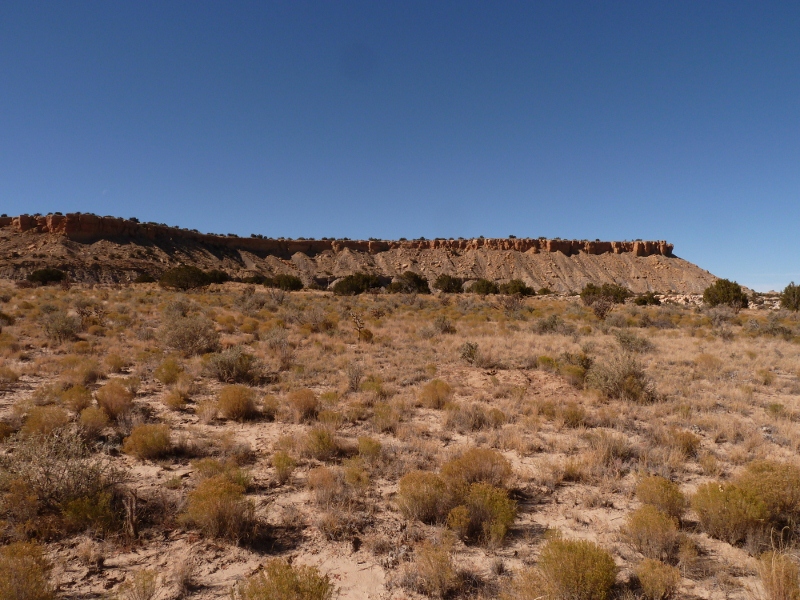 we found metal fragments very similar to what we found near the target just described. 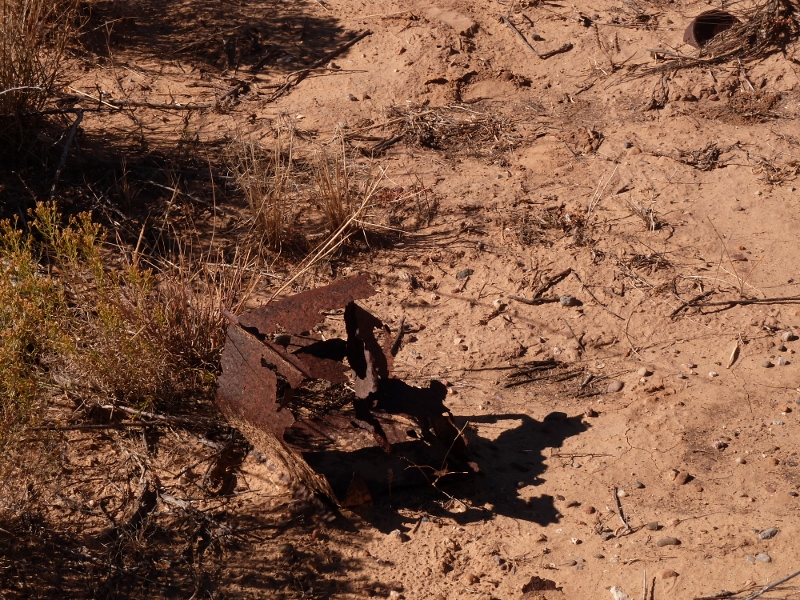 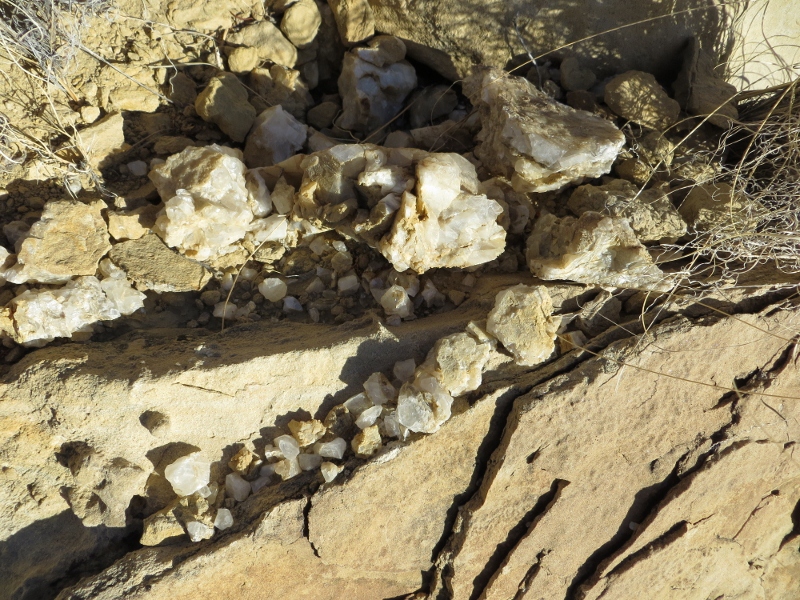 and this layer of mollusk fossils. 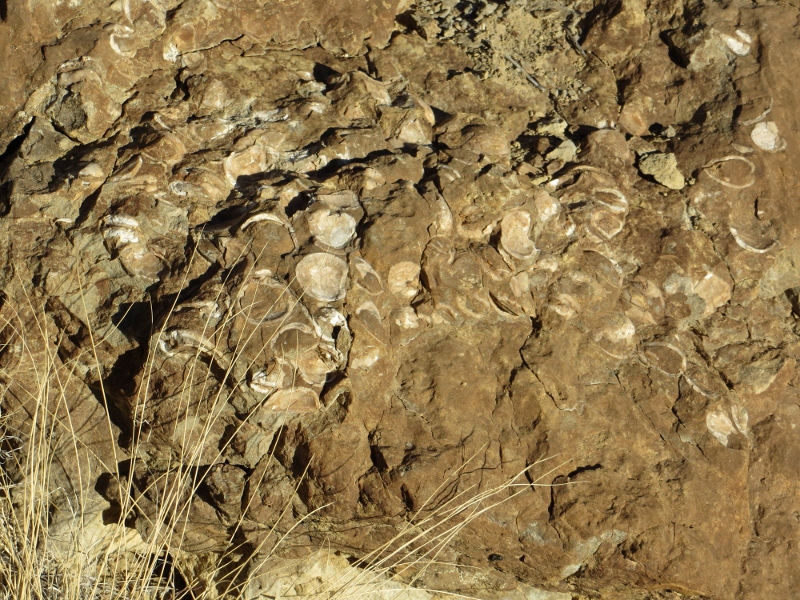 We even found a few archaeological artifacts such as this piece of obsidian. It looks like it might be the tip of a spear point. 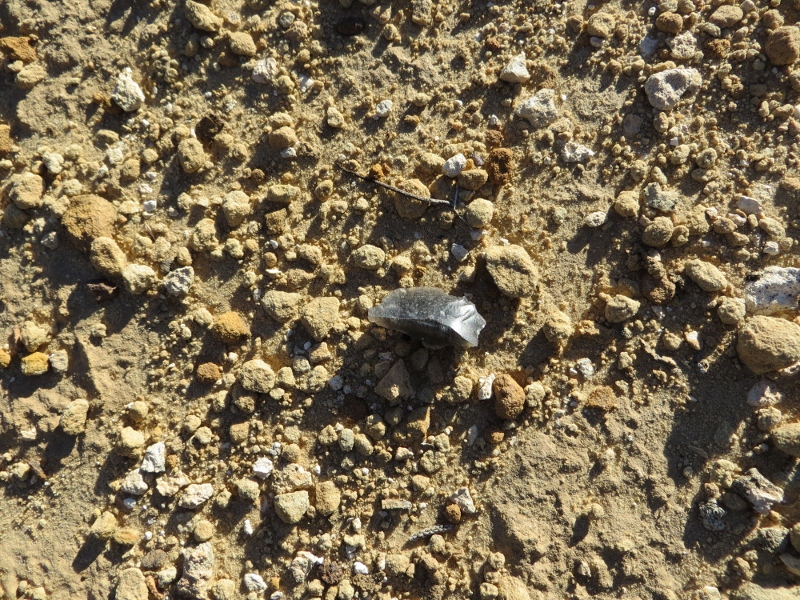 The great thing about wandering is that you will always find something. It’s not so much a case of you finding something; it’s really adopting the mindset of wandering so you can see what is already there for you to enjoy.

When I got home that night, I used Google Earth to look at the mesa top, and as expected, I found another bomb target. 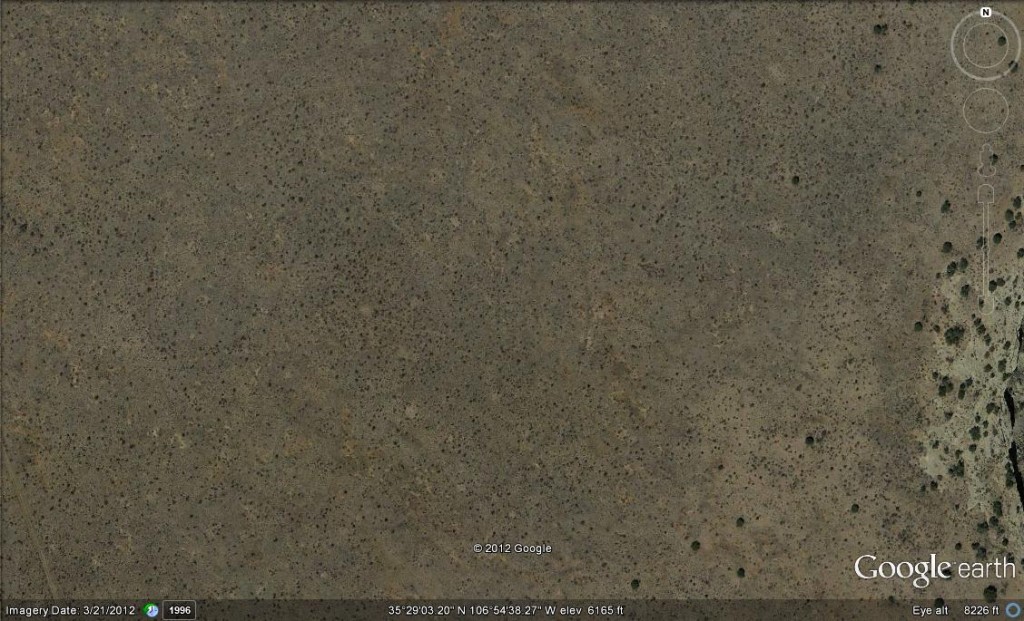 As you can see, you really have to strain your eyes to find the target. The difference between the two targets is that the first target was built on a mesa with a volcanic cap while this second target was built on a sandstone mesa. After almost 70 years of being exposed to the weather, loose sand has drifted to cover the rings of the second target.

Being able to notice what’s different is a big part of wandering. It’s this noticing that helps you to make discoveries and to solve mysteries. And it’s these mysteries that will keep you wanting to come back for more.

And coming back for more is what we did. On another visit to the area, we climbed to the mesa top to see what remains of the target we could find. Although climbing a steep wall mesa like this can be a daunting challenge, 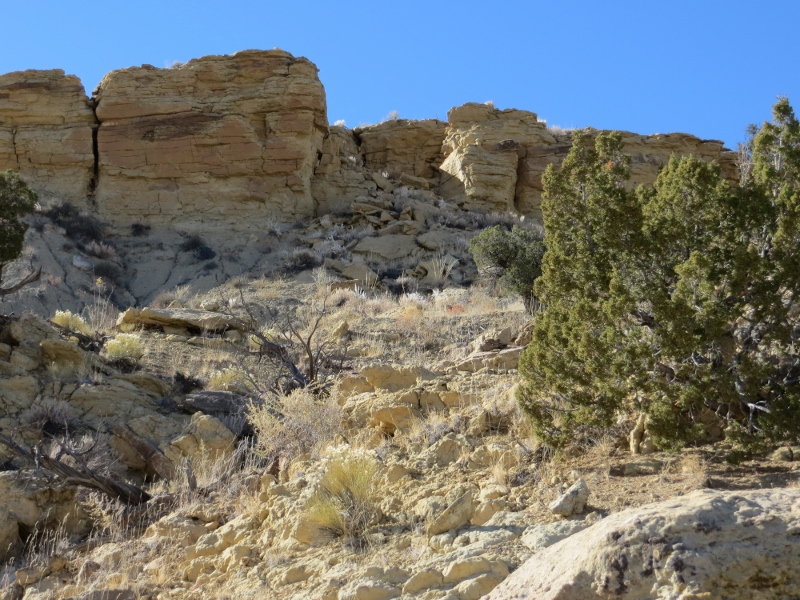 you can usually find a break that will let you make it to the top. 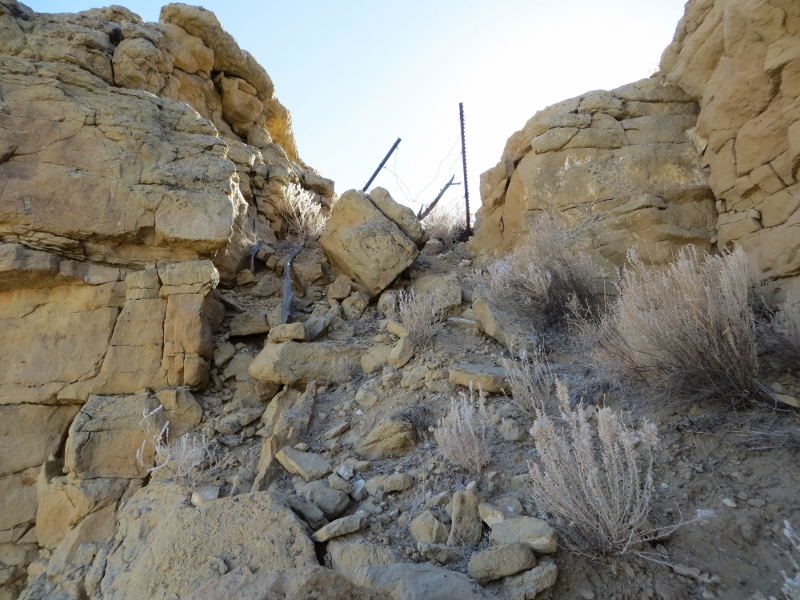 This break even has cairn above it to help you find it when it’s time to go back down. 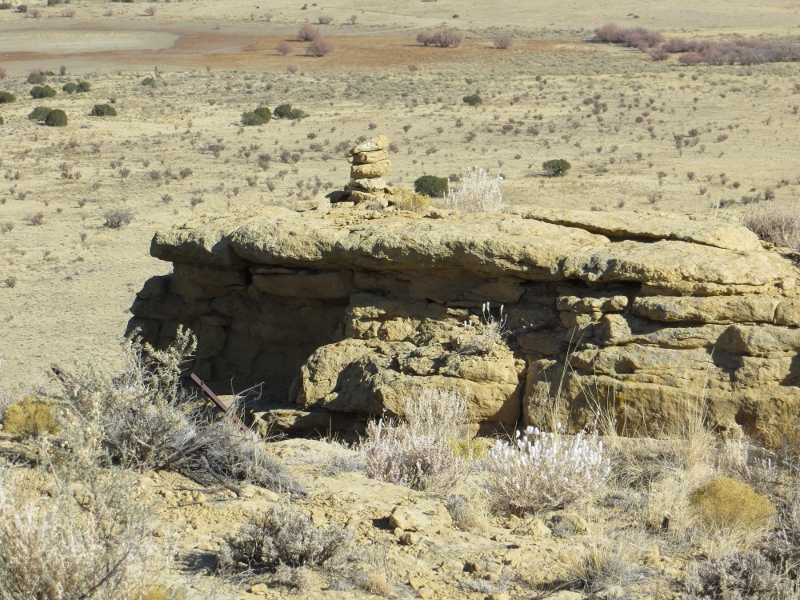 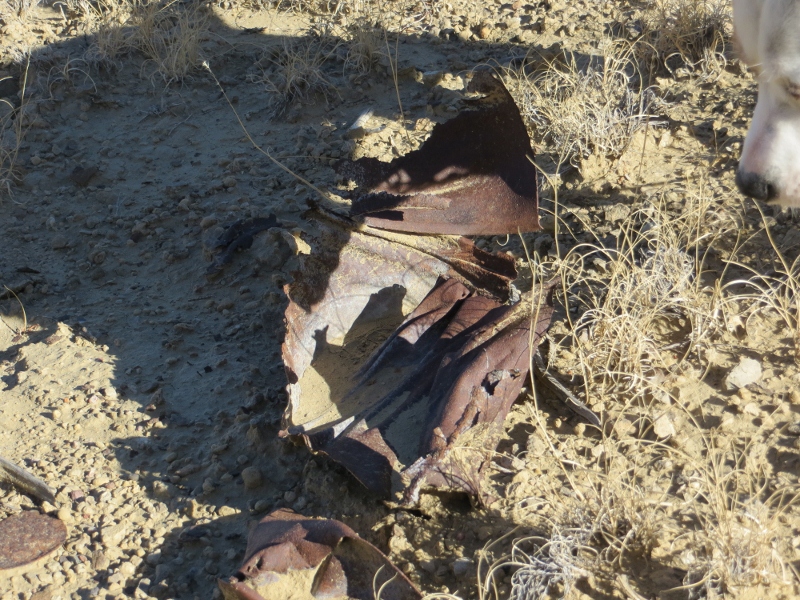 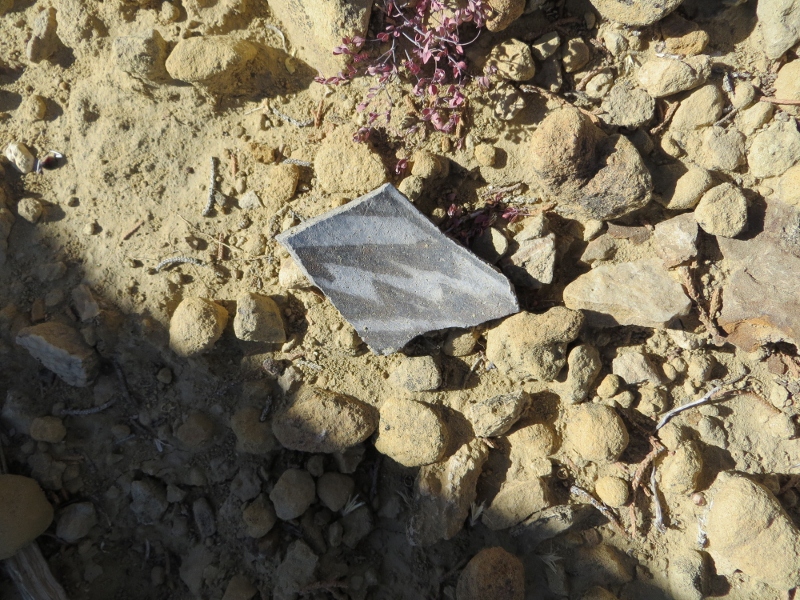 When we reached the top, we found more bomb fragments 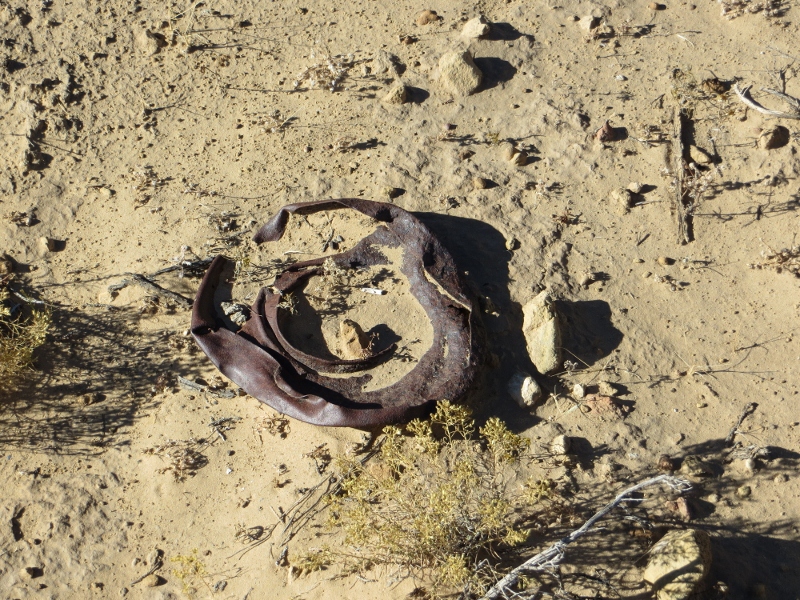 And a potsherd from a completely different era than the one we found on the way up. 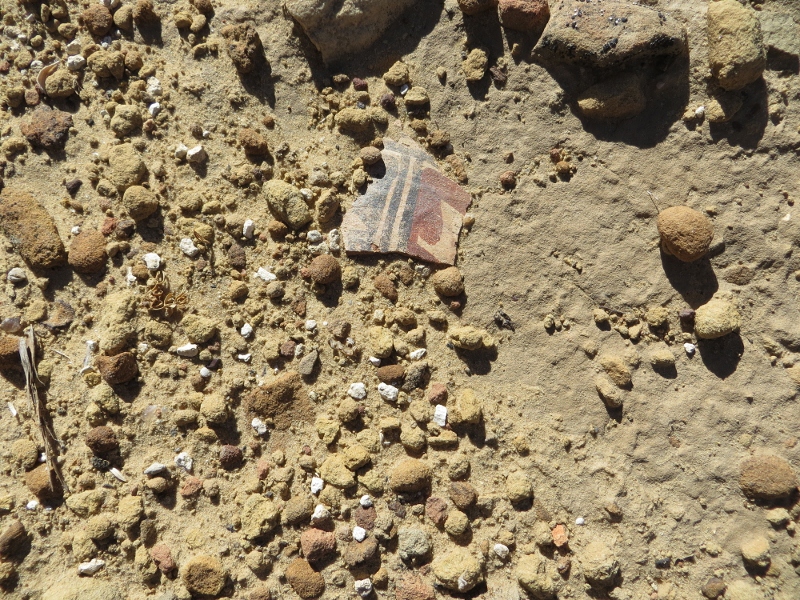 These different types of potsherds just mean that people have been going to the top of this mesa for a long time.

As expected we were not able to find traces of the target rings on the ground. But we did find the target center and it was surrounded by bomb fragments. 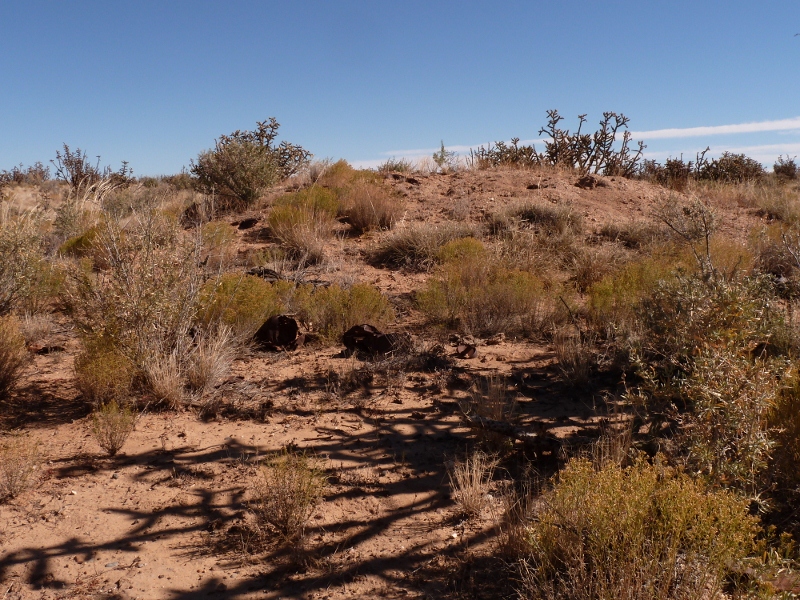 If wandering around a place like this interests you and is something you want to try, the best way to start is to get out there and start walking. There are several posts in this blog that can give you some ideas and tips on how to do it. If you’re still stumped, please feel free to contact me through this website. I will be happy to help you any way I can.