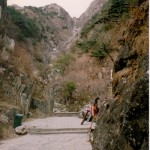 Mount Taishan in Shandong Province is one of China’s five sacred Taoist peaks. My wife Claudia and I had the opportunity to climb Taishan in November 1996.

The route to the top of Taishan begins right in the town of Tai’an. By the time you get back to town you will have walked well over ten miles and climbed over 4000 feet. 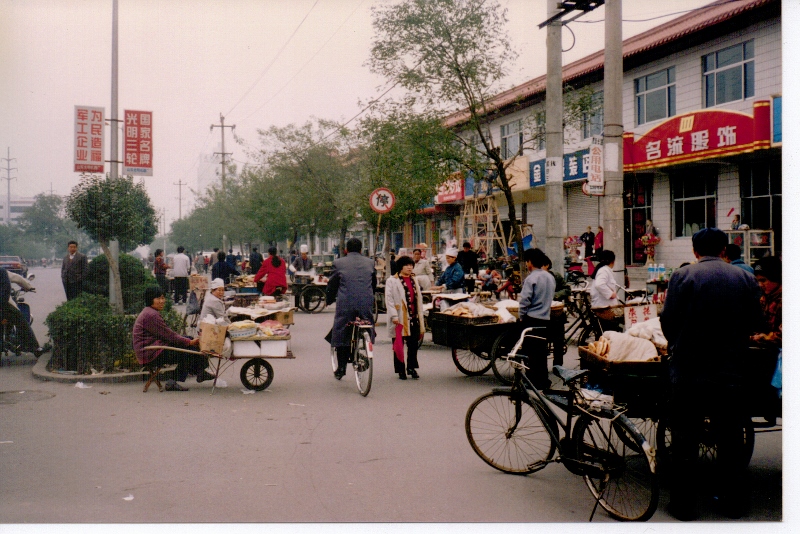 A typical street scene in Tai’an, or for that matter any Chinese town, in 1996.

If you want, you can take a bus half-way up the mountain and then take a gondola to the top. We wanted the real experience so we walked the entire distance and are glad we did.

It is a mountain walk like no other. With over 3000 years of visitation any semblance of a mountain trail is long gone. The entire route is paved with flag stone and stone blocks and has over 6000 stair steps. If you like public stairways, you are home.

It is not a stairway for fitness training or for attempting personal bests. It is a stairway that varies in size and pitch as it winds up the mountain. It is more like a linear village than a stairway. The route is lined with cultural attractions and businesses all the way from the base to the summit. There are shrines, temples, side paths, nooks and crannies to explore the entire way up.

But the most interesting are the people you’ll see on the way up. You’ll see families in their best clothes and smooth sole shoes walking up the slick stone stairs as if good traction was only for sissies. You’ll see laborers struggling with heavy loads of supplies to keep the business establishments along the way and at the top of the mountain going. The loads will be dangling from the carry sticks on their shoulders. I wonder if this is still the practice in 2013.

I wish I had taken pictures of them but I didn’t want to be invasive at the time. I certainly had my picture taken by other walkers as they wanted that strange looking Westerner in their photo album. I’m not sure if I have ever been as popular. I must have been included in at least fifteen different family portraits.

Speaking of pictures, my first reaction in looking at my pictures is how different it is today with digital cameras. What seemed like a lot of pictures at the time now seems like a pittance. And why didn’t I take a picture of this, or this, or that. I guess that’s why you bought post cards.

But let me at least share some of the pictures that I did take to give you some idea of what Taishan is like. For me it was an incredible experience. And if I ever do go back to China, it is the one thing in China I would like to do again. 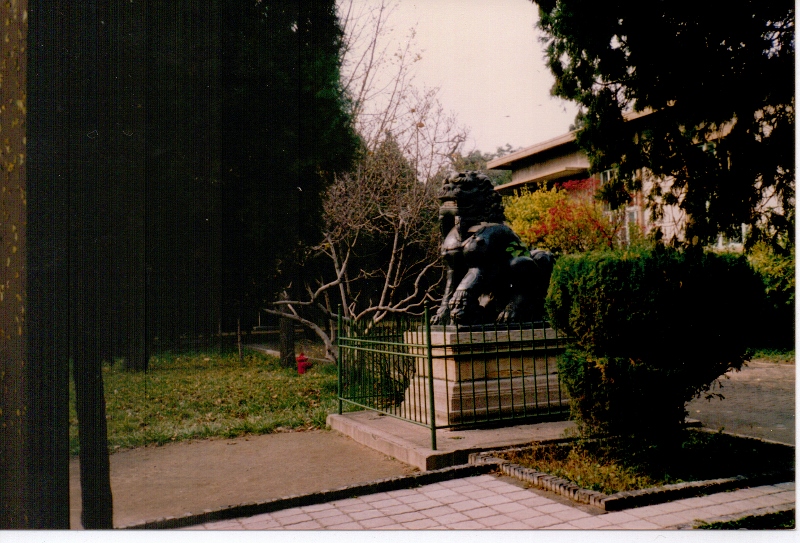 The walk to the top of Taishan begins in Tai’an where you will pass some old temples and palaces that are now museums. 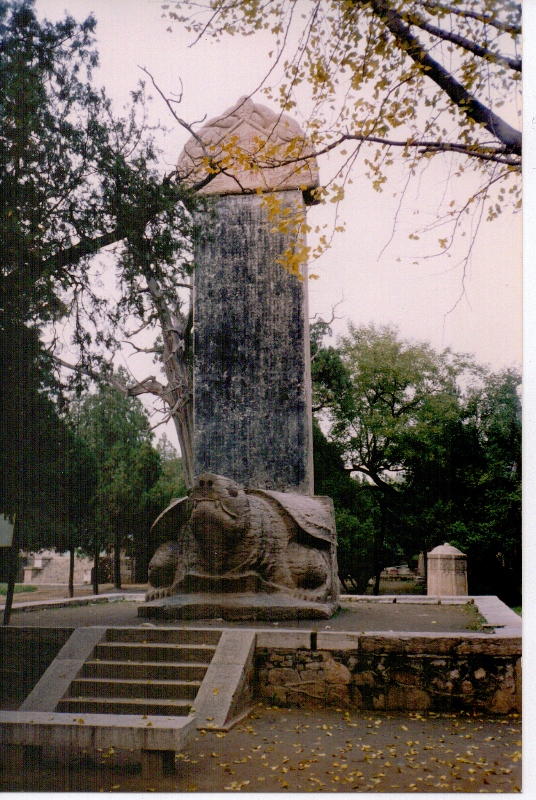 This tortoise with a stele is at one of the temples in Tai’an. You’ll see more of them as you continue your journey. 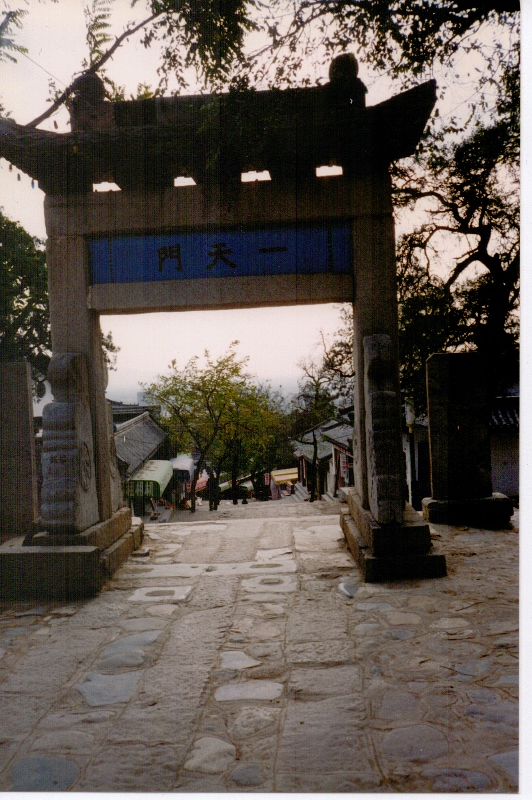 When you leave the temple area in Tai’an the route becomes a walkway paved with stones. You’ll pass through many gates and archways on your way up. 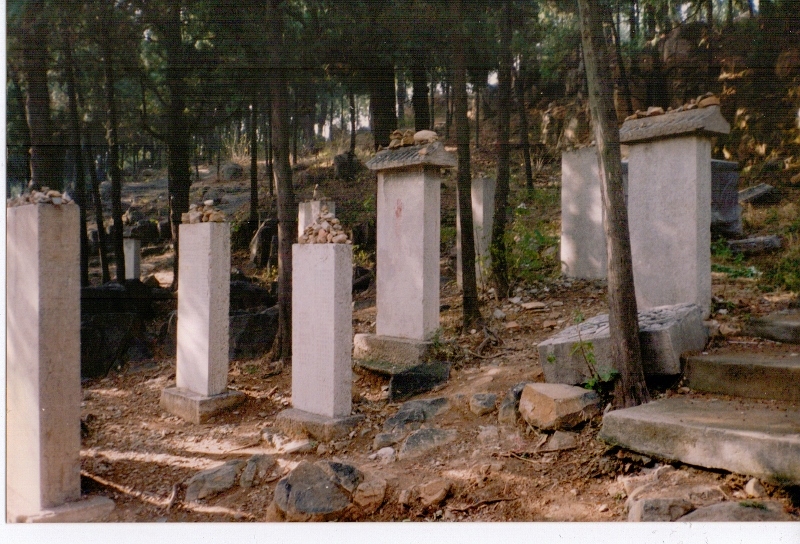 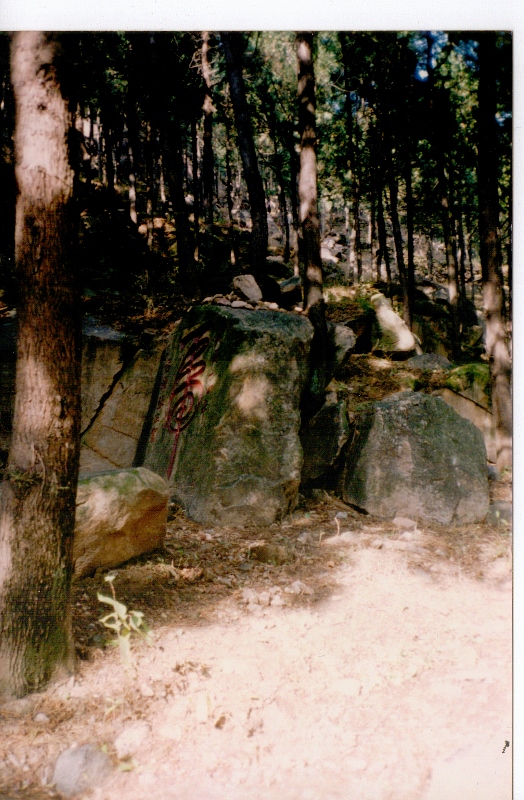 Many of the boulders along the side of the walkway are carved with caligraphy. Look carefully at this boulder to see the caligraphy in red. 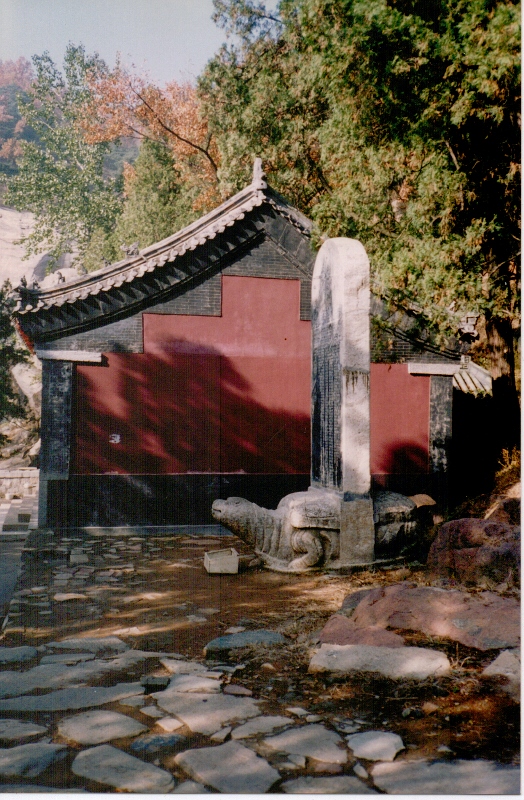 Here is another tortoise with a stelle and a temple along the side of the walkway. 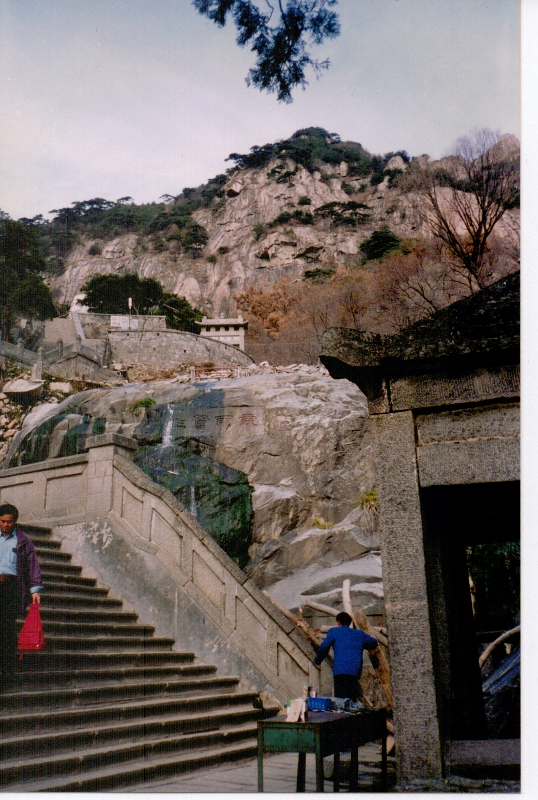 Here you can see that we’re working our way to the top of Taishan. Look carefully at the rock face and you see some more caligraphy. 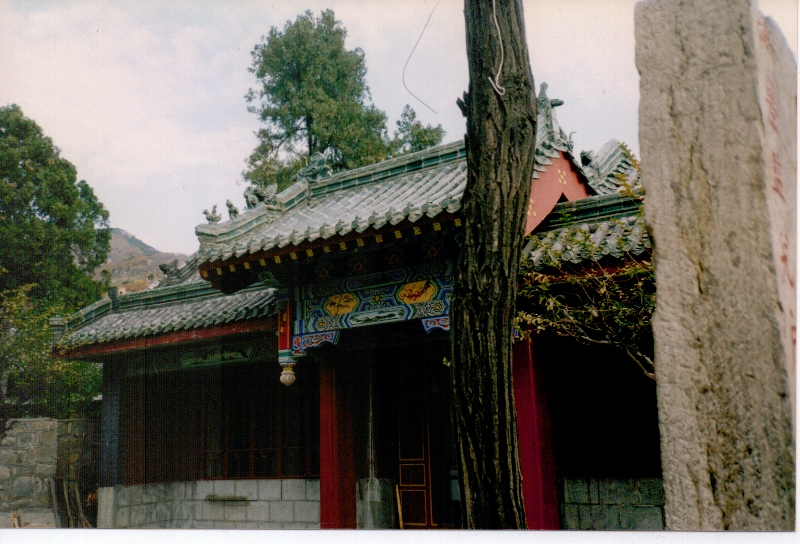 Another one the many dozens of temples and other structures along the way. If you checked them all out you could spend several days getting to the top. 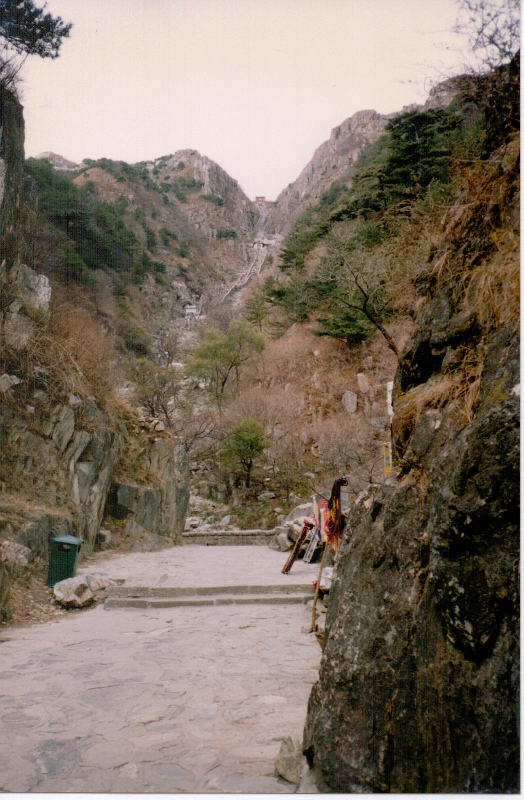 You can see that the stairway gets steeper and narrower as you get closer to the top. 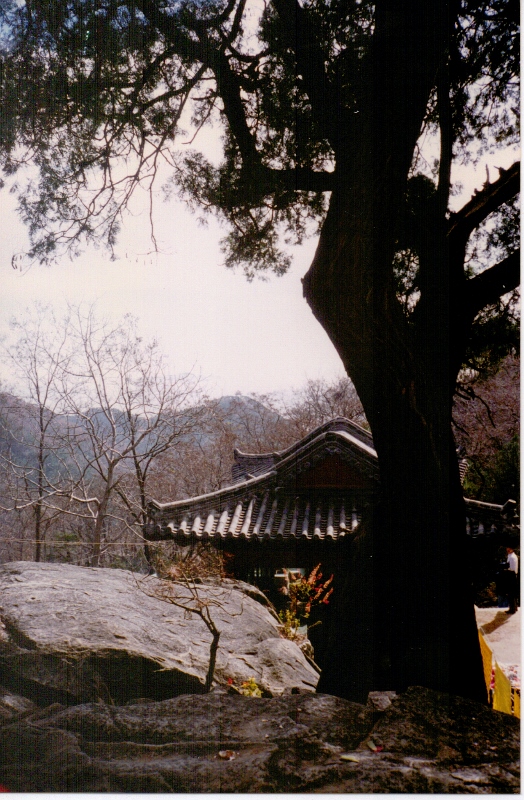 And yet another temple along the side of the walkway. 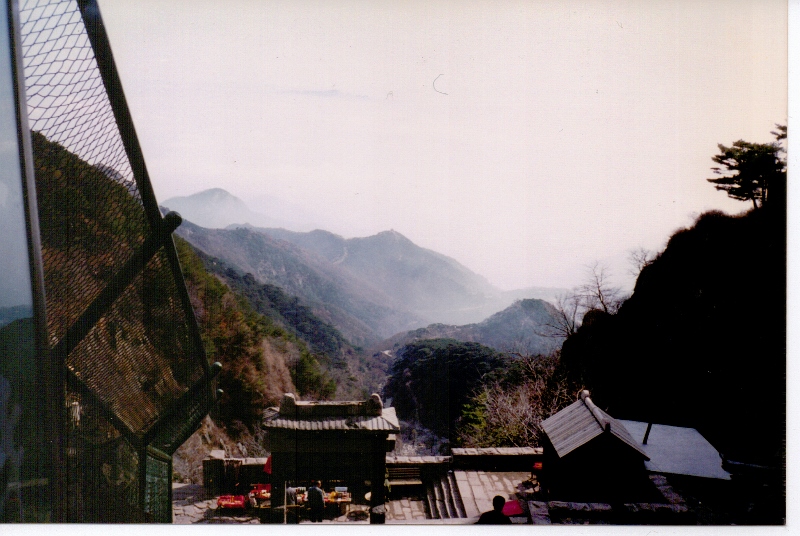 Getting close to the top and looking down. 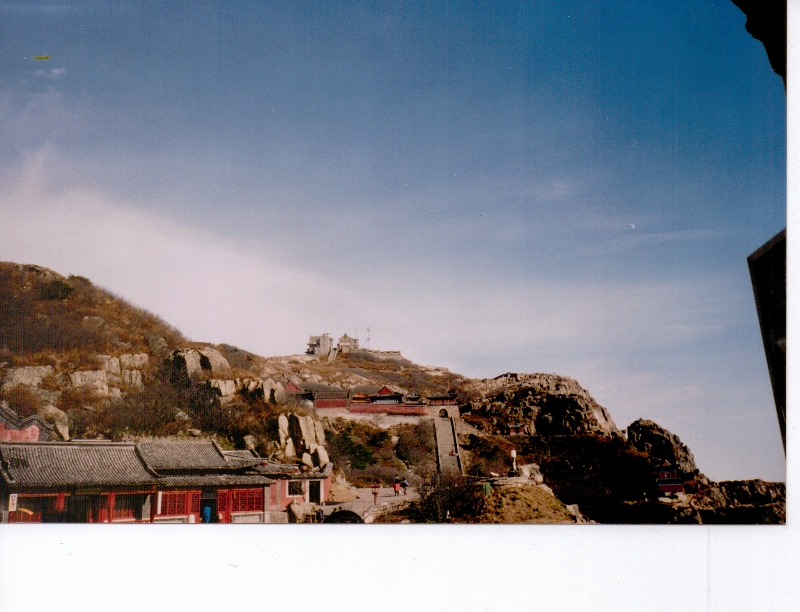 After several hours of you will finally reach the top. There you will find temples, guest houses, and places with great views. 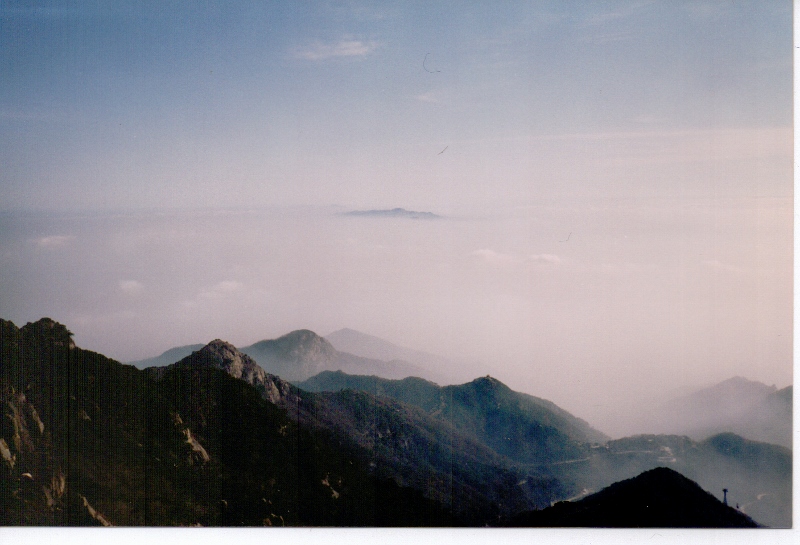 And the views are great and you will discover why this view inspired Confucius, Mao, many Emperors, and maybe yourself.