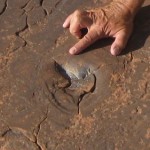 If you’ve read the Gentle Art of Wandering, you know the book opens with a pair of hikers finding a dinosaur while wandering in the New Mexico backcountry. A friend of mine from Chicago, Nick Saines, told me about a group of hikers who found dinosaur tracks in the Red Rock Canyon area a few miles west of Las Vegas, Nevada.

Paleontologists have confirmed the footprints as being Grallator footprints, a small two-footed meat eating dinosaur, and the trackway as Octopodichnus tracks, a small tarantula like arachnid. The location of the tracks and footprints is still being studied by scientists and is not yet open to the public. You can, however, read about the discovery in this article from the Las Vegas Review Journal.

What is remarkable about these discoveries is where they were found. They were found in sandstone that was formerly a sand dune. It is very unlikely to find tracks and footprints in a former sand dune because as soon a track or footprint is made it starts to fill in and begins to blow away with the next breeze. These tracks and prints must have been made right after a rain when the sand would have been firm enough to hold a track or a print. When Nick told his class that “it was a matter of time” before dinosaur footprints were found in the Red Rock Canyon area, he was not thinking of a former sand dune; he was thinking of other rock formations.

From the wanderer’s perspective, the significance of this discovery is that discoveries are being made by people like you and me all the time. And a discovery can be made even where it is not supposed to be made. But you can’t make a discovery if you don’t get out. And when you do get out, the mindset of wandering and beginners mind will help you see what is already there. 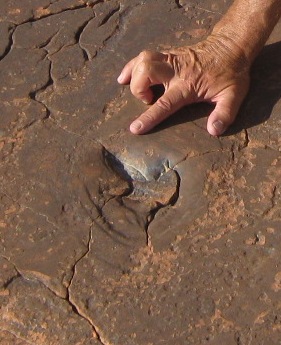 This is the dinosaur track found by Nick (photo courtesy of Nick Saines; photo by Steve Rowland)