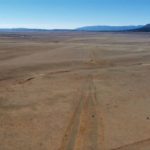 Wandering, as has been described many times on this website and in the book The Gentle Art of Wandering, is about adopting a mindset that allows you to see and then letting what you see guide you on where you go. It’s about setting yourself up for having an adventure and making amazing discoveries every time you step out the door.

But as the Wandering book points out, it’s also good to have some ideas for places to check out as that can provide the necessary context that you might need to get out the door. An idea could be as simple as a hiking trail to check out, following up on a hunch, or something else. But it is only when you act upon your idea that your wandering adventure can begin.

To get some new ideas during the pandemic, I pulled out a few of my Land Status maps to look for some new places to explore and noticed a dashed line on the Albuquerque Land Status map labeled Old Stagecoach Road. 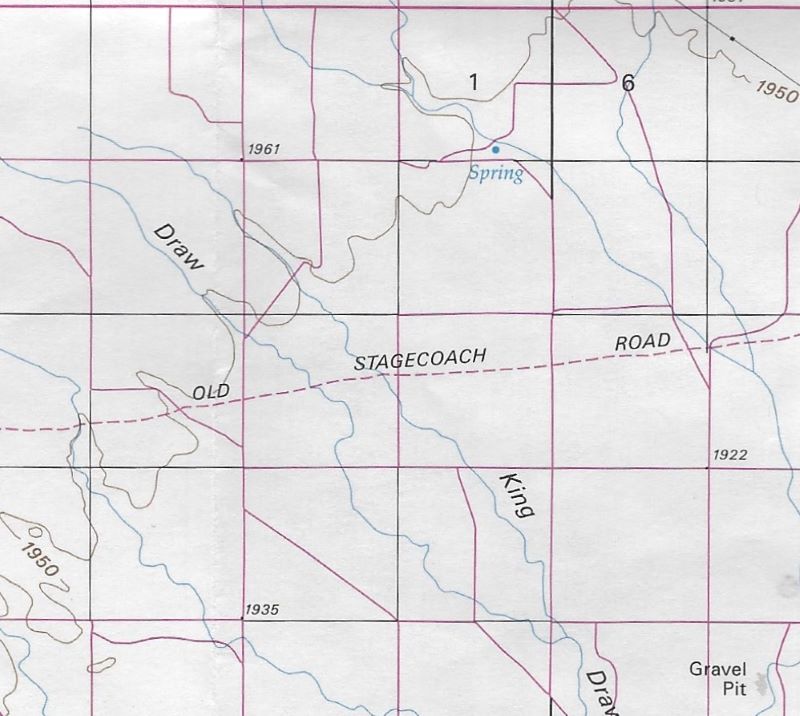 This portion of map is west of Stanley, NM.

As you can see (by the lack of color coding), the old stagecoach road on the map above crosses private land. Fortunately the stagecoach line continued on to the next map east (Villanueva), and there the old route does cross a tract of State Trust Land (color-coded Blue on the map). 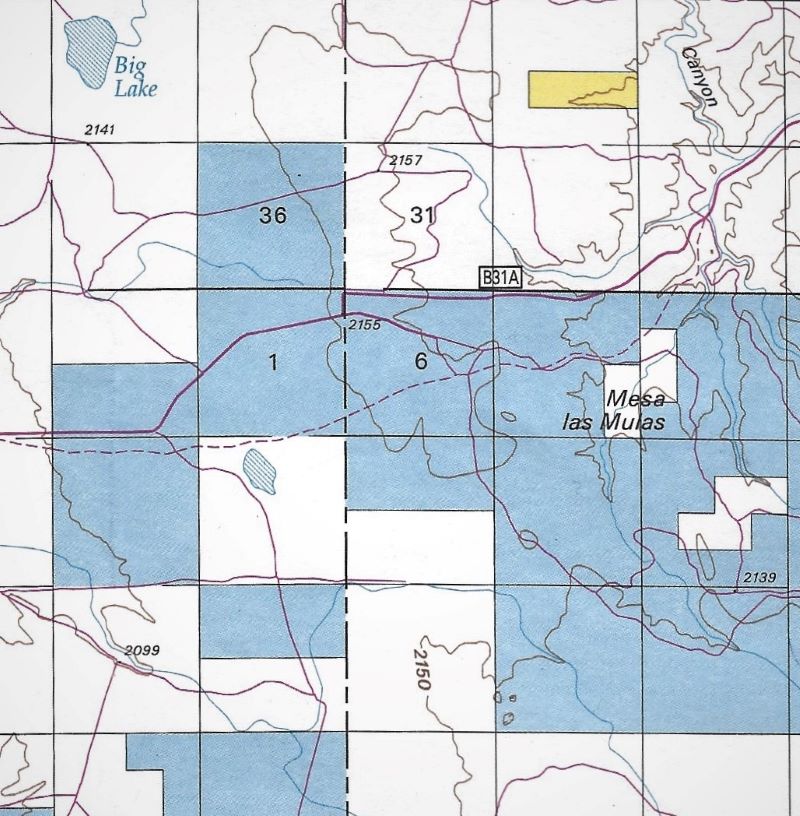 This tract of land is several miles north of Clines Corners on the Santa Fe county and San Miguel county border.

If you wish to hike or explore on State Trust Land, you’ll need a State Land Office Recreational Access Permit. (You can obtain one at www.nmstatelands.org .)

As you can see from the photos below, it would take a very active imagination to visualize any type of a stage coach route passing through here. 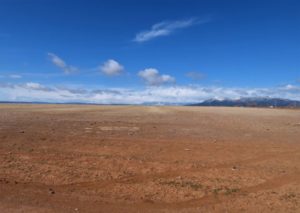 This is the view from the road looking across private land. 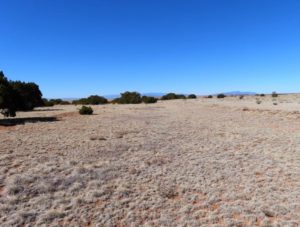 This the ground level view on State Land.

But when I got a drone for Christmas, I went back to both places to see if the drone would see anything different. With the State Land being heavily wooded with piñon and juniper, the drone photos were inconclusive. But with the tract of private land being wide open, the drone pictures were very conclusive, and as you can see below, it is very easy to identify the old route. 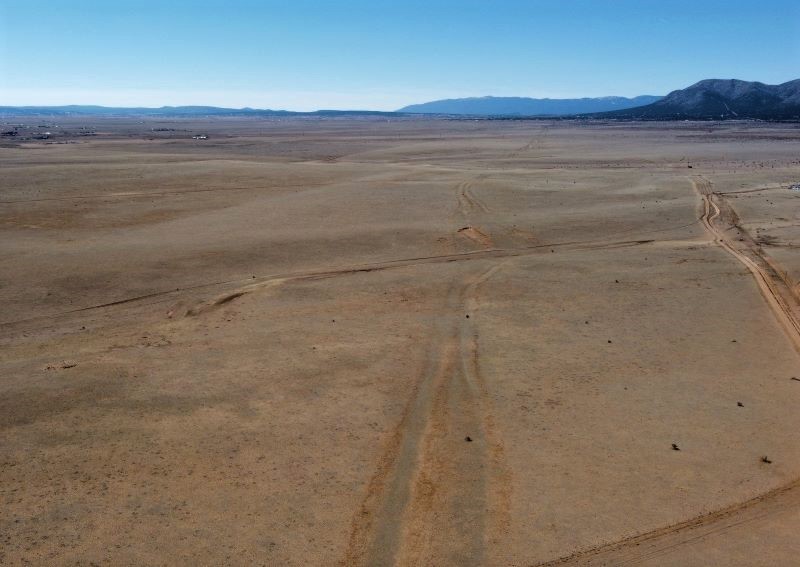 That’s the Stagecoach Road running right up the center of the picture!

But this is not the main point of this particular blog post or the end of our stagecoach route wandering adventure. One of the basic principles in the Wandering book is that when you wander, one thing always leads to another. And since the dogs and I had driven on an unpaved County Road (24C in Santa Fe county / B31A in San Miguel county) to reach the tract of State Land, we decided to follow the road east after we finished checking out the stagecoach route to see where the road went.

And what a great decision it was. The drive began through piñon-juniper country that transitioned into ponderosa pine. The road then dropped into a gorgeous canyon that broadened out into a wide valley. It was like dropping into a special hidden corner of the world. 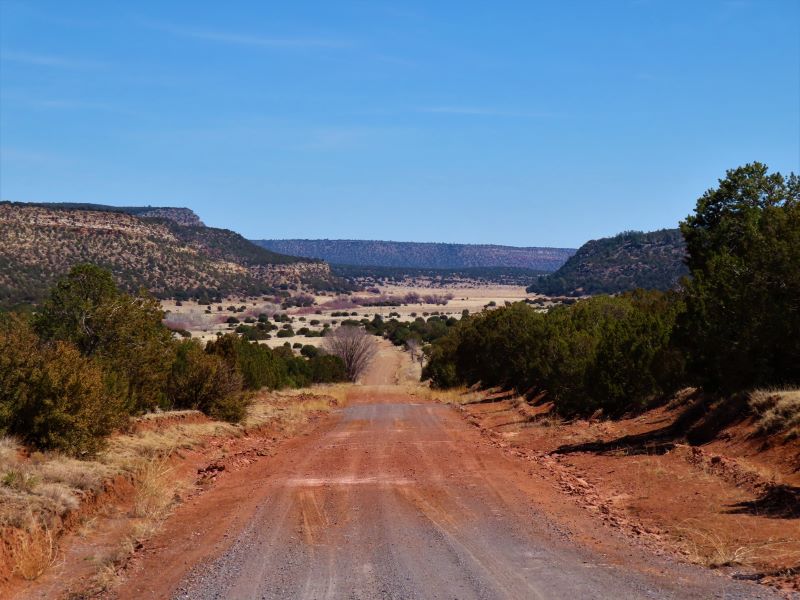 How about this for a surprise!

There were fence signs in the western portion of the canyon identifying nearby land as Cañon Blanco Ranch. Later, when I got back to my desk, I looked up Cañon Blanco Ranch on the Internet and found out that it is one of the many huge ranches owned by very wealthy people in the greater Santa Fe area. From what I could gather on the Internet, it appears that one of the ranch’s functions is to provide a place for its guests to hunt. According to a map of the ranch, the tract of State Land where the stagecoach route crosses has been leased by the ranch as an elk preserve. 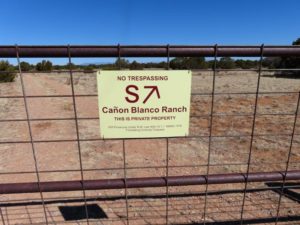 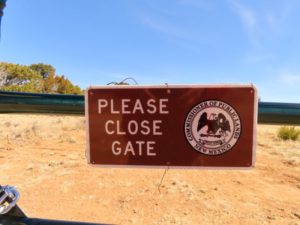 The Elk Preserve is behind this gate.

Please keep in mind that State Land is open to hiking and exploring even if the tract has been leased by an adjacent ranch – if and only if you have a Recreation Access Permit. If you don’t have a permit, you can be charged with trespassing and fined significantly. And when we hiked across the tract of State Land, we did see an elk – so the land’s current function as an elk preserve appears to be successful.

As we continued east along the road, we saw a few abandoned cabins and homesteads. A little bit further on there were a few adobe houses still being occupied. Off in a distant field there was even a small Catholic church to serve the community. 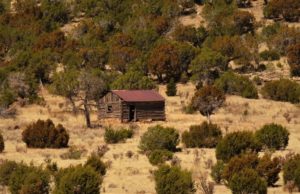 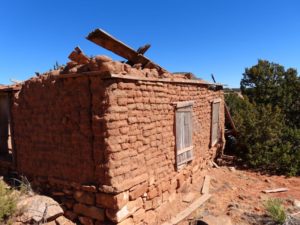 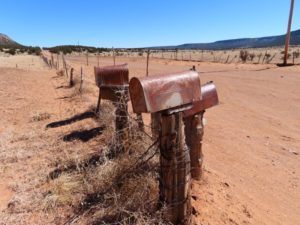 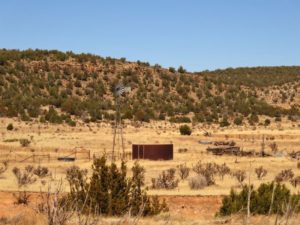 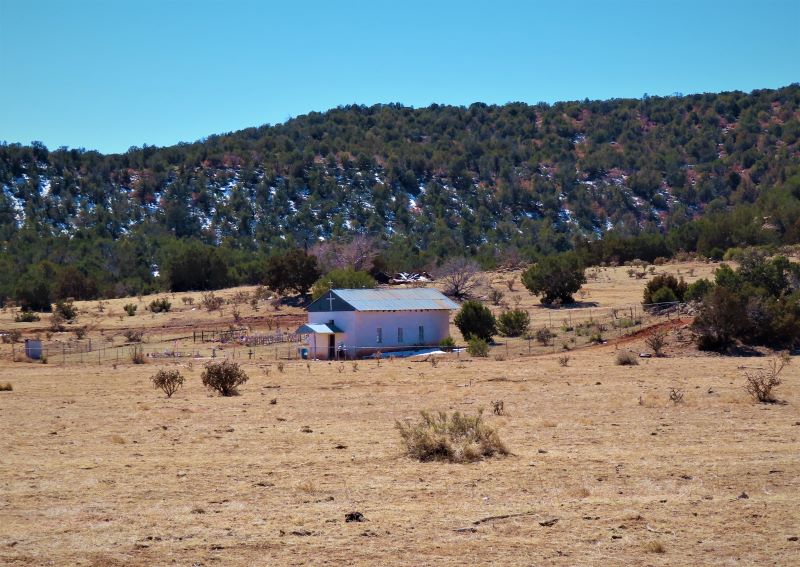 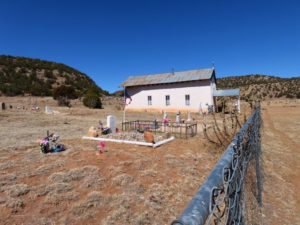 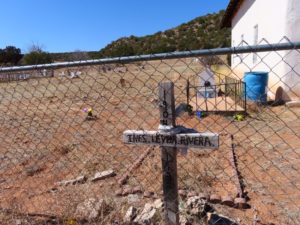 There is another place name at the east end of the valley identified as Gonzales Ranch. The Gonzales Ranch area has more houses than the Leyba area, but there is nothing in the form of services or businesses to call it a town. It does, like Leyba, have a church and cemetery – San Ysidro Church. (The topo map identified it as Santa Teresita Church.) 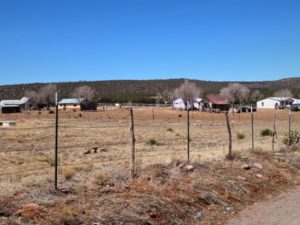 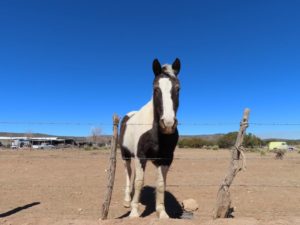 With plenty of horses to meet. 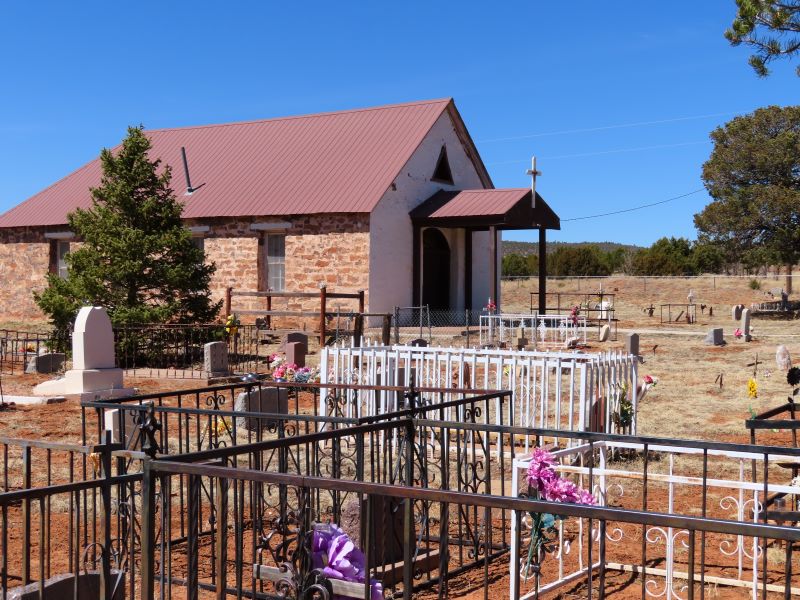 The church and its cemetery is by far and away the most interesting place to check out in Gonzales Ranch!

Walking around an old cemetery in an isolated community is an a wonderful experience and amazing place to discover folk art that truly comes from the heart. 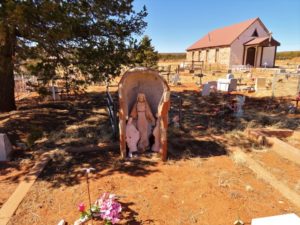 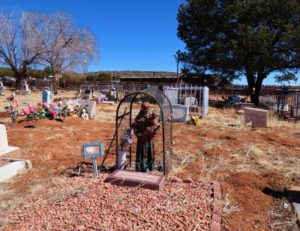 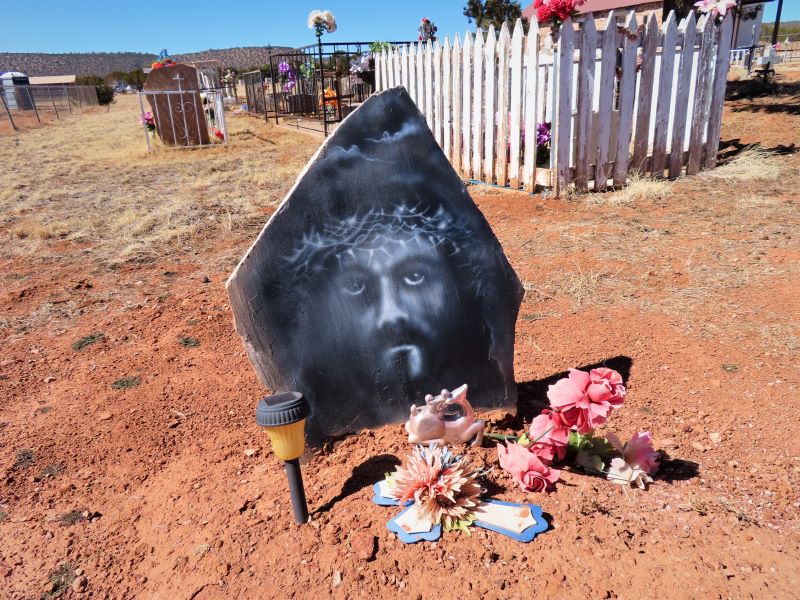 But no matter how you cut it, finding a beautiful isolated Shangri-La-like valley with a couple of old settlements, complete with their own church and cemetery, that are only connected to rest of the world by a dirt road, in my mind, is pretty cool. And that’s where, when you Wander one thing always leads to another.

In doing several searches, I finally found information about the route. When gold was discovered in California in 1848, hundreds of thousands of people wanted to get to California to take part in the Gold Rush. Some went by sea and sailed around the tip of South America. Others sailed to what is now Panama and then went overland to ships waiting on the Pacific Ocean side to complete the journey to California. And others went overland to the West Coast.

The United States Army was commissioned to develop wagon routes to California so they could escort the gold seekers on their journey west. One of the routes developed by the Army in 1849 went due west from Fort Smith, Arkansas. This is the route identified as the Old Stagecoach Road on the Albuquerque Land Status map. One of the nation’s busiest highways, Interstate 40 (less than 15 miles to the south), still runs due west from Fort Smith to New Mexico and then on to California.

Even better, I found an old Army map on the Internet (you can buy it for $950) showing the wagon route going through Cañon Blanco. The route emerges from the canyon in the tract of State Trust Land to continue west on its way to Albuquerque. 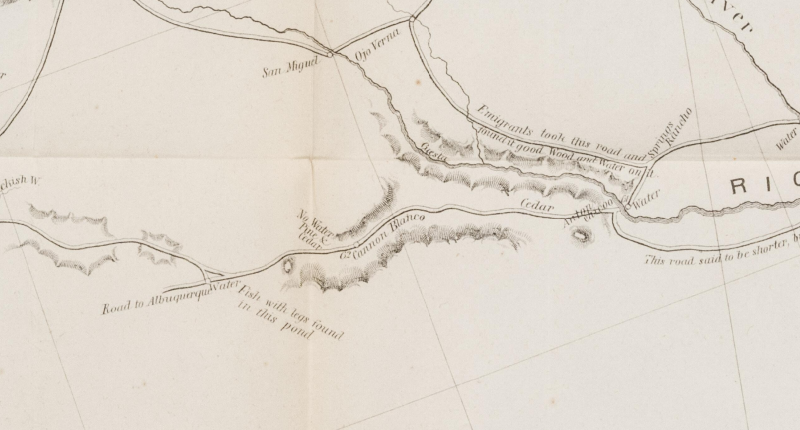 Check out the notation to the west about “Fish with legs.” They probably saw a tadpole making the transition to a spadefoot toad. 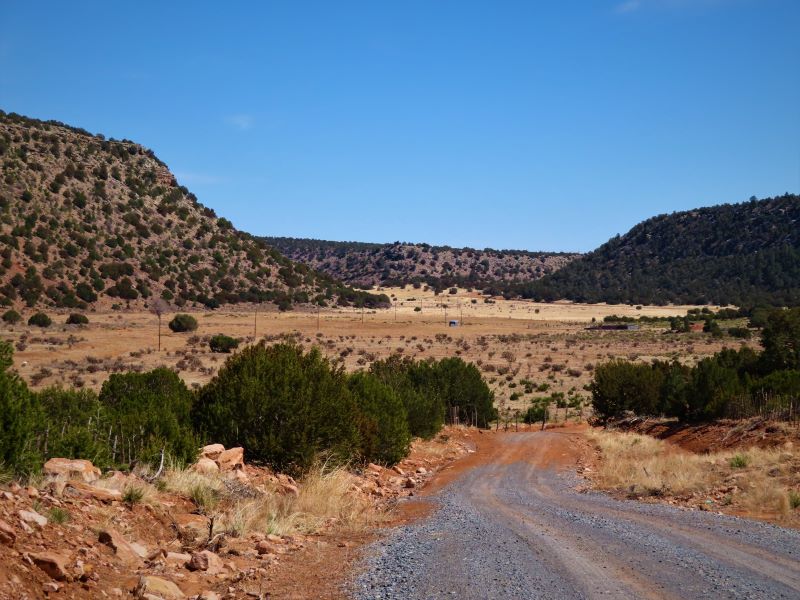 This is the way the Old Stagecoach Road would have come from the east. 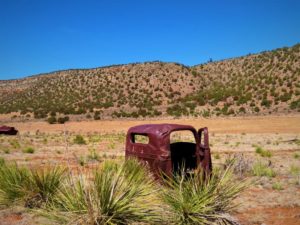 No trip to rural New Mexico can be considered complete without at least one abandoned truck. 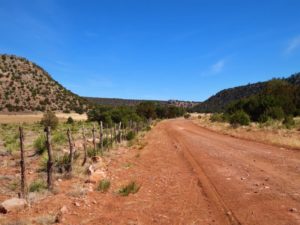 And with that the dogs and I left the valley to head back to Albuquerque.

I hope this blog post shows what’s possible when you develop the mindset of Wandering. Every time you step out the door can lead to incredible adventures. There is something to discover no matter where you go!