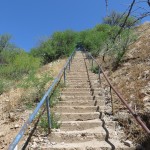 A little over two years ago, I wrote a blog post about the 147-step Keystone Stairway in Miami, Arizona. (Click here to read that post.) That post generated a few comments and some tips on finding other stairways in the Miami – Globe area of Arizona. After two years, my dog Petey and I finally got a chance to check them out last week.

Our first stop was the mining town of Globe, Arizona on Highway U.S. 60 about 90 miles east of Phoenix. Our tip was to look for a stairway at the end of Apache Street and on Sutherland Street. We found both stairways and some other surprises.

We parked on Apache and found a sidewalk running perpendicular to the end of the street. 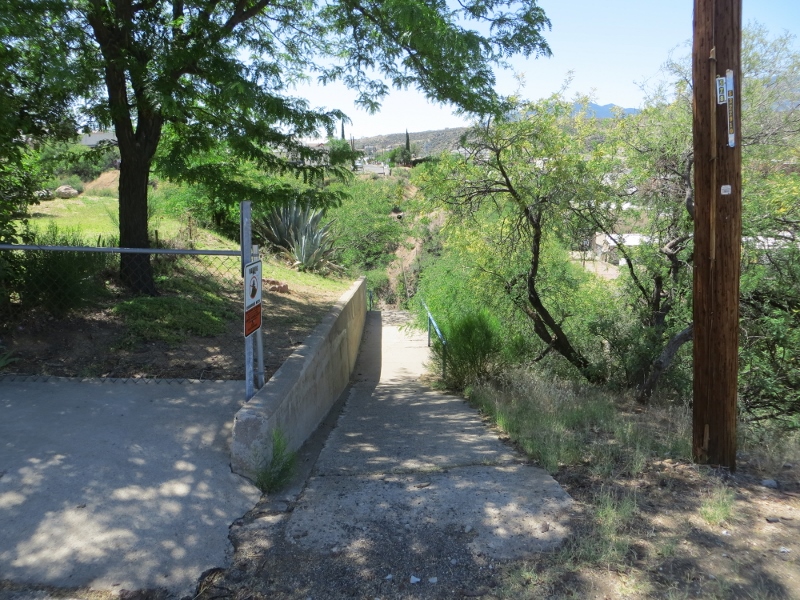 This is the sidewalk at the end of Apache

We followed the sidewalk to the 82-step Apache stairway. Unfortunately these stairs seem to be neglected and do not appear to get much use. 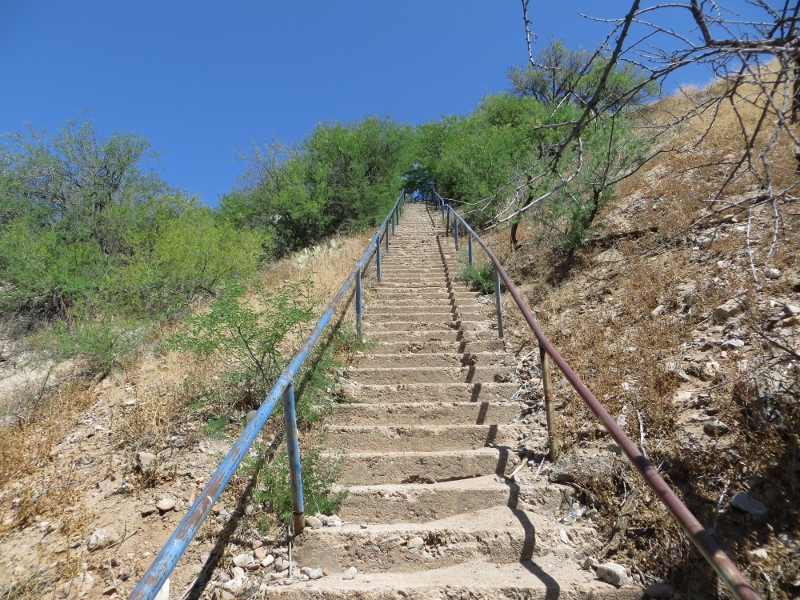 As you can see, the stairs do not get much use

The stairway was probably built before everyone over the age of sixteen decided to run their errands by car rather than foot. That’s too bad because there is so much to discover when you wander on foot. 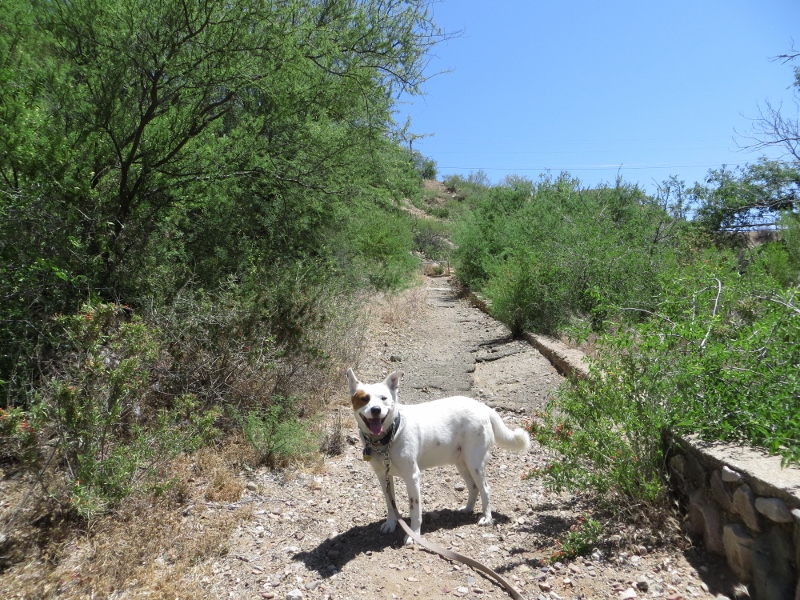 This is the path at the bottom of the Apache stairs. It leads to an unpaved parking lot off the main road.

After reaching the bottom of the stairs, Petey and I decided to take a walk and wander around the area. The first thing we spotted was a labyrinth that someone had built in their backyard. 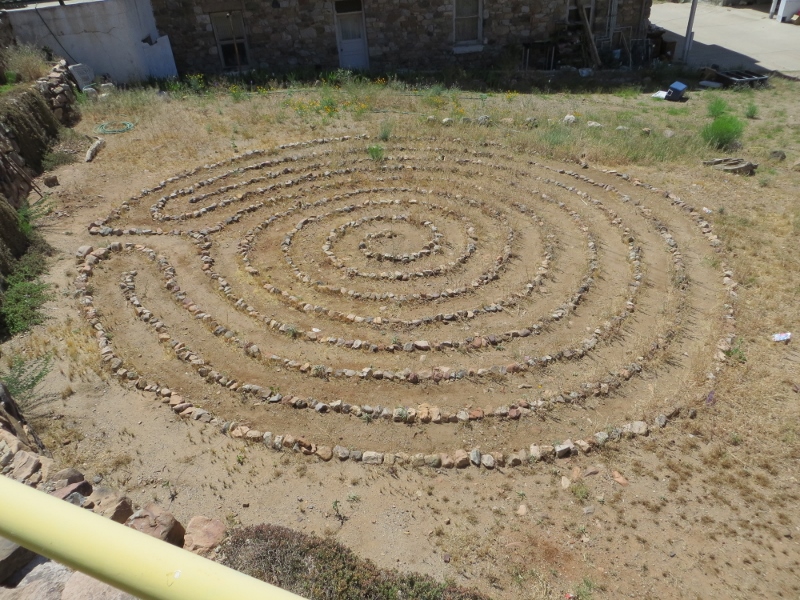 This labyrinth was very cool.

As we continued along we saw cactus, different types of flowers, and plenty of buzzing bees. We even found a couple of small stairways we were not expecting to find. I would guess that there are others if we had taken more time to look for them. 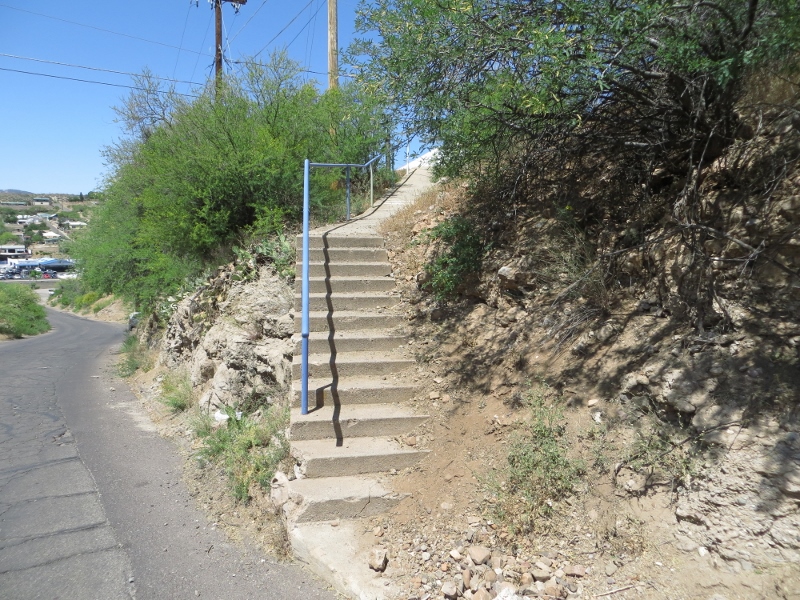 We were not expecting to find this short stairway.

We finally circled around to Sutherland to walk across a deep arroyo on a footbridge and 30-step stairway on the east end of the bridge. The Sutherland footbridge was just around the corner from the Apache stairway. 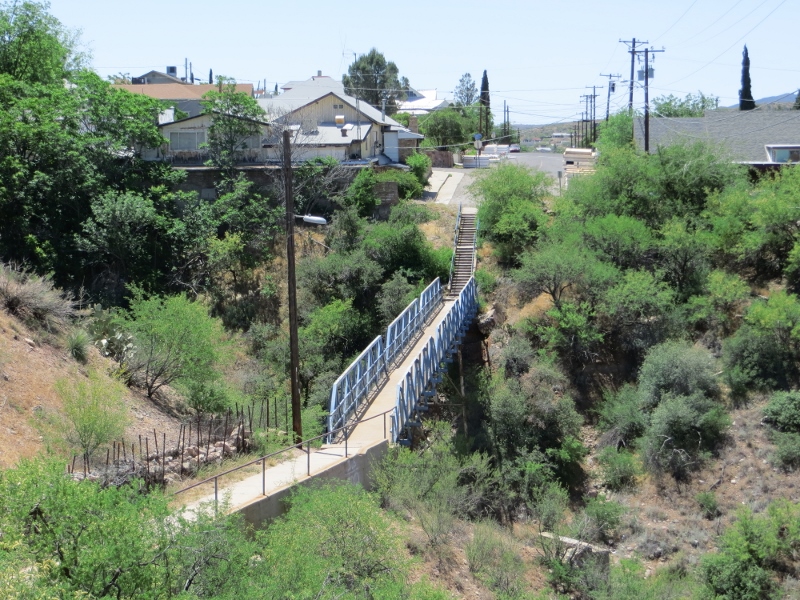 This is a great short-cut. I hope neighbors appreciate it.

Rather going right back to the car, we continued walking and circled around so we could finish our brief visit to Globe with a climb up the Apache stairway. We then hopped in the car drove seven miles west on U.S. 60 to Miami, Arizona. Miami, like Globe, is an old mining town.

In Miami we hoped to check out stairways at Forrest and Latham streets near where they cross U.S. 60. We found Forrest Street a couple of streets west of the Keystone stairs and parked the car. The Forrest stairs were just south of U.S. 60 and easy to find. So we got out of the car and started climbing. 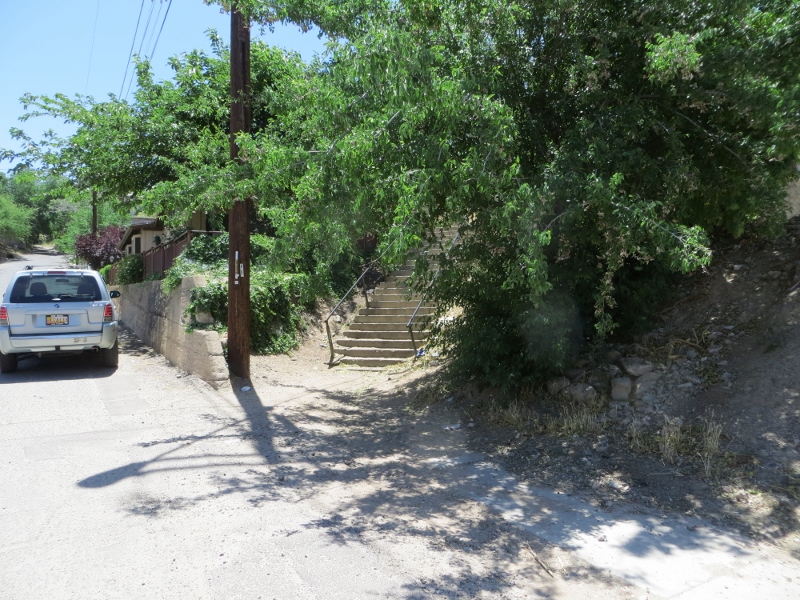 This is the bottom of the Forrest stairs. 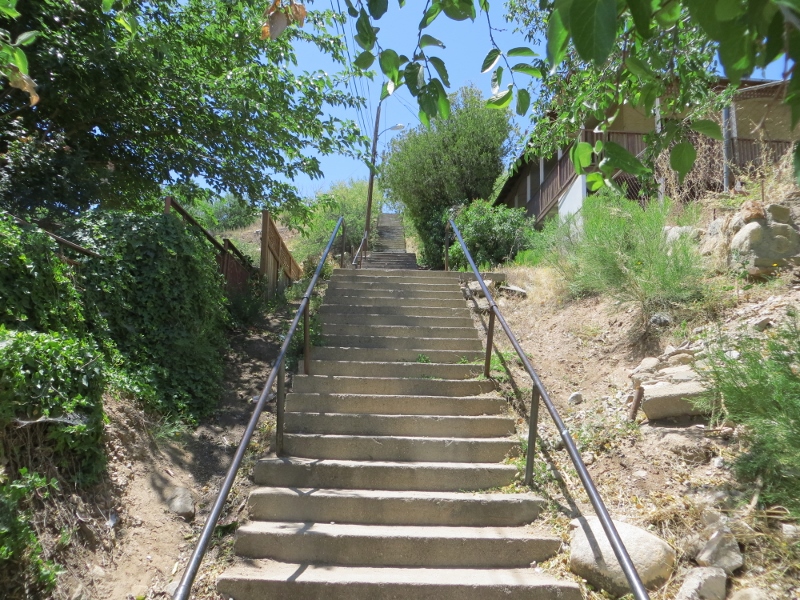 The Forrest stairway has 112 steps.

The stairway had 112 steps and a house along the way. When we reached the top we had great views of the mining area and saw a now-closed Catholic school at the end of the street. As we walked towards the school we could hear the distant sound of a train blowing its horn. Hearing what’s around you is a big part of wandering. 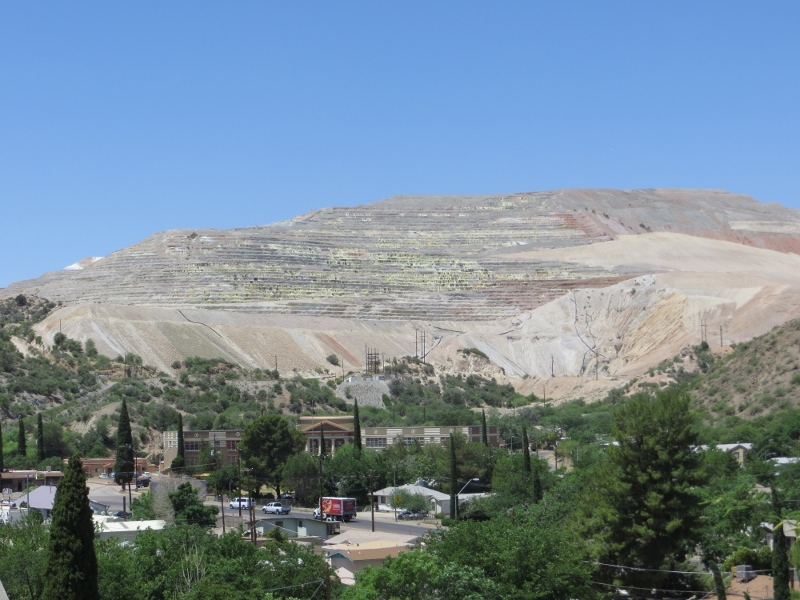 Freeport-McMorRan, the mining company, is restoring the mining areas to a more natural appearance.

Even better we found another stairway at 884 Rose Street that we were not expecting. That stairway had 50 steps and led us down to several houses and ended at an unpaved road that went back to where we parked our car. Instead of getting back in the car, we continued walking. 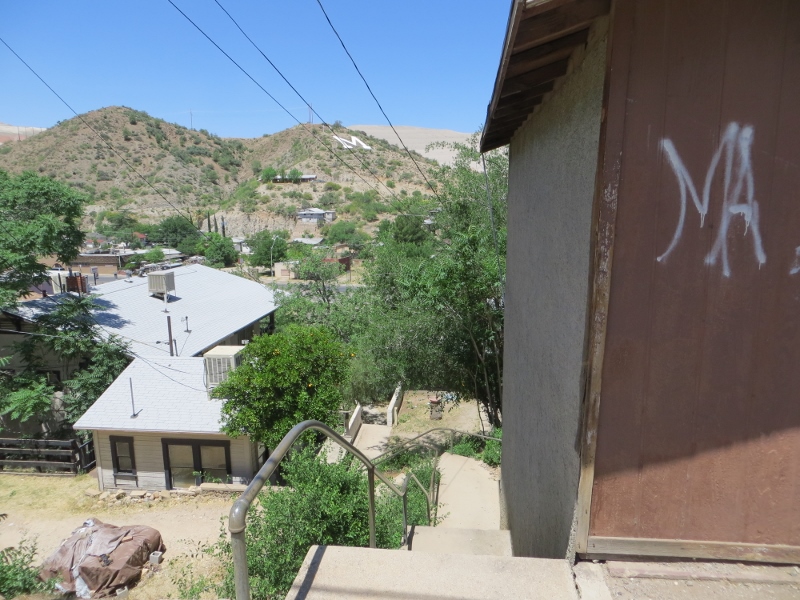 Along the way we passed an old Catholic Church built in 1915, probably for Italian immigrants. Old mining towns are always interesting to walk around as you can learn so much about the different people from around the world who came to work the mines. 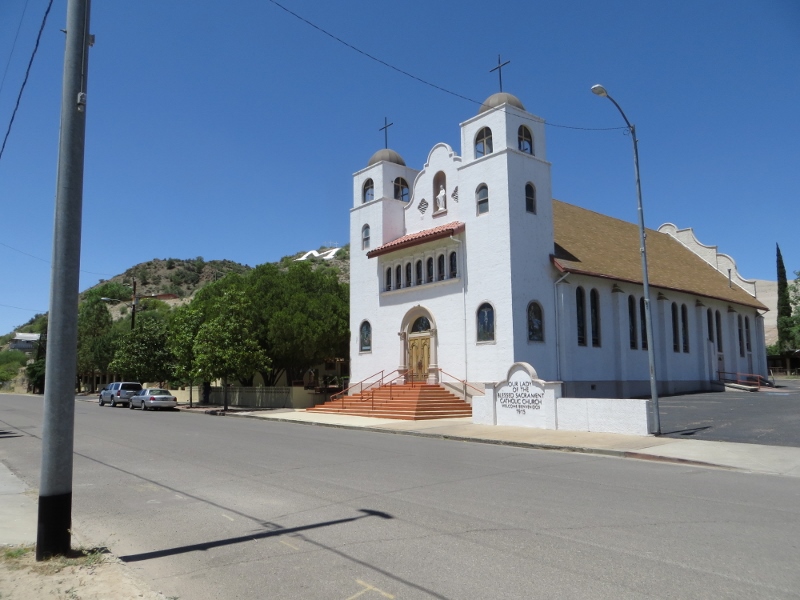 This is the church we passed.

In another mining town you might find an Eastern Orthodox Church for Serbian miners. If you explore the old mining towns of Michigan’s Upper Peninsula (the U.P.) or the copper mining town of Butte, Montana, you’ll find that pasties (pass-tees) are a local treat. They were brought over by Cornish miners. If you’ve never had a pasty, it is like a calzone except that it filled with meat, potatoes, onions, and rutabaga. They were what the miners ate for lunch.

Finns were another group that came to the U.P. to work the mines. When the mines closed the Finns stayed. And you can still hear Finnish language shows on the radio.  Without the mines and the diversity of the work force, we would never have these wonderful local traditions.

With us running out of time and having another stairway to climb, we went back to the car and drove to the Latham stairway, a few streets to the east. This stairway was a little trickier to find as the road where they were located did not have a sign. Nevertheless we found them without a problem. 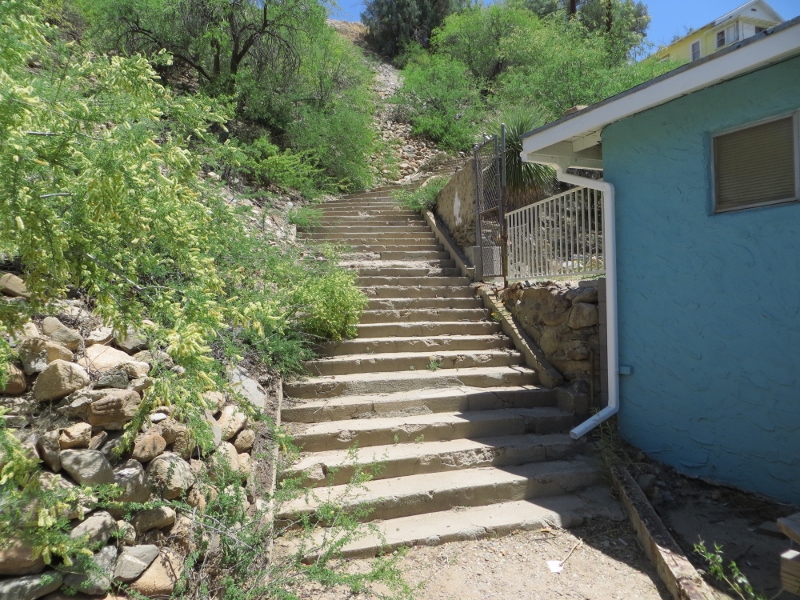 This is the bottom of the Latham stairway.

The Latham stairway had 122 steps and was in poor condition. It’s too bad because the stairs provide a great route from the top the hill to the businesses in town. 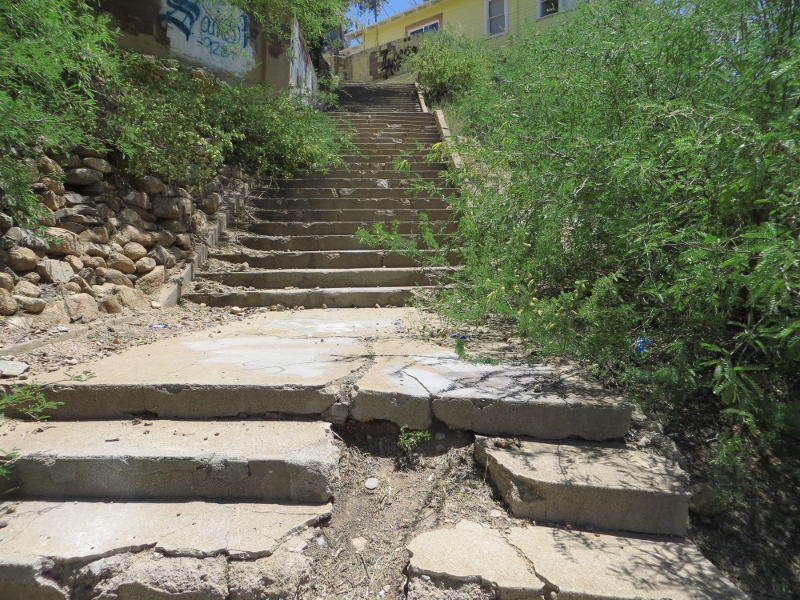 As you can see they are not in the best of condition.

With the last stairway climbed, Petey and I then headed south to Bisbee to complete our research for the upcoming Bisbee stair guide.