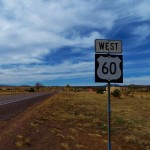 For my money, U.S. Highway 60 from Socorro, New Mexico to Phoenix, Arizona is one of the great two-lane highways in America. It is remote and full of surprises. It is a peaceful and relaxing drive where you don’t have to worry about heavy traffic slowing you down or large trucks blocking your view. When you leave Socorro, make sure that there’s gas in your tank as it will be almost 150 miles until you reach a town, all the way in Arizona, with full scale services and a McDonalds.

Earlier this month I had the pleasure to drive U.S. 60 again when I went down to Phoenix for a couple of Spring Training baseball games. The drive was wonderful.

The trip begins from Socorro with a brief climb out of mesquite and creosote bush country of the Rio Grande Valley. 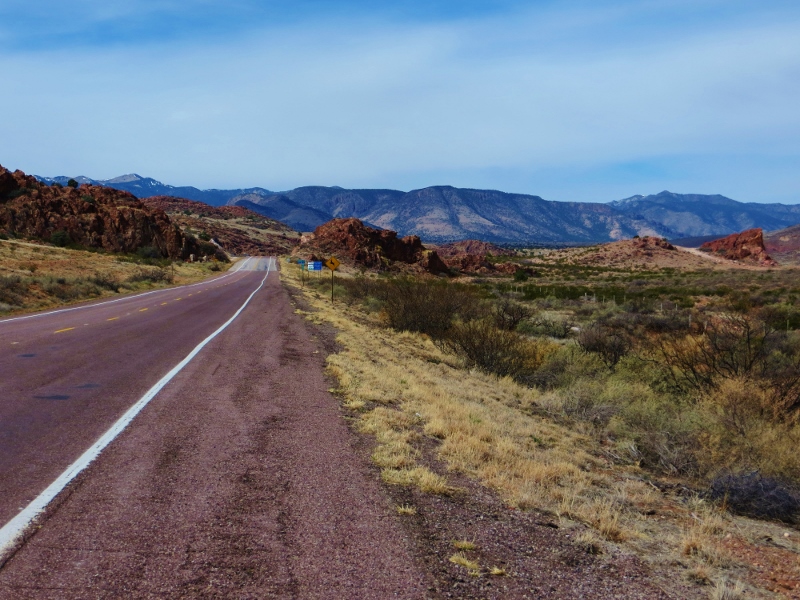 Very soon you’ll be in high desert grassland with 360 degree views around you. Sometimes if you’re driving east late in the afternoon, the lighting from the low angle sun will light up the texture of the land and it will take you’re breath away. 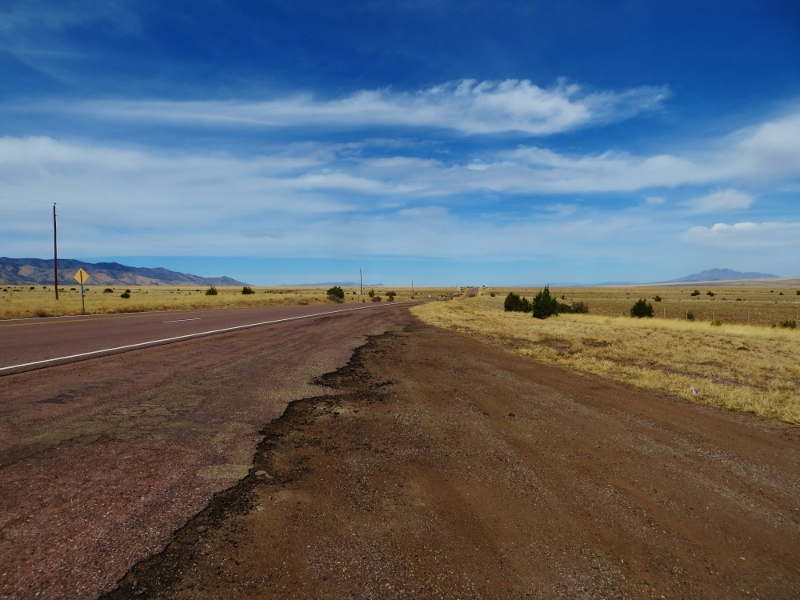 U.S. 60 soon comes upon the old mining town of Magdalena. The mining’s gone, but there are few art galleries and some places to eat. Normal retail is limited but there are a couple of interesting buildings from when it was a more active town. 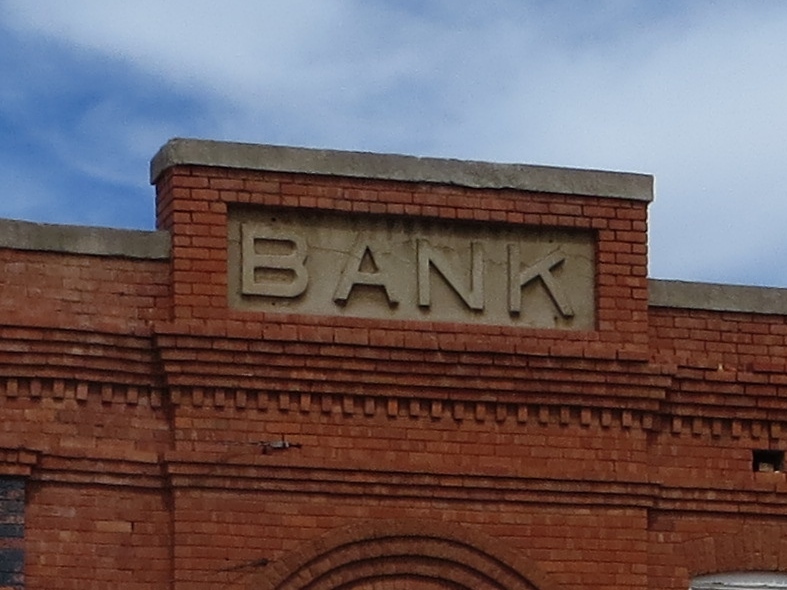 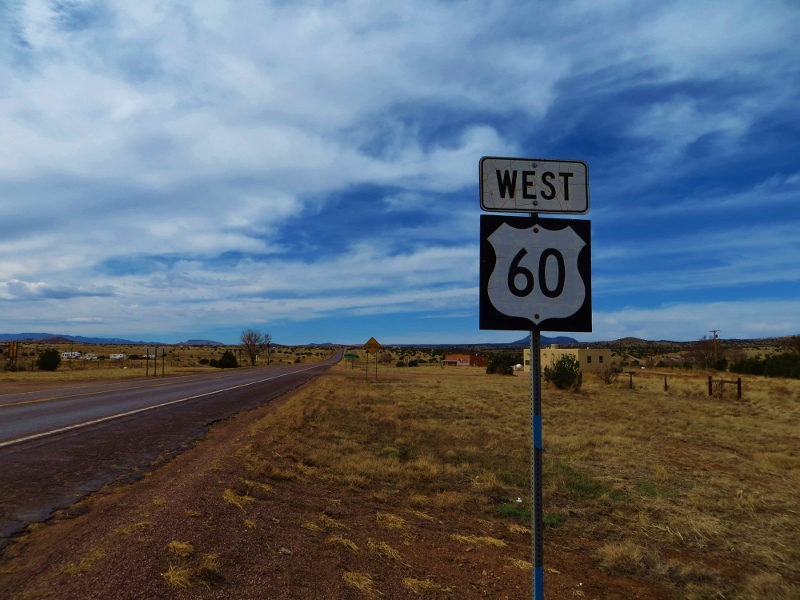 As you drive through the piñon and junipers there will be a vast grassland off in the distance. It is the Plains of San Agustin. 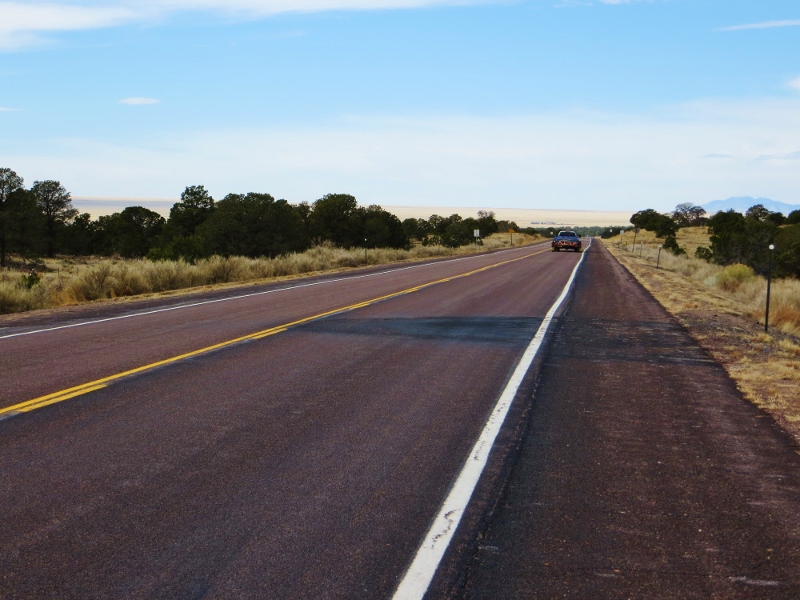 This is the home of the VLA (Very Large Array). If you have seen the movie Contact, you’ve see the VLA. It’s where Jodie Foster first heard signals from outer space.

I took my grandson to the VLA when he was still four years old. He had been tired and fussy that day and was taking a nap as we drove into the VLA. When I woke him up, he looked out the window and all he could say was, “AWESOM!” 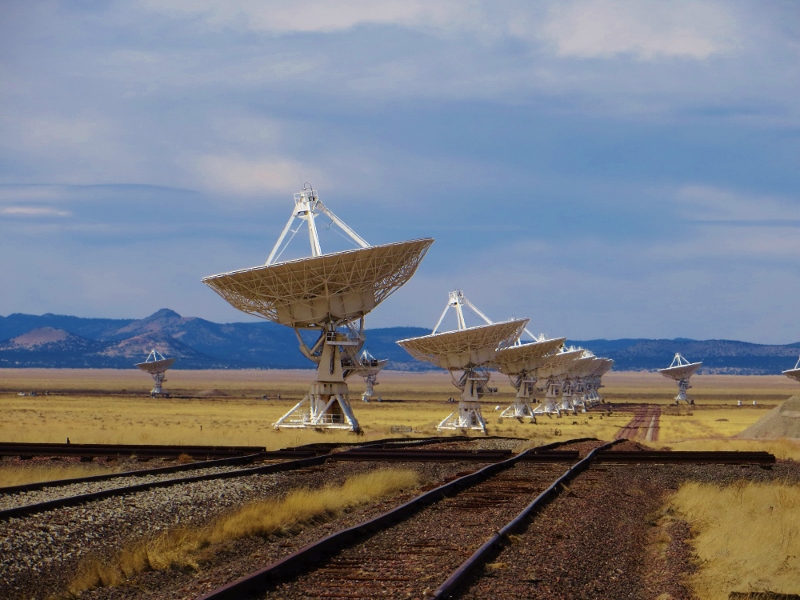 And the VLA is awesome! The radio telescopes are huge. Each antenna dish is over 80 feet across. The dishes can be configures in many different ways by dragging them over railroad tracks. The area available for the VLA is larger than many large metropolitan areas. 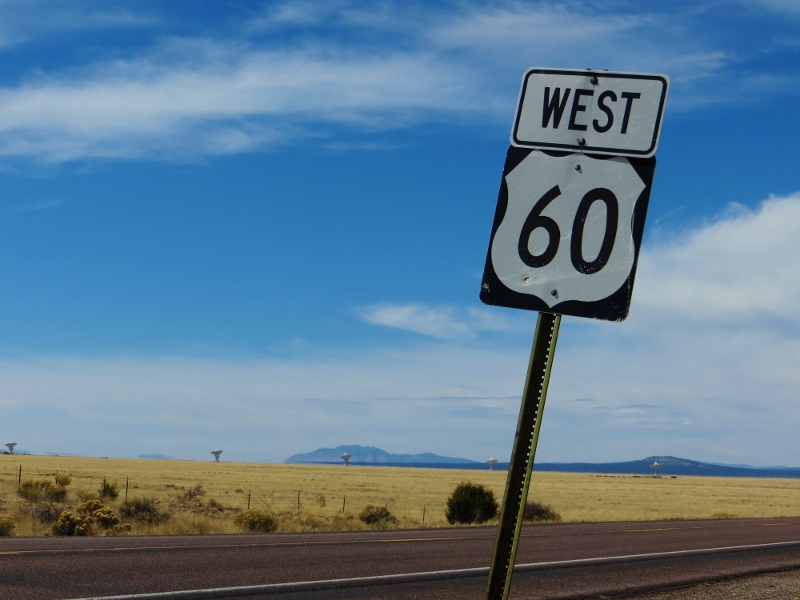 Not long after entering the ponderosa pines there will be a large monument to the left. I thought it might be the “Tomb of the Unknown Rancher.” 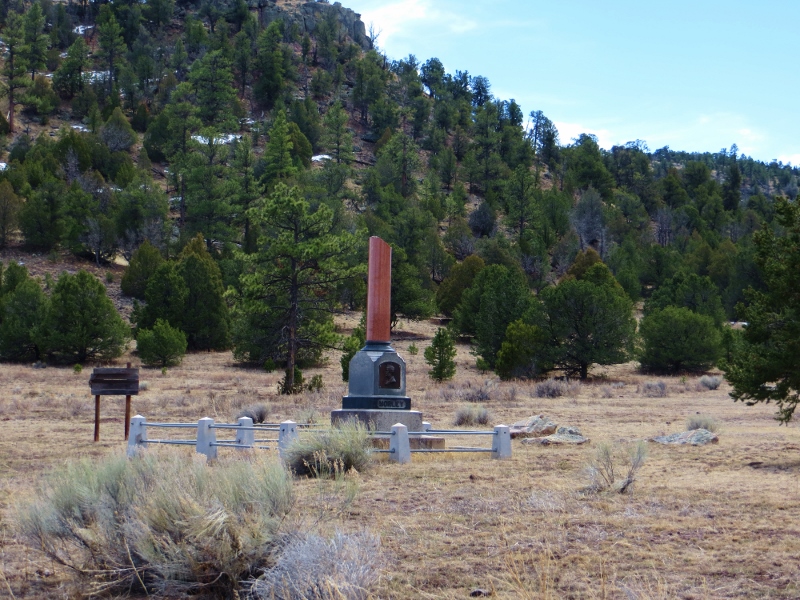 When I got out of the car to check it out, a sign on the fence said, “No Trespassing for Any Reason.” I did get close enough to see that monument was for a man named Morley.

How many times have you visited a town and seen a huge statue in a public park for a man from the late 19th century saying something along the lines of, “he was a true leader and visionary who will not be forgotten.” And you wonder to yourself, “who the heck was he.”

When I saw this monument, I started saying to myself, “My name is Ozymandias,…”

I soon hopped back into the car, went over the Continental Divide, and immediately ran into, 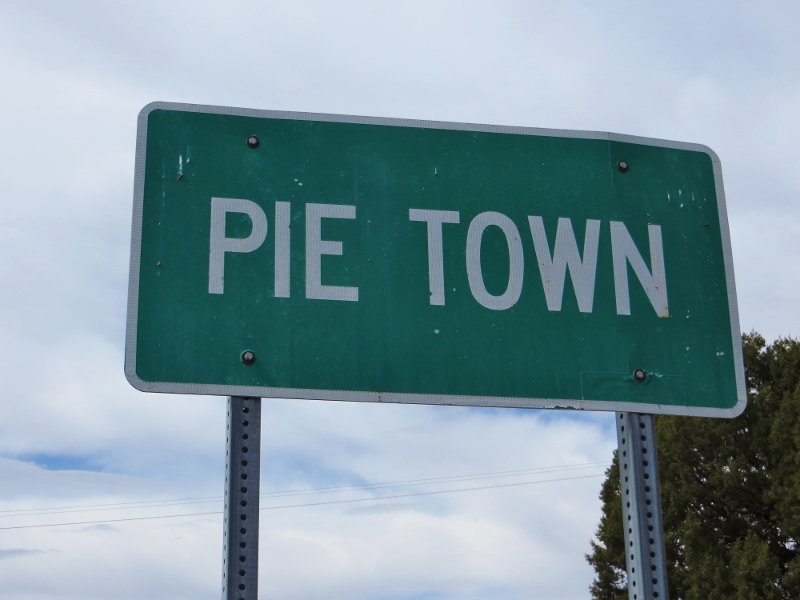 Pie Town is smaller than hamlet, but it is the place to eat pie. Places for pie have come and gone, but when I was last in Pie Town there was the Pie-O-Neer Café and the Pie Town Café. So on this trip, I first went to the Pie-O-Neer to get a piece of pie only to find it closed. 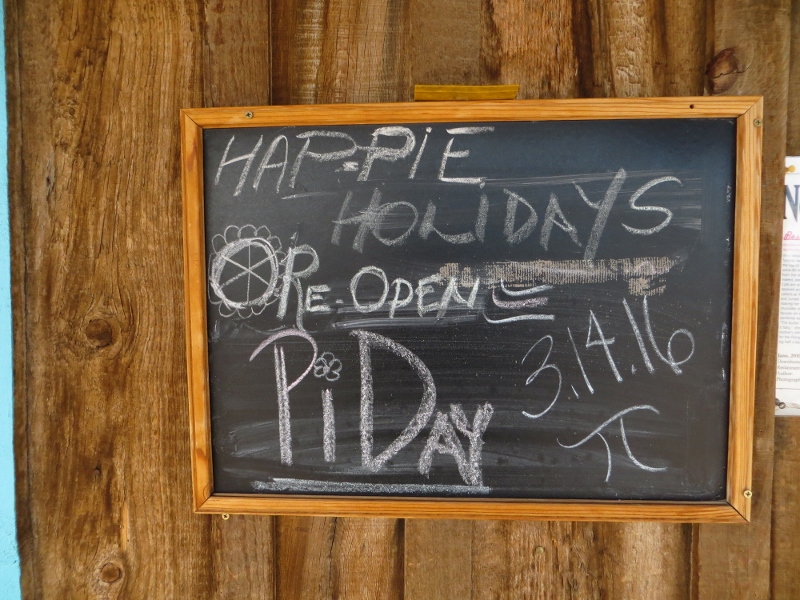 Unfortunately, I was there on March 5th, and they open for the season on Pi Day (March 14th). And speaking of Pi Day; where did you have pie on Pi Day?

Not ready to give up, I went to the Pie Town Café and found out that it was only open Sunday to Wednesday. Unfortunately, March 5th was a Saturday. Fortunately, Pie Town has a new pie provider, The Gathering Place, and they had an unusual business practice of being open on Saturday. 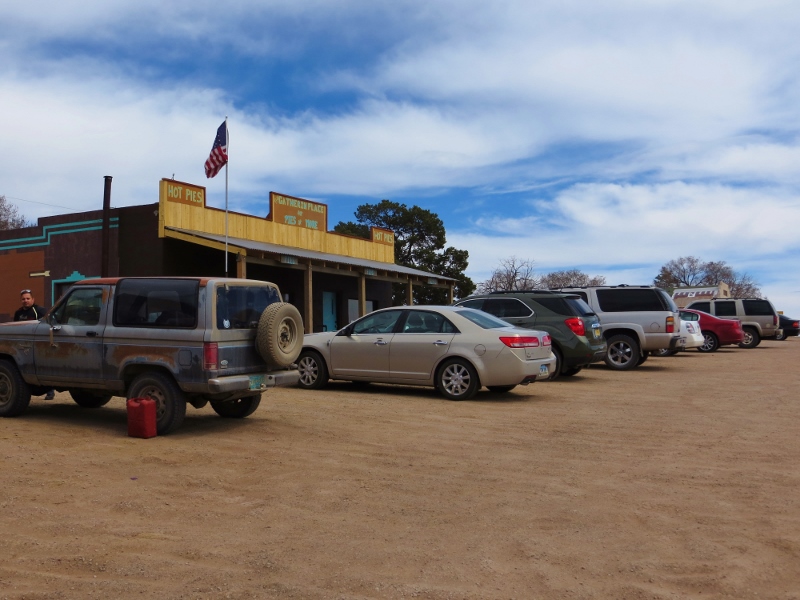 So with a little bit of diligence, I was able to have pie in Pie Town. And it was good!

From Pie Town, it is not too long before U.S. 60 enters Arizona and continues to pass through wide open countryside. 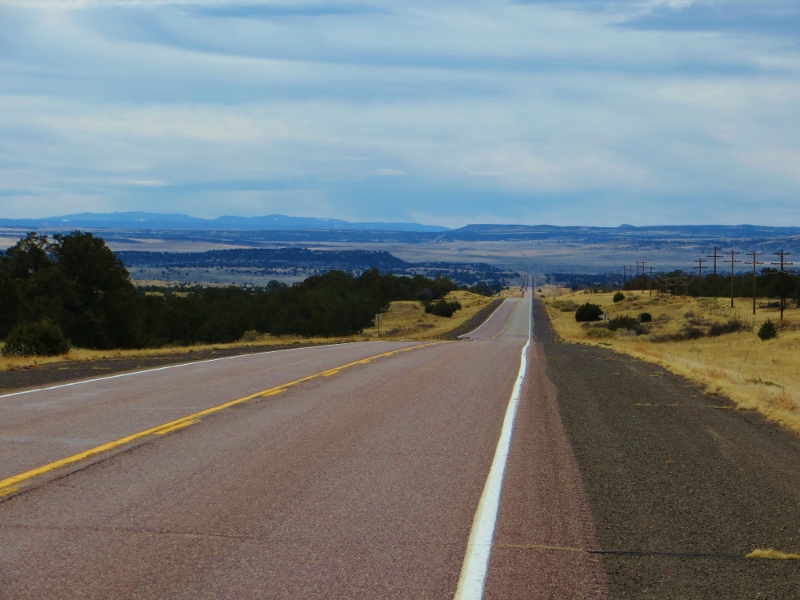 A few miles after crossing into Arizona, U.S. 60 reaches the first town (Springerville) since Socorro large enough to support a full service grocery store and a McDonalds. Not long after Springerville there is an even larger town (Show Low). After that you will be driving through a ponderosa pine forest in the White Mountains of Arizona.

Then without warning U.S. 60 runs into the Salt River Canyon. It is a spectacular surprise! 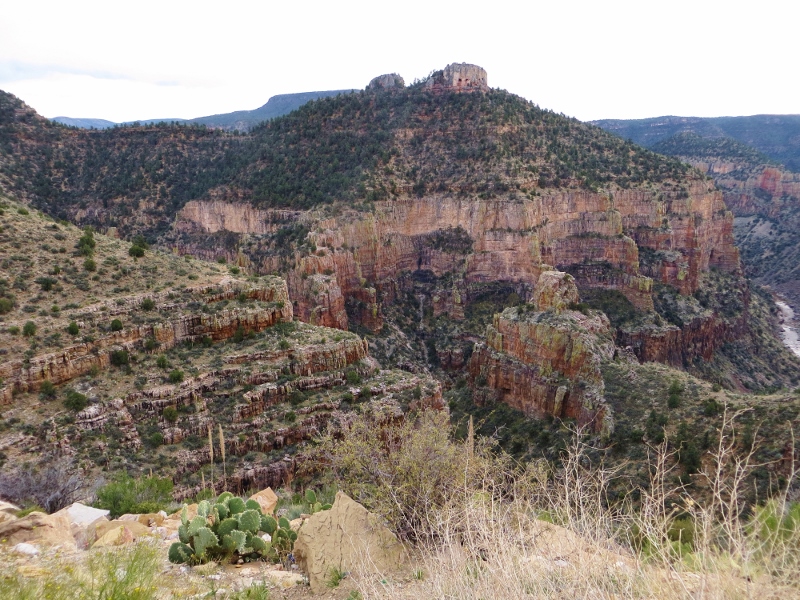 Even better, you’ll have to drive through it. 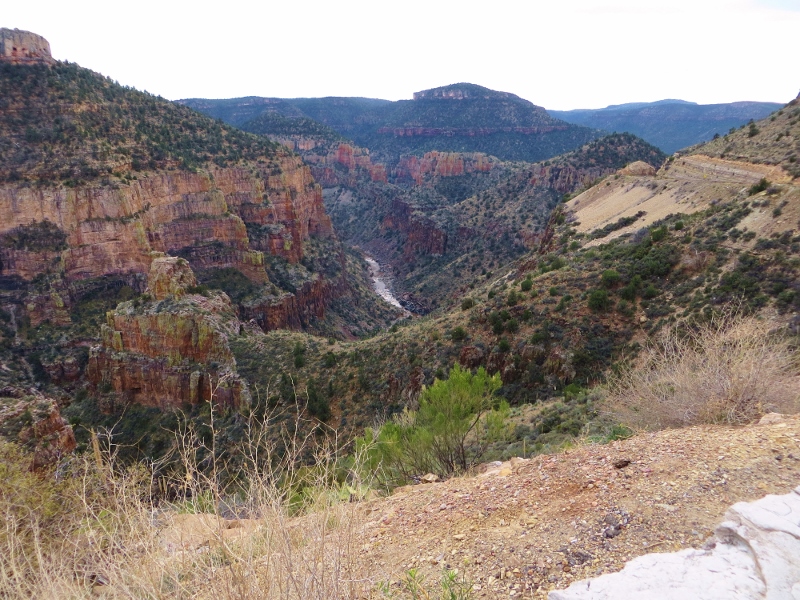 U.S. 60 goes all the way to the bottom and then back up to the top on the other side of the canyon. It is very cool to be able to drive inside a deep canyon like this. When I first drove U.S. 60, I had no idea that the Salt River Canyon would be there. It was truly an “oh wow” moment.

You’ll even see palm trees at the bottom. What a shock to go from ponderosa pine to palm trees in a matter of minutes. 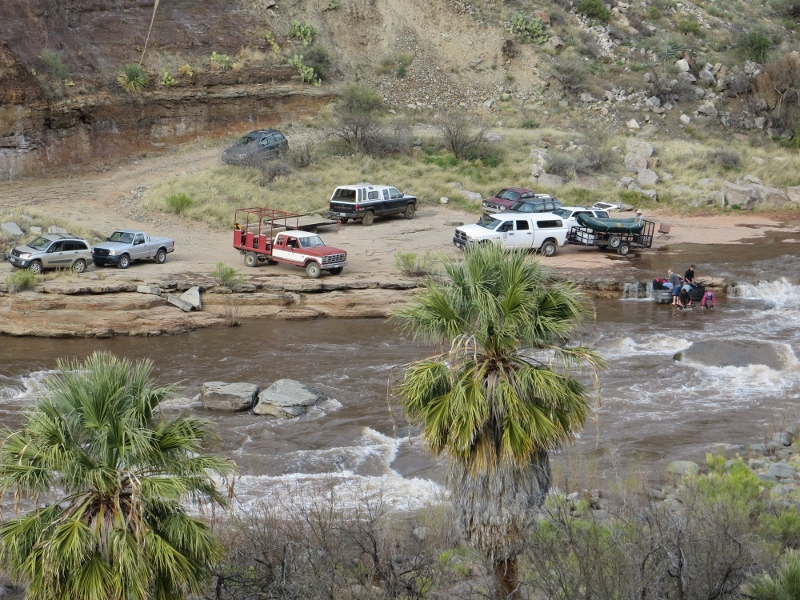 There’s a rest area at the bottom of the canyon and a stairway with 82 steps to take you closer to the river. 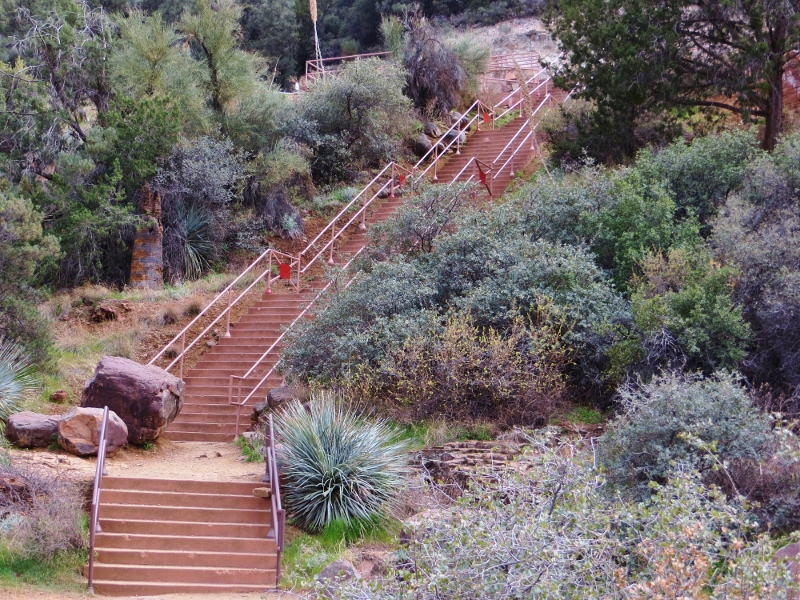 From there you can get spectacular views of the river and canyon. 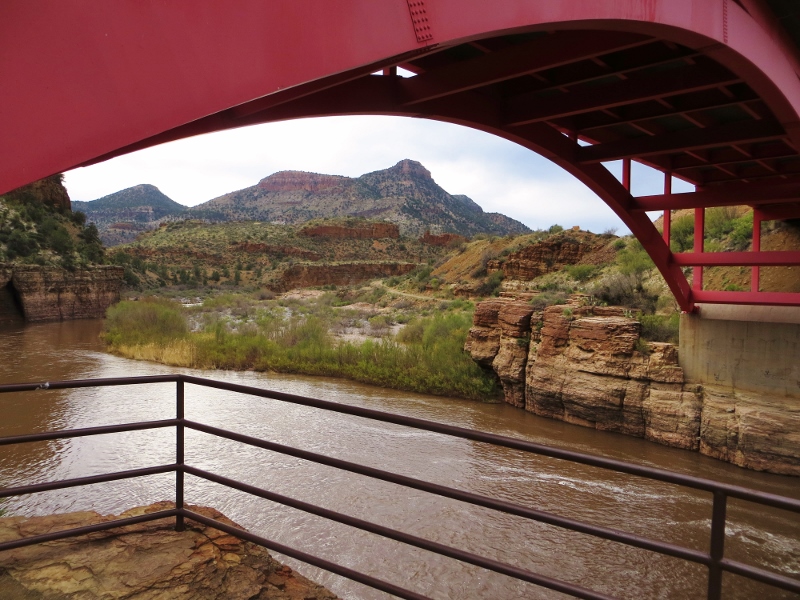 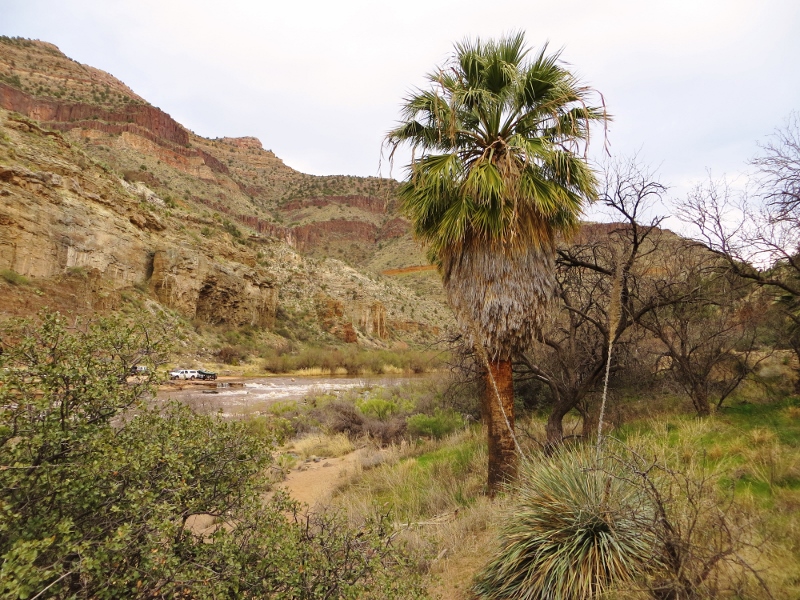 After the canyon bottom, U.S. 60 climbs out of the canyon and continues west. You’ll soon be in the Globe – Miami Mining District. 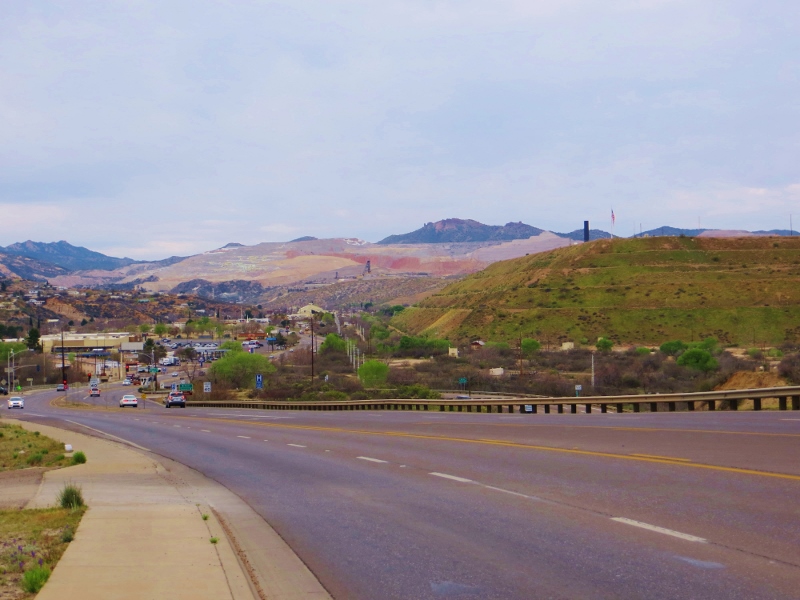 Mining and mining related operations are still active in the district. In recent years millions of dollars have been spent  for remediation to soften the appearance of the old mines and tailing mounds. If you are interested in climbing some old public stairways, you can check out the blog posts I have written about stairways in the area. (Just click on “Stairs” in the Category section of this webpage.

After passing Miami, U.S. 60 takes a nice gentle grade to leave the mountains. 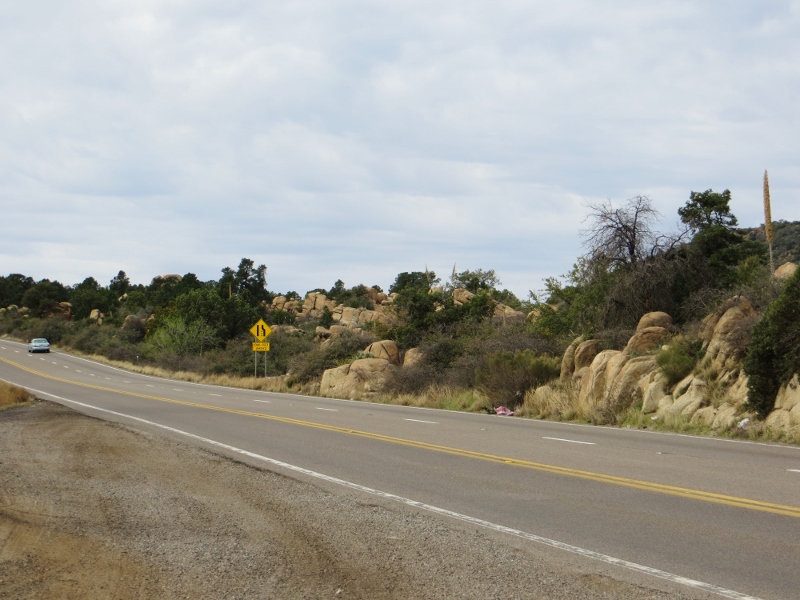 The road passes through some very dramatic gorges. I wish I could have taken more pictures, but there were very few places to pull over to take a picture. 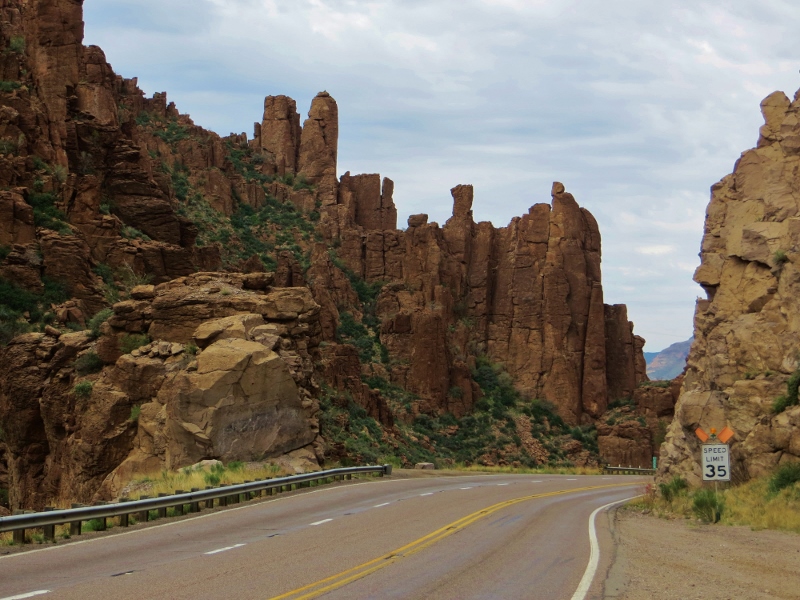 When U.S. 60 reaches the old mining town of Superior, you will be out of the mountains and at the eastern edge of Arizona’s Valley of the Sun. You will also be in the midst of wonderful Sonoran Desert landscape with Saguaro cactus and Palo Verde trees. 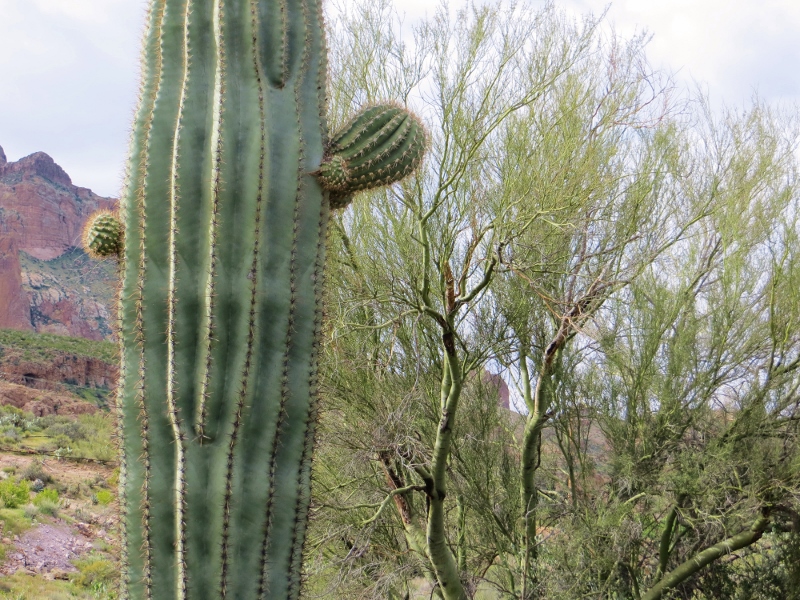 With it being early March, the desert was especially wonderful. 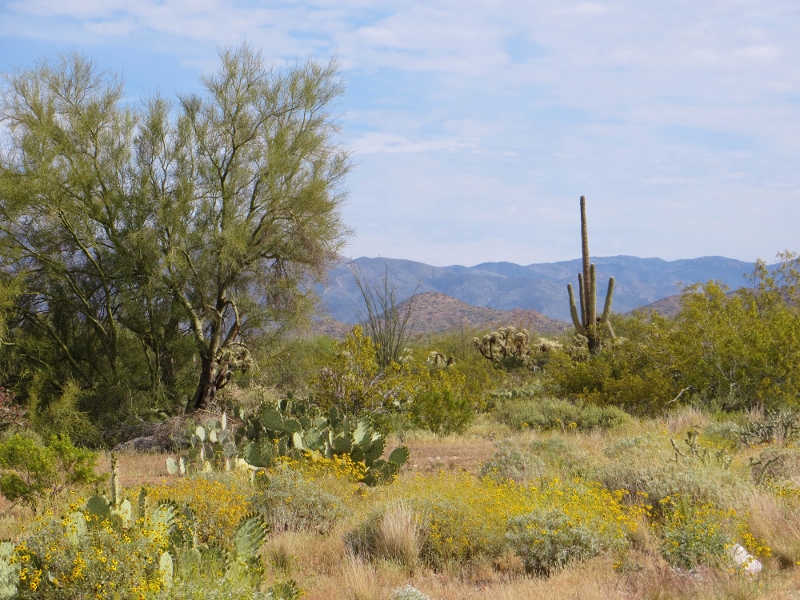 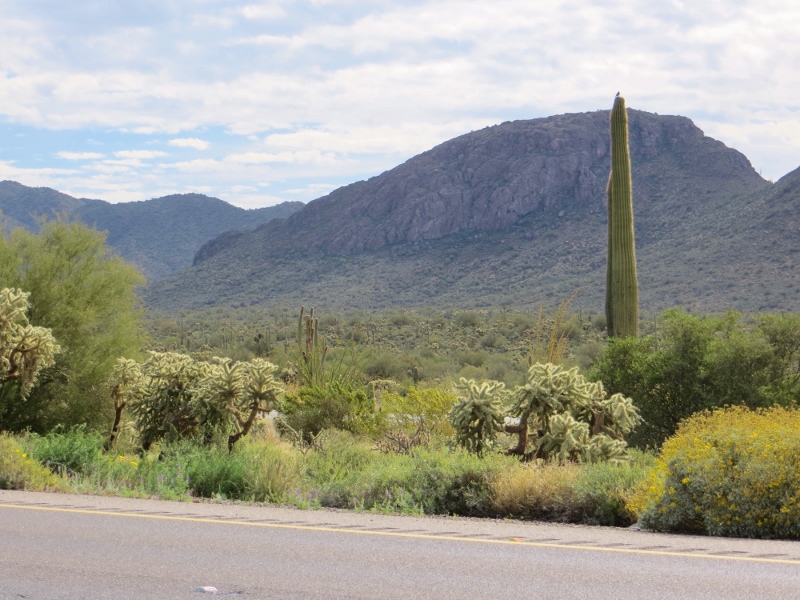 All too soon, U.S. 60 starts creeping into the outer reaches of metropolitan Phoenix and before you know it U.S. 60 becomes a major freeway with six lanes in each direction. At that point you will have completed one of the nation’s greatest two-lane road trips.

I hope you get the chance to make this drive. You won’t regret it.