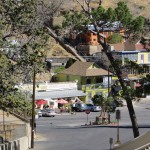 A little over a week ago my dog Petey and I spent a few days climbing stairs in Bisbee, Arizona. We took many notes and made an inventory of the stairs for a possible guide to the Bisbee stairs.

A stair guide should be a natural for Bisbee, because if you like to climb stairs and to explore a funky town at the same time, Bisbee is the place to go. As you walk around, I think you’ll find Bisbee to be one of the most interesting and, perhaps, the funkiest small town in the country. 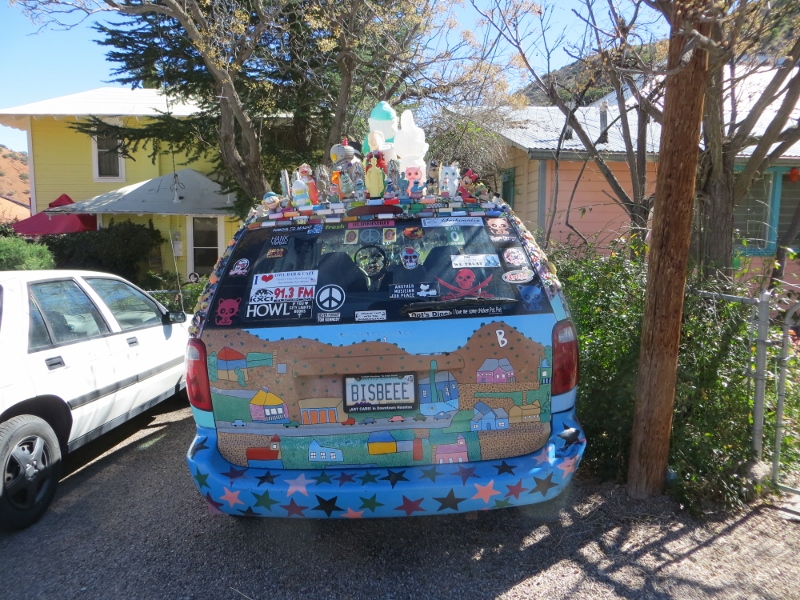 This car only scratches the surface on Bisbee’s funkiness. 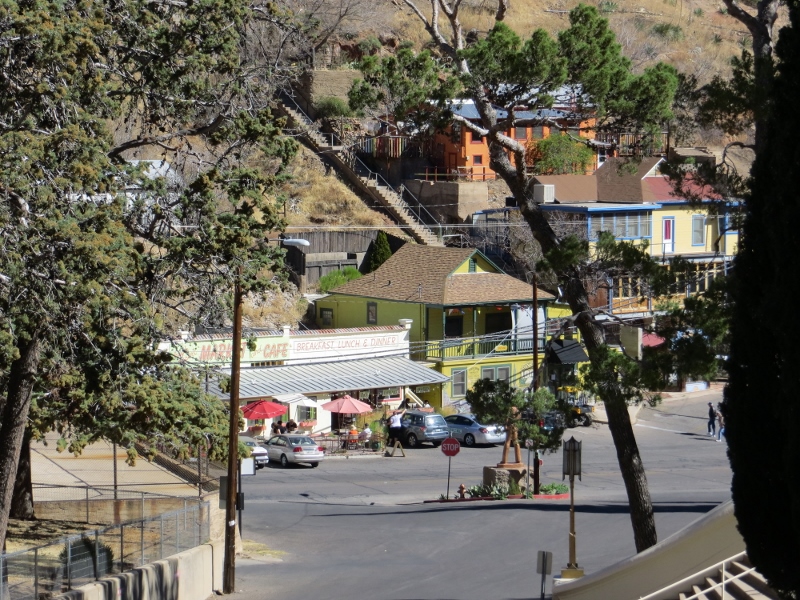 You can see an example of Bisbee’s stairs in the background.

Bisbee’s stairs and funkiness are a direct result of its setting and its history. The original part of Bisbee is set within two watersheds that join in the center of town. When a very significant mineral deposit was discovered in the late 19th Century, miners started building their homes on the sides of the watersheds.

Because of the steepness of the slopes, very few roads were built. The only way to reach the houses was by foot trails. As the huge size and quality of the copper deposits became known, the town business center and the homes on the hillside became more substantial. The footpaths to the homes evolved into wooden steps.

As can be expected, the Great Depression of the 1930s killed mining and hit towns like Bisbee hard. To help create jobs the Works Progress Administration (WPA) initiated many construction projects throughout Bisbee. 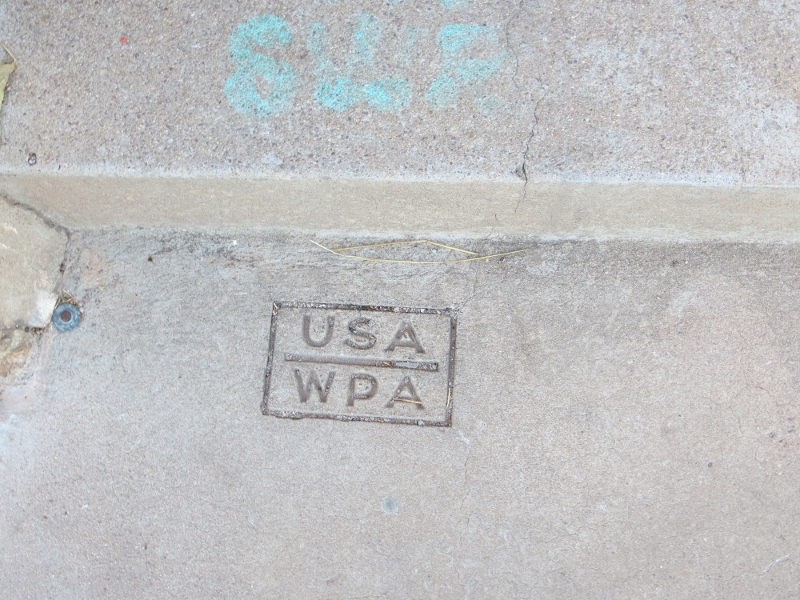 Here is an example of WPA stamped into the concrete. You’ll see this almost everywhere you walk.

When mining ceased in the mid-1970s, the miners left and the price of homes collapsed to almost nothing. Artistic and counter-culture types took advantage of the housing bargains and began to move in. As a result, houses were repaired, redecorated, and given their own unique and special funky identity. As you walk around Bisbee you’ll have the feeling of walking through a continuous string of personal Shangri-Las complete with their own folk art exhibit.

This funkiness began to attract more people, some of them with substantial resources, to add to the mix. The result today is a mix of houses that range from boarded-up hovels to almost elegant homes. All of them within walking distance of each other and almost all of them special in their own way.

Bisbee has promoted its mining history and funkiness to become a popular tourist destination. Bisbee even promotes its stairs by hosting an annual run that includes running up nine of its stairways.

The run is called “The Bisbee 1000” for the 1000 steps you’ll climb on the run. The race is advertised as the 5K that feels like a 10K. It is held on the 3rd weekend of every October. You can visit www.Bisbee1000.org for more information on the run. 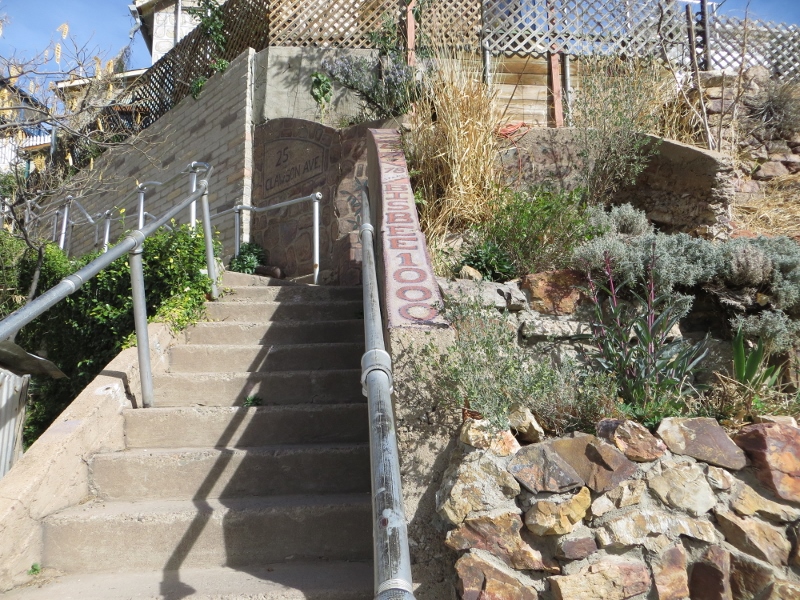 Here’s one of the stairways on the route of the Bisbee 1000.

When you visit Bisbee, you might find the center of town to be a bit busier than you may want. But if you walk just one block away and start climbing the stairs, you’ll find a quiet and visually stimulating adventure. Whether you walk for a day, or for only a couple of hours, you will find yourself on an adventure like nowhere else in the country.

Here is a small sample of what Petey and I saw on our adventure: 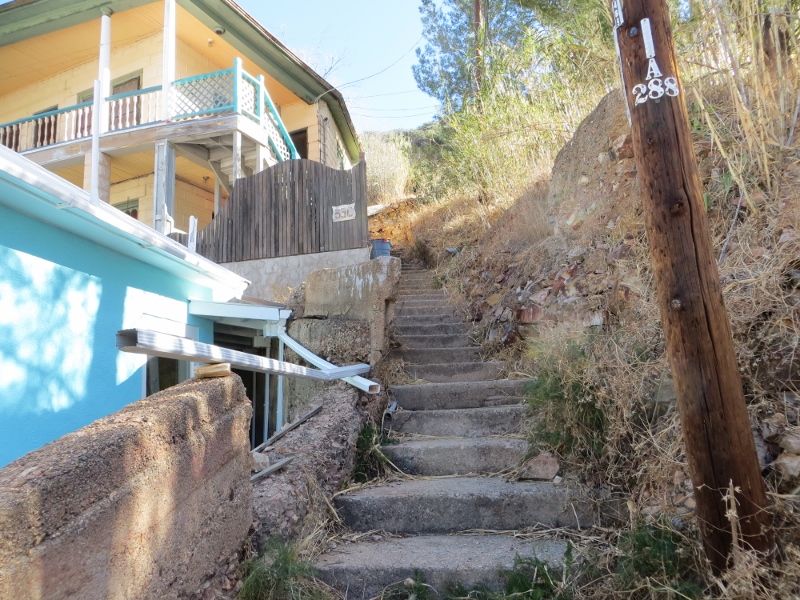 As you climb stairs, you’ll find that some wind around to reach houses. 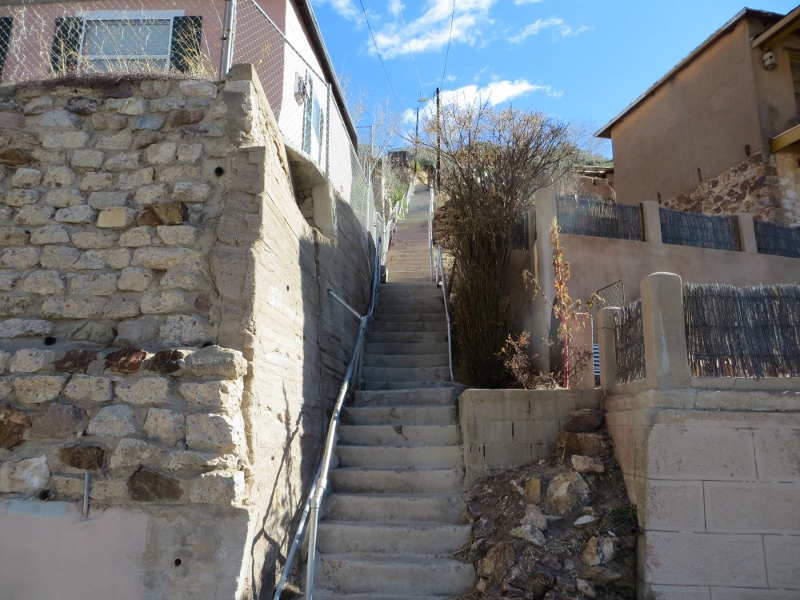 Other stairs go straight up the hillside. Altogether Petey and I climbed over 70 stairways for over 5700 steps. 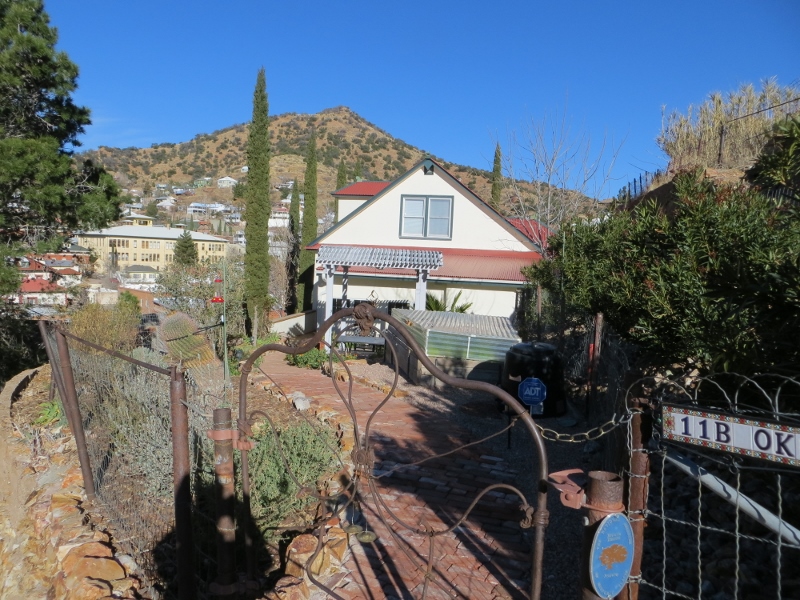 The stairways all led to houses or something else of interest. 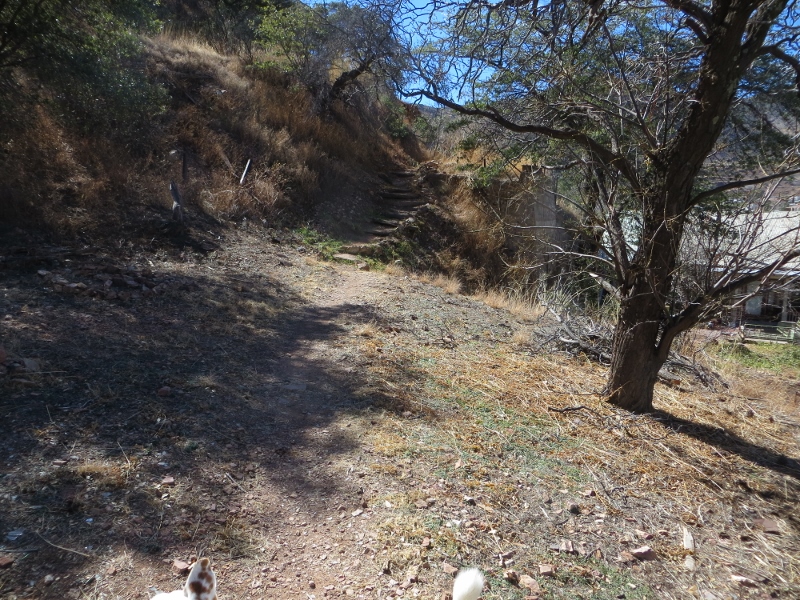 Some stairways led to paths. 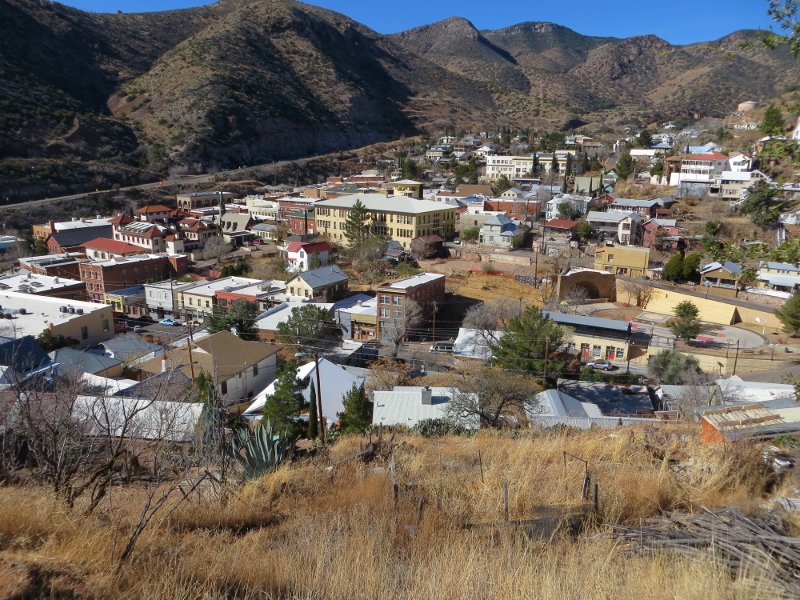 The paths took you to where you could look down on the town. 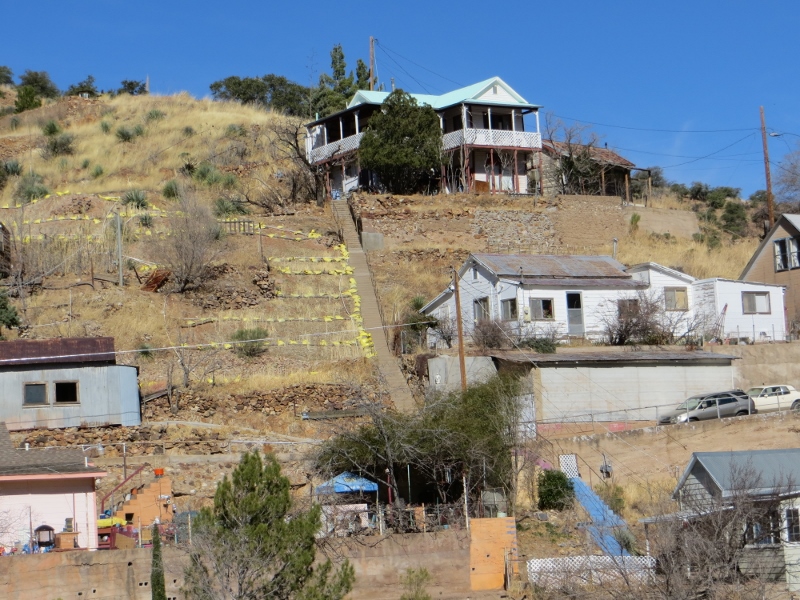 The only way to get to the houses above the street is by stair. As you can see size and state of repair of a house can vary. The yellow sandbags is where the mining company, Freeport McMorRan, removed the soil to clean it of toxins. 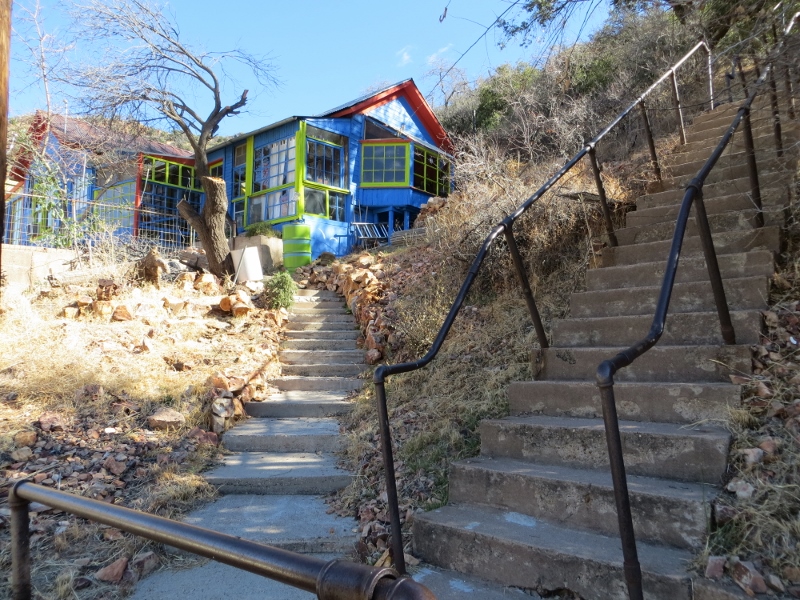 As you climb the stairs you’ll find smaller stairways branching off to reach individual homes. 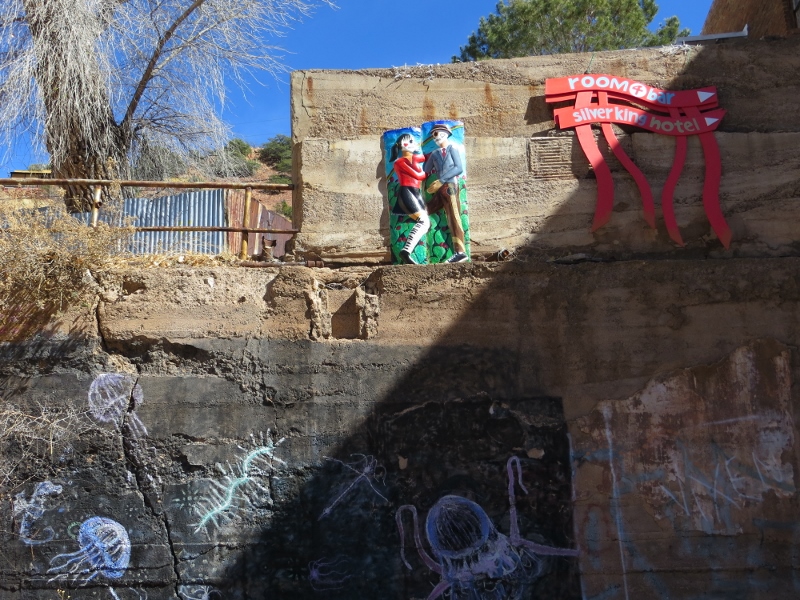 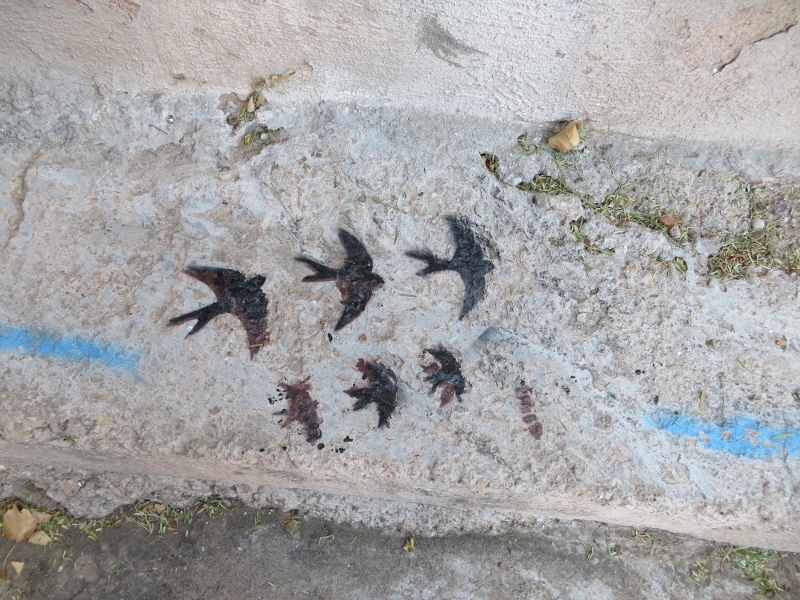 Even stenciled on a step. 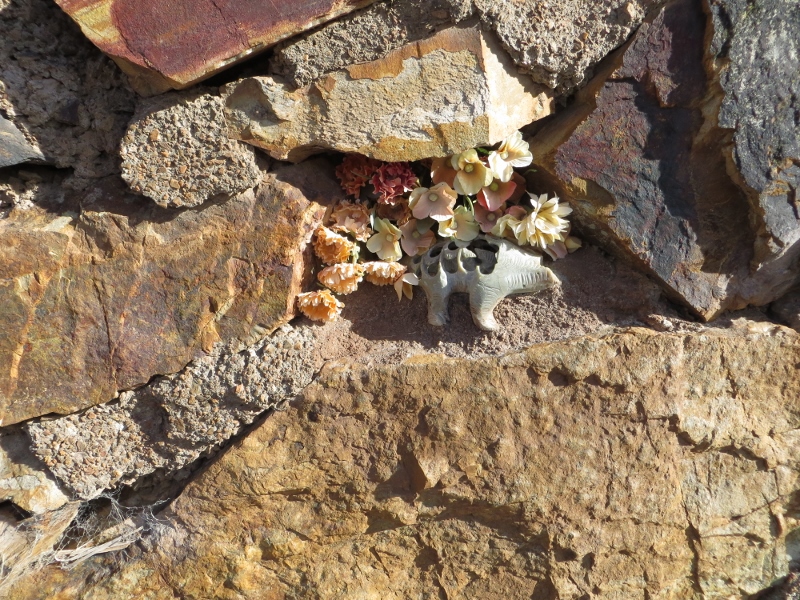 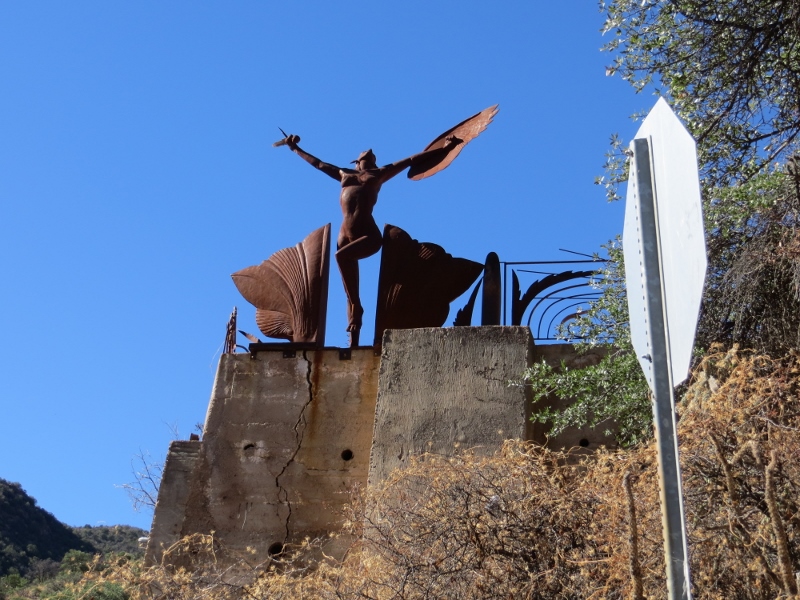 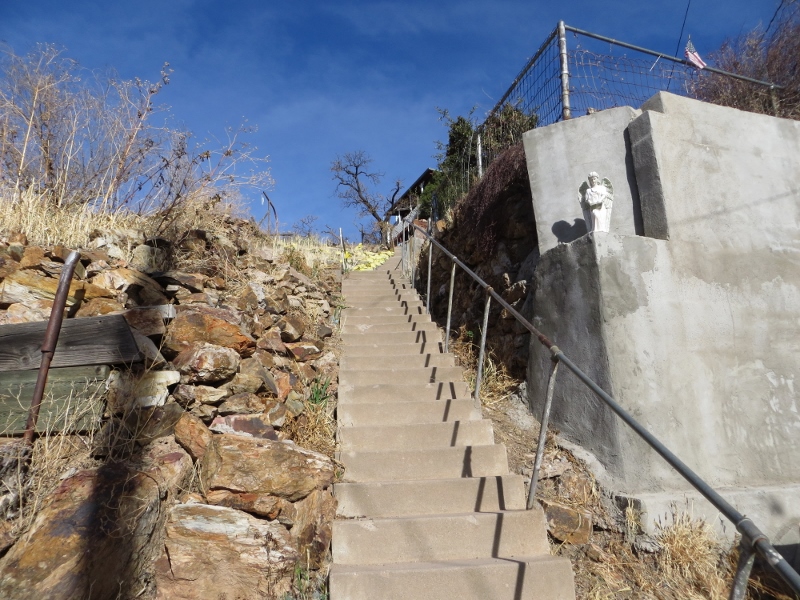 Or watching you as you climb some stairs. 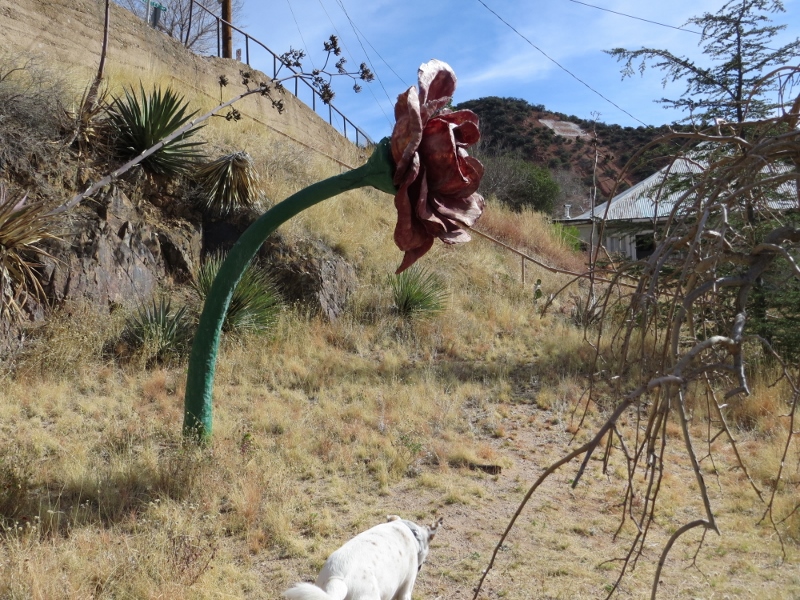 Or something bizarre; Petey is still trying to figure this one out. 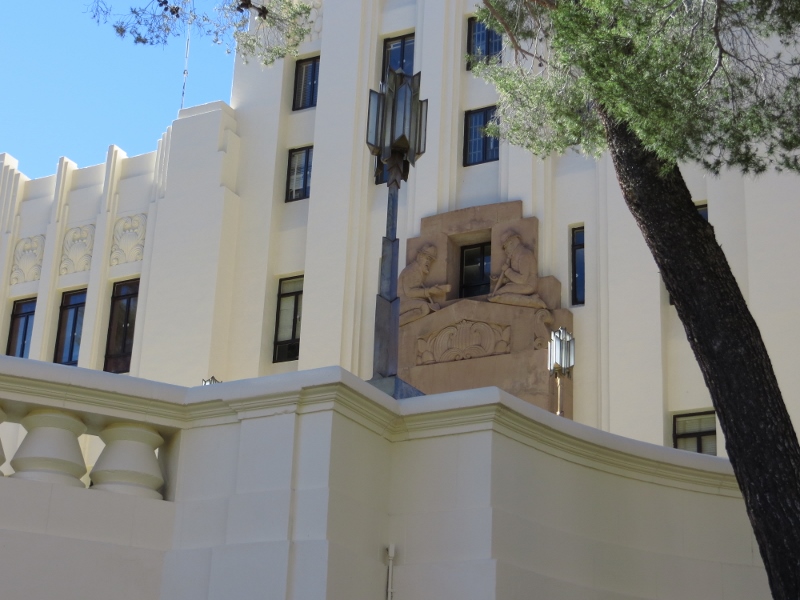 But Bisbee is not just a tourist town; it is also the county seat. Here is its art deco courthouse, still very much in use. 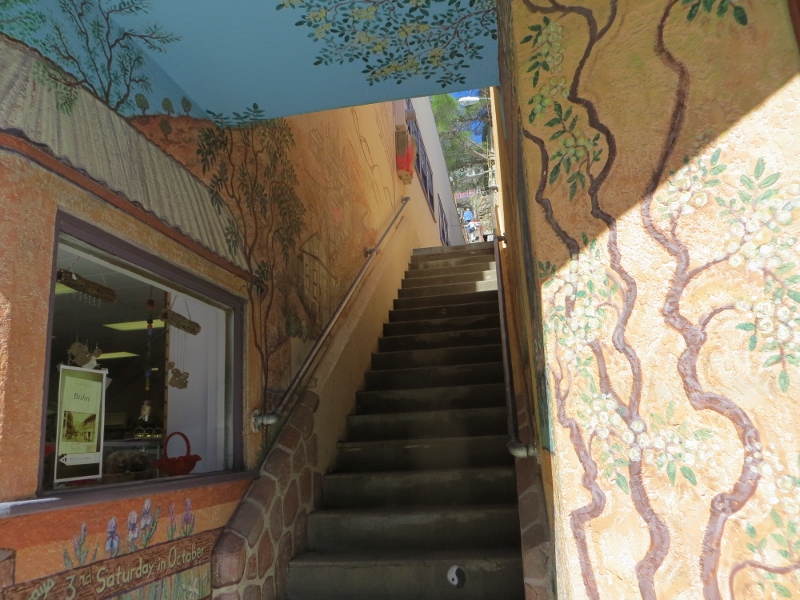 This stairway starts in a storefront on Main Street. 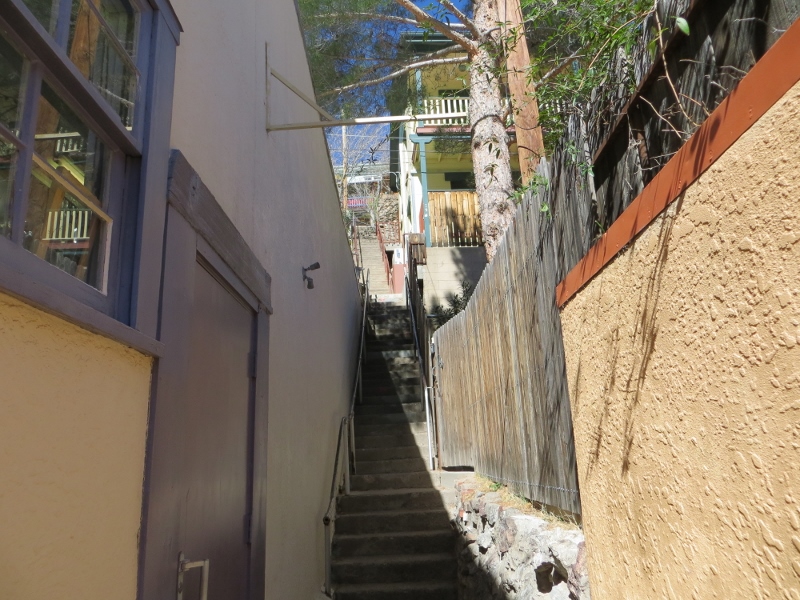 It winds for 181 steps past several houses. 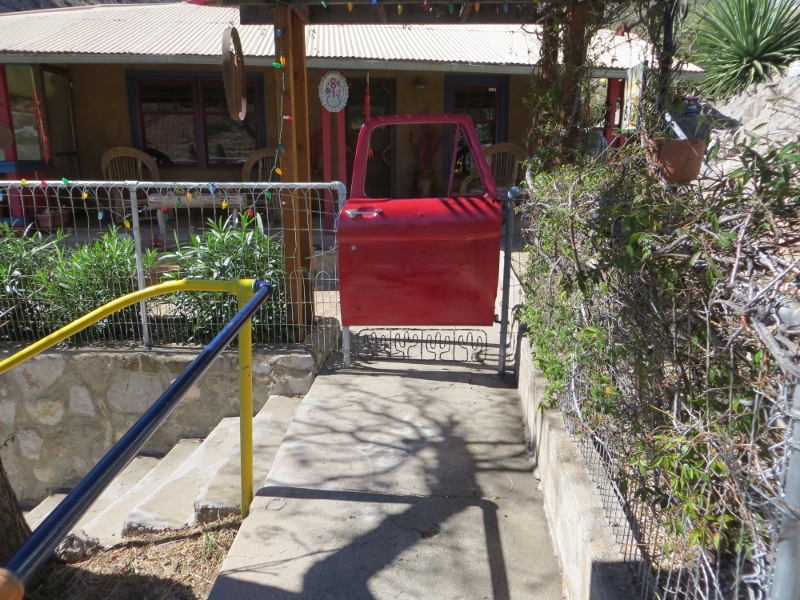 All of them have been turned into their own private Shangri-La. 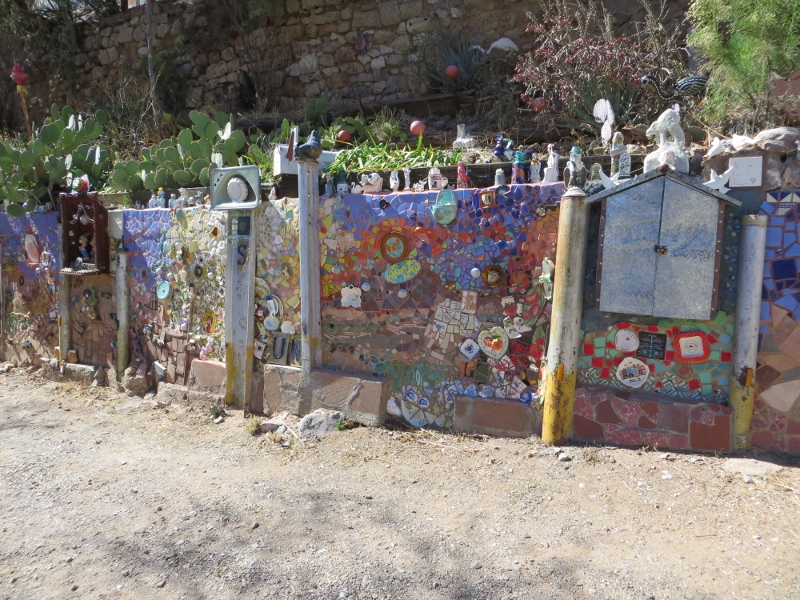 Depending upon how you turn, you might run into this wall. 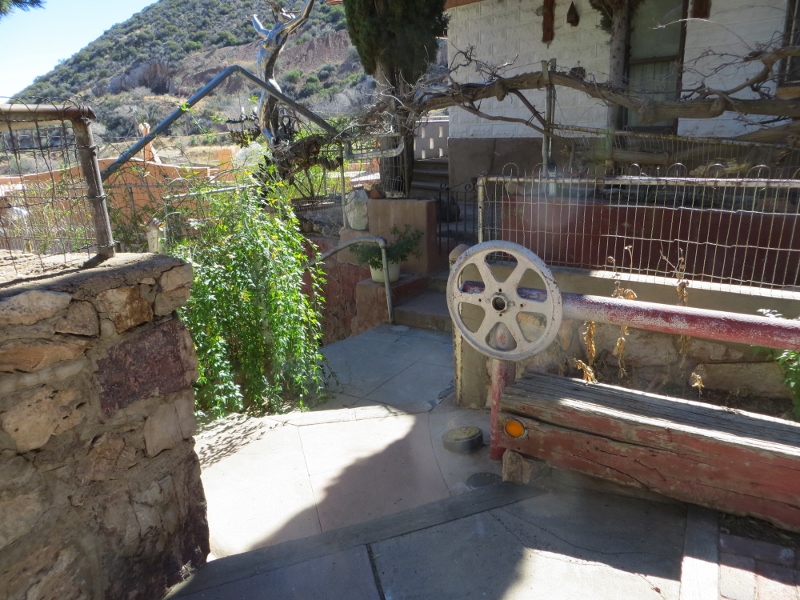 And again depending on how you turn, you might find these stairs to take you back to Main Street.

What I’ve shown you is only the tip of the iceberg. There is so much to explore in Bisbee.