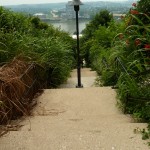 Cincinnati is built on hills, and hills mean two things. The first is a pretty setting. On this front, the city is pretty and Winston Churchill called Cincinnati, “the most beautiful inland city in America.”   The other, and more important thing to the wanderer and stair seeker, is the potential for public stairways. And according to the city’s web site, there are close to 400 hillside stairways.

A year ago, after finishing a bowl of Cincinnati-Style chili, I still had time for a couple of hours of wandering before going to a Cincinnati Reds game at Great American Ballpark in downtown Cincinnati. I chose the Mount Adams neighborhood just east of downtown for some stair wandering.

My adventure started near the end of Celestial Street where I headed down these stairs. 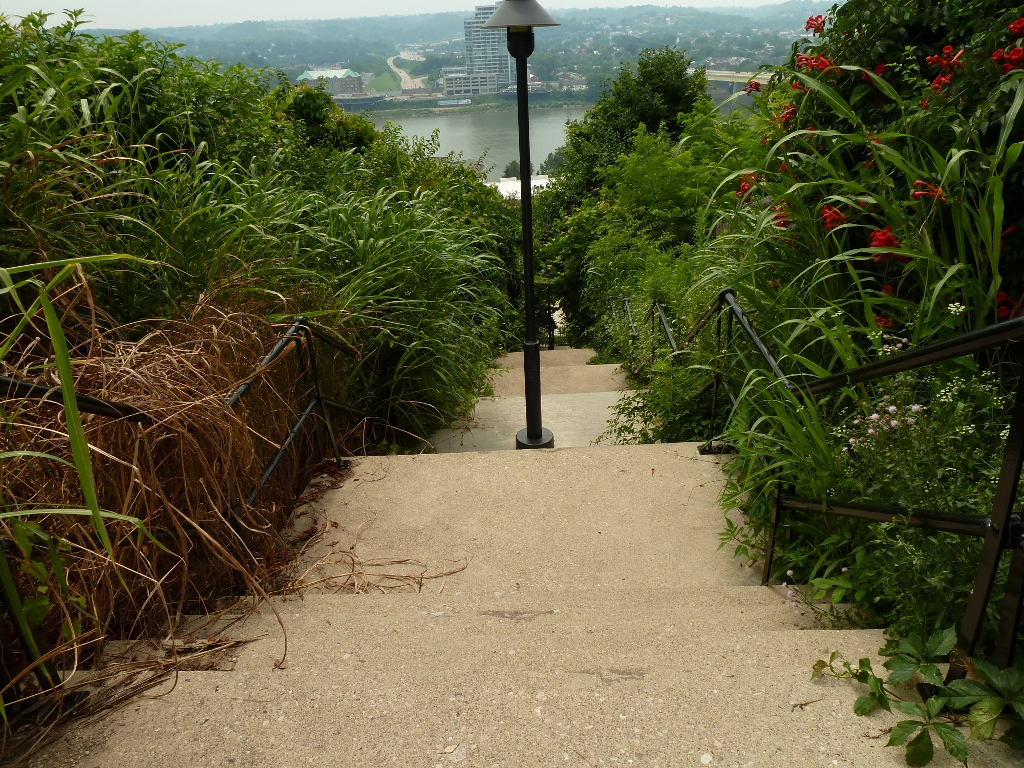 That’s Kentucky on the other side of the Ohio River.

When I reached Columbia Parkway at the bottom of the stairs, I headed west to catch Oregon Street to walk back to Mount Adams. 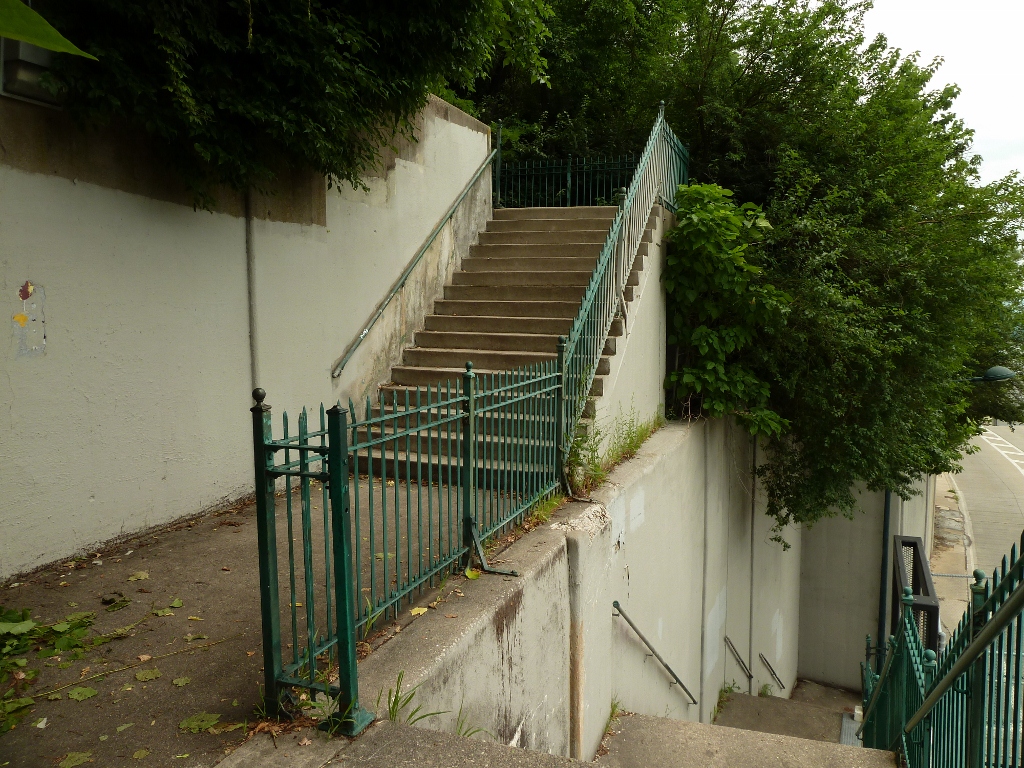 You can still see the piers of the Mount Adams Incline along Oregon Street. 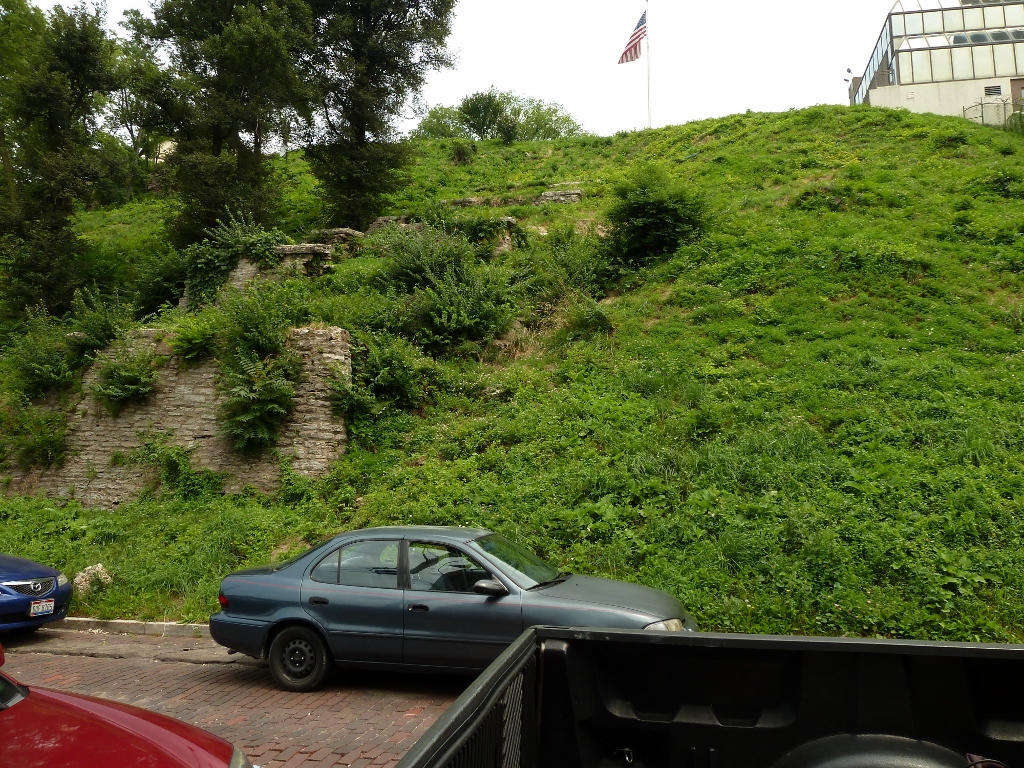 The Mount Adams Incline lifted streetcars from downtown Cincinnati to the top of Mount Adams until 1948. Can you imagine how popular the Incline would be today if it could have survived?

When you get to the end of Oregon Street, you’ll run into these stairs. 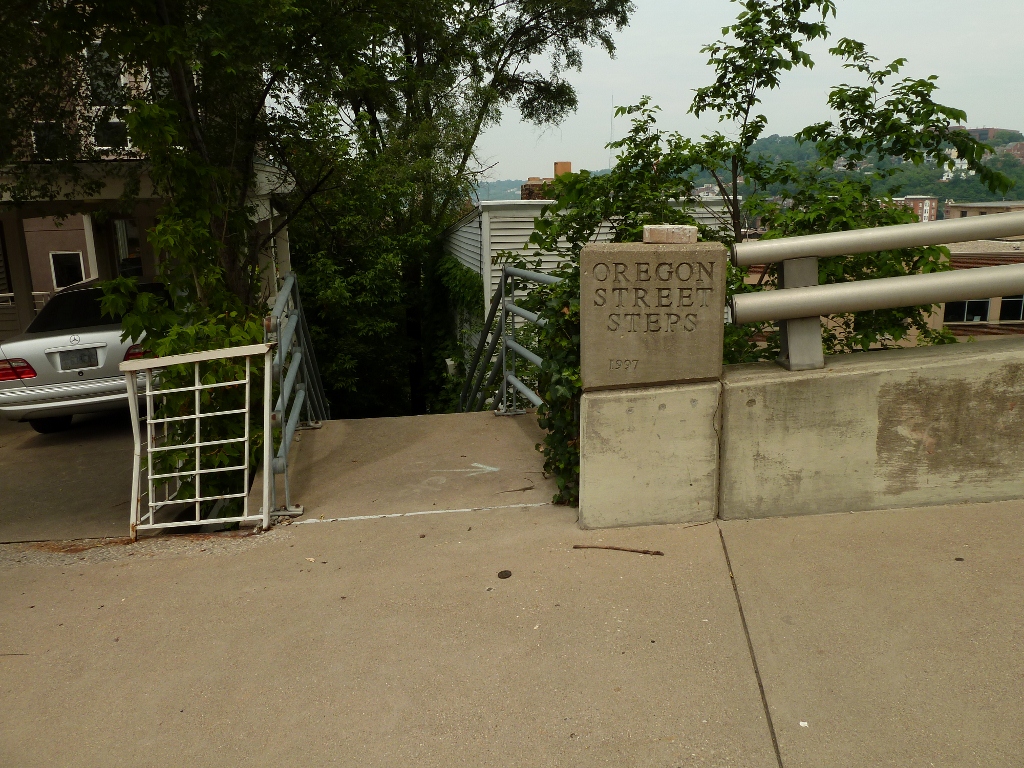 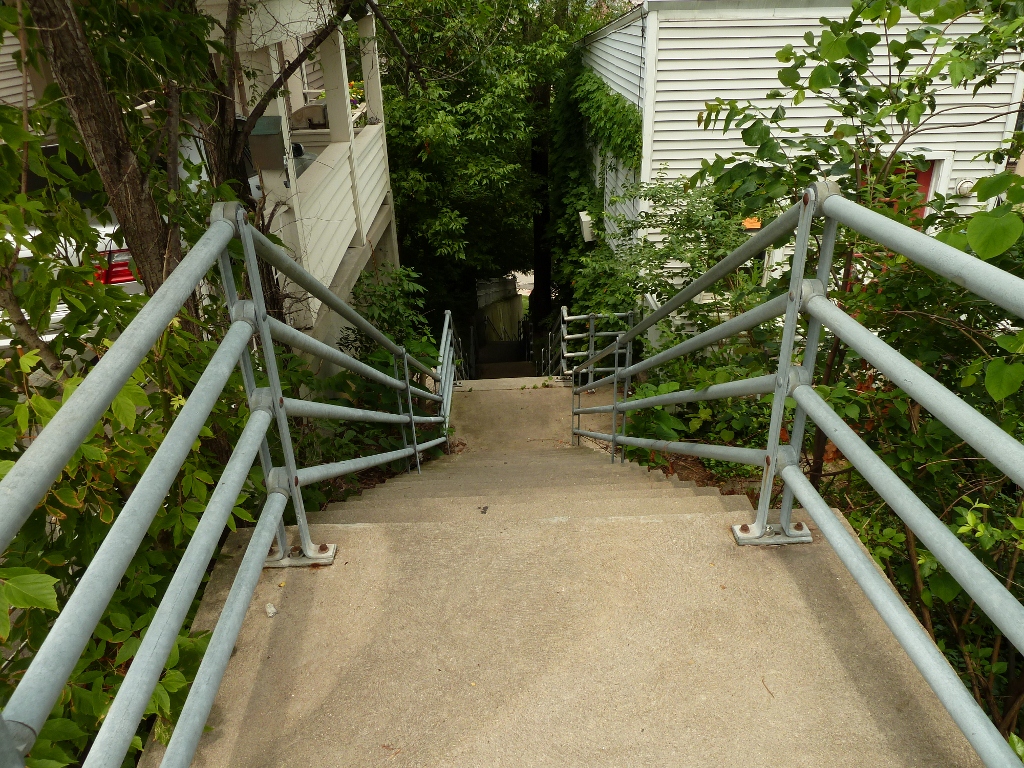 Don’t worry it’s not all downhill. If you turn right at the bottom of the stairs you’ll soon find another stairway to take you back to the top of Mount Adams. 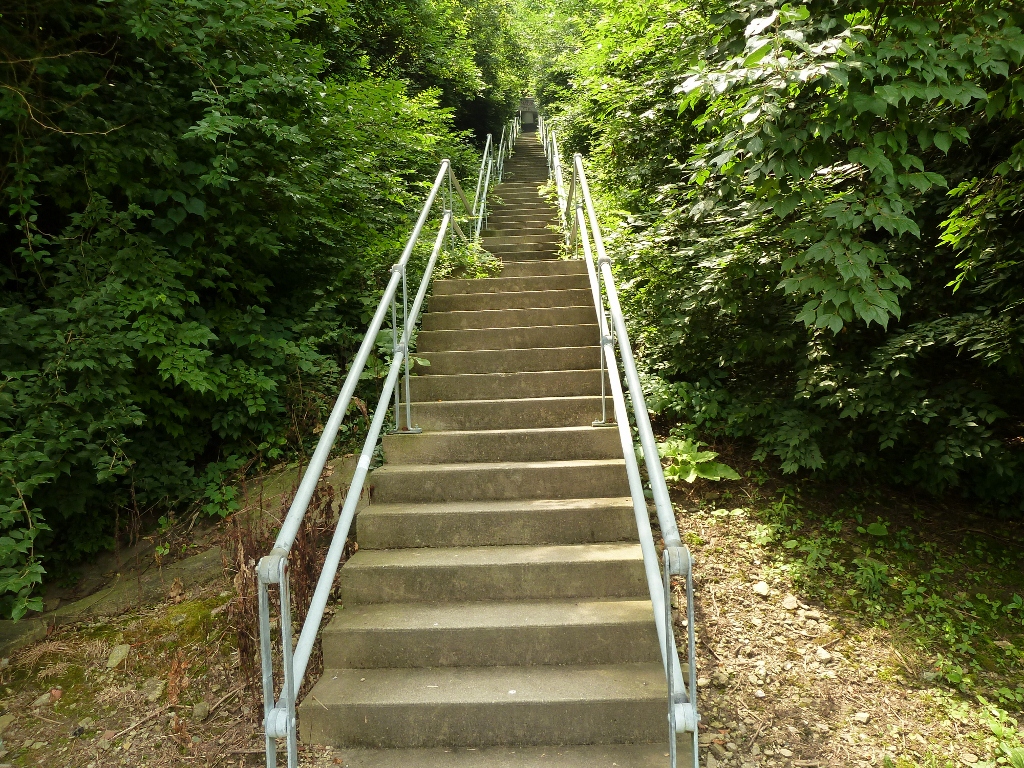 When you get to the top you won’t be far from where the Mount Adams Incline deposited streetcars at the top of Mount Adams. 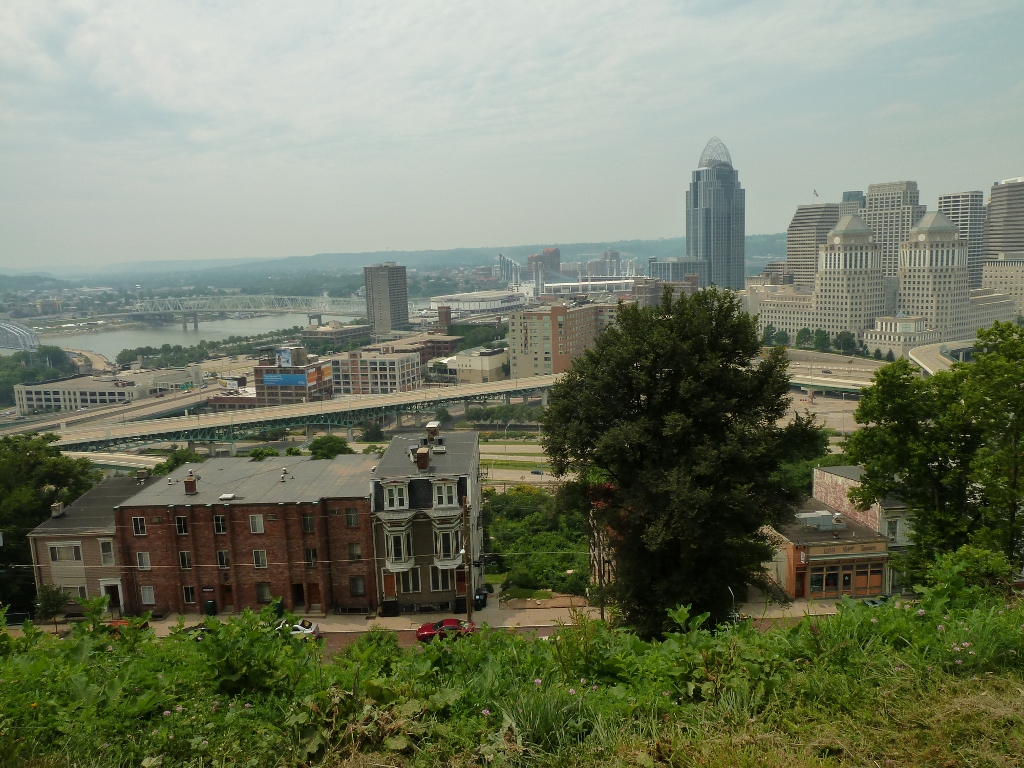 The gap in the houses directly in front of you is where the Incline once ran. You can also see how close you are to downtown. If you planned it right you could take a couple of stairways on your walk to work.

Just down the street is another stairway for you to climb. 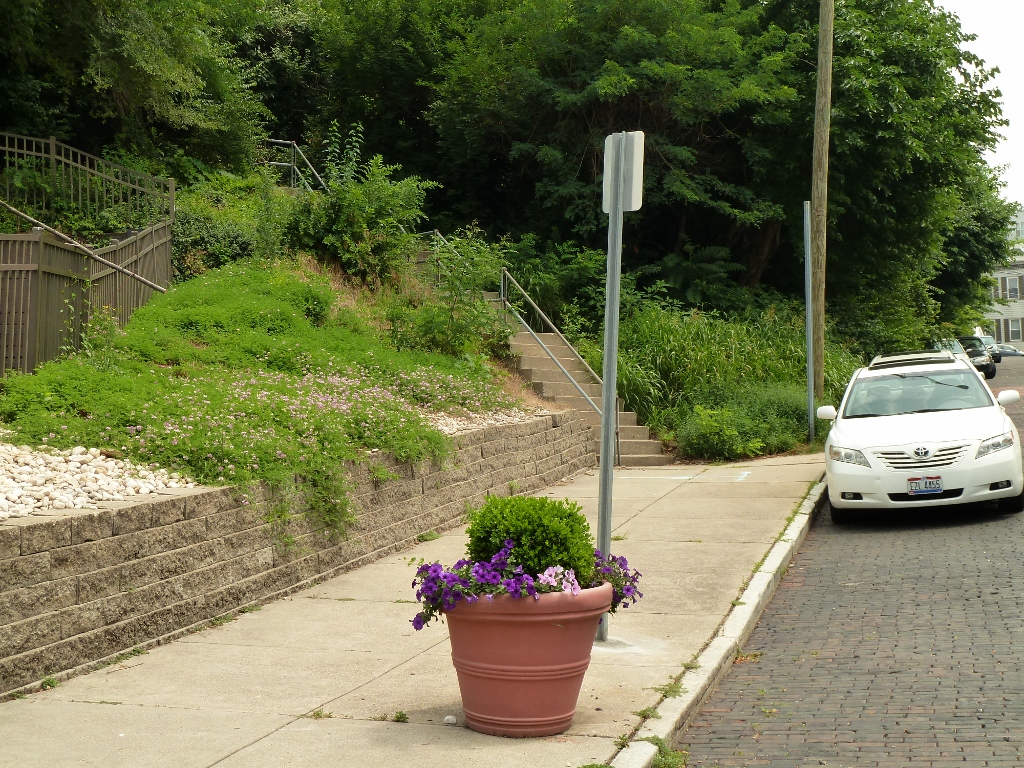 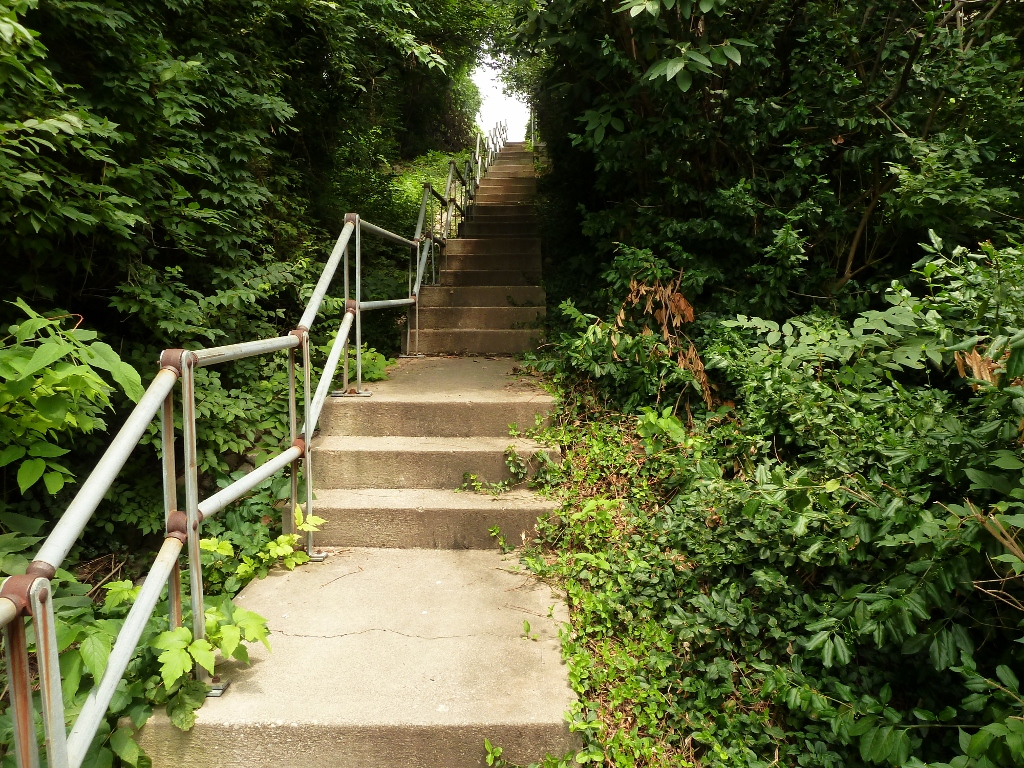 Just around the corner from where the stairs end is an area with nice restaurants and places to hang out. 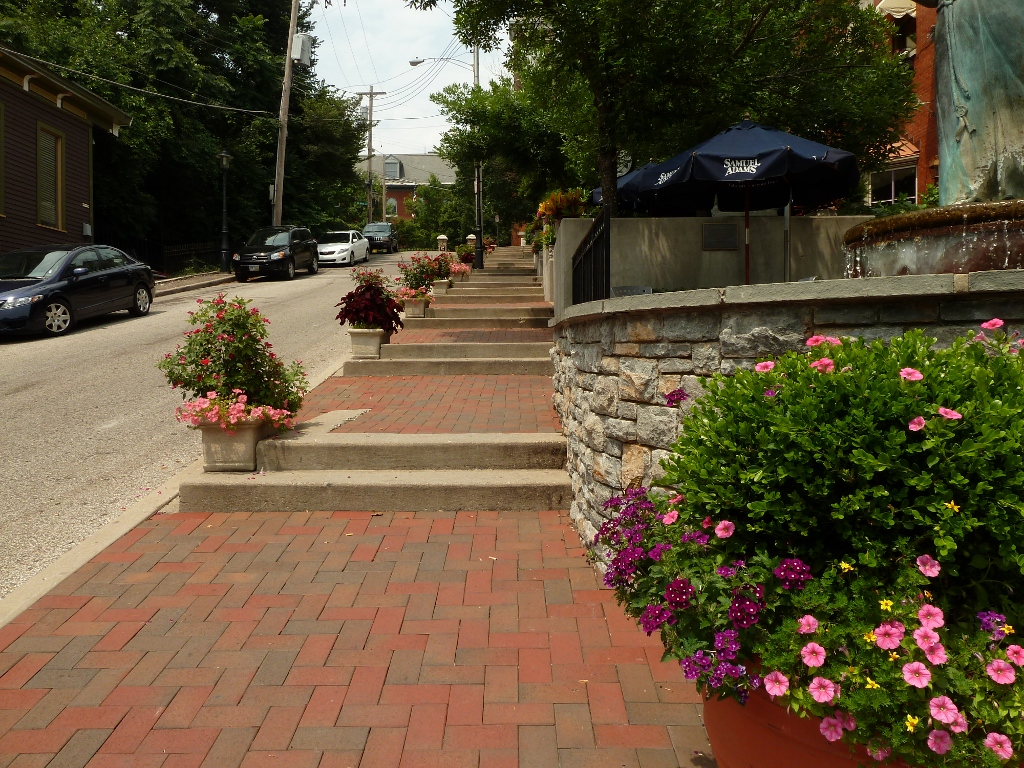 Having just eaten a bowl of chili, I had no need to stop, especially when there are more stairs to find. And just up the way where there should be a street, there is a sidewalk. 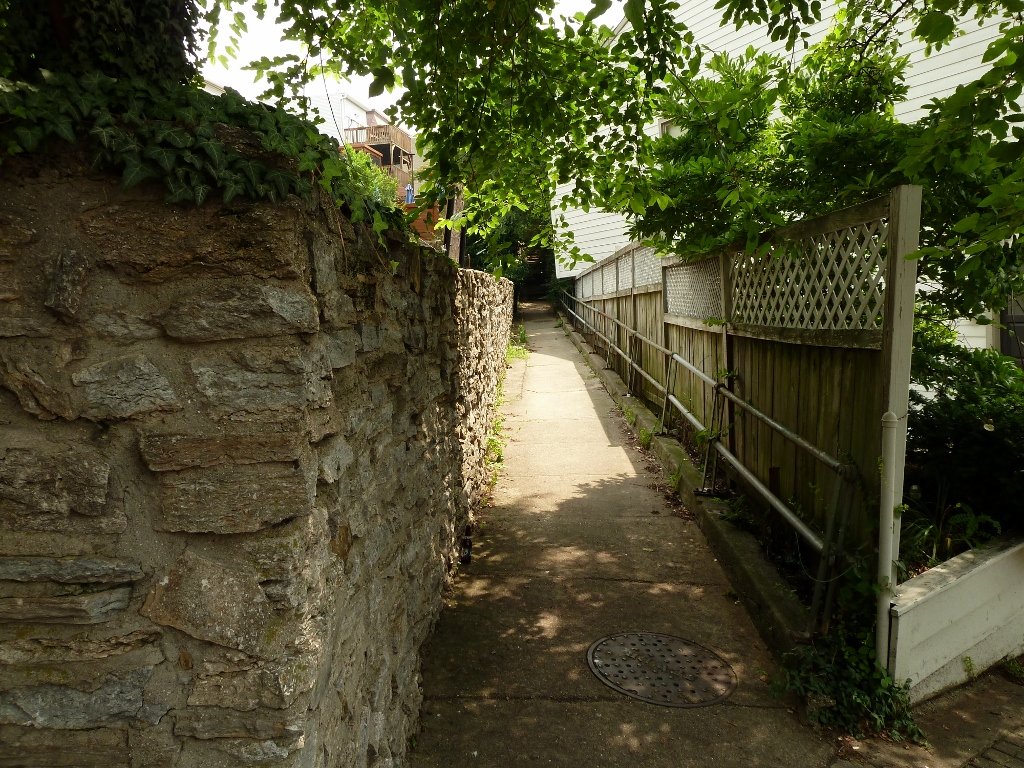 That turns into another staircase. 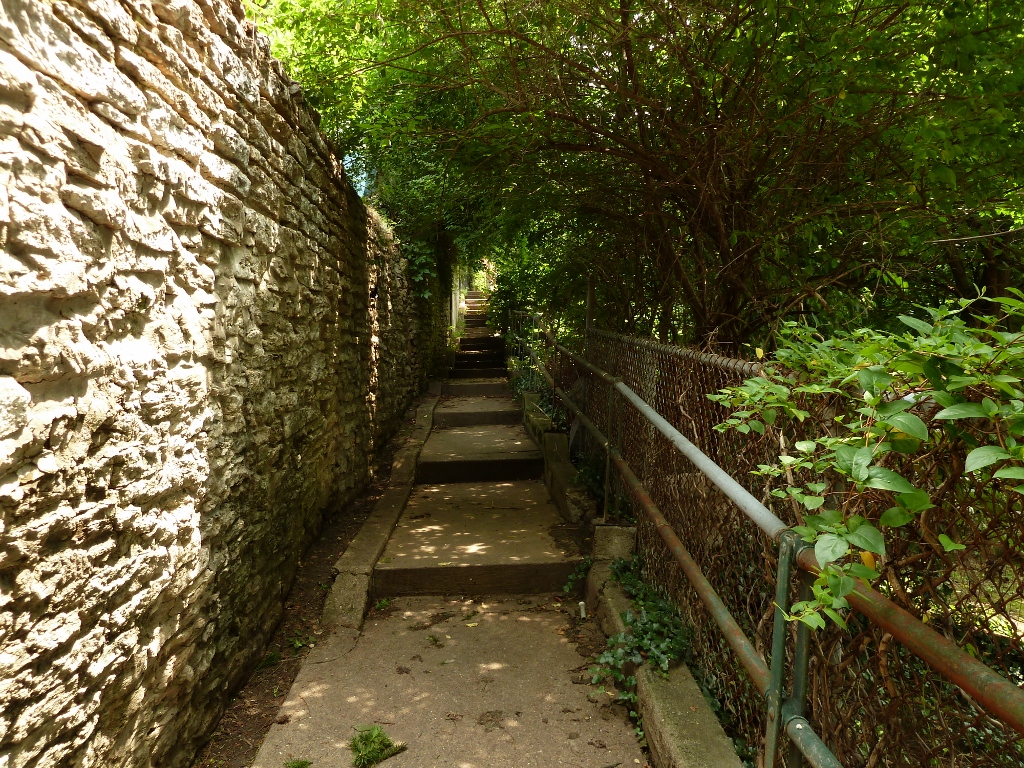 And just across the street from the end of the previous stair street is Holy Cross – Immaculata Church. Thousands of people climb the stairs in front of the church as part of their Good Friday Pilgrimage. (You can check out the posts on Tome Hill and Chimayo in this blog for other Good Friday pilgrimage locations.) If you go inside the church, you can find more information on the Good Friday tradition. 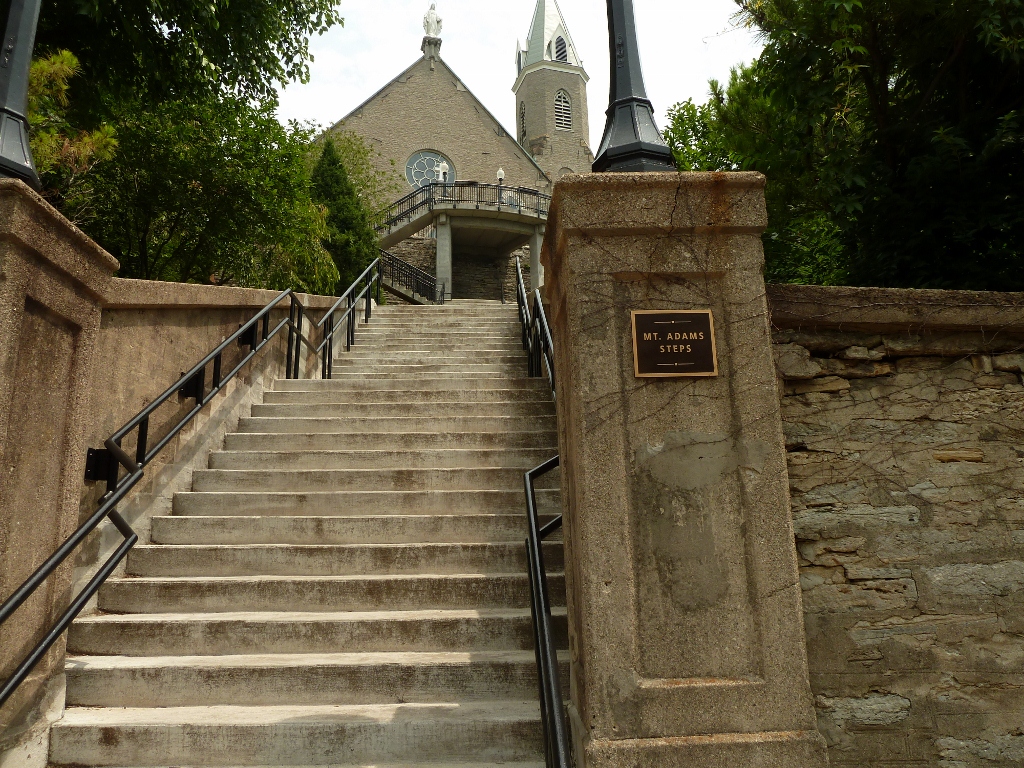 On the day I climbed these stairs, I met a woman who climbs these stairs the first Saturday of every month and prays the rosary at every step. From the top of the steps, directly in front of the church, you have a great view of downtown. 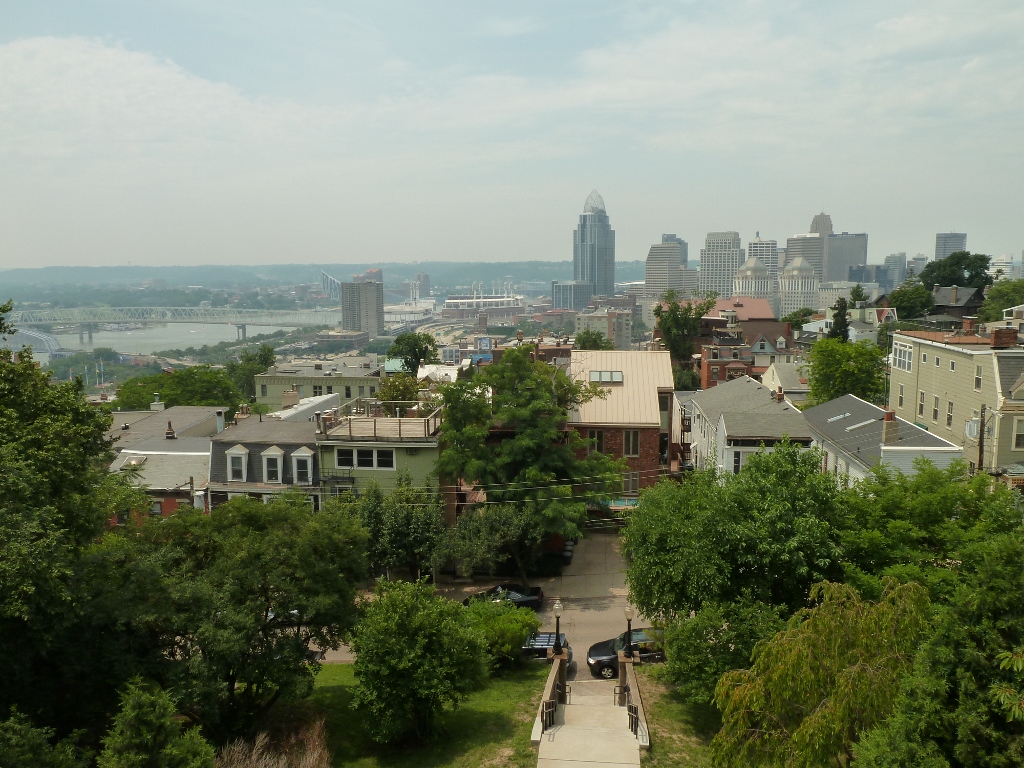 But don’t stop now, there are still more stairs to find. 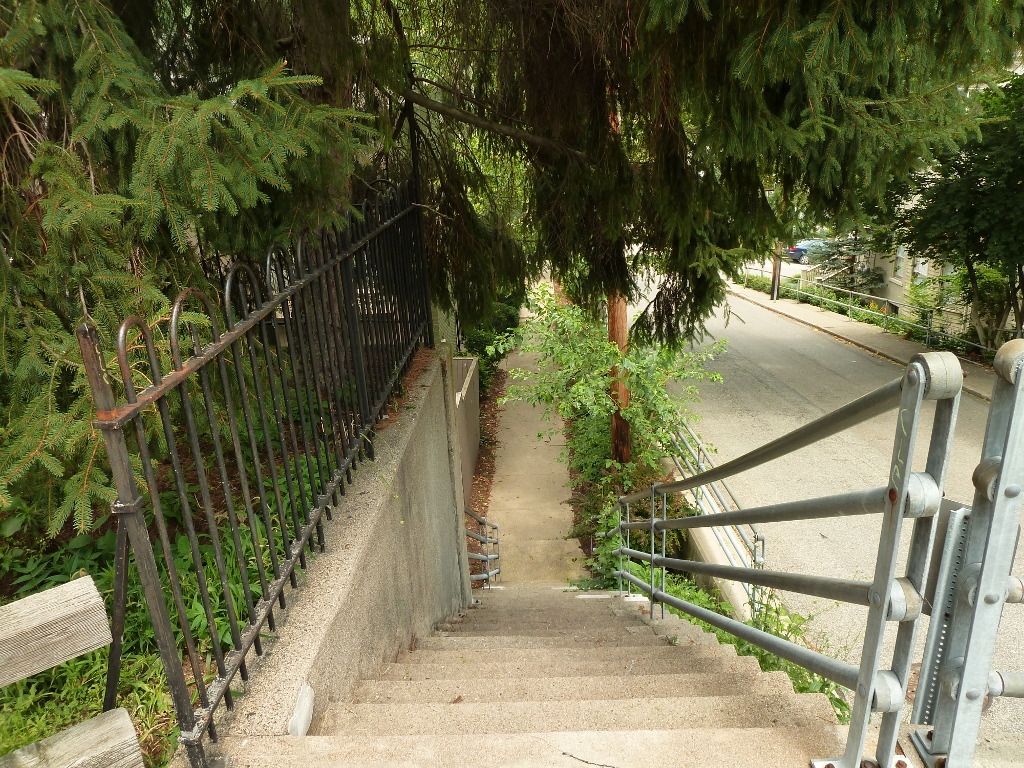 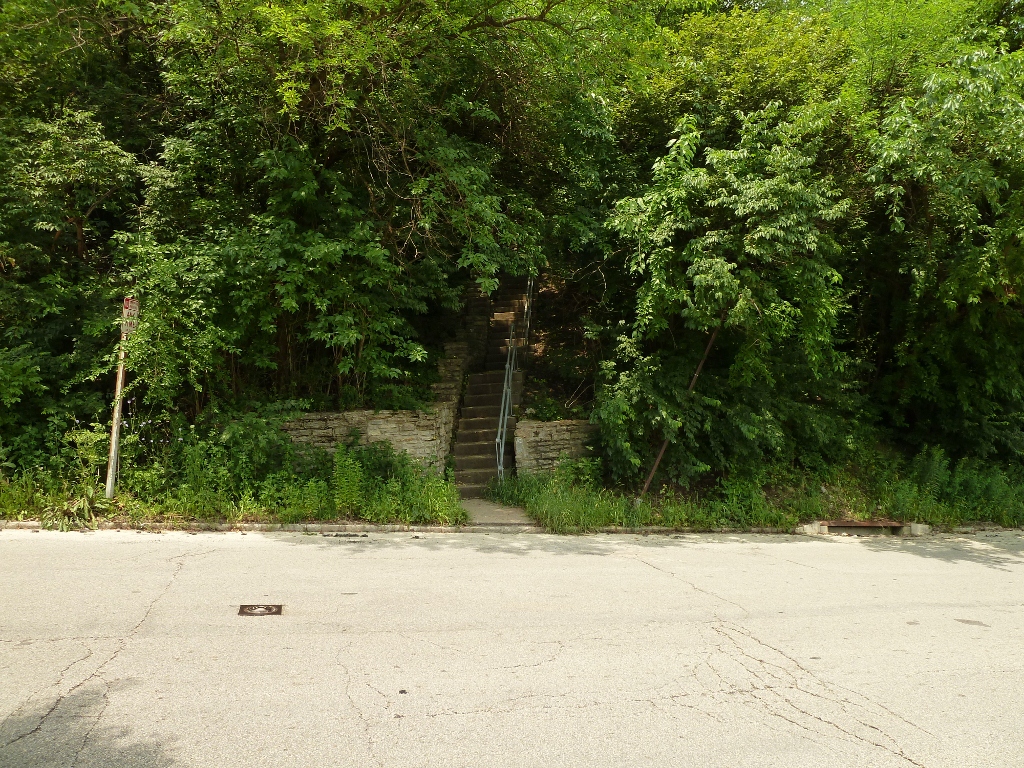 These steps are right next to a bus stop and head on up through a forest. 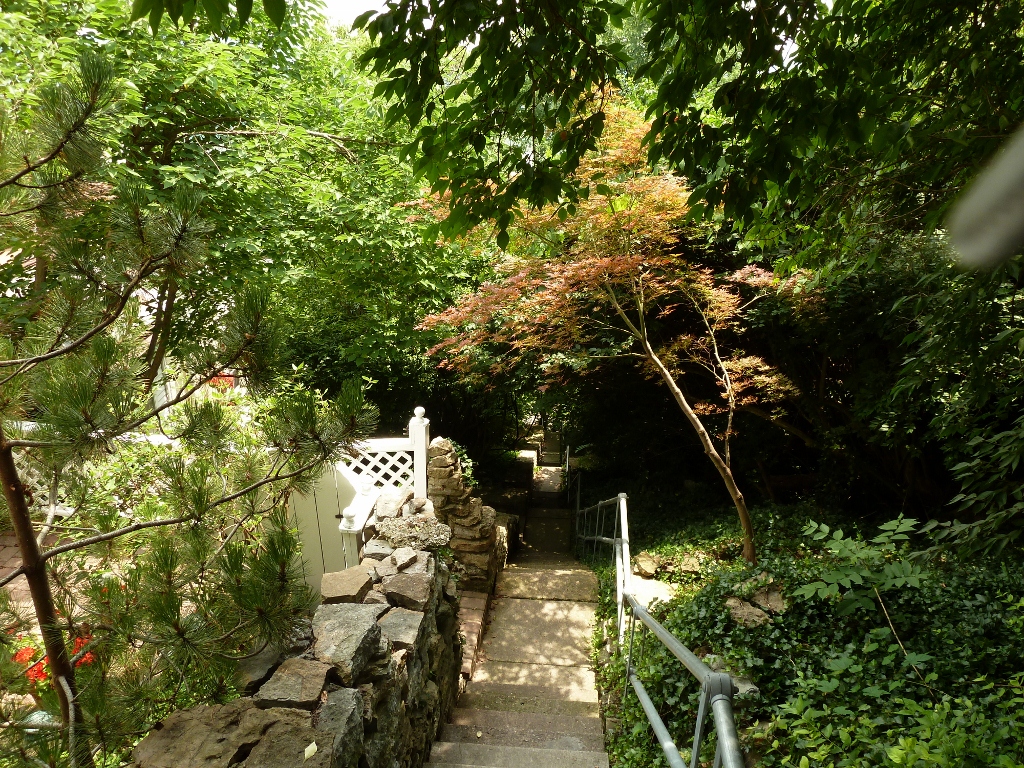 As you look back down on the stairway, you can see that there are houses right on the stairs. 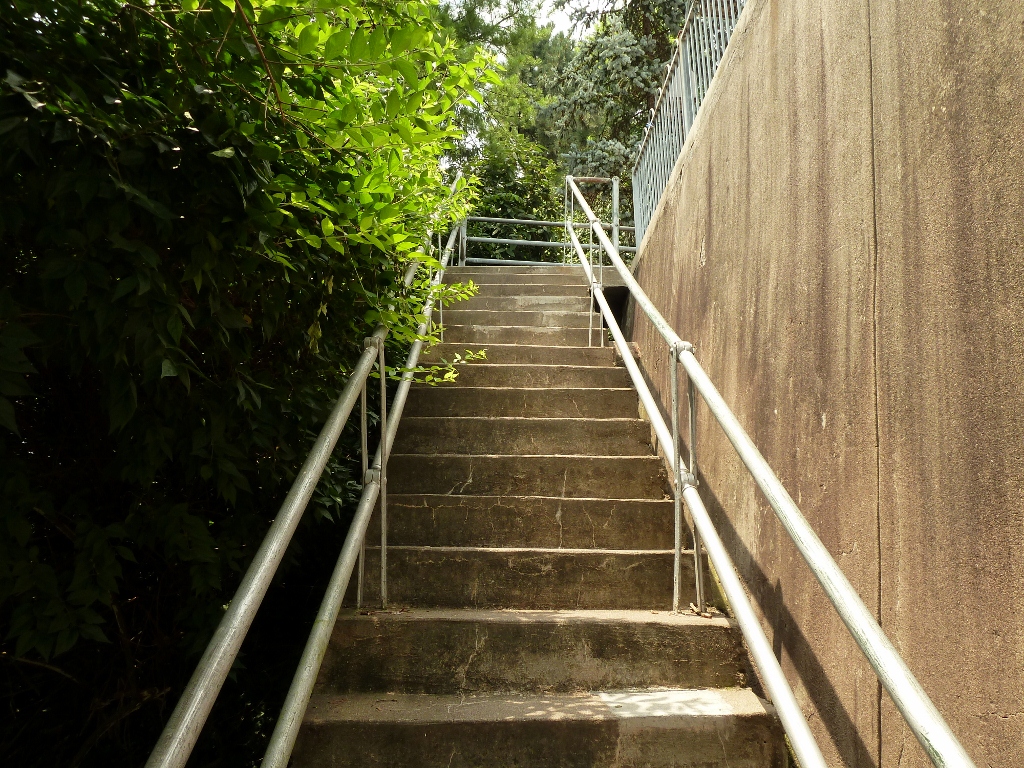 The top of the stairway was the site of a battery to protect Cincinnati from a possible Confederate invasion during the Civil War. 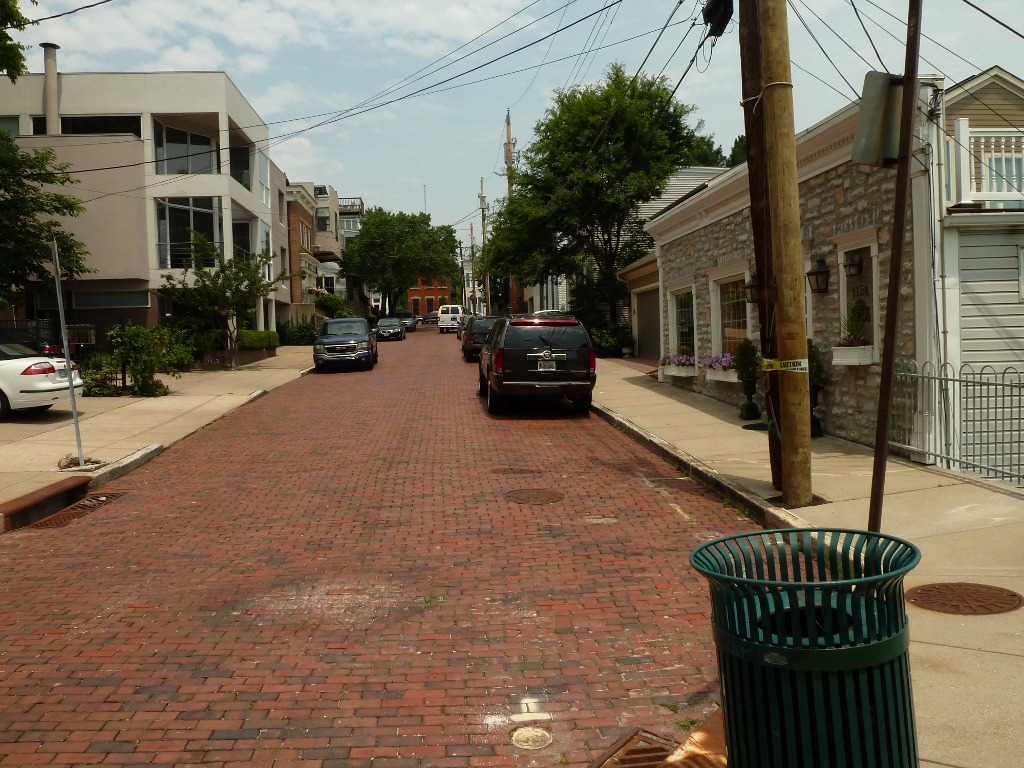 The stairs take you from the bus stop down below to this quiet residential street on top.

Although it would be easy to spend days wandering through neighborhoods and climbing stairs, it was time to stop wandering and head to the ballpark to watch the Reds play the Indians. 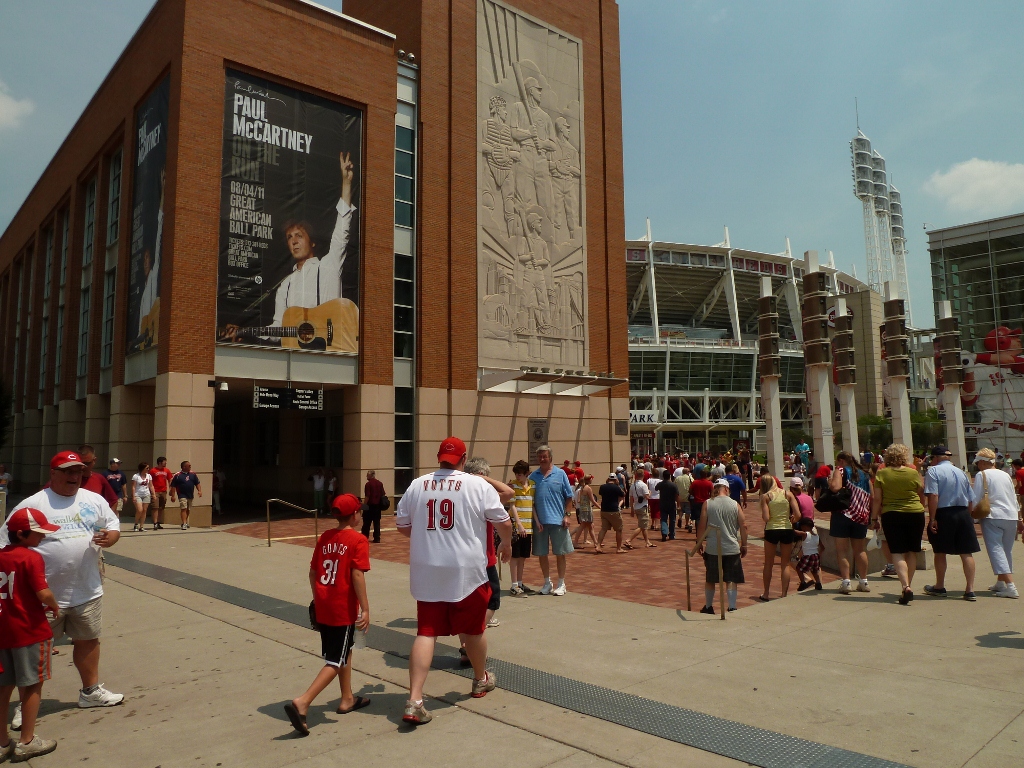