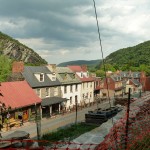 Harpers Ferry is the easternmost town in West Virginia and is where the Shenandoah River joins the Potomac River. 180 years ago, Harpers Ferry was an important industrial center and the location of a Federal arsenal. It is famous for being the site of John Brown’s raid two years before the Civil War. The arsenal and the town’s location on the Shenandoah River made it an important Civil War crossroads and it changed hands several times during the war. After several devastating floods, industry left and the town is now only a shell of what it once was.

Much of Harpers Ferry is now a National Historic Park.  With many of the old building buildings restored and still standing, it is a perfect place for wandering. As a bonus, whenever a town is built in a tight river valley, there is a chance to find stairs. 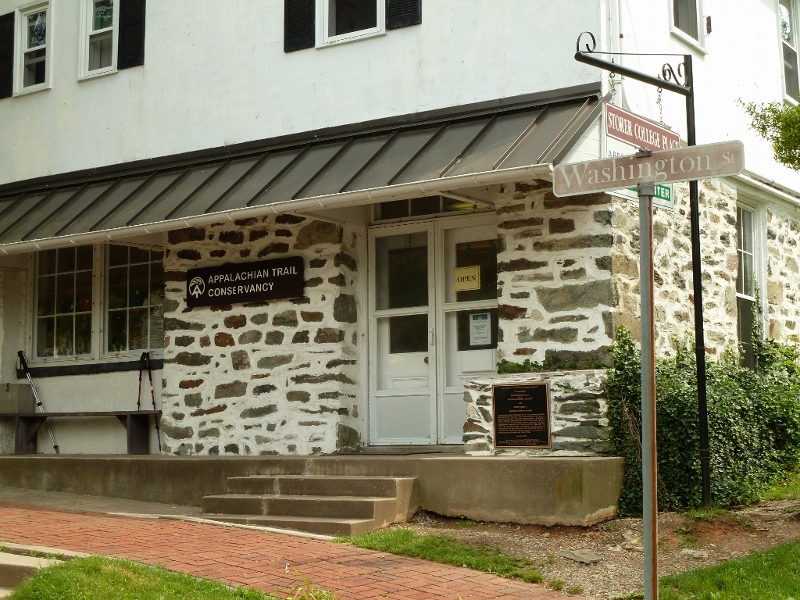 My first surprise was spotting an old enclosed spring right on Washington Street. I went over to get some water but discovered that the pump on top is no longer operational. 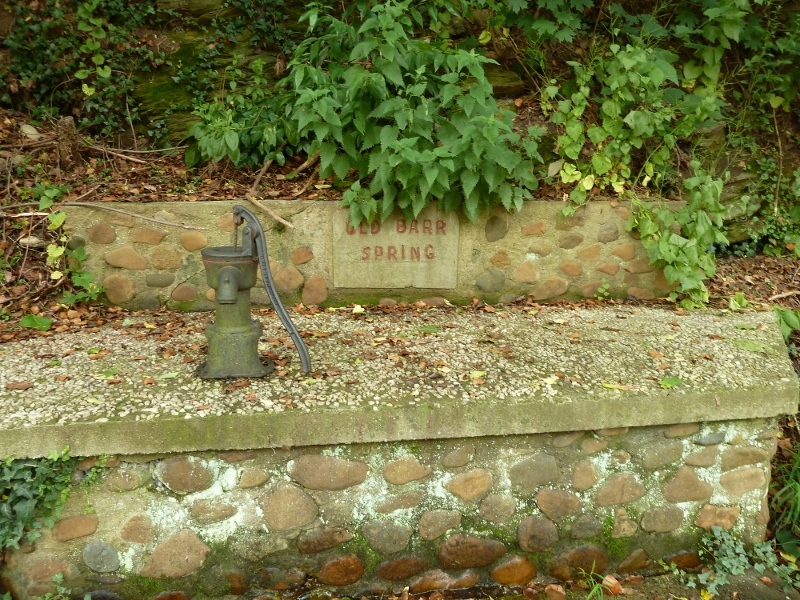 When I reached the edge of the historic district, I came upon my first staircase (65 steps). I am not sure if this is a historic staircase or a more recent staircase built to facilitate tourists wandering around town. 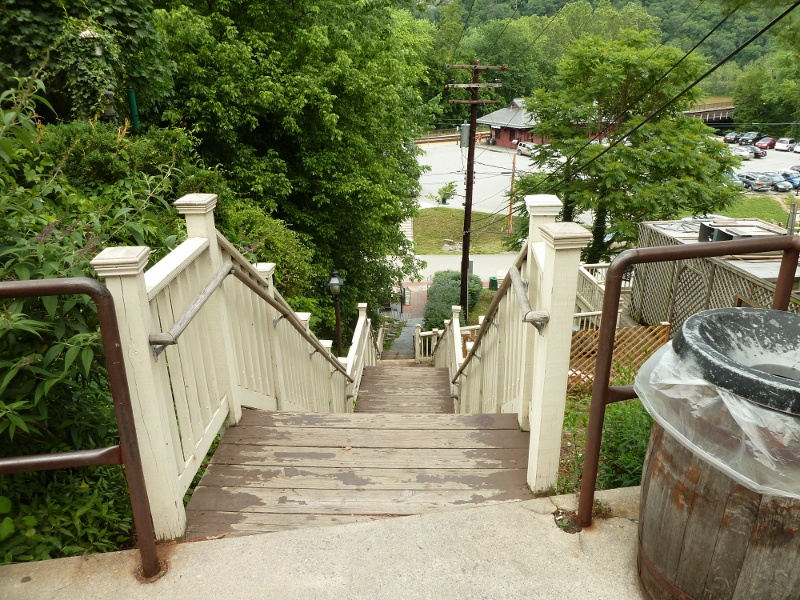 Not too far from that first staircase is another wooden staircase. This one had 50 steps and several shops along the stairs. 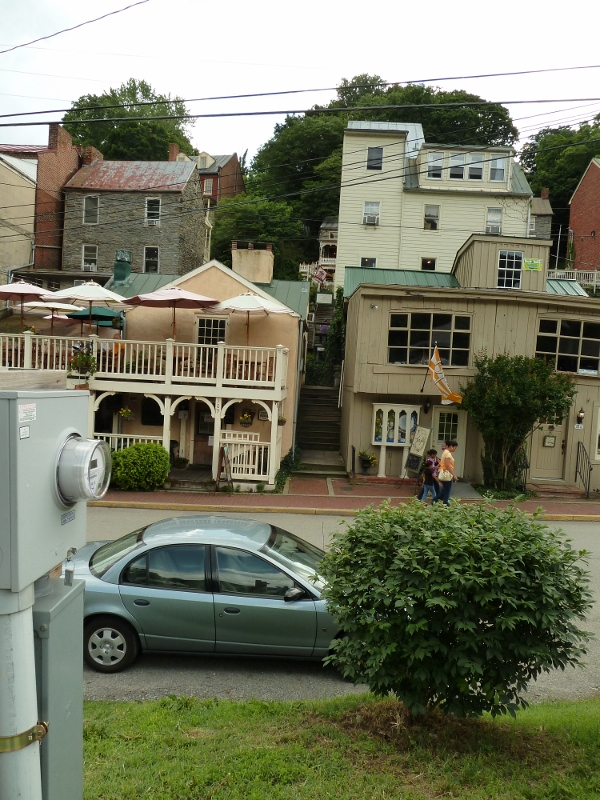 Within a few minutes, I reached the junction of the Potomac and Shenandoah rivers. The old Federal Arsenal and John Brown’s Fort were in this area. The bridge that used to run over the still standing piers (in front of you) was destroyed during the Civil War. The railroad bridge to the left has a wooden walkway to connect the Appalachian Trail to Maryland. 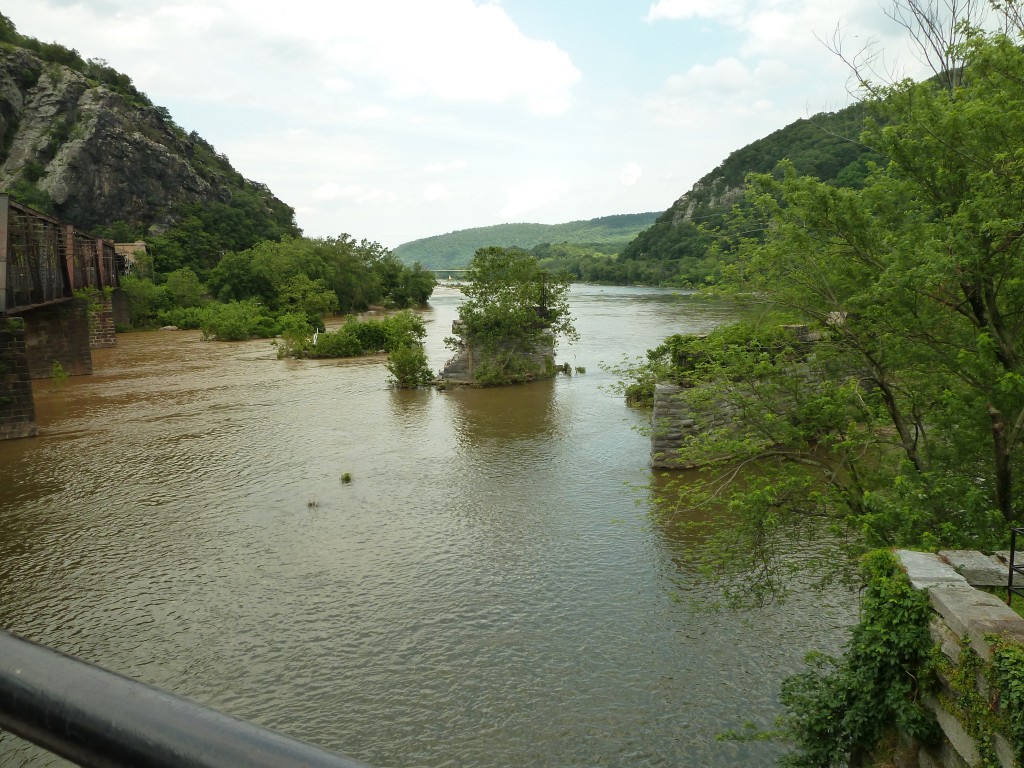 If you cross the bridge over to Maryland, you’ll find the C&O Canal running along the north side of the Potomac River. The C&O Canal was built in the 19th-Century and was destroyed by floods in the first half of the 20th-Century. It is now a National Park. The Appalachian Trail follows the canal’s tow path for a few miles before turning north. You can ride your bike on the canal’s tow path all the way to Washington, D.C., about sixty miles away. You are looking at what was once a lock and lock house. 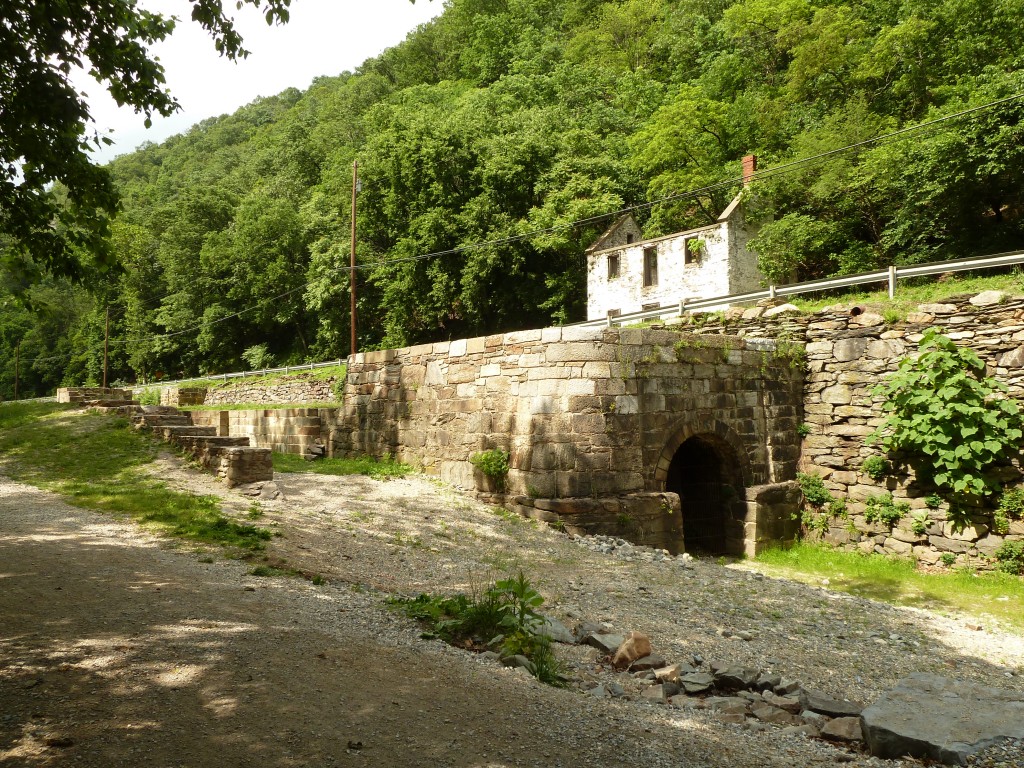 When you turn around and start heading back to the center of town, you’ll see another staircase heading uphill to an old church. 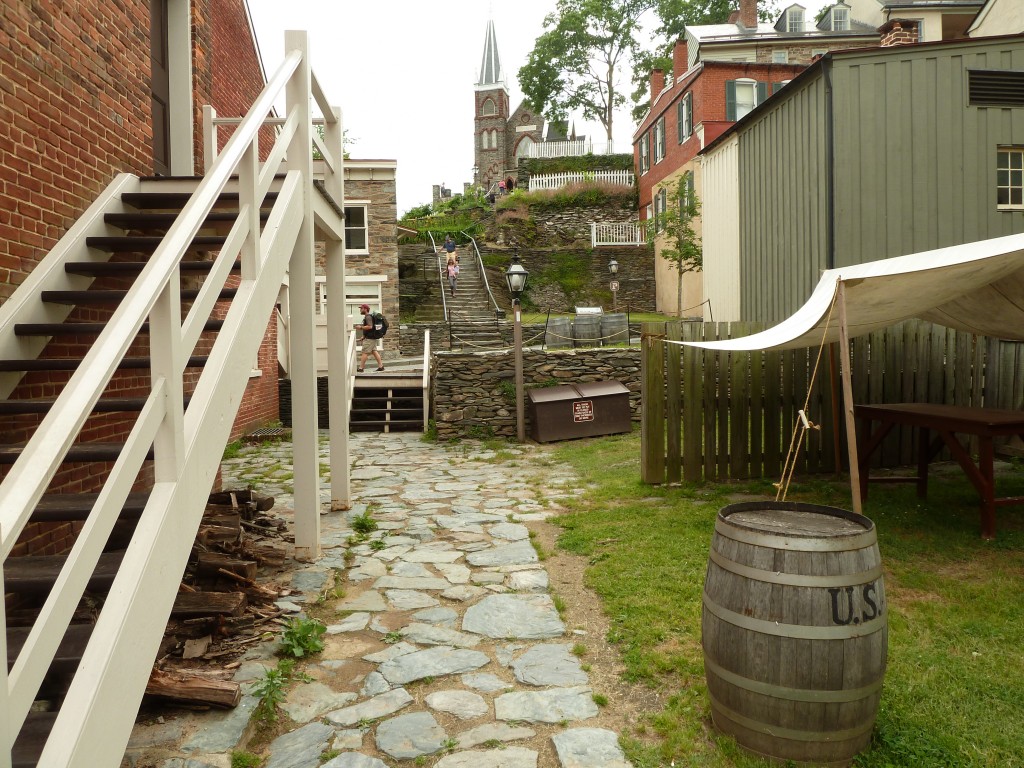 As you climb the staircase you’ll notice that some of the steps have been carved into the shale. 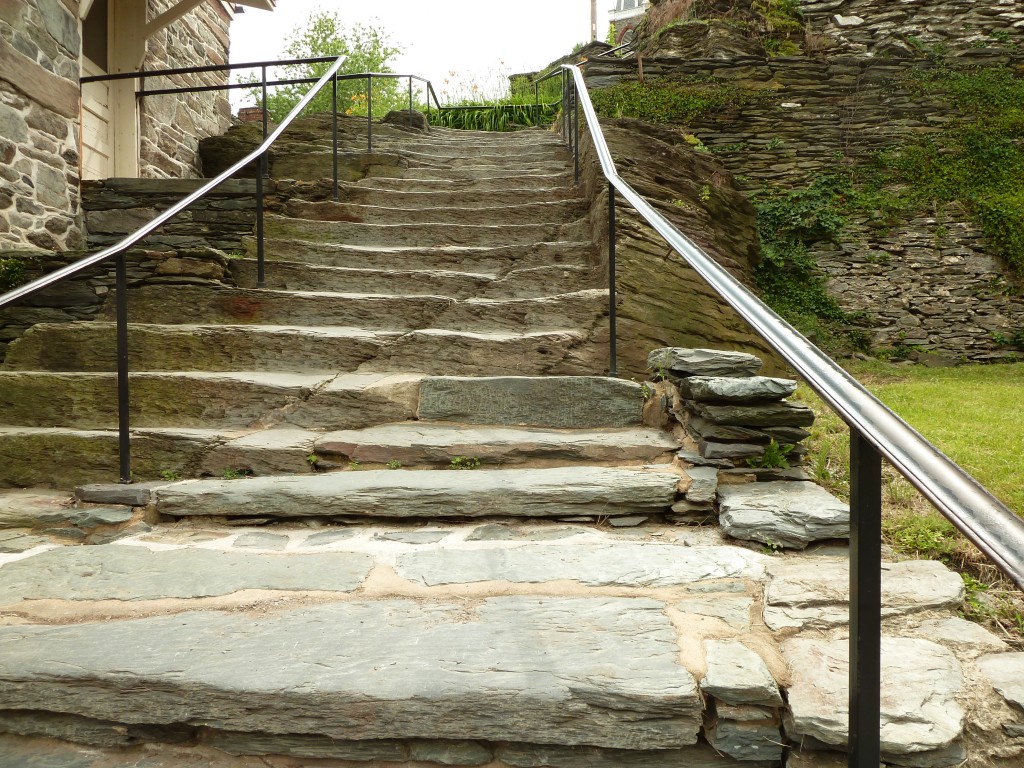 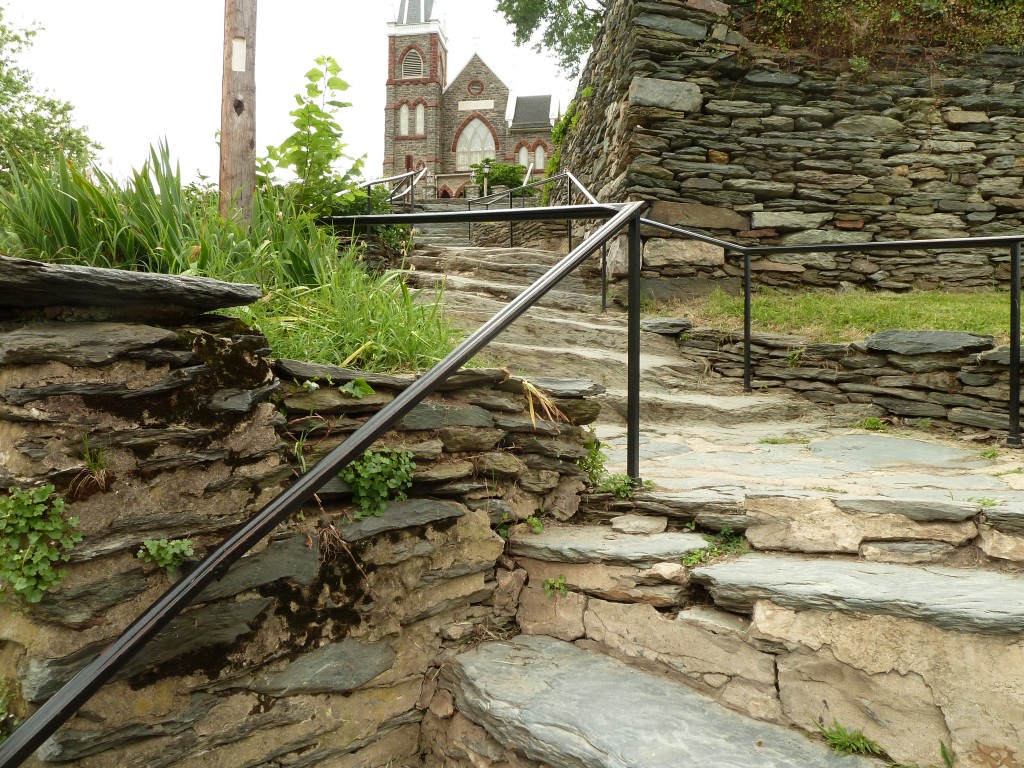 When you reach the church, you will see another set of stairs behind the church. These stairs eventually lead to Jefferson Rock. 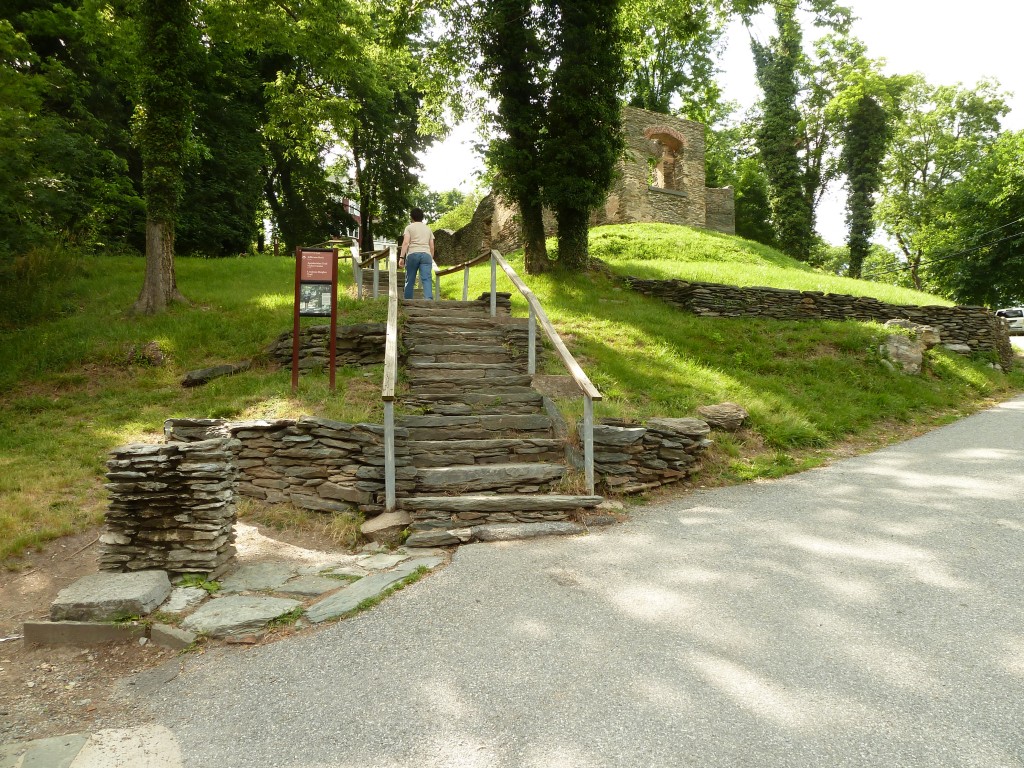 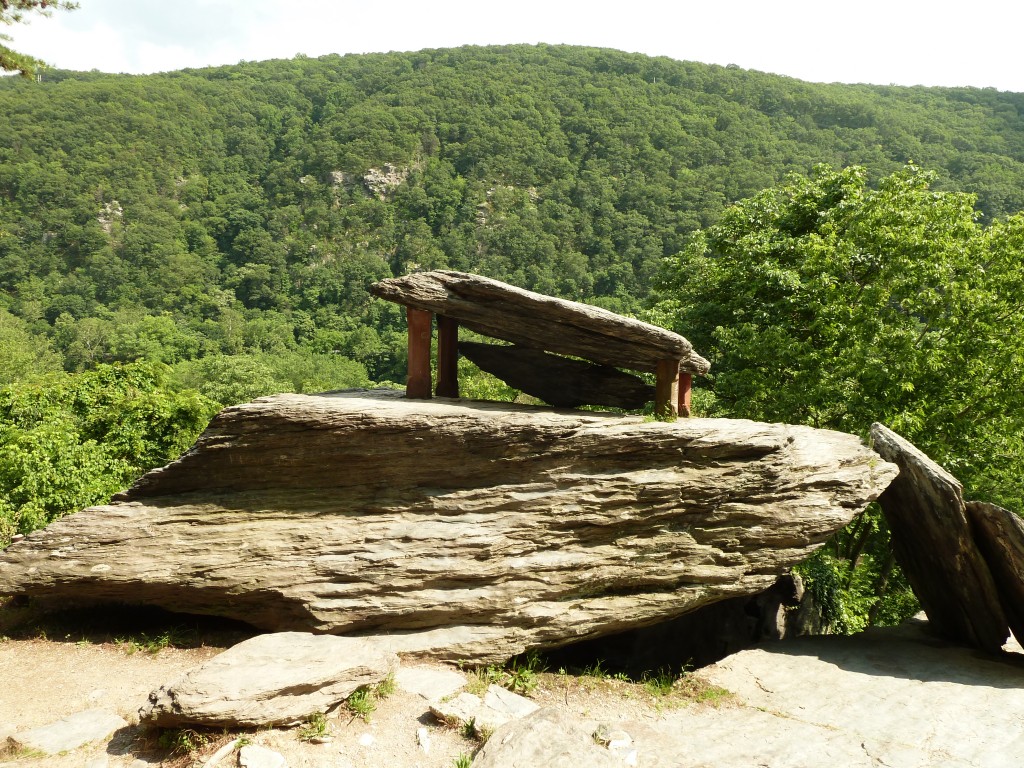 Jefferson Rock is where Thomas Jefferson said the view was “worth a voyage across the Atlantic.” 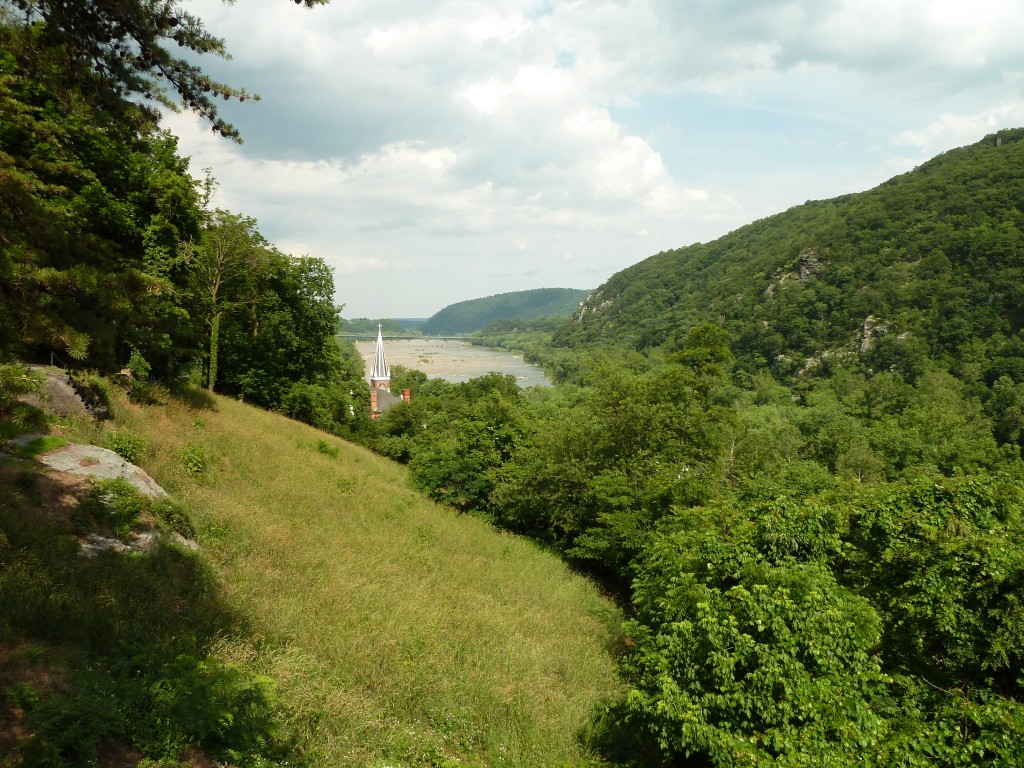 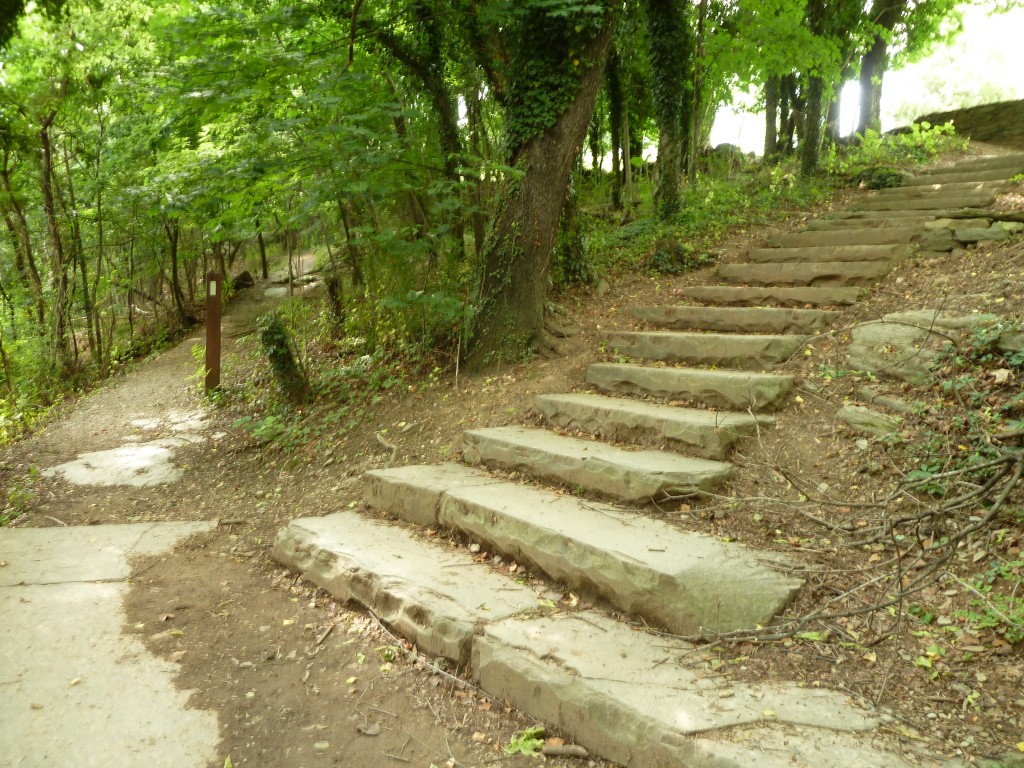 If you combine the steps starting below the church and going all the way to the cemetery, you will have climbed well over 100 steps. If you go back down the stairs and take a left, you’ll soon run into another staircase. 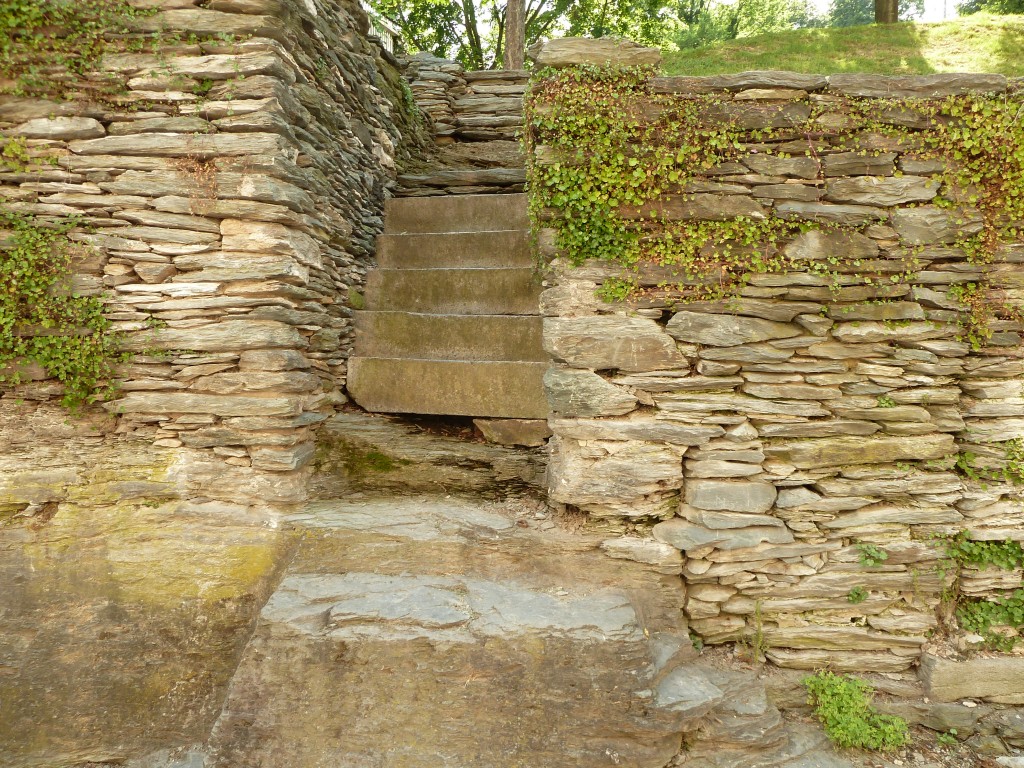 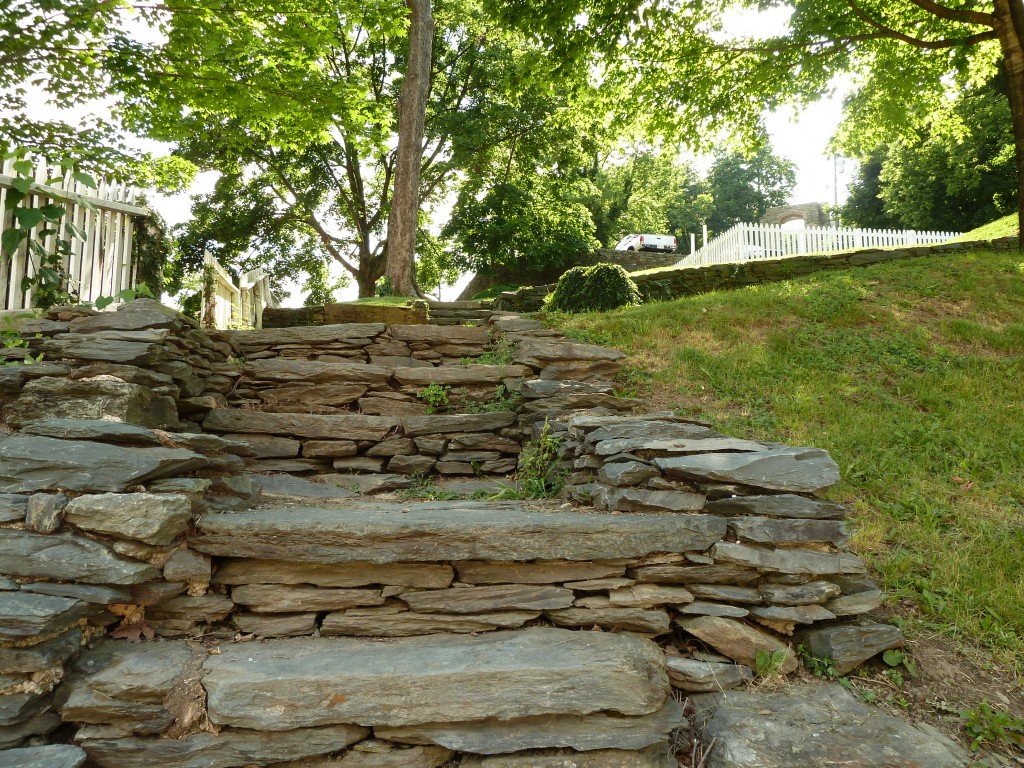 These stairs lead to the green lawn in front of the old church that we passed on the last stairs. If you take a right on the narrow lane at the end of the lawn, you will soon reach these rarely used stairs. 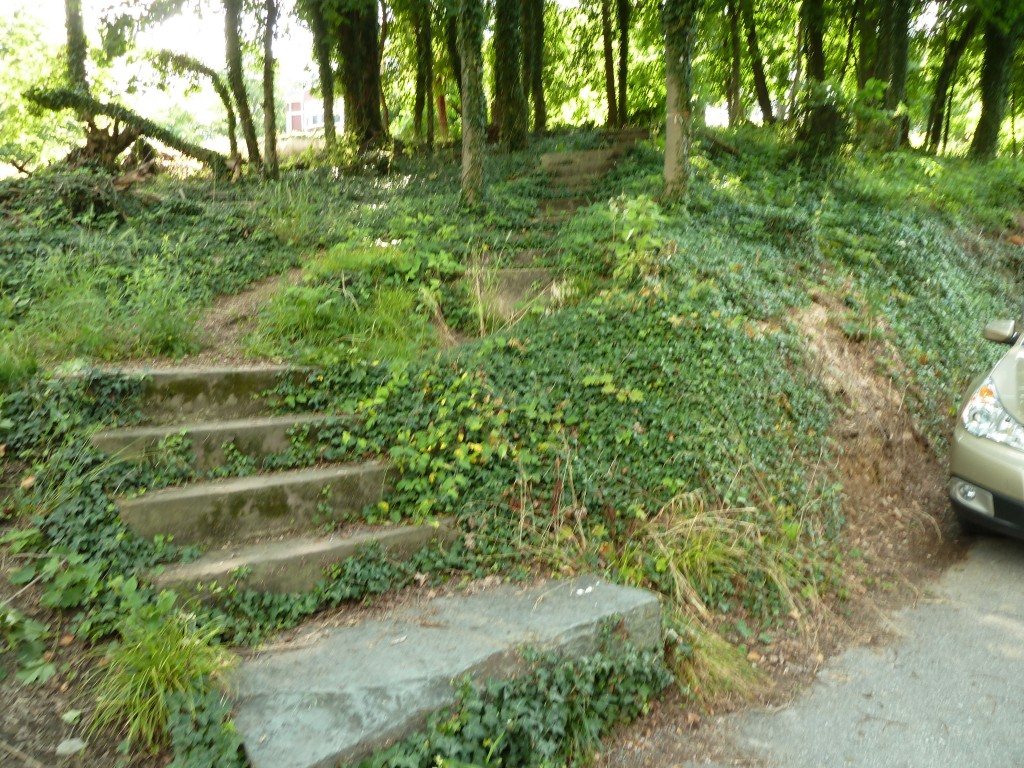 These stairs and associated path eventually reached this old gate. 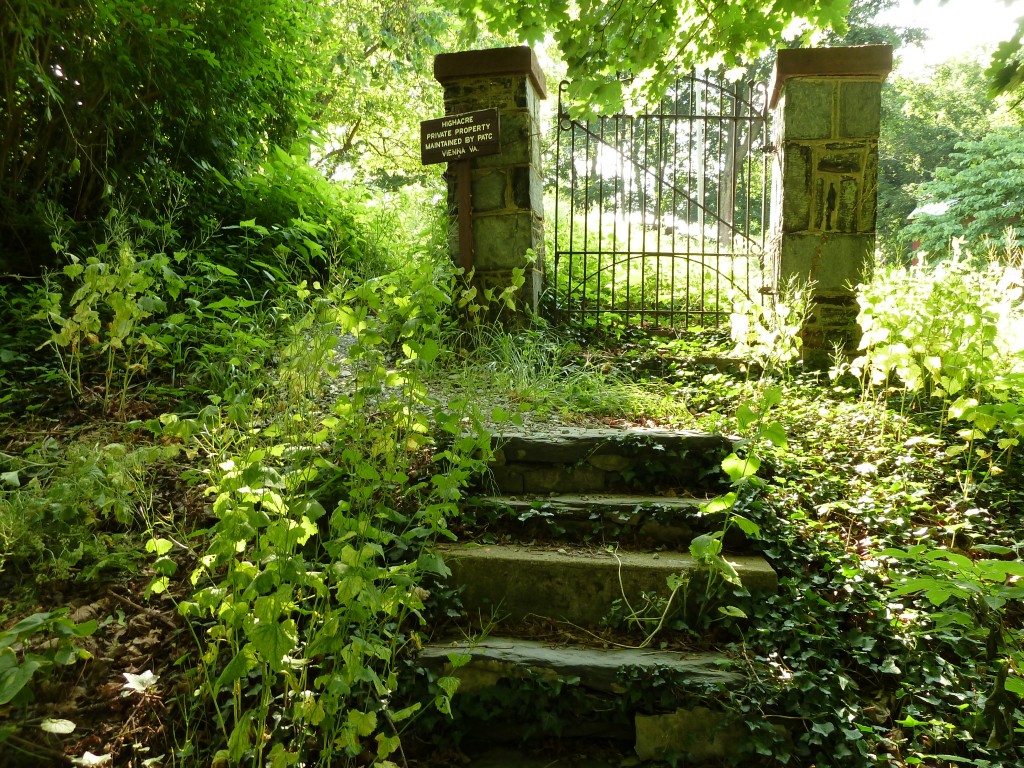 If you go back down to the roadway and keep heading in the direction you were going, you’ll find this path. It leads to the other side of the cemetary near Jefferson Rock. 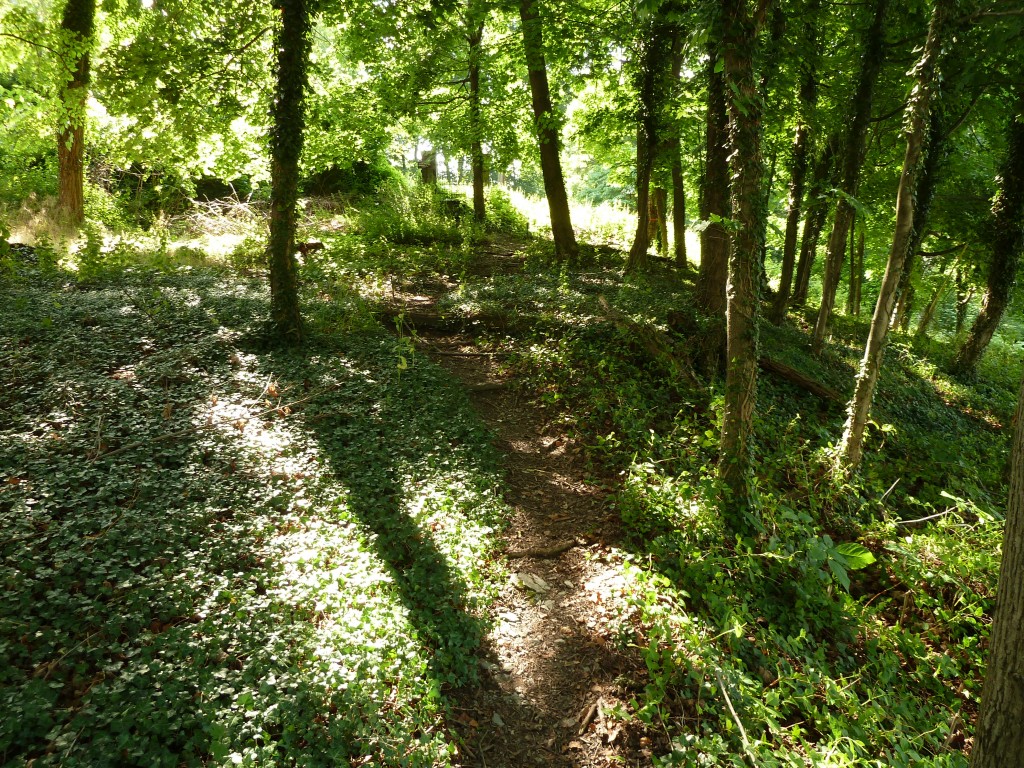 I followed the road at the top of the path, and it led me back to Washington Street where I saw three mail boxes in front of some old wooden stairs. 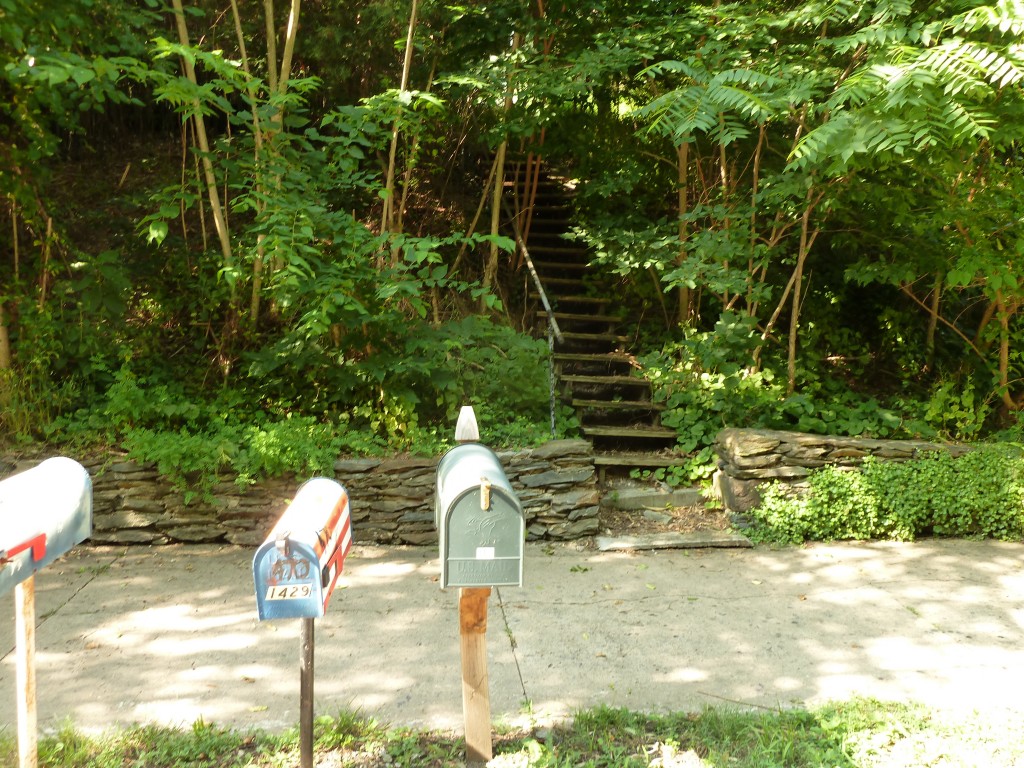 I was hoping to find houses fronting the stairs. Instead I found an overgrown lawn with an abandonned house. I then wrapped up my visit to Harpers Ferry by continuing up Washington Street to my car and to go on to my next destination.

I hope this post illustrates how you can use stairs and the basics of wandering to meander through a town to see it from an angle that most people do not think of.