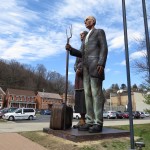 April 9, 2020 – Due to the continuing popularity of this blog post about Dubuque since it was written in 2013, I have expanded upon the topic of Dubuque and Galena and have just completed a new book called – Exploring Galena and Dubuque on Foot: By Sidewalk, Stairway, and Path. The book should be available for shipping on April 20, 2020. You can order the book right here on this website. Over time the book will become available at retailers in Dubuque and Galena. Thank you, David Ryan

If your only experience with the Midwest has been to fly into Chicago, you would be correct in saying that the area is really flat. But if you travel only three or four hours to the west to where the Mississippi River connects Iowa, Minnesota, Wisconsin, and Illinois, you will find a completely different landscape.

There you will find hills, deep valleys, and bluffs. The most recent Ice Age glaciers missed this part of the country and never had a chance to bulldoze the land flat. Melt water from the retreating glaciers added to the landscape by carving the large bluffs along the Upper Mississippi River Valley. The combination of the two makes it one of the prettiest places in the United States.

With many cities and towns along the Mississippi, I figured that some of them must have public stairways to connect development above the bluffs with development close to the river. That was enough to get me started. I did some research and learned that there were towns with stairs. I cleared the calendar and went on a road trip with my dog Petey last month to check them out.

My first stop on the Mississippi River was Dubuque, Iowa. It is on the west side of the river across from the Illinois/Wisconsin border. It had its beginnings in the mid-19th century as a lead mining center and river port.

Even though lead mining disappeared early in its history and the importance of river commerce declined many decades ago, Dubuque remains a viable community today with a population of around 60,000 people. Despite its many changes Dubuque has managed to retain much of its 19th century architecture and character. And to an outsider, it seems to have just enough funkiness to be interesting.

In my research I learned that in addition to stairways that Dubuque at one time had two funicular railroads. From previous travels I knew that one of the funicular railroads was still operational. It claims to be the world’s shortest and steepest railroad. And from various correspondences I learned where various stairways could be found.

With that I was ready to start walking and anxious to see what I could see. 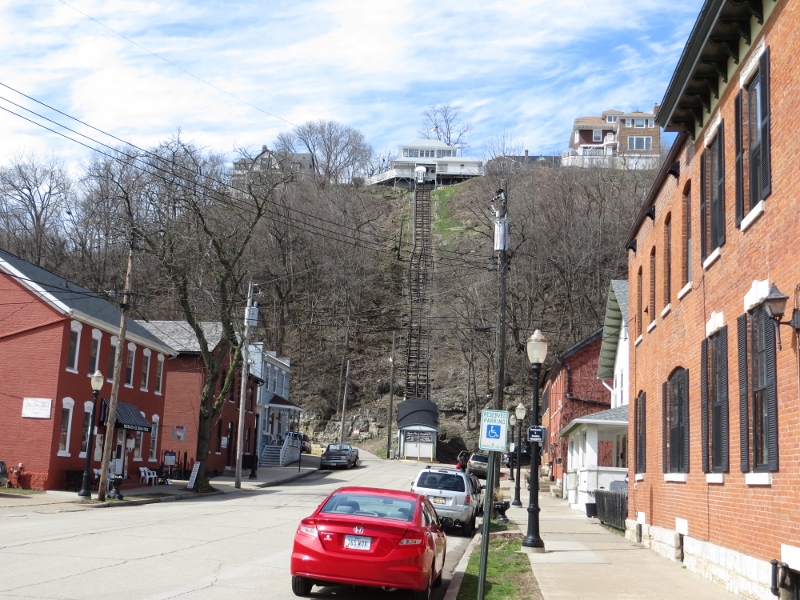 We found a suitable parking place near the funicular railroad (Fenlon Place Elevator) and headed north. We would ride the funicular later in our walk. 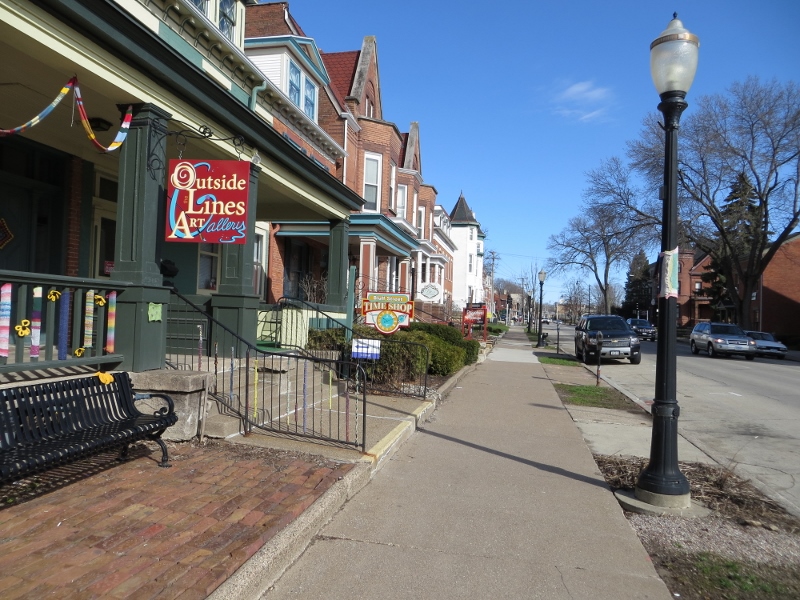 We passed some interesting buildings and found our first stairway a block north on 5th Street. 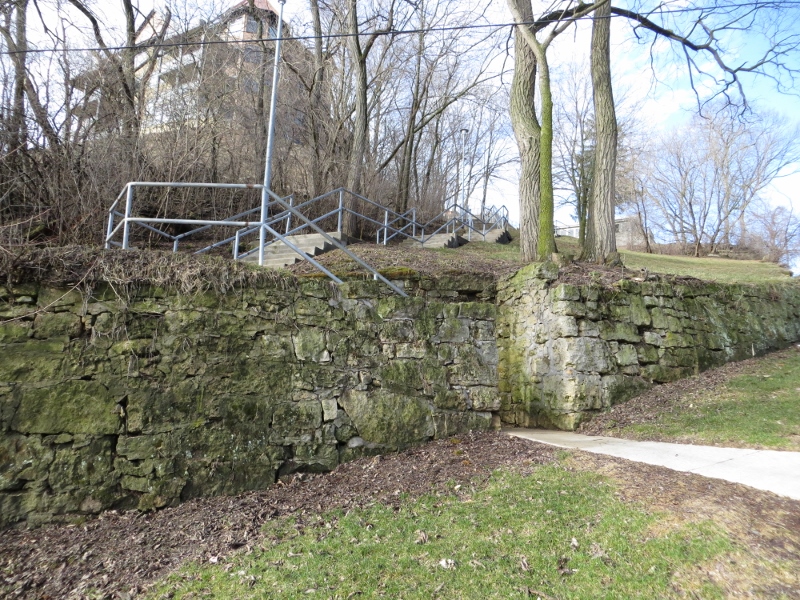 We climbed the 127 steps (by my count) to the top and found a very nice neighborhood of very large old homes. 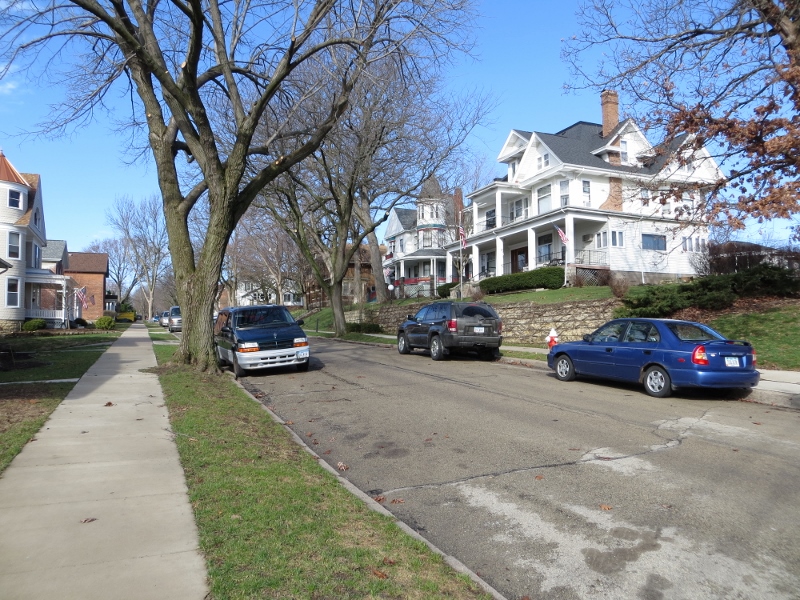 If you lived on this street you would have the choice of taking the stairs or the funicular to the bottom of the bluff. 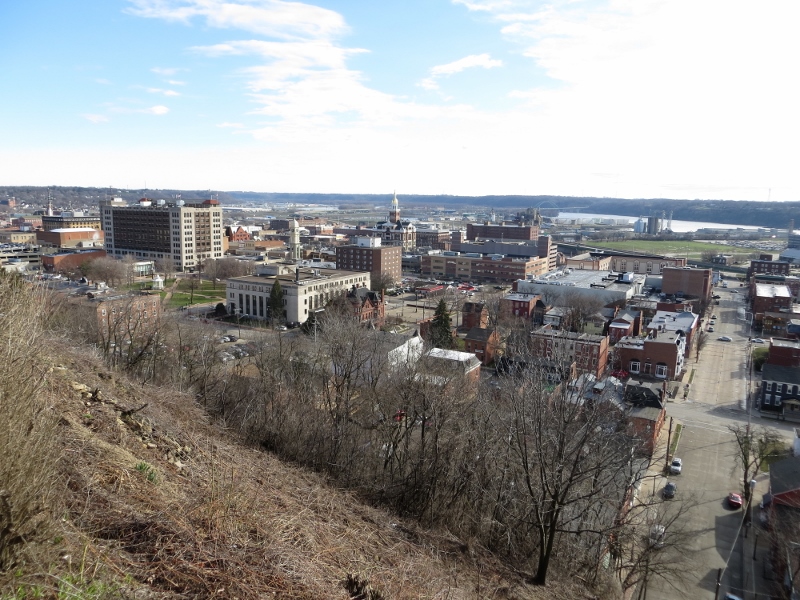 You also have a great view of downtown Dubuque and the Mississippi River from the top of the bluff. 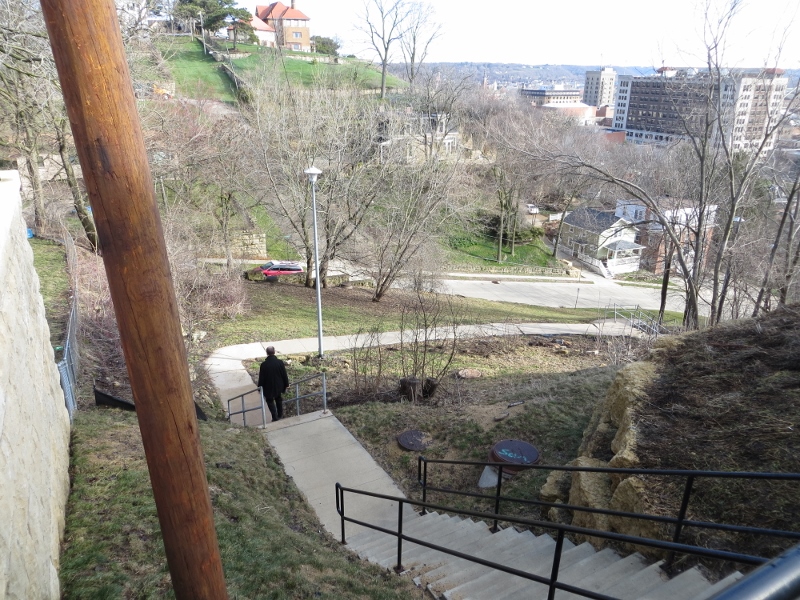 With downtown being only a couple of blocks away taking the stairs or the funicular would be a great way to get to work. 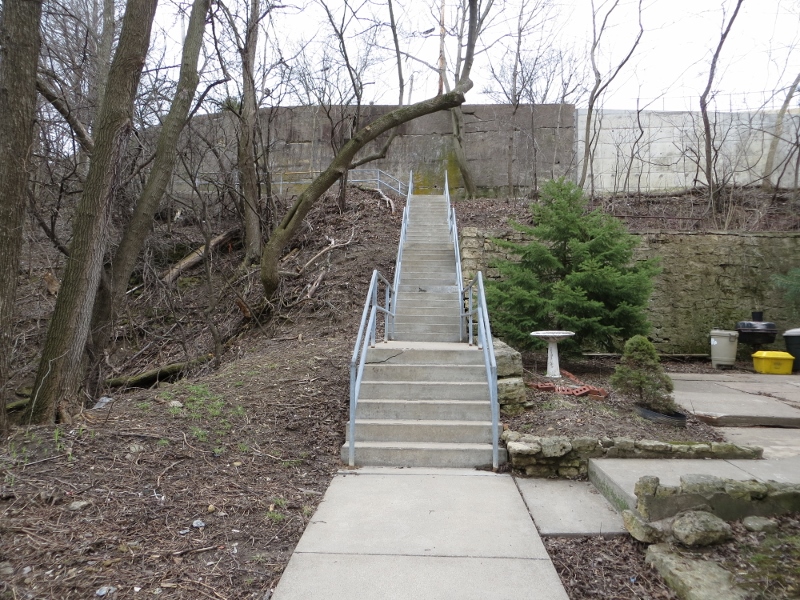 As we continued our walk, we found these stairs off of Hill Street. 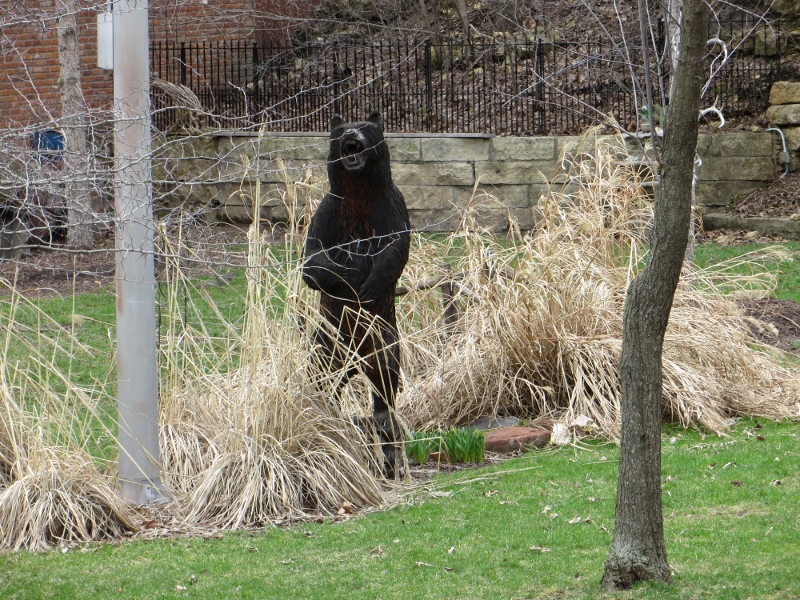 And when we reached the top after climbing the stairway’s 60 steps we were greeted by this friendly fellow. 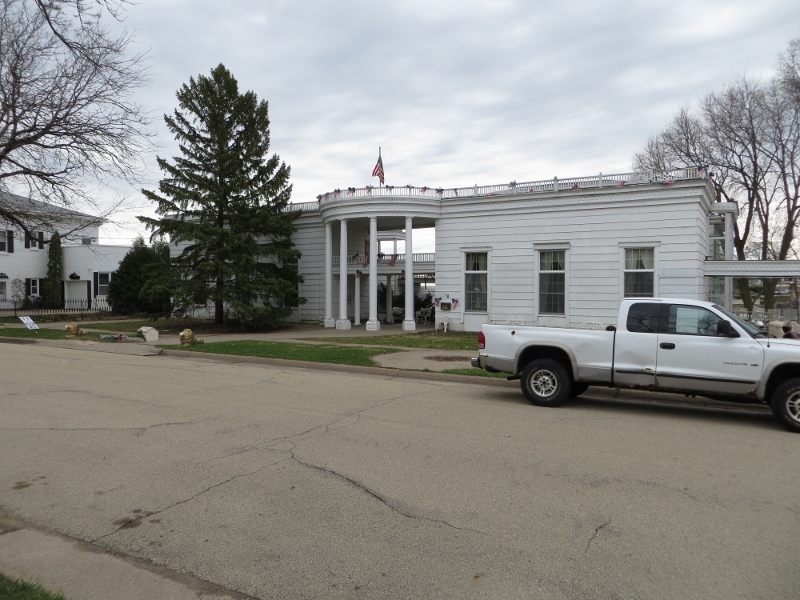 And when we looked across the street, we discovered that we were in Washington, DC! 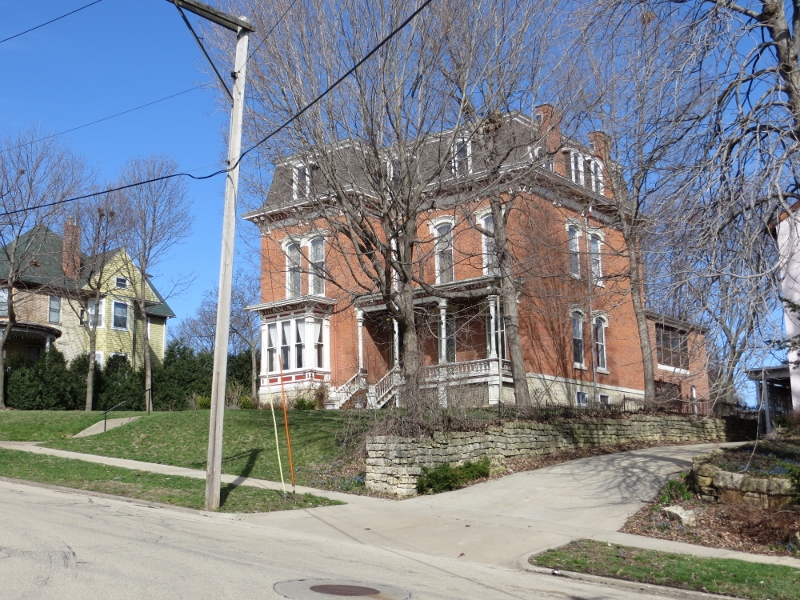 We continued our walk and never found a shortage of interesting old homes. 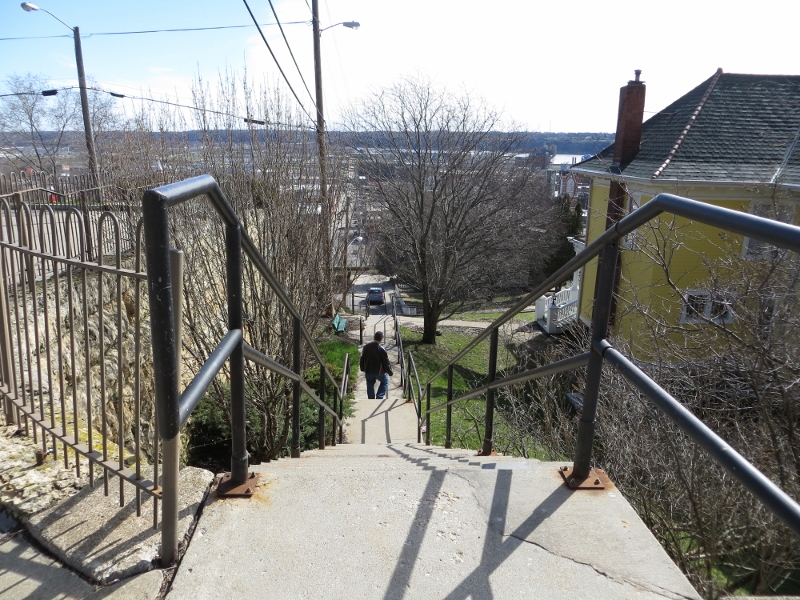 When we reached 11th Street we found these stairs heading down the bluff to downtown. 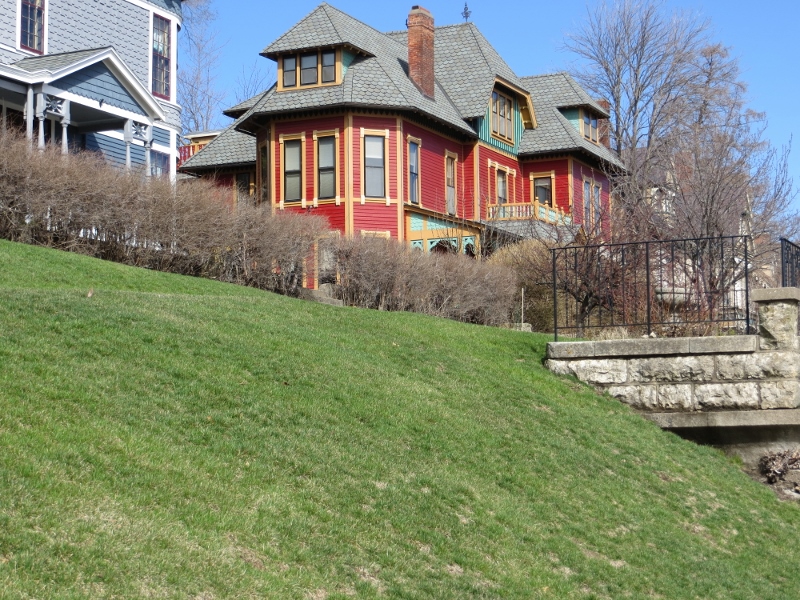 The stairway crossed a street, and to no surprise that street too had interesting houses. 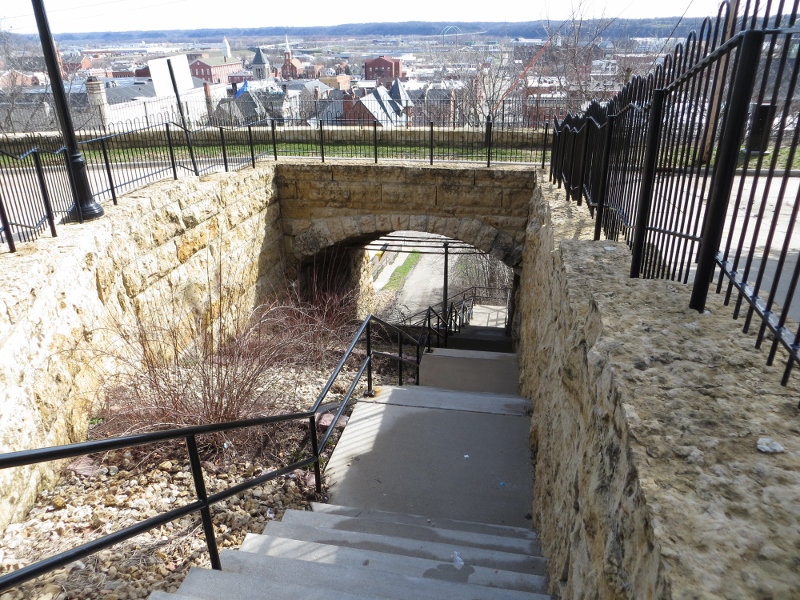 The stairway then went under a street. The tunnel under the street was built to accommodate Dubuque’s other funicular railroad that shut down in 1929. 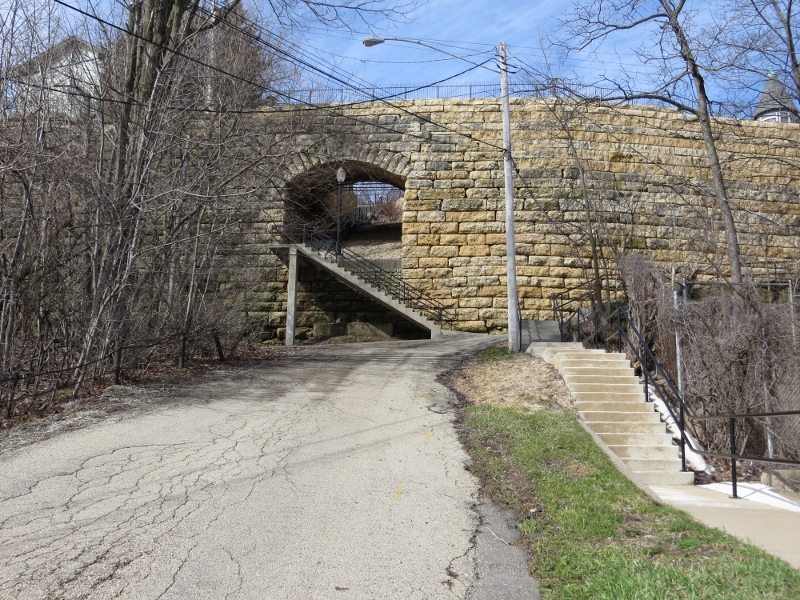 Here’s what the tunnel looks like from below. By the time we finished the stairway I had counted 180 steps. 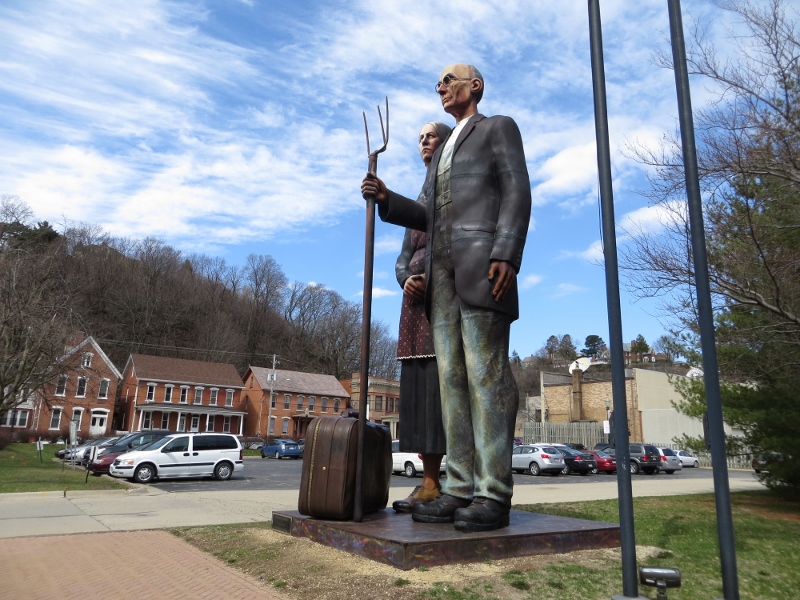 As we continued to wander we passed these folks standing outside the local art museum. 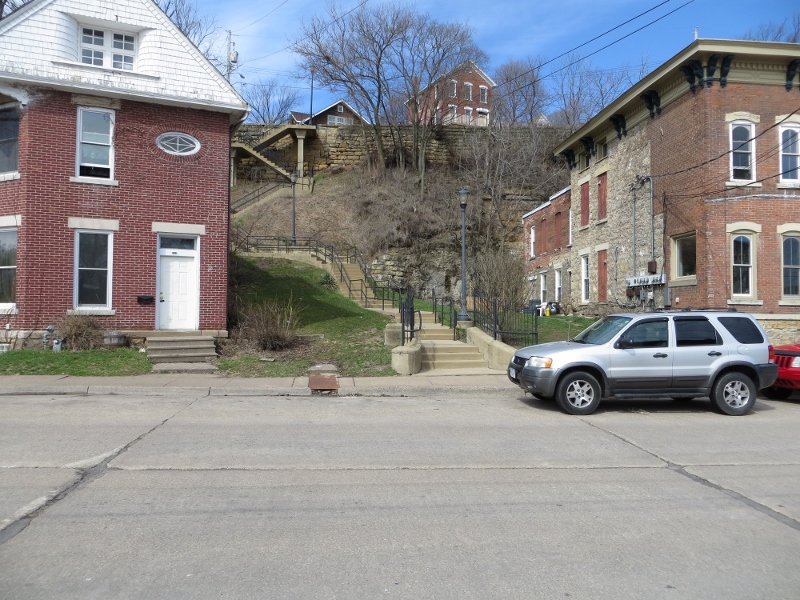 As we worked our way north we found these steps near 14th. This stairway has by my count 90 steps. 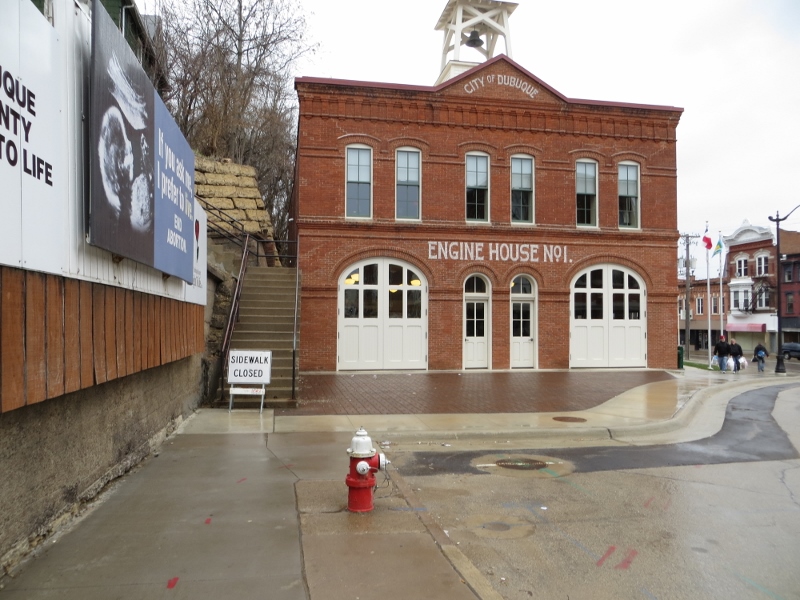 Further north we found these stairs at 18th Street. Although they we closed, we climbed the 69 steps anyways. 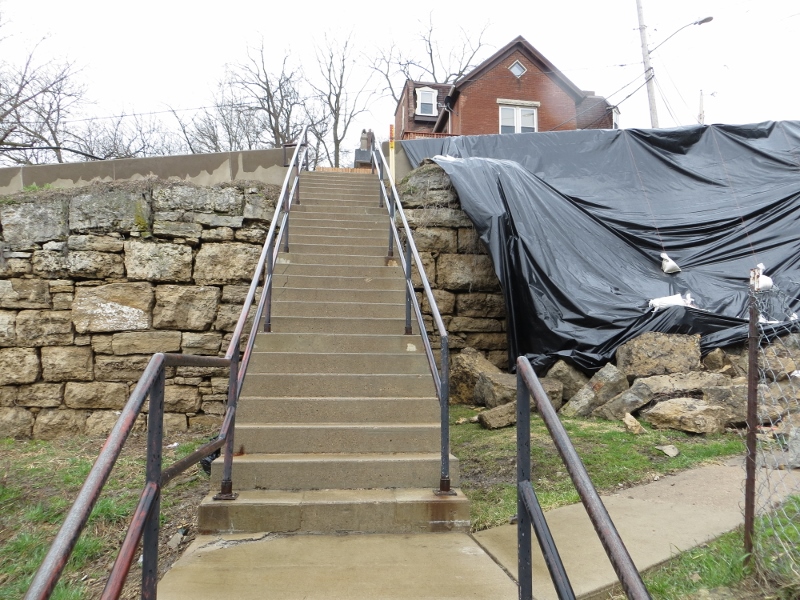 When we reached the top we found out why they were closed. The road embankment at the top had collapsed because of the recent rains. 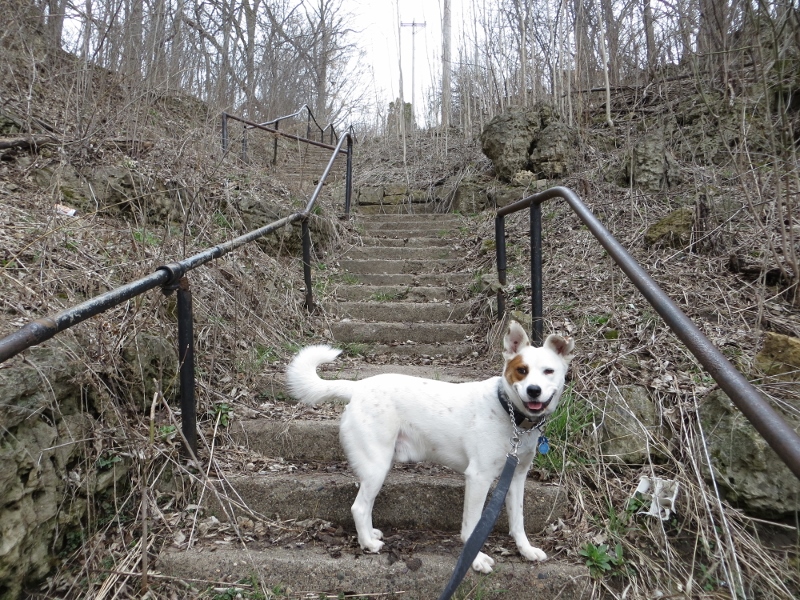 We even found stairways that have been closed for good reason. I’m not sure if Petey likes the idea of climbing these stairs. This stairway had 155 steps; another closed stairway a block or two away had 106 steps. 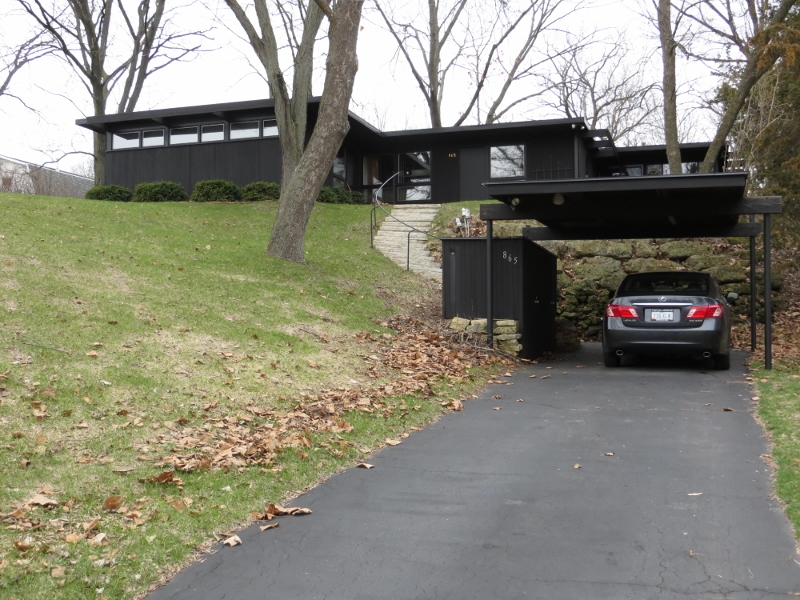 We also found interesting houses that were not from the 19th Century. 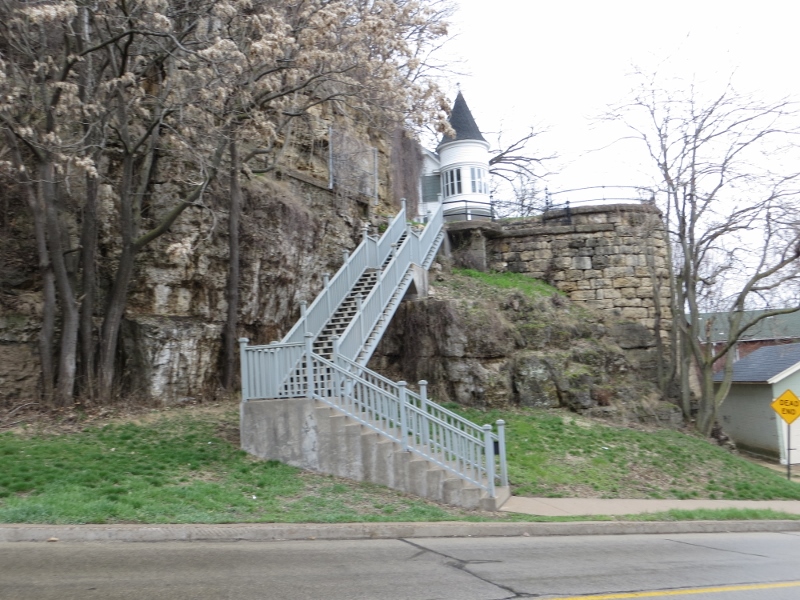 We even found private stairs. It wasn’t until we reached the top that we realized this was leading to someone’s front door.

These are not the only stairways and interesting buildings that we found. We found several other stairways: some known by the city and some that weren’t. I am sure someone who lives in Dubuque could have shown me more. But for someone who likes to walk around to see what they can see, Dubuque is an amazing place to wander.