You can join this walk anywhere along the route and make as many detours as you wish. The mapped walk is around 2.3 miles long. Your variations can make this walk longer or shorter. The numbers on the map correspond to the sequence of the narrative. 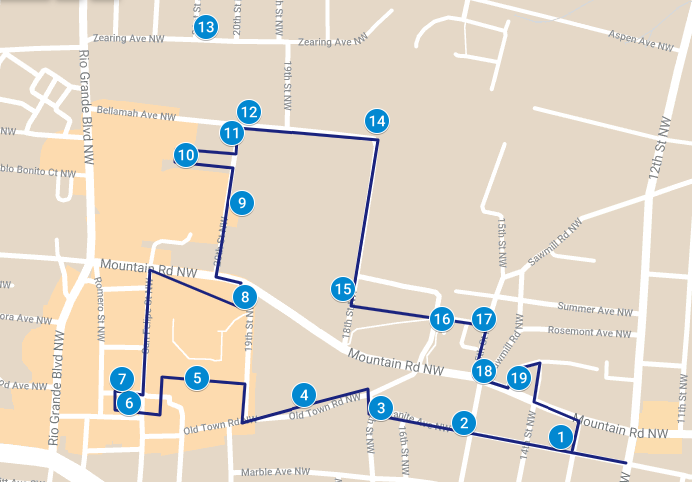 If you’re following the narrative on your mobile device, you might want to print the map beforehand as a reference. The narrative does provide turn-by-turn instructions.

This walk begins and ends near Villa Mathias just west of 12th and Mountain at the intersection of Brother Mathias (13th Street) and Granite. This is the same place where Walk # 1 begins and ends. Walk # 3 can be considered an extension of Walk # 1.

Villa Mathias is a religious community and residency for the Brothers of St. John of God who run the Good Shepherd Homeless Center at 2nd and Iron Streets south of Downtown. Brother Mathias Barrett founded Good Shepherd in 1951 and is buried at Villa Mathias. 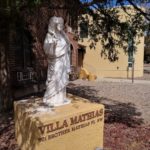 For this walk, we’ll head west on Granite along Villa Mathias, which occupies the entire block, and cross 14th Street. 14th Street is a Bicycle Boulevard and part of the City’s 50-Mile Loop Route. 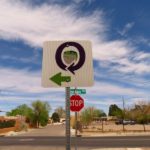 Continuing west on Granite, we’ll soon reach a Little Free Library at the NW corner of 15th and Granite. Just behind the Library is the “World Famous” Chihuahua Sunflower Fence. On a good day you might see four, and maybe even more, Chihuahuas poking through the sunflowers and greeting you with a bark. 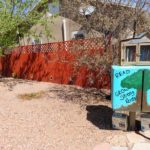 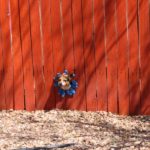 After saying hi to the Chihuahuas, we’ll continue west on Granite to the next street on the right (17th Street). Just before reaching 17th Street you’ll see an enormous statue of a saint standing in the backyard of the house at the corner. 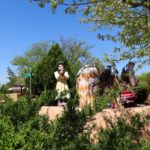 The statue is one of several that used to be paraded around on Albuquerque’s Founders’ Day Festival. The statues were commissioned by Millie Santillanes, who has now passed, to celebrate the state’s Hispanic heritage. Santillanes was a community activist and City official. She was even one the models for the La Jornada sculpture (# 8) that we’ll pass later in the walk.

When we reach 17th Street, we’ll make a right-hand turn and almost immediately reach Tiguex Park. The Park could be thought of as Albuquerque’s front yard as it is surrounded by the City’s museums and is oftentimes used for rallies and other community events. 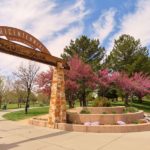 For our walk, we’ll continue along Tiguex Park on Old Town Road to the end of the park at 19th Street. There, we’ll cross 19th and cut through the large parking lot to the Eastern Portal of Old Town. 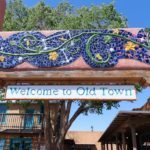 After passing through the Portal, we’ll wind our way through the many shops and places to eat and eventually reach Old Town Plaza. 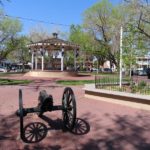 Feel free to wander around to check out the shops in the Plaza area and take some time to see San Felipe de Neri Church, and to go inside if you have the time, on the north side of the Plaza. The church building dates back to 1793. 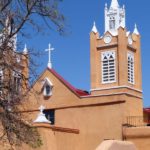 After the church, we’ll leave the Plaza area and head north on San Felipe Street. In addition to the normal array of shops, you might spot some specializing in Breaking Bad souvenirs. When we reach Mountain Road, we’ll turn right and head toward 19th Street.

Take some time to check out the art works on the grounds of the Albuquerque Museum. And when we reach the corner, you’ll want to check out the La Jornada complex of statues depicting the Hispanic arrival to New Mexico. The statue of Juan de Oñate at the head of the procession was removed last summer after several protests. 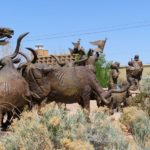 After the La Jornada statue, we’ll cross Mountain Road and head north on 20th Street. On our right we’ll pass a building with a glass mural in front. It’s the home of Spur Line Supply and Mama’s Minerals. 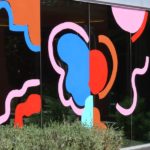 This is a good time to cross to the west side of 20th Street and to cut across the parking lot to check out the grounds of Hotel Albuquerque. Look around and you’ll find a very interesting wedding chapel. 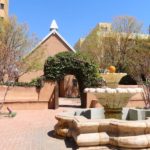 From the grounds of Hotel Albuquerque, we’ll head to the corner of 20th and Bellamah to check out the relatively new and luxurious Hotel Chaco. Just take a quick step inside as the lobby is amazing. Both hotels are owned by Heritage Hotels. 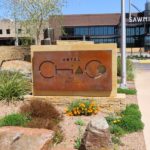 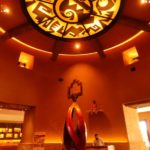 Across the street from Hotel Chaco is Sawmill Market. Sawmill is an upscale food court that opened just before everything was shut down by the pandemic. When it has been open, it has been very popular. It, too, is a Heritage Hotels property. 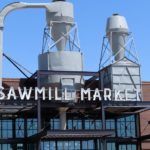 If you have some time, you might want to check out a 1970s-era Pyramid house on the backside of Sawmill Market. To get there, follow Sawmill Market east to 19th Street. Go north on 19th to Zearing Avenue (the road behind the Market). Turn left and head west on Zearing to 21st Street. Turn right, and you’ll see the Pyramid on the east side of the street. Downtown Albuquerque News did a story on the Pyramid earlier this year. Click Here to read the story. 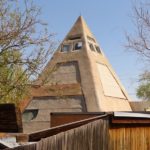 Whether you choose to check out the Pyramid or not, our walk will continue east from Sawmill Market on Bellamah. Along the way, we’ll pass the mixed-use Sawmill District development that includes housing, the National Institute of Flamenco, and Ponderosa Brewing. If you wish to do some exploring, it is possible to walk through the Sawmill District to the industrial area to the east and all the way to 12th Street. 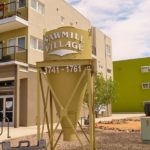 Our walk will continue on Bellamah as it curves to the south to become 19th Street. Along the way we’ll pass a storage yard for Albuquerque’s latest business-success story, Array Technologies. This is also a good chance to check out the dinosaurs in front of the Natural History Museum and the ongoing construction at Explora. 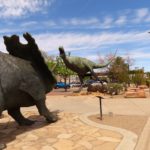 If we go around the construction and work our way through Explora’s parking lot, we’ll find a pedestrian passage to Rosemont Avenue on the east side of Explora. 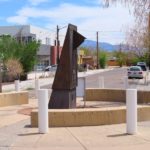 We can then take Rosemont to 15th Street and find another Little Free Library a few feet to the north at the NW corner of 15th and Summer. If you want you can take Summer Avenue all the way to 12th Street. A few more feet north, you’ll run into Sawmill Road. That, too, goes to 12th Street. If you go beyond Sawmill, you’ll find that 15th Street becomes almost rural, and if you’re lucky, you might meet a local artist who has a chapel behind his house. You can also take 15th Street north to Sawmill Road or Summer Avenue to reach 12th Street.

But for our walk we follow 15th Street south to Mountain. The former Little Red Hamburger Hut will be on our left. The popular restaurant closed down a couple of years ago right after its front wall was repainted. Fortunately the building now has a new owner with plans to reopen it as some sort of business. 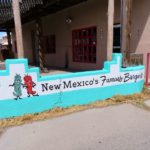 We’re now very close to our starting point, but if you’re still up for some more walking, you can make a small detour on Claire Court to 14th Street and back to Mountain. The loop has some very interesting houses. 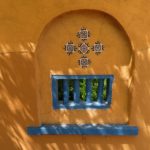 And with that we are now back to our starting point to conclude our walk.