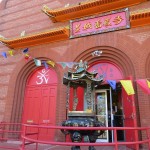 If you happen to be driving through Chicago on one of its expressways, you can’t help but to notice the number of church steeples soaring above the surrounding trees and houses. There are so many of them that it seems like there could be a church on every block. The only way for you to find out for sure is to get out of your car and start walking.

When you do this, you’ll not only find an answer to your question; you’ll also have the opportunity to walk through the urban landscape to see what else you might notice. Your walk could give you some idea about the community’s geography, history, or culture. You might even spot something that you wouldn’t readily find anywhere else.

Last month while on a whirlwind trip through the Midwest to take some photographs to complement research that I have been doing on the urban landscape of various cities, my dog Petey and I did get off a Chicago expressway to see how close together those churches actually were. We spent a good part of a Saturday walking around an area not too far from the long-gone stockyards. One hundred years ago Chicago was in deed the “Hog butcher of the world” and meat packing along with the stockyards was one of its defining industries.

One of the first things we noticed when we got out of the car was that many of the streets were higher than the building lots. Chicago became an important city because the swampy nature of its location provided an easy portage from the Great Lakes to the Mississippi River basin. Chicago’s swampy nature also meant that many of the streets were very muddy and impossible to use for much of the year.

To solve this problem, many of the streets in the older parts of the city were raised above the mud in the second half of the 19th century.  As a result, the building lots on many of the streets that we walked along were a good four or five feet below the street level.

The sidewalks built along the raised streets were vaulted and hollow underneath. This provided homeowners a ready-made storage area beneath the sidewalk in front of their home. Over time, many of the vaulted sidewalks have been rebuilt and are now solid underneath. 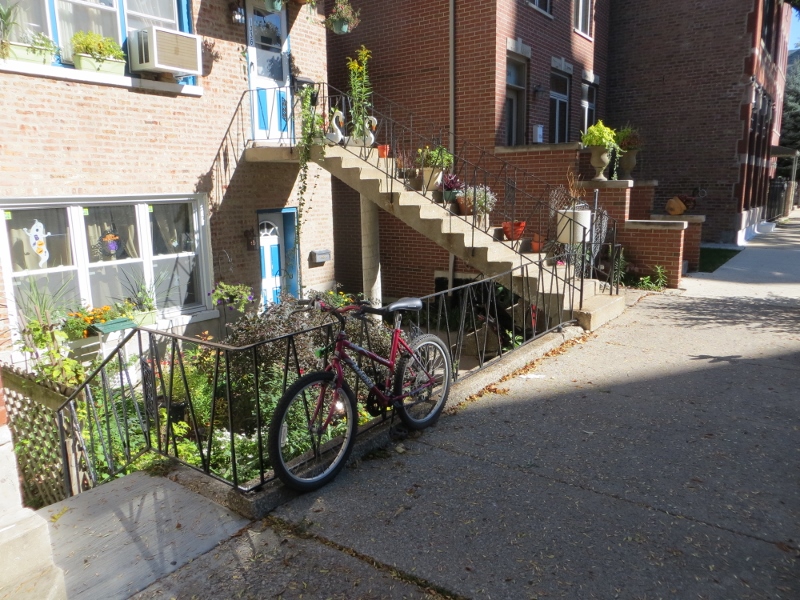 Here’s an example of the building lot being lower than the street. 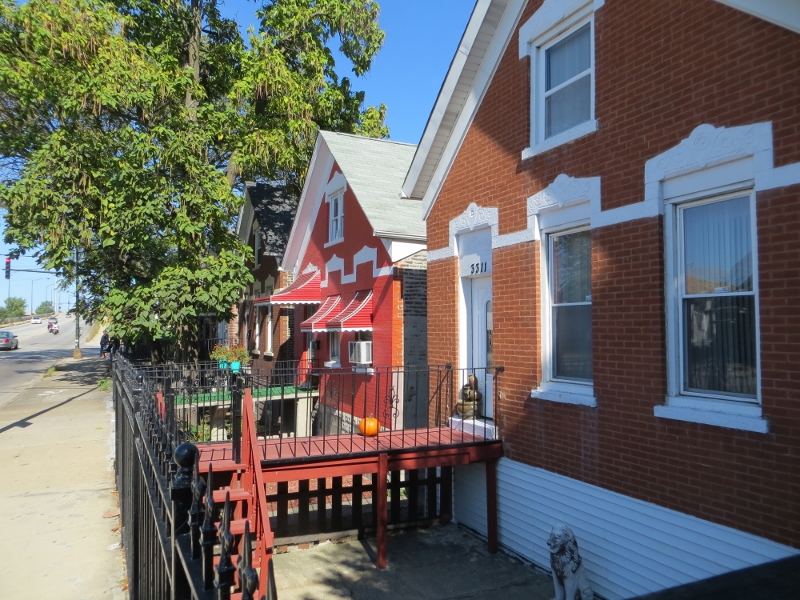 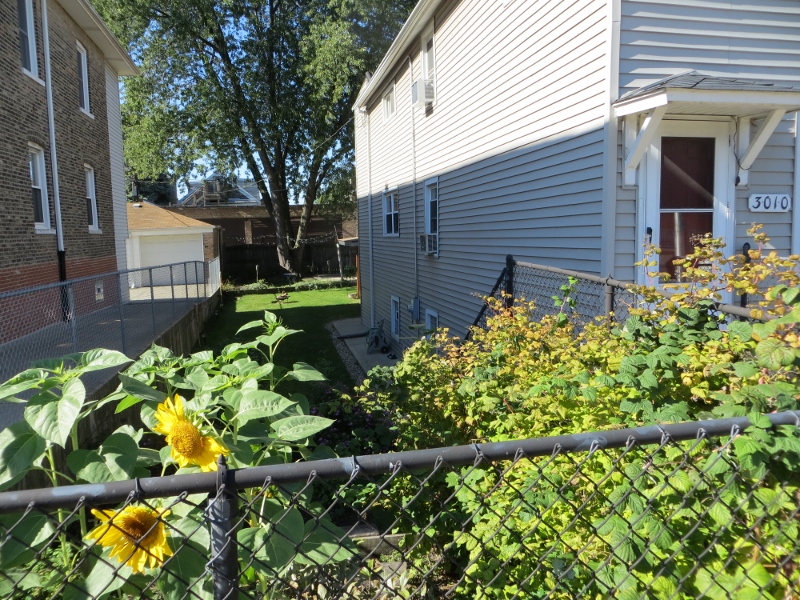 You can see that this side yard is lower than the sidewalk.

After noticing the raised streets, it didn’t take us long to run into our first Catholic church, Immaculate Conception Church, at 31st and Aberdeen streets. The church is now a Benedictine monastery called Monastery of the Holy Cross. With smaller family sizes, people moving to the suburbs, and other factors, the population within the city limits of Chicago has declined from 3,620,962 people in 1950 to 2,695,598 in 2010. As a result, the Catholic Church has been forced to shut down or repurpose many of its parishes. 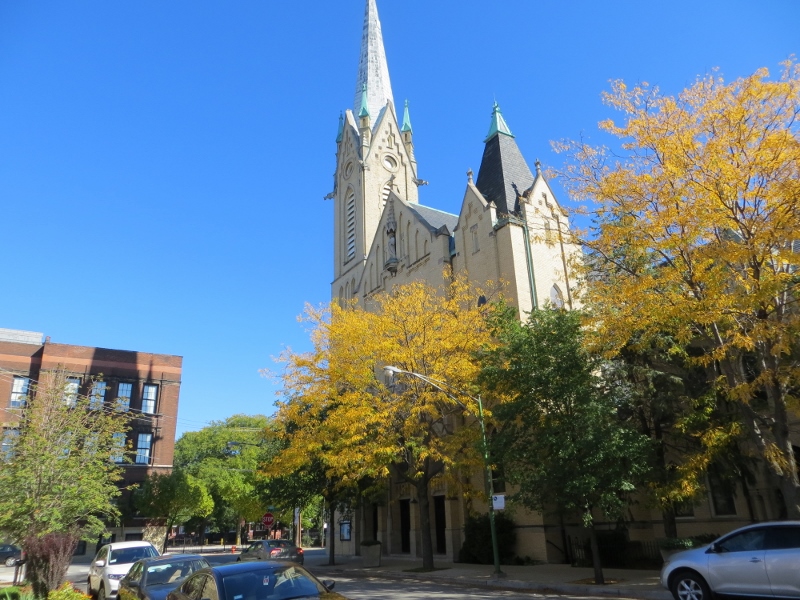 The former Immaculate Conception Church and now the Monastery of the Holy Cross.

From the monastery, we could see another Catholic church just a little more than a block away to the south. In less than five minutes we were on 32nd Street standing in front of St. Mary of Perpetual Help Church. This church is still active and was originally built to serve Polish immigrants moving into the community. 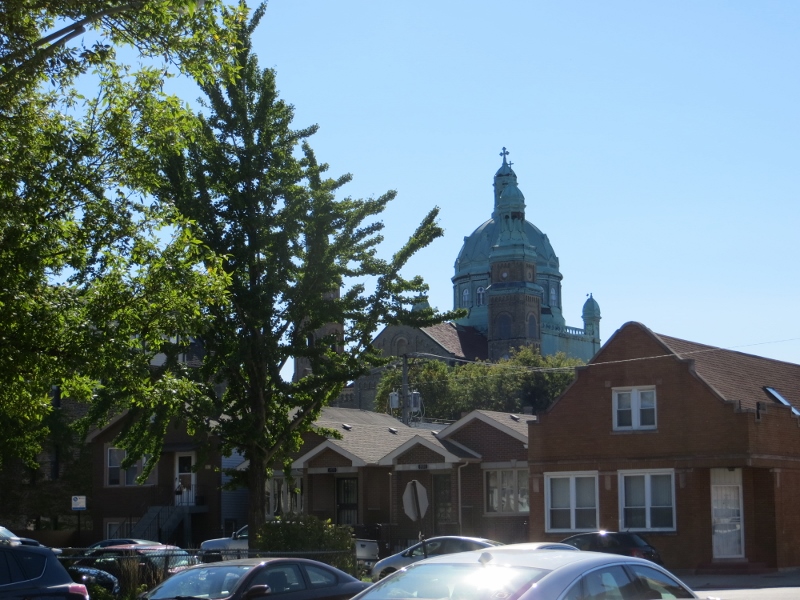 This picture was taken from the same location as the previous church. As you can see they are almost on top of each other. 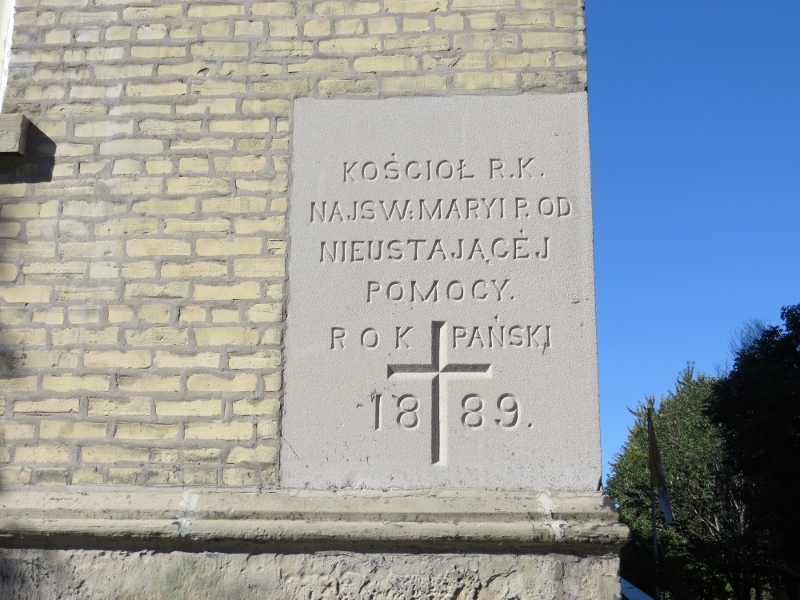 Here’s the corner stone in Polish for St. Mary’s.

If you can step back to 100 to 120 years ago, Chicago’s population was soaring and immigrants from eastern and southern Europe were pouring into neighborhoods like this to take jobs in the stockyards, steel mills, and factories. To help the new arrivals assimilate into the country, the Catholic Church built parishes for the different nationalities. Even with many of the parishes now gone, you can still find neighborhoods where there are still several within a very short walk of each other. 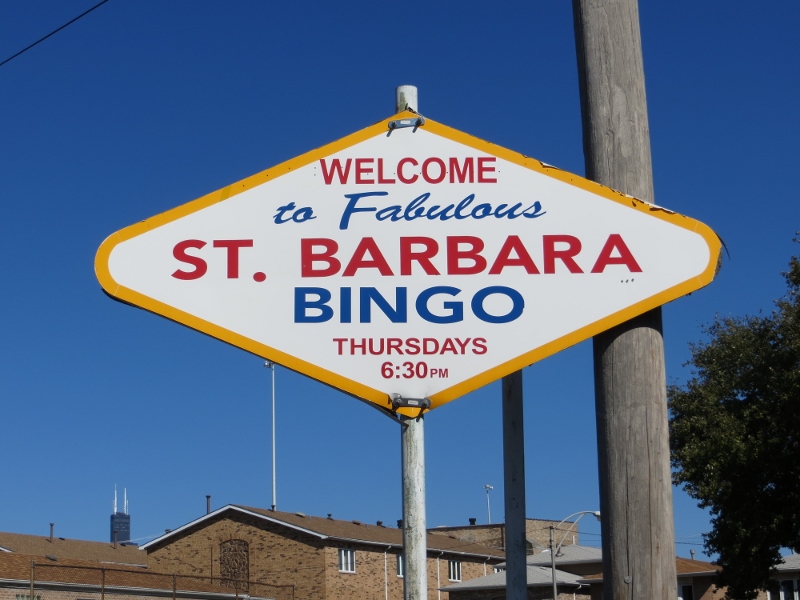 Now you know what you can do the next time you’re in Chicago on a Thursday evening.

St. George’s Church at Lituanica Avenue and 32nd Place was only a block and half east of St. Mary’s. It was built to serve the Lithuanian community. If you’ve read Upton Sinclair’s expose novel about the Chicago stockyards, The Jungle, you may remember that the story’s main character, Jurgis Rudkus, was a Lithuanian immigrant. 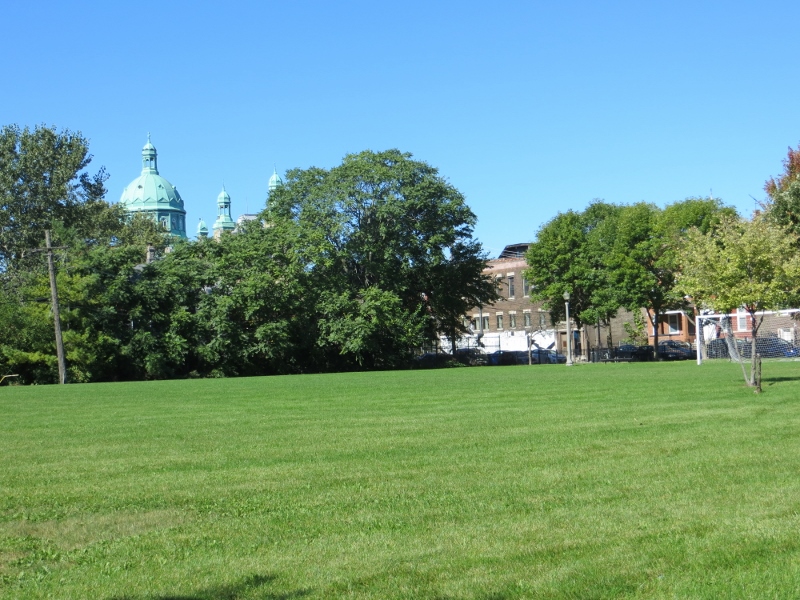 St. George’s was right where we are standing. As you can see St. Mary’s couldn’t be closer.

Although St. George’s is now gone, the parish school building is still standing and is now part of Philip D. Armour Public Elementary School. Philip Armour was a major meatpacker during the heyday of the stockyards which were located less than a mile to the south. 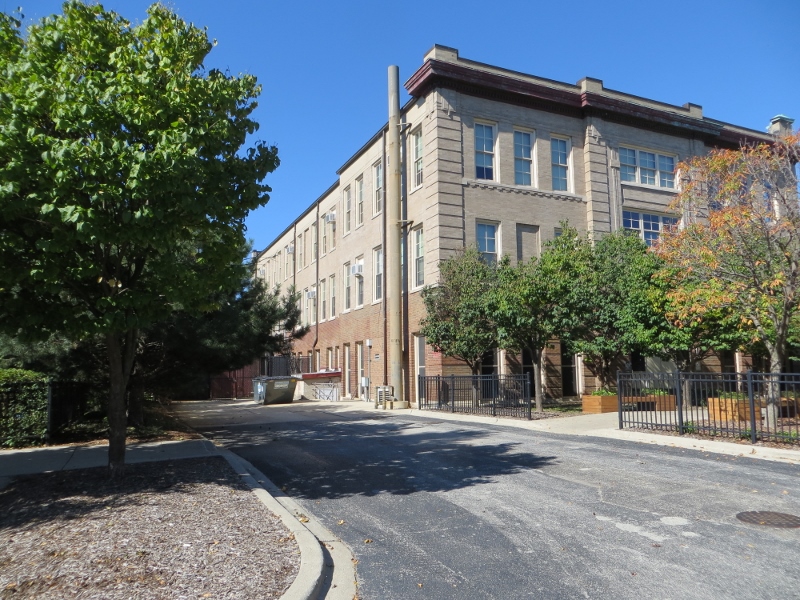 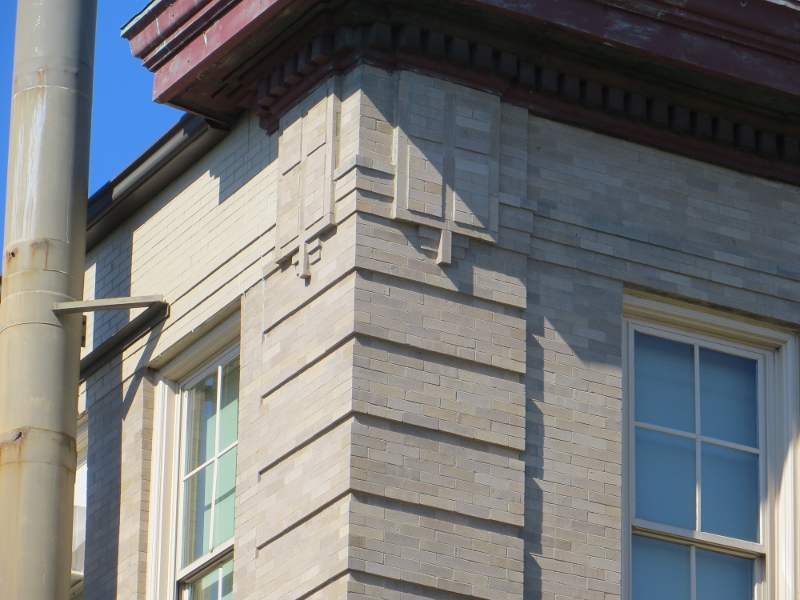 The cross in the corner is a giveaway that this was once a Catholic school. 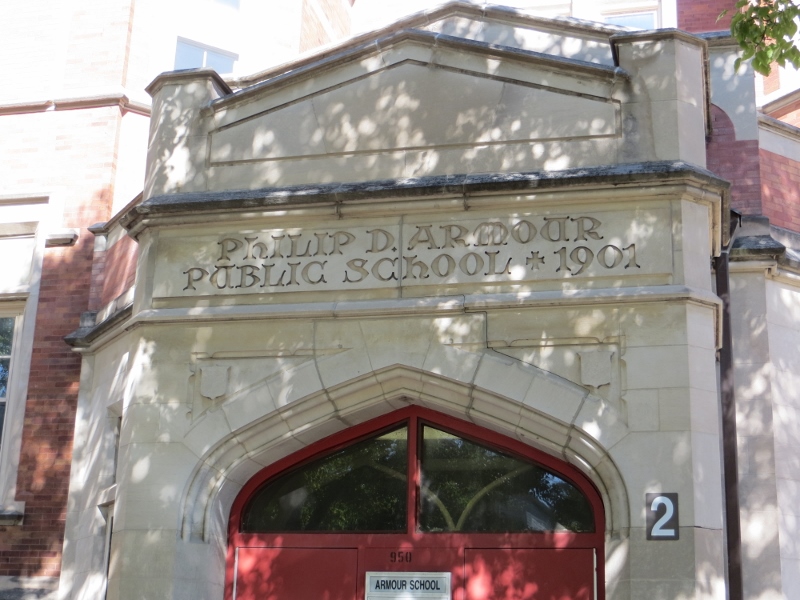 Here’s the main building of Armour School. It’s on the other side of the park from the old parish school.

If you happen to walk through a neighborhood like this you’ll probably notice that many of the buildings look like they may at one time have housed a tavern. They probably did. Several decades ago there were neighborhood taverns and corner bars everywhere. Many were even on residential streets. Although there is still a definite “Tavern Culture” in the Upper Midwest, the neighborhood tavern is becoming an endangered species in Chicago.

I found an interesting building about a couple of blocks south of where St. George’s was located at the corner of Lituanica and 34th Place. The building looked like it might have been a tavern. “S. K.” was etched in a concrete medallion at the top of the building and “S. K. Buffet” was spelled out in the floor tile at the entrance.

So far, I haven’t been able to find out anything about the building, but I’m guessing that it was a tavern that once served food. At one time it was common for taverns to serve food free of charge or at a very low price as long as you kept drinking. To make sure that you remained thirsty, the food was often very salty. In the book, The Jungle, Jurgis Rudkus would nurse a nickel beer at a “free” tavern buffet to keep from starving. 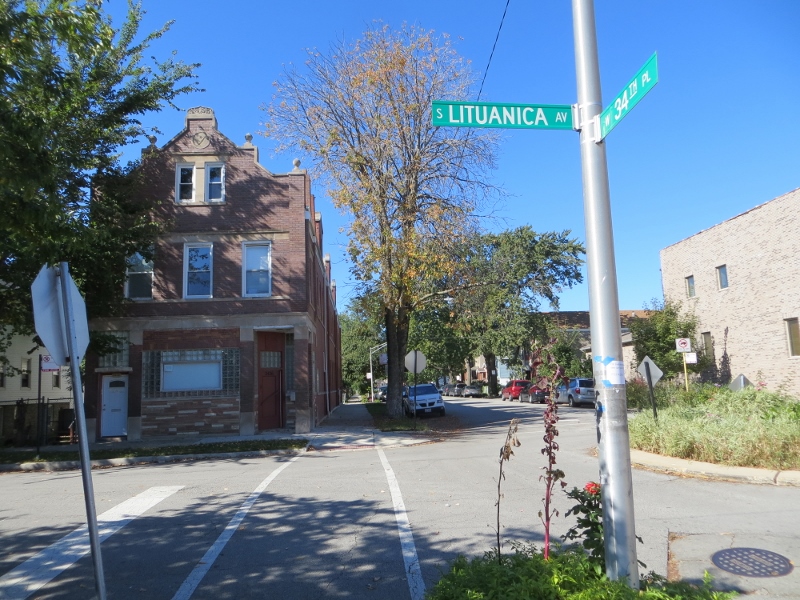 As you can see this building was probably a tavern at one time. 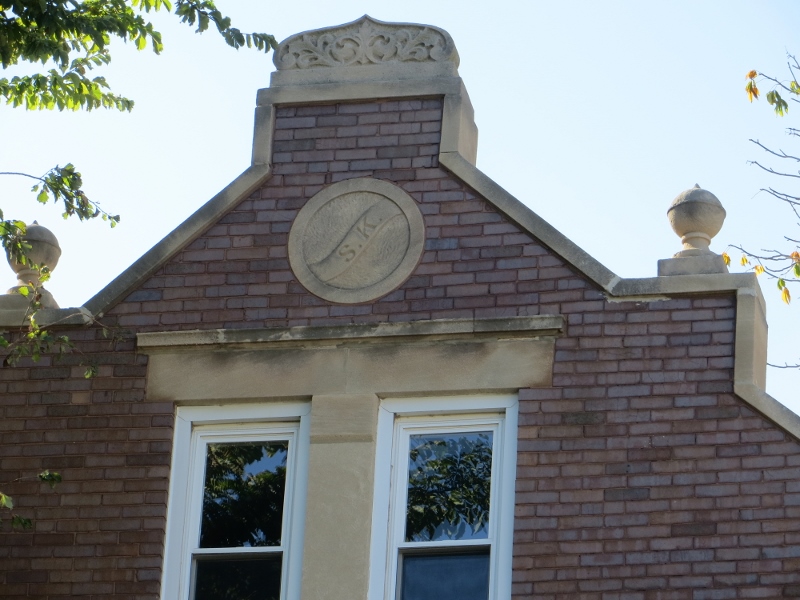 If you look closer at the top medallion, you can see that it says “S. K.”. 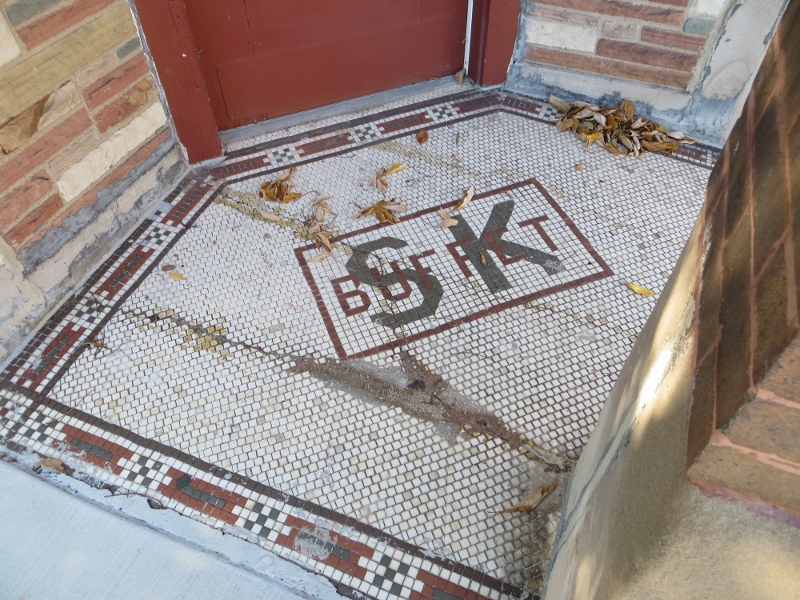 And here’s the entrance.

As Petey and I kept walking, we continued to run into many interesting items. 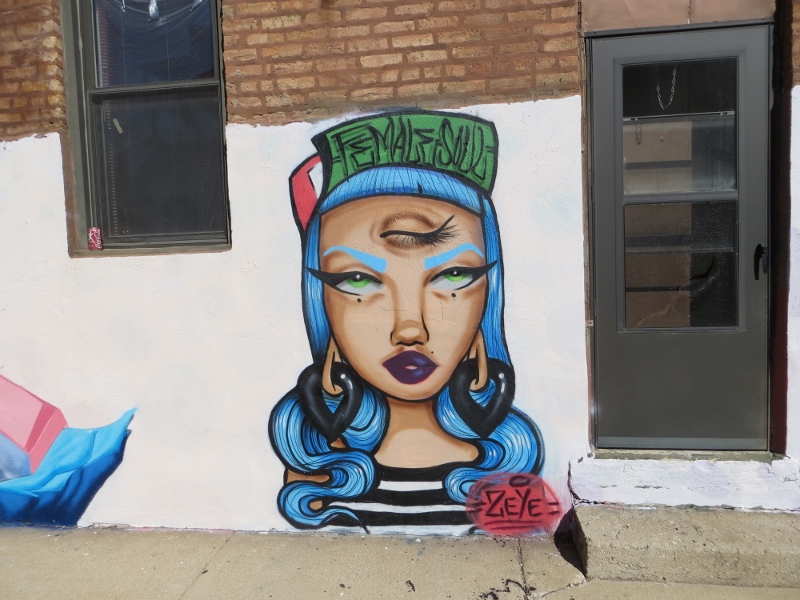 As you can see by the mural, there is now a Mexican influence in the neighborhood. 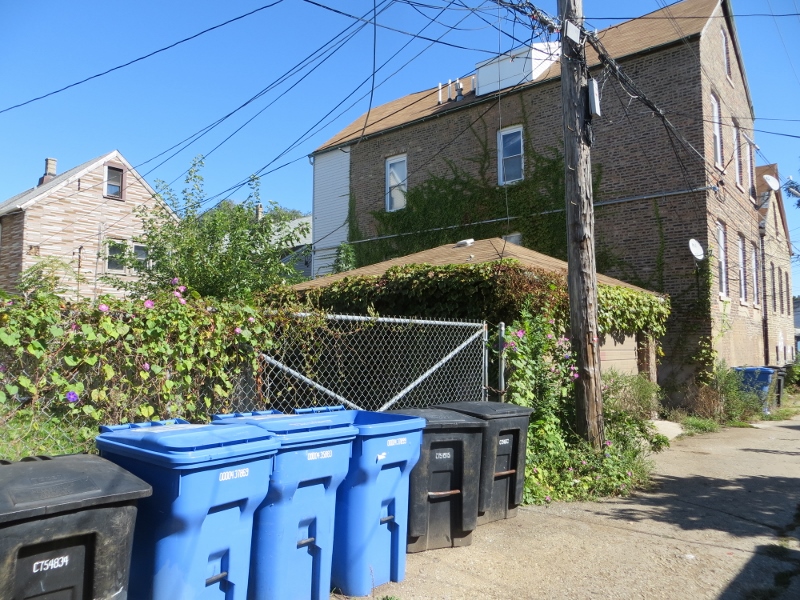 One hundred years ago this neighborhood had twice as many people as it has today. Oftentimes, a second house was built behind the first house. You can find these when you walk down an alley. 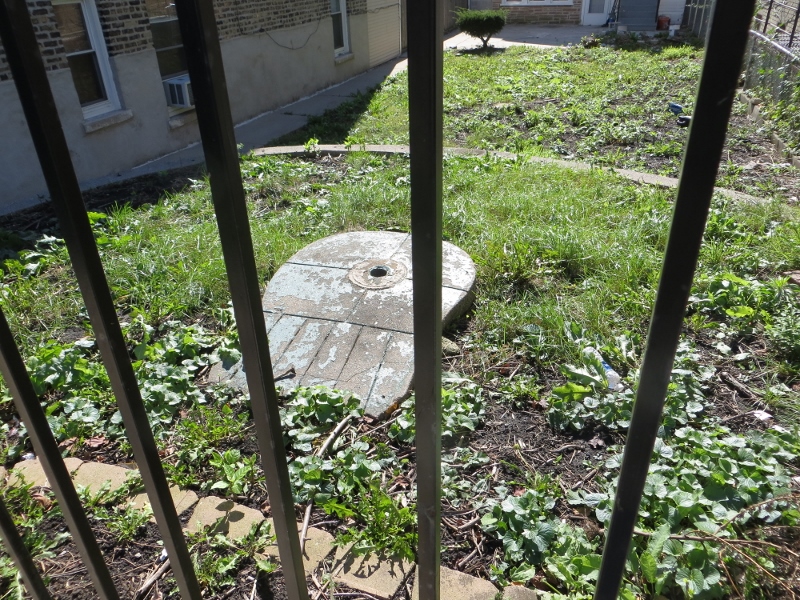 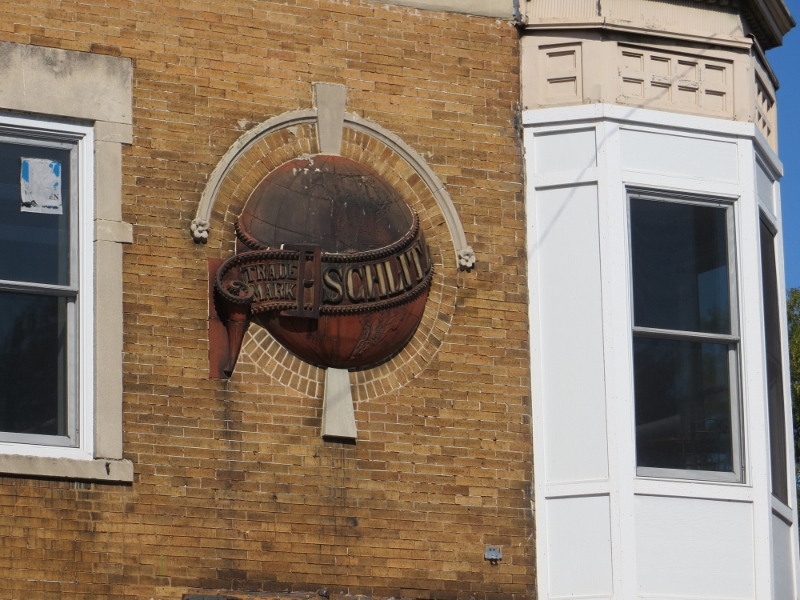 If you’re walking around a neighborhood, keep an eye out for something distinctive. The “Schlitz” globe indicates that this was a pre-prohibition era “tied house” owned by Schlitz Brewery. This tied house is located at the corner of 35th and Western.

Perhaps, the most interesting item was towards the end of our walk when we were circling back to our car. Just to the east of the first church we passed, the monastery, there was old Presbyterian church that is now a Buddhist temple. It might have been the busiest building that we passed on our entire walk. Chinese-Americans from nearby Chinatown and young hipsters were streaming in and out of the building. As they left, they were placing lighted incense sticks into an urn in front of the building. 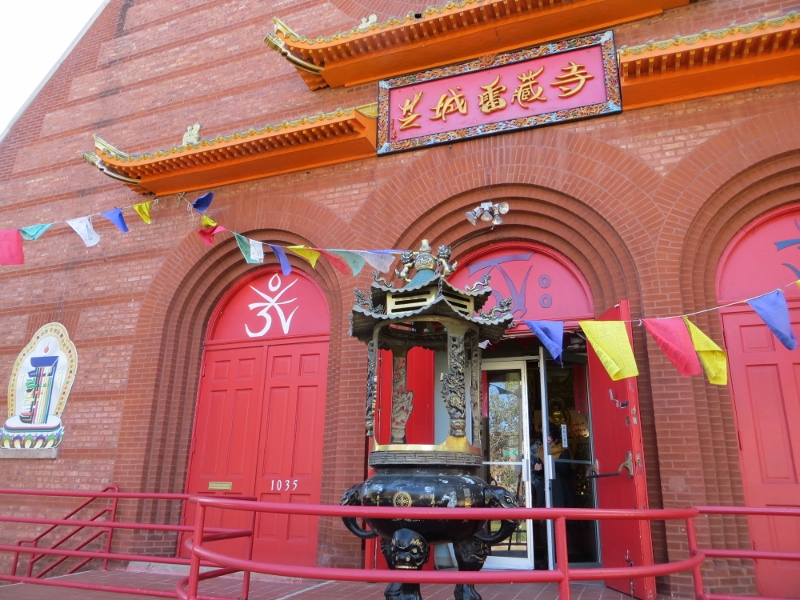 This Buddhist temple used to be a Presbyterian church and is right next door to the Catholic monastery.

If nothing else, the Buddhist temple is a symbol of how communities continue to evolve. Compare this to what it would have been like when Jurgis Rudkus would have walked these streets. It’s being able to see this change and making amazing little discoveries at every corner that makes walking around a city as wonderful as walking through mountains and wilderness.