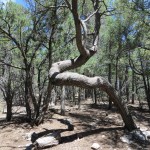 A couple of weeks ago the dogs and I decided to escape the heat by taking a walk in the nearby Sandia Mountains. Before leaving, I took a look at 60 Hikes within 60 Miles: Albuquerque by Stephen Ausherman and Sandia Mountain Hiking Guide by Mike Coltrin. The Faulty Trail is featured in Hikes 2 and 14 of the 3rd edition of the 60 Hikes book.

The Coltrin book mentioned a thong tree along the Faulty Trail. A thong tree is where a young sapling is tied to make a ninety degree bend in the tree trunk. The tree eventually outgrows the thong to become a pointer to a specific landmark. In this case Cañoncito Spring.

I had hiked the Faulty Trail many times and was pretty sure that I had seen the thong tree, but I wanted to see it again to make sure that I was thinking about the same tree that was mentioned in the book. I had also seen the travertine pools before. But since it has been a few years since I last checked on them, I thought it would be worthwhile to see if the recent drought has affected them. So with a couple of ideas now in place, we were ready to go walk along the Faulty Trail.

Ideas are a basic part of wandering as they are great for getting you out. Once you’re out, you can then let your wandering skills take over to see what else you can discover. And a great way to get some ideas is to have a few good walking, hiking, or nature guides on your bookshelf.

I personally like walking along the Faulty Trail as it is just a walk in the woods. It doesn’t go to the top of the mountain. It doesn’t have many steep climbs, and it isn’t on anyone’s must do list. It’s just a nice place to walk and a great place to see what you can see. And this walk was no exception. 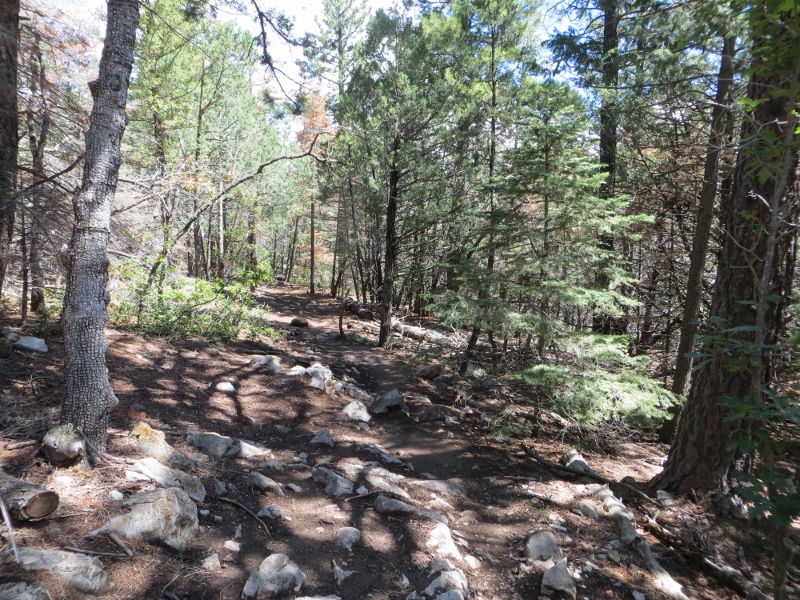 This is pretty much what you get when you walk along the Faulty Trail. If you look around you’ll notice plenty of limestone along the trail. 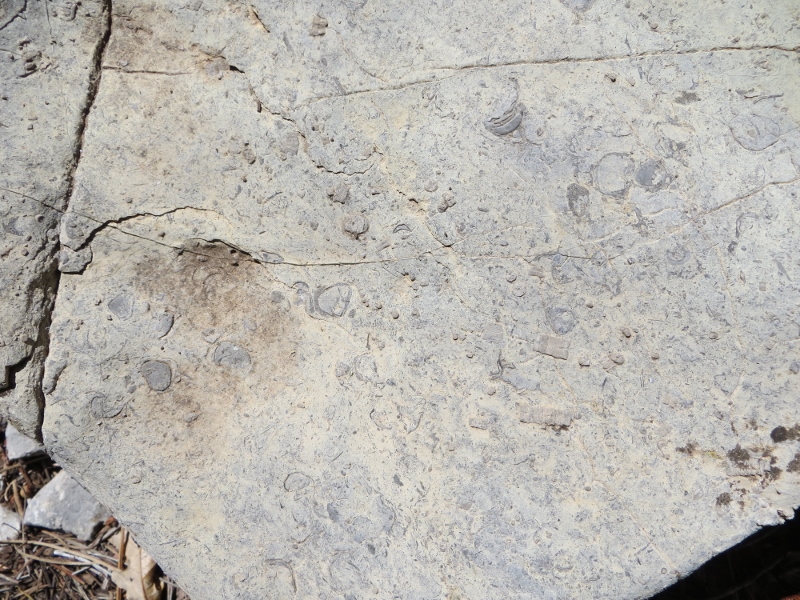 If you take a closer look at the limestone, you might see fossils such as the many fossils in this rock.

In addition to seeing fossils in the limestone, we saw many different types of flowers along the way. If we had been keeping count, I am sure that there were well over twenty if not thirty different types of wildflowers. Here is just a glimpse of what we saw. 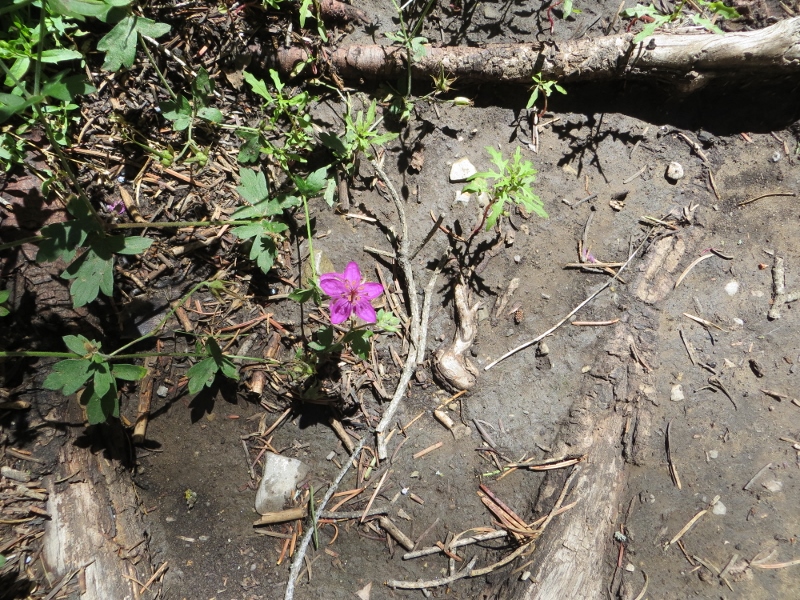 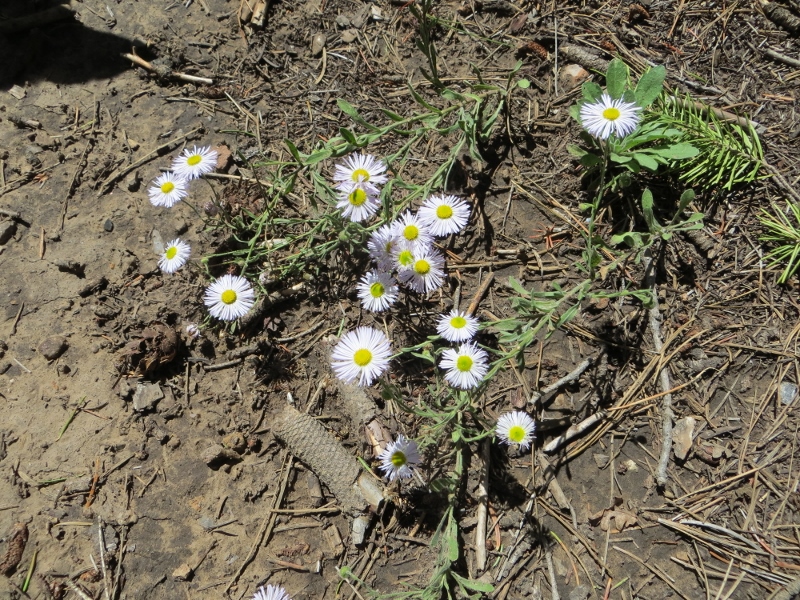 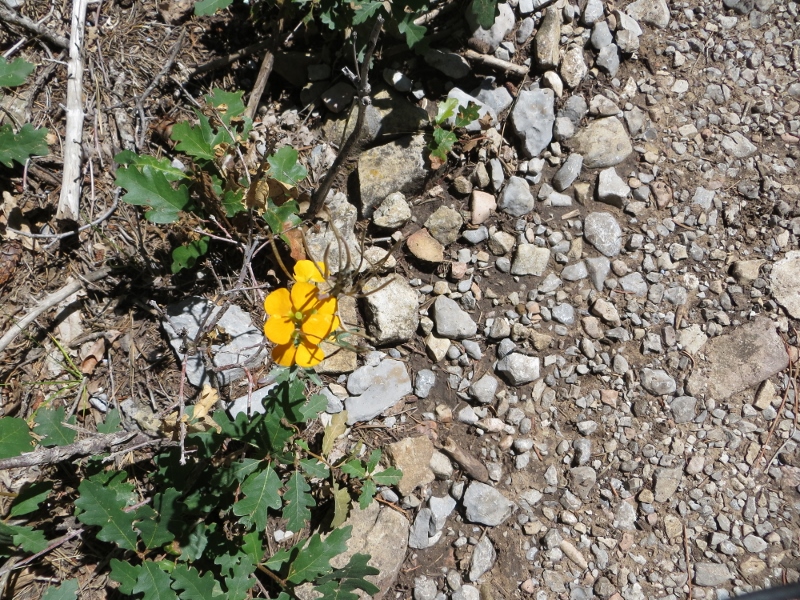 We also saw many variations of mushrooms. 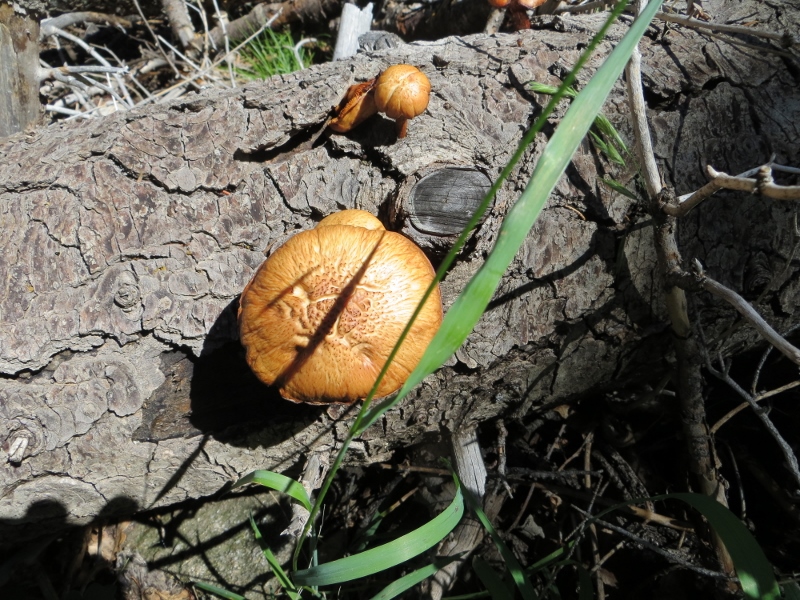 The trees too were worth looking at as many of them had great textures. 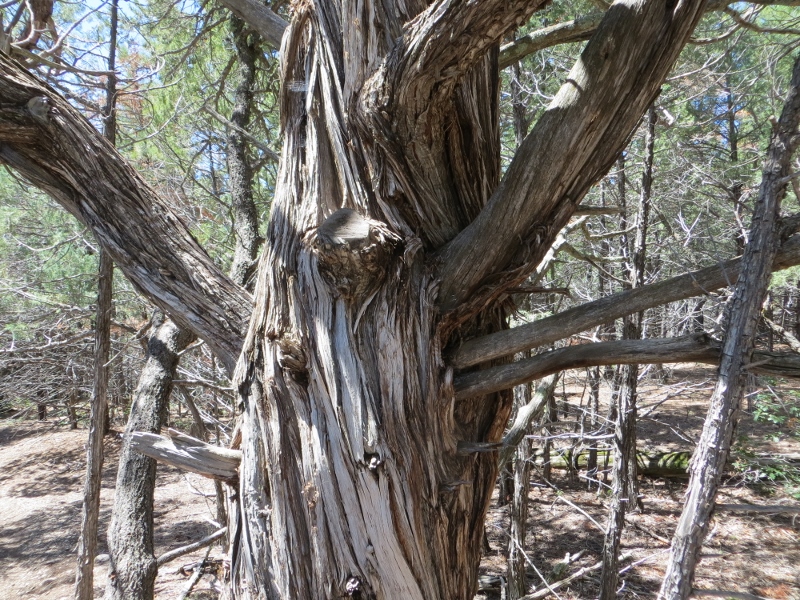 In a few places where the trees opened up, there were great views looking out beyond the mountains. 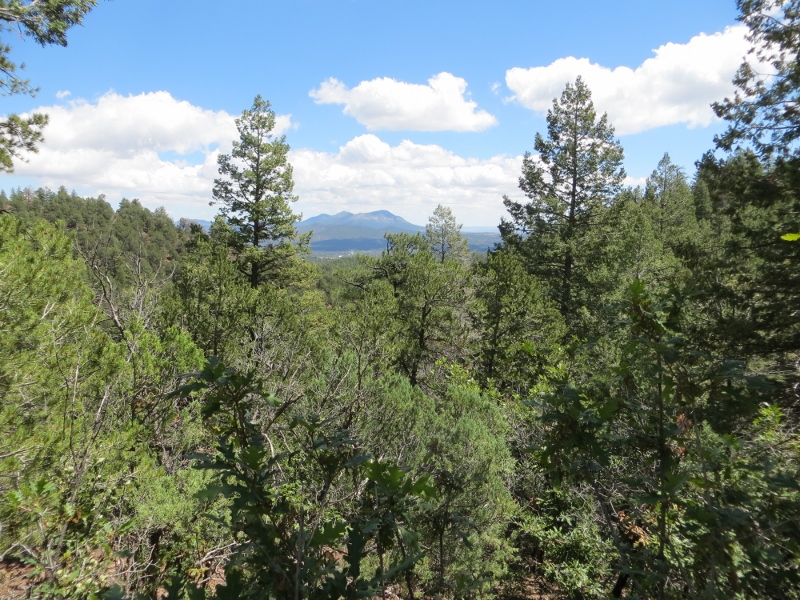 We finally did reach the thong tree, and it turns out that it was the same tree that I had seen before. It’s nice to know now what it is and why it is there. 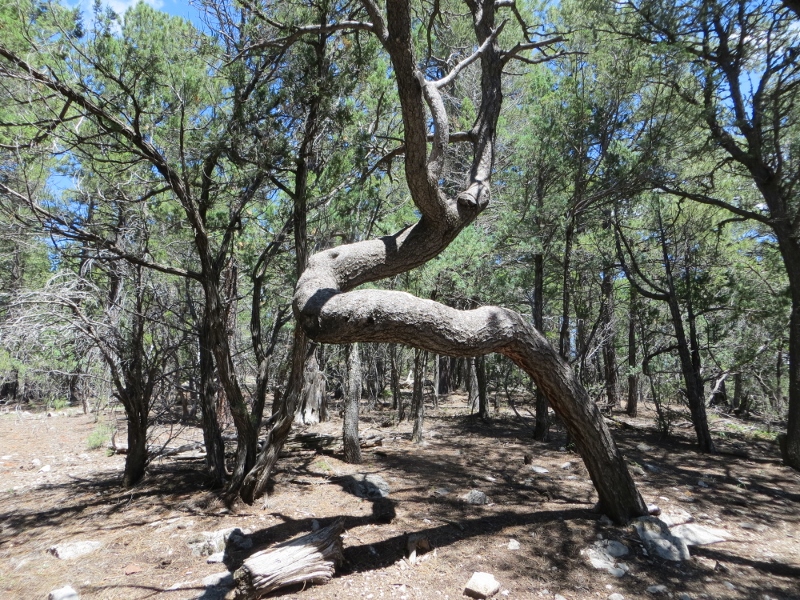 The bend in the tree is pointing to the spring just down the slope.

It’s also nice to know this part of the Faulty Trail route was a travel corridor long before it became the Faulty Trail. As a bonus, we ran into some Alligator Juniper close to the thong tree. 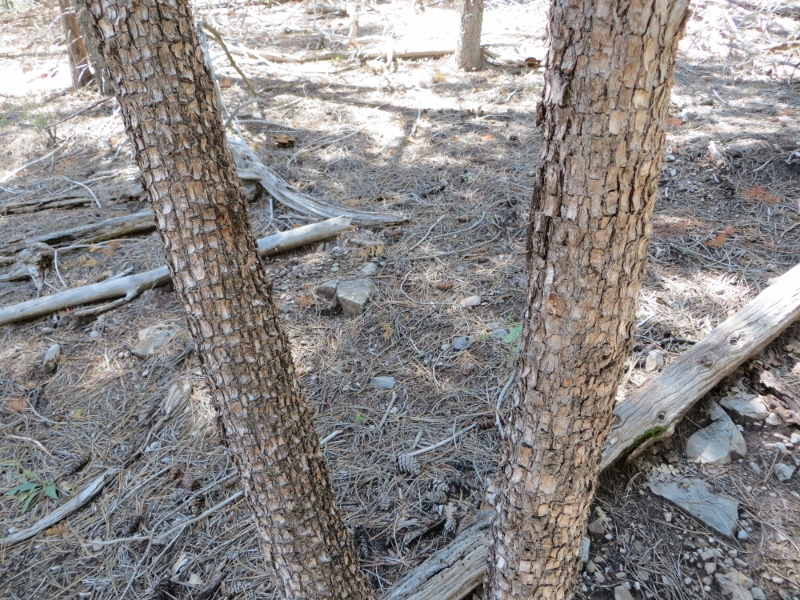 We then headed down to the spring. The spring still held water, but it was very difficult to reach because of all the deadfall. Much of the deadfall is due to bark beetle infestation. During times of drought the trees do not have the strength to fight off the beetles. 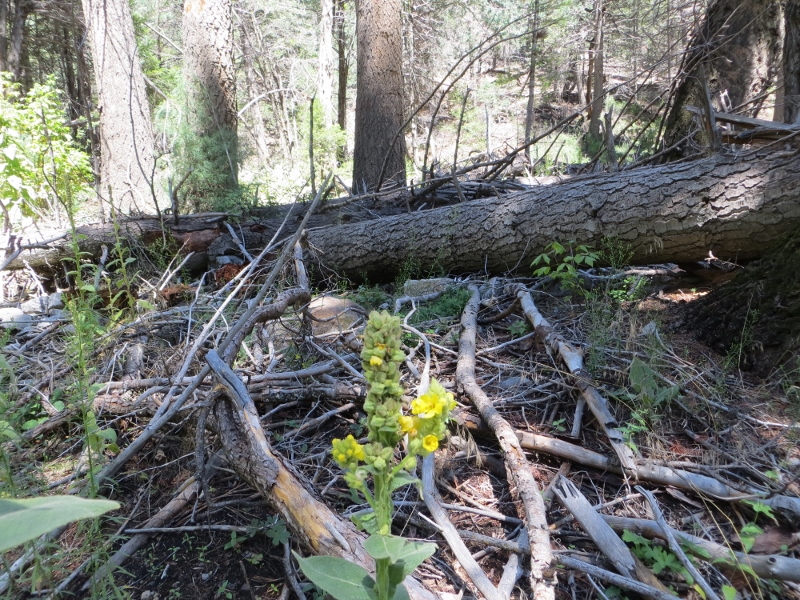 The travertine pools too were covered with deadfall. And even though there has been recent rain, many of the pools were dry. Even though many of them were dry, you can still imagine what they must look like when full of water. 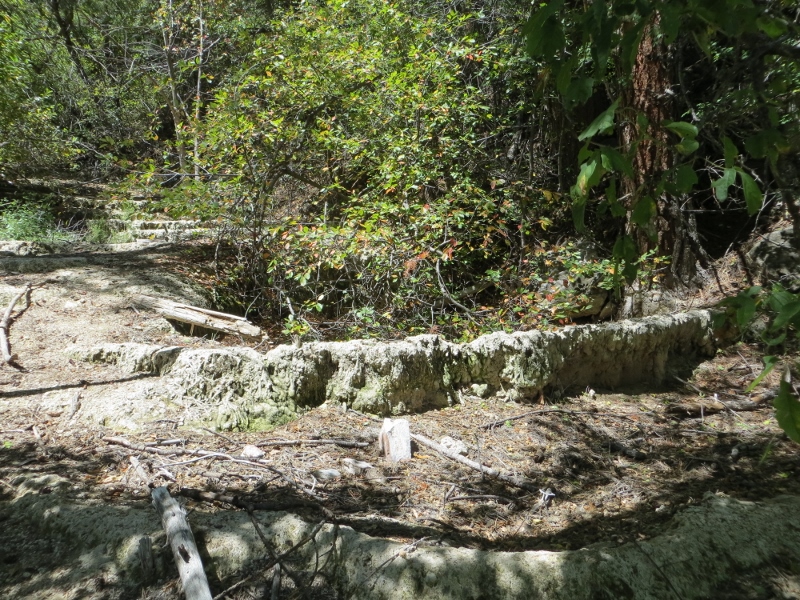 If you look upstream through the trees, you can see several stair steps of dried pools.

When the rains come back in sufficient amount to re-water the pools, it would be nice if enough volunteers could get together to clear away the deadfall. With water in the pools and a comfortable place to sit, this could become an extremely peaceful place to spend the better of the day watching water striders skim across the pools. It would be amazing.

To wrap up the day, we spotted a medallion tree on our way back to the trailhead. 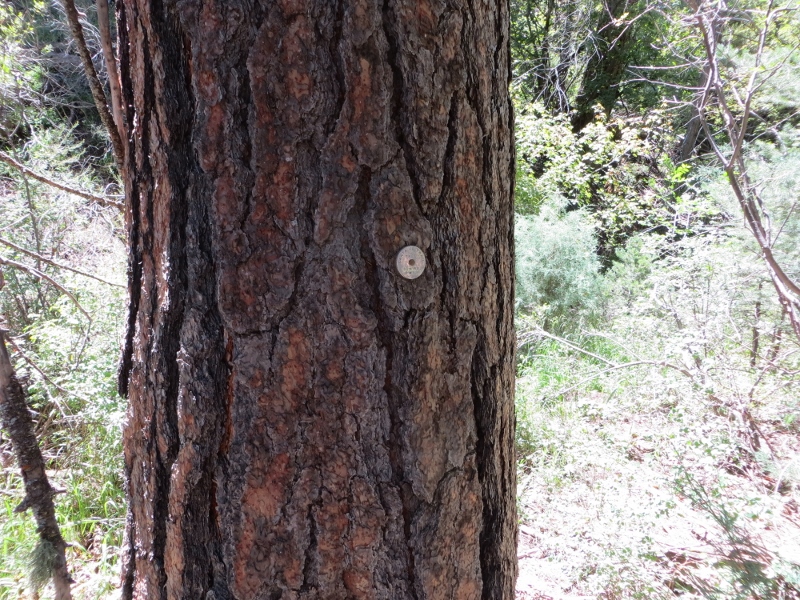 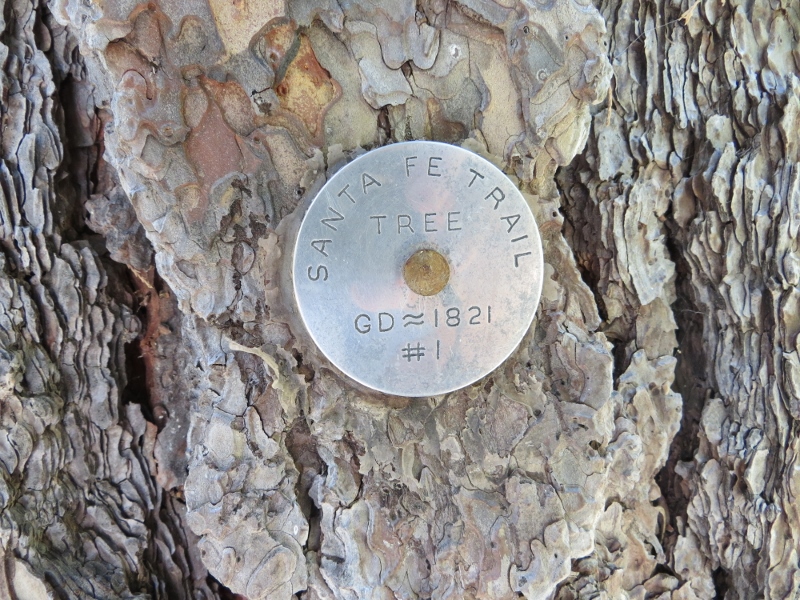 A person who has chosen to remain anonymous has made a hobby of taking core samples from very large trees in the Sandia Mountains to determine when they germinated by counting the rings. That same person then mounts a medallion on the tree to identify its year of germination and something significant that happened during that year. In the case of this tree, 1821 and the Santa Fe Trail. The “Stamp Act” medallion tree is mentioned in the book The Gentle Art of Wandering.

As I hope this post shows, any walk, no matter where you go, can be special. I hope you enjoy your walks as much as I have enjoyed mine.