The Kilbourne Hole is a huge 1 ¾ mile by 1 ¼ mile crater in the Chihuahuan Desert west of Las Cruces, New Mexico and El Paso, Texas that is over 300 feet deep. It is not a meteor impact crater; it is a maar volcano.

A maar volcano is like a huge volcanic burp. With a maar volcano, magma flowing to the surface did not reach the top to create a cinder cone or lava flow. Instead the magma flow became blocked and the available ground water then became super-heated. The resulting steam pressure eventually became so great that it blew off the covering mantle and left a huge flat-floor crater.

Can you imagine what the explosion must have been like?

Here’s how the Kilbourne Hole looks on Google Earth. 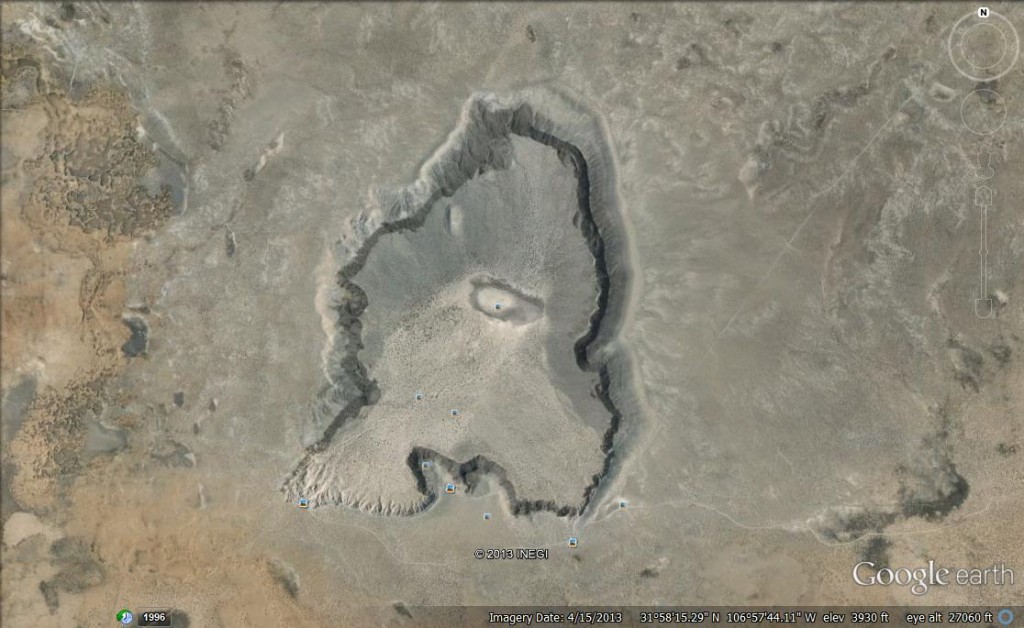 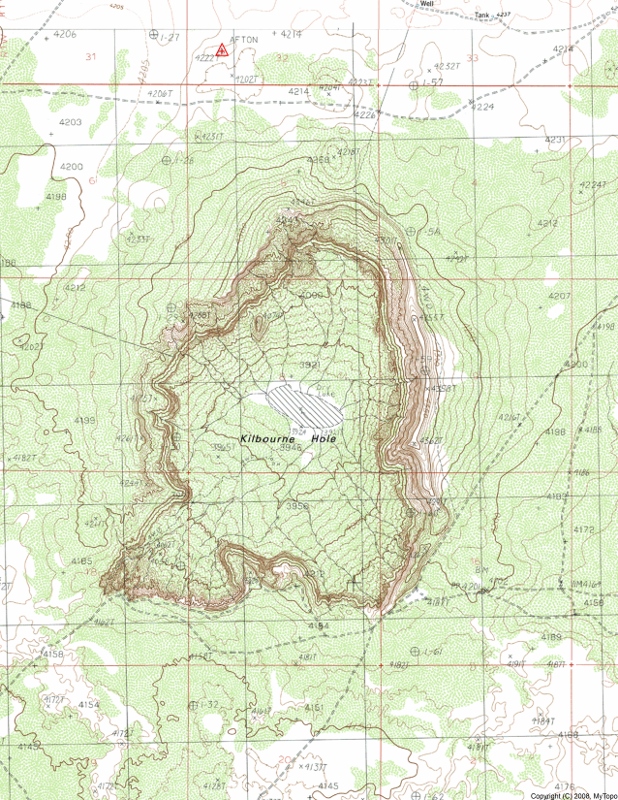 An here’s how it looks like on a topo map.

I first learned of the Kilbourne Hole when I read about it a few years ago in the book The Mountains of New Mexico by Bob Julyan. If you are interested in wandering, you might want to have some books that describe features of the area where you live in your library. They are good sources for wandering ideas, and as mentioned in the opening pages of The Gentle Art of Wandering, if you don’t have a wandering idea you won’t get out and wander.

The dogs and I visited the Kilbourne Hole soon after reading the mountain book. We even found some peridot while we were there. 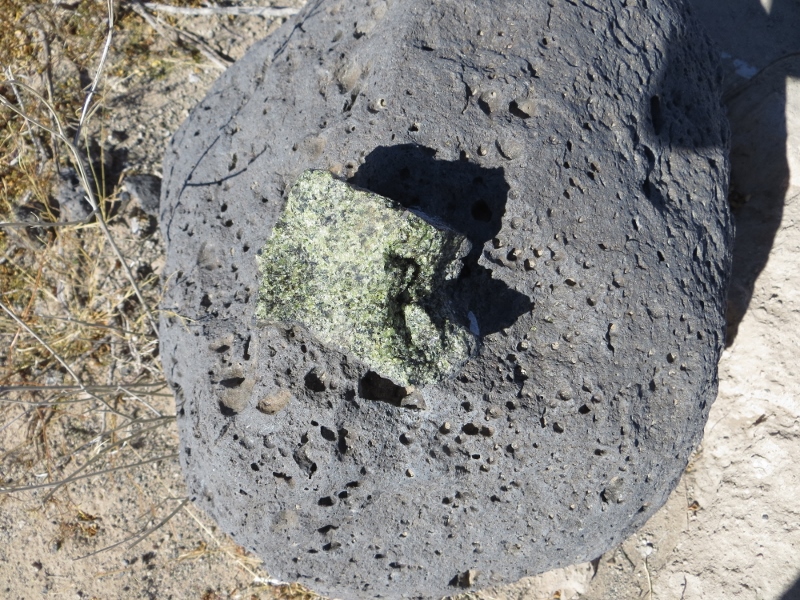 Those small green crystals are peridot

Sometime after that first visit to the Kilbourne Hole I read about a hike circumnavigating the Kilbourne Hole in Day Hikes and Nature Walks in the Las Cruces – El Paso Area by Greg Magee and thought that that it would make for a great hike. The day hike book does a fine job of describing the hike and giving you directions on how to get there. Surprisingly it did not mention peridot. If this book were your only source of information, you wouldn’t know to look for peridot while at the Kilbourne Hole. So if you plan to check out an area, it might make sense to consult multiple sources for ideas and information.

With the recent cold weather in Albuquerque, the dogs and I decided that now was the time to take a road trip down south and finally make the eight-mile hike around the Kilbourne Hole. With 100 degree plus temperatures in the summer, the Kilbourne Hole is a perfect place for a winter hike.

And what a perfect December day it was for hike and a day in the Chihuahuan Desert. It was cool, in the mid-50s; it was sunny, not a cloud in the sky; and it was quiet. The only sounds were the occasional airplane and the distant wailing horn and rumble of freight trains on the Union Pacific main line from El Paso to Los Angeles about eight miles away.

Although there were plenty of spent shells and debris from people shooting guns and tracks in the sand from ATVs, we were the only ones there. We had this huge beautiful hole all to ourselves on this wonderful weekend day. And we did not see anyone else until close to the end of our hike. 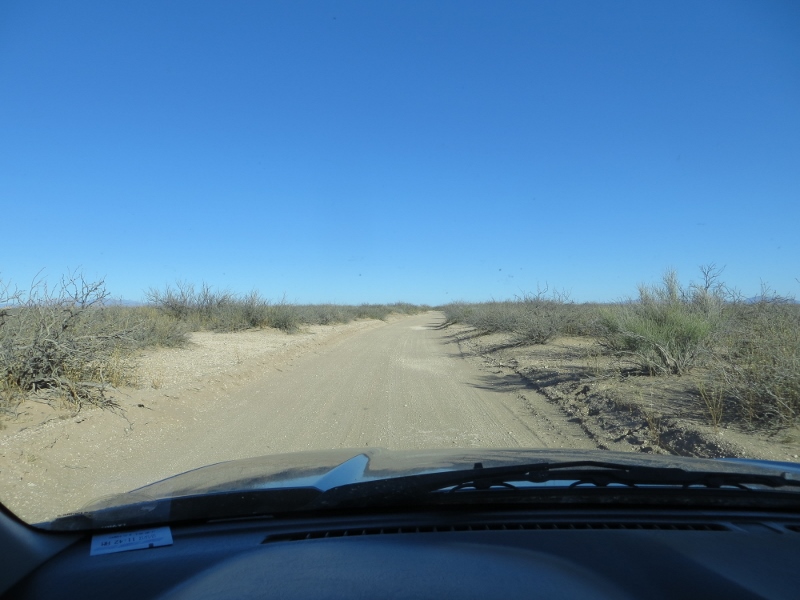 Driving through the Chihuahuan Desert to the Kilbourne Hole 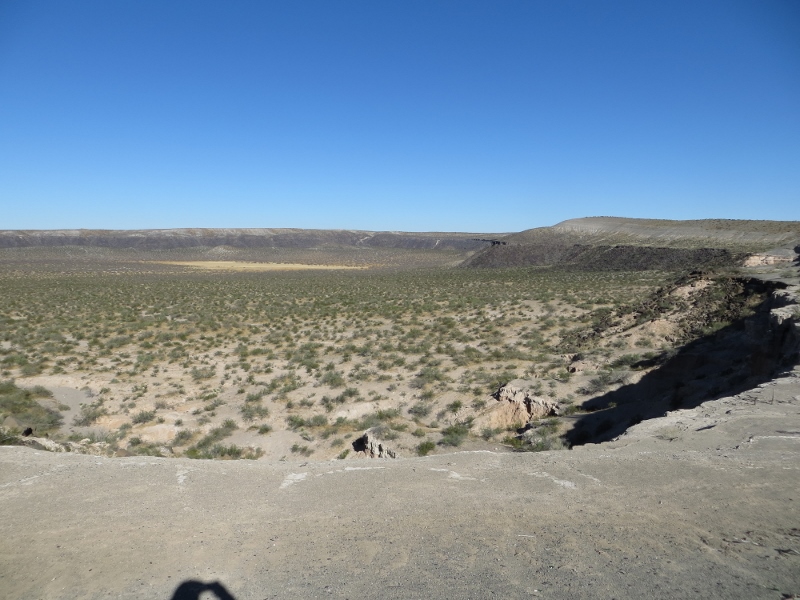 Starting our walk at the south end of the Kilbourne Hole; it’s 1 3/4 miles to the other side and 300 feet down to the bottom. 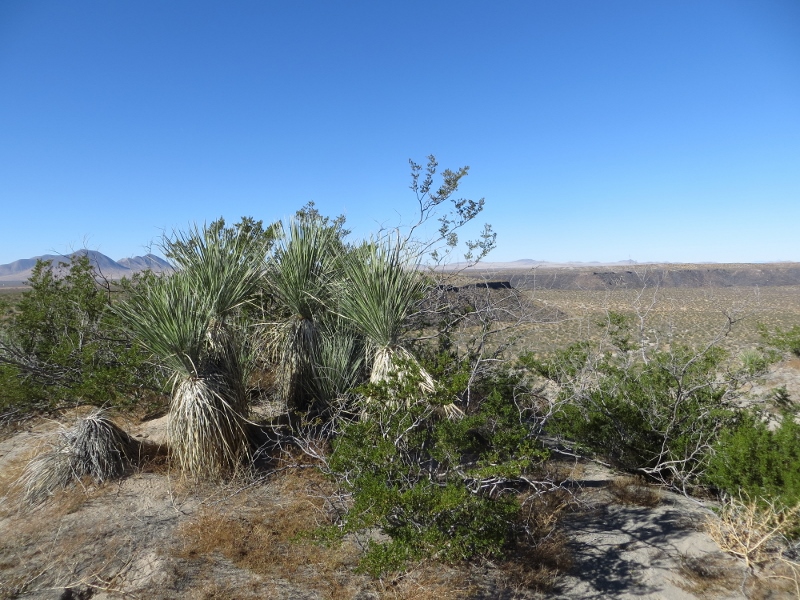 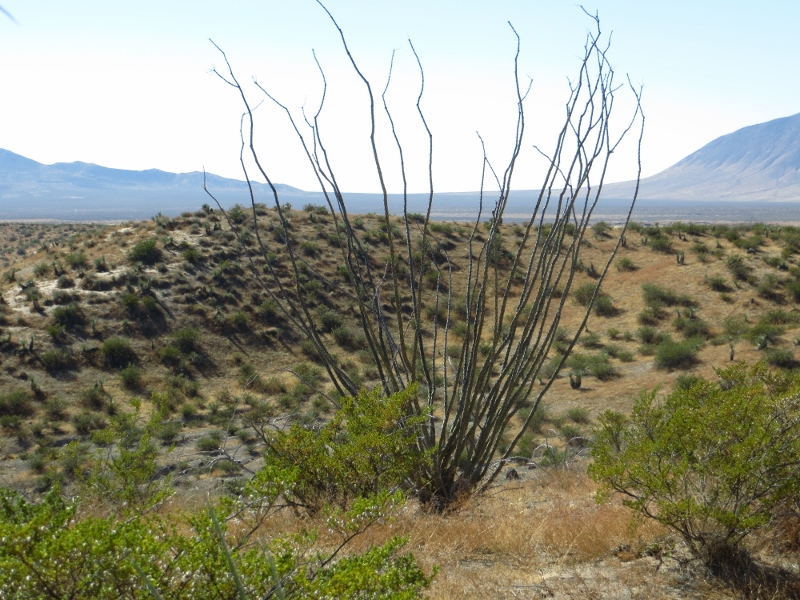 You’ll even see the occasional ocotillo. 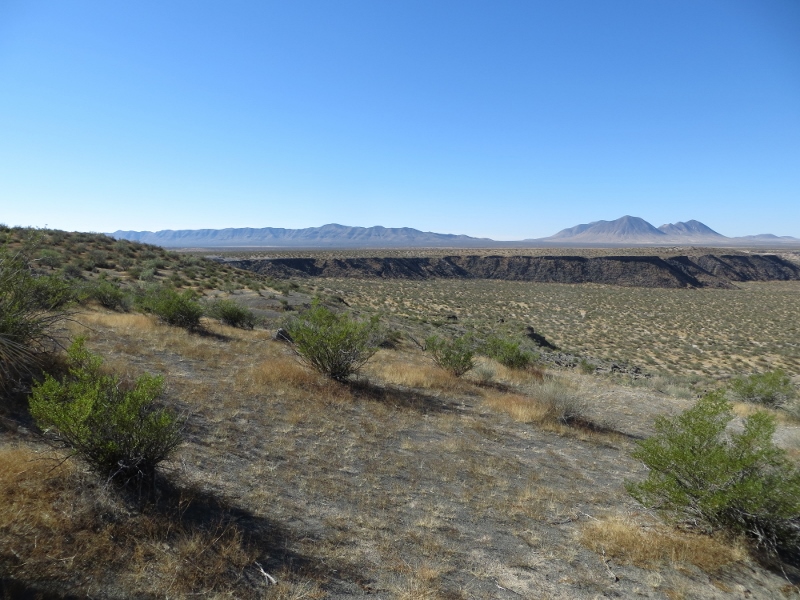 As you look around you can see that you are truly in the middle of nowhere. 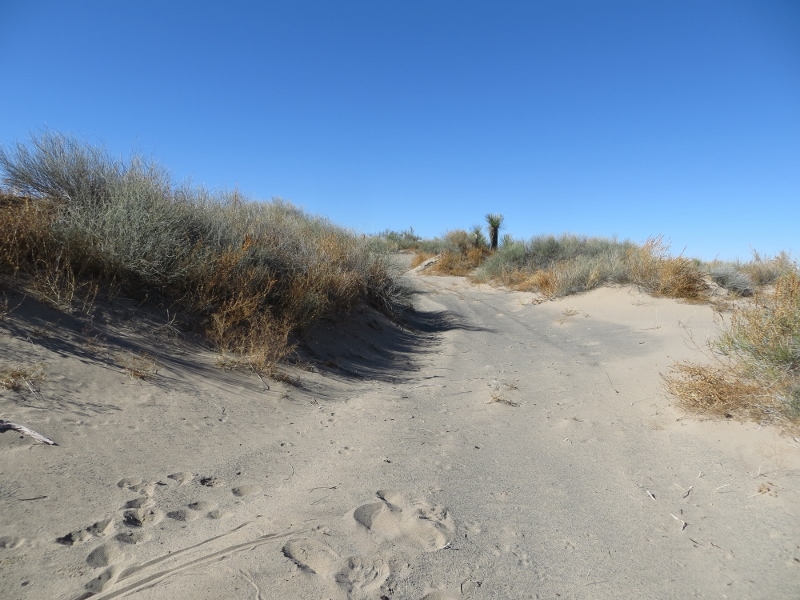 There is a two-track that circles the Kilbourne Hole, but I don’t think you would want to drive it. Also when you’re in the sand you won’t be seeing any peridot. 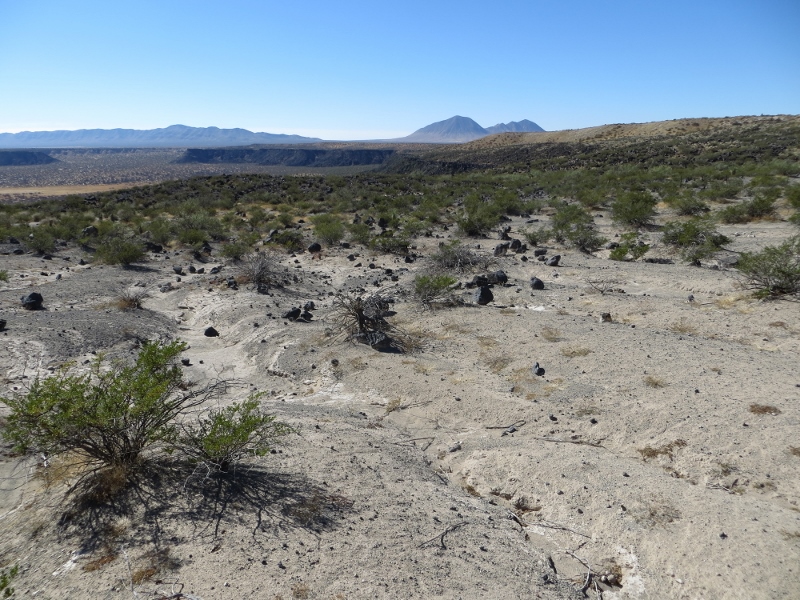 If you want to find peridot, you need to walk where the basalt rocks are scattered. 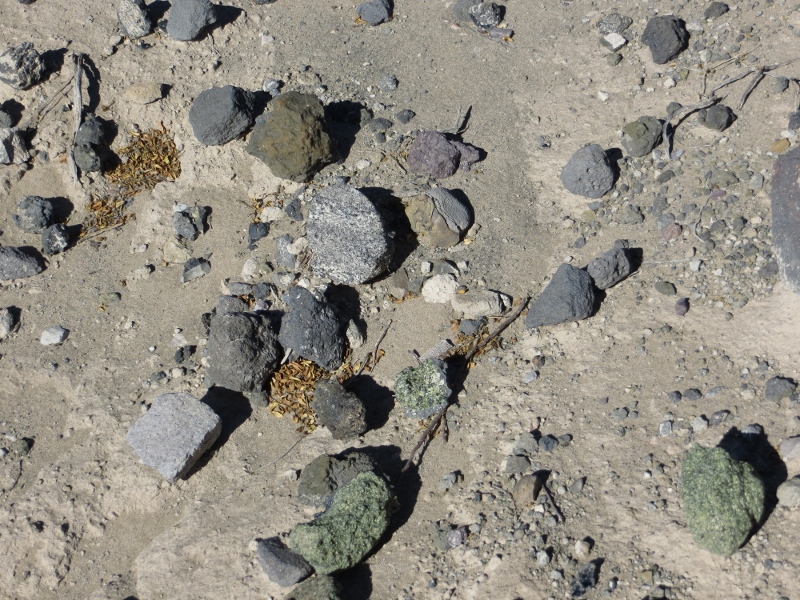 If you look around, you’ll see peridot everywhere! 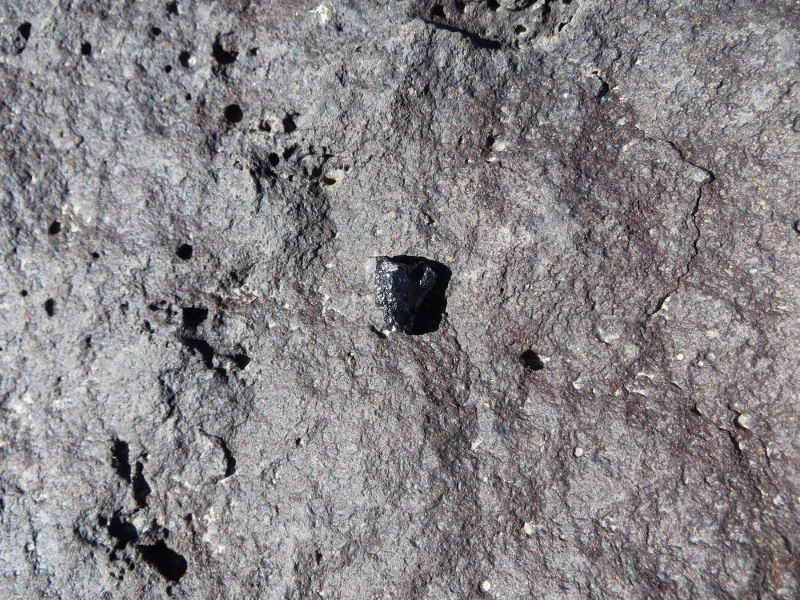 You might even find a small piece of obsidian! 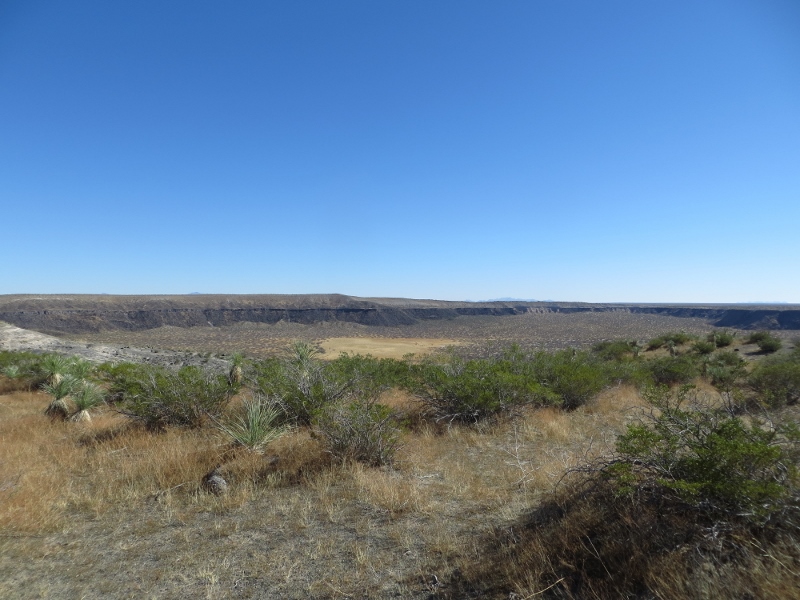 Here’s what the Kilbourne Hole looks like from the other side. 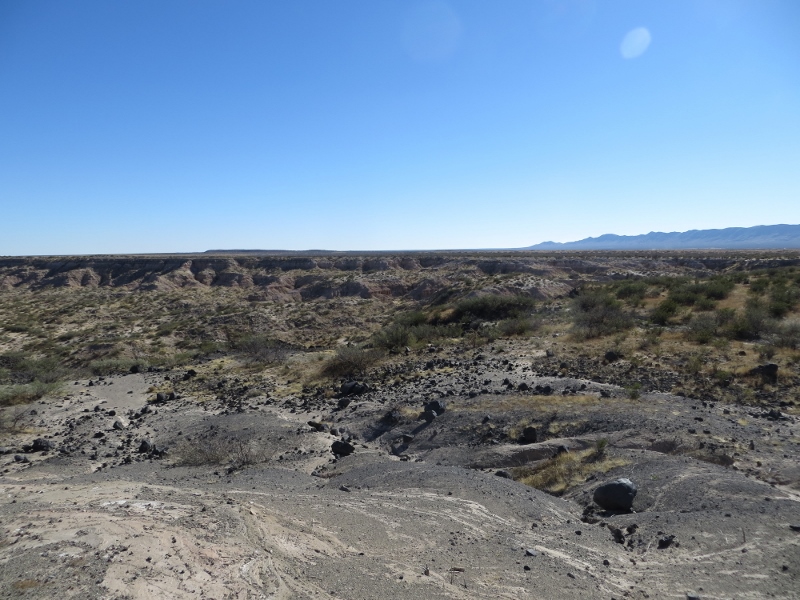 You’ll find likely areas for peridot all around the Kilbourne Hole. 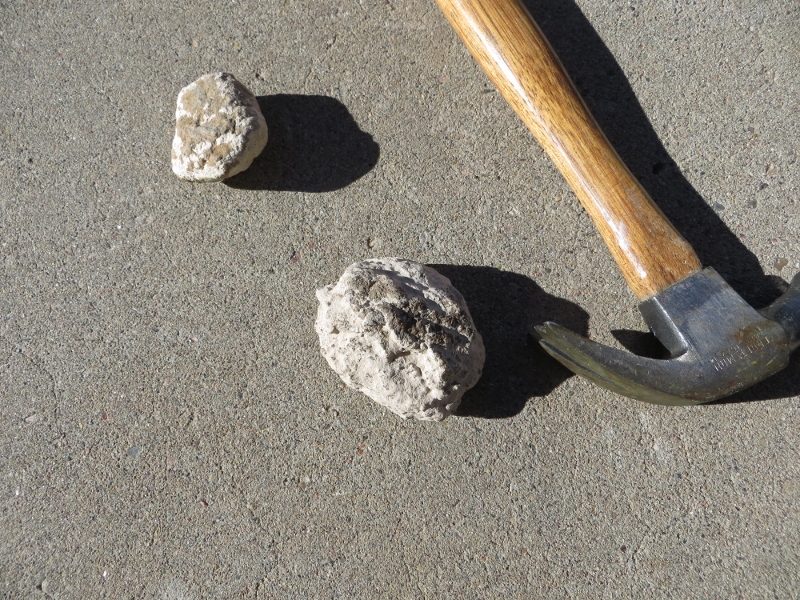 I even picked up a couple of rocks to see if they would have peridot crystals inside them. 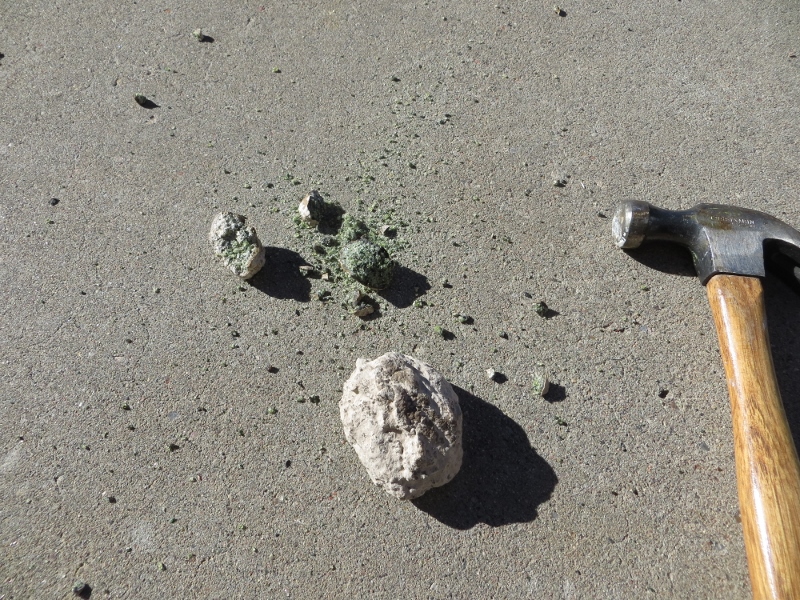 The smaller rock almost disintegrated when I cracked it with a hammer. It was loaded with peridot crystals. 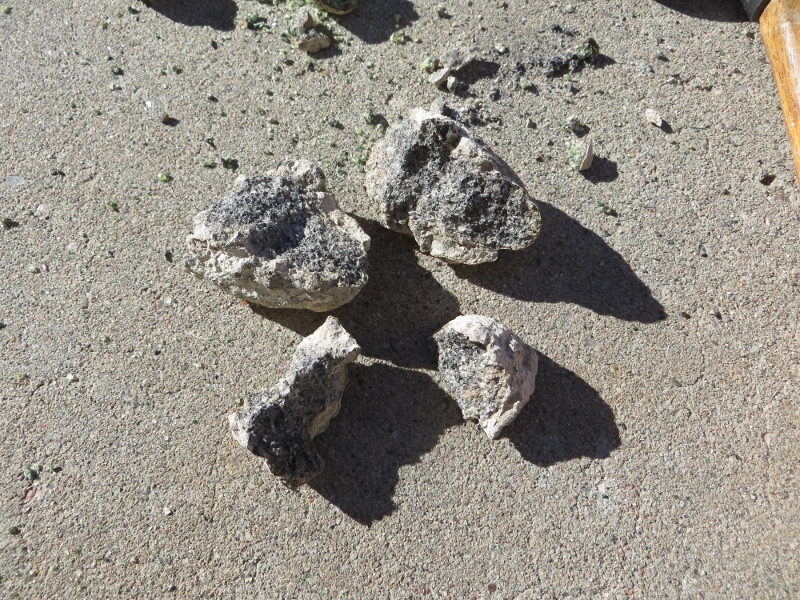 The second rock didn’t disintegrate as much when I cracked it. Rather than peridot, it had small obsidian crystals.

No matter how you measure it, it was a great day: perfect weather, a great hike, and figuring out where to find peridot was a special bonus. It’s those little add-ons that make wandering so special and more than a hike!