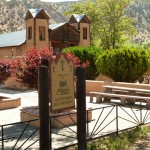 The Santuario de Chimayo in northern New Mexico is an almost obligatory day trip stop for most Santa Fe, New Mexico visitors. And for good reason, it’s less than 30 miles away and on the high road to Taos. It is considered a special place by many people. Like Tome Hill south of Albuquerque, it is also a Good Friday pilgrimage destination.

The drive to Chimayo is spectacular. The road passes through incredible tan high desert foot hills and mesas dotted with juniper. For the first time visitor, the landscape is awe inspiring. When you reach the crest of a hill just south of town you catch your first glimpse of the community of Chimayo tucked into the valley of a mountain stream. It is an oasis in the desert, almost like a Shangri-La.

The Santuario is the main attraction and is famous for its healing dirt. Even if you don’t believe in healing dirt, it is worth checking out. The building is typical New Mexico adobe pretty and the chapel inside is like stepping into another Century in a different country. The painted alter is like an elaborate folk project that includes hand carved wooden statues. The chapel is almost dark as it is lit only with candles. Most visitors walk through the chapel, grab some healing dirt, check out the stack of crutches from those who were healed, and then head on out to buy a locally made rug up the road or go on to Taos. 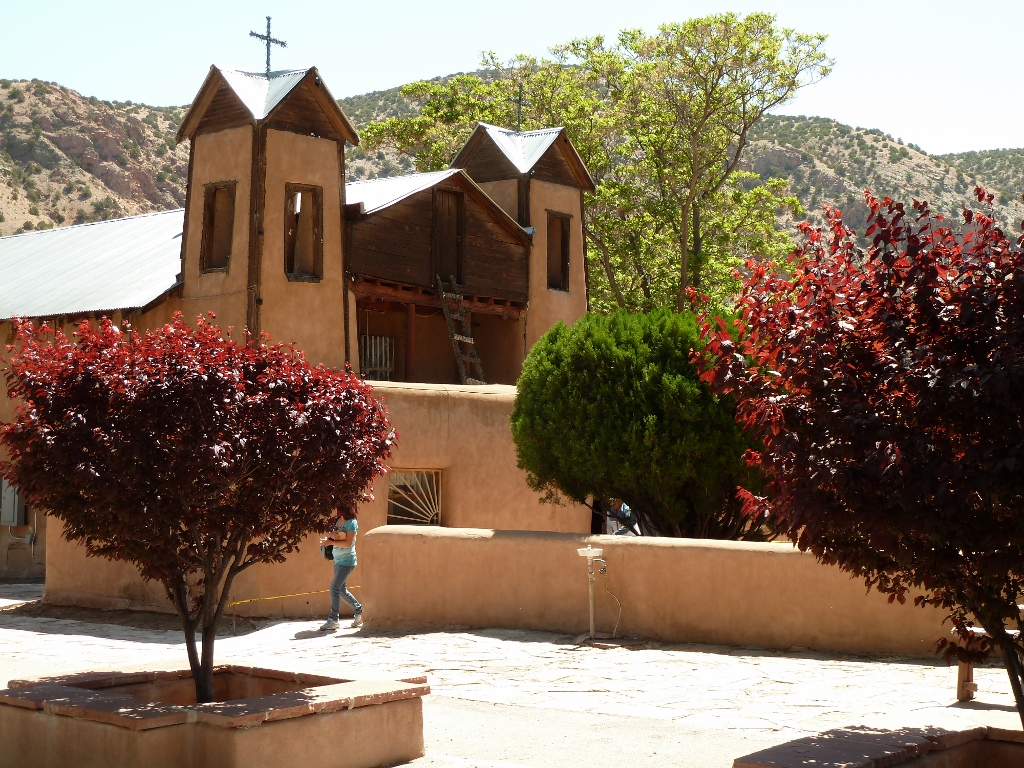 Our obligatory photo of the Santuario

Today, the dogs and I decided to take a walk and wander around. We took an obligatory picture of the Santuario and then started walking on the road west from the Santuario. When we crossed the main road, we came upon an old Hispanic cemetery. 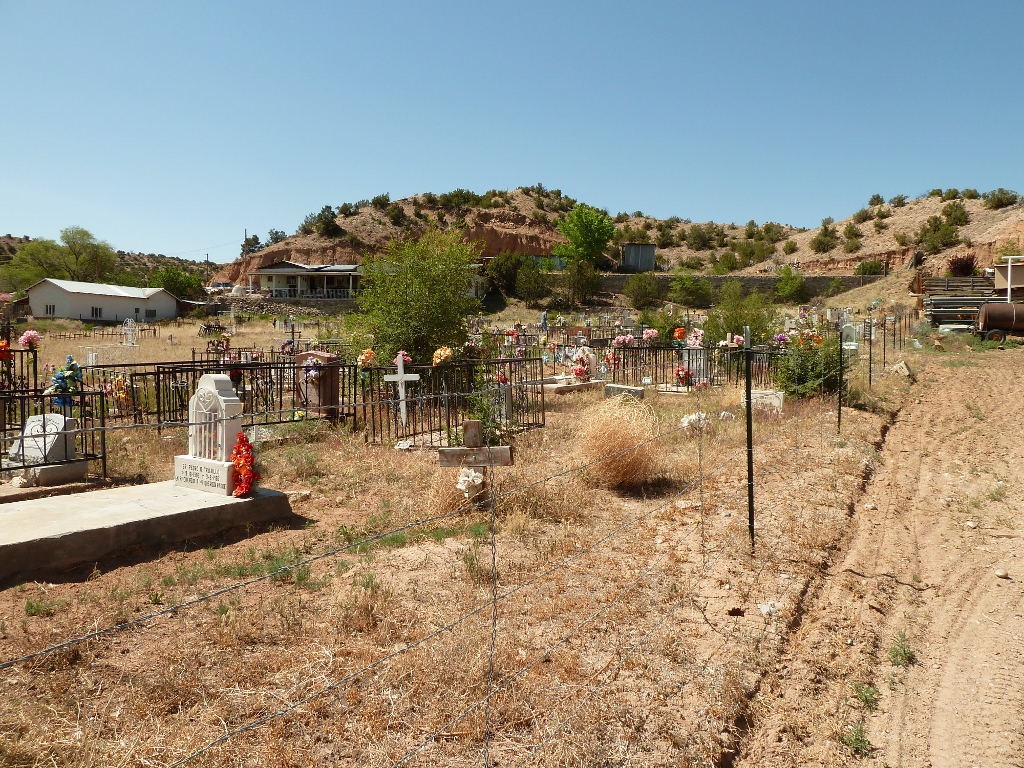 We then followed a dirt road up a hill and ran into another cemetery. 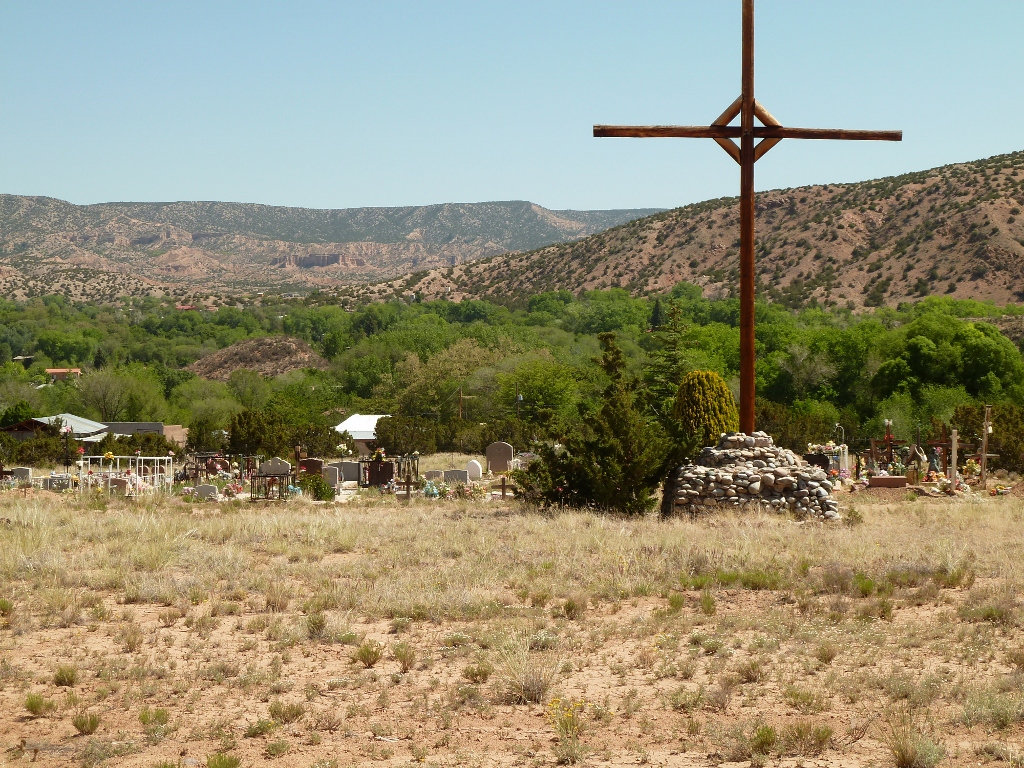 From there we could see a cross on top of hill and followed a series of footpaths to get there. 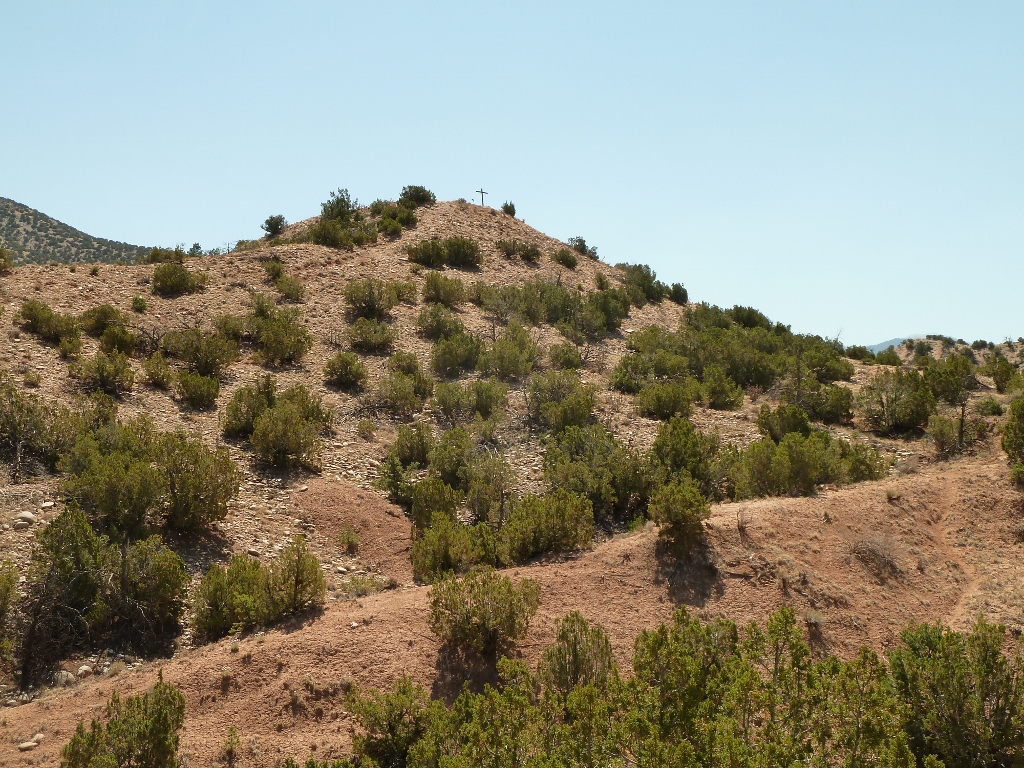 The path took us down one hill to cross an arroyo and then finally led us to the top. From there we could look down on the community and the Santuario. As we scanned the horizon to the west we saw what looked like to be another chapel in the distance. It looked like it could only be reached by a footpath. 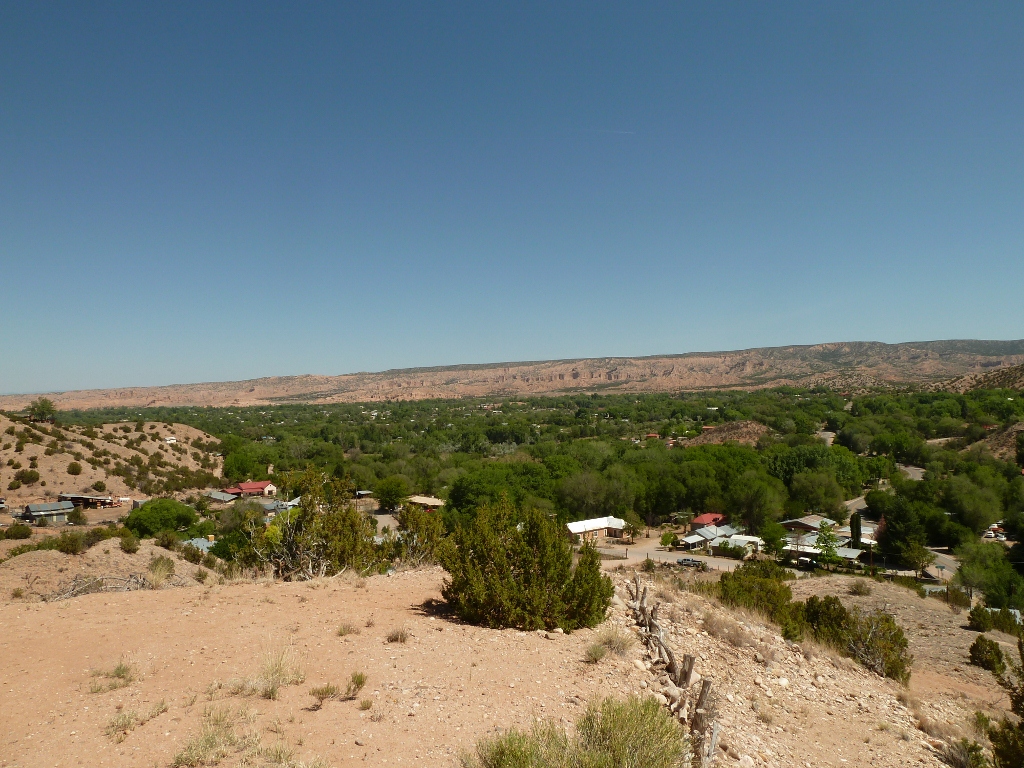 The chapel is the white building sitting alone a hill to the left.

To get there we followed a different footpath than the one we took up to get to the bottom of the hill that we were on. We then followed a road until we got to the footpath that would lead us to the chapel. 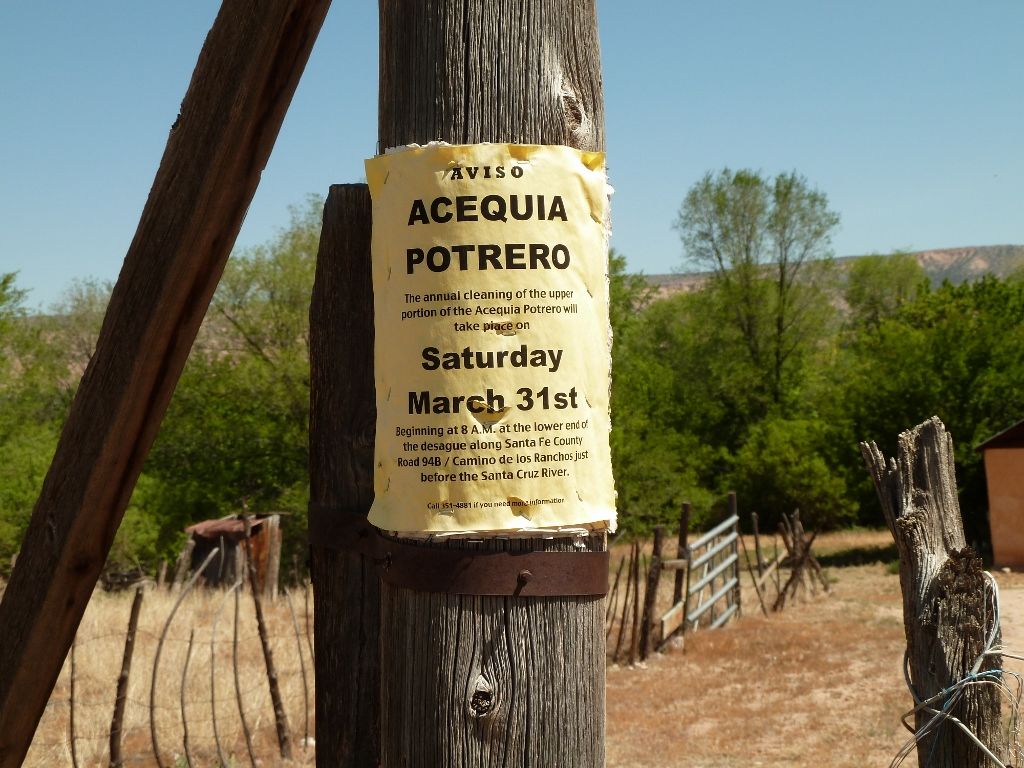 We saw this notice for an annual acequia cleaning along the road. The acequias (irrigation ditches) have been part of the community for hundreds of years. 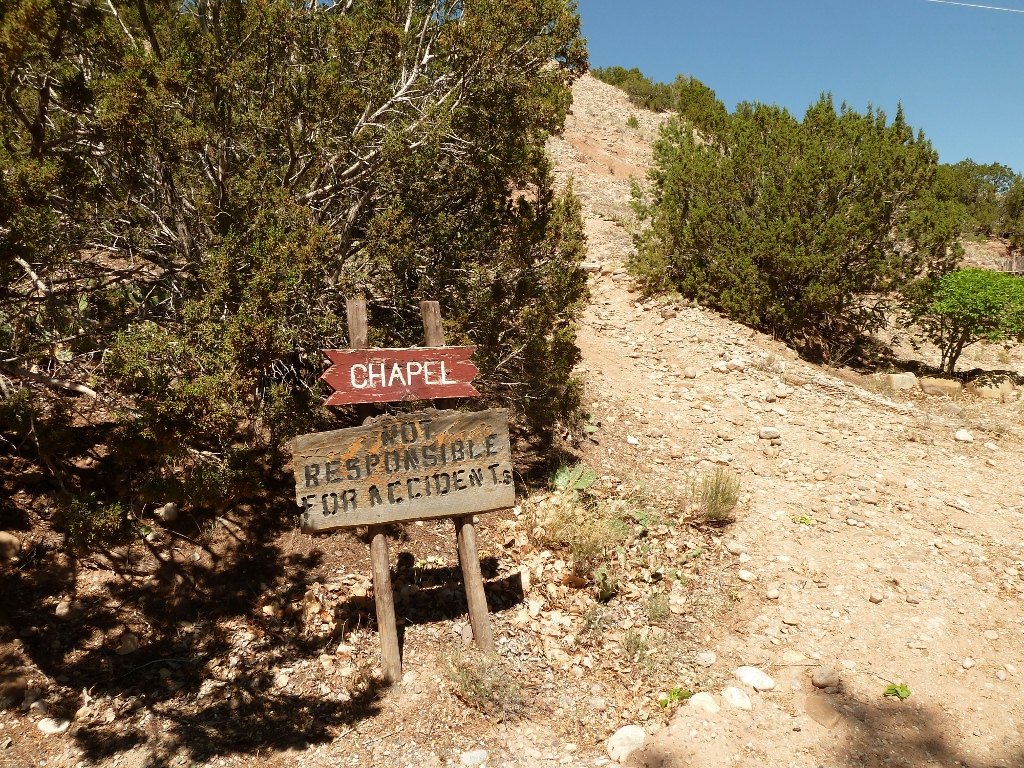 The path to the chapel starts here. 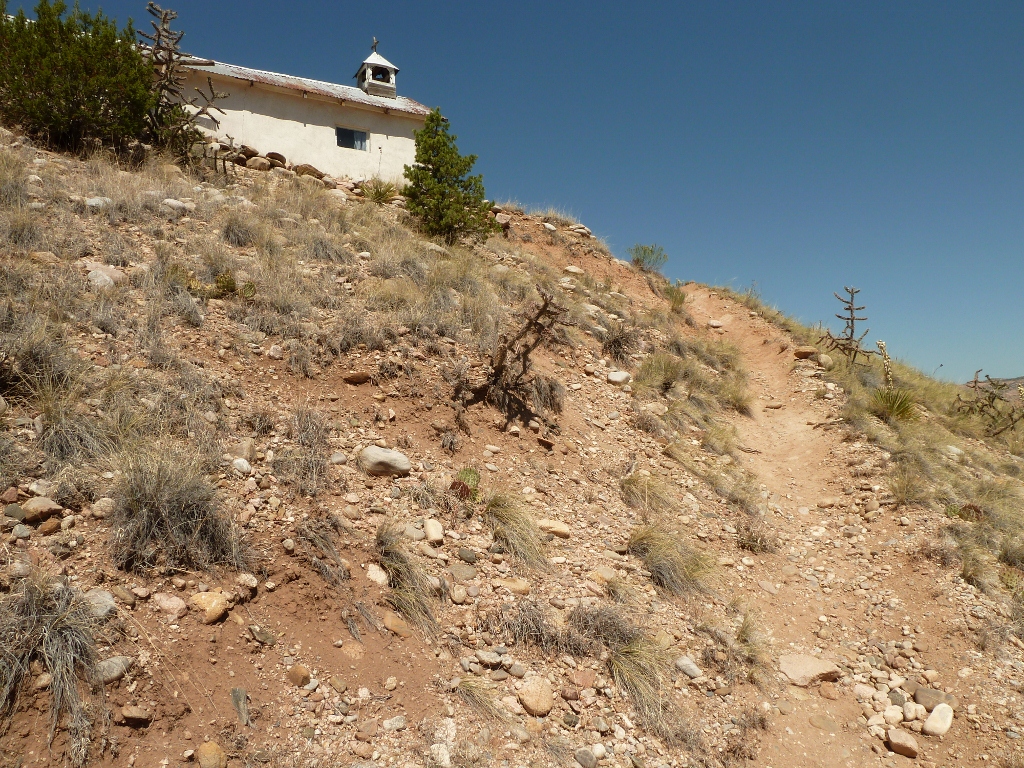 On the way up

When we reached the top, we had a great view of the community and to our surprise found that the door to the chapel was unlocked. 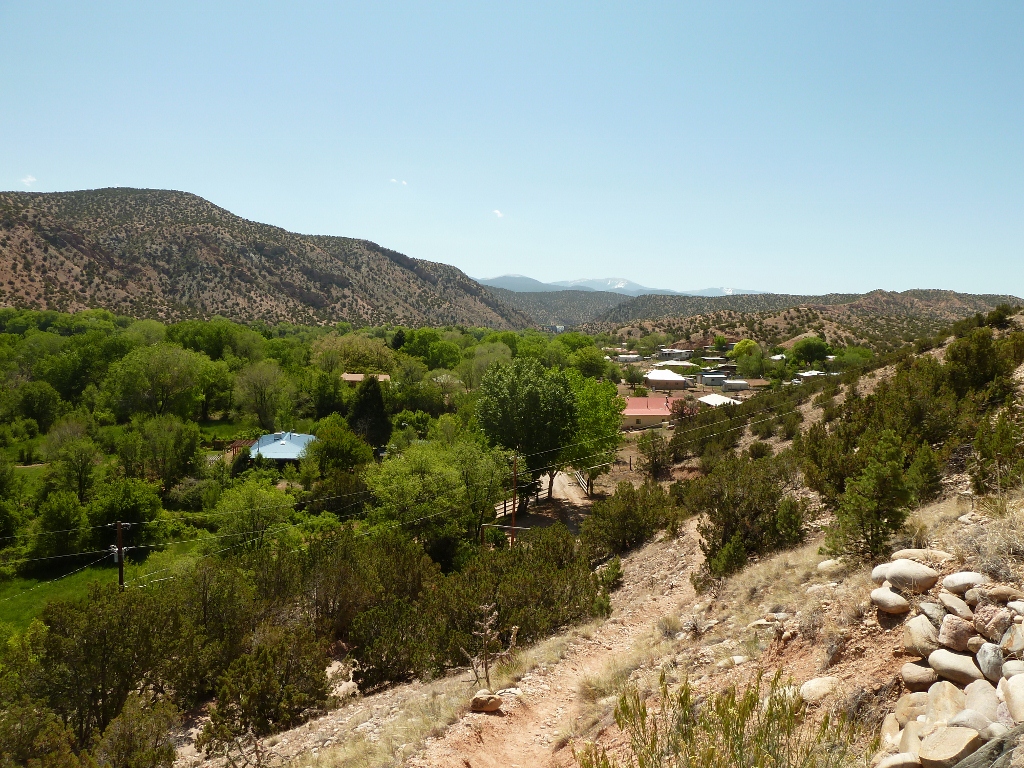 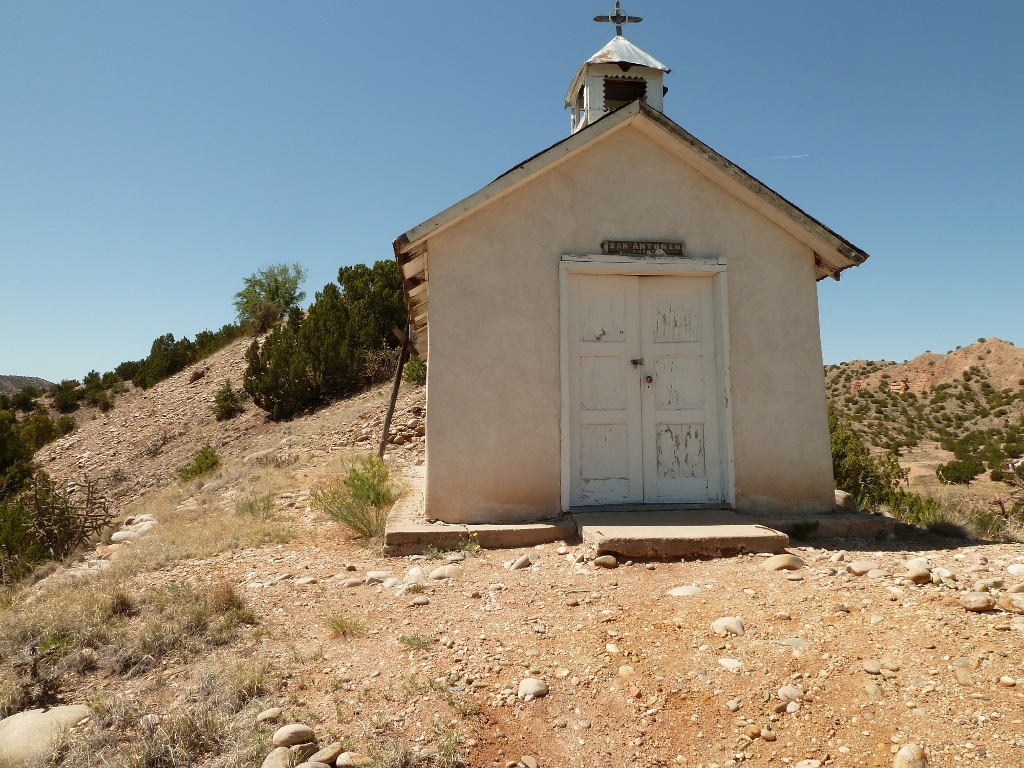 I left the dogs outside and went inside to check it out. It was very peaceful and quaint. In some ways it was better than the Santuario: it was off the beaten path, a bit more funkier, more private, and totally unexpected. 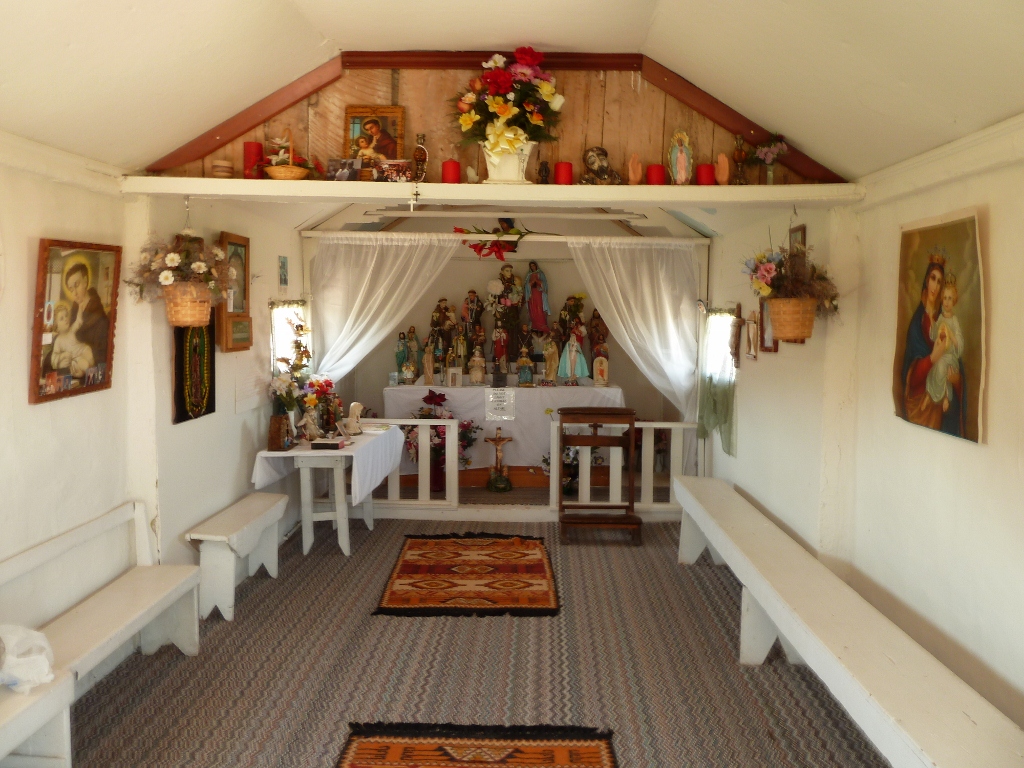 It’s almost like a playhouse for meditation on the inside.

This is the process of wandering. You start by heading out and to see what you can see and then let what you see tell you where to go next. Finding footpaths even makes it better; a footpath, like a public stairway, can only be traveled on by foot. They both get you out of the car and give you a different way to explore a community.

There is always something interesting to find in Chimayo. On a previous visit to Chimayo, I was sitting in the plaza with another person. We were waiting for our wives to finish up in the bathroom. As we were sitting, a man sat down next to us and started telling us about the all the angels he had seen at the Santuario. He went on to say that the Santuario is located on a vortex; it provides the energy to heal people.

He continued to tell us that he comes to the Santuario every day to gather healing dirt to take to the sick in his community. He added that less than a half mile away is another vortex that energizes the water coming out of a small spring. When our wives returned, he took us there. And sure enough, tucked behind a cottonwood tree there was a small amount of water flowing between two rocks on the side of a hill. The immediate area was decorated like a small shrine. 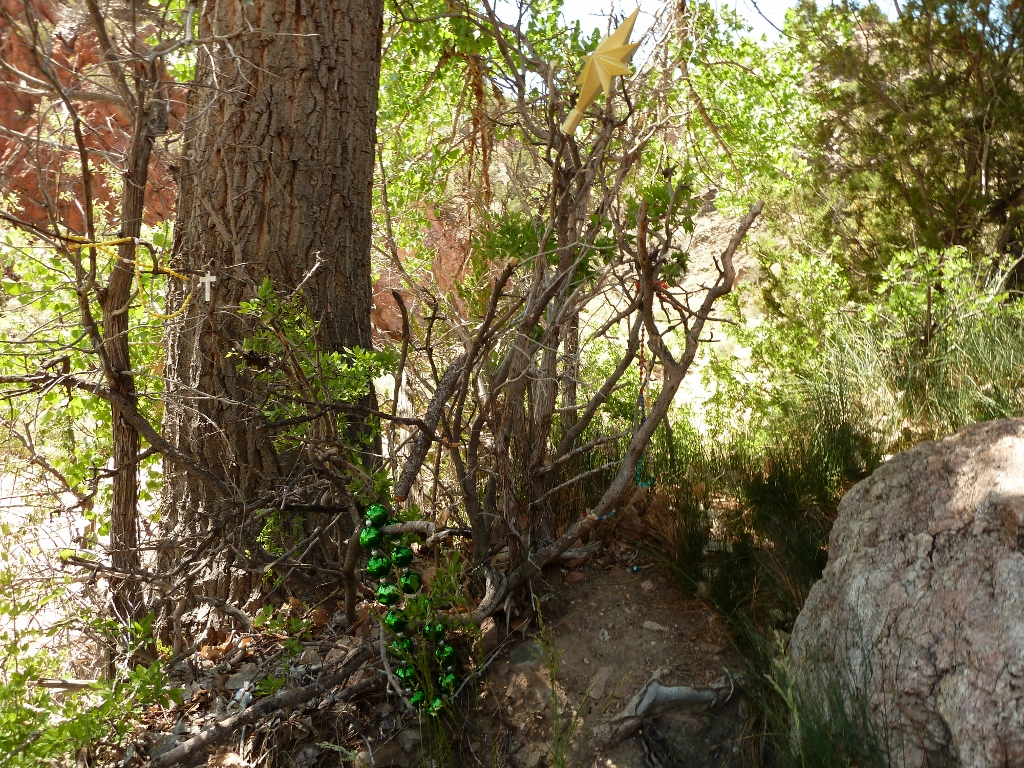 The water comes out from below the rock to your right. Look closely and you’ll see Christmas ornaments and other decorations making up a shrine.

When I got home after that visit, I checked a topo map to locate the spring. The spring was nowhere to be found on the map. It is something you’ll have to find, or in our case be taken there. I have been back to spring a few times since that first visit, and every time I return the shrines are a bit different, but the water still flows.

Whether you believe in the powers of the area or not, it is a fun place to visit and a great place to wander.