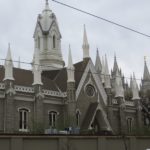 As we all know, there is a certain amount of sameness and little to give a location a sense of place throughout much of country, especially in those areas built after World War II. It’s almost as if you could be blindfolded and dropped almost anywhere and not have a clue as to where you were when the blindfold came off. But if you were dropped into a Mormon developed community you might notice a difference. 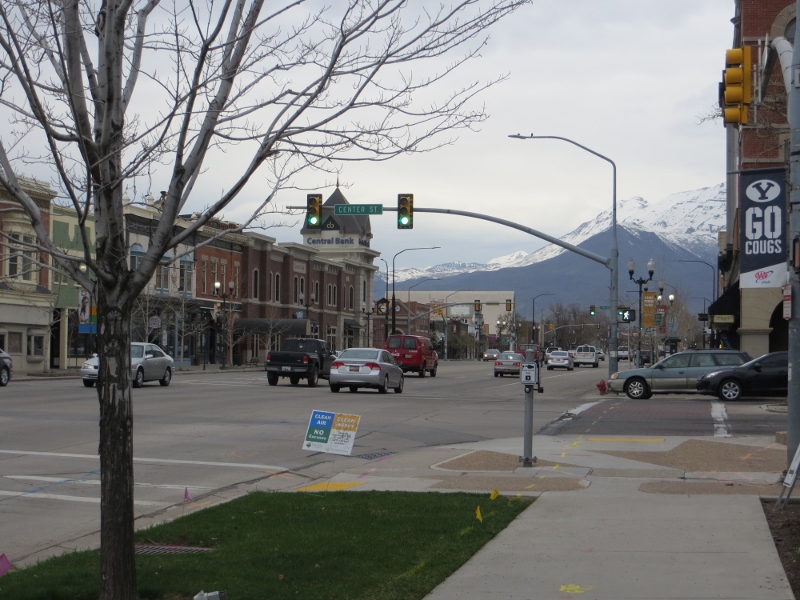 A wide street in Provo, Utah

This is no accident. Long before Brigham Young led the Mormons to Utah in 1847, Joseph Smith (the founder of the Mormon religion) described the ideal Mormon town in an 1833 document called the “Plat of Zion.” His vision was to establish agricultural communities with urban aspects.

His plan called for 132 foot wide streets and 660 foot long blocks. The streets would be wide enough to accommodate irrigation ditches and transportation. Building lots would be large enough for a garden. Houses would be oriented to avoid looking directly onto a neighbor’s home. He wanted his followers to live in a town environment to make educating children easier and for members to have access to cultural events and church activities. The agricultural fields would be just outside of town and still readily accessible to followers.

No Mormon community ever matched the Plat of Zion. But when the Mormons came to Utah, Brigham Young directed that their town (Salt Lake City) have 132 foot wide streets and 660 foot long blocks.

As the Mormon population grew, the church organized groups of colonists and sent them to unsettled areas to build new communities with similar if not exactly the same measurements. Eventually over 500 Mormon communities were established. (I have even seen the number of 712.) Mormon communities can be found in Utah, nearby states, and even in Canada and Mexico. Regardless of the exact lengths, the streets are all wide and the blocks are long and square.

There is nothing magical or mystical about a length of 132 or 660 feet. People of the 1830s and 1840s would have been very familiar with the use of a 66 foot surveyor’s chain (also called a Gunter’s chain) to measure and distribute land. 132 feet is two chains long while 660 feet is ten chains long.

British clergyman and mathematician Edmund Gunter developed the 66 foot long Gunter’s chain in 1620. Somehow he figured out that 66 feet was a logical length for a device to measure land. A 5280 foot long mile would equal 80 chains and a 43,560 square foot acre would equal ten square chains. A Salt Lake City block measuring 10 chains by 10 chains would then be ten acres.

Earlier this year my dog Petey and I made a trip to Utah to take a closer look at the Mormon landscape. 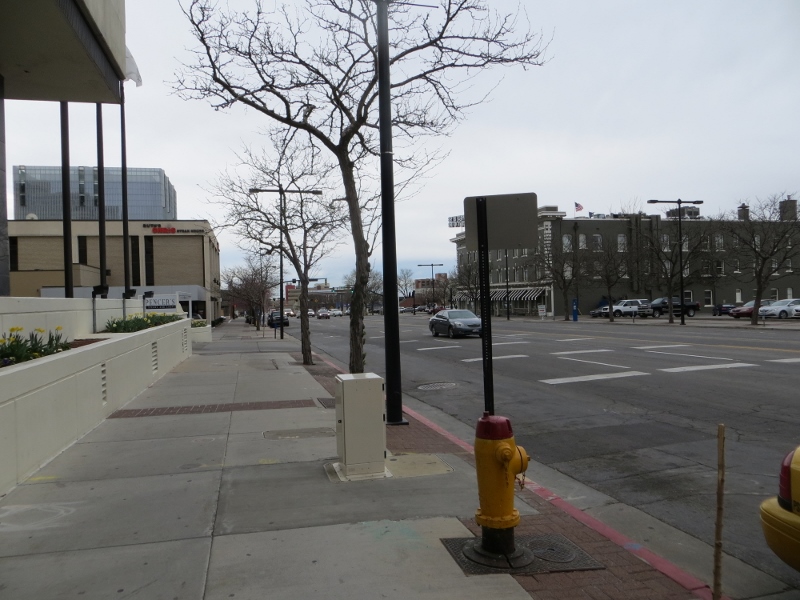 As you can see a typical Salt Lake City street is very wide. The residential streets are just as wide. 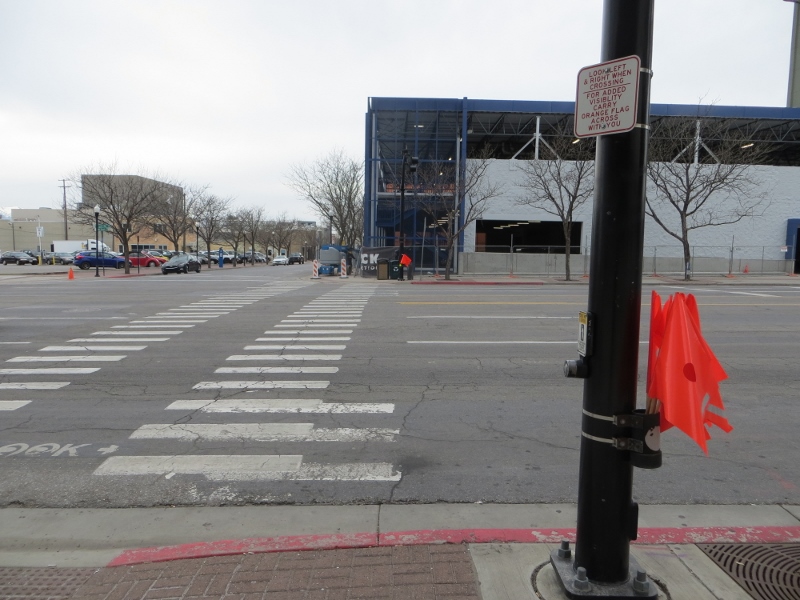 Because of the wide streets, many crosswalks have baskets of orange flags for pedestrians to carry while crossing the street to make themselves more visible to oncoming traffic. 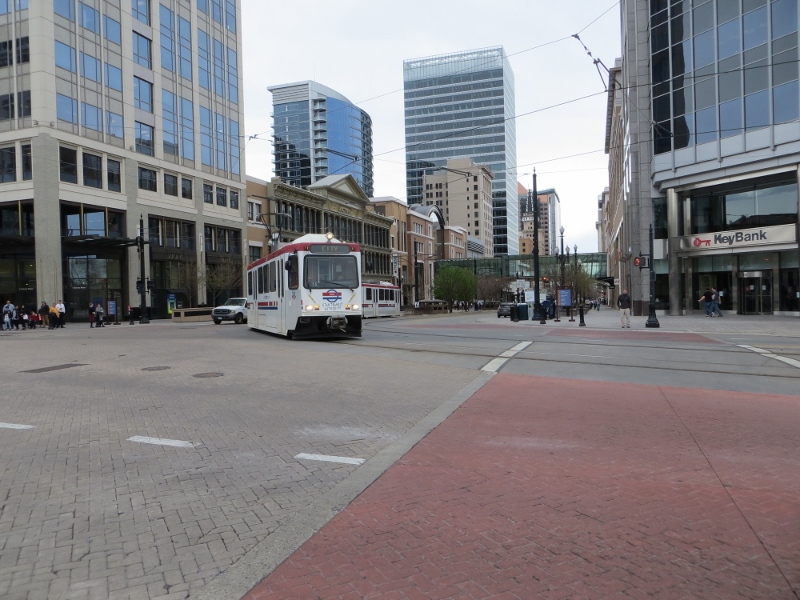 Generally speaking, wide streets and long blocks are not considered a good recipe for a walkable community. Salt Lake City, however, has made some changes to make itself more compelling to those on foot. The wide streets have made it possible to add light rail. 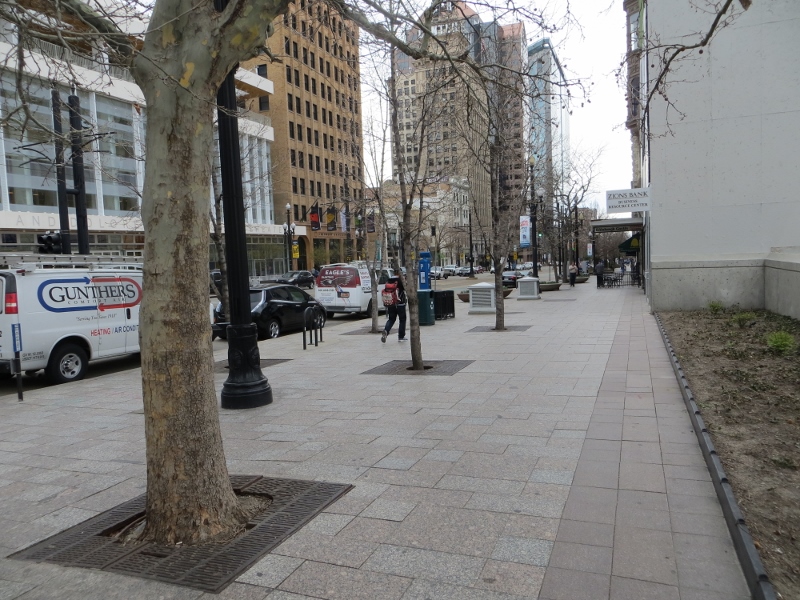 The wide streets have also made it possible to add plaza like sidewalks. 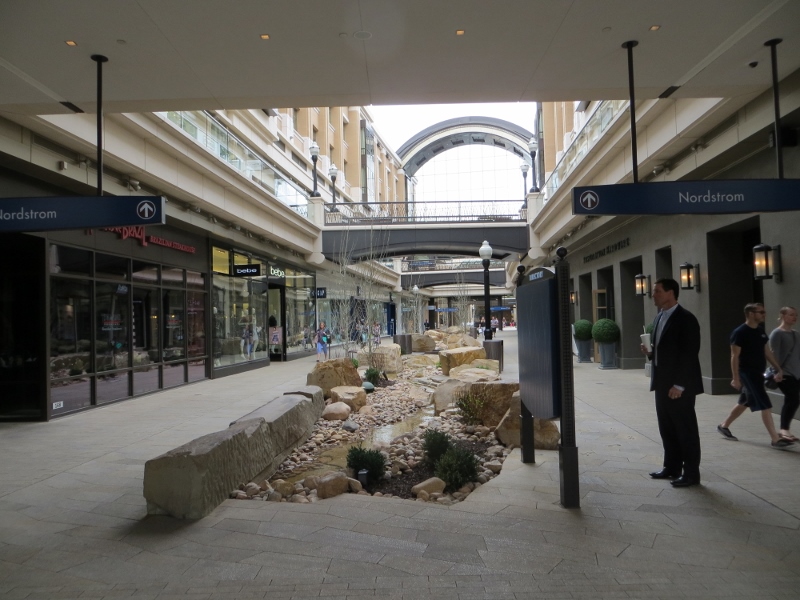 And Salt Lake has broken into this large downtown block to create a pedestrian oriented shopping area. 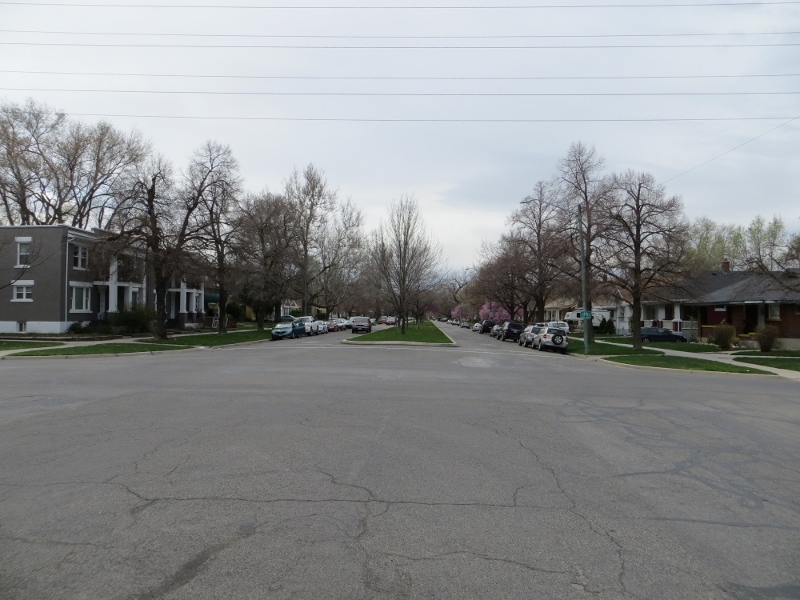 This residential street in Salt Lake has dealt with the tyranny of pavement with an in-street parkway. 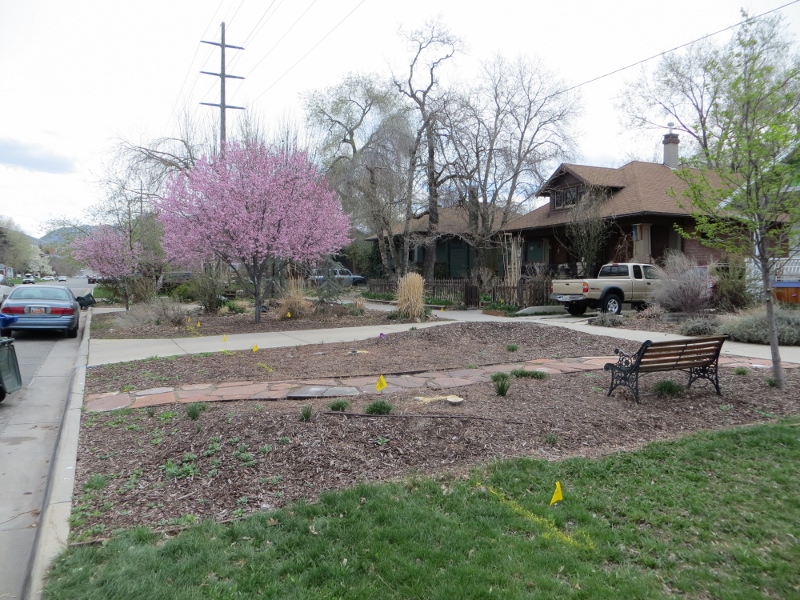 Other streets have reduced pavement by having very wide parkways. 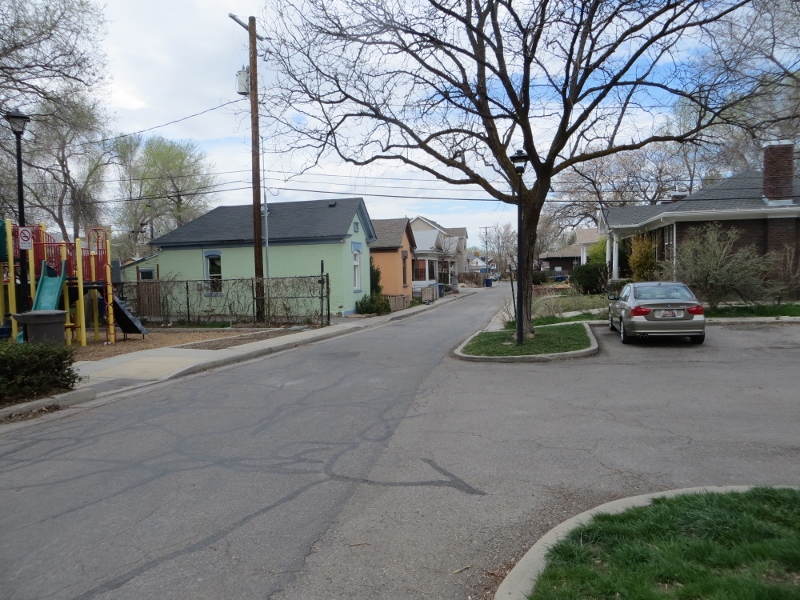 Some human-scaled streets have been built in Salt Lake by cutting a smaller road through a large block.

There are other features that you can spot while walking through the Mormon landscape. 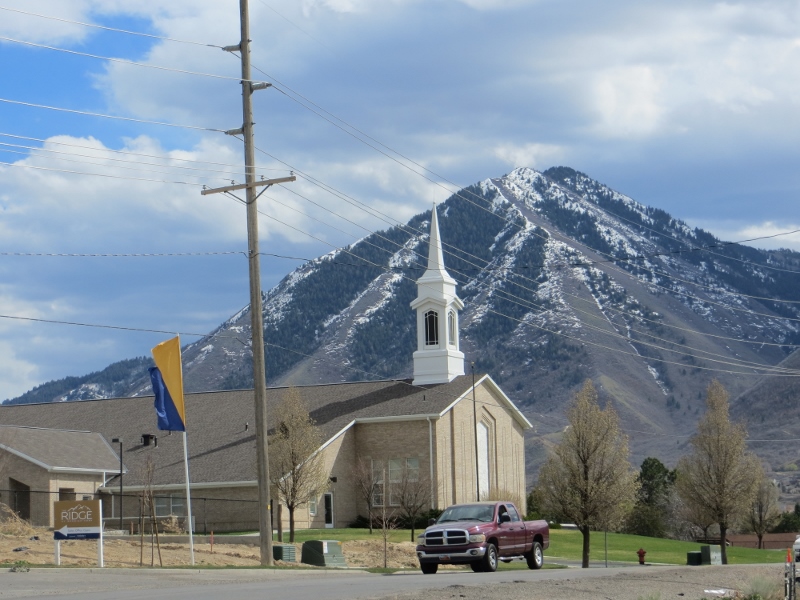 A Mormon church has a spire rather than a cross. You’ll see spires wherever you wander through the Mormon landscape. 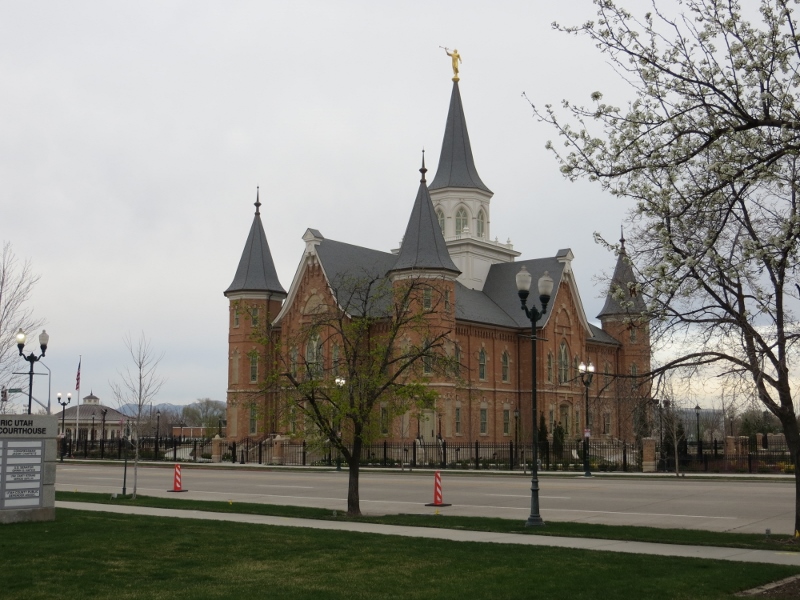 Notice the spires on this Mormon temple in Provo. 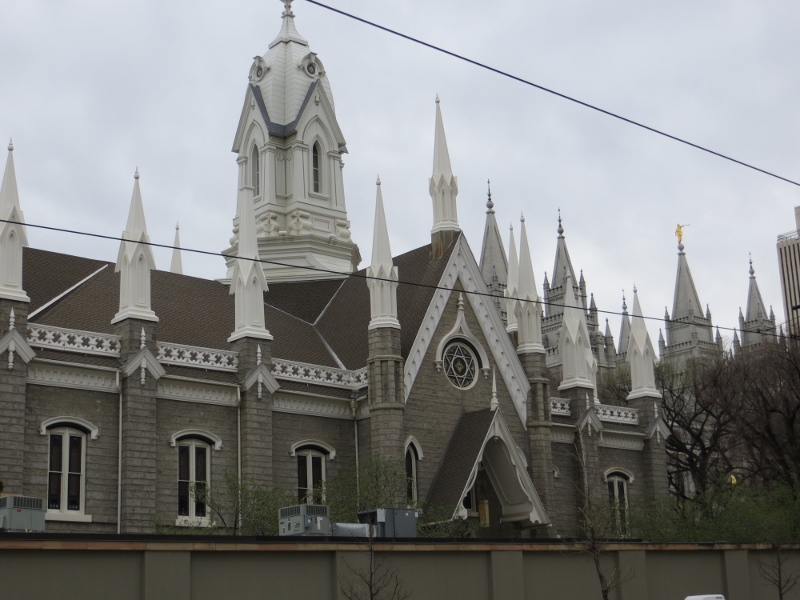 There is definitely a spire theme going on at Temple Square in the heart of downtown Salt Lake. 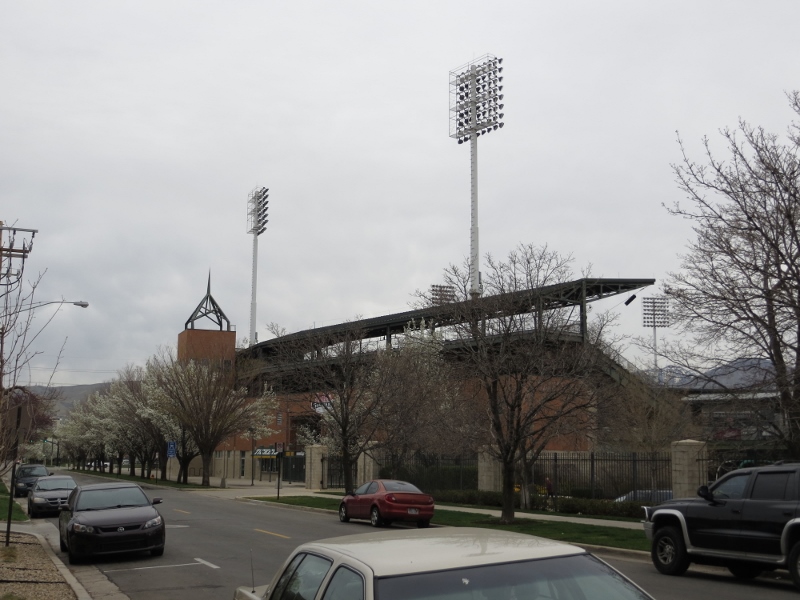 The spire theme even carries over to the local ballpark in Salt Lake.

You don’t have to travel to Salt Lake to find a wide street. You can find them in all Mormon developed communities. 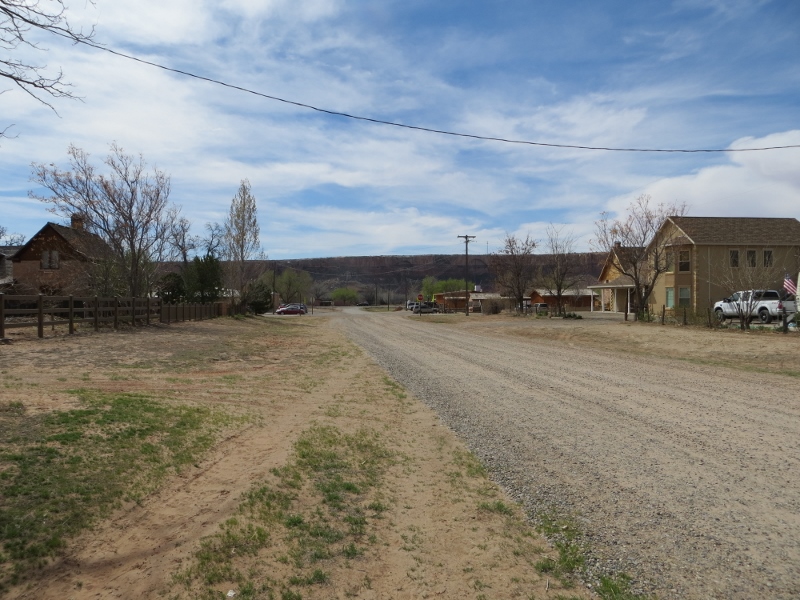 This wide street is in the very small community of Bluff in the southeast corner of Utah very close to the Four Corners. All the land between the two fence lines is part of the public roadway. The story of Bluff is extraordinary in the effort that Mormon pioneers went through just to reach Bluff. 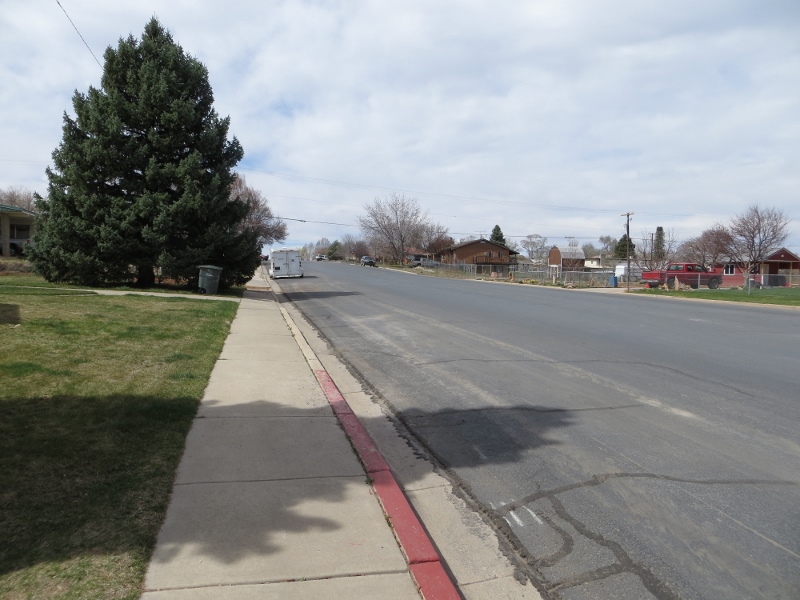 This very wide residential street is in Blanding, Utah. All of the streets in Blanding are this wide. 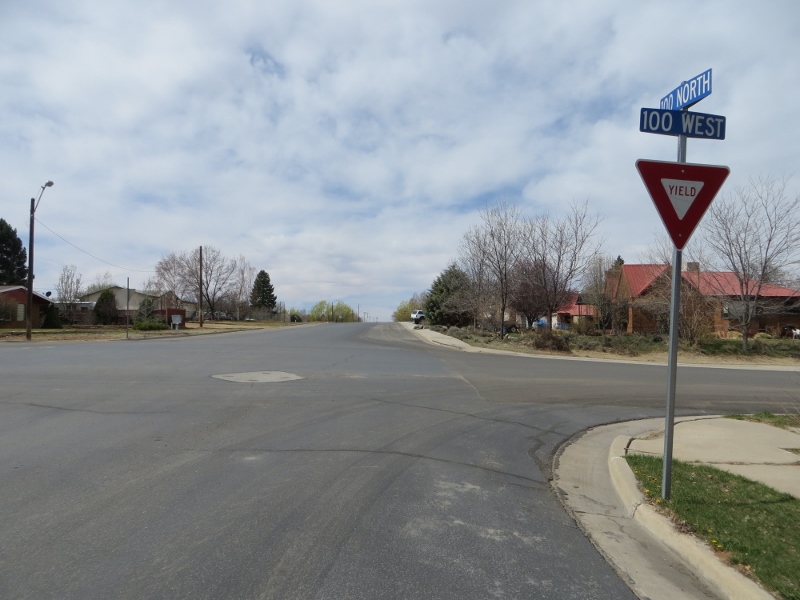 This is another street in Blanding. But if you take a closer look at the street name, you’ll that street name designates it’s relation to the town center. This is common in many Mormon communities, including Salt Lake and Provo. Because of this, a street address will closely resemble a map coordinate. The house in front of us likely has a street address of “101 West 100 North Street”. 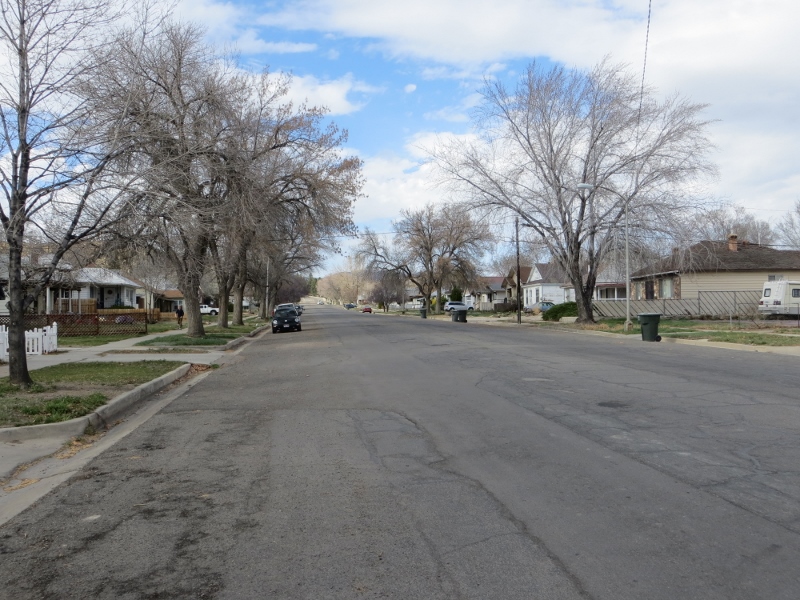 And again another wide street, this one is in Price, Utah. 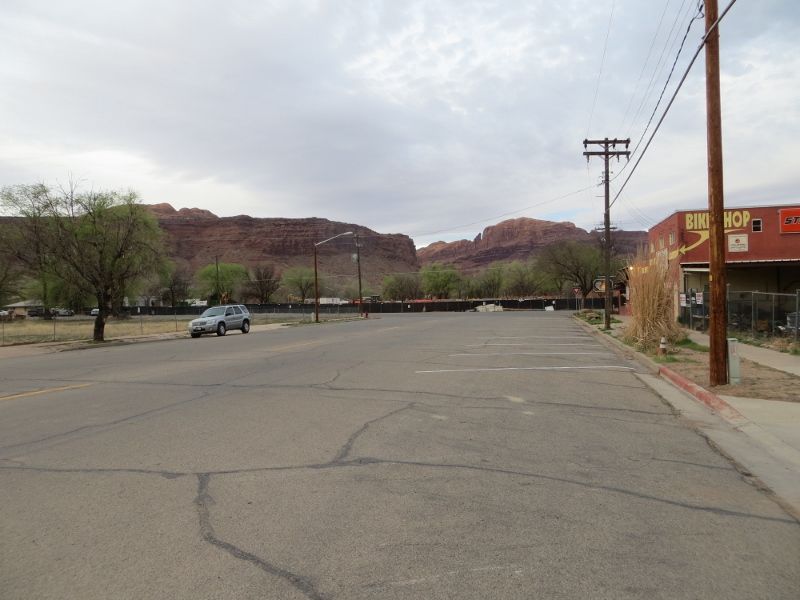 Before Moab, Utah became an international outdoor recreation destination, it was a uranium boom town. Long before uranium it was a small Mormon farming community as this wide side street shows. Moab has become so popular that the local McDonalds has to offer starting wages of $12.00 per hour plus benefits to attract employees. 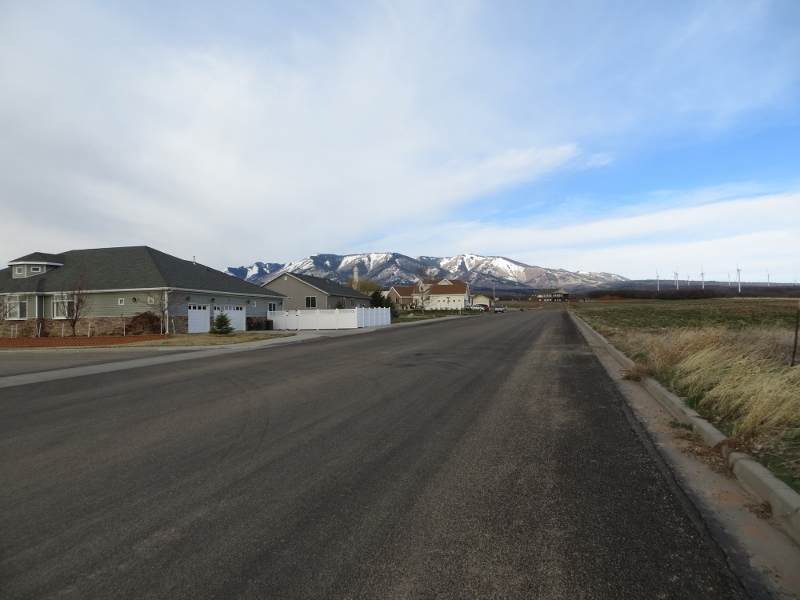 And even newer streets, such as this one in Monticello, Utah, continue the wide street theme. 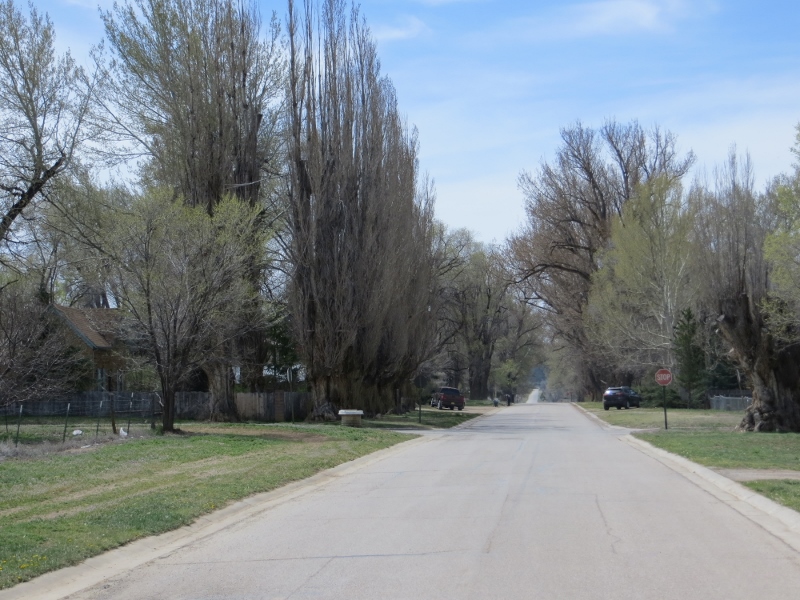 As mentioned earlier, Mormon communities are not limited to Utah. This street is in the very small community of Ramah in western New Mexico. The road right-of-way runs from fence line to fence line. The tall narrower trees to the left are Lombardy poplars. At one time the Lombardy poplar was considered the trademark of a Mormon community. Considering that some of the Mormon communities in the west are now approaching the age of 170 years old, it’s no wonder that they have disappeared. The only reason they still stand is Ramah is because Ramah in only 120 years or so old.

As I hope I have shown there is a sense of place to the Mormon landscape. As you visit new communities and neighborhoods, you may want to look out for items that separate that place from the norm and give it a sense of place.