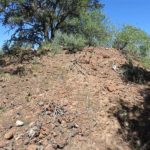 Taking advantage of a very cool day for late June, the dogs and I decided to wander to a very remote parcel of BLM land (public land) north of Cuba, New Mexico, in the heart of what was once home to the “Gallina Culture.”

The Gallina were an isolated people living in very remote and rugged fortified locations north and west of the Jemez Mountains. Some of their fortifications resemble towers. The Gallina were more or less contemporaneous with the nearby Ancestral Puebloan cultures of Chaco Canyon and Mesa Verde. They disappeared almost 750 years ago.

There is plenty of evidence to suggest that their disappearance was not pretty. Many if not most Gallina sites show signs of extreme violence. Some group, for some reason or another, had it in for the Gallina, and they either killed, chased, or scared them out of the region. It is unknown if the Gallina died out or were assimilated into another group.

The BLM parcel that we intended to visit has several Gallina sites including a tower. I had been there before, but it has probably been 15 years since my last visit.

If you are an outdoor explorer, it is helpful to know your state’s rules on trespass. In New Mexico, fences, gates, and the like must be posted with No Trespassing signs to enforce laws prohibiting trespass on your land. If a location is not posted, it is legal for you to park your car and start walking. With that being said, it is always best to keep your expeditions as close to or on public land for as much as possible.

Because we were starting from an unfamiliar direction we had to pass through some rough and wooded country to reach our goal. If you’re interested in exploring an area without an established path or road, a good tip is to find a cow path or game trail heading in the general direction as your destination. You may have to dodge some branches along the way, but you’ll at least be following a route that takes advantage of the land’s natural folds and contours. 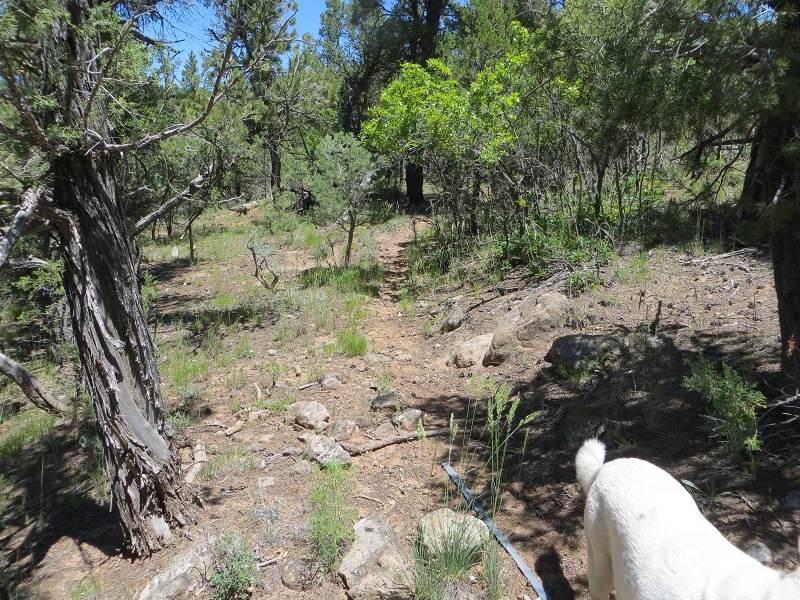 That trace of a path going off to the right is an elk run and is the easiest way to navigate through the woods.

In less than a mile we reached the base of a 300 foot tall mesa (which was our intended destination). We did see plenty of wildflowers and the occasional potsherd and piece of worked chert along the way. But when reached the base of the mesa the number of potsherds and other artifacts jumped into thousands. Most of them had clearly washed down from sites located on top of the mesa. 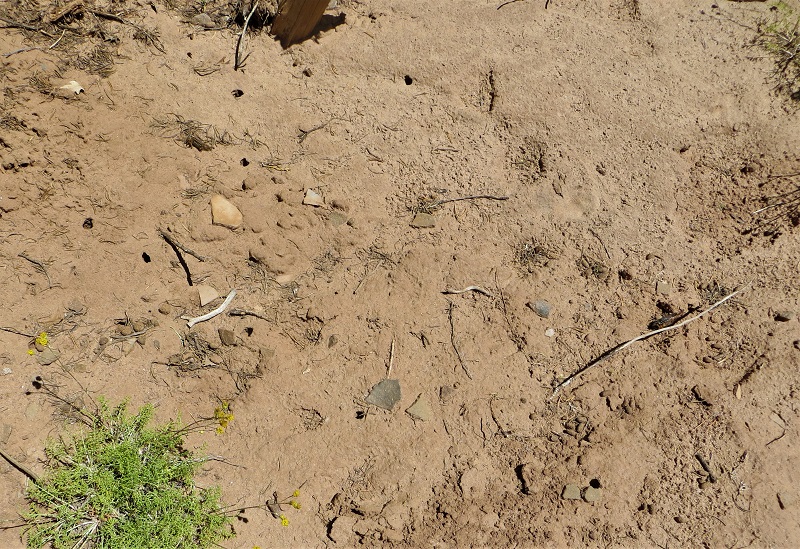 Here are a few of the potsherds we saw at the base of the mesa. In some places the ground was paved in potsherds. Those small holes are where cicadas emerged from the ground. The trees were buzzing from the cicadas. 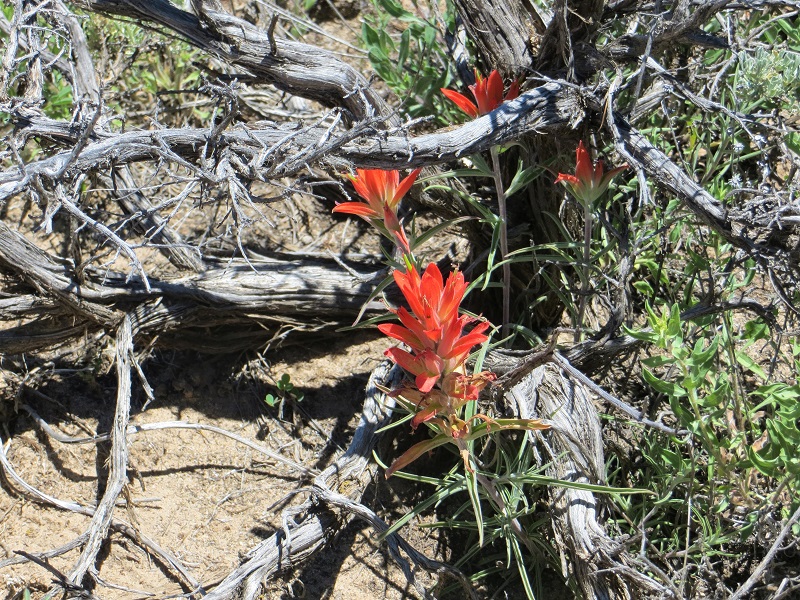 Indian paintbrush was one of the many types of wildflowers we saw on our walk.

We then worked our way to the top. With most of the approaches being very steep, it was easy to see how the mesa top would have been a very defensible and a seemingly safe place for refuge. 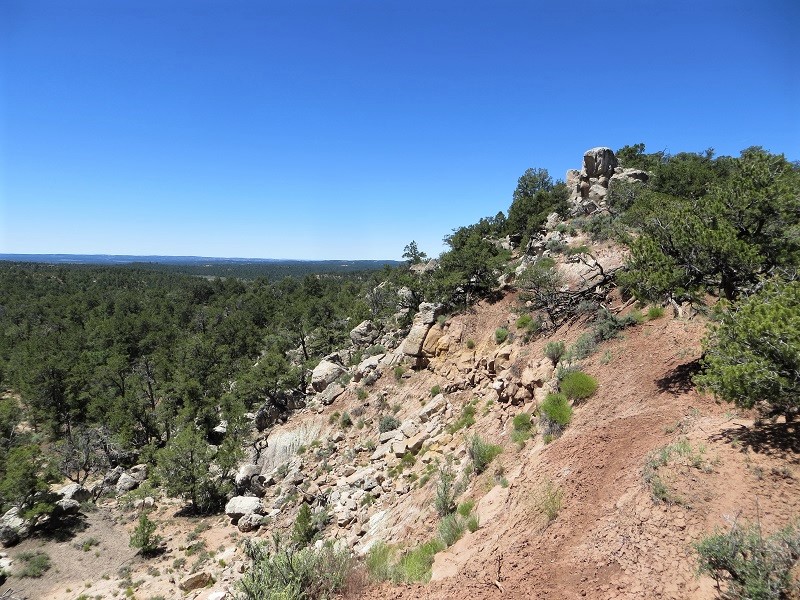 Here’s the final approach to the highest part of the mesa.

Yet when we reached the tower site at the very top of the mesa, it was clear that the mesa top had been breached and the tower torched. The heat of the fire was so intense that the adobe walls of the tower were baked into brick. In some place the heat vitrified (turned into glass) the adobe. Some of the glass was as green as a Coca-Cola bottle. 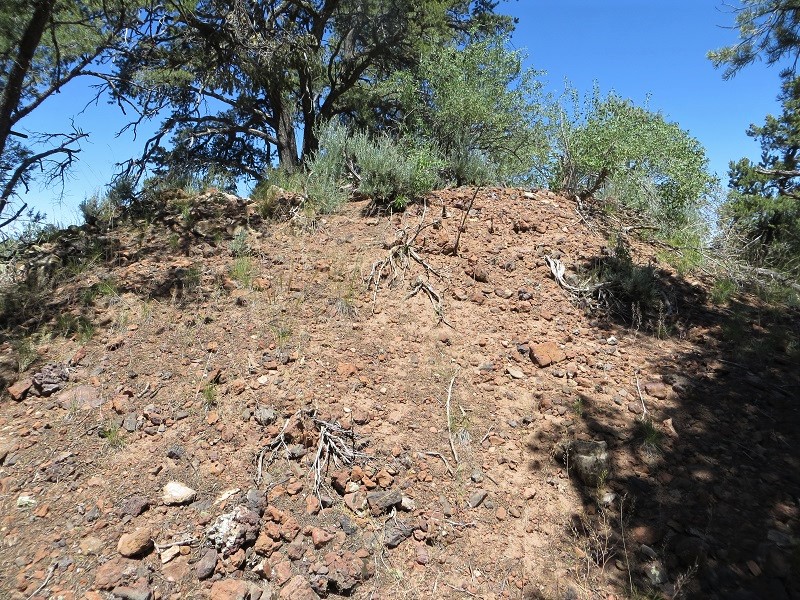 Here’s a picture of the tower from the bottom. The reddish debris are burned adobe. 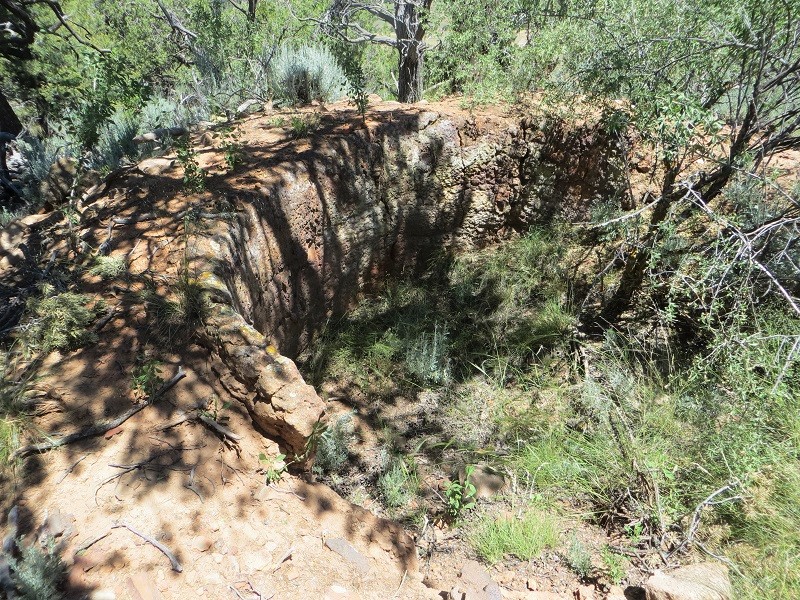 And here’s looking into the interior of the tower. That wall has been baked into a solid brick.

The question remains. Was the tower burned during an actual attack? (Archaeologists have found dismembered remains of people in other Gallina towers that have been excavated.) Or, did the Gallina people on this mesa top flee before the attackers could reach them? (In that case, the attackers would have torched the place to make sure that they never came back.) With this particular tower not having been excavated by archaeologists, we don’t know.

This tower did happen to be dug into by pothunters several decades ago, and in their haste to find an intact pot they tossed hunks of burned adobe out of the tower. If you want, you can pick up a piece to see how parts of the adobe have melted into glass. But like any archaeological site, don’t take home any souvenirs; leave everything behind so the next person coming along can make the same discoveries as you! 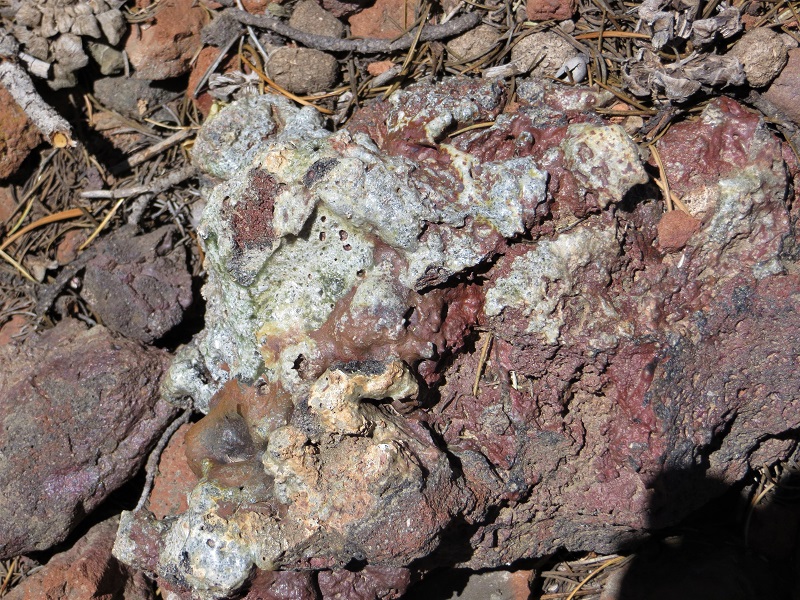 Here’s a chunk of burned adobe that has been partially vitrified into glass. The area that appears to be white in this picture actually has a greenish hue very similar to a Coca-Cola bottle. 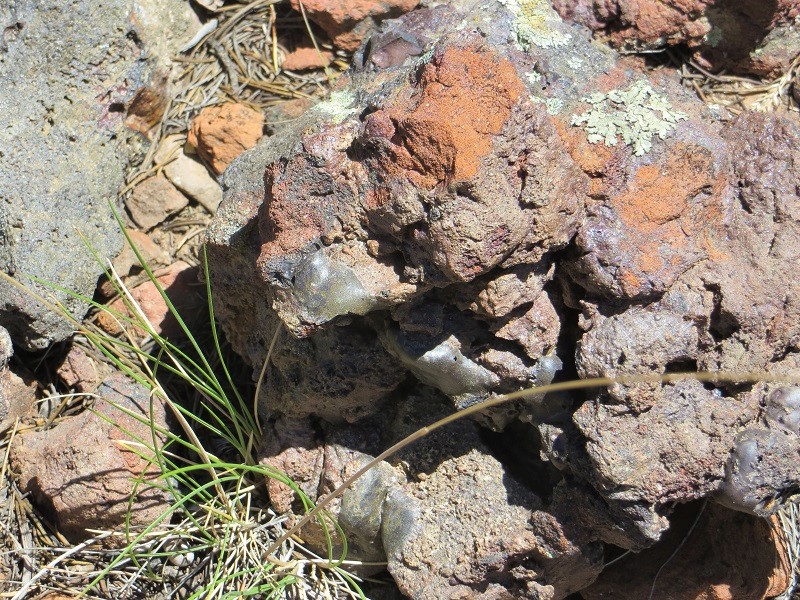 Here’s another chunk of burned adobe that has been partially vitrified. 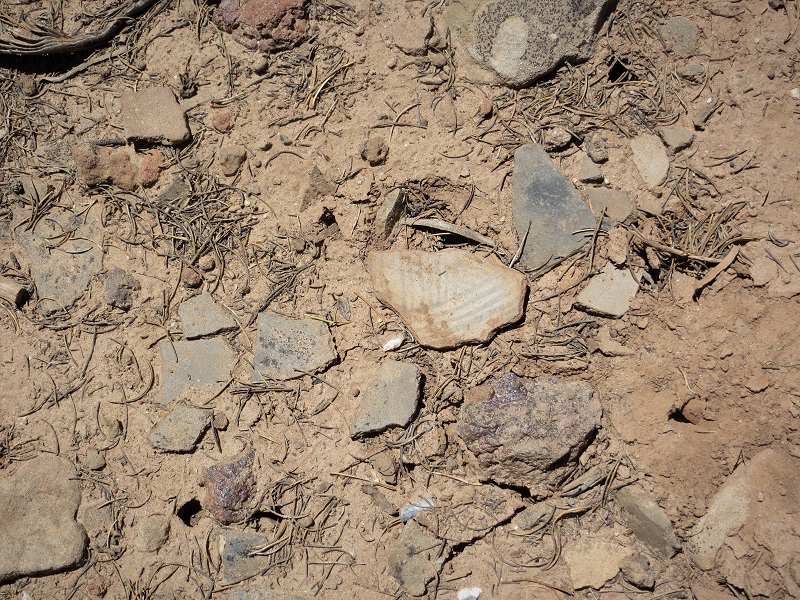 The mesa top was also paved in potsherds. 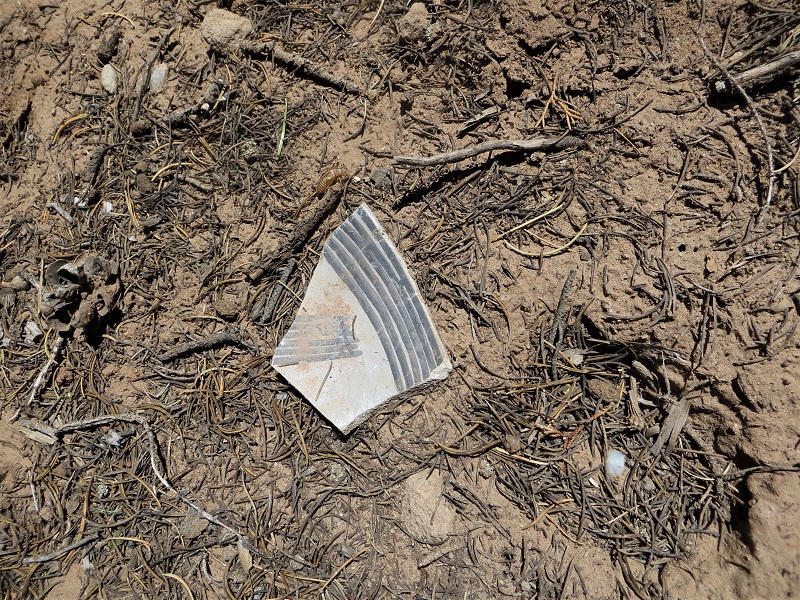 Here is a particularly nice decorated potsherd that includes part of the rim. Feel free to examine it, but please leave it where you found it. 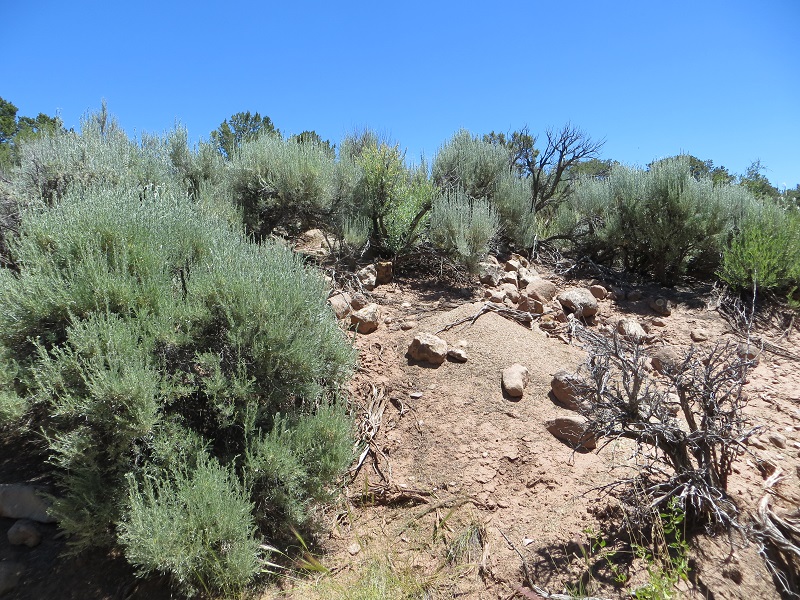 These rocks were once part of a structure not too far from the tower. 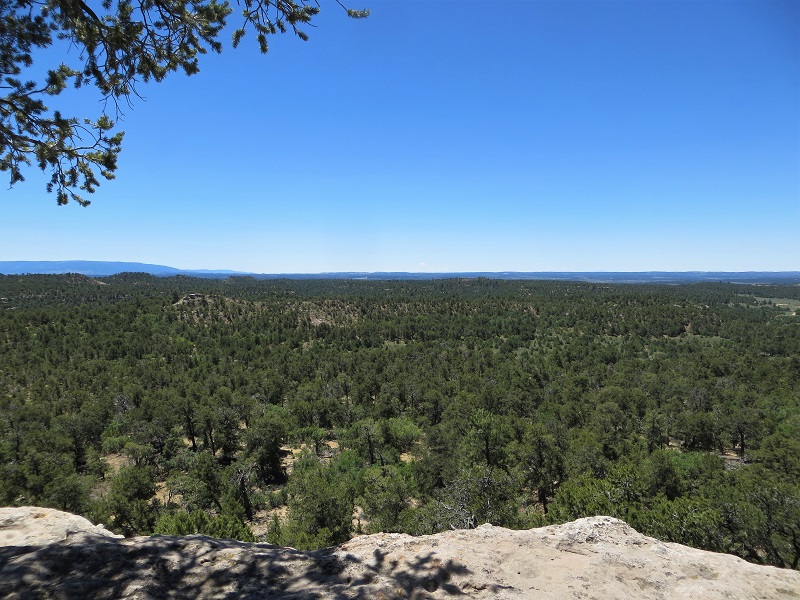 Here’s the view from the mesa top. Our car is somewhere in that direction.

After spending some time at the tower we checked out some other nearby sites (none quite as dramatic as the tower) before heading back to the car to conclude our wandering adventure. I hope this post and all of the posts in this blog show that you can always find something worthwhile no matter where you choose to wander. All you have to do is to get out and be present!