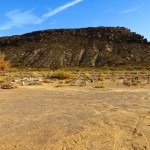 San Acacia Butte is located immediately west of the Rio Grande near the settlement of San Acacia a few miles north of Socorro, New Mexico. Some maps identify it as Black Butte and the locals call it Indian Hill. Some locals also call the settlement San Acacio rather than San Acacia.

Most people who visit San Acacia Butte come because they want to see rattlesnakes or they want to visit the New Mexico Principal Meridian. 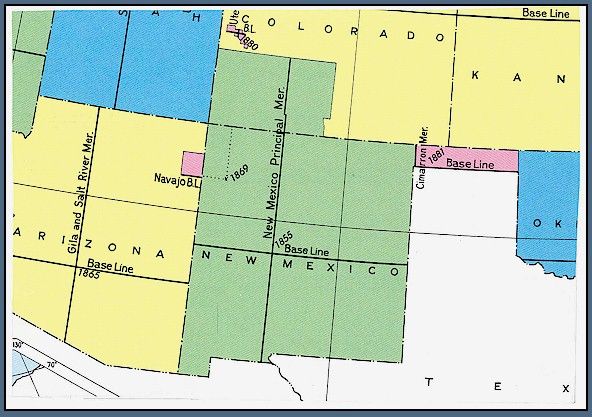 Several Principal Meridians were set across the country for surveying the country’s public lands. This meridian is the starting point of the New Mexico public lands survey. Land descriptions in New Mexico and parts of Colorado are based on this point (see the map above).

There are people who make the effort to visit Principal Meridian locations across the country. To learn more about where to find meridians, see – http://www.pmproject.org/.

If you visit San Acacia Butte, watch carefully for rattlesnakes. There are snake dens in the area and a very good chance of a spotting a rattlesnake during warm weather. I once ran into two rattlesnakes on a cold blustery day. I was even wearing my winter fleece and had my gloves on. The snakes obviously did not get the memo to stay inside their den that day.

The snakes were out because San Acacia Butte is covered with volcanic black basalt and black rocks can absorb the sun’s heat on a sunny day. To see for yourself pick up different colored rocks the next time you go out to see how they differ in temperature. Because snakes crawl on rocks, they can come out if the rocks are warm even when the air is cold. So keep your eyes and ears open.

Recently, we drove down to San Acacia to wander. As you may have read in The Gentle Art of Wandering, wandering is about seeing and letting what you see set your course. Wandering is not an in-and-out, station-to-station experience.

Our wandering adventure began as we drove into what remains of the settlement of San Acacia. Most of the settlement washed away during a flood in 1929. Today there are still a few houses, a cemetery, and a falling down church. 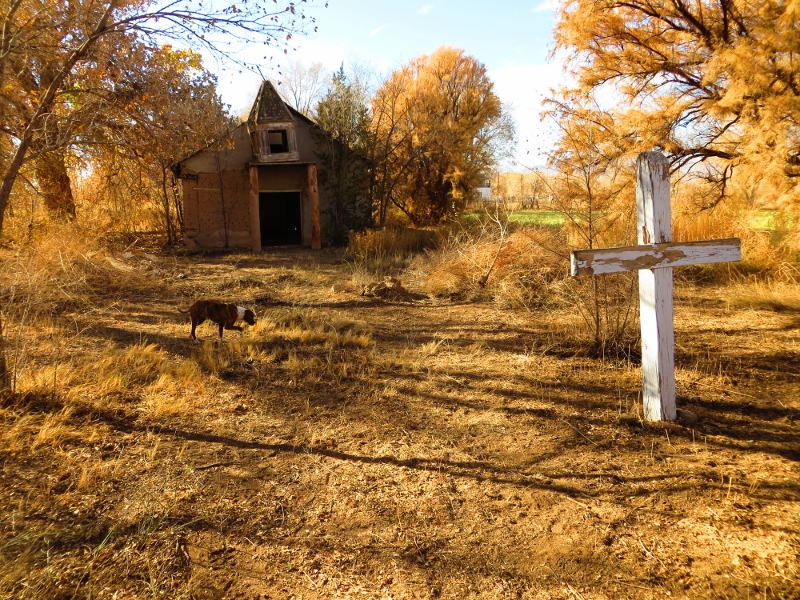 Part of wandering is stopping the car and getting out. We’re glad we did. This gave us a chance to meet a hee hawing donkey. 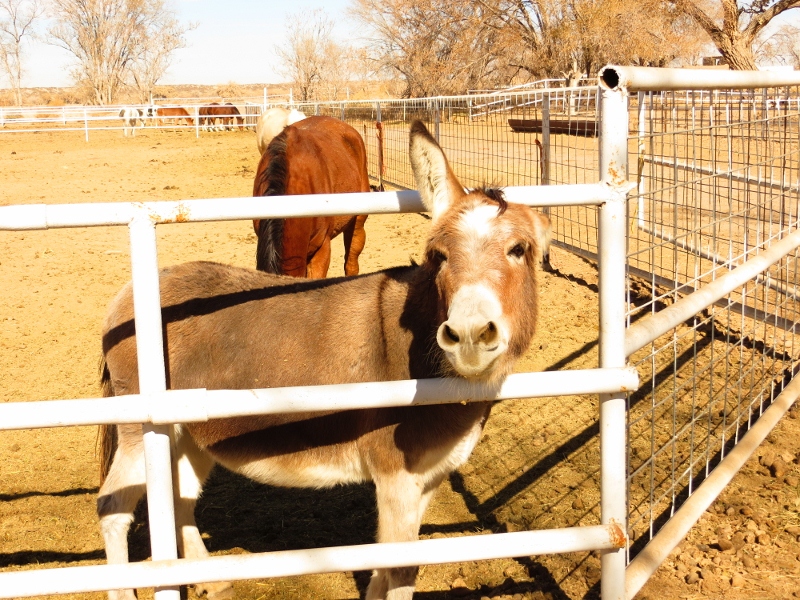 And then we walked into the church 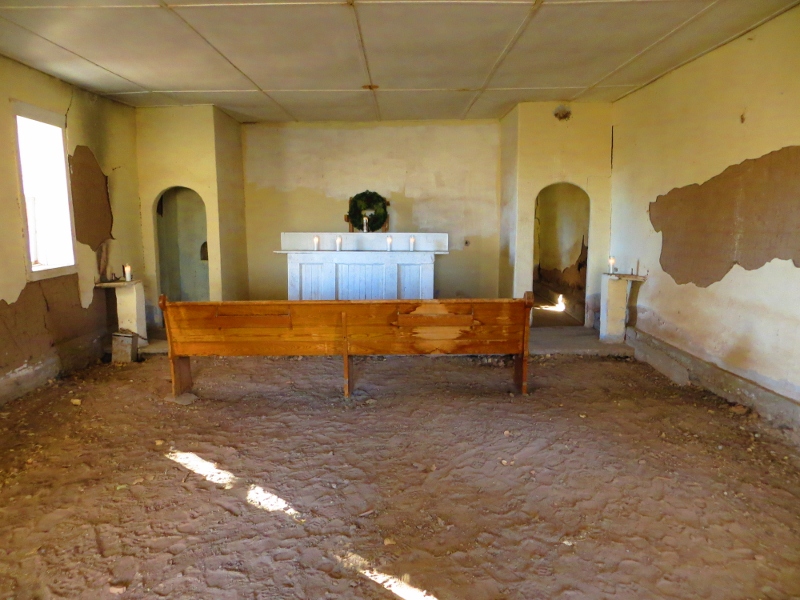 To our amazement we found out that someone keeps the candles lit and there even were a couple of murals painted on the walls. 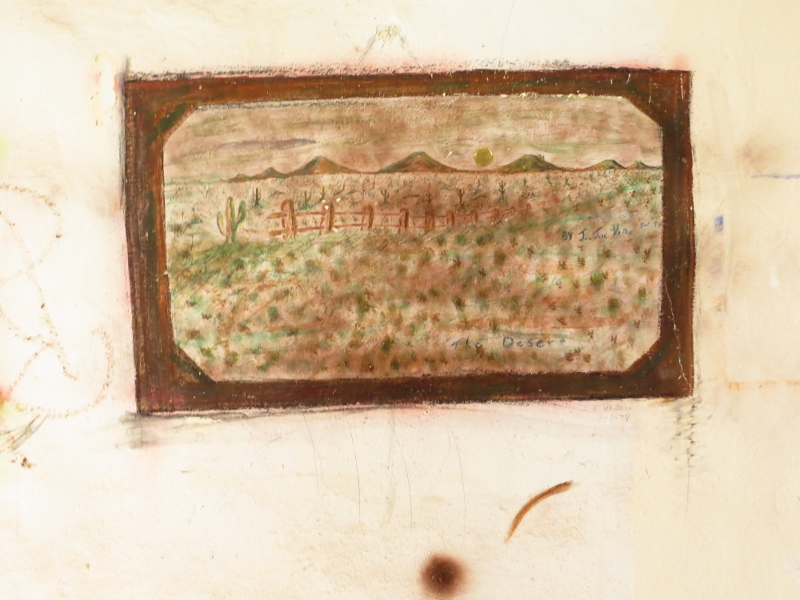 After exploring the church, we drove on to the butte 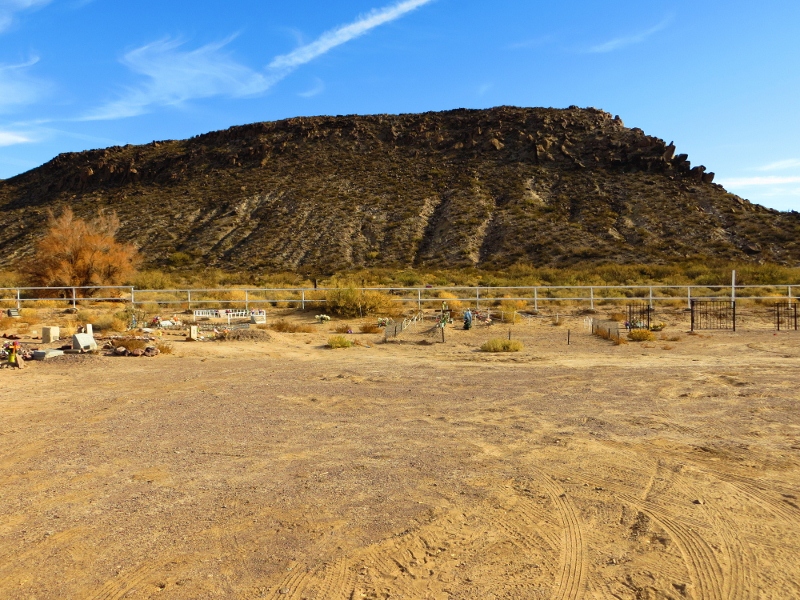 and parked next to the cemetery. 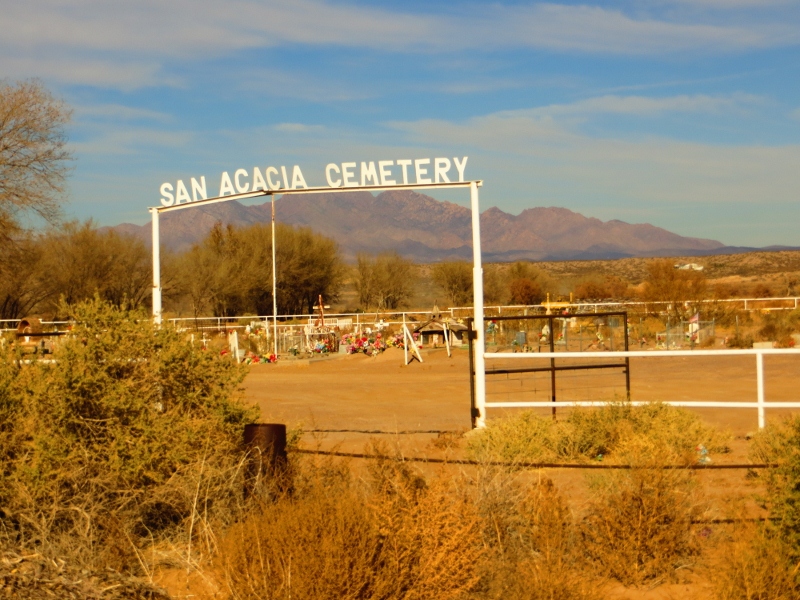 The cemetery too was worth exploring. 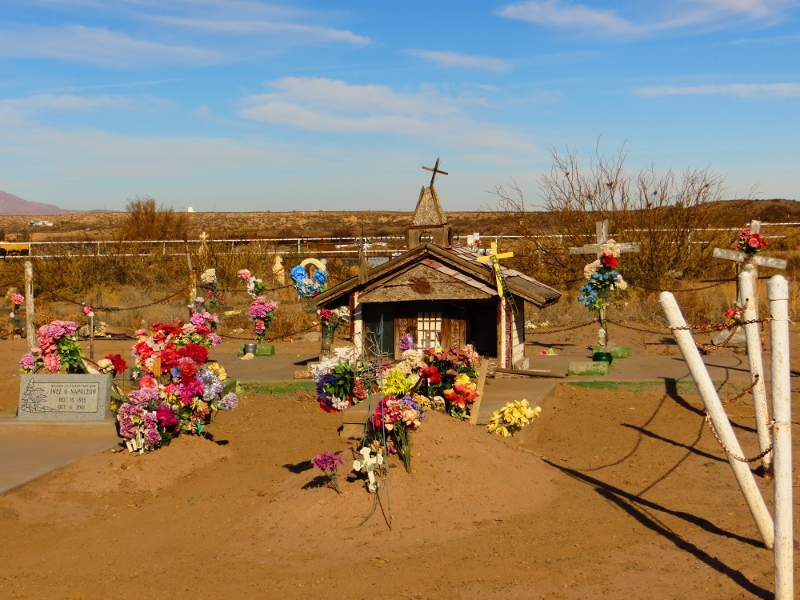 There was even a smaller version of the church in the cemetery.

We then followed the trail to the top of the butte. There seems be a theme in many of the posts in this blog about going to the top of something. It seems like you’ll always find something when you get to the top. In this case we started finding potsherds as we went up the trail. 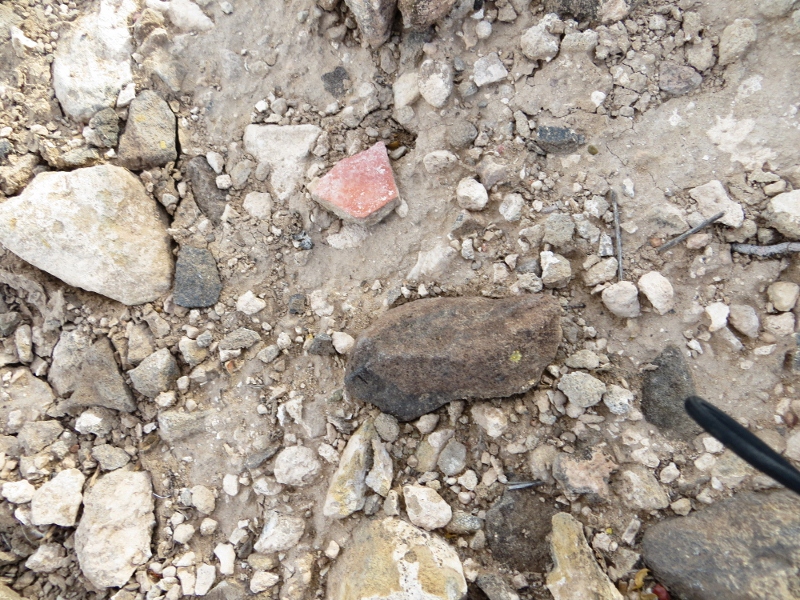 When we reached the top, we found these piles of rocks. 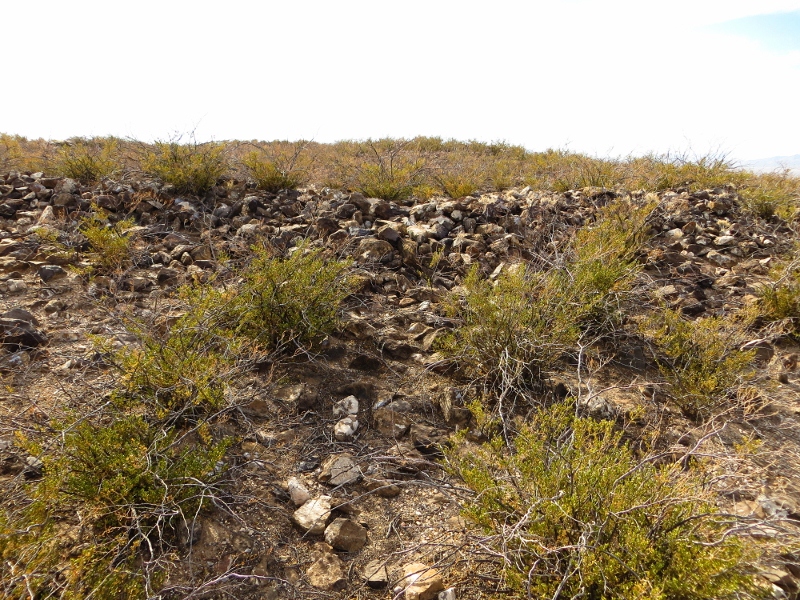 These rocks are the remains of a prehistoric Native American settlement. The walls went everywhere and there was evidence that some of rooms had been dug, perhaps by archaeologists or by illegal pothunters. 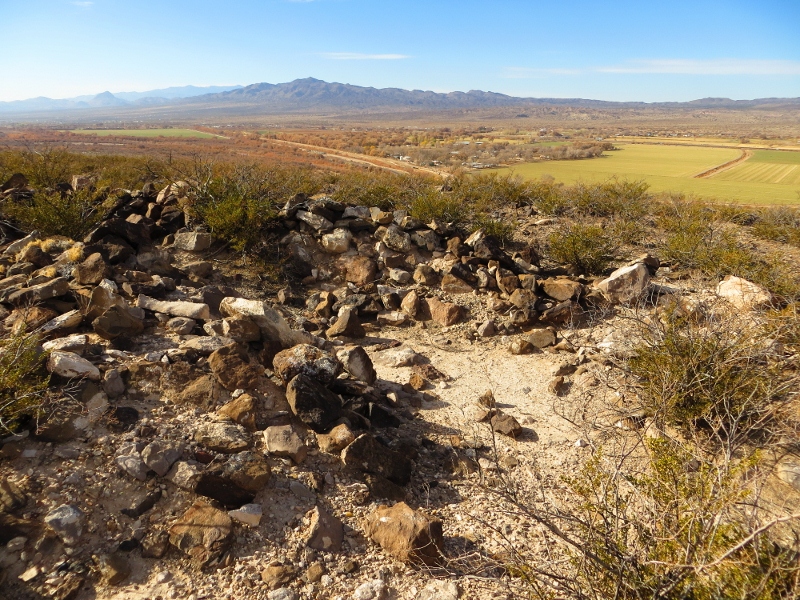 There were potsherds everywhere. 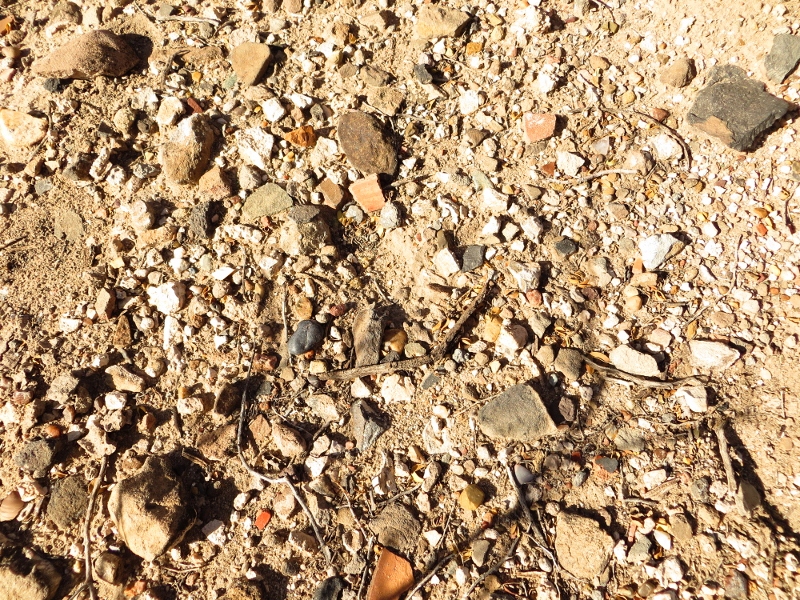 If you visit, please leave the potsherds on the ground. You can pick them up and look at them, but don’t take them home with you.

The top of the butte is very rocky and gnarly and covered with creosote bush. Along with difficult footing, the top of the butte is very uninviting and would be the last place you would want to build your home. Whoever lived on the butte must have been very motivated. There is considerable archaeological evidence in New Mexico that shows that there was a period of time when people moved to defensive locations.

When we wandered to the far side of the butte we could look down on the Rio Grande. 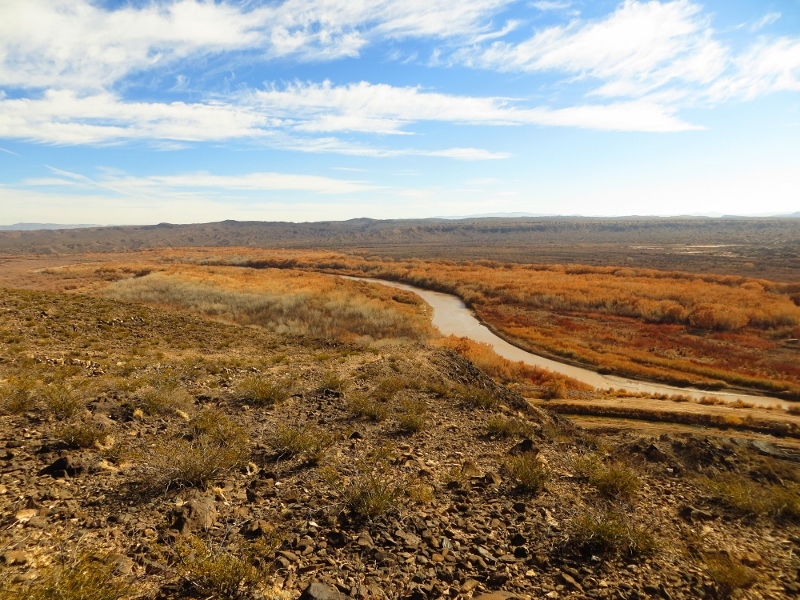 When we wandered back to the side overlooking the settlement, we found this cross. 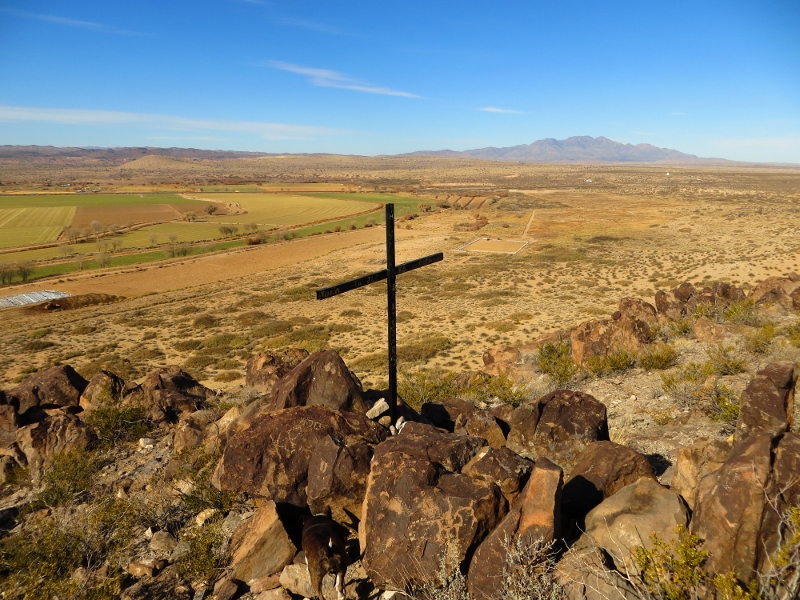 As we wandered through the rocks we found many examples of rock art. 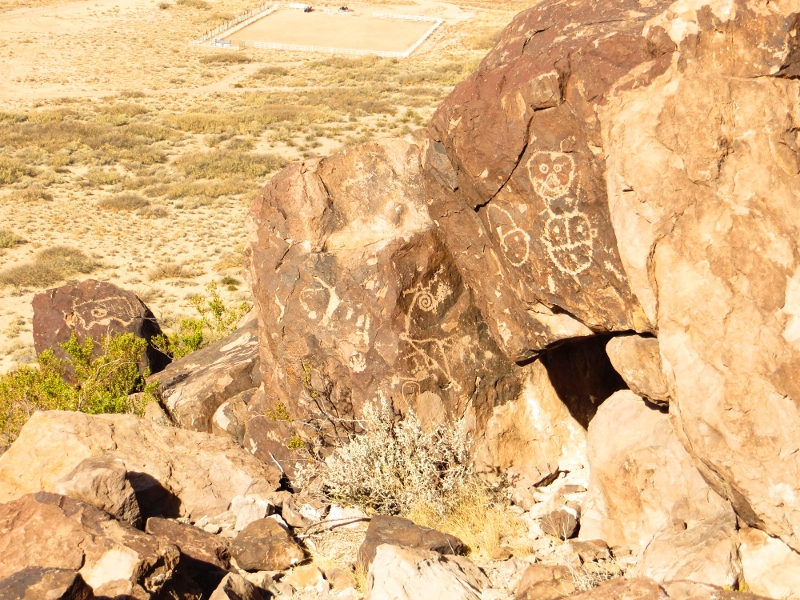 When we wandered in a little bit more from the edge, we found these drill holes in the rock. 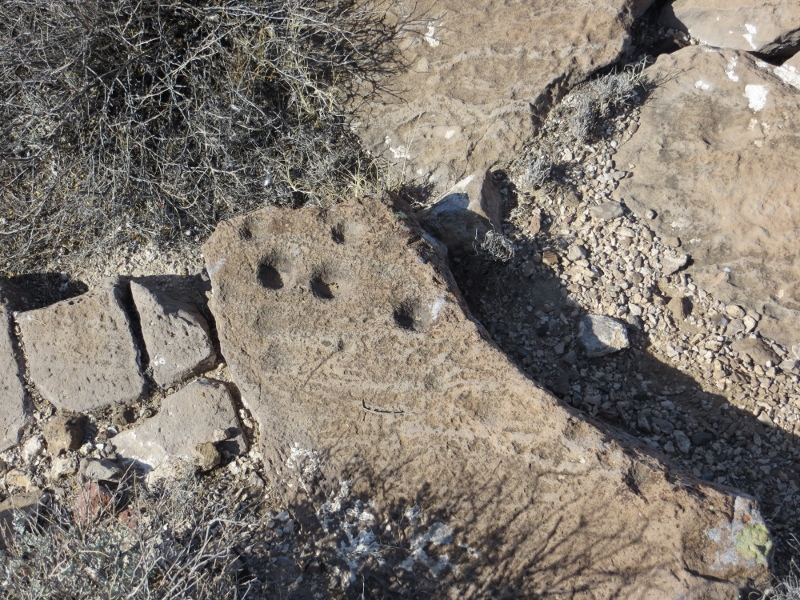 If anyone has any idea as to what these are, please let me know. That’s what makes wandering so fun. You always keep running into something you’ve never seen before and now have a new mystery to solve.

We then wandered a little bit more in from the edge and found the Principal Meridian marker. 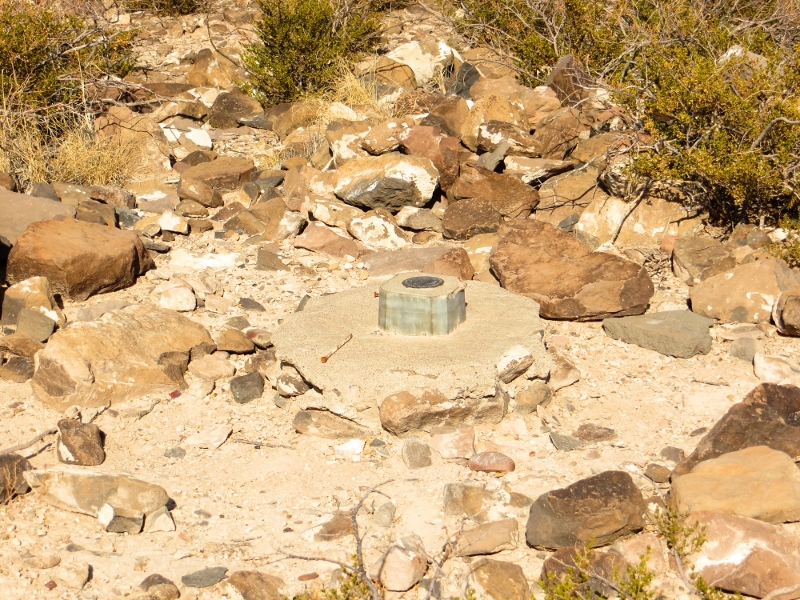 This current version of the marker was installed in 1956, 101 years after the meridian was established in this location. 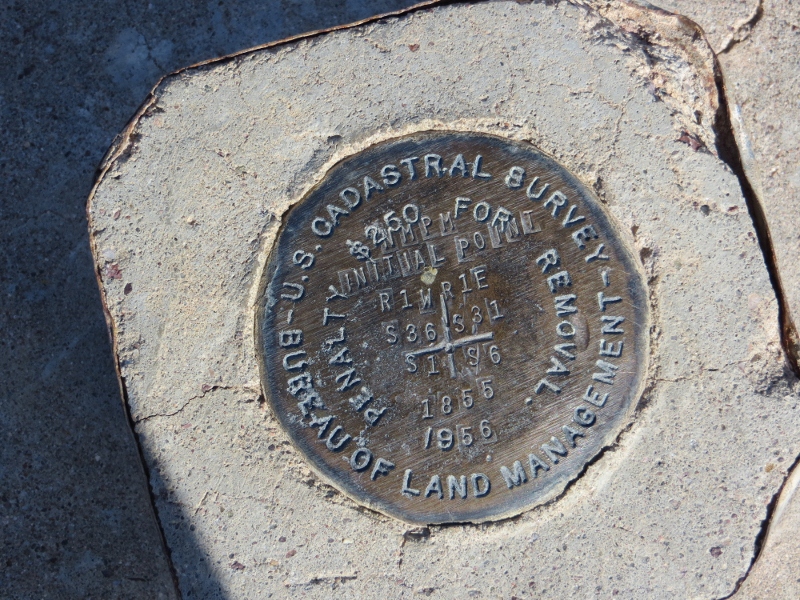 We could have made finding the Principle Meridian an in-and-out, station-to-station project. We could have parked the car, turned on the GPS, followed the GPS to the marker, and then hiked back to the car.

But we chose to wander. Wandering allowed us to find an abandoned church with lit candles lighting up the sanctuary, a hee hawing donkey across from the church, an old Hispanic cemetery, old Indian ruins, an amazing array of broken pottery, incredible rock art, and a new mystery or two to solve.

I believe the choice is obvious. I hope your trips are as productive.