Ideas for wandering can come from a number of sources. They usually start with your interests. One of mine happens to be natural hot springs. To that end I have bought hot spring guides, ordered data bases of springs, and even subscribed to the now defunct Hot Spring Gazette.

The Gazette was a true guerilla publication. It didn’t care where the springs were located; even if the spring was on private or tribal land. One of its tips was a place called Swimming Pool spring on tribal land in New Mexico.

Their tip was to look at a particular Forest Service map for a place called Swimming Pool on adjacent tribal land. You’ll need an old map because Swimming Pool and other off limits places of interest have been removed from the current maps.

Since I had an old map, I found Swimming Pool and thought it would be worthwhile to check it out. Getting there would require a cross-country hike of a little over three miles each way. That seemed like a reasonable challenge so my dog Lucky and I decided to do it.

Our hike started by following an arroyo that surprisingly had running water. Because the running water was far from the source, it was cool. It was also full of minerals and very salty. Before I could pull him away, Lucky was lying spread-out in the water and drinking it up. Within five minutes all of the water was passing out of his body. So if you’re looking for a quick weight loss program, I know some water you can drink. 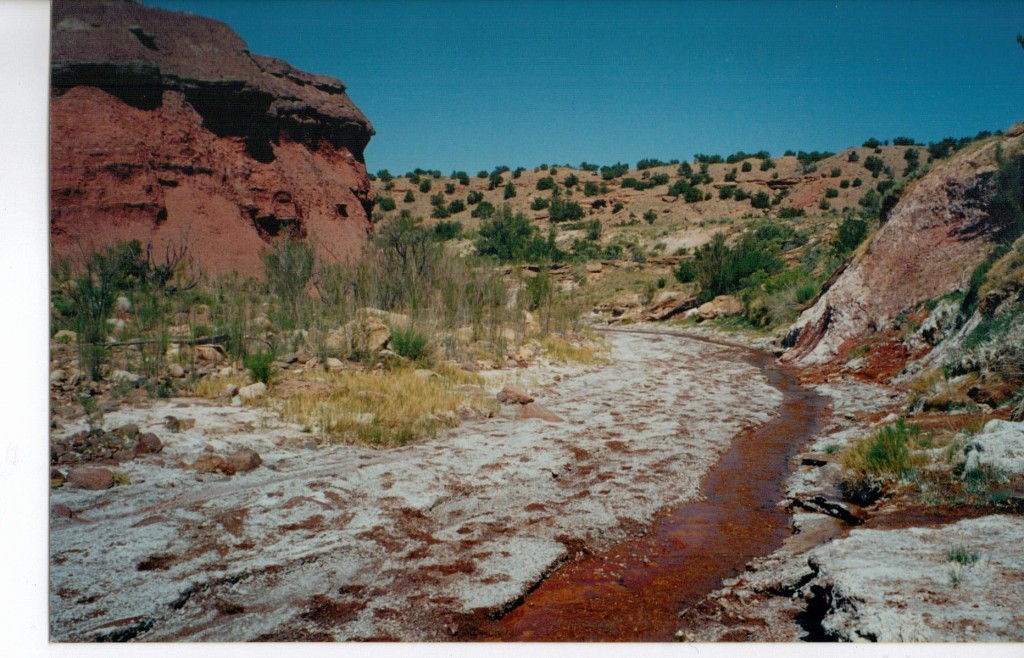 This is the arroyo we followed to reach Swimming Pool spring. Don’t drink the water.

As we came closer to Swimming Pool, we found several springs. They were all travertine domes. The domes are a result of the minerals in the water being left behind after the liquid evaporates. The tops of the domes had crater like openings. 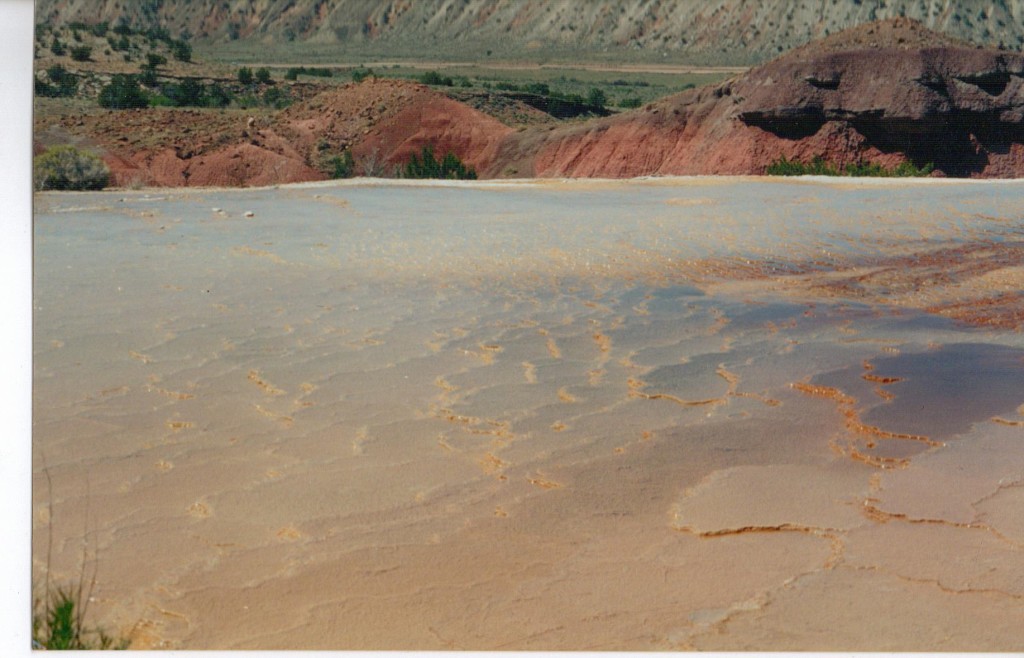 You can see how the travertine is building a dome on this spring.

Some of the springs were no longer active and dry. The crater on the tops of the dry springs opened to big dry cavities about ten feet deep.

The active springs had water inside their craters. In some craters the water reached the surface and flowed off the top. In others, the water was several feet from the top. In some of them the water was bubbling and gurgling from all of the carbon dioxide in the water. The water was literally bouncing. I’m sure if you stuck your head in a crater long enough you would probably suffocate from the lack of oxygen. 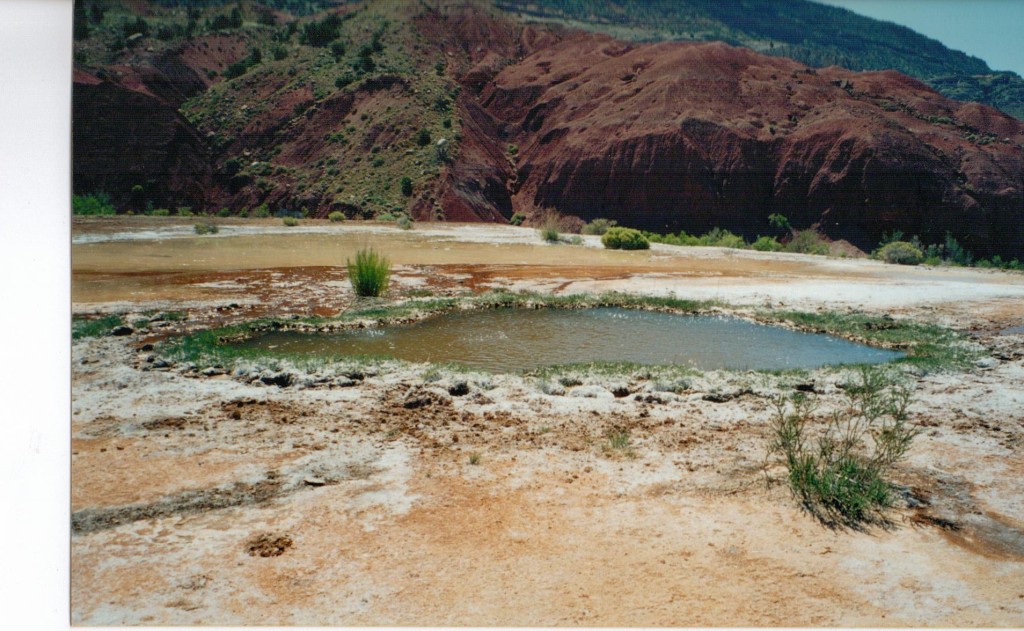 This is one of the active springs. Look carefully and you can see how the water is almost alive.

I did touch the water, and it was warm but not hot. More like room temperature as opposed to a hot bath. But the water was warmer than air temperature and clearly qualified as a warm spring. With the nature of the craters and the bouncing of the water, I wasn’t about to push my luck by taking a soak. Nor did I want to dilly dally in an area where I might not have permission to visit.

The area was also stunning and a soak seemed out of place. We also had some more hiking to do before reaching Swimming Pool. When we reached it, it almost took our breath away. It was huge. It was almost a perfect circle that had to be over fifty feet across. The travertine deposits had built a wall to hold in the water, almost like a swimming pool. And except for a few cows in the area, we had the place all to ourselves. And the view was amazing. This was truly one of the great places on earth. 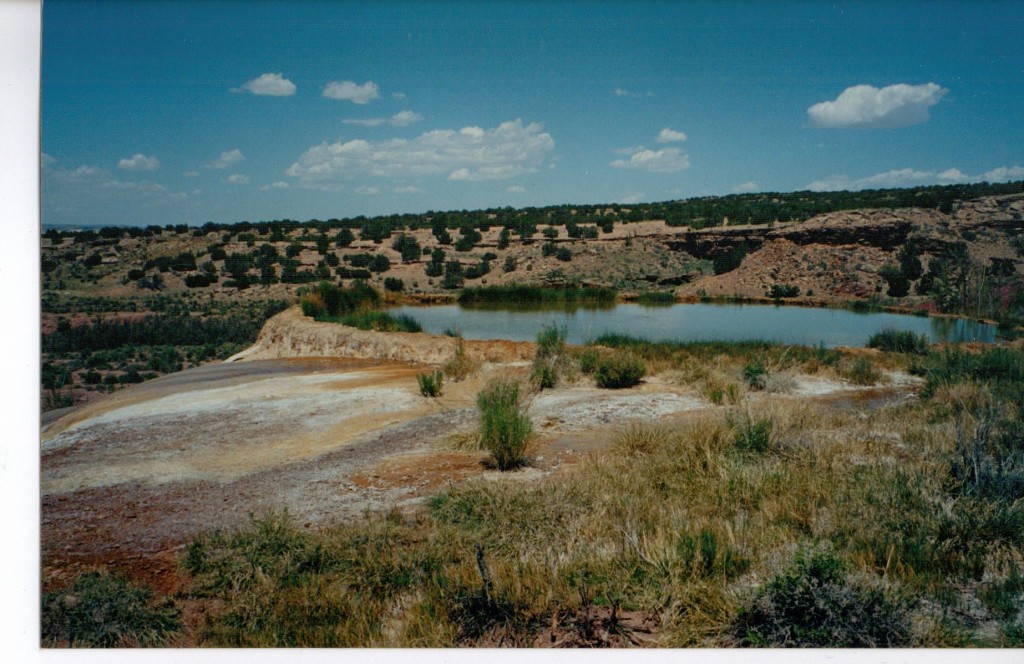 This is Swimming Pool spring. It is amazing to find water like this in the desert.

After spending a few minutes walking around, we crossed a dry arroyo to start heading back to the car. Just as we got to the top of the other side of the arroyo, a cow was standing there to greet us. The cow was not happy; it was furious and made it very clear that we were not going to go any further.

We retreated and walked inside the arroyo. When the arroyo became impassible we tried climbing out again, and guess what, the cow was
waiting for us at the top and chased us back down. Now we had to work our way along the inside wall of the arroyo.

When I thought it was safe, we climbed back to the top. This time the cow was maybe two hundred feet away from us. She spotted us and started charging in our direction. Lucky and I ran as fast we could along the edge of the arroyo. Just before the cow closed in on us, we jumped over the side the arroyo and landed in some soft dirt about five feet below.

We stayed in the arroyo and finally reached a junction with another arroyo and were able to climb out on the other side. When we turned around, the cow was still there. She had been trailing us the whole time. Fortunately, we now had a deep arroyo separating us.

She watched us to make sure that we were headed out and not coming back. It was almost like she told us, “this is not your land; you don’t belong here and don’t ever come back”. We never have come back and never will.