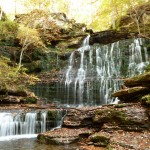 A basic premise of The Gentle Art of Wandering is that once you adopt the mindset of wandering you will discover that you can wander anywhere. While visiting my mother-in-law in Tennessee, the dogs and I spent the day wandering looking for waterfalls.

Every place has something special to offer and Middle Tennessee happens to have waterfalls. The falls are there because of water flowing off the Highland Rim, a limestone escarpment coming off the Cumberland Plateau, into the Central Tennessee Basin. You have a good chance of finding a waterfall wherever a water course reaches the edge of the escarpment.

One of those edges is just up the street from my mother-in-law’s house at Old Stone Fort State Park. Old Stone Fort is a Native American ceremonial enclosure built almost two thousand years. It is a network of walls built along the edge of a bluff where the Big Duck and Little Duck Rivers reach the edge of the Highland Rim and come together. The area between the rivers is enclosed by the ceremonial walls. The circumference of the enclosure is more than a mile.

Both the Little Duck and Big Duck River have falls as they drop off the Highland Rim. 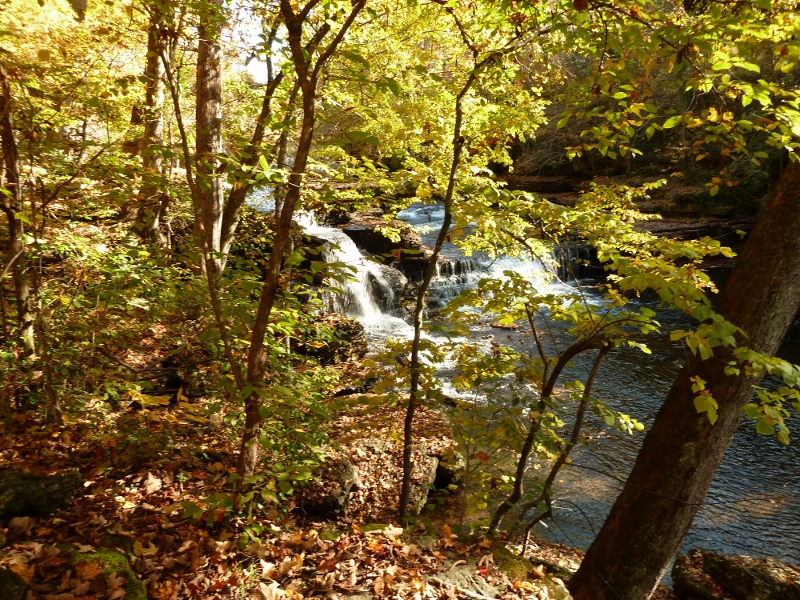 When you walk into Old Stone Fort you’ll pass through a relatively narrow passage way. 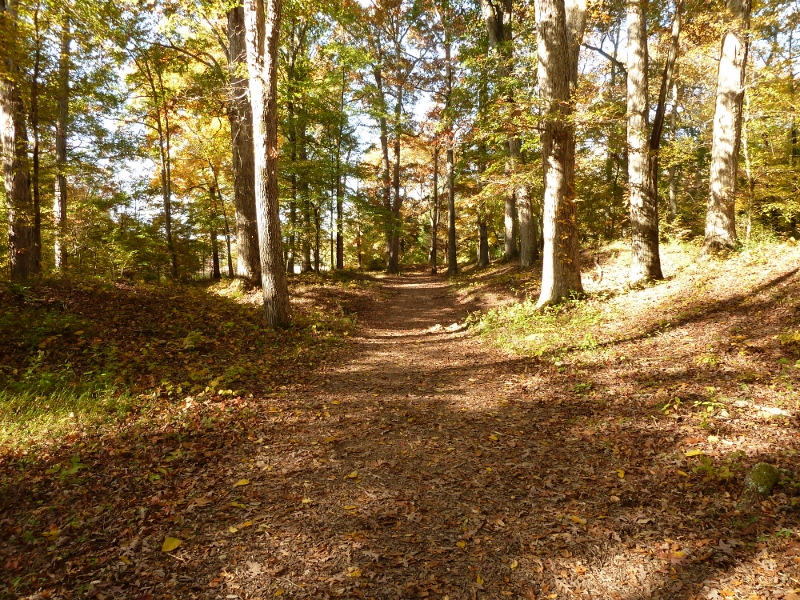 Those mounded rises on either side of you are part of the walls. The passageway is lined up with the summer solstice sunrise. Can you imagine watching the sunrise on the solstice and seeing the sun come right up through the passage?

When you pass through the passage you enter the enclosure. 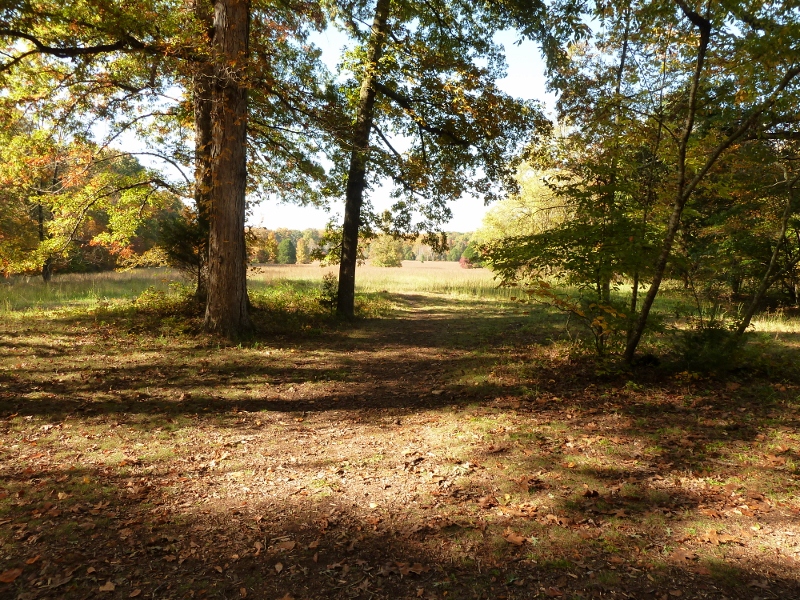 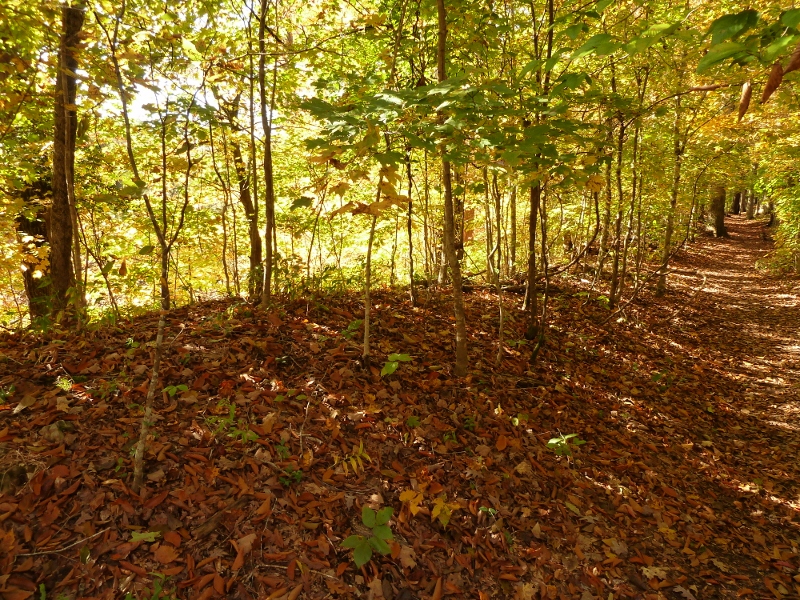 The Little Duck River is below carving through the limestone. 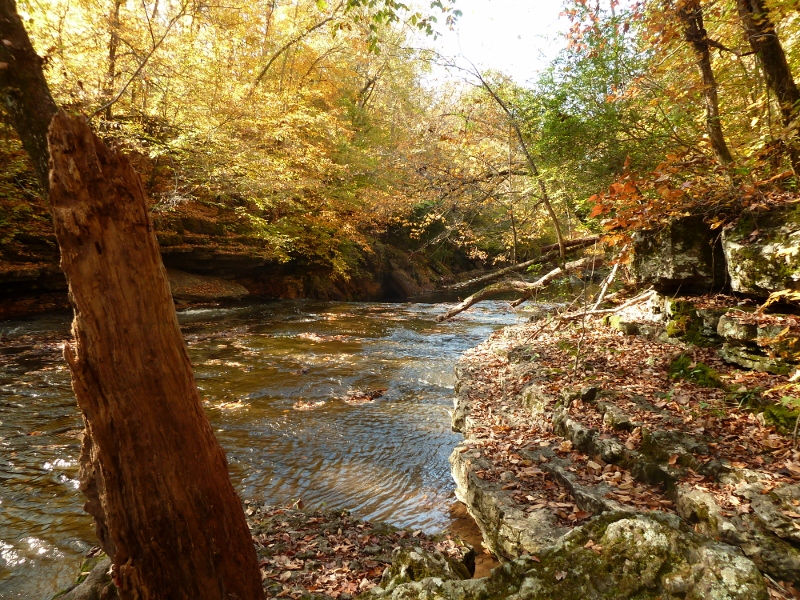 You can see that water is dropping over the ledge just ahead. 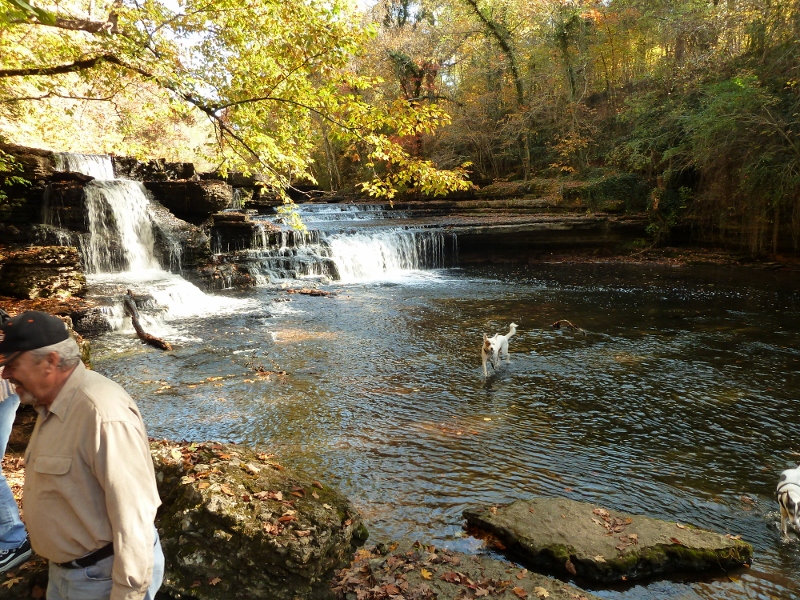 But as you continue along the ceremonial enclosure 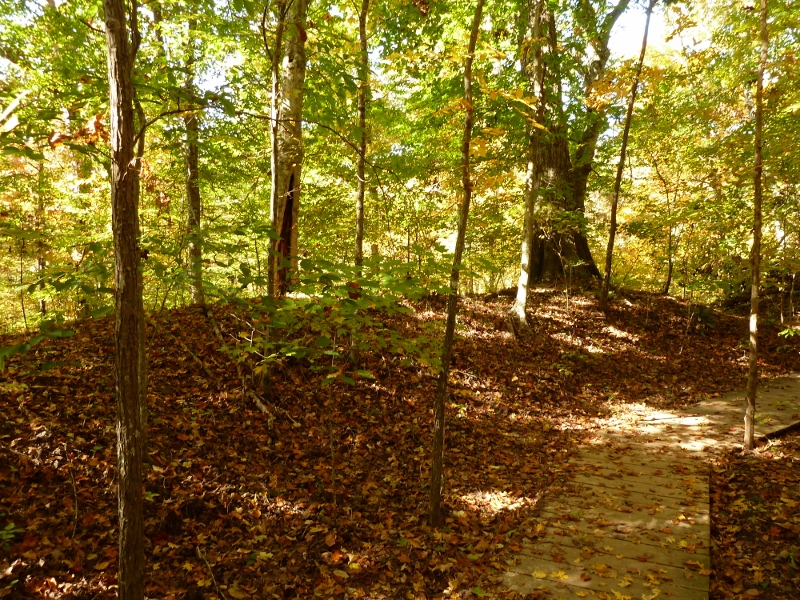 You’ll reach the Big Duck River and its waterfalls 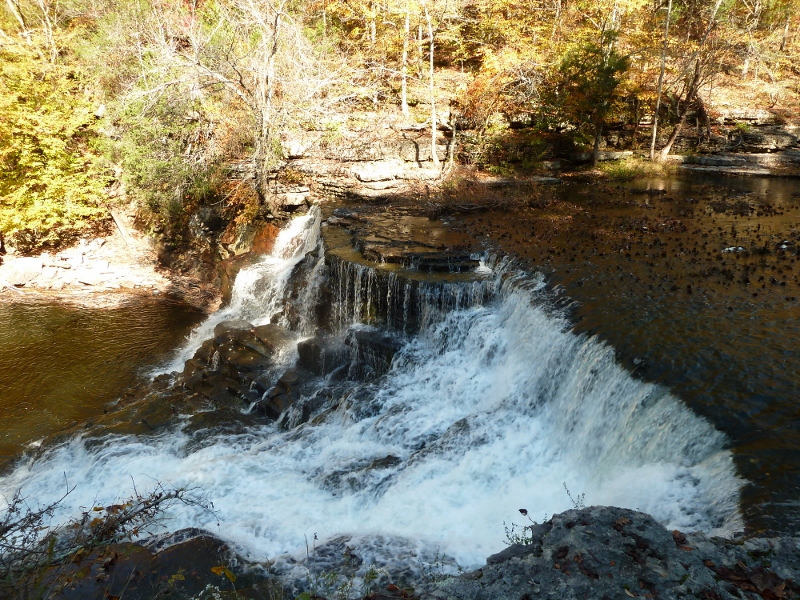 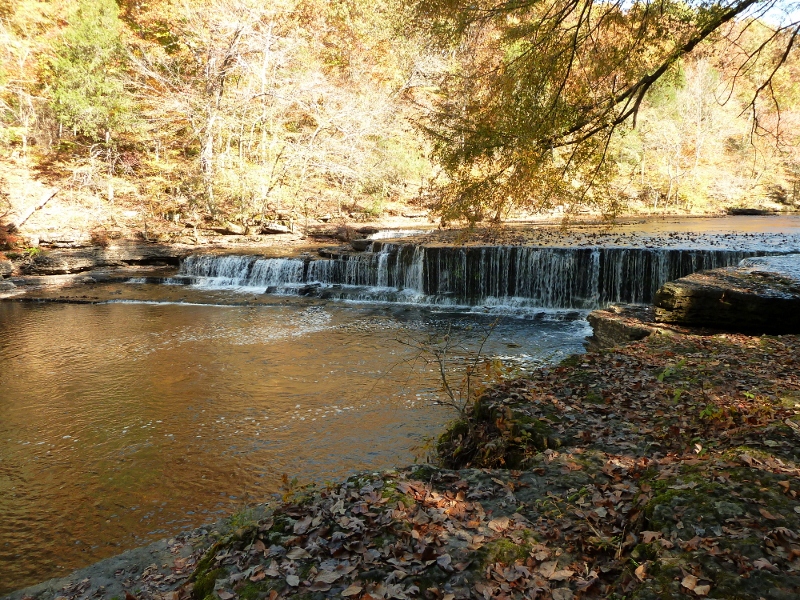 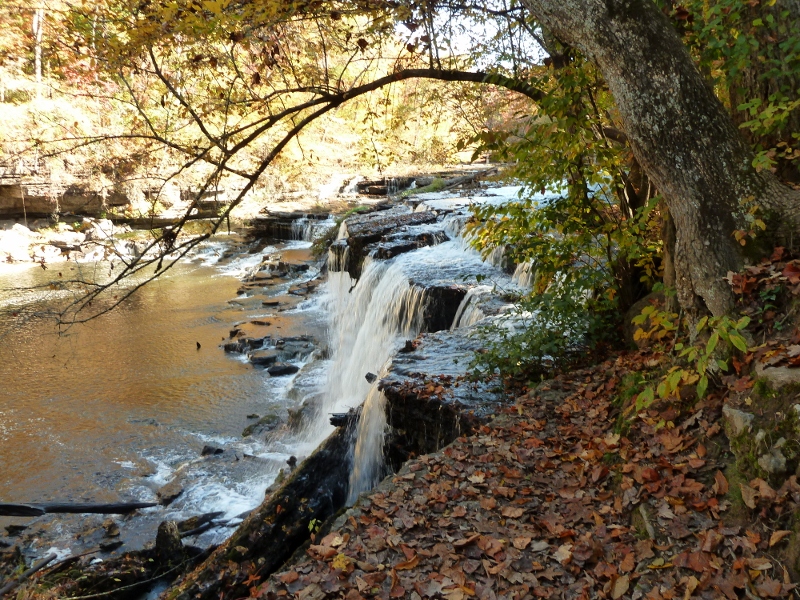 If you look around, you can find remains of factories from 150 years ago. 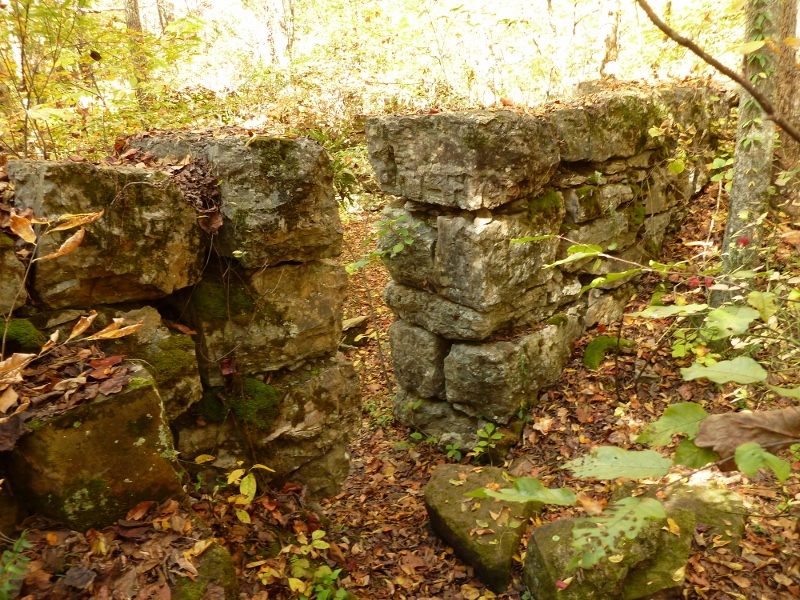 The nearby town of Manchester was named for the industrial British city of Manchester because the local settlers hoped that the potential power of water coming off the Highland Rim would create a major industrial center in this part of Tennessee. There is a slight problem with locating a factory on the edge of a river – floods and bigger floods. A catastrophic flood put an end to industrial development along the Big Duck River.

After finishing up at Old Stone Fort, I checked out an older edition of 60 Hikes within 60 Miles of Nashville by Johnny Molloy, and read about a location only a few miles away named Short Springs Natural Area. As mentioned in previous posts in this blog, hiking guides are a good source for wandering ideas. Old Stone Fort is also mentioned in the book.

With the directions to Short Springs in hand, we were on our way to find some more waterfalls. As we left Old Stone Fort we saw this curious sign just outside of the park. 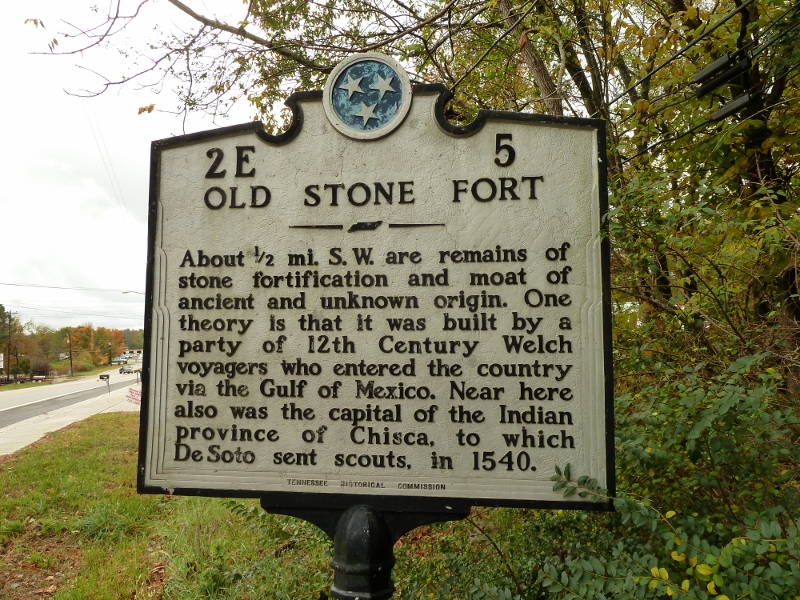 The Tennessee Highway Department obviously did not get the memo that Old Stone Fort is a Native American archaeological site. I’m not sure when this sign was erected, but it is a quaint reminder of how we once thought.

As we continued down the road we ran across this patch of Kudzu. 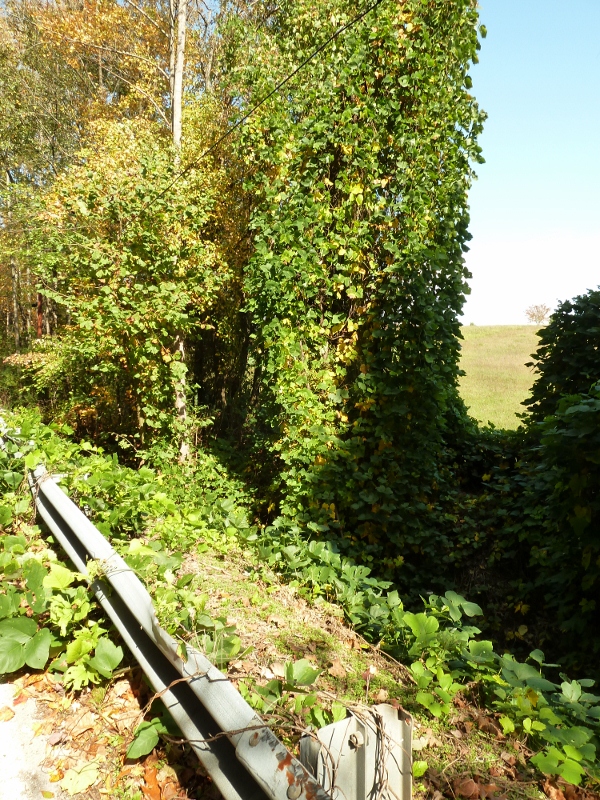 For those of you who have not been to the South, kudzu was introduced in 1876 to control erosion and is now everywhere. I have often wondered what creepy things live under the kudzu. Although we’re looking for waterfalls, a part of wandering is noticing the differences and kudzu is one of them.

Although it is not mentioned in the 60 Hikes book, the directions to Short Springs take you right past Rutledge Falls. When you reach Rutledge Falls Baptist Church, you’ll be making a right hand turn and will see this wooden fence on your right. 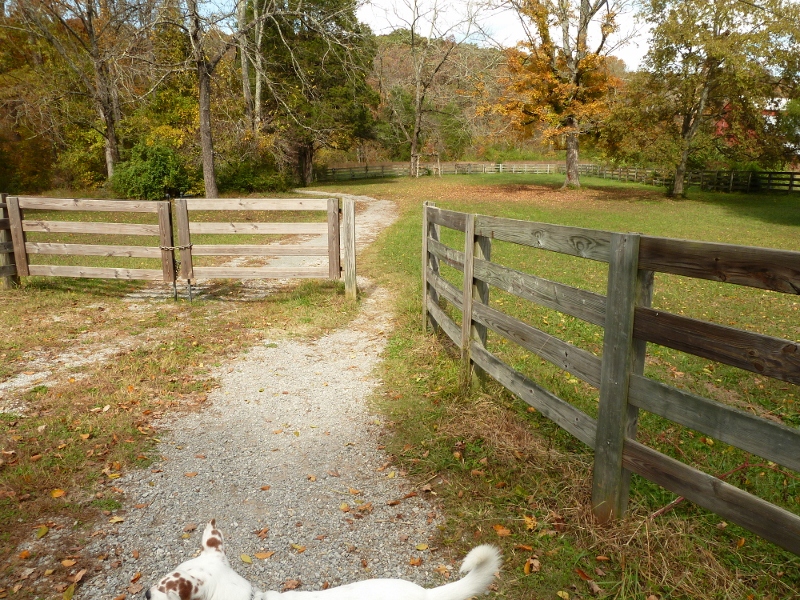 This is the path to Rutledge Falls. The falls are privately owned, but the owner allows visitors. The falls are towards the front less than a football field away. But you can’t see them or hear them until you are almost on top of them. But when you reach them they are spectacular. 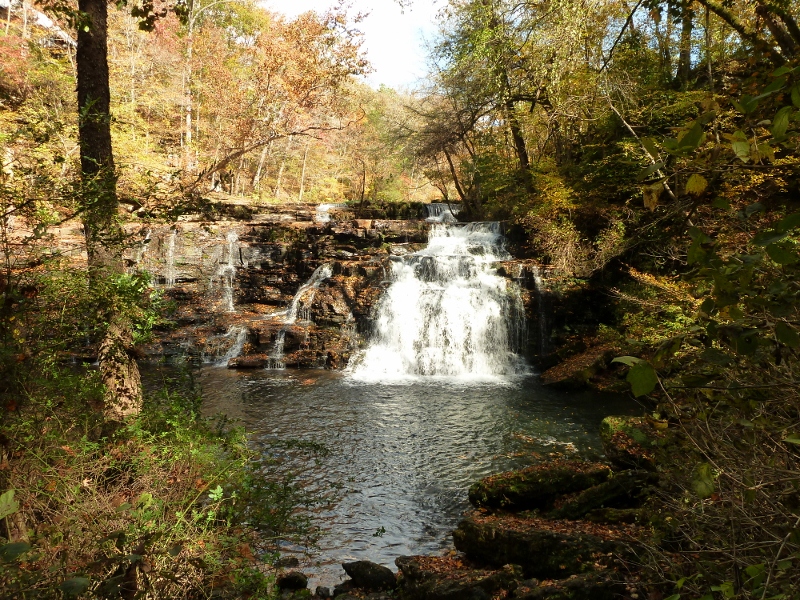 There’s even a little water nymph to share the falls with you. 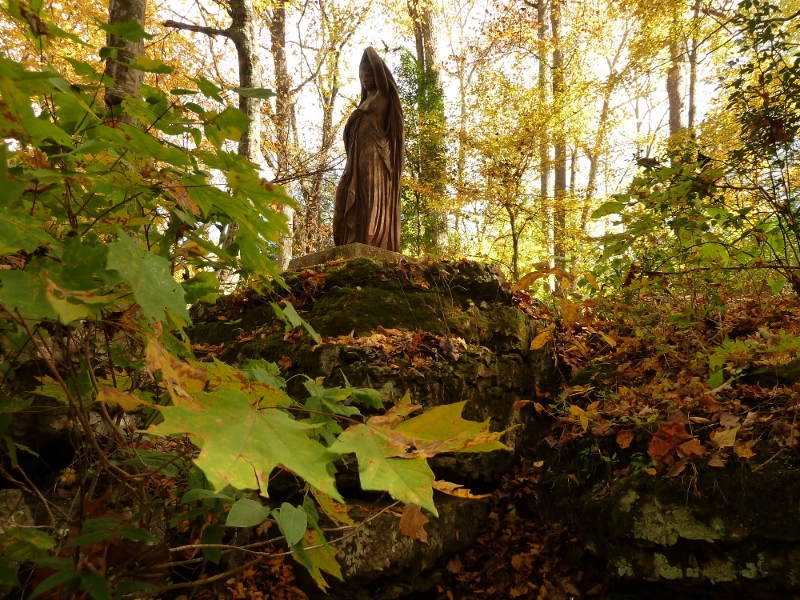 After checking out Rutledge Falls we drove three more miles to the Short Springs Natural Area. We parked the car and started walking on one of the many trails in the area. Very soon we noticed this puffball growing along the trail. 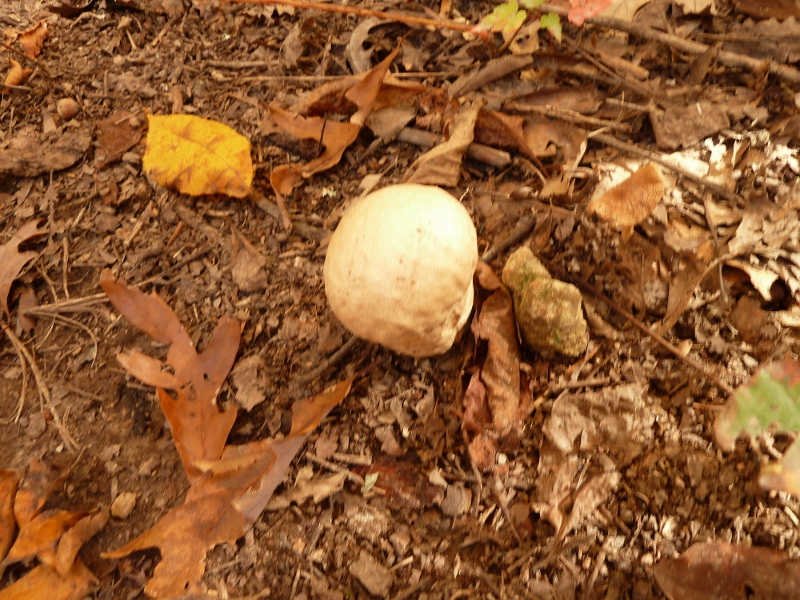 Part of wandering is noticing big and little things. And we soon came on to Busby Falls. 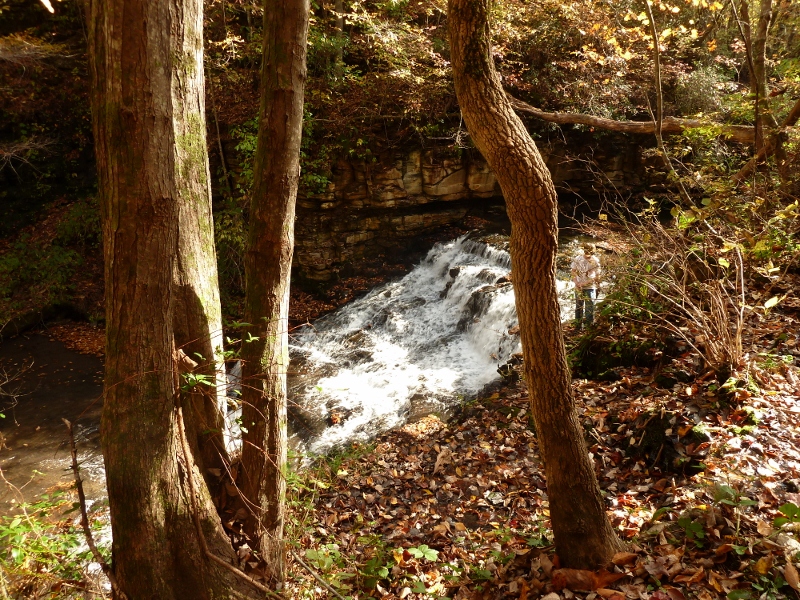 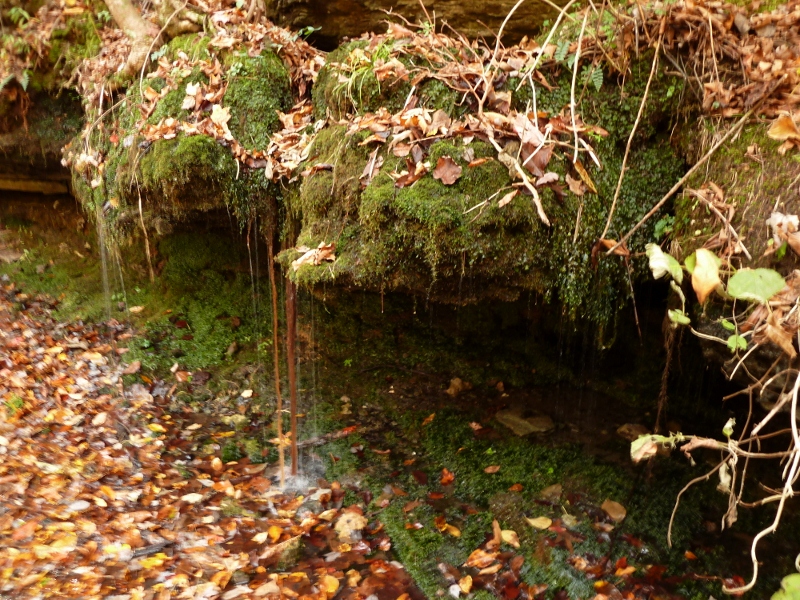 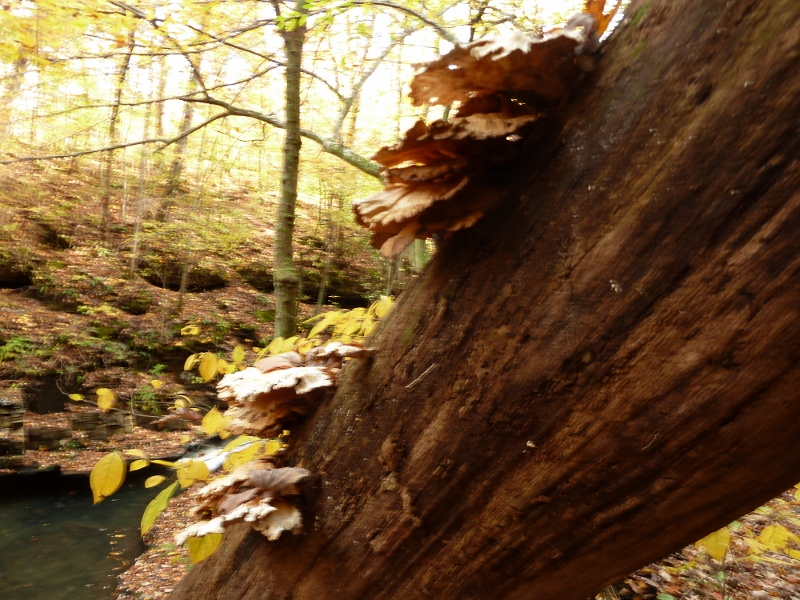 After exploring the Busby Falls area we continued on foot to nearby Machine Falls on a different creek. 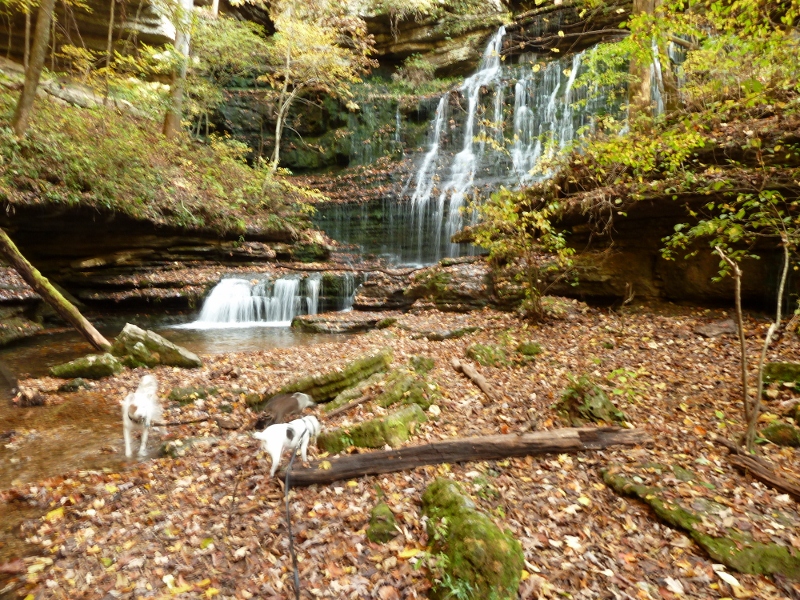 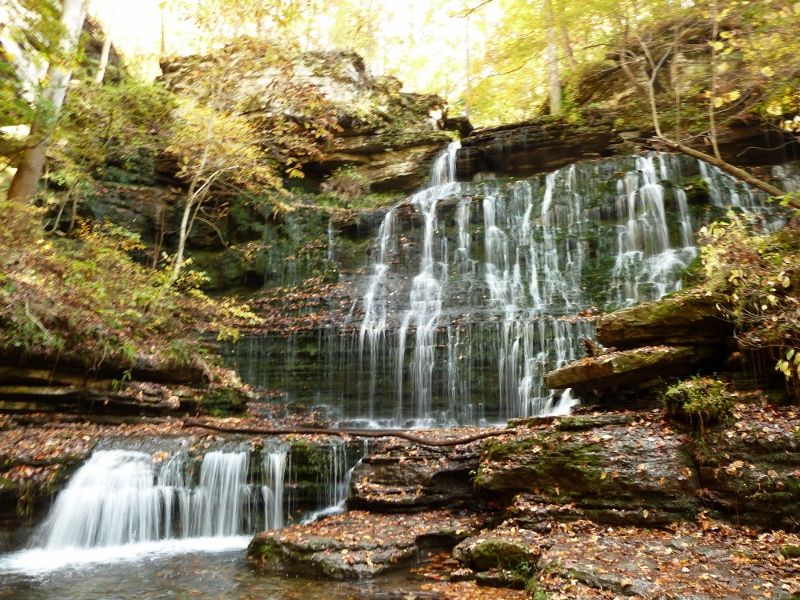 We waded through the creek to get a closer view of the falls, and they were awesome. We then continued hiking through the woods and eventually made it back to where we started. Just before we left the woods, I noticed this shrub or small tree with huge leaves – over twelve inches long. 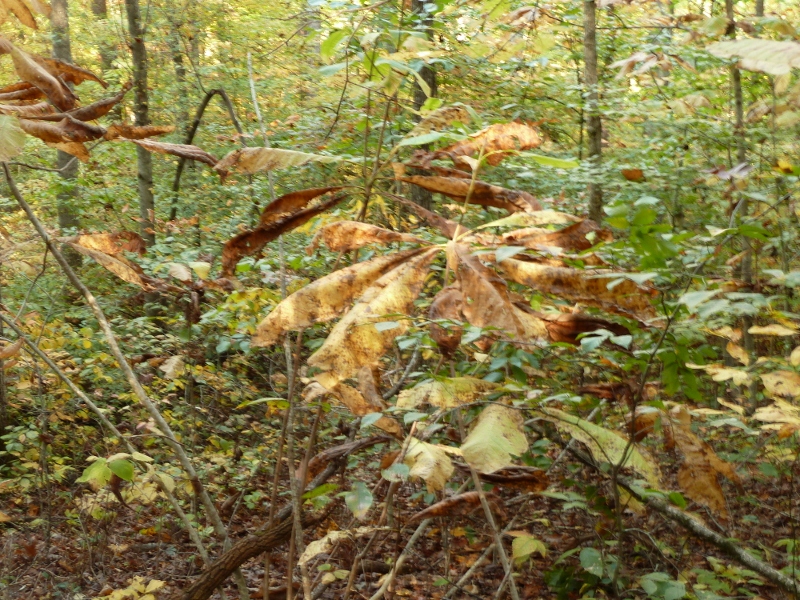 I have no idea what they are, but I thought they were an interesting way to end a fantastic day.

Again I think these blog posts have shown that you can find a great place to wander no matter where you are. If you live in this area, you could very easily spend the rest of your life exploring these watersheds coming off the Highland Rim. Waterfalls are not the only things to look for. When you have limestone, you have springs, sinks and caves to find let alone prehistoric and historic sites. All you need is a topo map and some curiosity to get started.