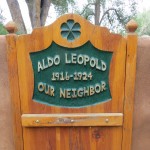 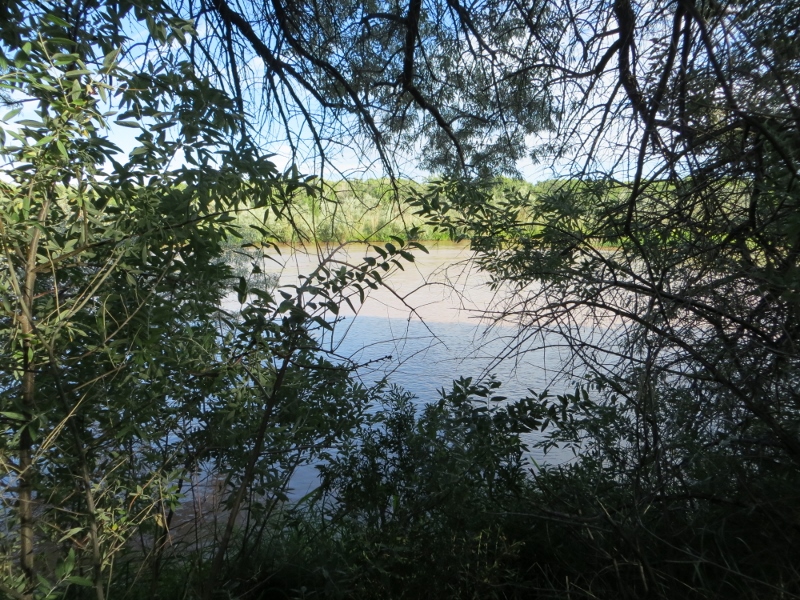 A couple of weeks ago the dogs and I were walking through the Bosque along the Rio Grande in Albuquerque. Bosque happens to be the Spanish word for forest and “the Bosque” is what the cottonwood forest along the Rio Grande in New Mexico is called. While walking we spotted a sign that told us that we were entering the Aldo Leopold Forrest and Trail. 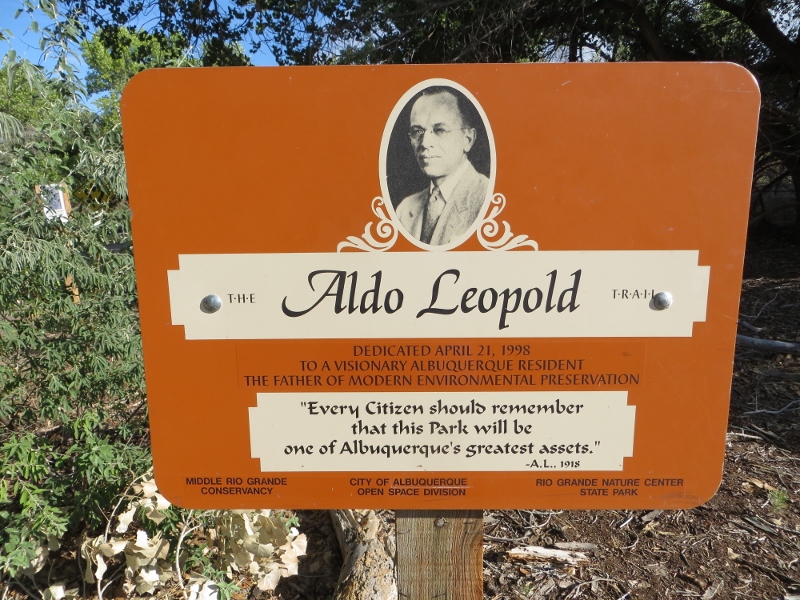 I was well aware that one of Aldo Leopold’s early Forest Service assignments was in northern New Mexico and that he was responsible for the creation of the Gila Wilderness in southwestern New Mexico. The Gila Wilderness was the first area in the country to be specifically set aside to be left alone without roads or development. Aldo Leopold believed that wilderness was vital to civilization and said in his essay, “The Green Lagoons” – Of what avail are forty freedoms without a blank spot on the map?

What I hadn’t realized was that exactly 100 years ago Aldo Leopold lived in Albuquerque and while here he was instrumental in having the Bosque, the very woods we were walking through, set aside and saved as parkland. We learned this from one of the many signs along the trail describing the accomplishments of his life.

One of the signs showed a picture of Aldo Leopold’s house in Albuquerque. The house location happened to be less than three miles from where we were standing. And needless to say I knew we had to check it out and see what it looks like today. 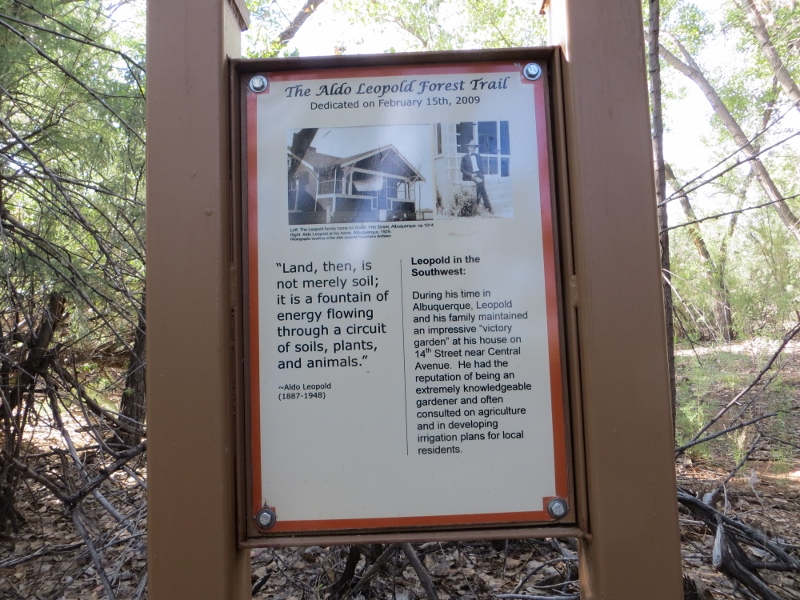 A basic principle of The Gentle Art of Wandering is that when you allow yourself to see, you will keep running into something that you’ll want to check out. When you wander, one thing always leads to another.

I did visit Aldo Leopold’s old neighborhood later in the day and found his house. It looked different than the picture along the trail. But then again what hasn’t changed in a hundred years. 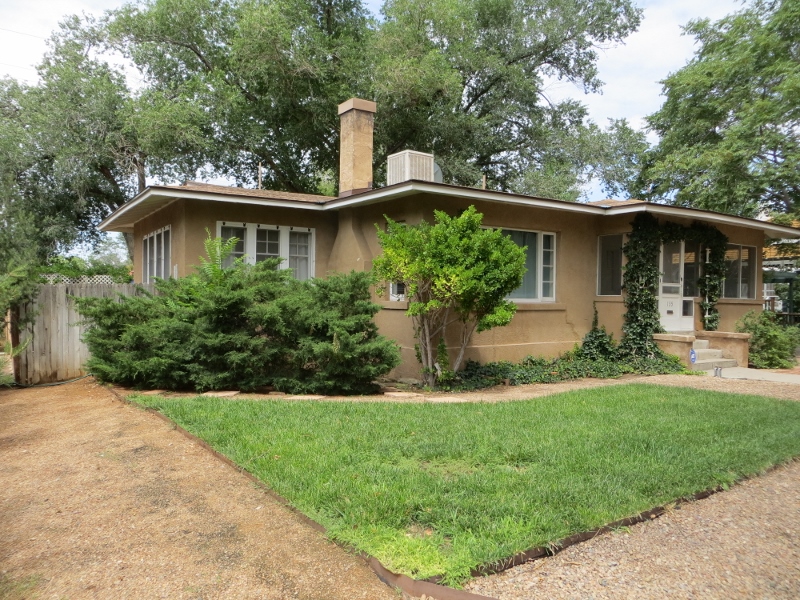 I then took a little walk. This too is part of wandering; while checking something out, see what else is around. And I noticed that the house next door is now called the Aldo Leopold Athenaeum. 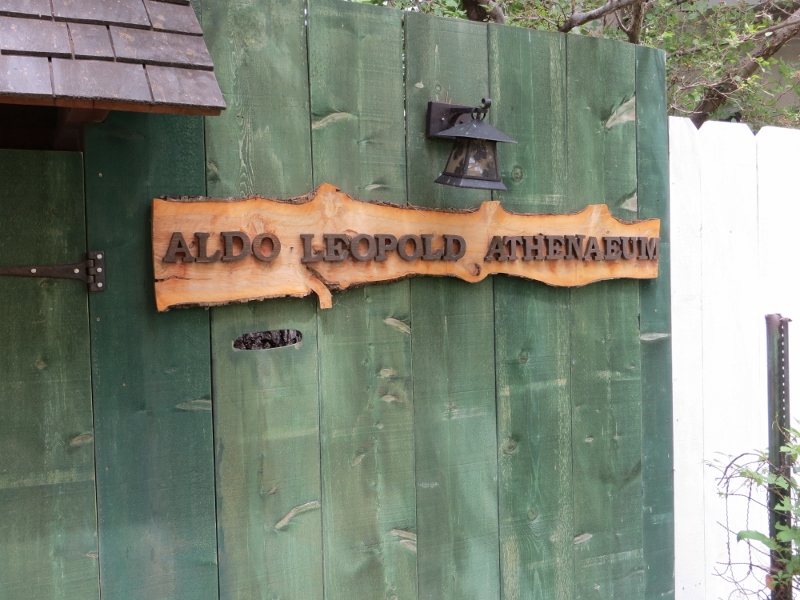 The house next door.

I saw some cars and called around but didn’t see anyone who could tell me about it. I noticed that the gate to the backyard was unlocked and went through it. Again I couldn’t find any information on the Athenaeum, but I did see that the gate leading to the backyard to the Leopold House said, “Aldo Leopold Our Neighbor, 1916 – 1924.” With one thing leading to another, I’ll have to go back to learn about the Athenaeum. 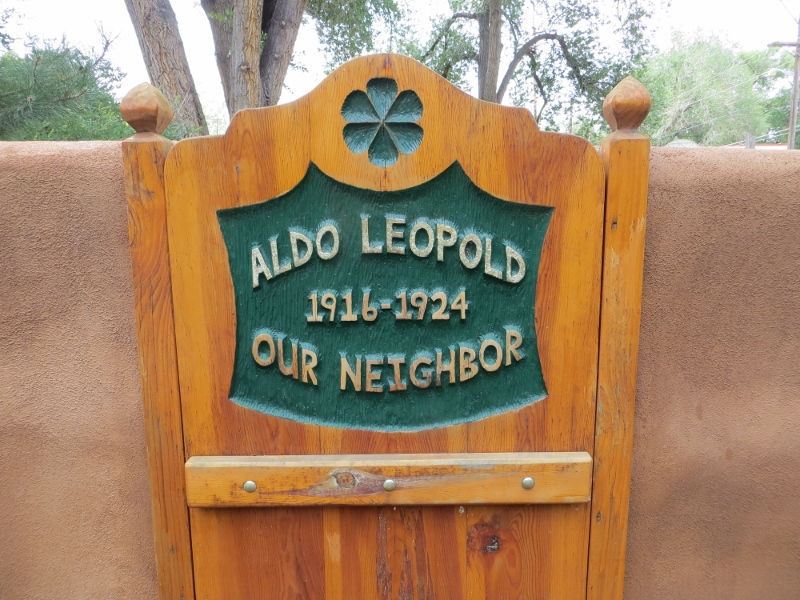 Aldo Leopold moved from Albuquerque to run the Forest Service Laboratory in Madison, Wisconsin. While living in Madison he bought an old farm in southwestern Wisconsin to fix up. His observations at the farm led to writing A Sand County Almanac. He finished the book just before he died in 1948.

His book is an incredible observation of nature and all that is around us. It is right up there with Walden. I personally consider A Sand County Almanac by Aldo Leopold, Pilgrim at Tinker Creek by Annie Dillard, and Desert Solitaire by Edward Abbey to be the three best books from the 20th Century about observing the natural world and our role in it. I keep all three books close at hand and have read them many times.

Ironically, two of the books have an Albuquerque connection. Like Aldo Leopold, Edward Abbey spent a significant part of his life in Albuquerque. Abbey went to the University of New Mexico in Albuquerque after he got out of the military at the end of World War II and continued to live in Albuquerque off and on for many years after college. Desert Solitaire, which describes a season in the wilderness, takes place in Arches National Park in not too far away Utah.

An earlier book by Abbey, The Brave Cowboy, is a modern day western loosely set in Albuquerque. Kirk Douglas bought the rights to the book and made it into the 1962 movie, Lonely Are the Brave. According to many sources, this was Kirk Douglas’ favorite movie. Considering Douglas’ impressive list of movies, this is a huge compliment.

The movie was shot in Albuquerque and in the nearby Sandia Mountains. Much of the movie centers on the Kirk Douglas character breaking out of jail and attempting to escape by riding his horse over the mountains. To film the mountain scenes the movie crew built a mountain trail in what is today the Sandia Mountain Wilderness. It’s called the Movie Trail and you can still hike it today. The trail is closed from mid-March to mid-August for wildlife protection. 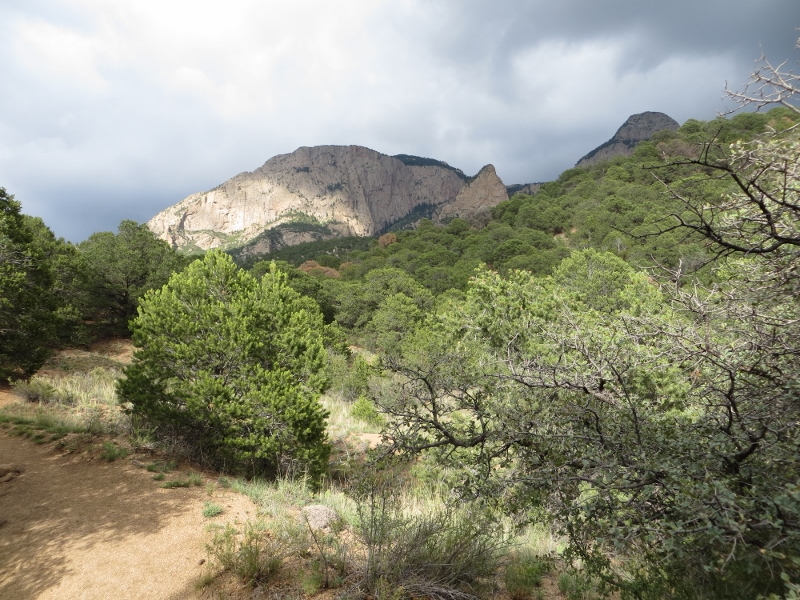 In the movie, Kirk Douglas rides his horse, with considerable difficulty, up and over these mountains. 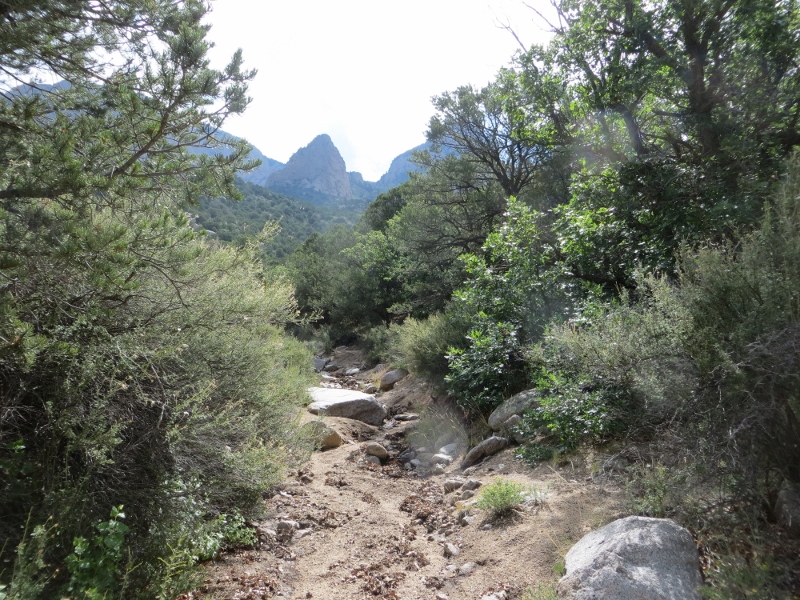 Until the wildlife protection is lifted on August 15, this about as close as you can get to the Movie Trail. As you can see, it would have been a very rugged route.

With one thing leading to another, I’ll have to come back and hike the trail when it reopens in a couple of weeks.