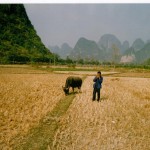 Most of the posts in this blog have been about some variation of walking. But when you have to cover a long distance, a bike ride can make your wandering adventure even better.

When Claudia and I reached the famous backpacker hang-out of Yangshuo, in the south of China, we found a completely different situation. To begin with Yangshuo is in the middle of the most scenic part of China with its karst topography of limestone peaks and spires. If you have seen a Chinese landscape painting, you have probably seen Yangshuo. There are not enough words to describe its beauty. 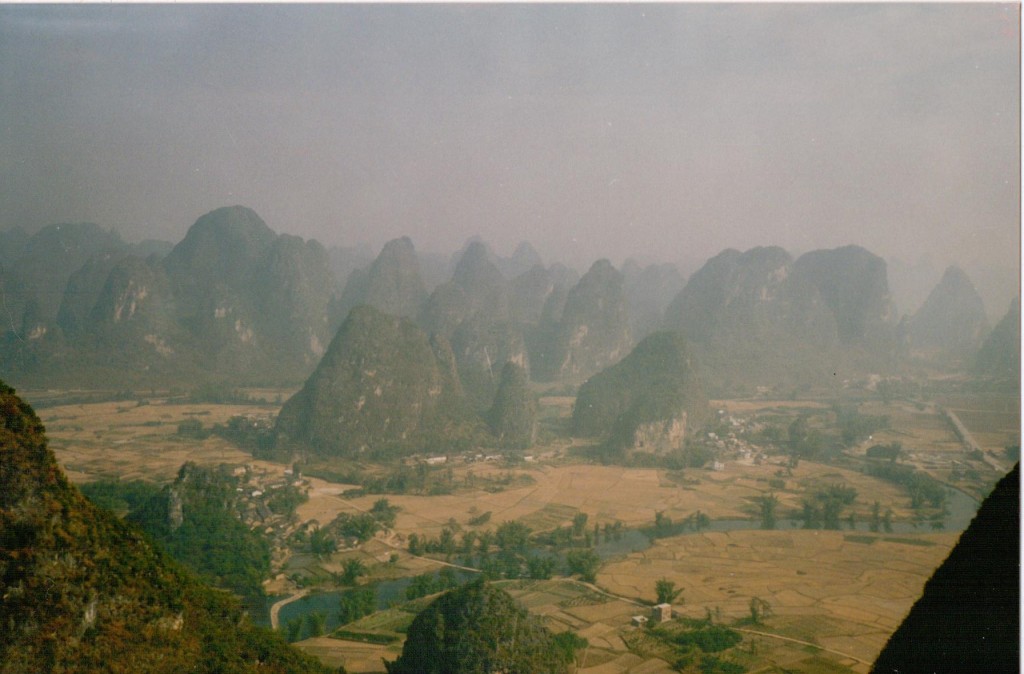 The limestone peaks and spires seemed to go on forever

Yangshuo was a very compact and walkable town. The narrow main street was paved with stone and lined with hostel-like hotels and sidewalk cafes. The cafes served a combination of Chinese and Western food, and when we arrived, every table was filled with backpack travelers from around the world. 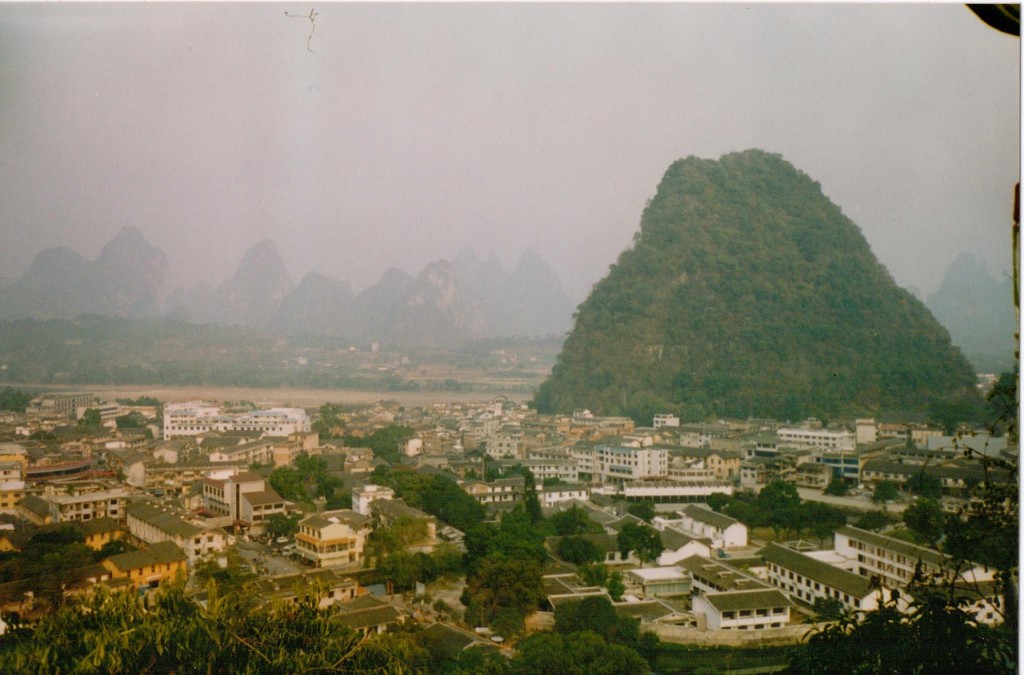 This is Yangshuo from the side of a spire 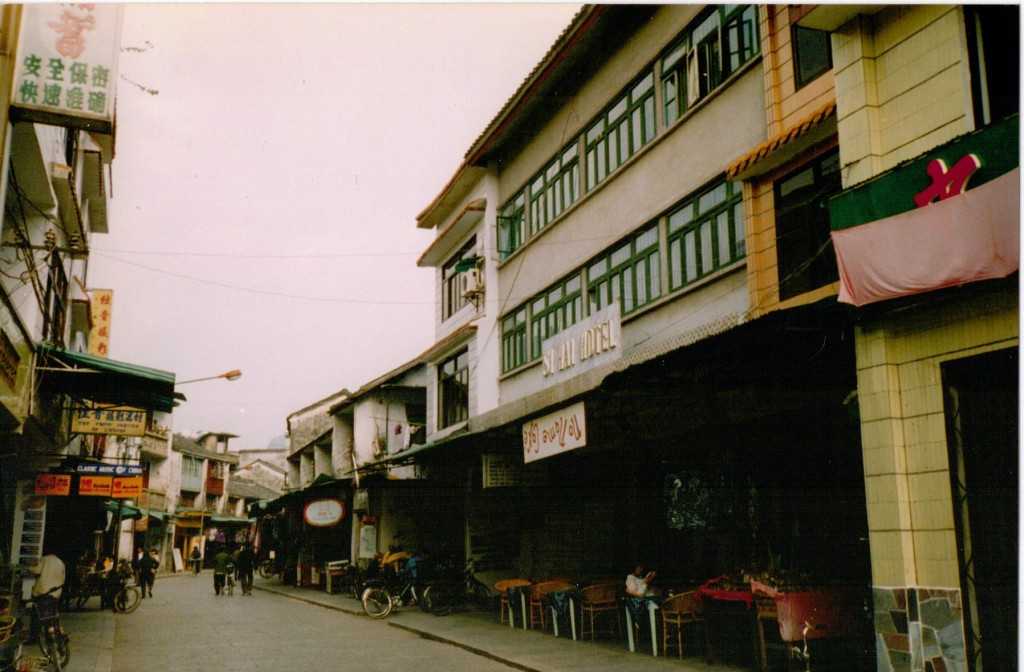 We stayed at this hotel right on the main street

When it got dark, the street was closed to traffic and the cafe tables were pulled out into the street. It was almost magical, like a scene from a movie. As a bonus, every restaurant offered a movie. You chose where to eat by what movie you wanted to watch. It was the first time that we ever saw a DVD. 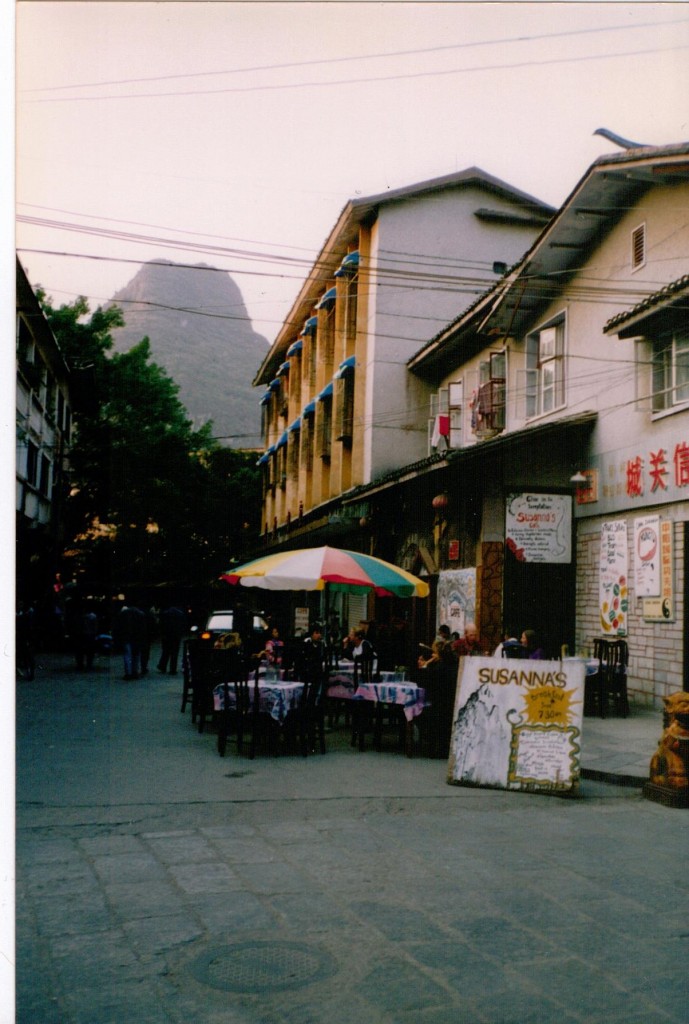 Just as we sat down, a young woman, Li, came up to us and asked us if we would like her to take us through the countryside on bikes for a fee. She did this to earn extra money to pay for her second child. Li even offered to take us to her house and cook lunch for us. That was an offer we could not refuse, and we agreed to meet her in front of our hotel the next morning.

The next morning Li was waiting for us in front of the hotel. Before getting started she took us to a place to rent bikes. Hard to believe but each bike cost only sixty cents to rent.

With our bikes rented, we were off, and what an incredible trip. We went past unbelievably gorgeous scenery. We passed rice paddies with water buffalo. We went to Moon Rock, which is a towering karst peak with a hole in the middle of it. We even climbed up to the top. Li even showed us a cave where her grandparents hid from the Japanese army during World War II. 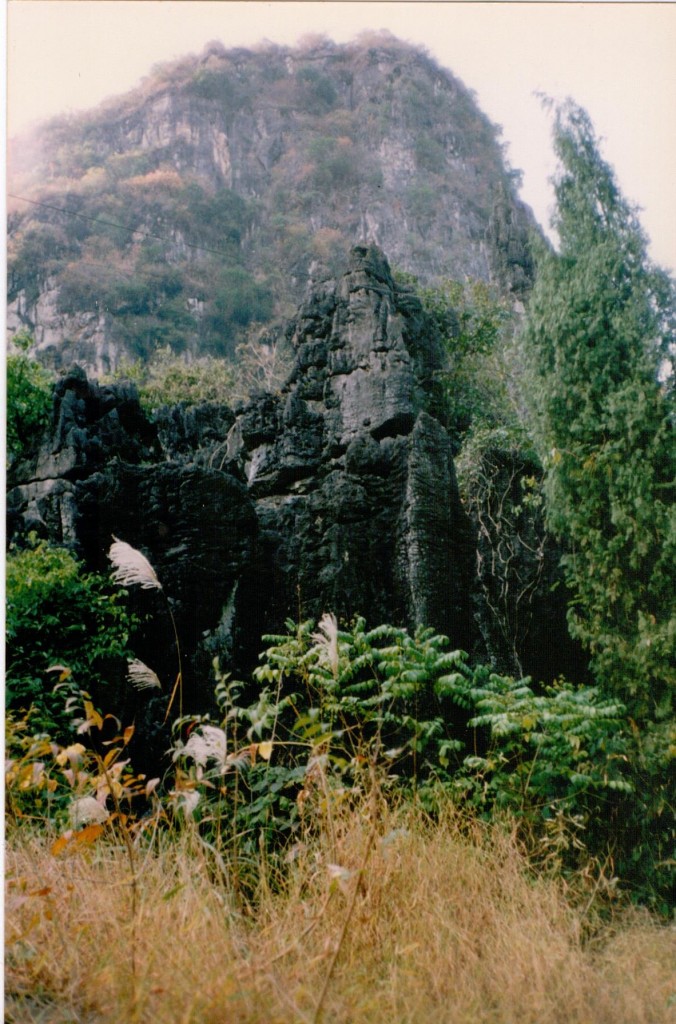 One of the many spires that we saw on our ride 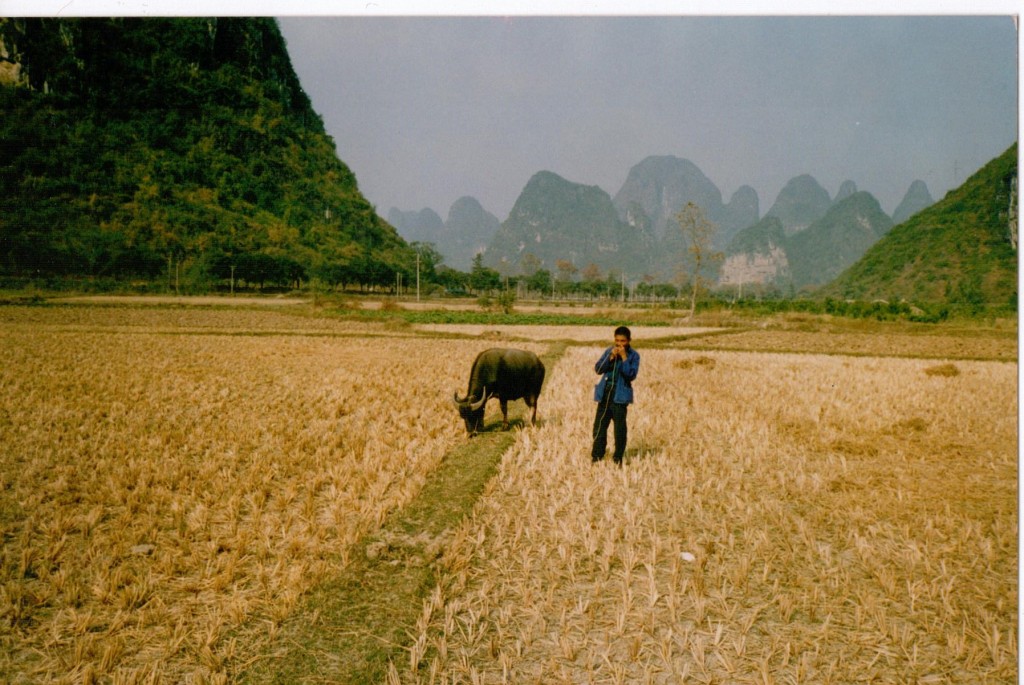 There were rice fields everywhere 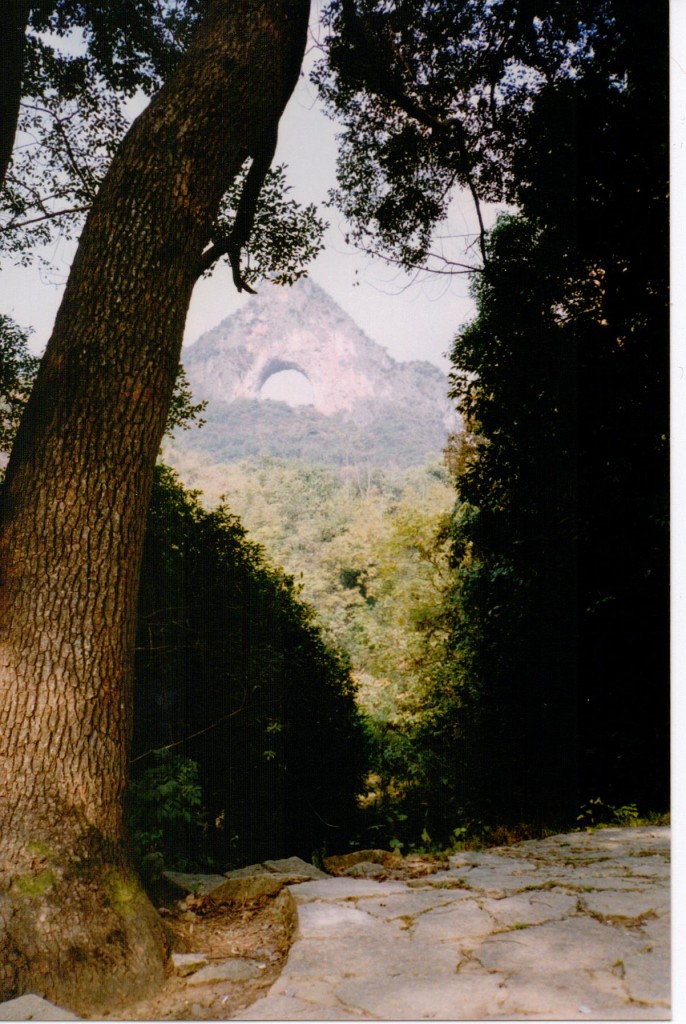 That’s Moon Rock in the distance; we were able to climb up to the hole 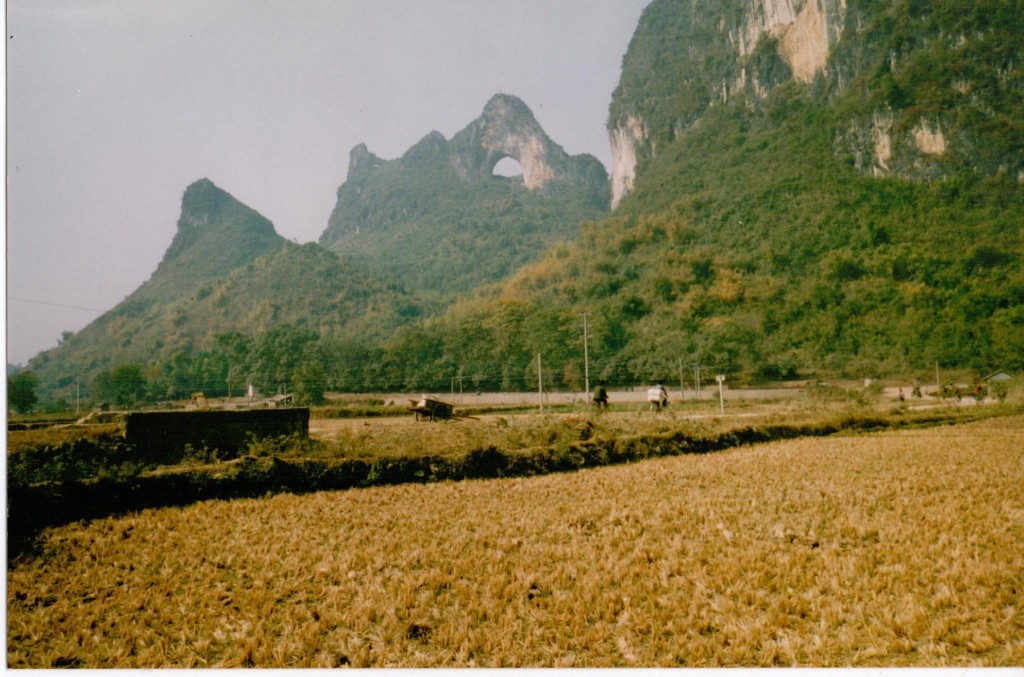 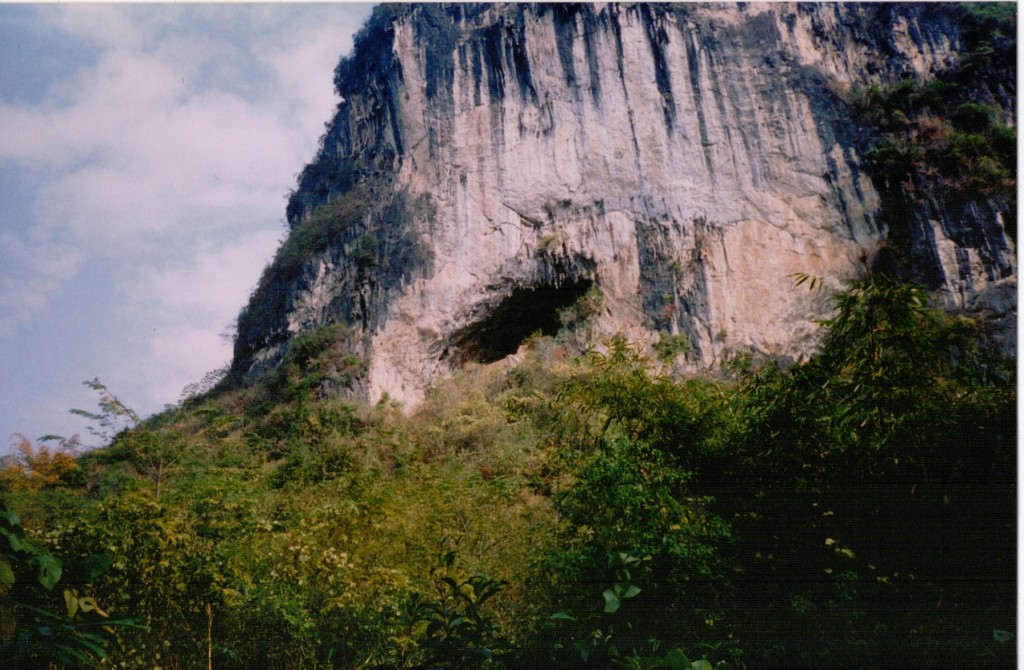 As we rode towards Li’s village, we passed small garden-like farm plots with every imaginable vegetable growing. We passed small ponds filled with ducks and pens full of chickens. We even rode over a snake squashed on the road.

Li’s village was a collection of traditional mud brick homes with clay tile roofs. Nearby was a new structure with white terra cotta walls. In 1996, China was a mixture of the old, the new, and the old being torn down to make way for the new. I wonder what it is like today. Has the new taken over? Or is the new now old and being torn down today?

Li had a traditional house with a couple of rooms and a packed dirt floor. I found it cozy. Li introduced us to one of her children and started making lunch. She heated up a pot of rice, cut up some vegetables and small bits of chicken, heated them all in wok, and served them piping hot. It was simple, filling, and delicious. 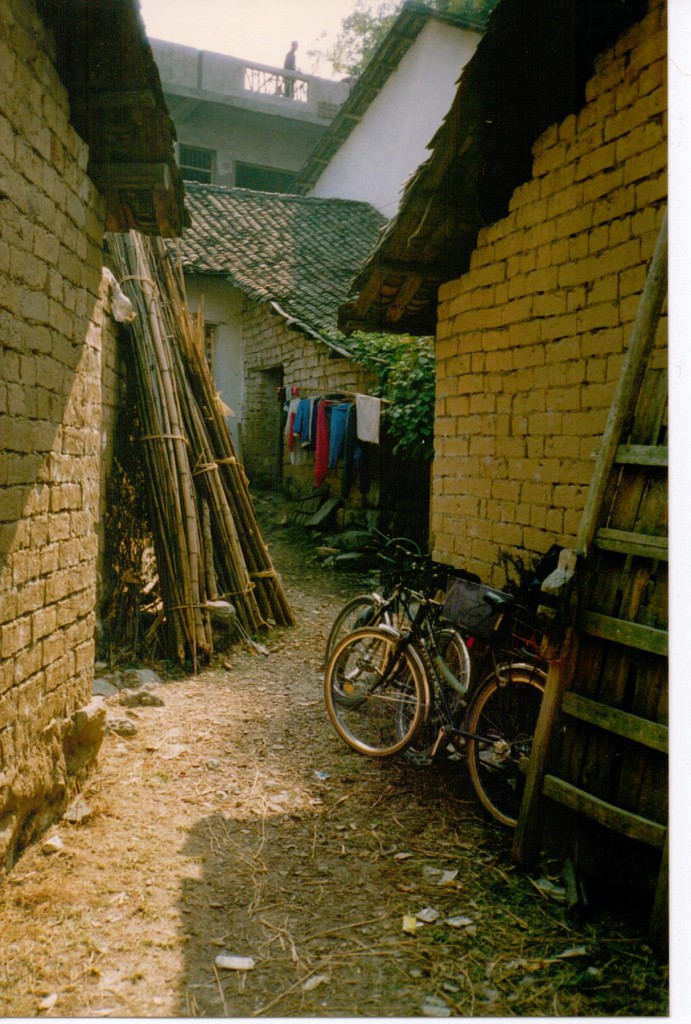 The entrance to Li’s house is where the clothes are hanging; you can see a new style building in the background

After lunch, we took a different route back to Yangshuo. On this leg of the journey we rode our bikes over rice that been spread across the road. Farmers do this to dry their crop and to let the action of wheels separate the husk from the grain. Li even got off her bike to rake the rice with a wooden rake. 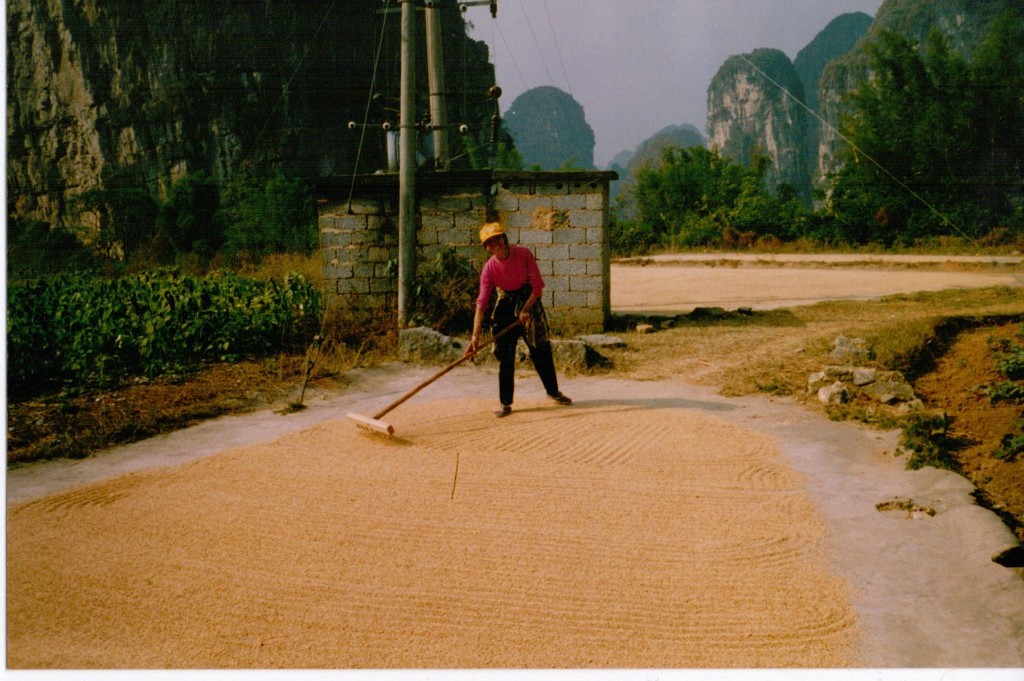 Li spreading rice on the road with a wooden rake 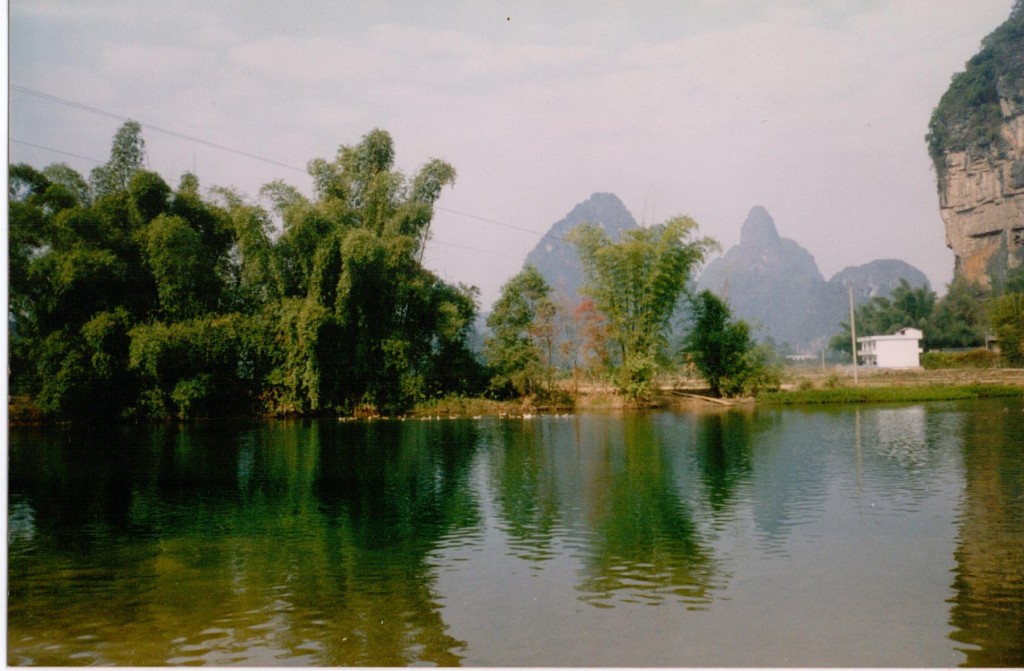 On the way back to Yangshuo

When we got closer to Yangshuo, Li pointed us in the right direction, and we said our good byes. We soon made it back and returned our bikes to complete a perfect adventure. This is the China that I had always wanted to see, and it could not have been done without a bike.