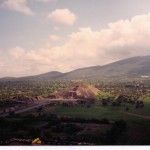 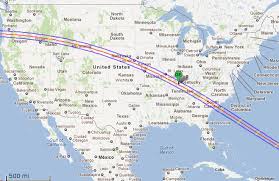 For my first eclipse, my daughter Jennifer and I drove with a friend of mine and his two kids to Manitoba, Canada for the 1979 eclipse. We watched the eclipse from the middle of a frozen lake north of Winnipeg. It was cold but the skies were clear and we had an unobstructed view.

There were many other people near us and several of them were setting up very expensive telescopes and camera gear. The energy was amazing. Complete strangers invited us to look through their telescopes to check out the progress of the eclipse and to see all the spots on the sun. Had one of us accidentally knocked over one of their scopes, I am sure the repair costs would have been in the hundreds of dollars.

It was as if we were all colleagues sharing a rare and special event together. It was a relaxed community without a hint of competition or one-upmanship.

As the moon covered more and more of the sun, the sky and air began to change. The light was turning to an indigo blue and the animals began to act strange.  Birds were returning their roosts. Dogs sensed something was different and were not sure of what to do.

As it got darker, everyone hushed and began to pay attention. The moon’s shadow was racing towards us at over 1000 miles per hour from the southwest. It was like an incredibly dark cloud swallowing up the light. In the sky we could see the last glimmer of sunlight shining through the gaps of a mountain range on the moon. It was like a string of beads in the sky. (This phenomenon happens to be called “Bailey’s beads.”) It was fantastic!

Then totality! It was as if someone turned off the lights. It was an eerie darkness. There was still light in the far off distance. But above us the stars were out; the corona of the sun was shimmering in all directions from the eclipsed sun; red flares from solar prominences were shooting into the sky. It was unbelievable!

On the ground it was complete pandemonium! All of us were taken over by forces beyond our control. We were all jumping up and down; hollering and screaming “oh my god, I can’t believe this”; clapping; and whooping it up.

And then in the middle of this excitement a tiny corner of the sun peeked out beyond the moon’s path. It was a burst of light that looked like a diamond ring in the sky, and without surprise this phenomenon is called the “diamond ring effect.”

Totality was over and the lights had been turned back on. Even though it would be quite some time before the moon completely cleared the sun, the main event was over. Without knowing why, everyone went around shaking everyone else’s hand congratulating each other on a great eclipse. We all knew that we had shared something special and reluctantly realized that it was now time to head back to everyday life.

That eclipse was the most amazing thing I have ever experienced and it has changed my life forever. It confronted me with the fact that I have nothing to do with how the world works and that my life and everything around me is a gift to love and appreciate. And all I can do is say thank you.

Every other eclipse I have witnessed has been just as wonderful! For my second eclipse, my daughter Amy and I traveled to Mexico for the eclipse of July 11, 1991. On the morning of the eleventh we drove to the archaeological site of Teotihuacan north of Mexico City. We got there early enough to secure a viewing spot on top of the Pyramid of the Sun. We were one of the first ones there. 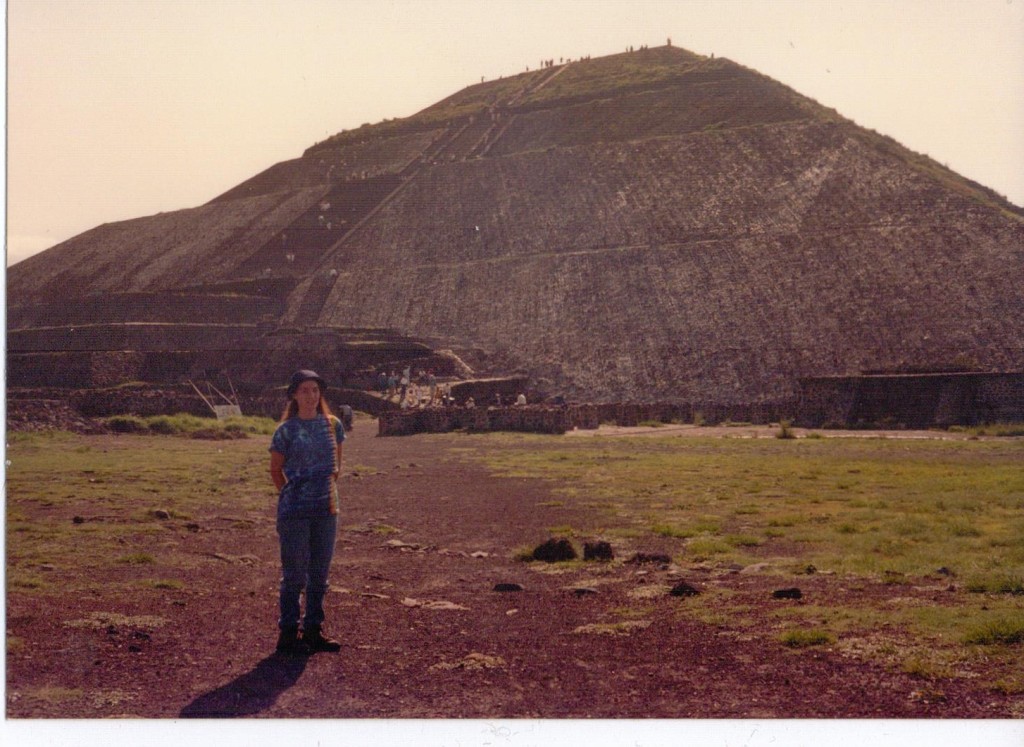 Here’s Amy standing in front of the Pyramid of the Sun. We climbed to the top for our viewing spot. 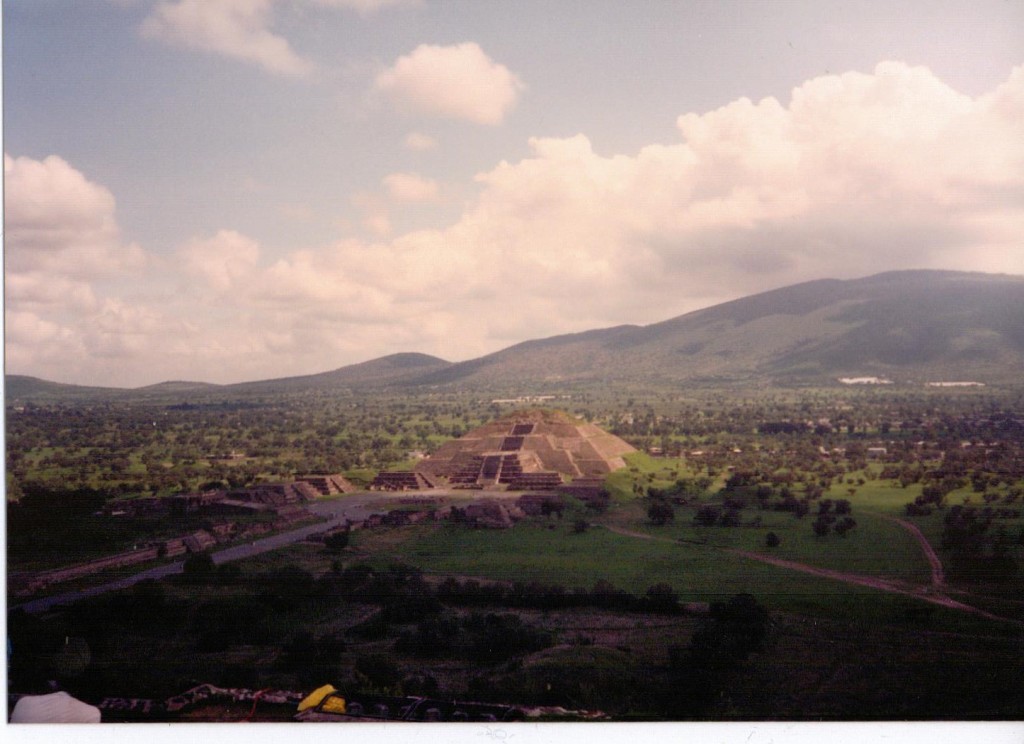 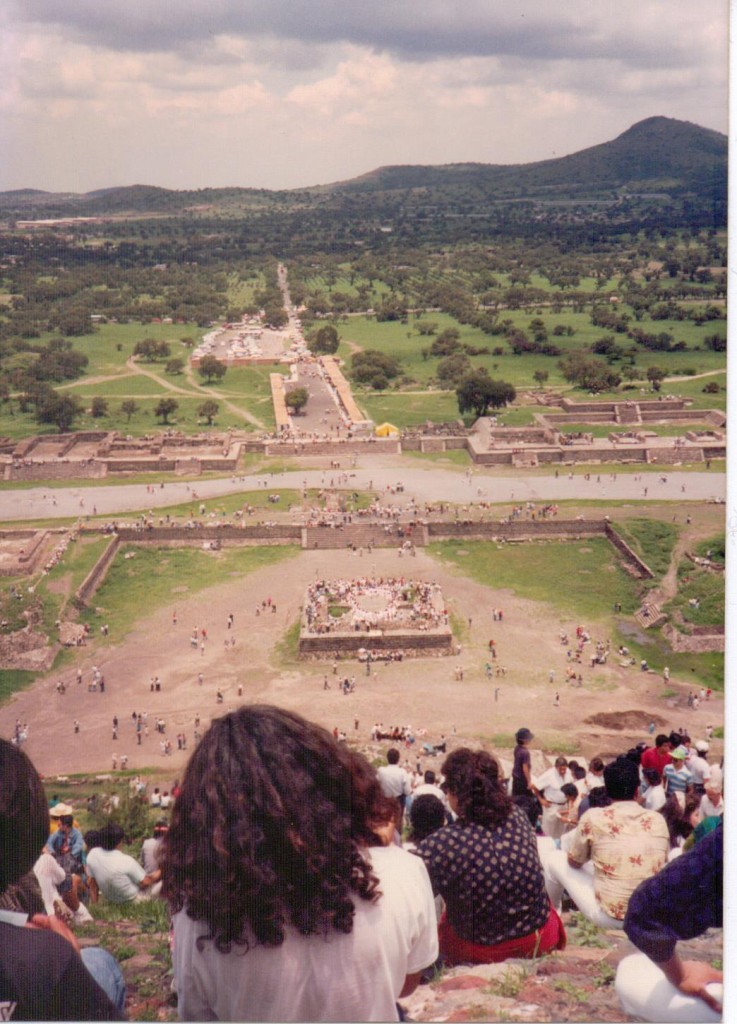 More and more people showed up as we got closer to eclipse time.

As it got darker and darker, the lights of Mexico City came on in the far distance. Closer to us on the nearby roads drivers turned on their headlights. It also became very cool. It was so cool that the atmosphere was disturbed and clouds started to form. Right at the moment of totality, a light rain started. And just as quickly as the clouds and rain appeared, they vanished even faster when the sun reappeared. 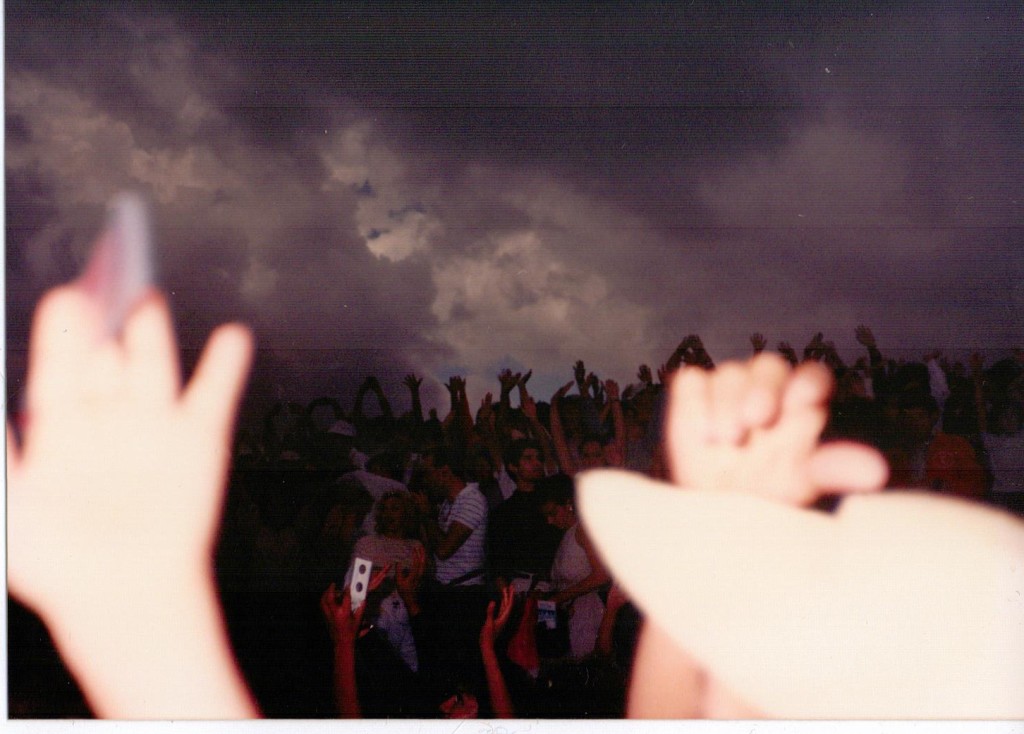 Darkness at noon and the chanting continued!

Although we missed the some of the details of main event because of the rain, the eclipse was still fantastic! I was so filled with energy that for some reason I ran up and down every pyramid in the Teotihuacan complex. I still don’t know why I did it, but it felt great to do it.

For my third total eclipse, my wife Claudia and I traveled to Venezuela. On the morning of February 26, 1998, we drove out to a peninsula jutting into the Caribbean near Coro, Venezuela and perched ourselves on a beach to watch the eclipse. 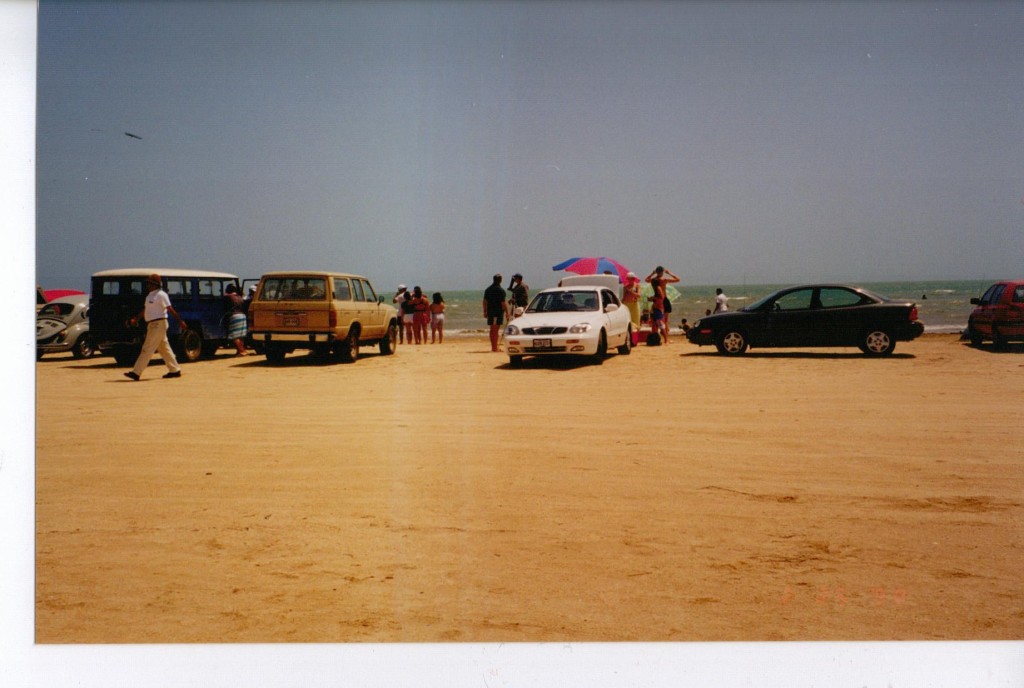 Finding a place on the beach to watch the eclipse.

Again it was pandemonium on the ground and spectacular in the air. This eclipse had the added treat of a windsurfer gliding back and forth a hundred yards off the shore during the entire eclipse. 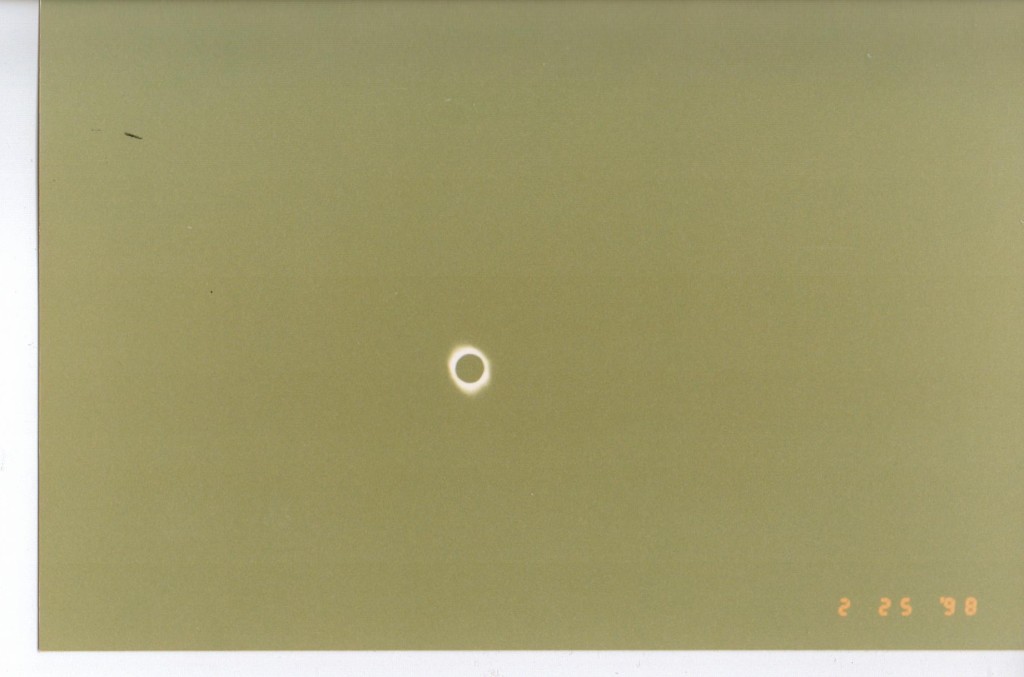 Totality in Venezuela! The light around the sun is its corona. This picture doesn’t come close to being there in person.

Although they are less spectacular than a total eclipse, an annular eclipse is also great. On May 10, 1994, Claudia and I watched one from Lincoln’s New Salem Village near Springfield, Illinois. New Salem is a restored 1830s village where Abraham Lincoln lived as a young man.

As an added touch for this eclipse, we watched it in the middle of a farmyard. As the eclipse progressed, the cows came in for the night, the roosters went ballistic, and other animals started to bay and walk in circles. We were also near some trees and the leaves acted like eclipse projectors. There were thousands of eclipse images on the ground. They were like eclipse polka dots.

There is nothing like an eclipse! No amount of pictures or Youtube videos can convey its magnificence. This is something you have experience in person. And once you experience it, it will be imprinted within you and you will be compelled to view another one whenever possible.

So please, do whatever it takes to participate in the eclipse on August 21, 2017. Decline invitations, postpone going to school or taking a class, put in for vacation time, or quit your job if you have to! You’ll be glad you did. And if you miss this one, you’ll get another chance on April 8, 2024 when the next eclipse crosses the 48 States.

If you do view this eclipse, there are a few basics to consider:

The eclipse will contact land on the Oregon coast and exit it on the South Carolina shore. (Click here for a link with eclipse times and durations.) When choosing a viewing location, consider the likelihood of cloud cover and bad weather. Also be prepared to drive to another location if there are weather problems. 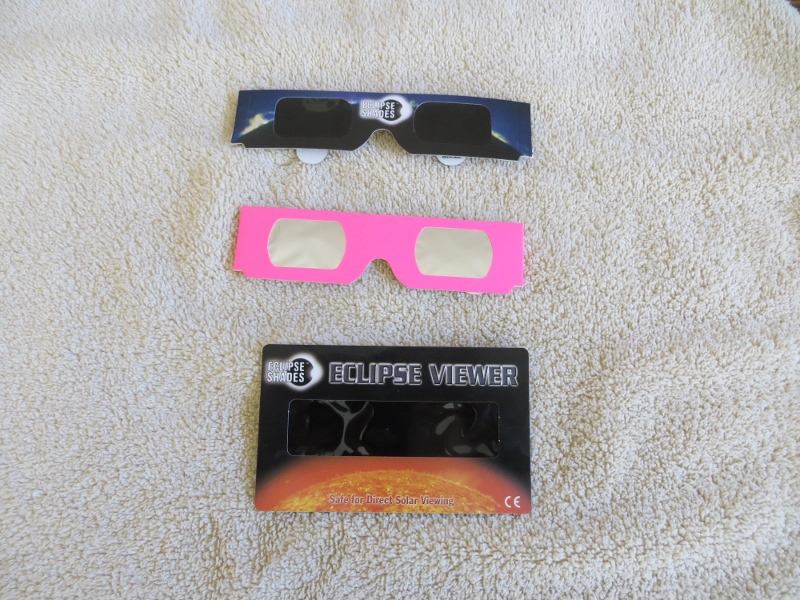 And finally, I hope this blog post has given you enough warning so you can experience a rare and wonderful event. Thank you.