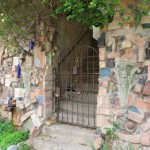 My dog Petey and I returned to Bisbee, Arizona to get more information for the Bisbee stairway guide that I have been working on for the past three months. And it’s a good thing we went back because we found some new (for us) stairways and many, many things we hadn’t noticed before.

The Bisbee project has been like peeling an onion without a core. There’s been no end to the layers and no end to all there is to find when you wander in Bisbee. I’m betting I’ll make new discoveries long after the book is done. But that’s why Bisbee may be the most interesting small town in America.

In my many walks, I have talked to many people who told me that they have lived in Bisbee for thirty-five years and they are still making new discoveries. In a meeting with Andy Haratyk, the City of Bisbee’s public works operation manager, he told me that he tries to climb every stairway once a year, but he can’t. He keeps finding ones that he never saw before.

For example, when I photographed a stairway to use as an example of one I would not describe in the book because it only led to one house, I noticed a walkway near the house. When we went down to check it out, we found that the stairway continued on to two more levels of houses. When we reached the end, we came upon a sidewalk that connected this particular stairway to four other stairways. We’ve truly been walking in a wonderful maze, and this 60-step stairway is now in the book. 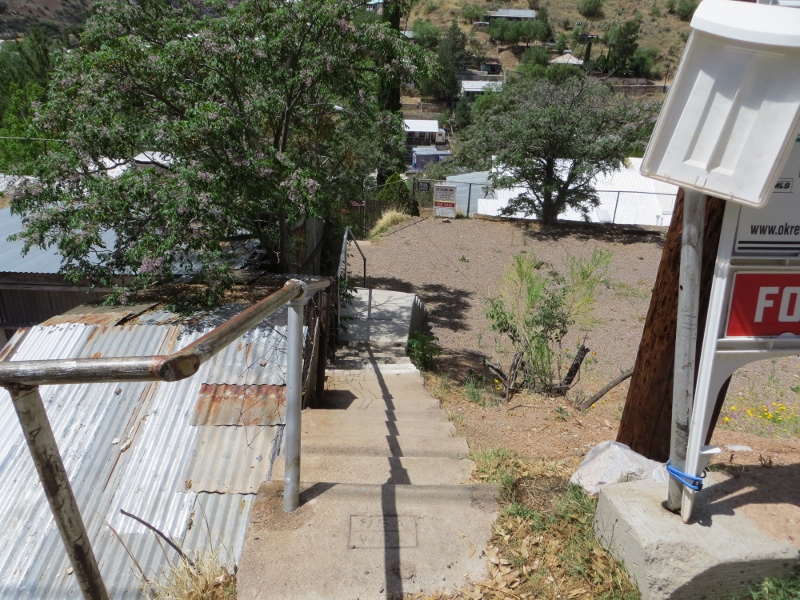 It turns out that this stairway kept going beyond the house in front of us.

While walking back to the car, I decided to check out another stairway. I thought that it too only went to one house. Again I was wrong. By taking a closer look we found a 76-step stairway with several twist and turns leading to a sidewalk that connected it to other stairways. As a bonus, we passed an amazing house with incredible Polynesian or African type sculptures filling the yard. 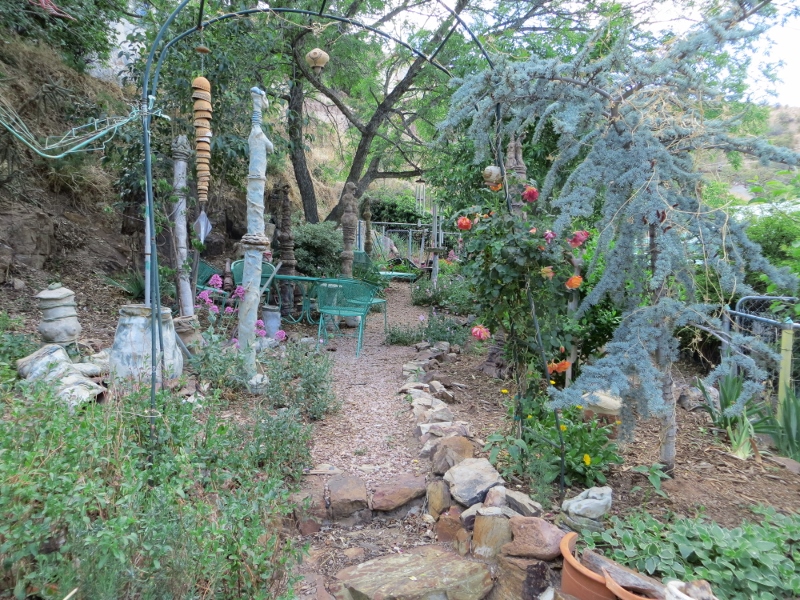 This picture doesn’t do this yard justice. The statues are amazing.

While checking out a path to see where it ended, we found a hand-made stairway at the end that led down to a man-made cave. The cave is now a Buddhist shrine complete with prayer rugs and statues. It was wonderful. Just as wonderful was that the hand-made stairs led another stairway that we hadn’t seen before. That stairway led to a sidewalk that connected it to stairways that we already knew about. 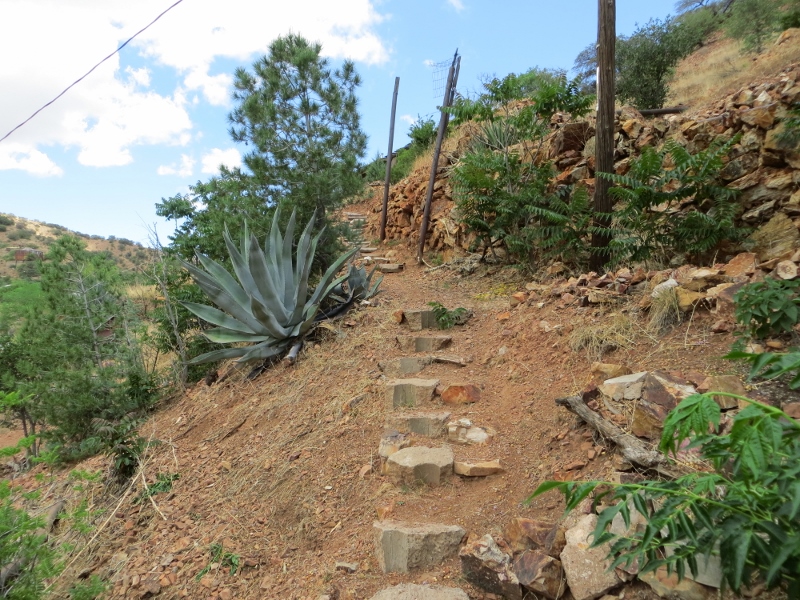 These are the hand-made stairs leading to the Buddhist shrine. 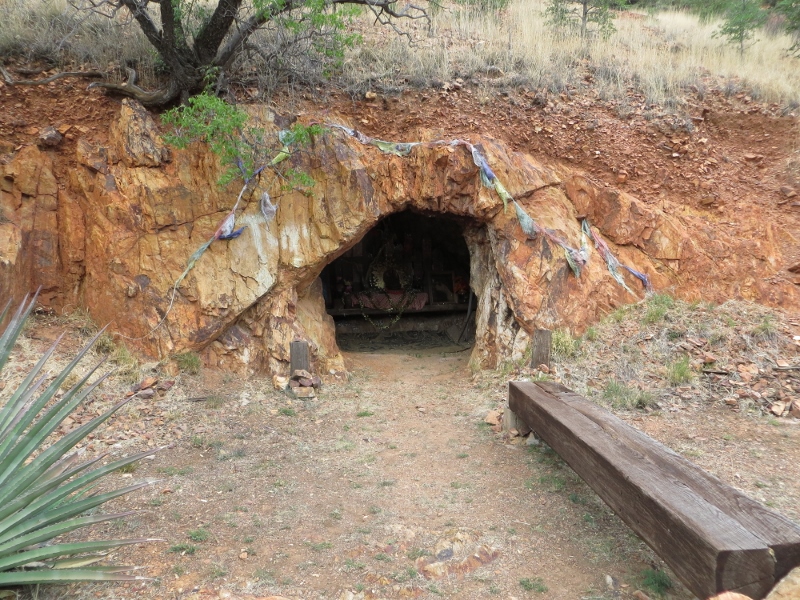 This is the cave complete with a bench for sitting outside of the cave. 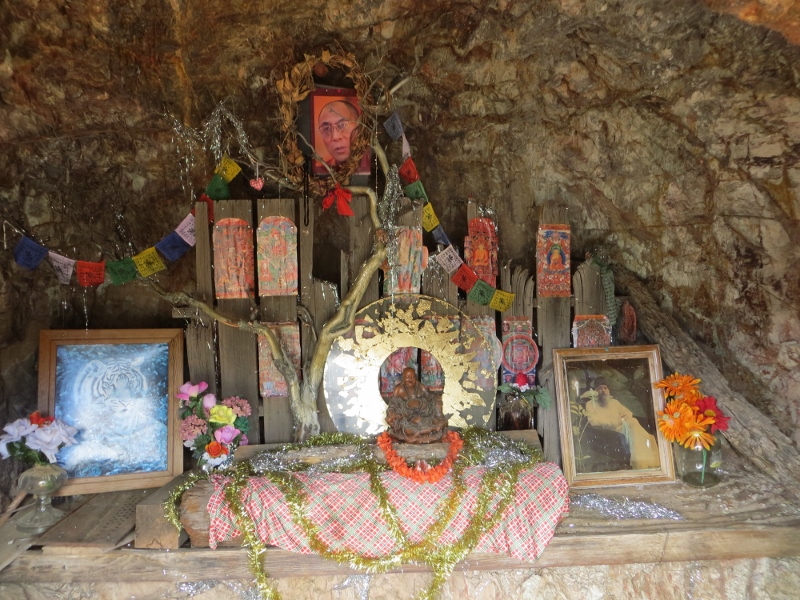 This is the inside of the cave. I’m not sure that this picture does it justice. 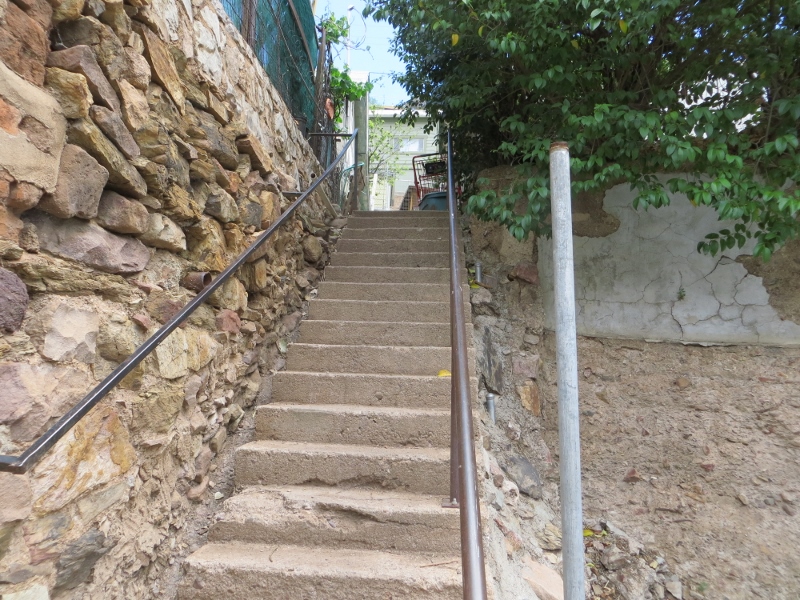 This is the stairway we found that connects the cave to a network of other stairs.

Every day of this trip was filled new and exciting items. Some of them are shown below. 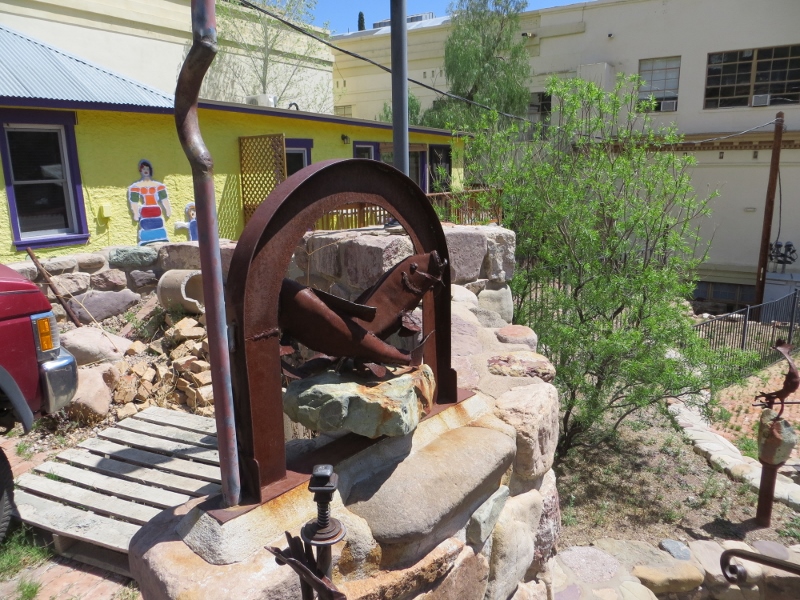 While walking around we noticed this interesting fish gate. 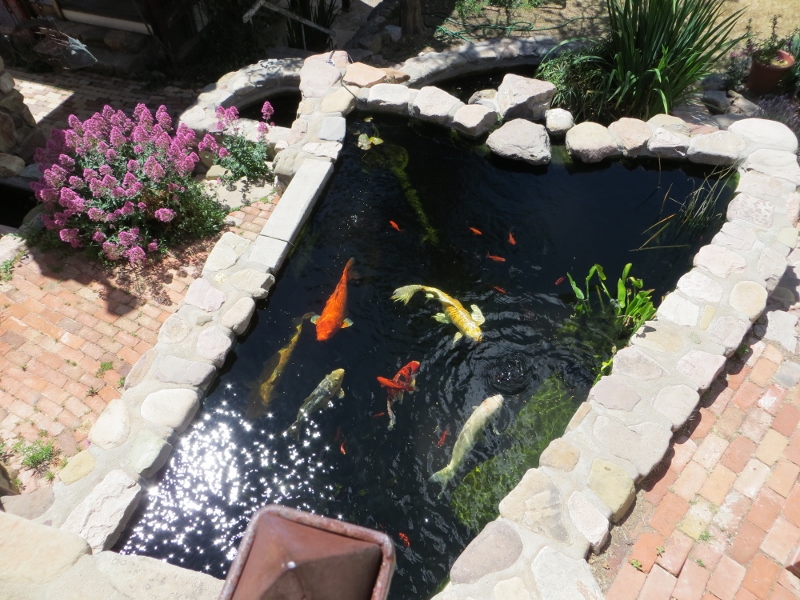 When we looked over the wall, we saw this Koi pond. The pond’s builder invited us come down a stone stairway he built to get a closer look. 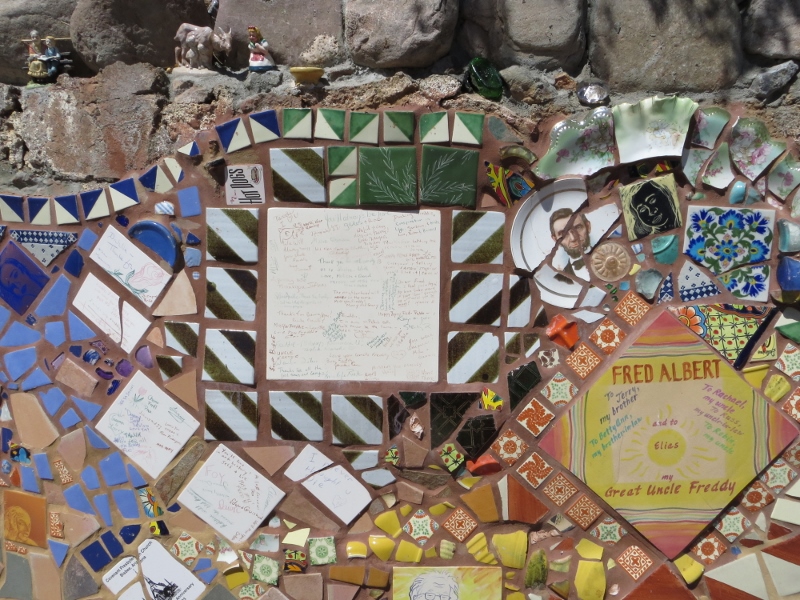 This wonderful wall is just around the corner from the Koi pond. 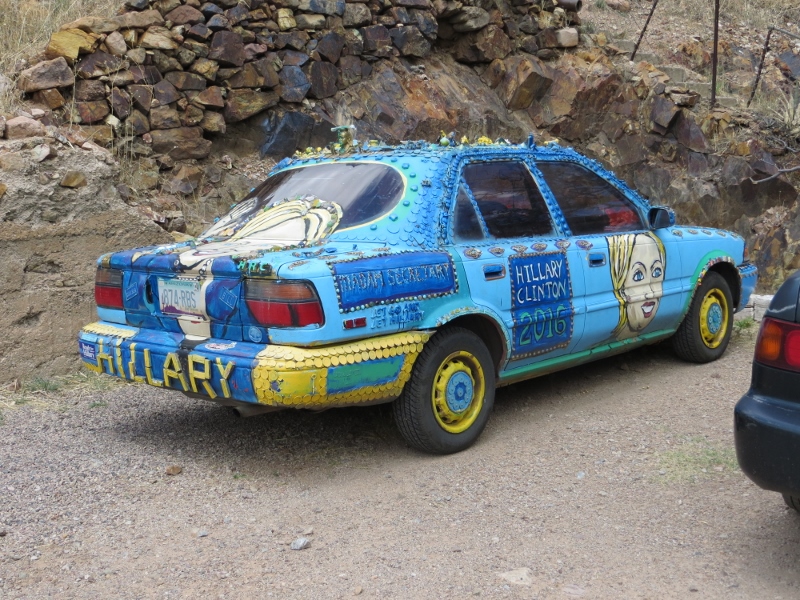 Walls and gardens weren’t the only decorated things we saw on our walk. 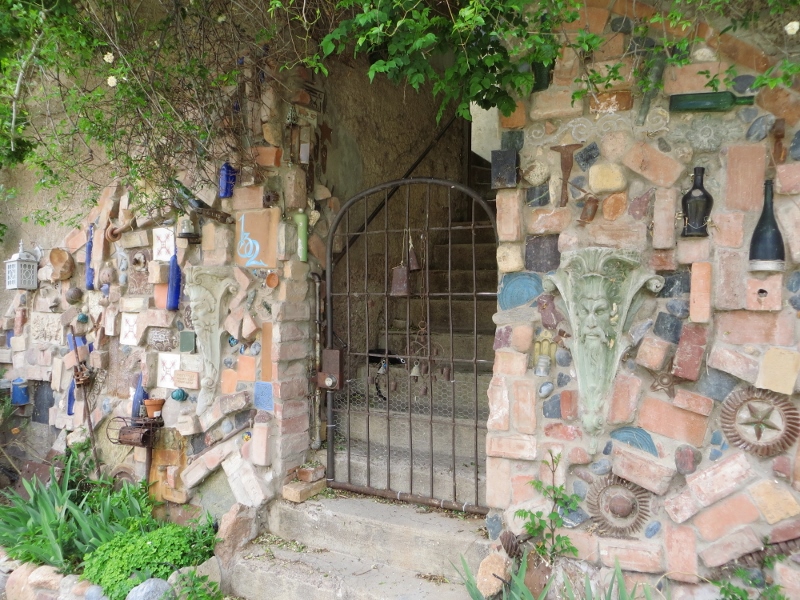 I thought this gated stairway was cool. 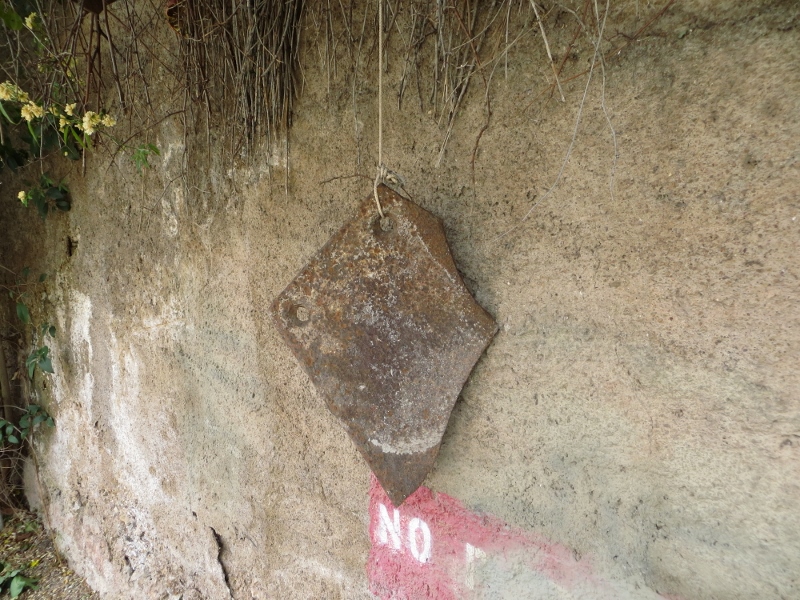 And this gong too was very cool. When I banged it against the wall it sounded just like a church bell. 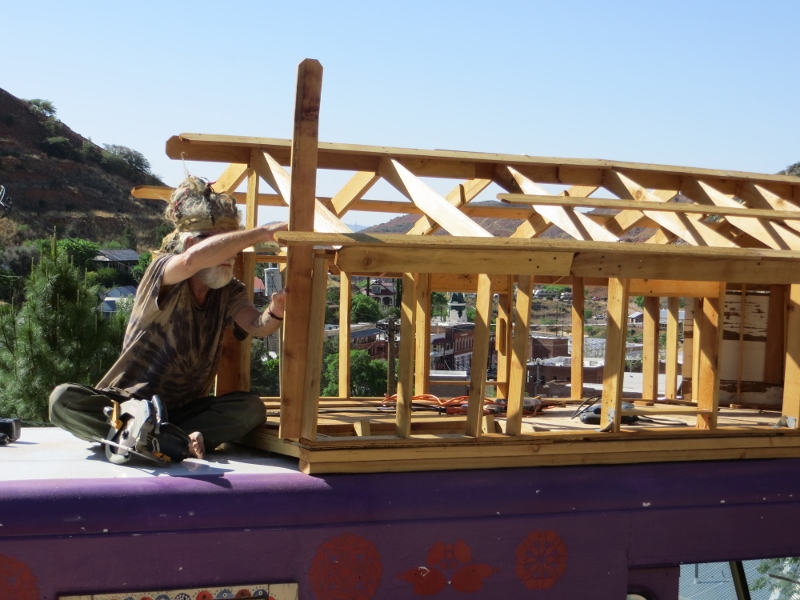 We talked to this fellow making an addition to his truck house. He was getting ready for a six-month road trip. 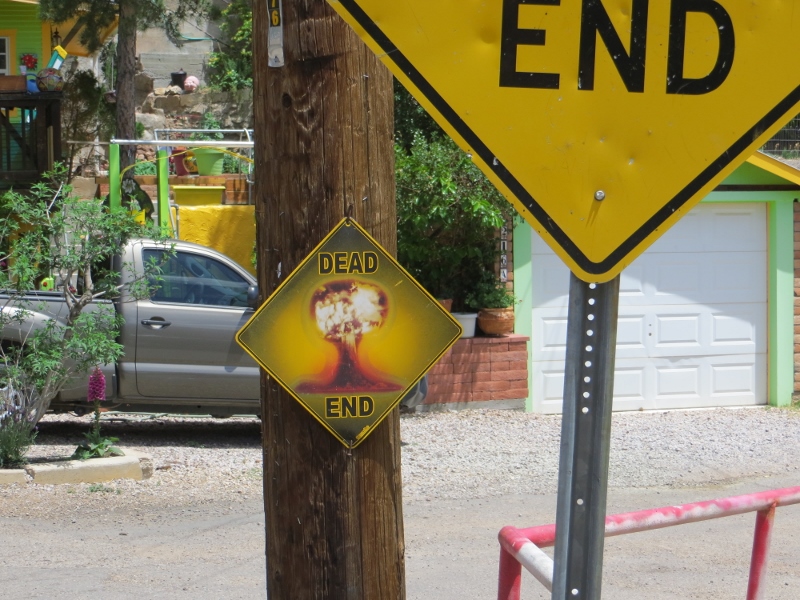 Somebody has a sense of humor. 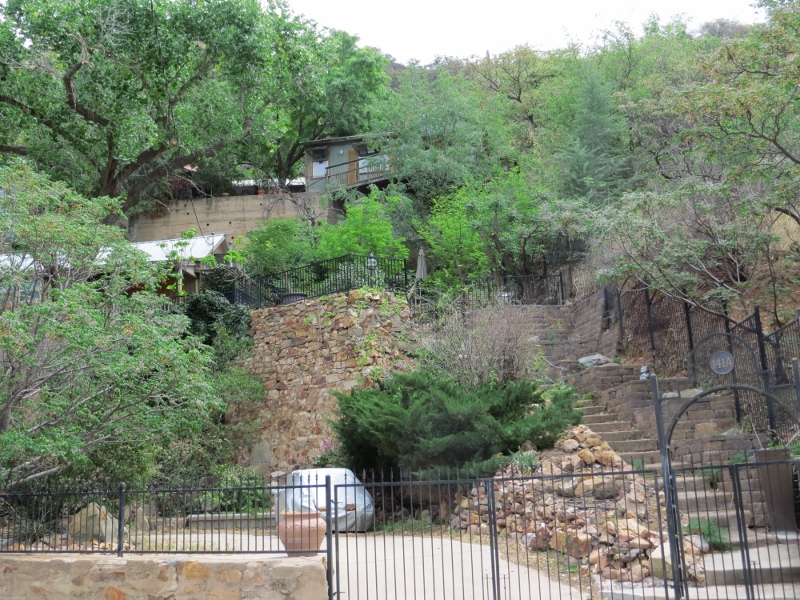 I thought the house above looked like a tree house. The only way to get there is by stair. 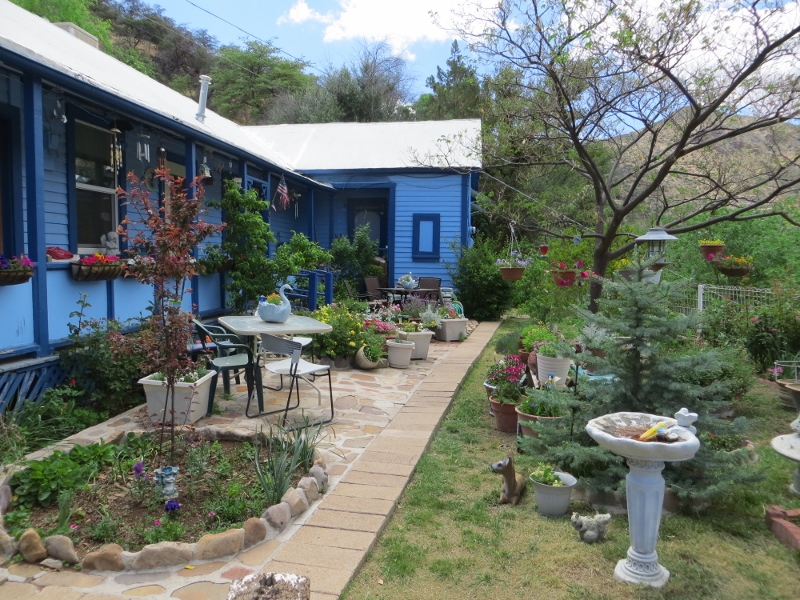 This too is a house you can only reach by stair. 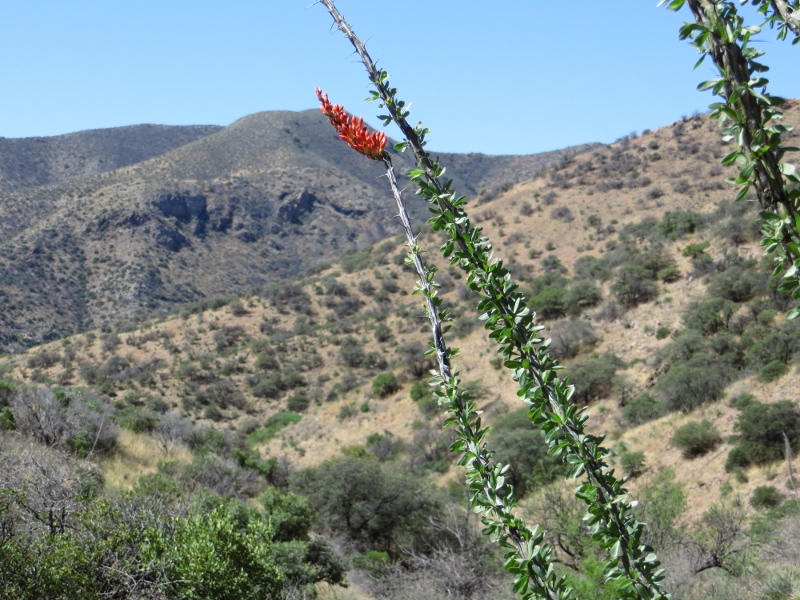 In addition to checking out stairways, we also measured the hiking trails around town. We were fortunate to see ocotillo in bloom. 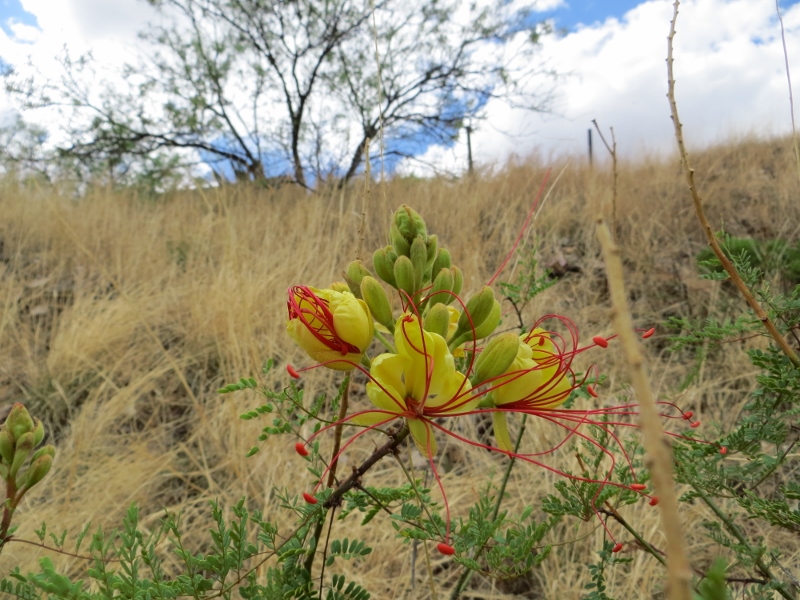 And mesquite in bloom. 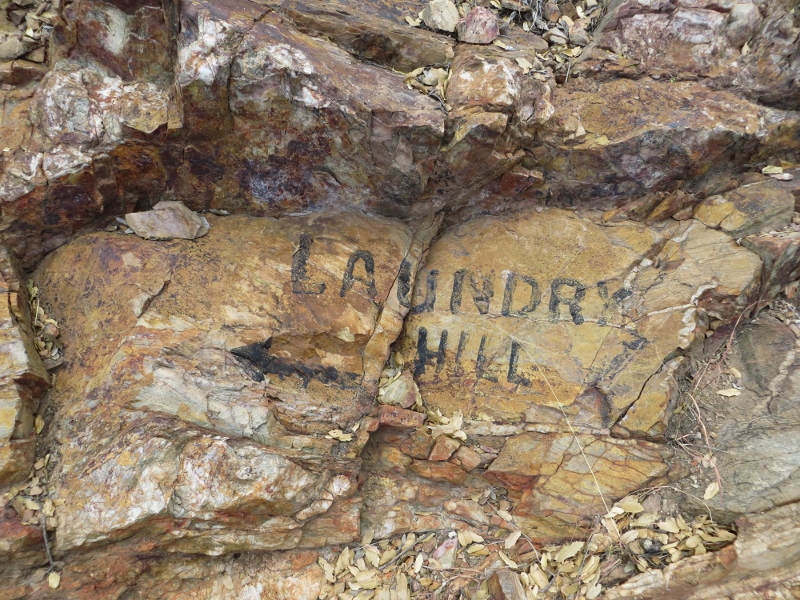 We also saw this faded sign painted in the rocks pointing the way to Laundry Hill on the other side of town. 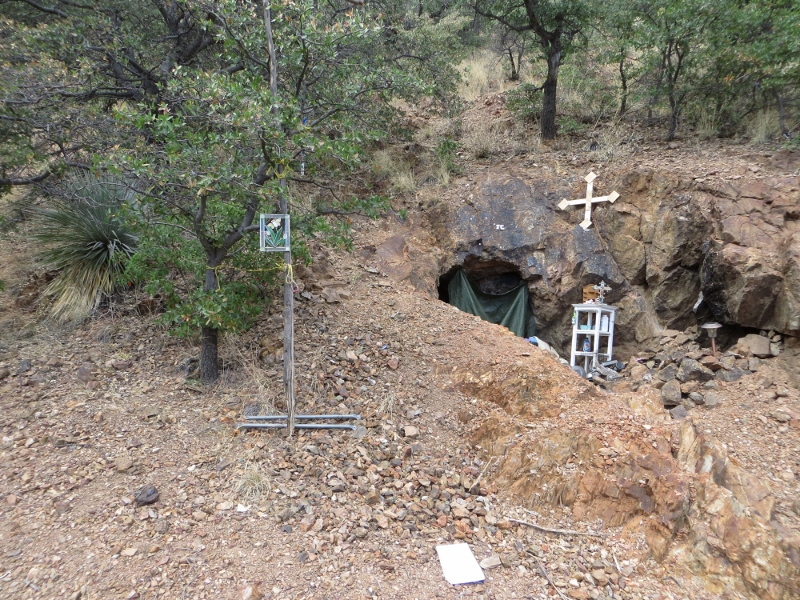 We also passed this old mine opening that looked like someone was living there. I wasn’t about to pull open the curtain to find out.

Like the other posts about Bisbee, this is only a smattering of what is waiting for you when you get the chance to wander around Bisbee.