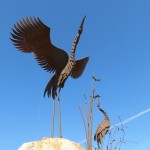 In preparation for a talk that I will be giving to the New Mexico Mountain Club on April 16 on urban walking in Albuquerque, I have been taking many city walks in Albuquerque. The timing for the talk is good because more and more people are looking for walkability in their lives. Many of them not only want to be able to run errands on foot but would also like to take an interesting walk without driving to a trailhead.

As the many posts in this blog attest, I love to walk both in cities and the backcountry. The advantage of a city walk is that it does not have the time commitment or driving expense of a backcountry adventure. It is something you can do right now for as much or as little time as you like.

Also, with the right mindset, you will find a walk in town can be just as exciting and fulfilling as a scenic wilderness walk. In a city there is always a new detail to discover or a new corner to explore. Or as Adah Bakalinsky says in her three-part wish dedication of Stairway Walks in San Francisco: The Joy of Urban Exploring:

“that all children develop an appreciation and awareness that nature and man-made beauty can exist in harmony;”

As a newer city that came into its own after the Second World War, Albuquerque was built to accommodate cars. A typical thru street in Albuquerque has six lanes of traffic, a 40 mph speed limit, and a sidewalk right on the curb. It would be hard to find a less inviting place to walk. 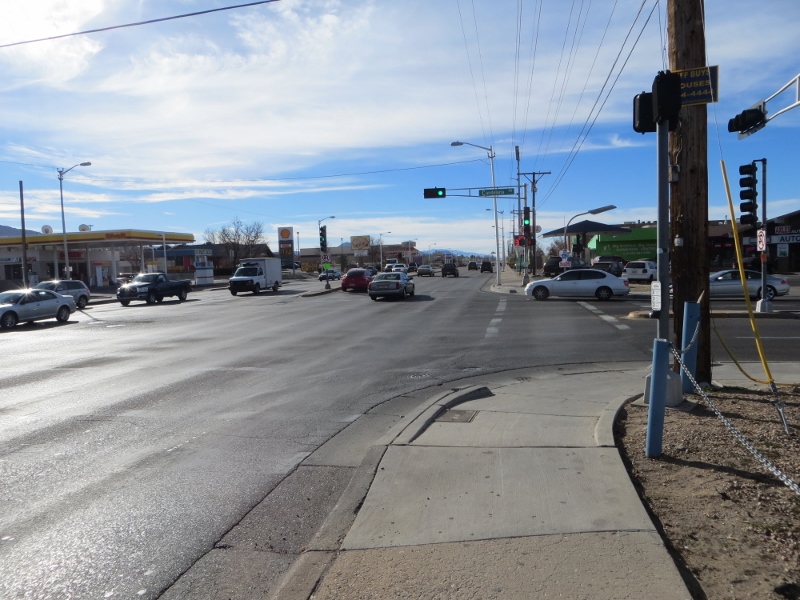 Not a great place for a quiet stroll!

Most of Albuquerque was built with the assumption that all residents would have cars and would drive to their errands. As a result many neighborhoods have very low walkability scores. Despite the low scores Albuquerque does have many great places to walk; the most obvious being along the Rio Grande or in the Sandia Mountains.

The Rio Grande flows right through Albuquerque and is surrounded on both sides by a cottonwood forest called the bosque in New Mexico. There you can find running paths, bike trails, walking paths, and abundant wildlife. 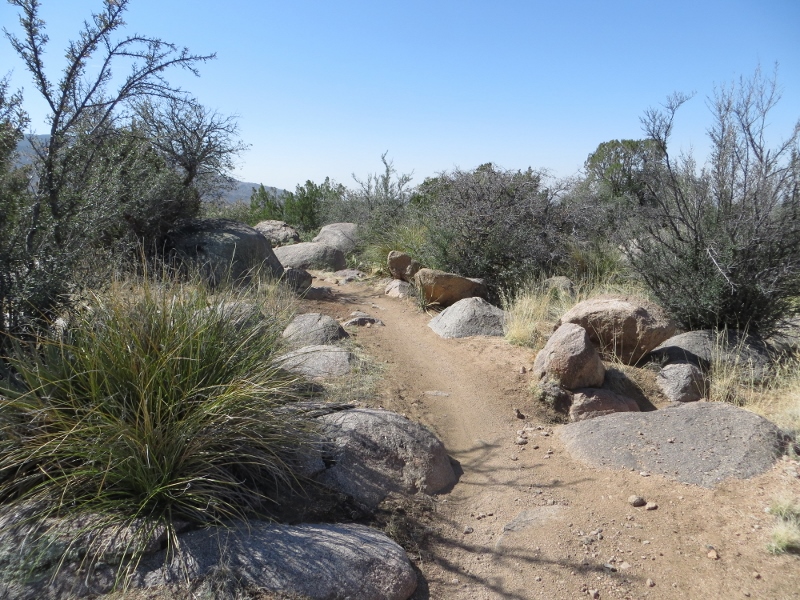 This is a typical Open Space trail in the Sandia Mountain foothills.

Despite low walkability scores, you can also find many places to take a great walk in the residential areas of Albuquerque. In the Rio Grande valley there is a network of small irrigation ditches called acequias. There are also many older neighborhoods with interesting homes and streets that twist and turn. There are even some pleasant streets that are not six lanes wide and have nice pleasant sidewalks. All of these are great places to walk. 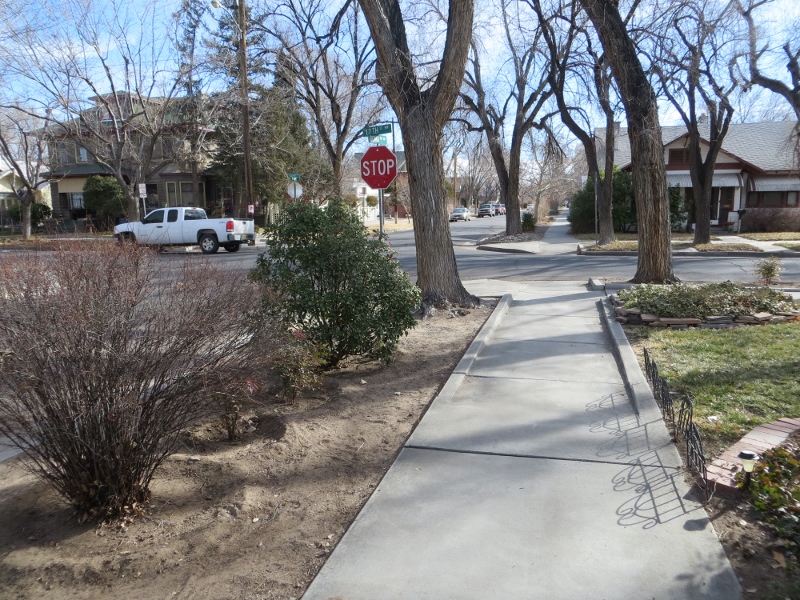 This is a very nice street for walking. The sidewalks are separated from the street, there is nice shade, and the houses are interesting.

Even the newer and more car oriented areas have places to walk. There are paved bike paths along concrete lined arroyos. And with some creativity on your part you can find short cuts, routes, and walking paths in many of the residential areas. 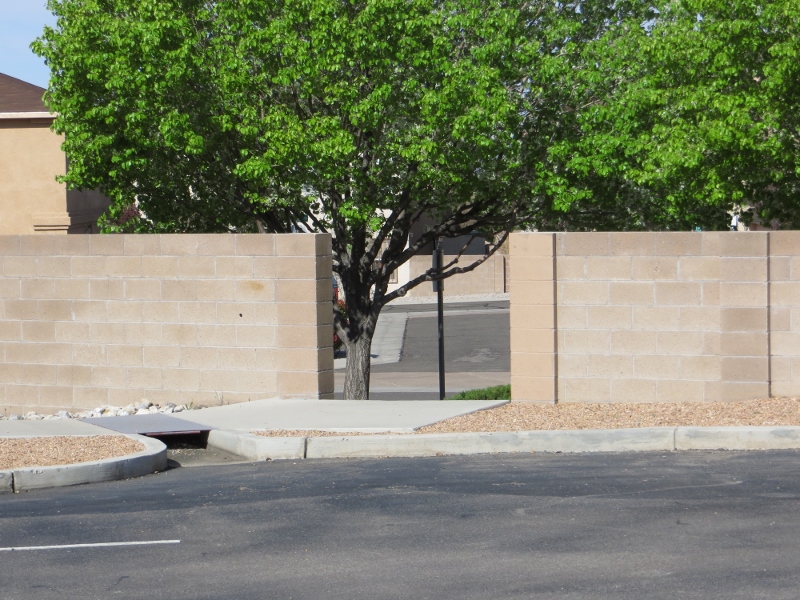 When you see an opening like this, check it out. 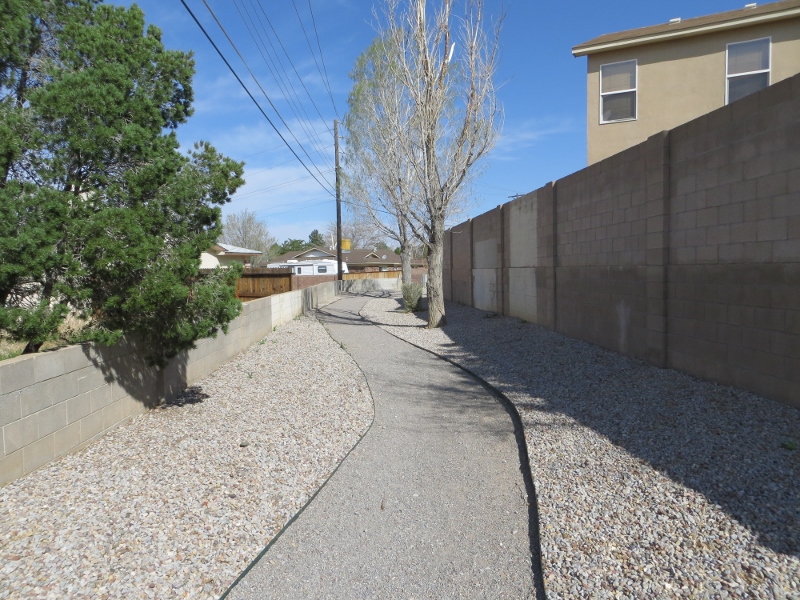 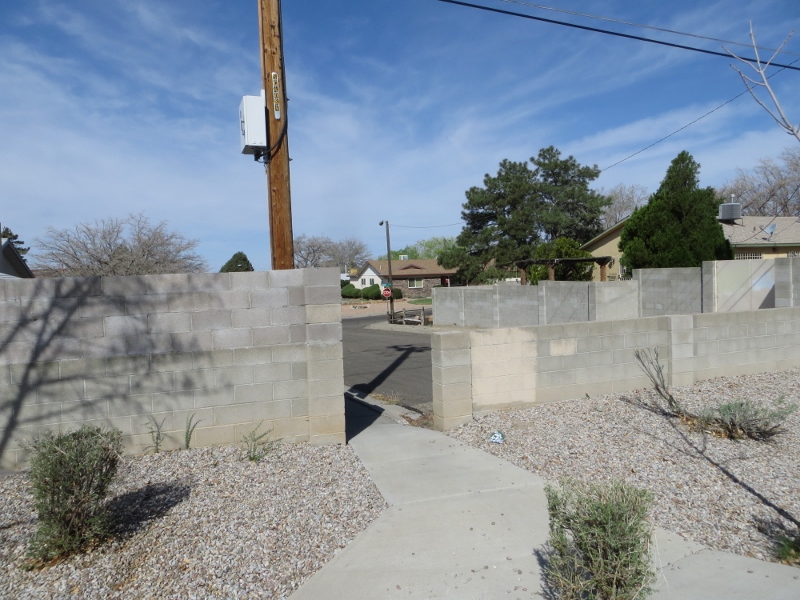 that will lead to another short cut to start a whole new sequence of walking.

I personally like to develop my own walks by taking advantage of whatever comes my way. I may start a walk by following a path along the Rio Grande in the bosque, and then walk along a bike path until I come upon an acequia, and then follow the ditch or several ditches until I find an interesting street or set of streets to take me back to my starting point. Instead of following a single path, it is like following a series of links to create your own route.

No matter how many times I start from the same point, every walk ends up different. The route is never the same and I always seem to run into something new or unexpected. The essence of wandering is letting yourself see all that is around you and then letting what you see guide you on where to go next.

Below are some examples of developing your own walks: 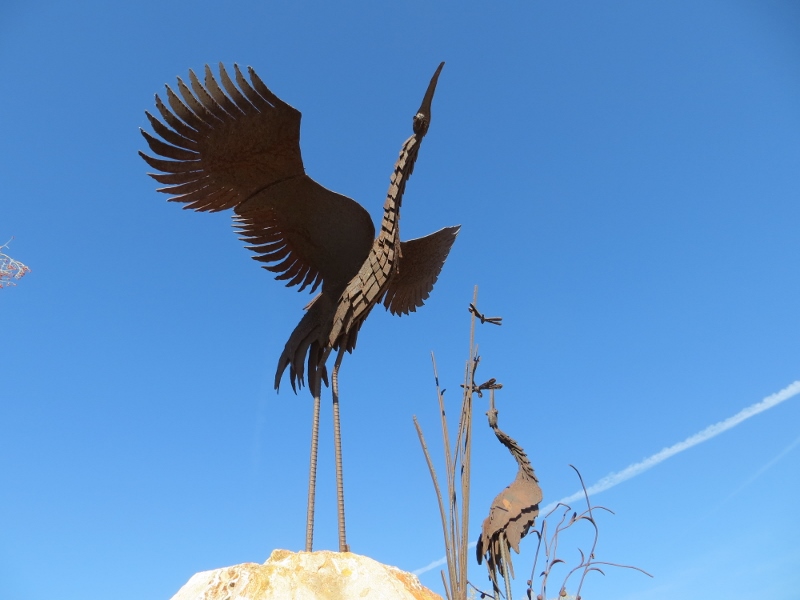 If you want walk in the bosque, you could start your walk at Central Avenue and the Rio Grande. 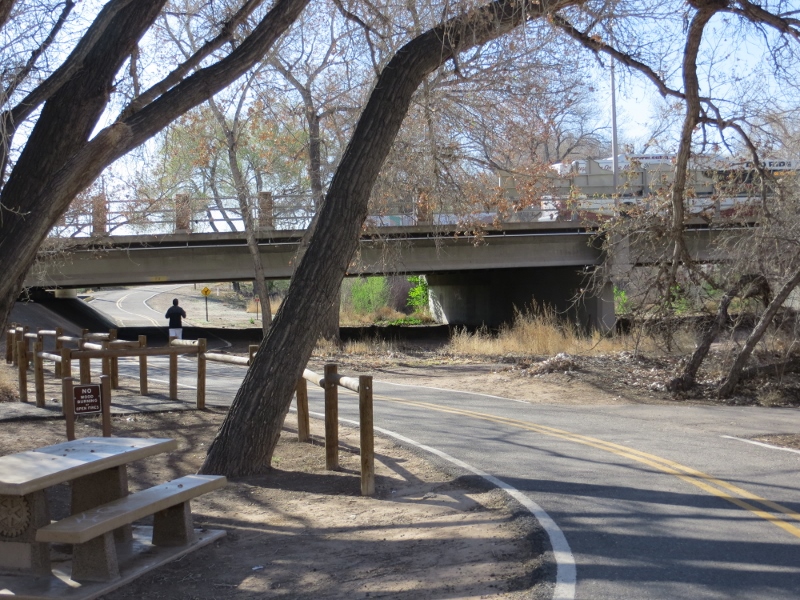 There you will have your choice of direction and type of path you want to follow. 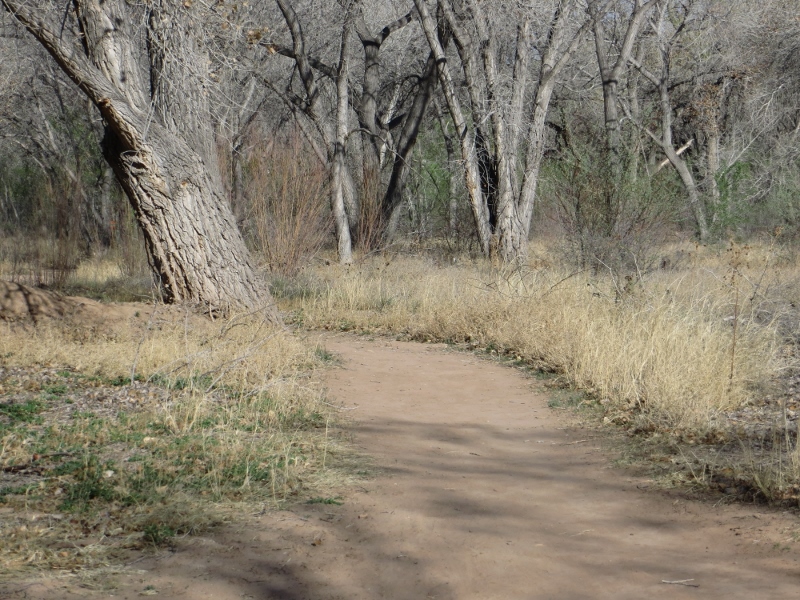 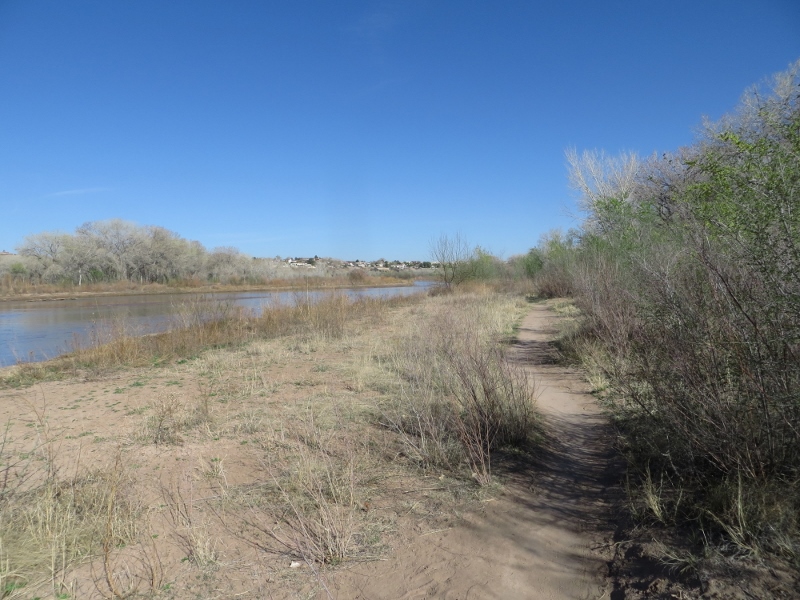 And walking along the river. 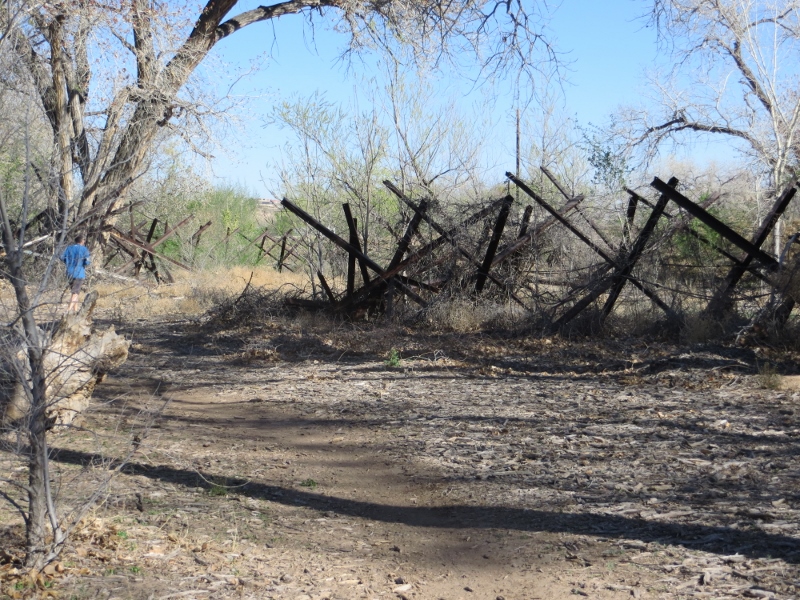 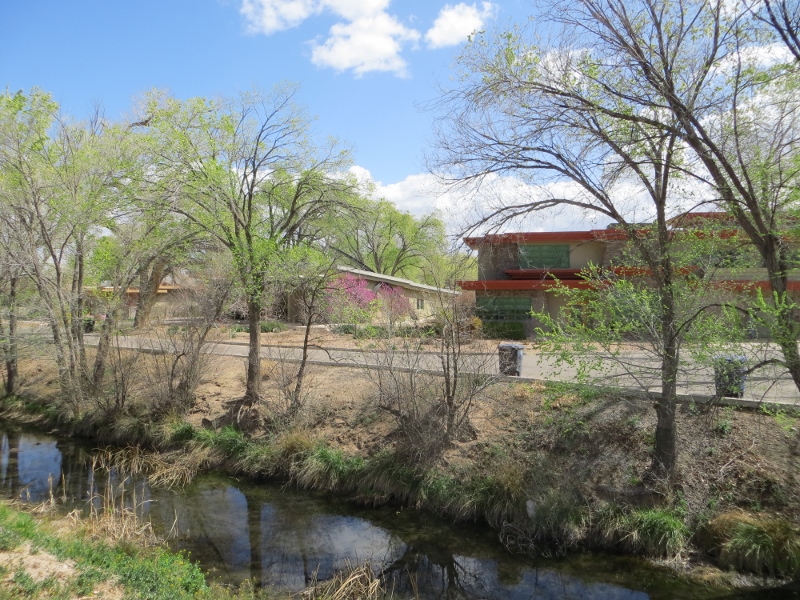 I also like following the bike path as it approaches residential areas. 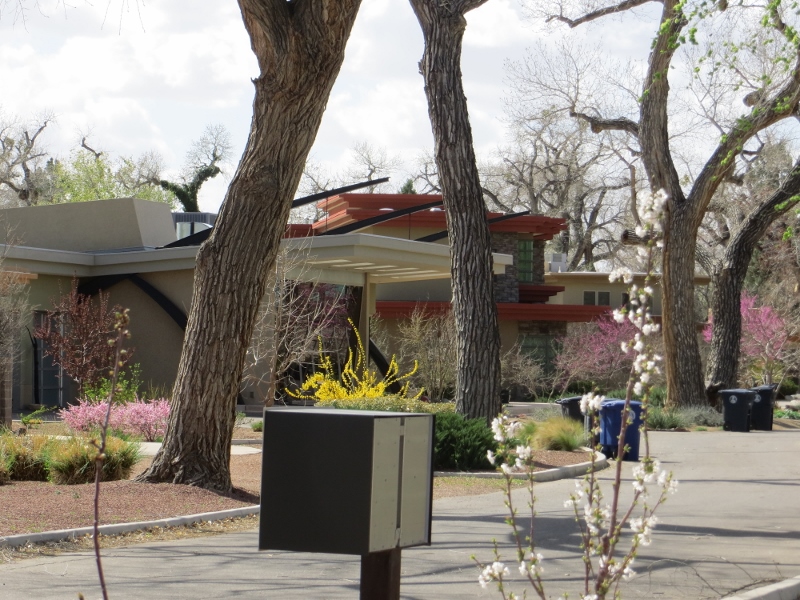 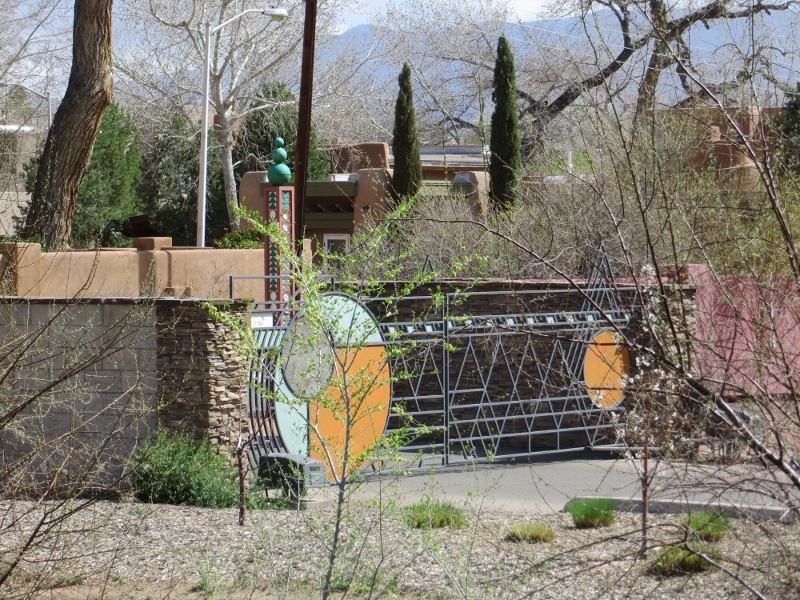 And flourishes of Frank Lloyd Wright! 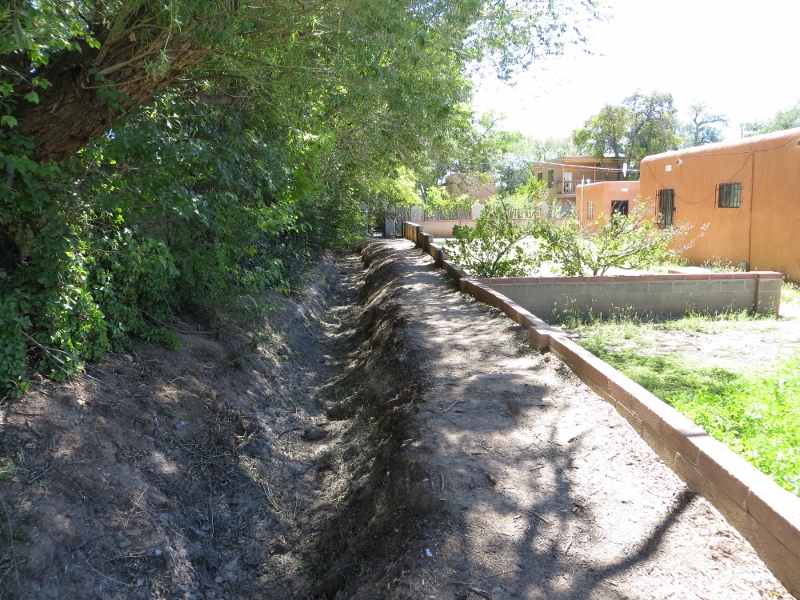 Eventually I like to get off the main path and follow one of the hundreds of acequia ditches. 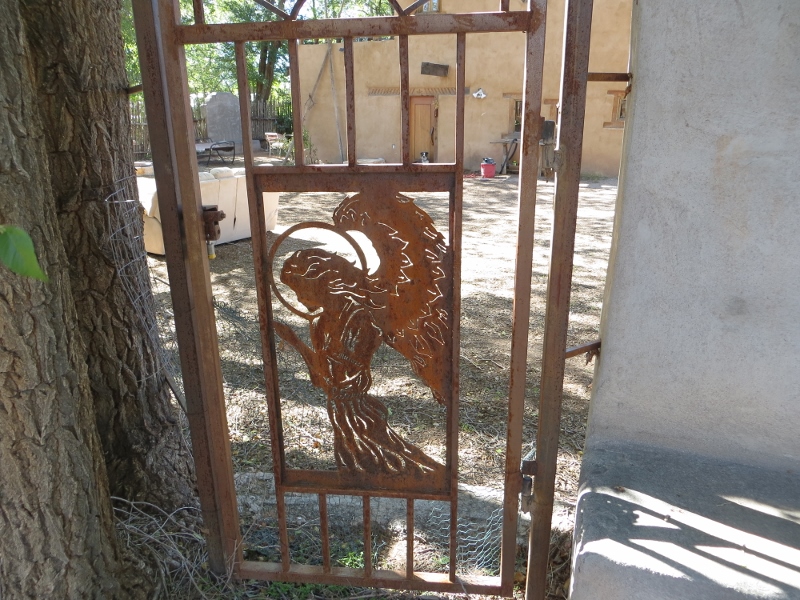 You never know what little details you’ll find along the way. 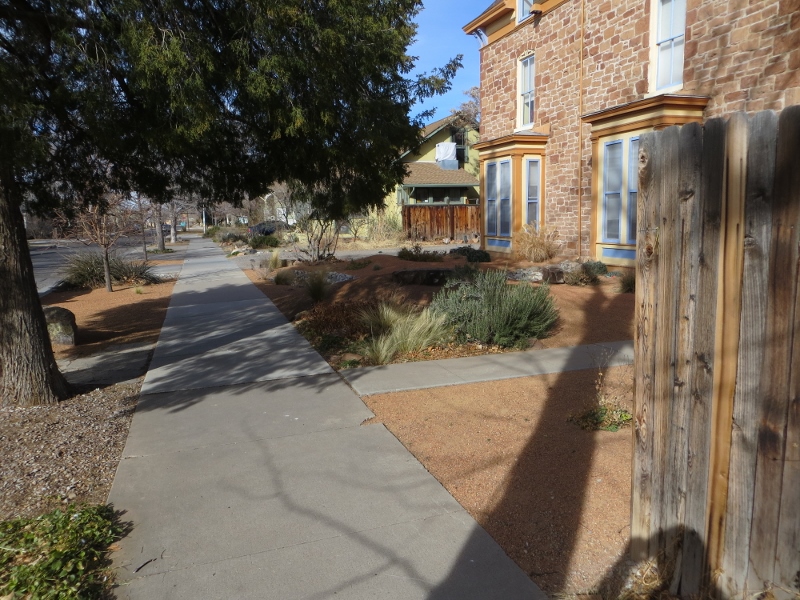 Or what interesting street you’ll walk along on your way back to your starting point. 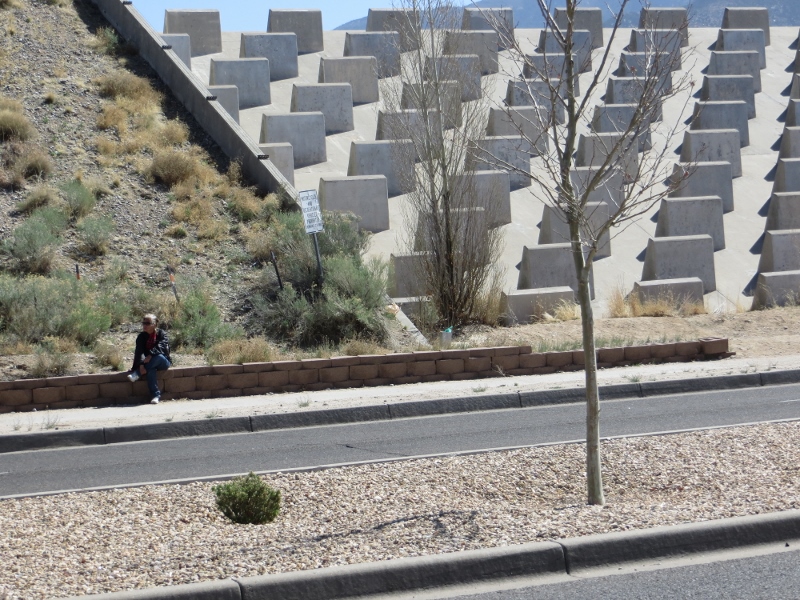 For an entirely different experience, you can walk in one of the newer areas of Albuquerque. You could start your walk at this flood control dam. If you are a Breaking Bad fan you’ll recognize this spot as where Walt went to disappear. 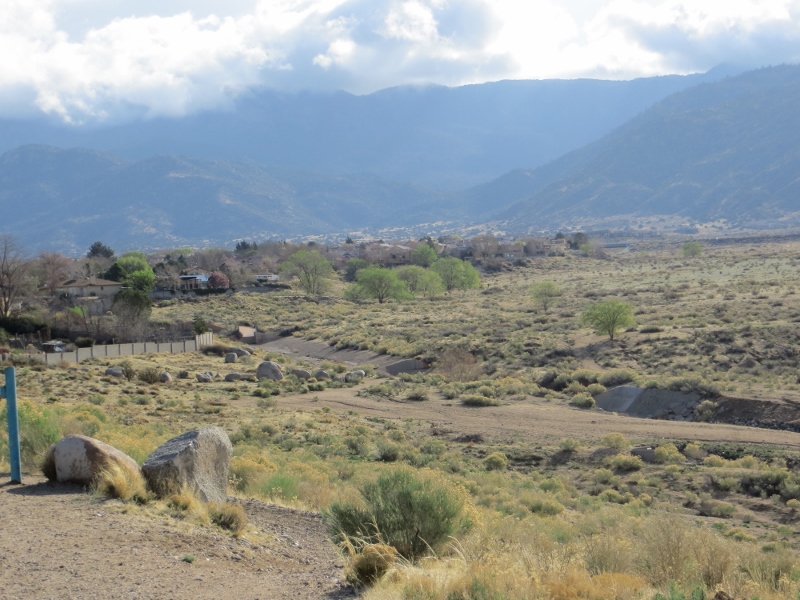 When you get to the top of the dam you’ll find several trails you can follow. If you want, you can follow trails that will take you up and over the mountains. 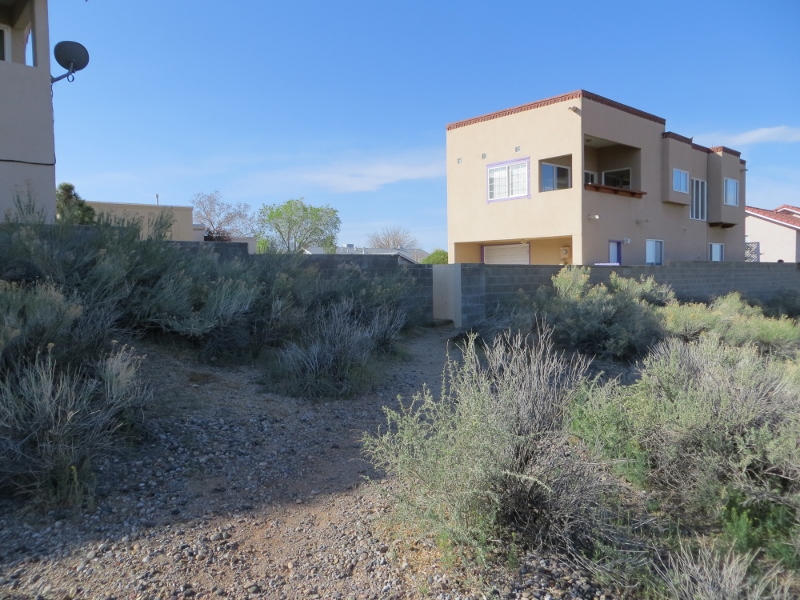 or you can follow a trail that will take you to this short cut leading to a street. 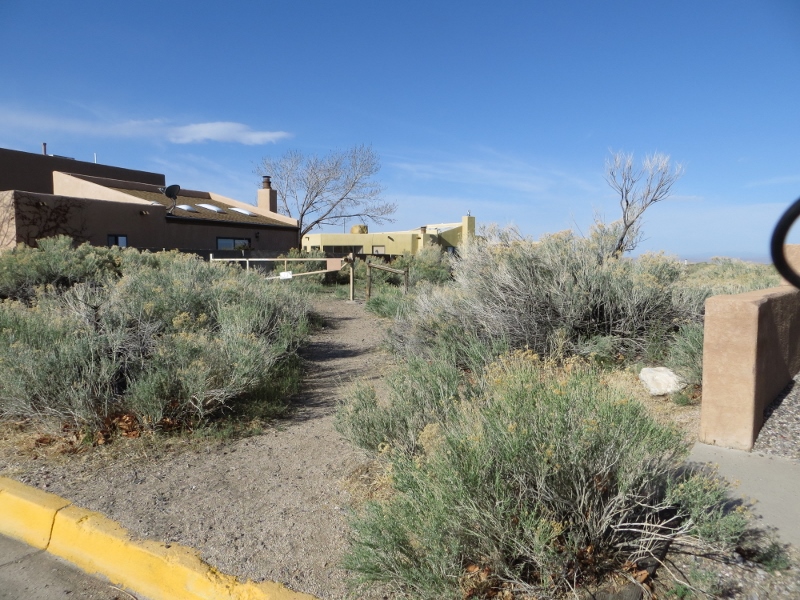 You can then follow the street that will take you to this short cut leading back to dam. 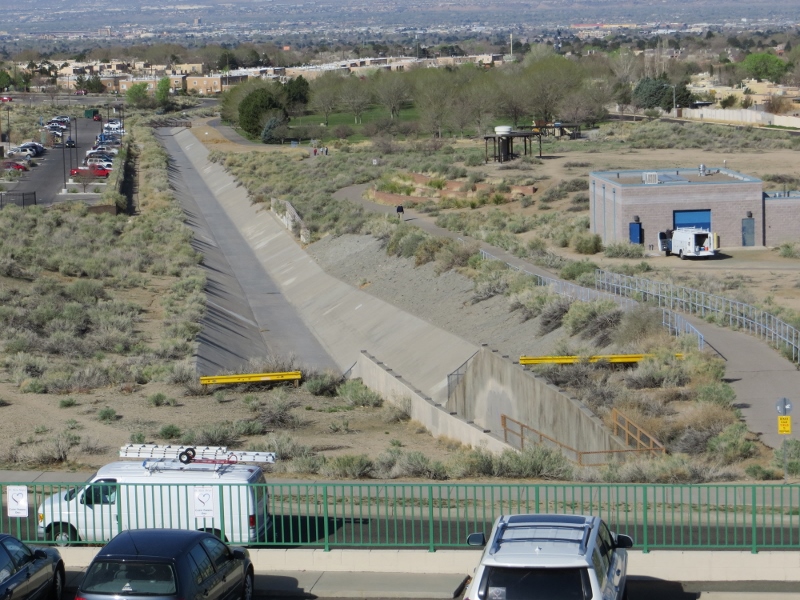 From the dam you can follow a bike and walking route that can take you all the way to the Rio Grande. 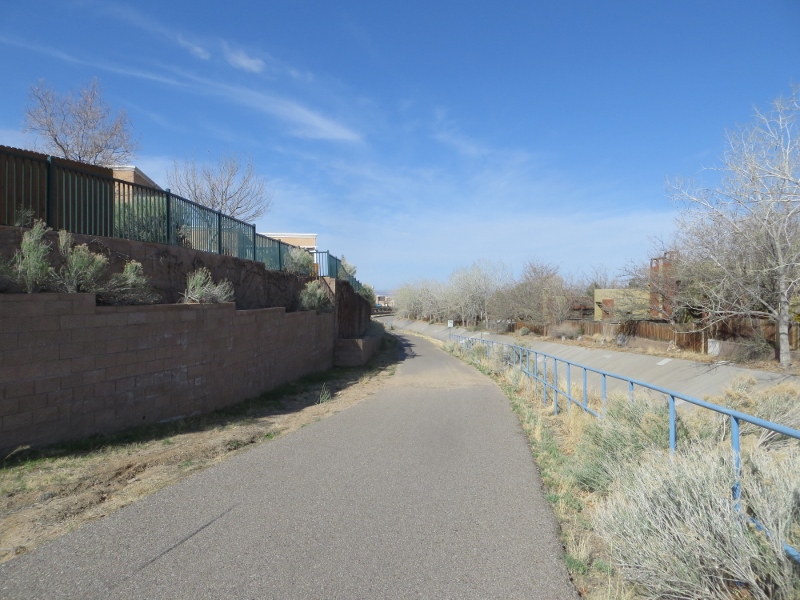 You can follow the bike route if you want, 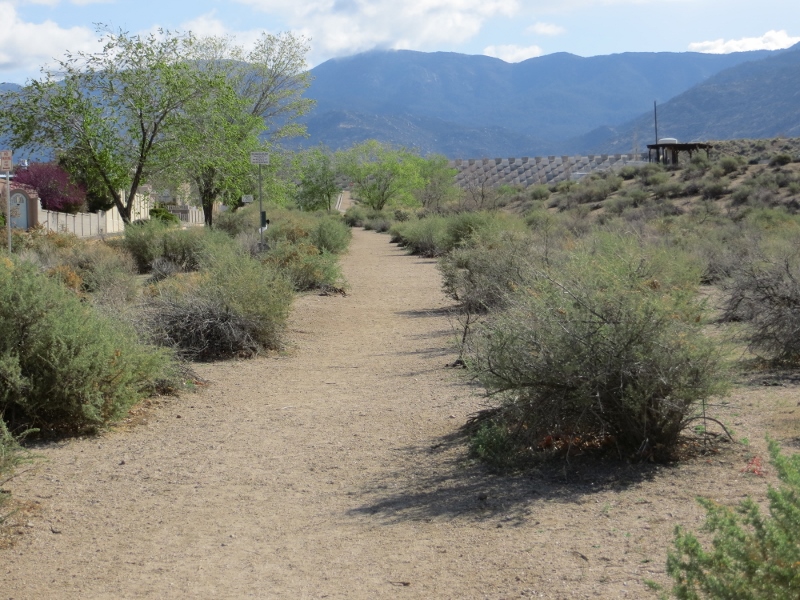 or take a nice path back to the dam.

As you can see there are many ways to make a walking and wandering adventure in Albuquerque. It’s up to you to find them and walk them.