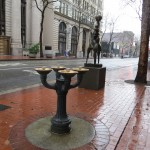 Many of the recent posts in this blog have pointed out characteristics, for example the “cream colored” brick buildings of Milwaukee, Wisconsin, that help give that location a “sense of place.” For Portland, Oregon, that characteristic could be its “foot friendliness.” The city is compact; it has a great light rail, streetcar, and bus network; many of its neighborhoods have very high “walk scores”; and it is always easy to find a great place to walk. You can find several previous posts about walking in Portland by entering “Portland” in the search box.

Earlier this month, I had another opportunity to experience the “foot friendliness” of Portland. In the course of several walks with my grandson, daughter, and son in law, we found many items to add to why Portland is a great place to be on foot.

For starters, there is the newly opened (September 2015) Tilikum Crossing Bridge. It is the largest car-free bridge in the United States. It was built to accommodate a new streetcar and light rail route and has lanes for both pedestrians and bicycles. It is extremely attractive and is a great way to cross the Willamette River, even in the middle of an ice storm, without the noise of cars zooming by you. 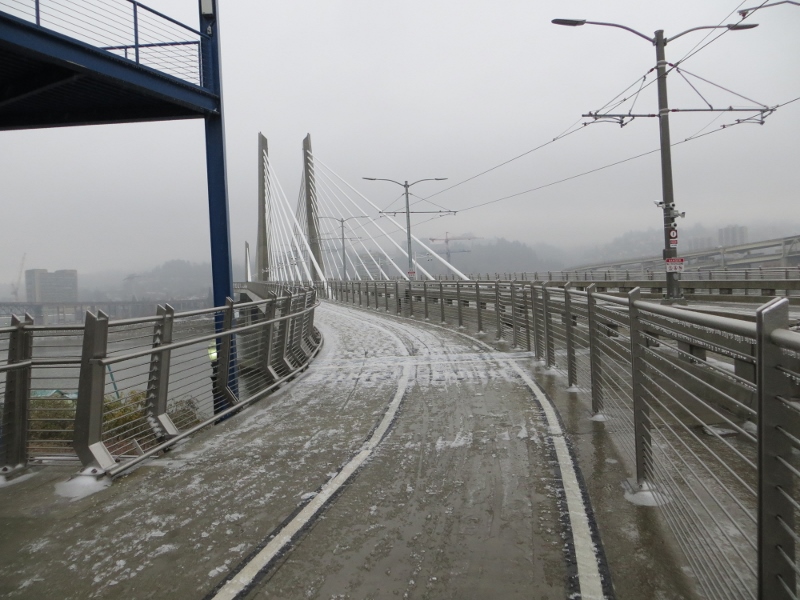 As you can see, it was a very snowy and icy day when my grandson and I walked across the bridge.

Drinking fountains are almost ubiquitous to Portland. They are in every neighborhood and are great for keeping a walk going. Downtown Portland has unique four-bowl water fountains called “Benson Bubblers.” They are all over downtown and were an early 20th Century gift to the city from Simon Benson, a local businessman. The fountains were even mentioned by John Gunther on page 91 of his 1947 book “Inside U.S.A.” Milwaukee, Wisconsin is another location that calls water fountains “bubblers.” 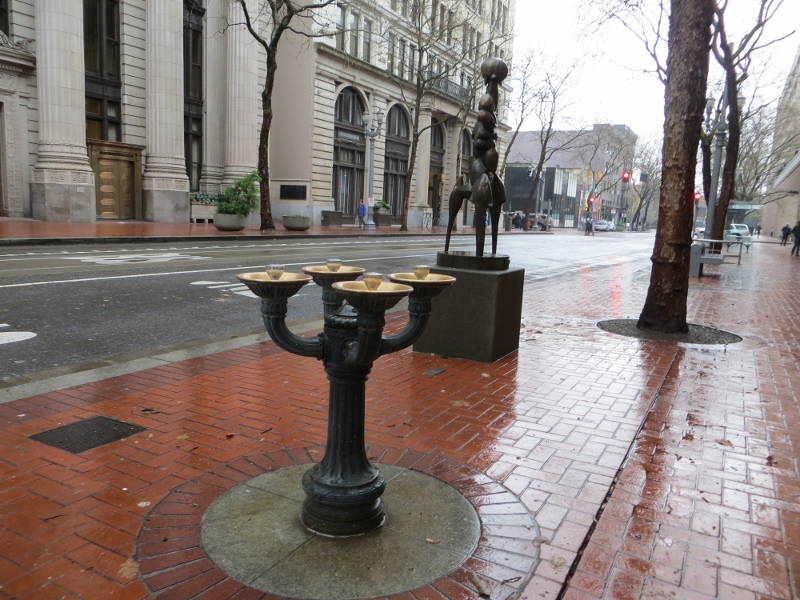 The bubblers operate year round in Portland. Unfortunately, they were turned off because of ice and snow when I took this picture.

On a walk from downtown to the Aerial Tram, my daughter, son in law, and I ran into several foot friendly items. 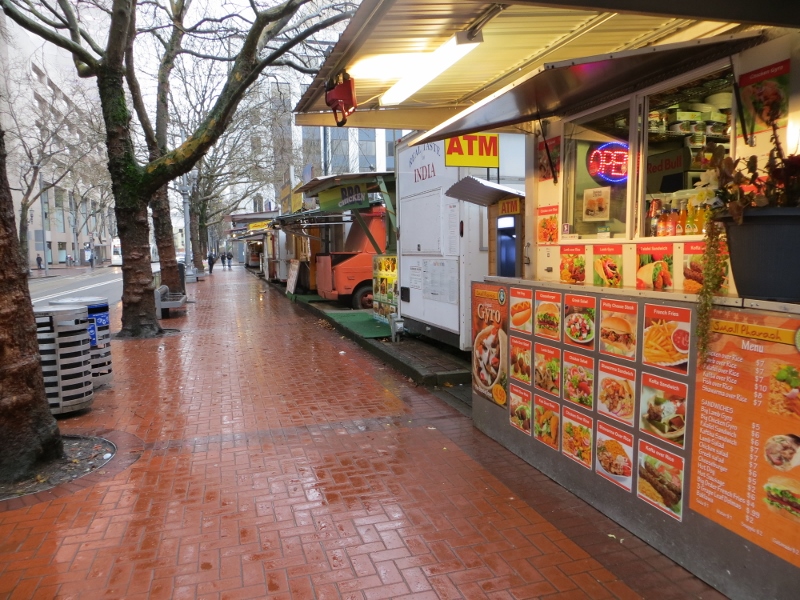 Food carts are another “foot friendly” aspect of Portland. If they were not invented in Portland, they should have been as they can be found almost everywhere. They are certainly iconic of Portland. 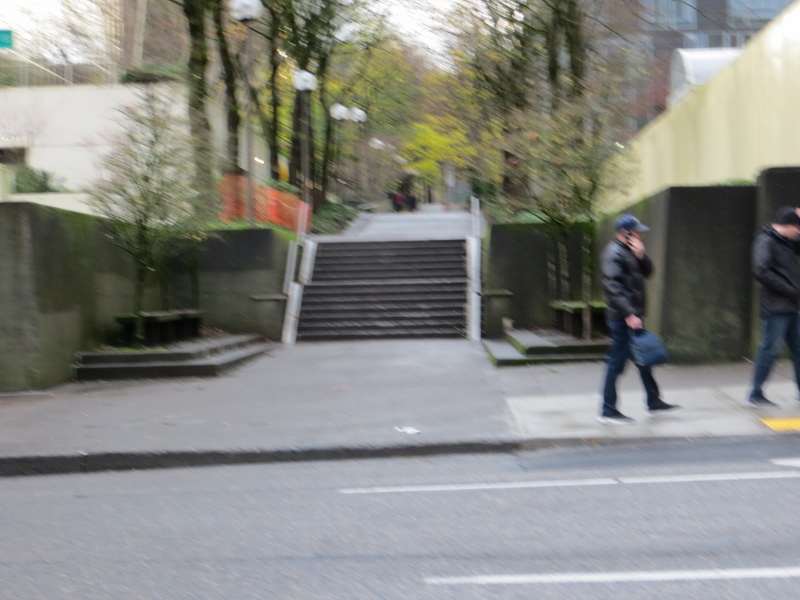 Many of the residential areas in downtown Portland have pedestrian only walkways. (I apologize for the poor quality of this picture.) 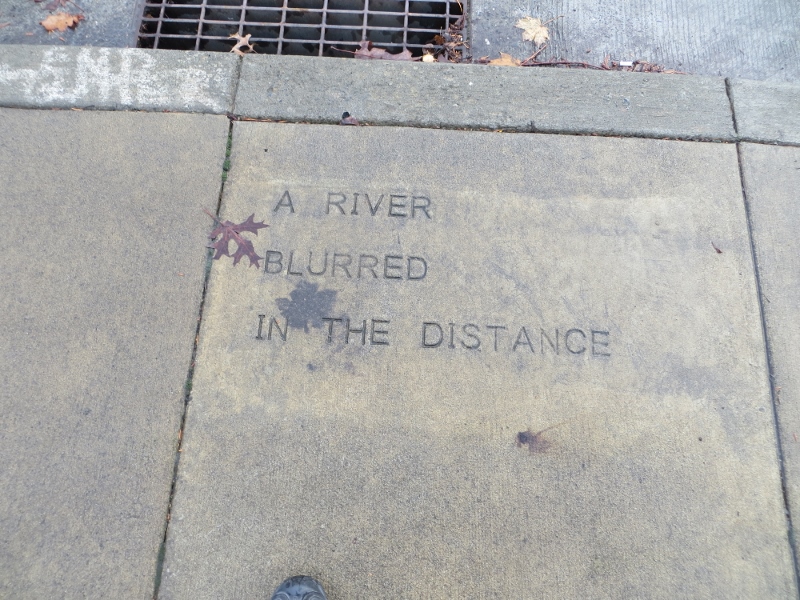 On one stretch of sidewalk we found these poems etched into the sidewalk. I’m not sure if the poems are meant to be stand-alone verses or meant to be pieced together into a longer poem. I even found these at some of the light rail stations. 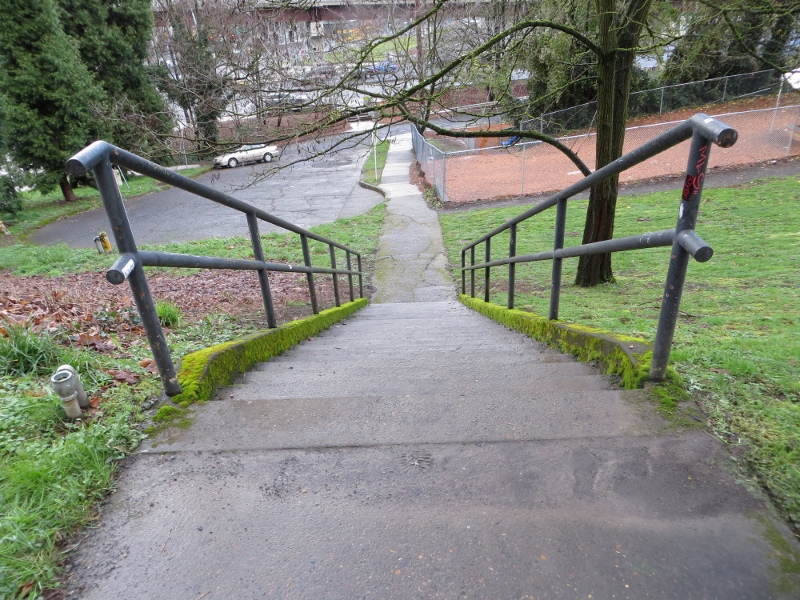 We eventually found this small stairway to bring us closer to the riverfront. 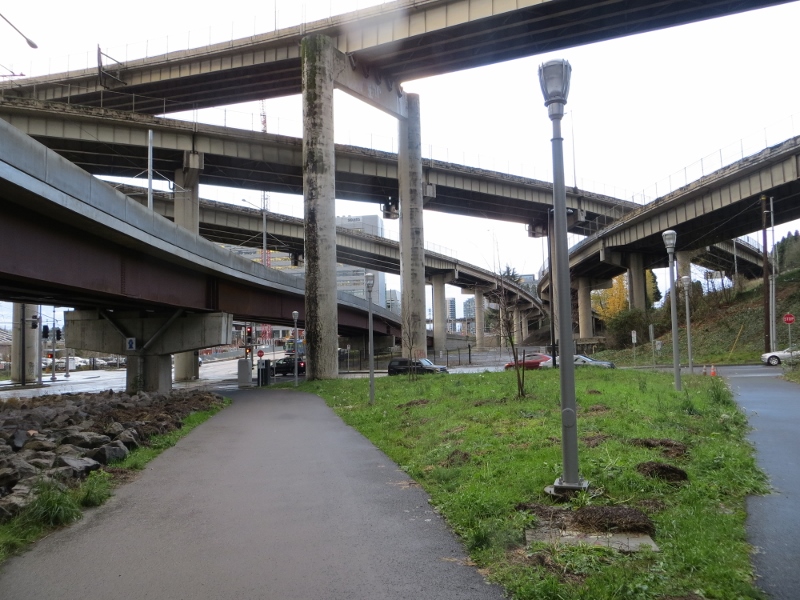 The sidewalk at the end of the stairway led us to this paved bike and pedestrian path. According to the city’s website, Portland has 319 miles of bike paths and routes. 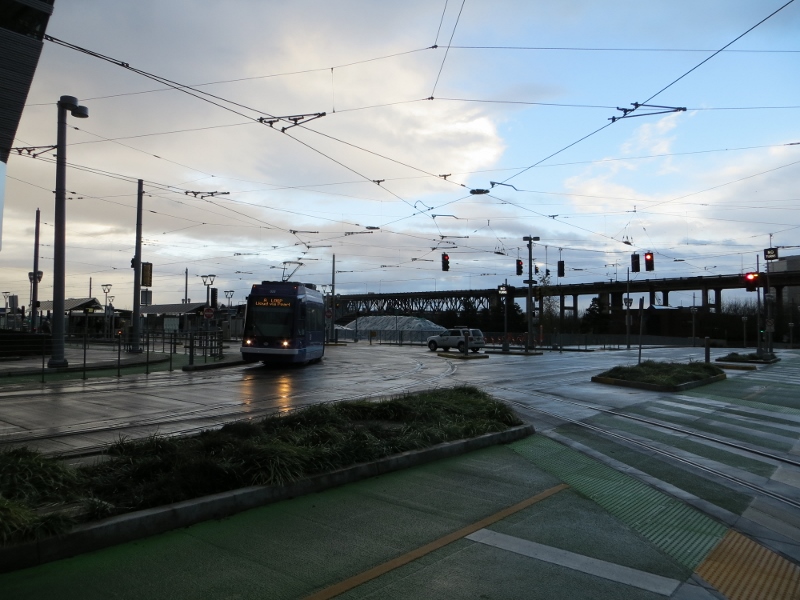 We passed one of Portland’s streetcars along the way. 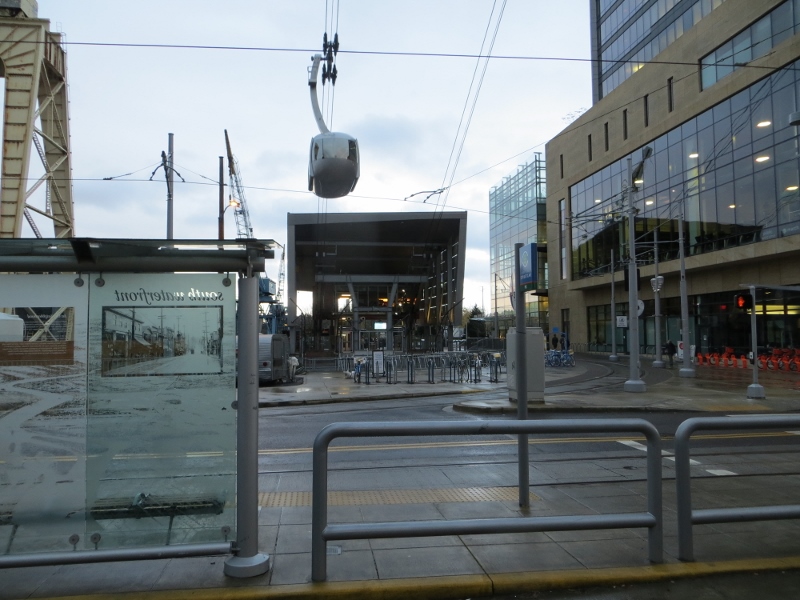 Before we knew it, we were at Portland’s Aerial Tram. 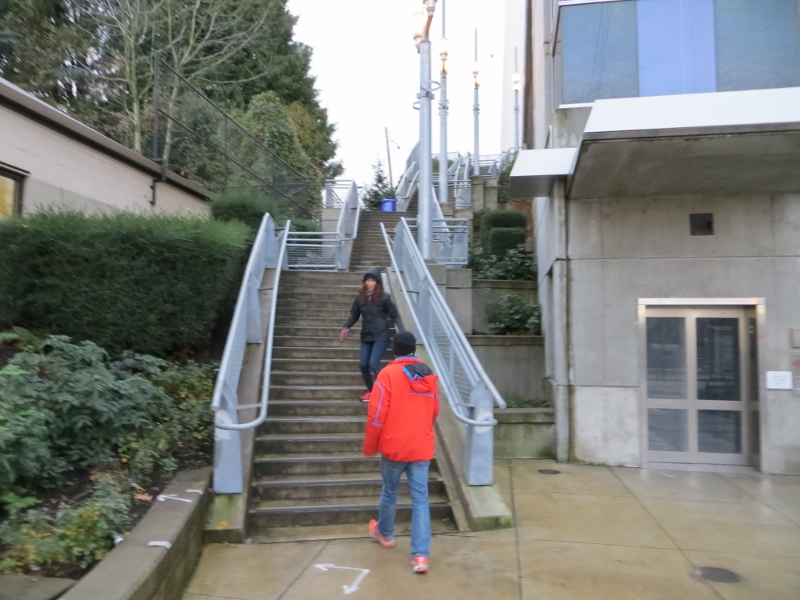 These are the stairs leading up to the Gibbs Street Bridge. 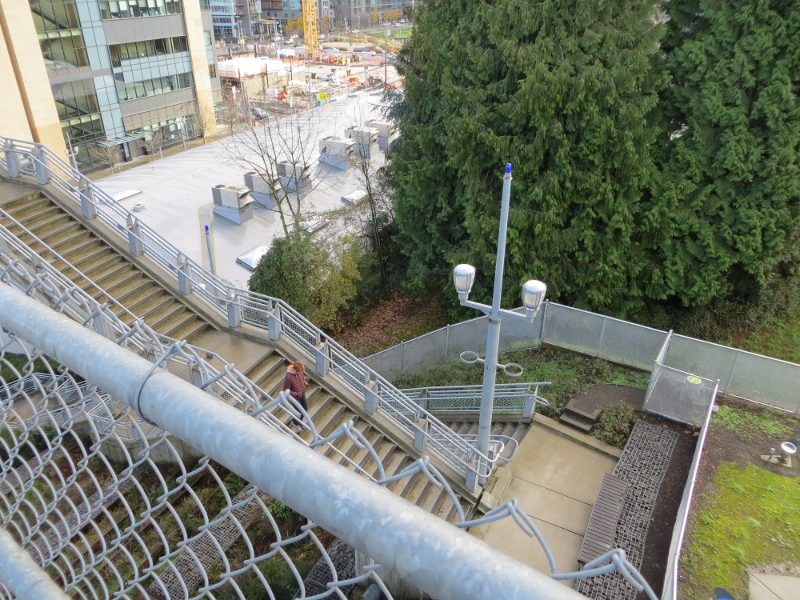 Here’s another look at the stairs from the top.

Rather than taking the tram up to the hospital and medical school complex (OHSU) at the top of the hill, we decided to see if we could walk to top. We began by walking over the bridge and went through a very pleasant neighborhood to a 50-step stairway. From there we zigged when we should have zagged and ended up bushwhacking through a ravine to reach the top. Once at the top of the hill, we took many flights of stairs inside the tower supporting the tram to actually reach the tram deck. My son in law thought it was one of the best walks he had ever taken.

On the next day my grandson and I took the same walk over the Gibbs Street Bridge. This time we zagged and found a very nice route to the top that included two stairways and a brick path. We also found an easier way to get to the tram. 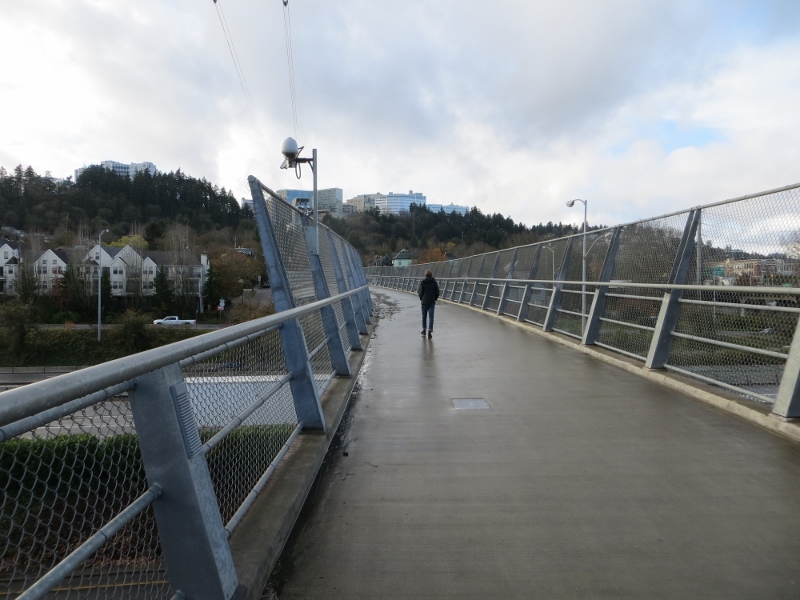 The bridge going over the Interstate. The cluster of buildings at the top of the hill is OHSU. 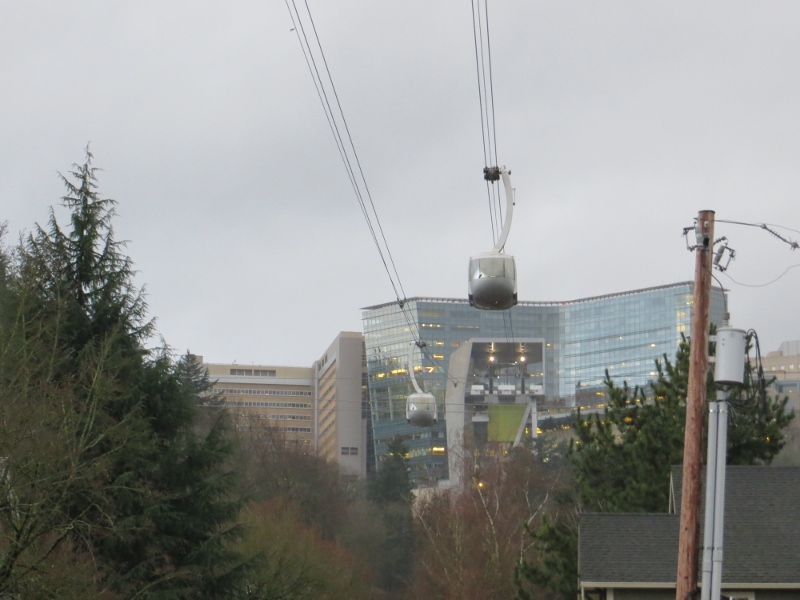 While walking across the bridge, you have the added attraction of the tram gondolas flying overhead. My daughter, son in law, and I climbed nine stories inside the concrete structure supporting the tram to reach the launch deck. 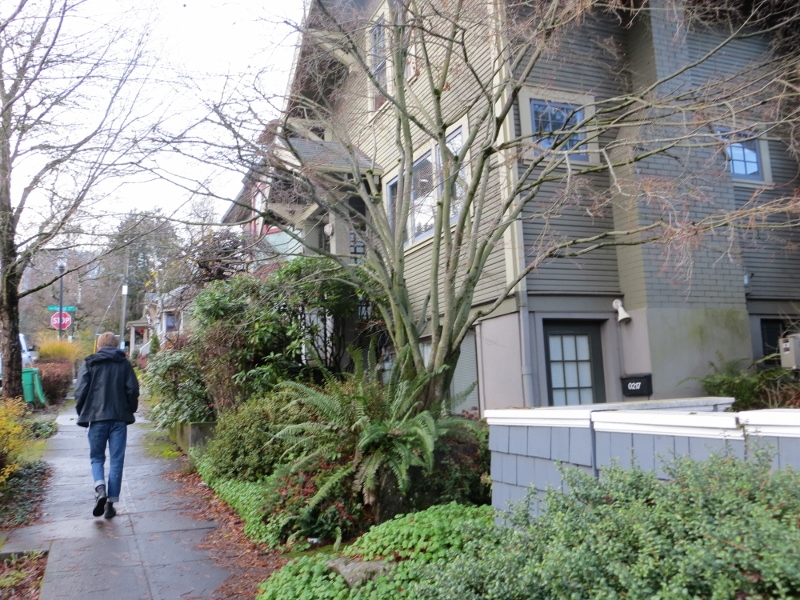 After crossing the Interstate, we continued on Gibbs Street through this very pleasant neighborhood. 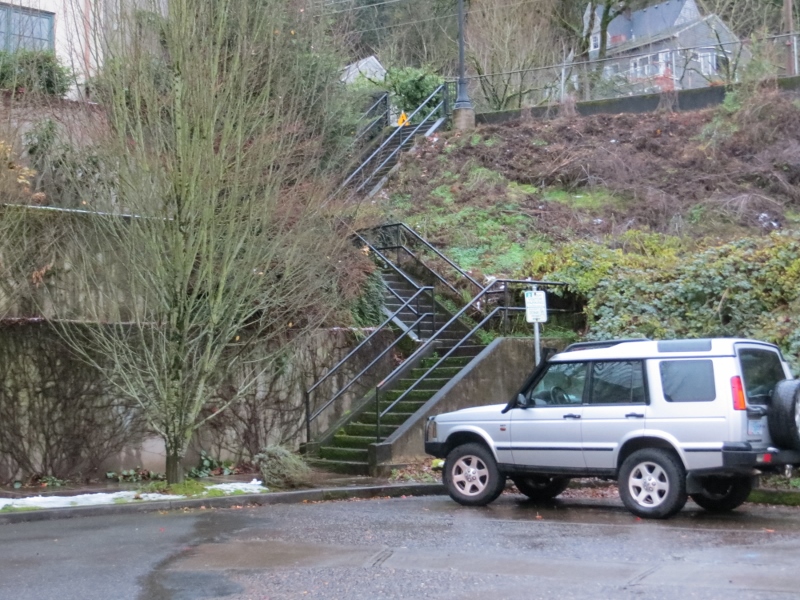 At the end of Gibbs Street, we found this 50-step stairway to take us up to Barbur Blvd. 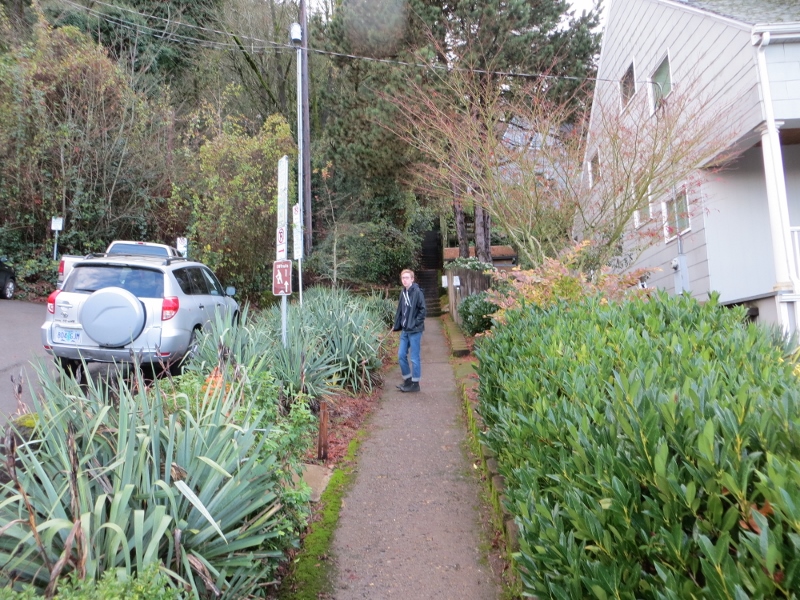 When my grandson and I zagged rather than zigged at Barbur Blvd., we found a 26-step stairway that took us up to this sidewalk. The stairway at the end of the sidewalk has 50 steps and leads to a brick path. 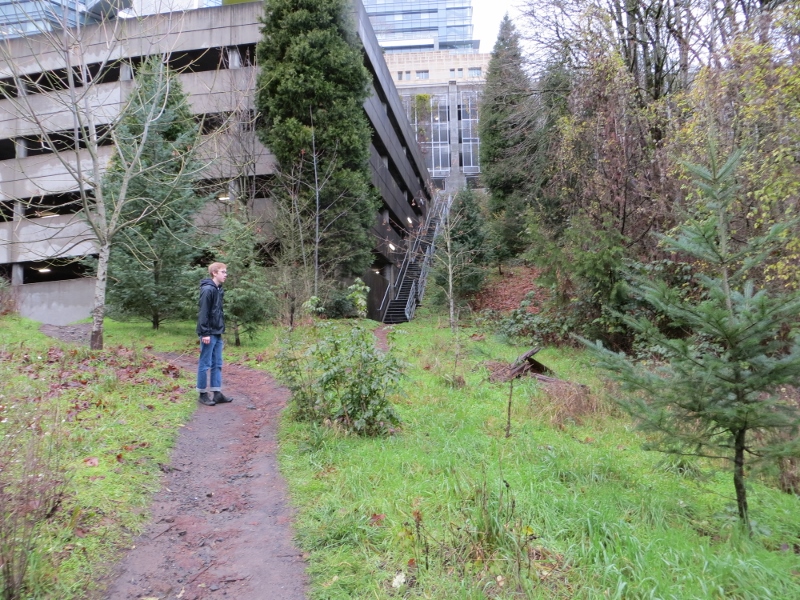 At the end of the brick path we found a series of walkways that brought us to the base of the OHSU complex. from this point there are many routes to reach the top or to continue the walk.

We took a different route to go down from OHSU to work our way to downtown. While crossing an expressway along the way, I noticed how the city had improved a sidewalk barrier to make crossing the expressway a safe and pleasant experience. It’s little touches like these that makes Portland “foot friendly” and a great place to take a walk. 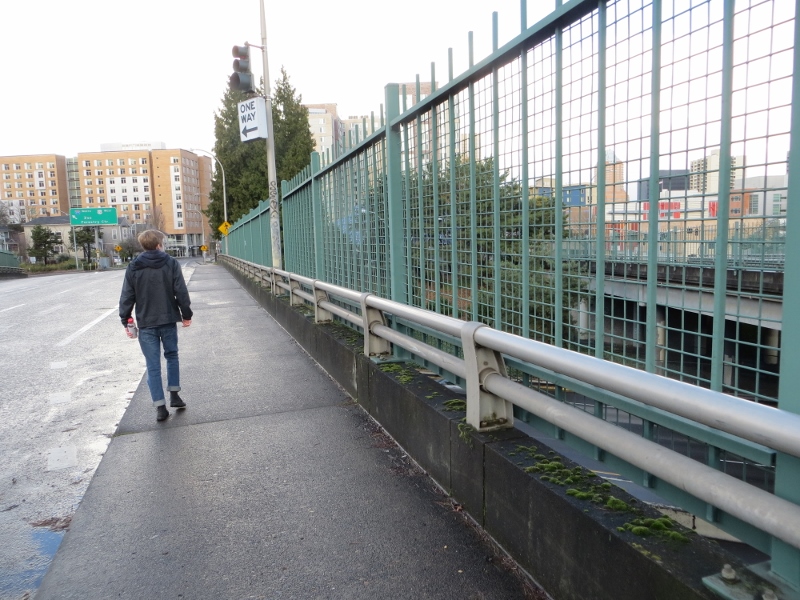 Notice how the city of Portland has raised the height of the barrier on the bridge over the expressway. Many expressway bridge barriers are way too low for a safe and pleasant walk.

I hope you, too, have a chance to walk in “foot friendly” Portland. I’m sure you’ll discover something new. And if you need some ideas, feel free to check out some of the other Portland posts for ideas.

Get the Book: Gentle Art of Wandering

Also Available: Long Distance Hiking on the Appalachian Trail for the Older Adventurer