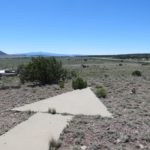 In the early days of commercial aviation and air mail service, airplane pilots relied upon light beacons and enormous concrete arrows on the ground to find their way across the country. These navigation aids were built by the Department of Commerce in the 1920s and early 1930s to promote air travel.

Eventually more than 1500 beacons were erected. They were spaced about 10 to 20 miles apart along designated air routes. With a cruising speed of 90 MPH, a pilot of a Ford Tri-Motor airplane would be seeing a beacon or arrow every 6 to 12 minutes. Can you imagine looking for an arrow on the ground to figure out which way to turn?

With the advent of radio navigation and faster airplanes later in the 1930s, the beacon network became obsolete. As a result, the beacons were gradually deactivated and taken down.

Many of the beacon foundations and giant concrete arrows are still out there for you to discover. With over 1500 of them there is a good chance that one is not too far from where you live. Think about how cool it would be to stumble on one the next time you go out on a hike! 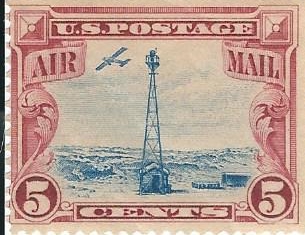 The Post Office even issued 5 cent air mail stamp in 1928 of a beacon in the Rocky Mountains.

My first encounter with the beacons was a couple of years ago when my friend Bob Julyan was working on his book, Hiking to History. He even has a chapter in the book about the beacons. (The dogs and I accompanied Bob on many of his research hikes for the book.) I thought at the time that it would be very cool to find a concrete arrow while hiking in backcountry. But without a good starting point, I let the thought of finding one slip to the back of my mind.

Two months ago while looking for a location in a map atlas (The Roads of New Mexico) I spotted by chance the notation of “Beacon” on the map. This accidental discovery resurrected the idea of actually finding a concrete arrow on the ground and spurred me to pour through the entire atlas to find more beacon notations. I then followed this up by checking web sites, looking at topo maps, and using Google Earth to pinpoint the location of well over two dozen beacon foundations and more than a dozen intact concrete arrows across New Mexico. 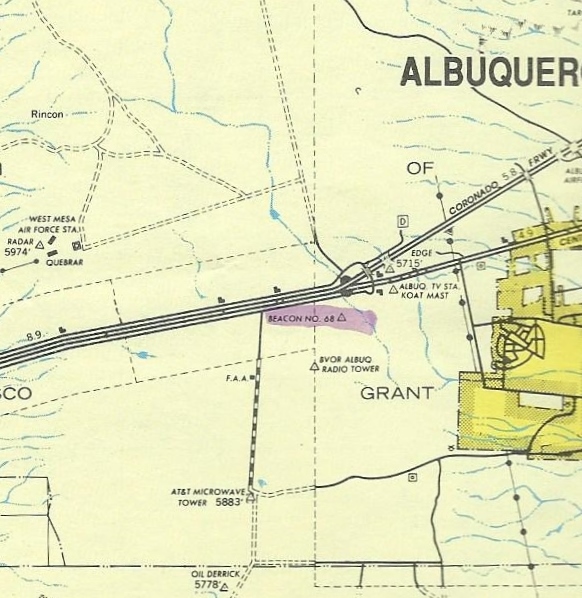 This is a scan from the atlas, note “Beacon No. 68” (shaded in purple). The number 68 refers to the beacon being 680 miles from the starting point of the airway route in Glendale, California. Some of the atlas notations actually say “Airway Beacon.”

(This accidental discovery of a beacon notation on a map that spurred a new wandering adventure is a perfect example of one of the basic tenets of wandering (one thing always leading to another thing) that is described in the book The Gentle Art of Wandering.)

Getting to all of the arrows is still a work in process for me. But I can at least show you a glimpse of what they look like in case you would like to look for some near you.

Please note that there is a good chance that you will not be able to get to some of them because of trespass issues. For those, you will have to be content with looking at them through Google Earth. 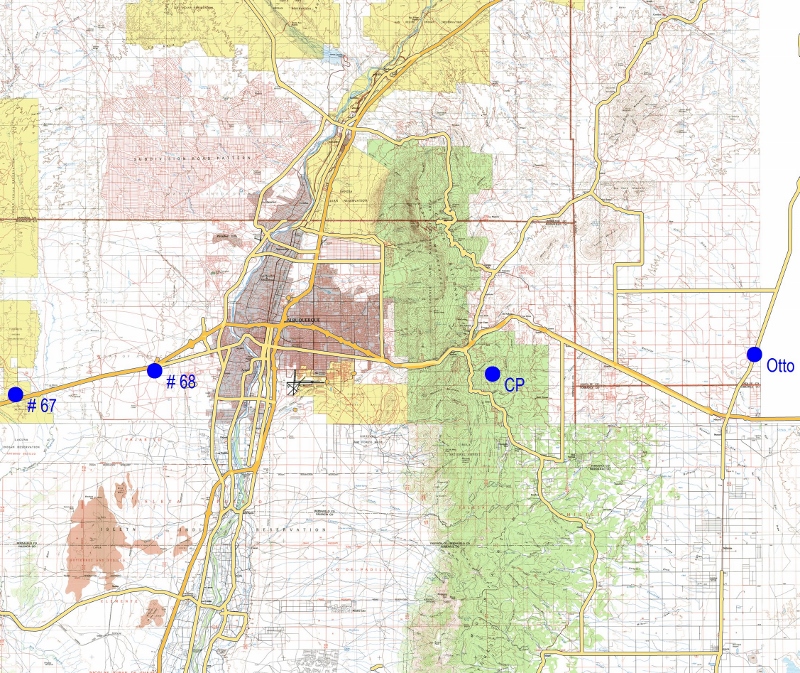 This map shows the airway beacons (marked in blue) on the airway route from Los Angeles to Amarillo as it passes over the Albuquerque area. Beacons 67 and 68, as mentioned earlier represent the distance from the starting point in California. CP stands for Cedro Peak, the highest point in the Manzanita Mountains. Otto is the location of a emergency landing strip. Emergency landing locations were located at regular intervals all along the route. 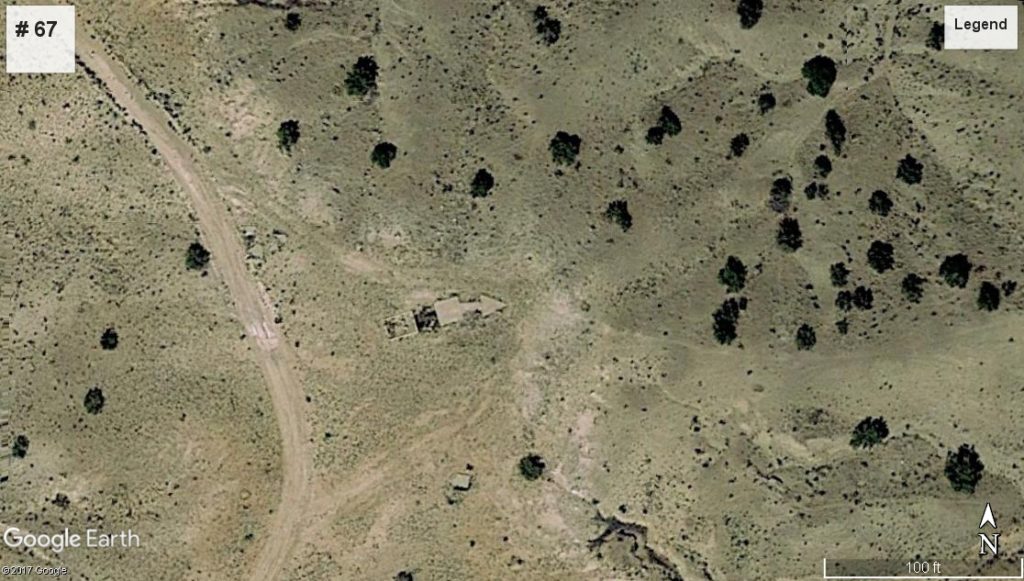 Here is what the Arrow # 67 looks like from Google Earth. 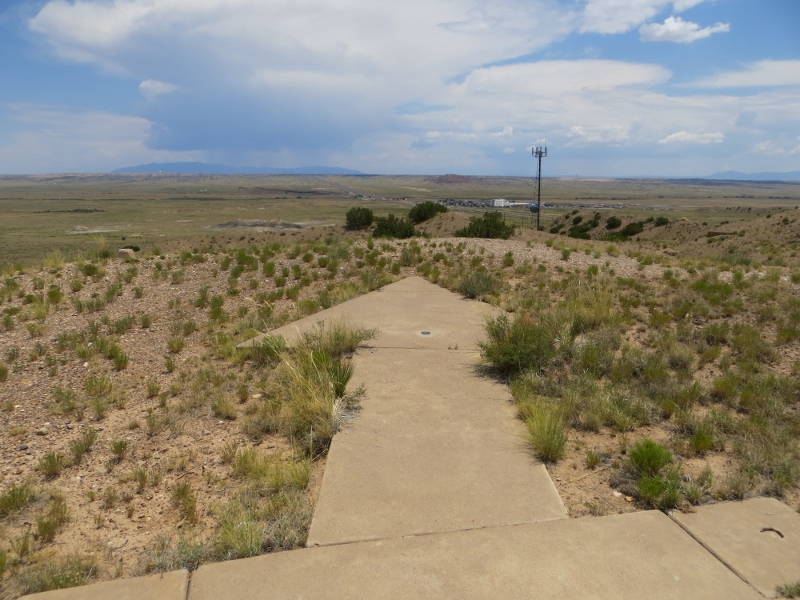 Here is what the arrow looks like on the ground. It’s pointing towards Albuquerque. The white building to the right of the arrow tip is Route 66 Casino. 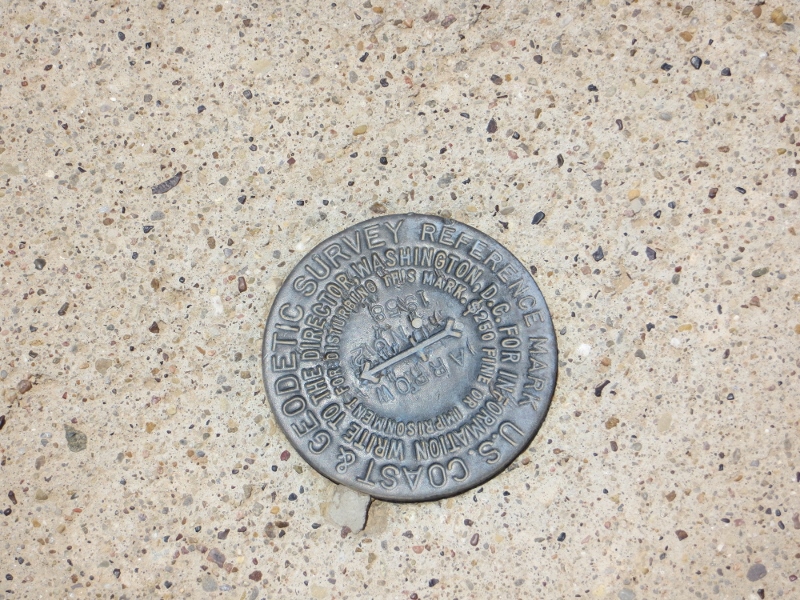 The arrow even has an official survey marker. 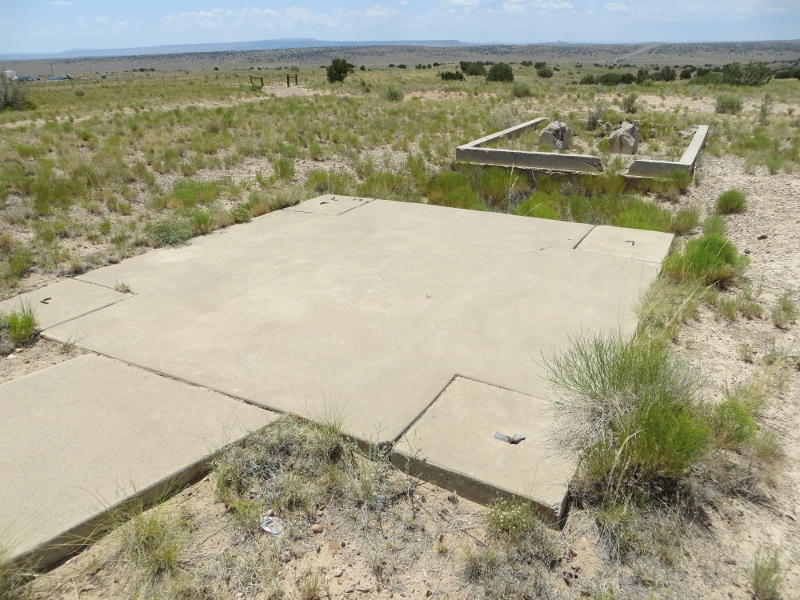 This is the base of the beacon. You can still see where the posts were. 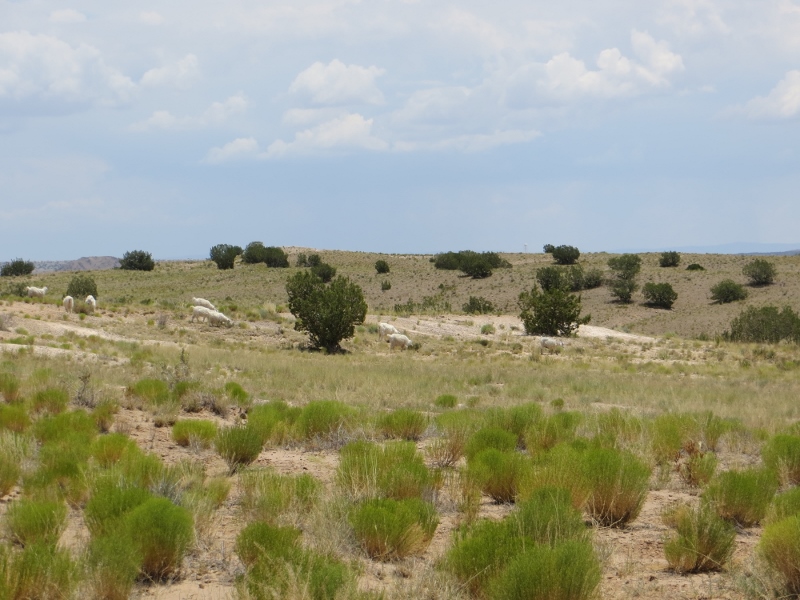 Beacon 67 happens to be located on Navajo land. The dogs and I had permission from a local Navajo to visit the arrow. He even showed us the best route to get to the arrow. Along the way we passed some Navajo sheep. 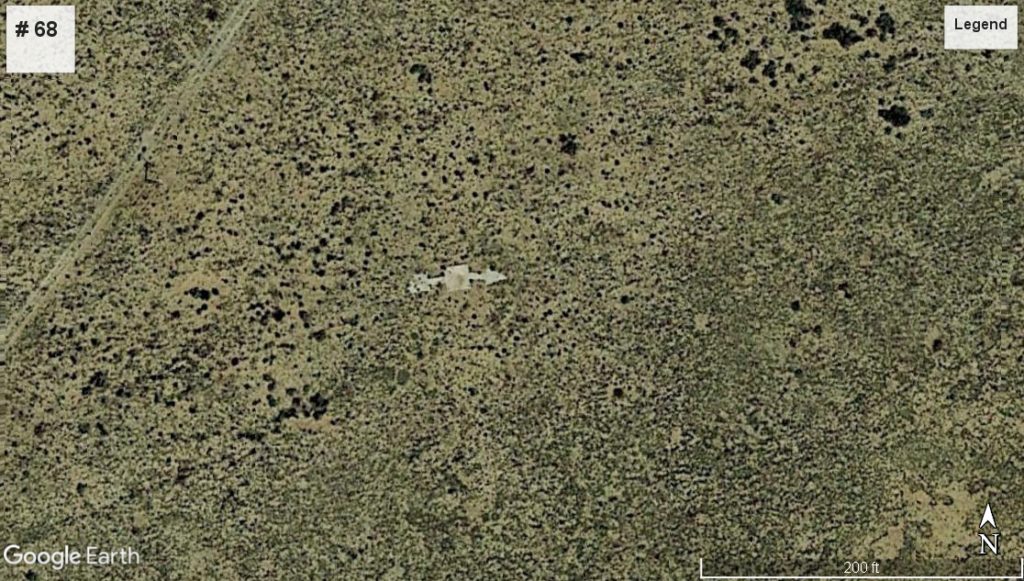 This is what Beacon # 68 looks like from Google Earth. The bend is the arrow is telling the pilot to change directions and compass settings. 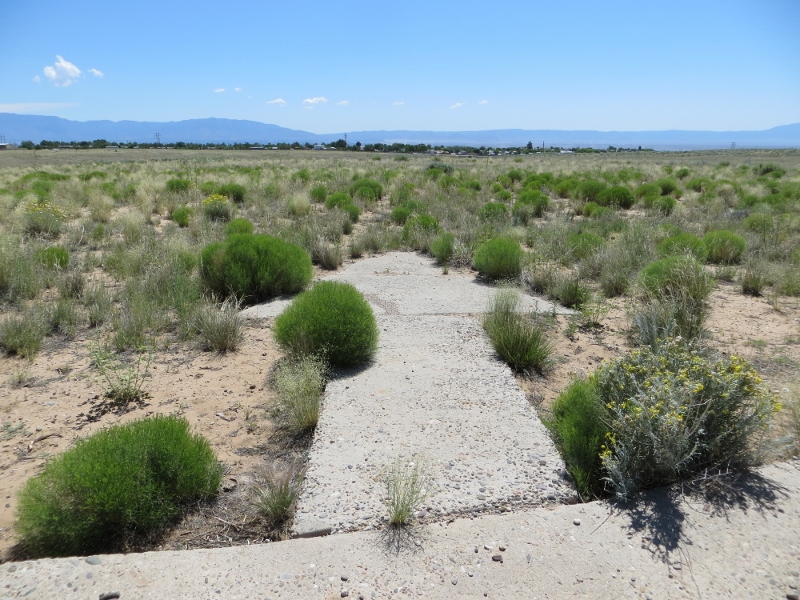 This is the arrow from the ground. Note that the arrow is pointing to a low spot in the mountains to the east and directing pilots away from the Sandia Mountains to the left. Beacon # 68 is just outside of Albuquerque and several hundred feet from old Route 66. 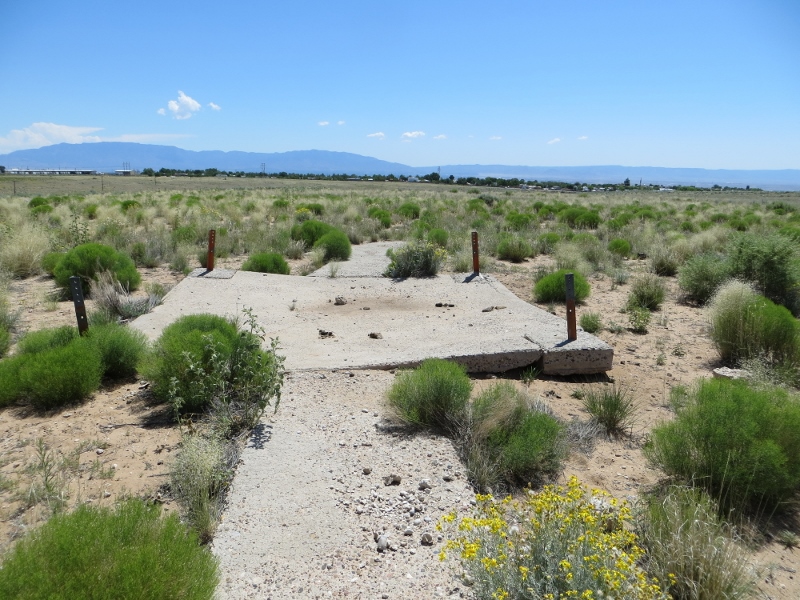 And here’s the base of the beacon. 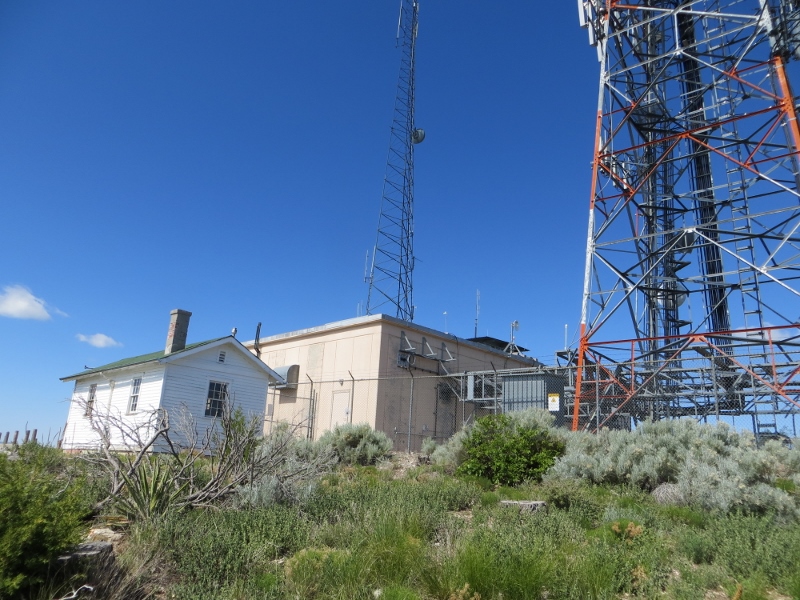 Cedro Peak to the east of Albuquerque no longer has an airway beacon, but it still has plenty of towers. 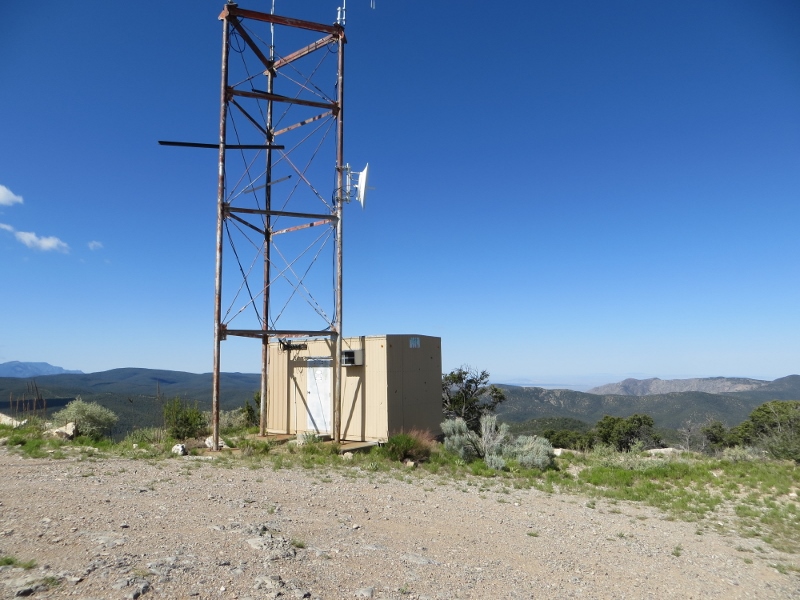 I couldn’t find an arrow on Cedro Peak, but this is the view looking to the west toward Beacon # 68. 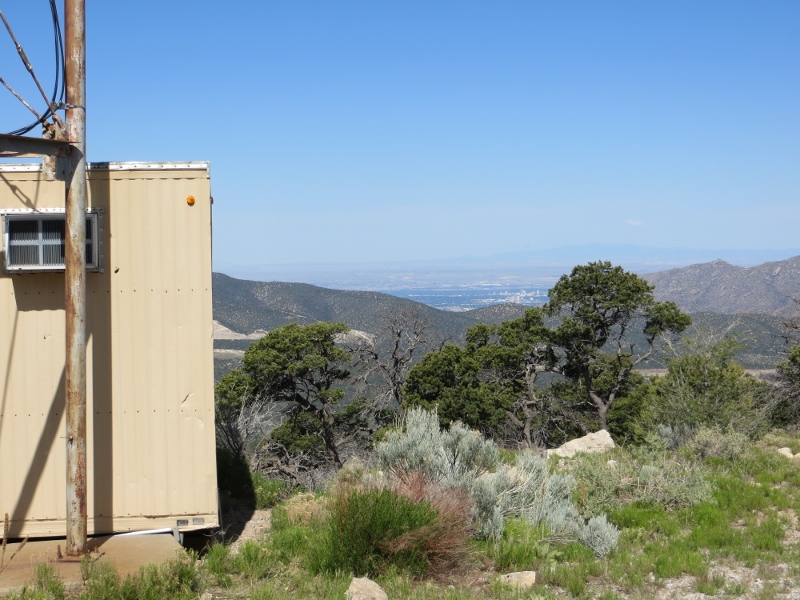 This view to the west gives you a better look at Albuquerque way down below. 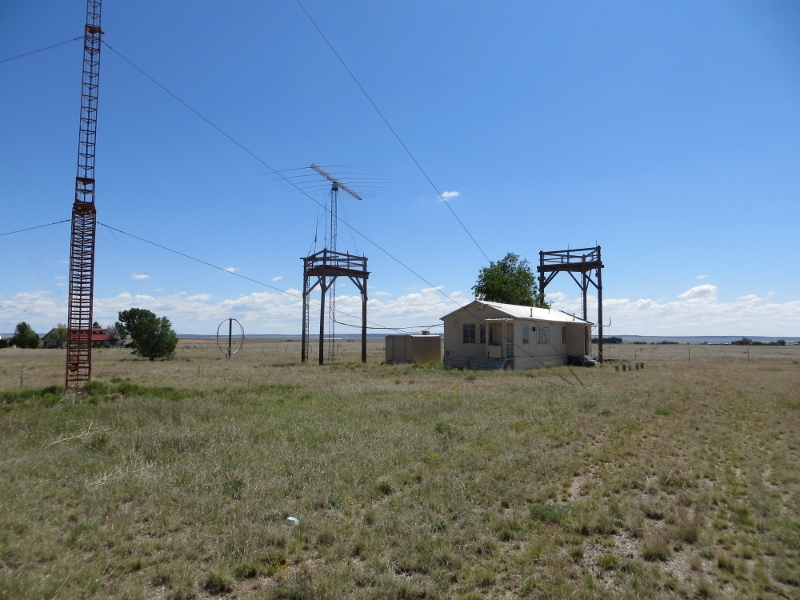 As mentioned earlier, Otto had an emergency landing facility. It has a completely different look and feel than the other beacon sites. I did not find any concrete arrows on the ground. 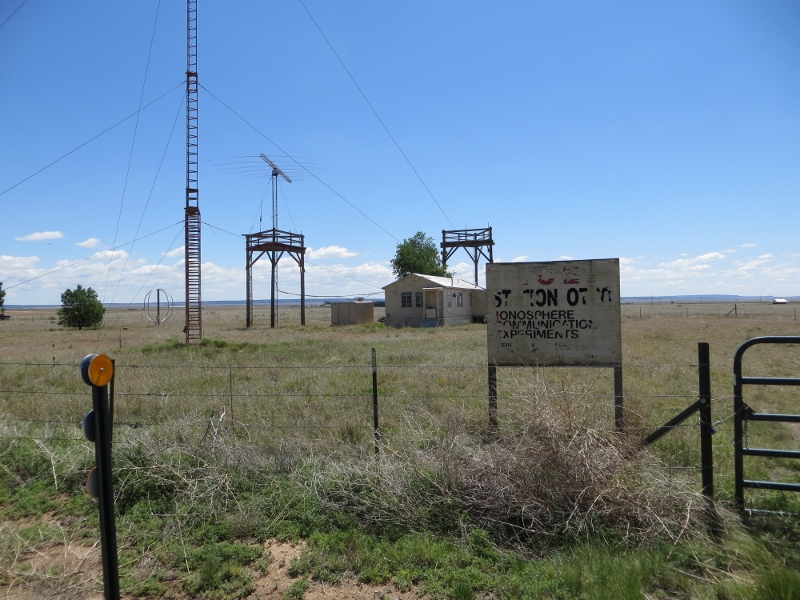 As the faded sign indicates, Otto was once a scientific facility. The sign identifies the location as ICE Station Otto. (ICE standing for Ionosphere Communications Experiments.) I did a Google search on ICE Station Otto and found some very weird websites making very unusual claims about the location that would play very well on an overnight talk radio show.

Other Airway Beacons to Visit 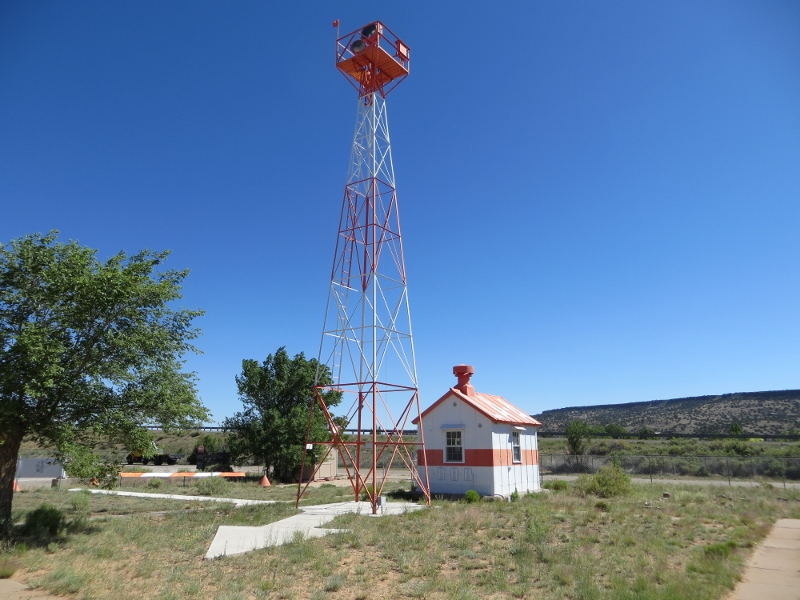 If you want to see a reconstructed beacon and arrow, you can drive out the Grants – Milan Airport a little more than an hour west of Albuquerque. There you will find a museum on aviation history and more information on the beacon network. 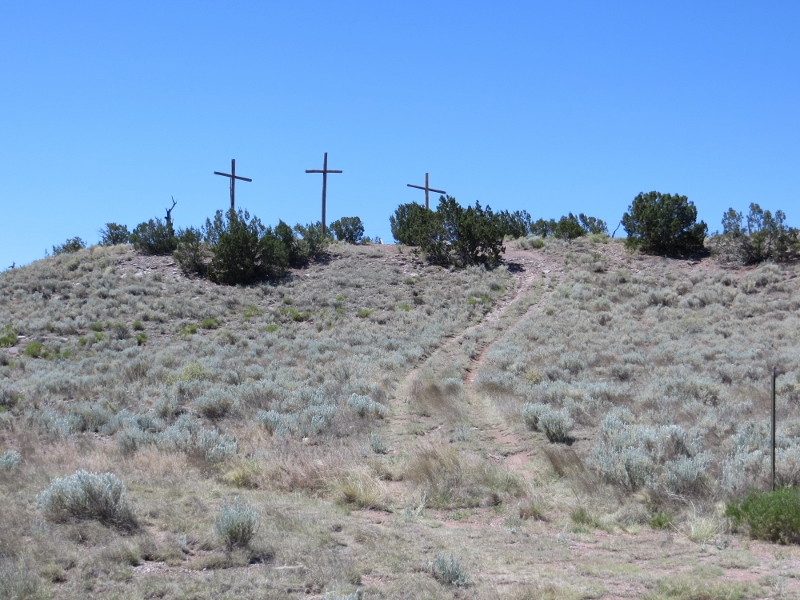 As you drive into Prewitt, look for these crosses. When you see them, park your car and walk up this old dirt road. 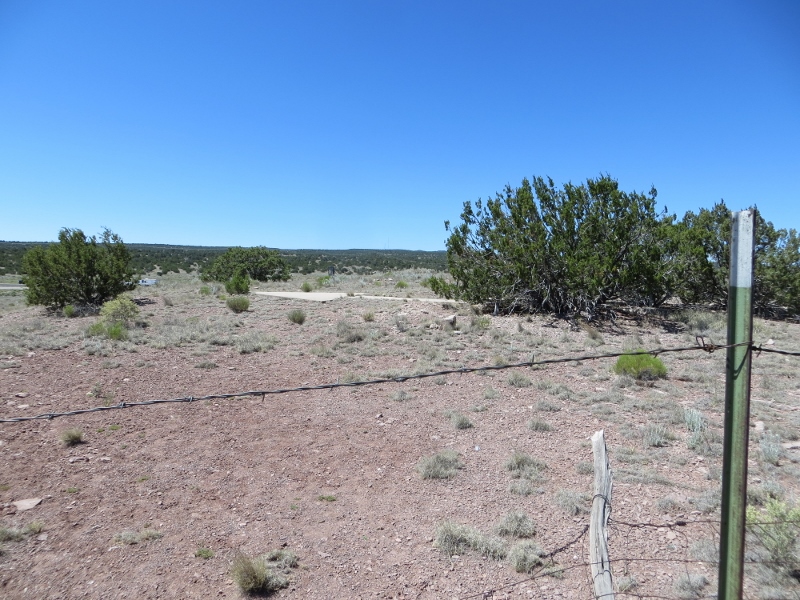 When you get to the top of the hill, the arrow is just beyond this half-torn down fence. You can see part of the arrow in the picture. 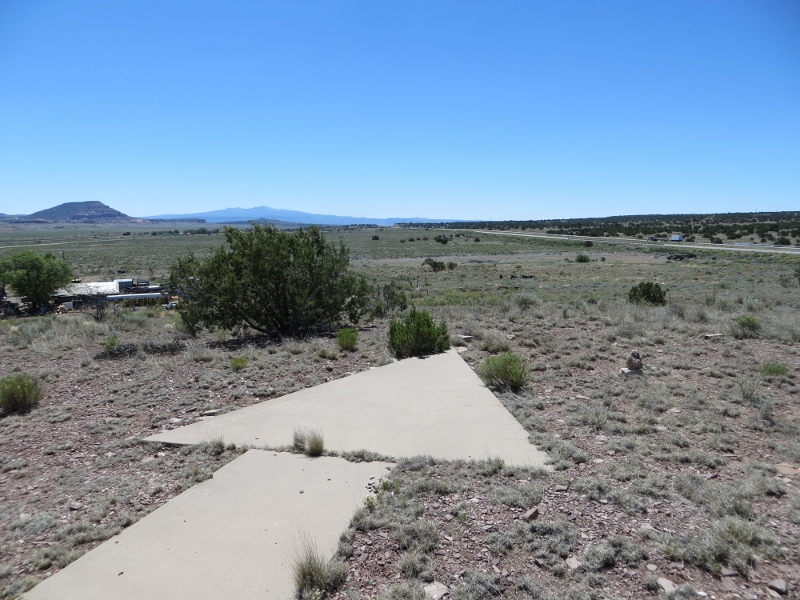 And here’s the arrow. You can see how it’s directing pilots to fly to the right of Mount Taylor (off in the distance to the left). Interstate 40 is to the right; old US 66 is to the left. To the left of 66 is the BNSF main line. You are standing in the middle of one the most important transportation corridors in the country. Over 90 trains and countless number of trucks pass this way every day. 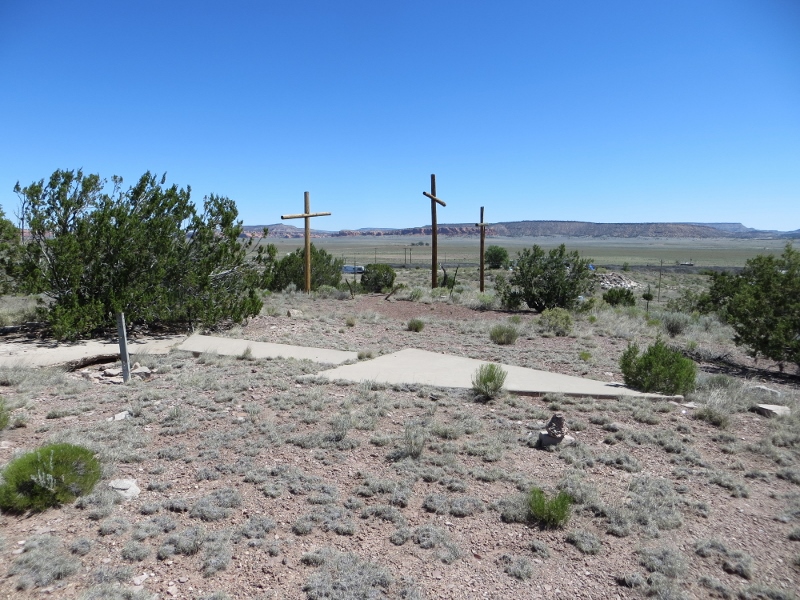 Here’s how close the arrow is to the crosses. 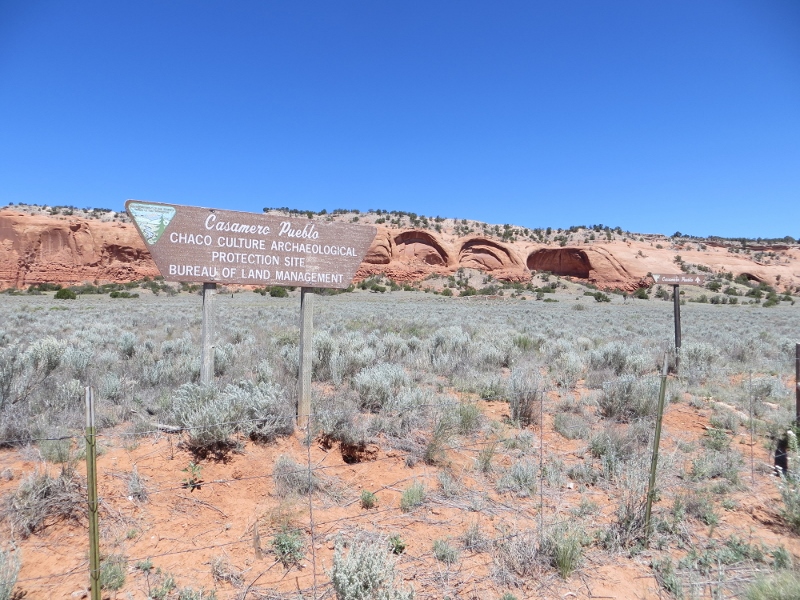 While you’re in Prewitt, you may want to drive 4 or 5 miles to the north and visit an ancient ruin at Casmero. 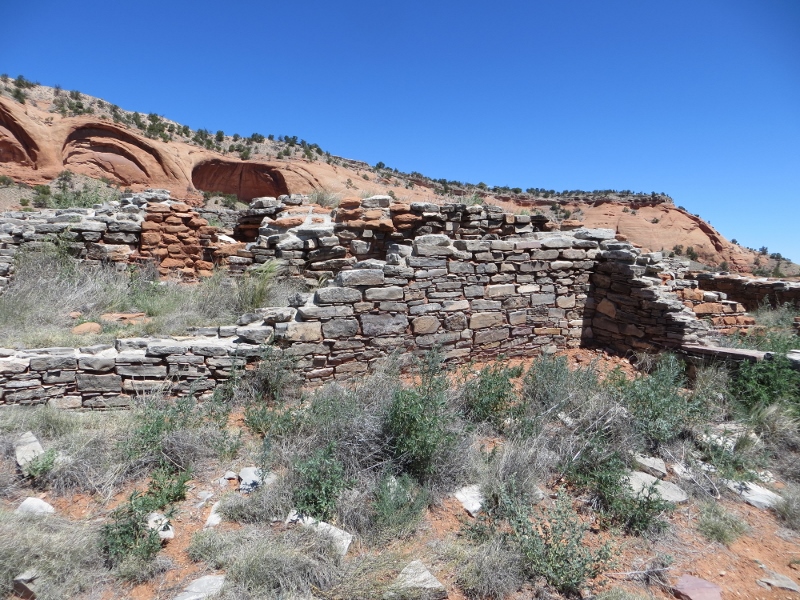 I have visited other airway beacons and will write about them in future blog posts if there is anything special about them. In the meantime, as you can see, there is no shortage of places to explore and to have an adventure. Thank you for visiting!