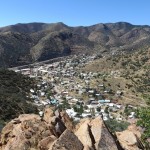 Last week my dog Petey and I returned to Bisbee, Arizona to get more information for a possible guidebook to the Bisbee stairs. To learn more about Bisbee and its stairs please read the previous blog post, “Stair Wandering in Bisbee”.

And it’s a good thing that we did go back. We found some great hiking trails to include the guide and some stairways that we missed on the first time around. One of those stairways had 170 steps. It would be humiliating to put out a guide and miss a 170 step stairway.

But when a stairway begins between two old garages facing a Circle K parking lot, it’s not easy to find. 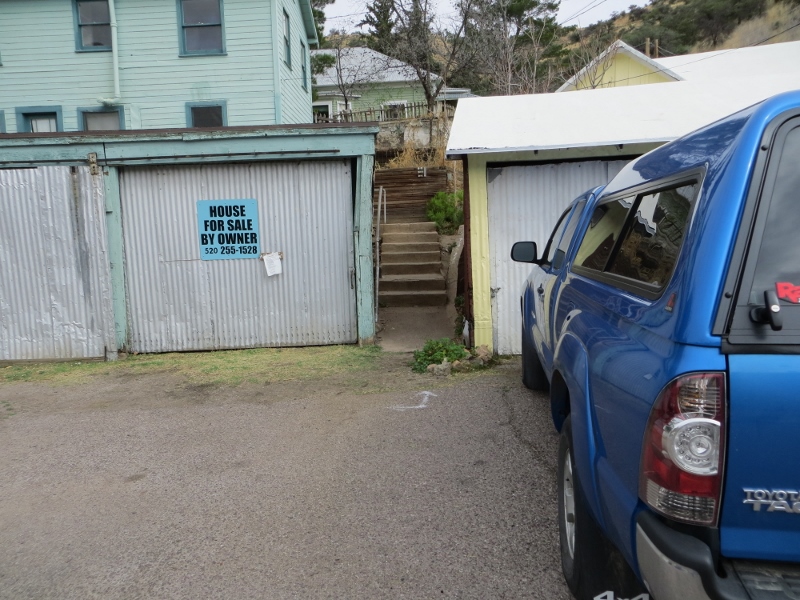 When I first noticed these stairs, I thought that they only led to the house behind the garage. 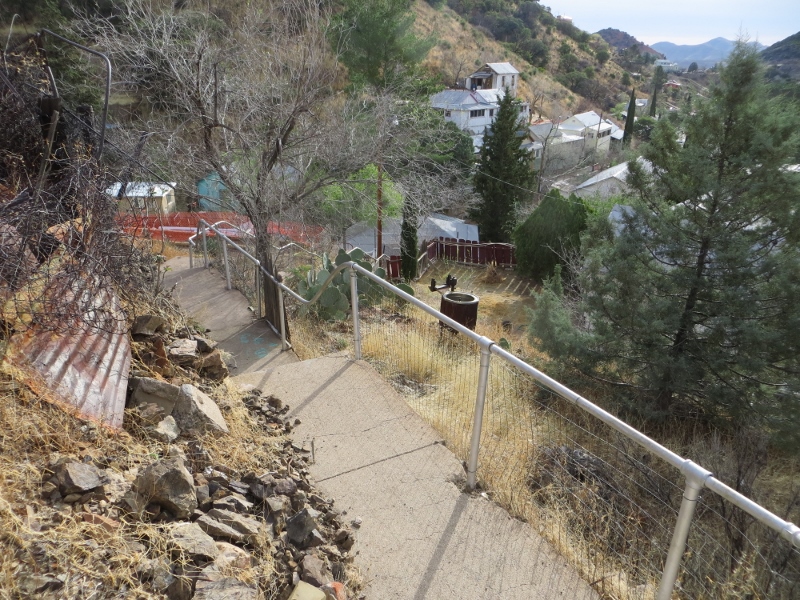 It never occurred to me that the stairs would change angles six times to work its way up the hill. 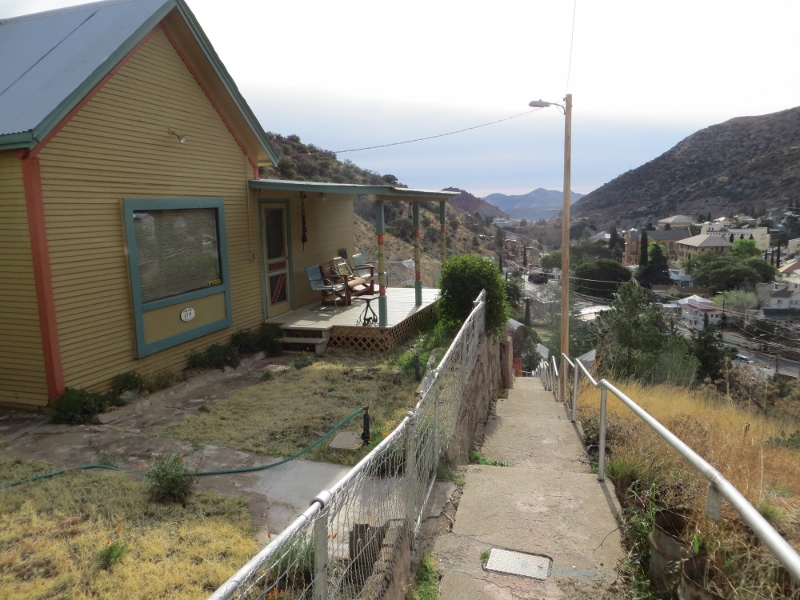 Or that the stairway would pass six levels of houses and building lots before reaching the top. 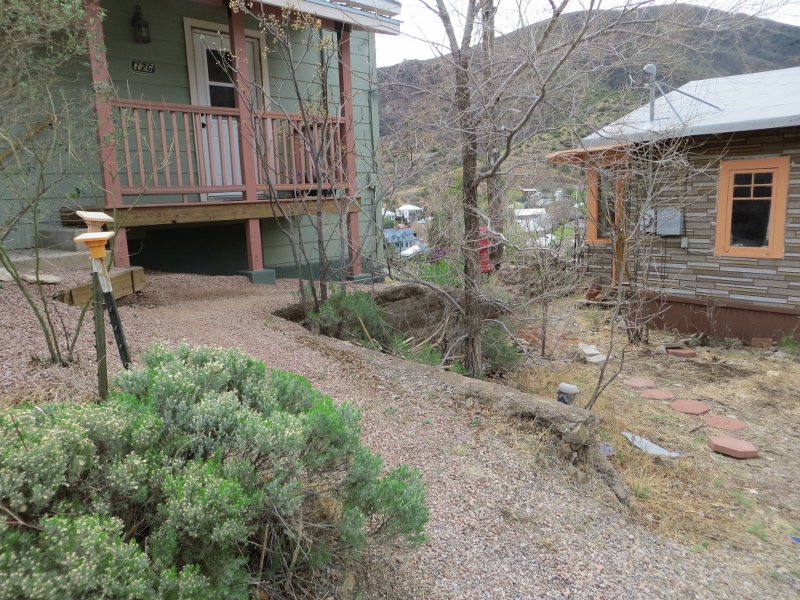 And finding the stairway from the top is even harder than finding it from the bottom. To get the top of the stairs, you have to follow this gravel path around the house. You’ll also have to walk under the back deck of the house.

Another stairway I missed the first time around looked like a blind alley to me from the sidewalk. 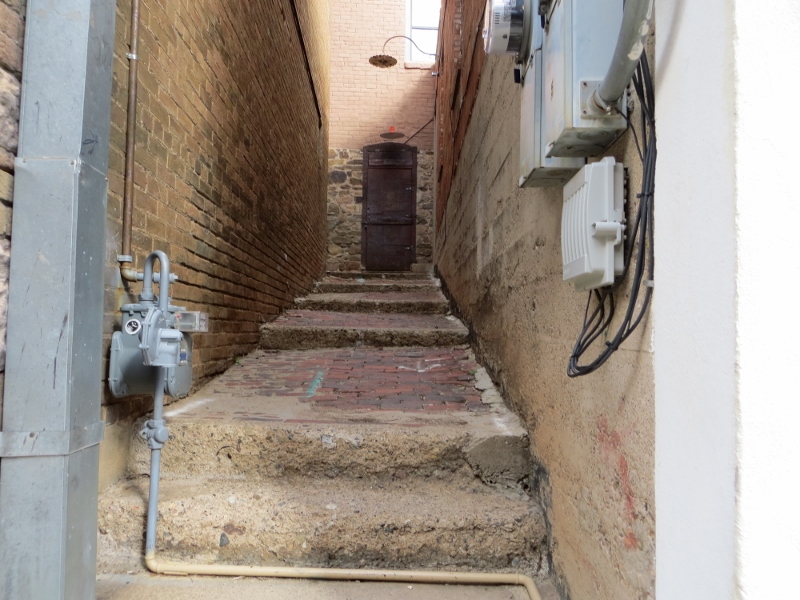 Little did I know that there was a stairway going off to the left. 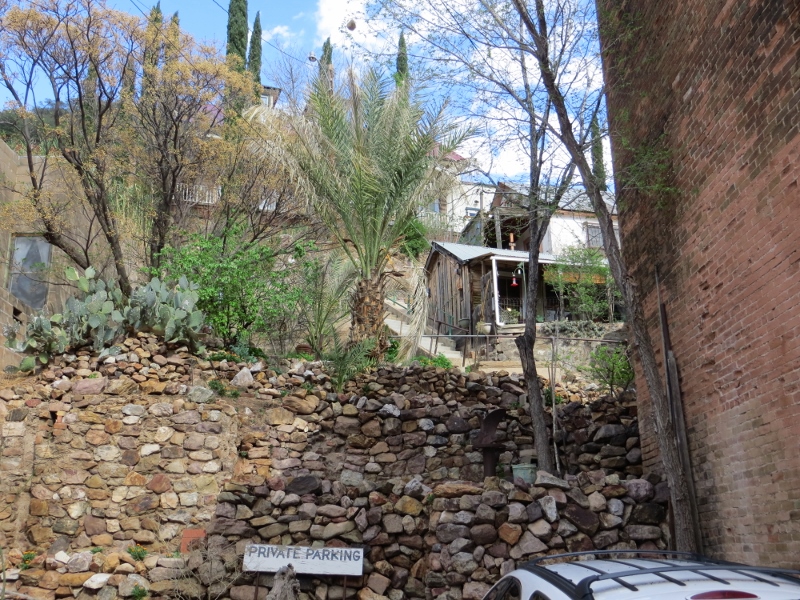 But if you walk past the building to the left of the blind alley, you can that there is a stairway going off to the left. It has 57 steps and passes by palm trees and several levels of houses on its way up.

To complete its role as a walker’s paradise, Bisbee also has great hiking trails that you can find while climbing the stairways.  None of the them have trailhead signs, but if you look closely, you can find them. And when you do, you’ll have some great walks. I hope to include as many trails as possible in any Bisbee stair guide. 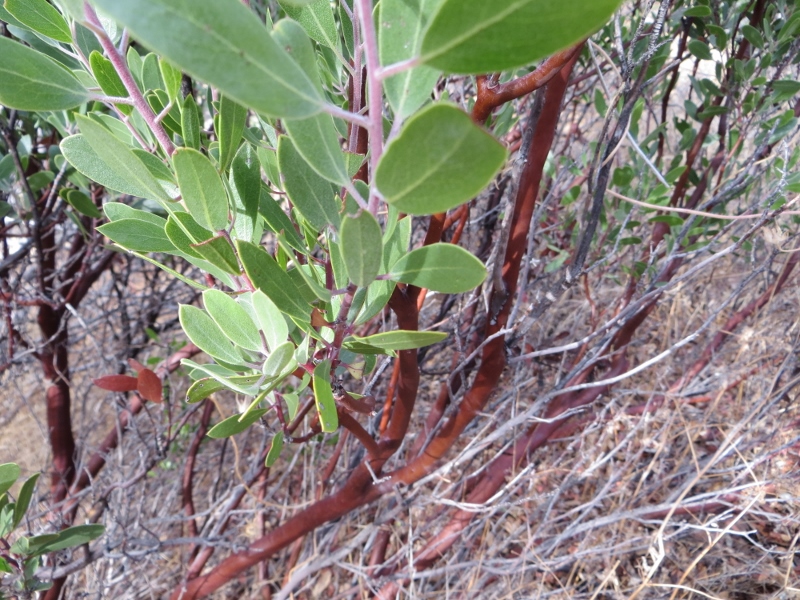 When you walk along a trail, you’ll find high desert vegetation such as this manzanita with its red bark. 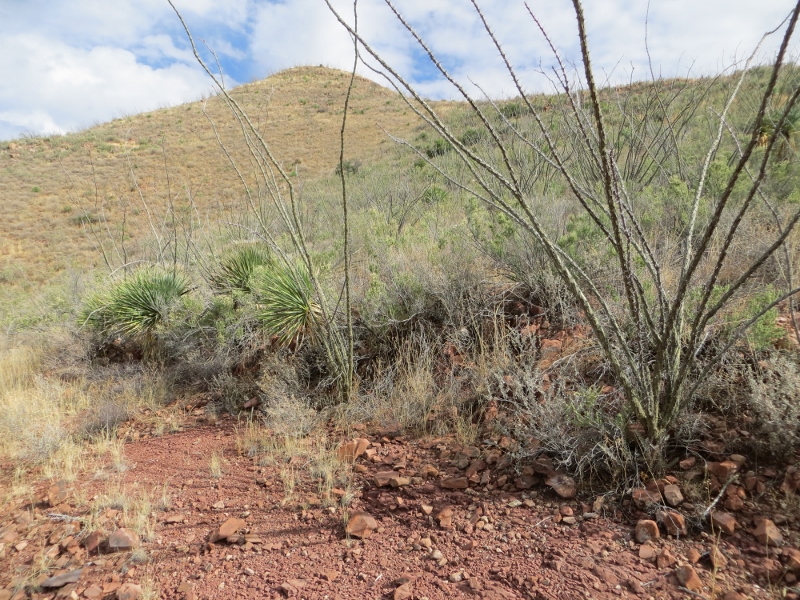 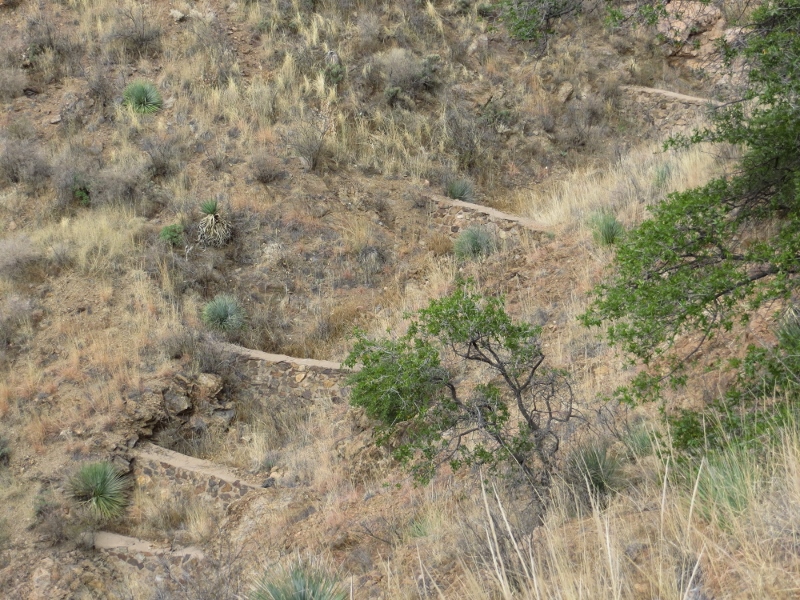 And you might spot small dams built by the CCC in the 1930s for flood control. The concrete stairways are also a 1930s project by the WPA. 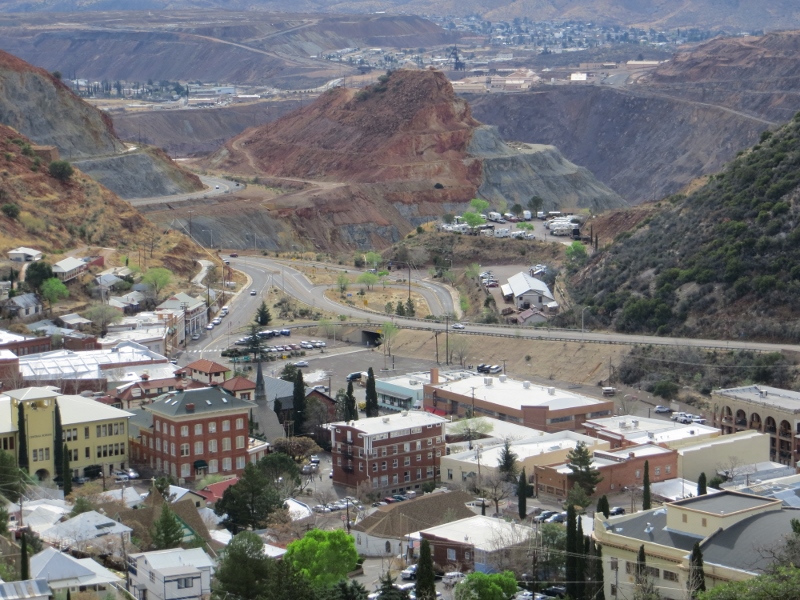 Or you might get a good view of the open pit mine that was closed in the 1970s from high above Bisbee. 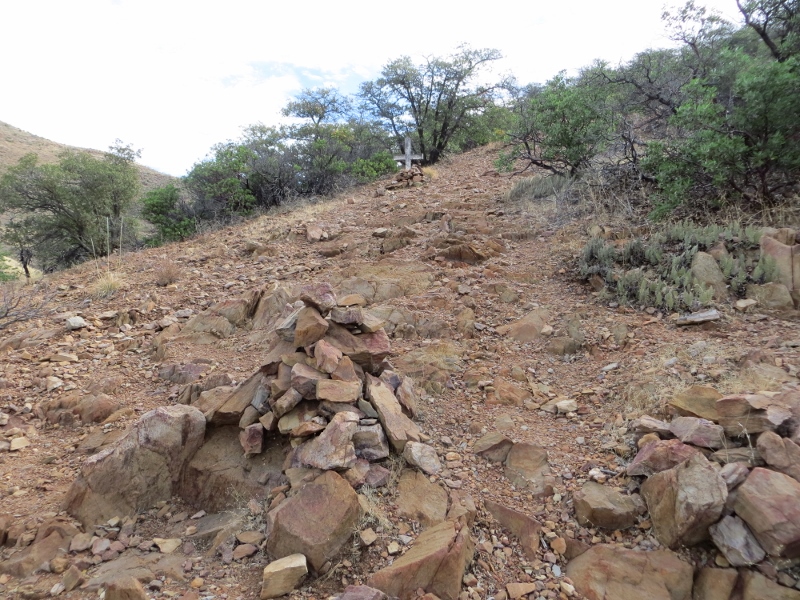 On one of the hiking trails you’ll see this cairn and cross. 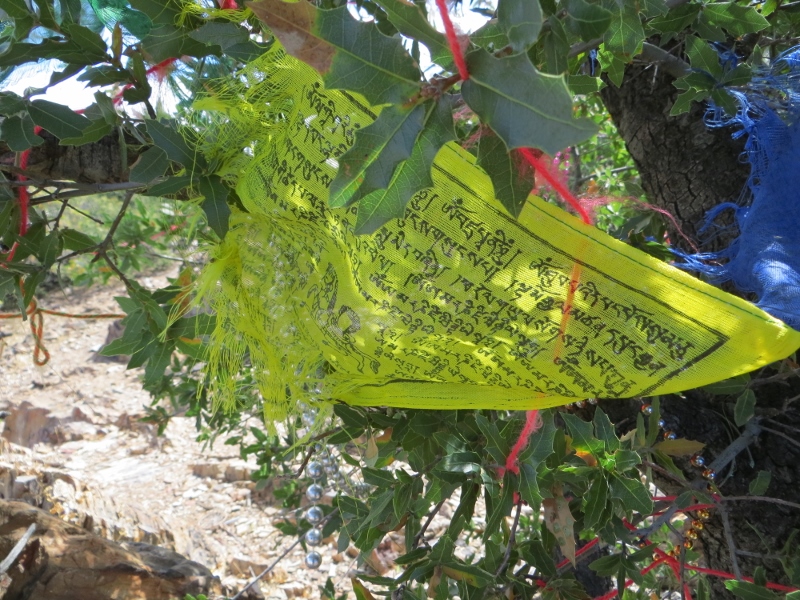 If you follow the braided path uphill, you’ll find an Emory oak full of prayer flags. 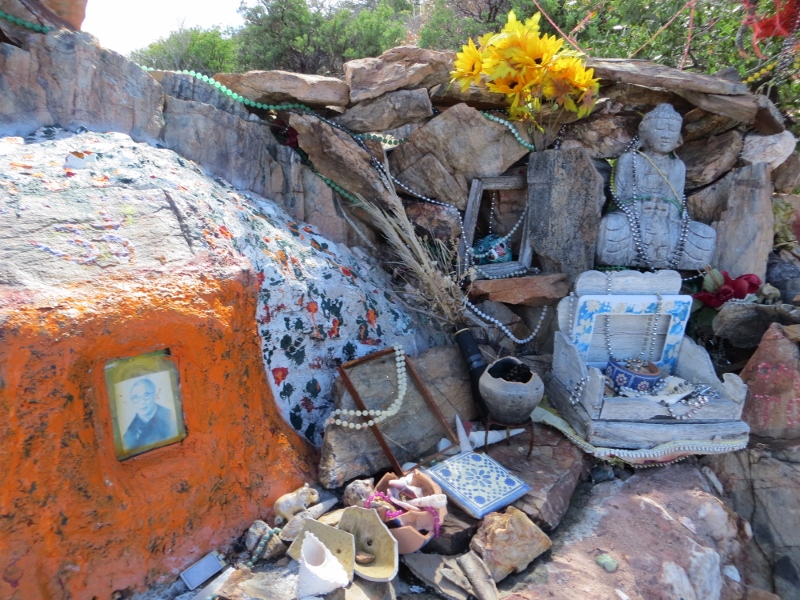 Beneath the oak are several Buddhist shrines including this one with a picture of the Dali Lama. 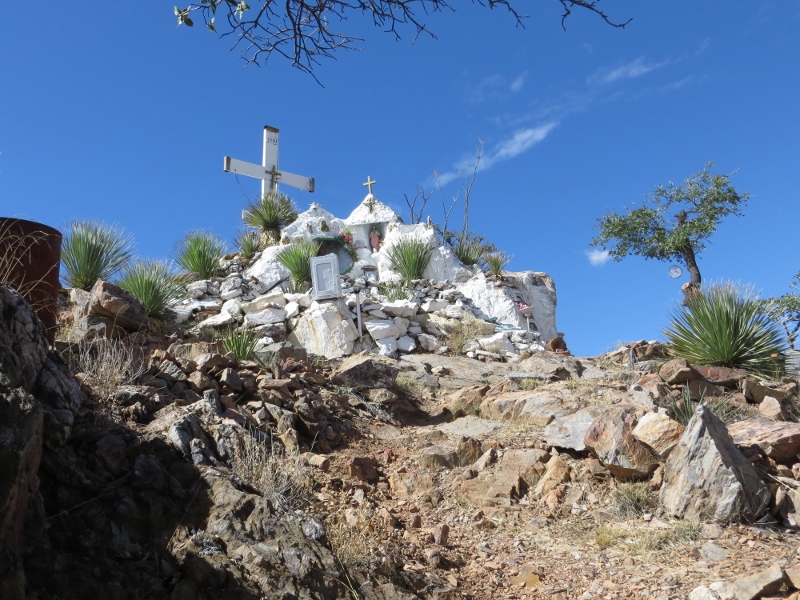 If you keep climbing, you’ll come to this Hispanic Catholic shrine at the top of the hill. 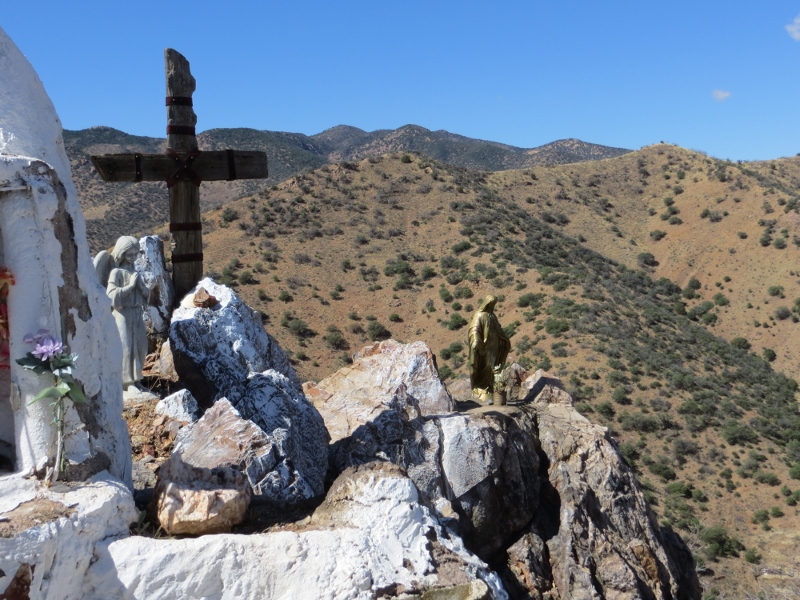 There are statues and niches everywhere. There’s even a barbecue grill and bench for having a picnic. 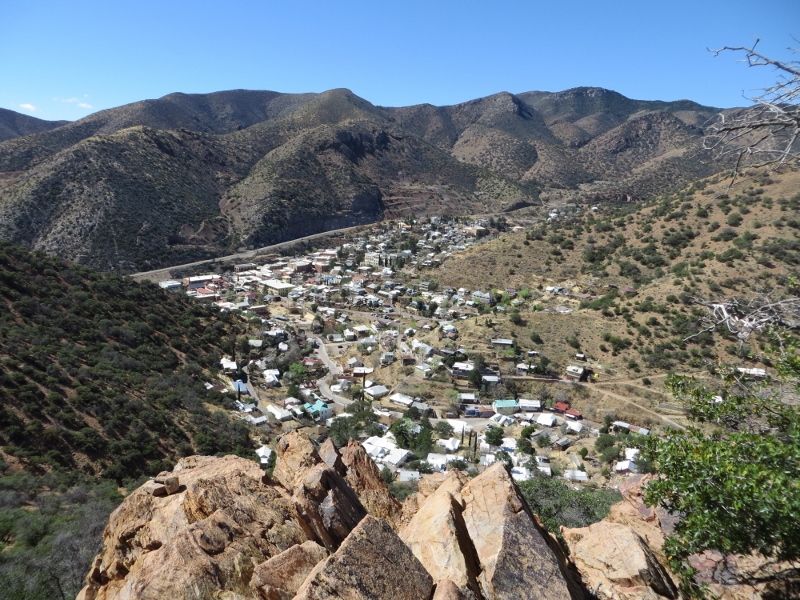 And you’ll have great views of Bisbee. 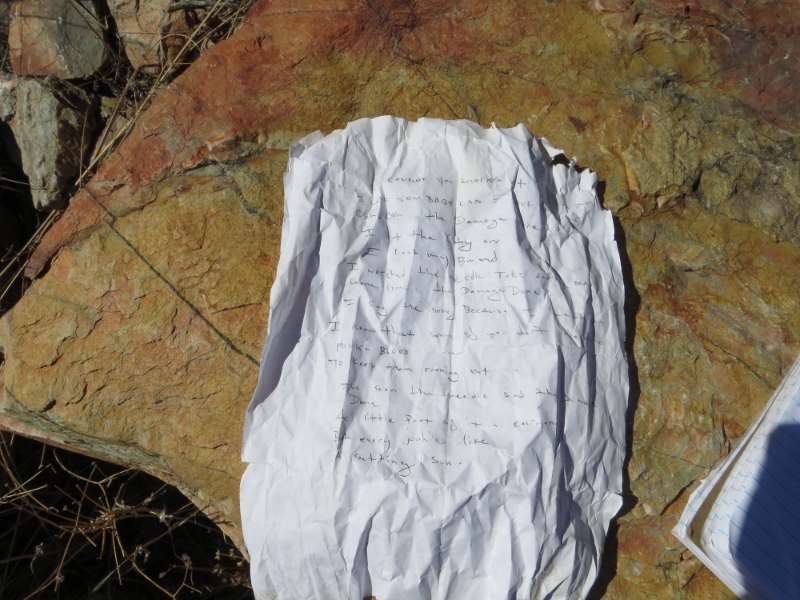 And next to the shrine I found this sobering letter about seeing a man die with a needle in his arm. Yikes!

After finishing our hike to the shrine, we continued wandering in Bisbee to check our facts and to find other items of interest to include in a stairway guide. I’m sure it will take a few more trips to Bisbee before a guide will be ready, but it will be time well spent as Bisbee is a great place to wander. I can’t wait to share all that Petey and I have found in Bisbee.