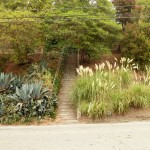 A few days ago I had the opportunity to go on a walk with Bob Inman. Bob is the author of A Guide to the Public Stairways of Los Angeles. The book describes over 260 public stairways within the city limits of Los Angeles.

If you’ve read any of the other posts in this blog about public stairways, you know that they are great places to wander and for exploring a neighborhood. I was especially excited to walk with Bob as he has an incredible knack for finding stairways and pedestrian friendly passages. I knew that there was much I could learn from him.

Bob and I met in downtown Santa Monica and immediately went down a stairway and overpass combination that took us off the bluff and down to the beach. We took a right and headed north to the Los Angeles – Santa Monica border. There we headed inland along Ocean Avenue. If you are interested in doing a similar walk, you can look at the section in Bob’s book about Rustic Canyon. Charles Fleming also has a Rustic Canyon walk in his book Secret Stairs: A Walking Guide to the Historic Staircases of Los Angeles.

As we walked up Ocean, we spotted a staircase on the other side of the street. It turned out that that particular staircase is not in the current edition of Bob’s guidebook. We decided to go up the stairs to see if they connected to anything else. When we turned right we ran into a dead end. When we turned left, we found a long walk that ended at another staircase that took us back Ocean. 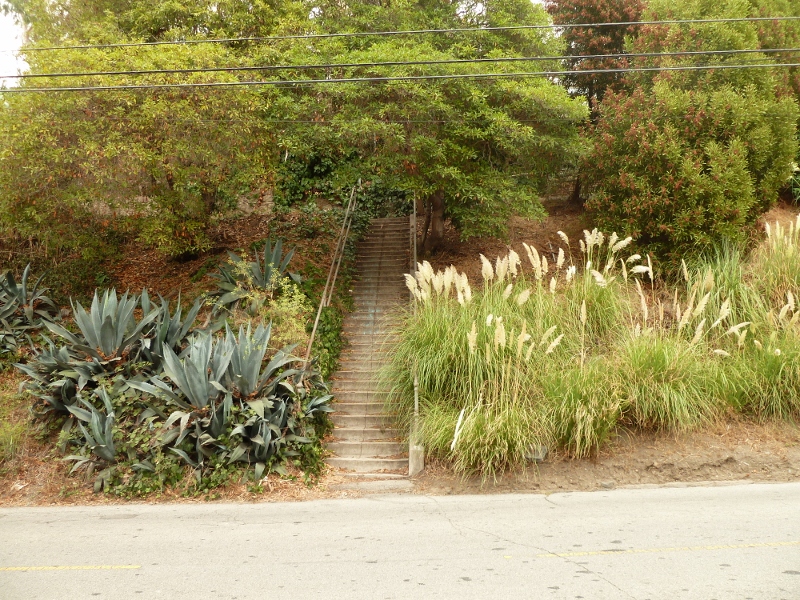 This staircase on Ocean Avenue is not in the current version of the guidebook. It will be in the next edition. 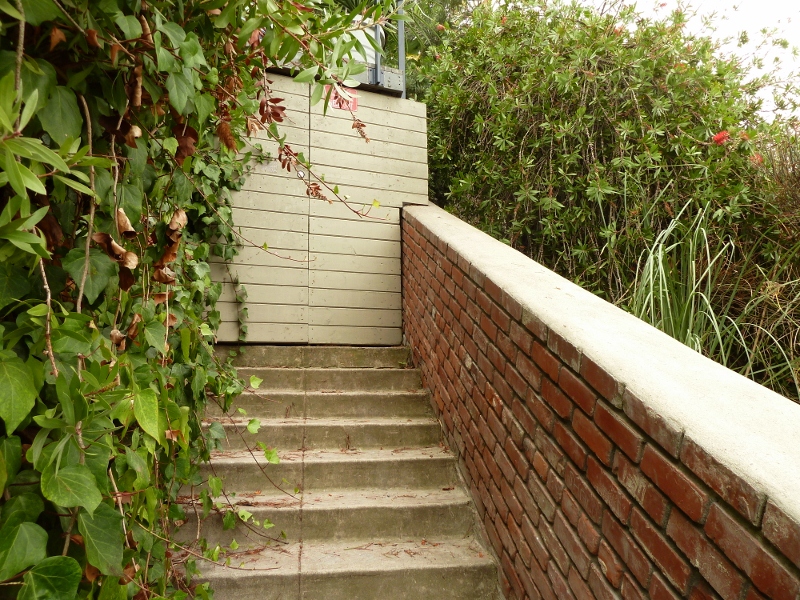 If you turn right at the top of the steps, you will eventually runinto this dead end. 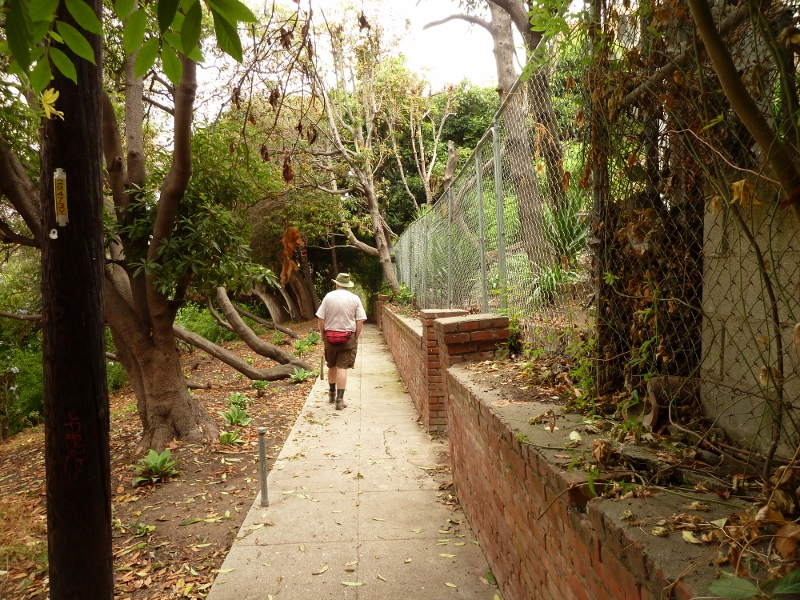 If you turn left, this walkway will eventually lead you to set of stairs that will return you to Ocean Avenue. That’s Bob walking in front.

This is a good example of one of the basic principles of wandering; that is, going out with “beginner’s mind.” When you are open to all of the possibilities, you are setting yourself up to make unexpected discoveries such as finding this walkway. It is the poking and probing around to see what you can find and where you can go that makes urban wandering and exploring so much fun. You can cover a route a dozen times and still find something new.

Bob took good notes on the stairs and will include them in the next edition of his guidebook. He also told me that he plans to expand the next edition of the guidebook to include pedestrian walkways, trails and shortcuts. It should be the ultimate resource for the Los Angeles area foot traveler, and I personally can’t wait for it to come out.

That new stairway we found led us right to the foot of the famous 4th Street steps of Santa Monica. The 4th Street stairway is very steep and with 189 steps it is the favorite place for many people to work out. As we climbed the steps, runners in both directions were squeezing by us. When we reached the top of the stairs at Adelaide Drive, there were people waiting for their turn to run down and then back up. If you’re an avid stair walker, you’ll find this a bit out of character as you usually have a stairway to yourself. 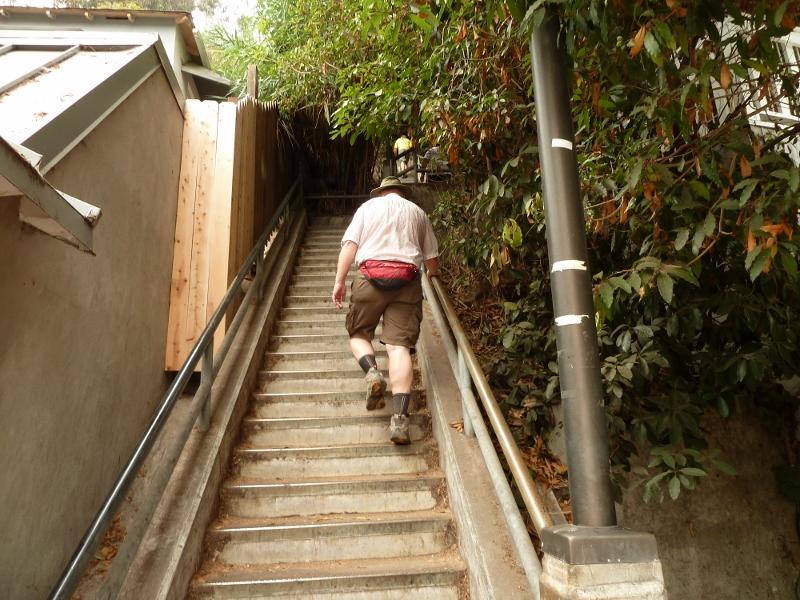 This is Bob going up the famous 4th Street steps. This is a very steep and very long stairway. 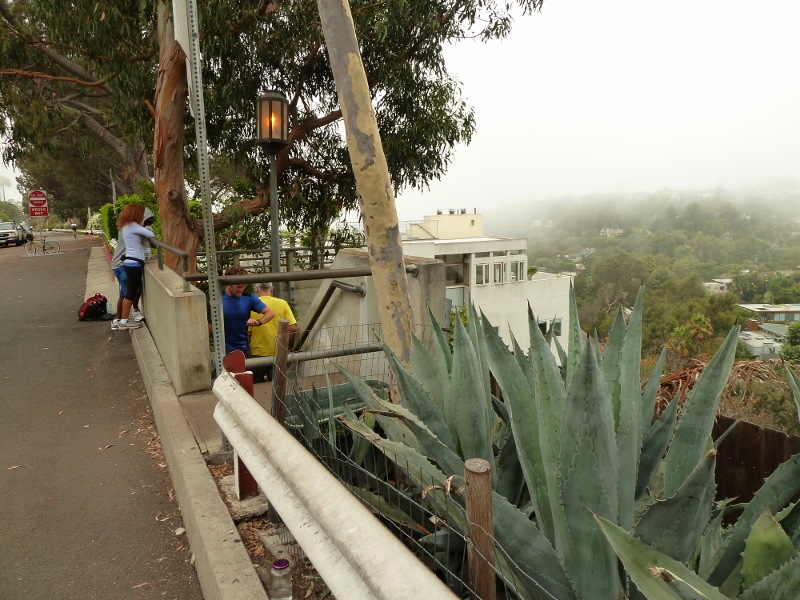 Here are a couple of runners reaching the top of the 4th Street steps.

We then headed east on Adelaide Drive to another stairway that is also a favorite work out place. 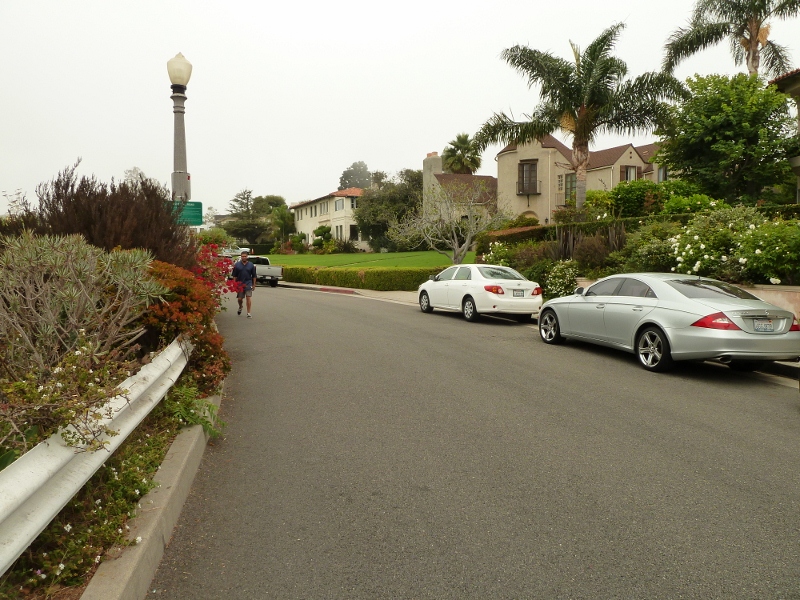 Heading east on Adelaide Drive. It would be hard for a street to be much prettier. 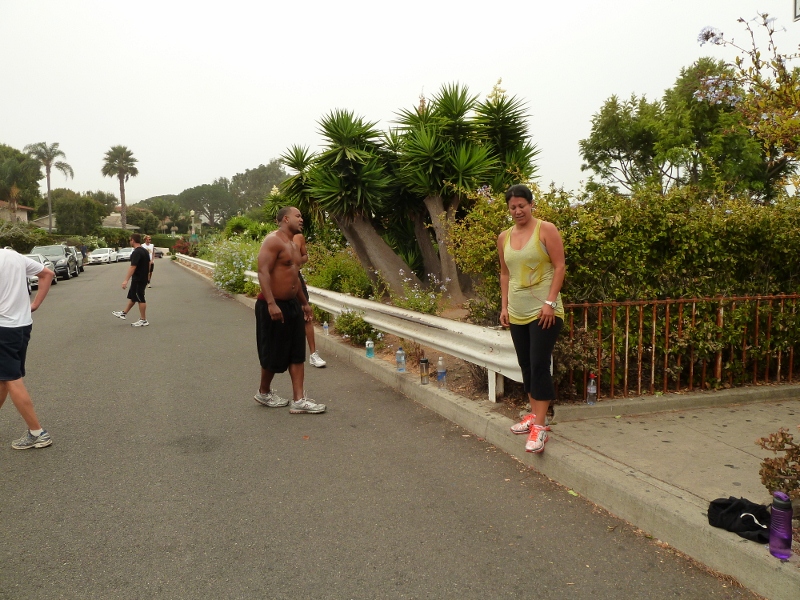 This is the top of the other favorite stairs for working out. Check out the water bottles on the curb. They’ll be retrieved when their owners finish their run. 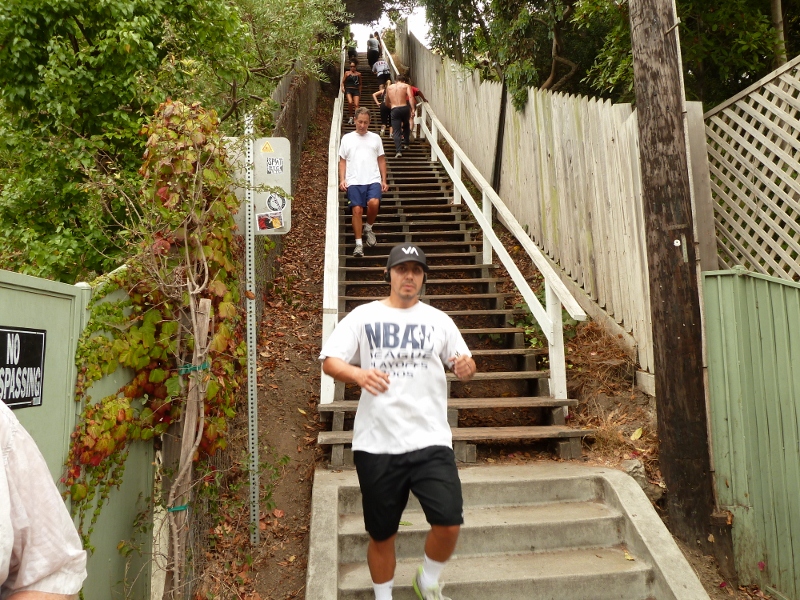 Here’s what it’s like further down the stairs. Our walk was on a Thursday morning. Can you imagine what this will be like on a weekend?

This time we went down. At the bottom of the stairs, we took a right and headed to the Rustic Canyon area where we would find more stairs and incredible houses. For the rest of the walk we had the stairs to ourselves. Here is what we saw along the way. 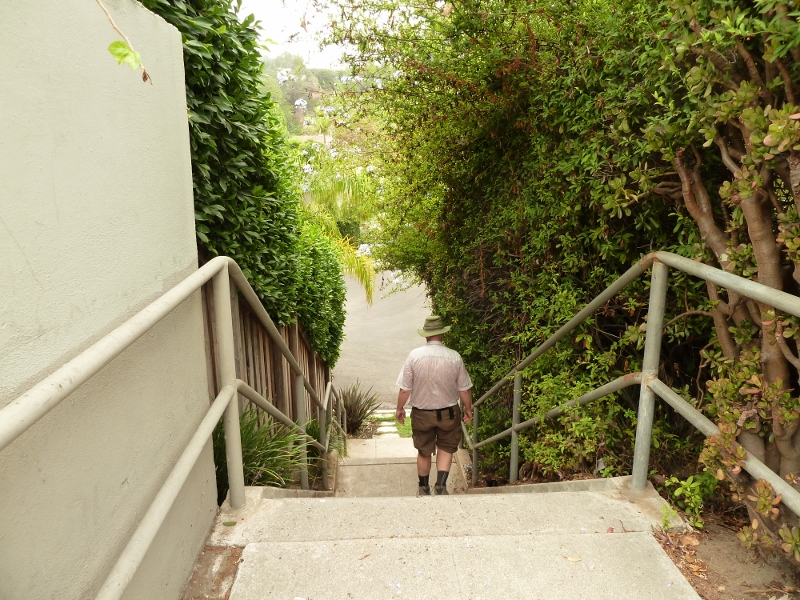 Not too many people on these stairs. 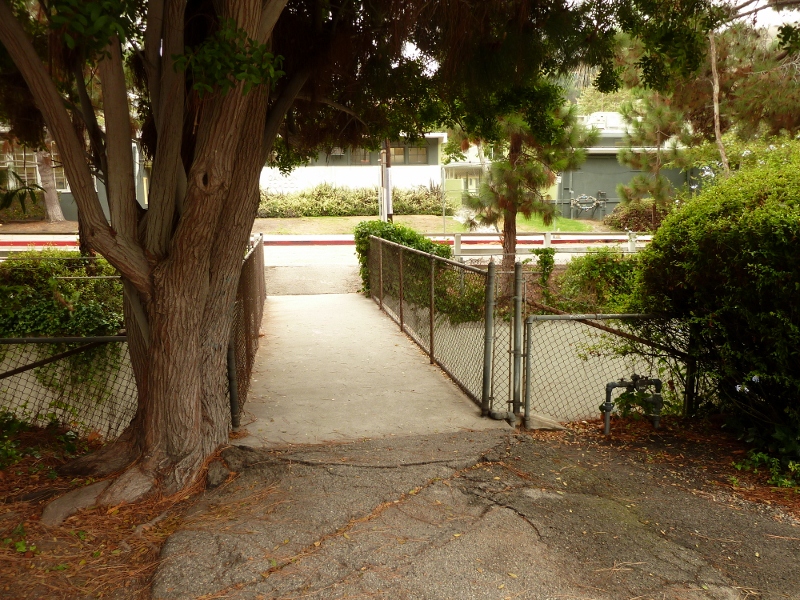 This is the type of pedestrian friendly shortcut that Bob will include in the next edition of his guide. 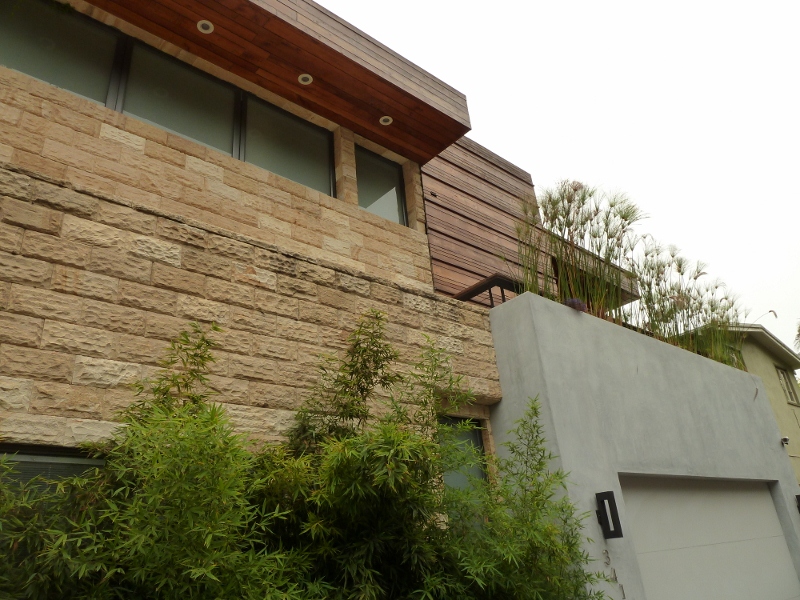 This almost looks like a Frank Lloyd Wright designed house. The architecture in the neighborhood is amazing. 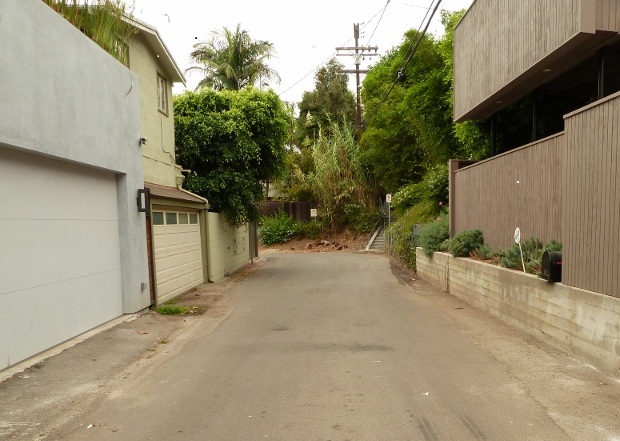 If you look ahead, there is a stairway heading off to the right. 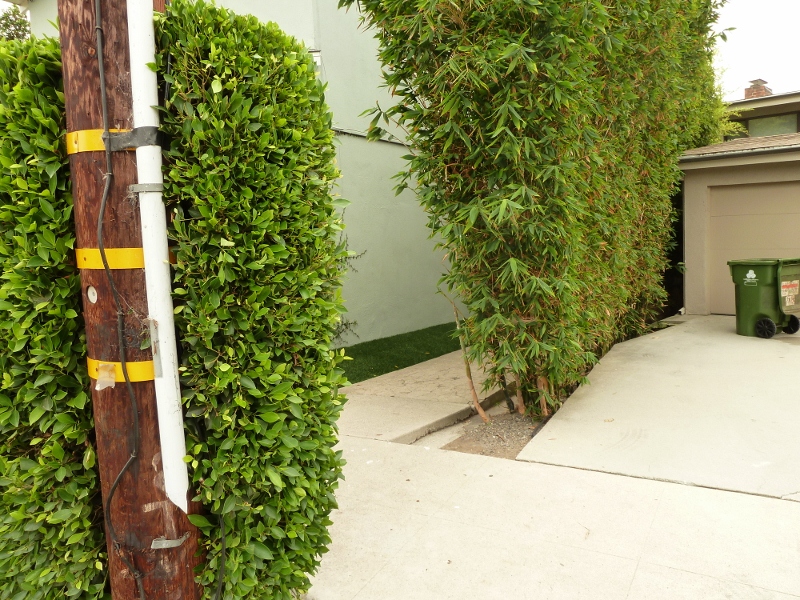 The top of those stairs are hidden by this shrub. if you didn’t know where to look or didn’t poke around, you might not find these stairs from this angle. 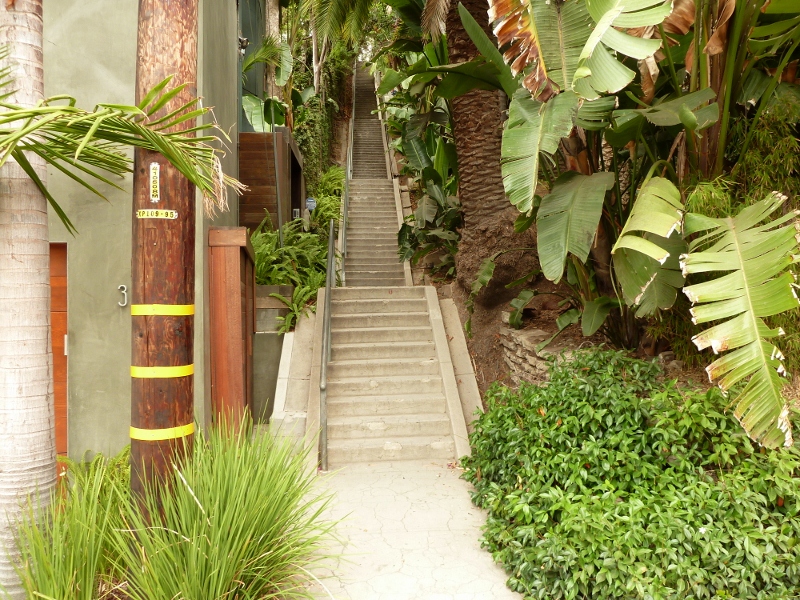 We soon found these stairs. 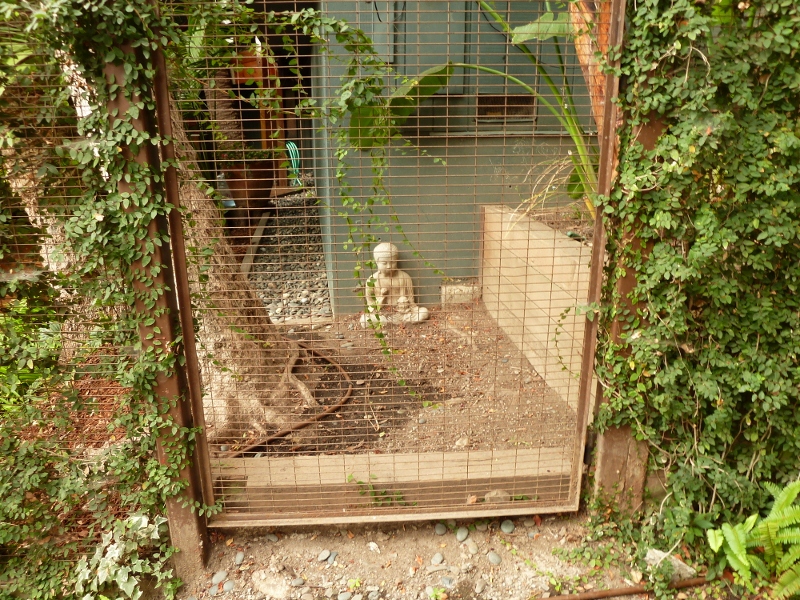 And saw this while going up the stairs. 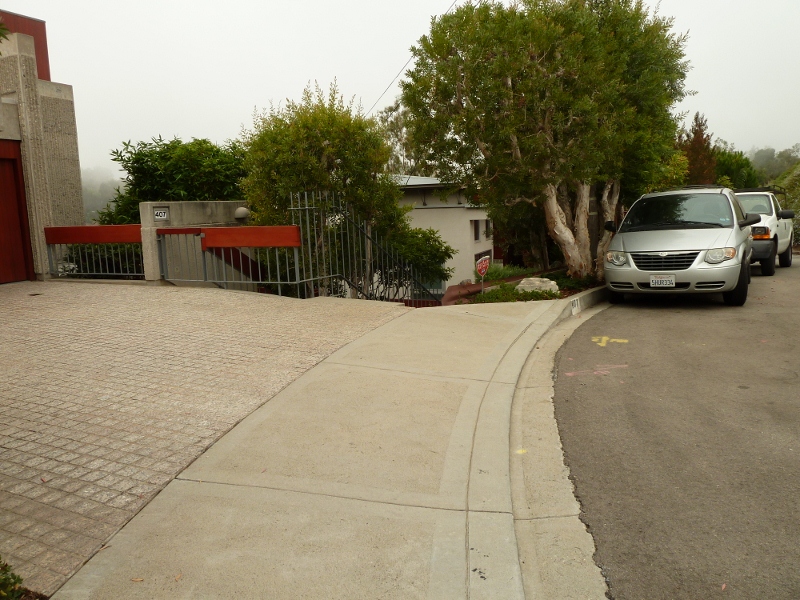 And here’s another set of stairs that you might have to look twice before you find them. Look over by the far edge of the driveway. 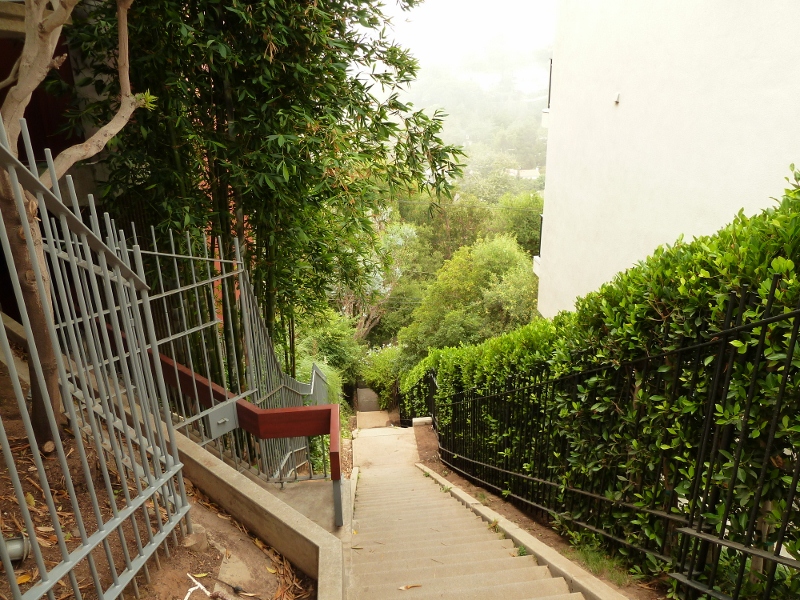 When you do find the them, you will be rewarded with this incredible walk. 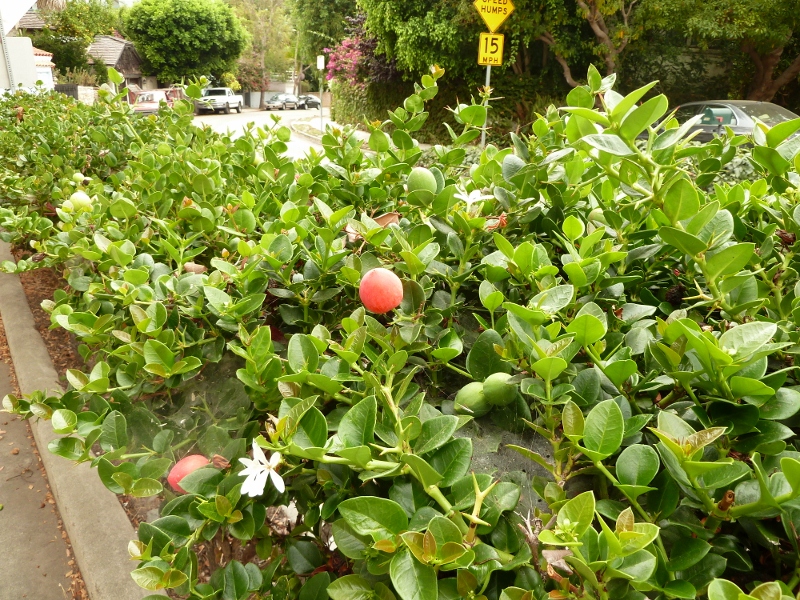 A typical hedge along the way. Does anyone know if this fruit is edible? 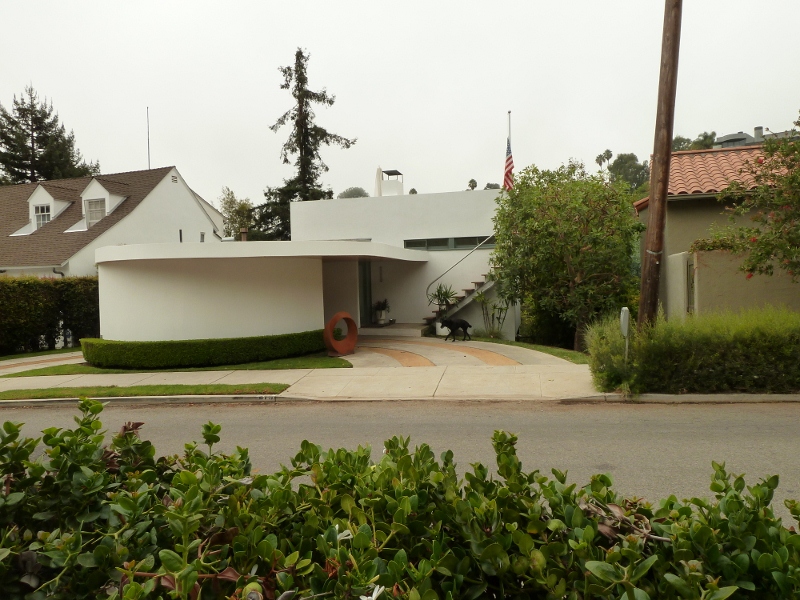 You’ll soon pass this famous house. It’s the Entenza House. It was built for John Entenza by Harwell Harris in 1937. Wouldn’t it be fun to see what it looks like on the inside? That would be worth a post all by itself. 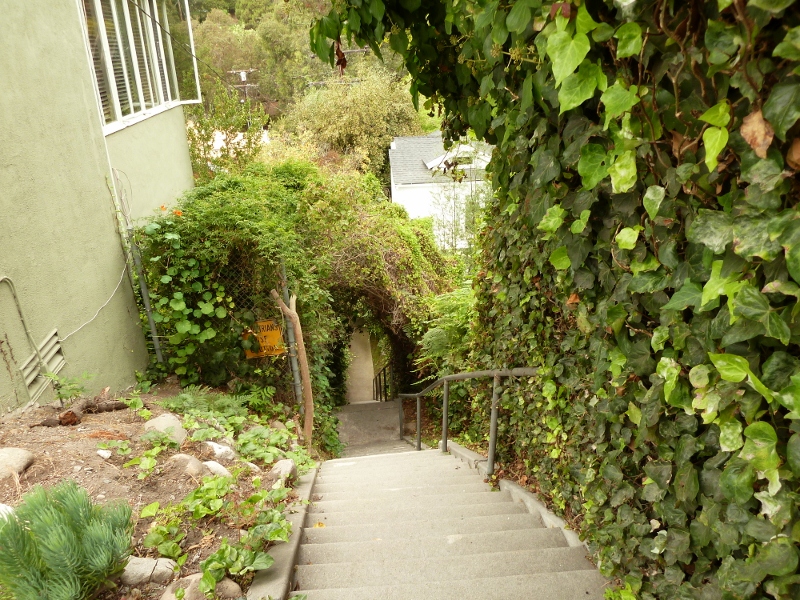 Don’t worry there are still more stairs to find. 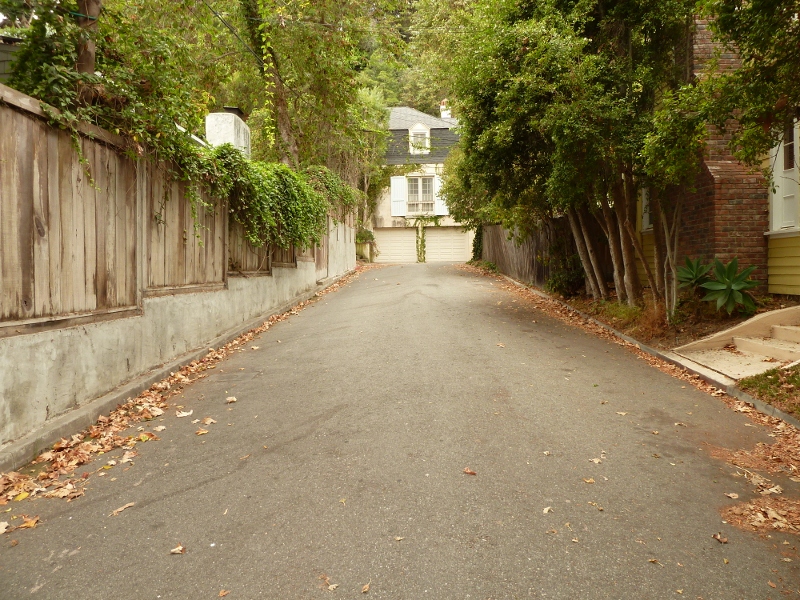 if you go to the end of this street, you’ll find another set of stairs. The best part of wandering is checking out potential dead ends to see if there is a way for you to continue on foot. 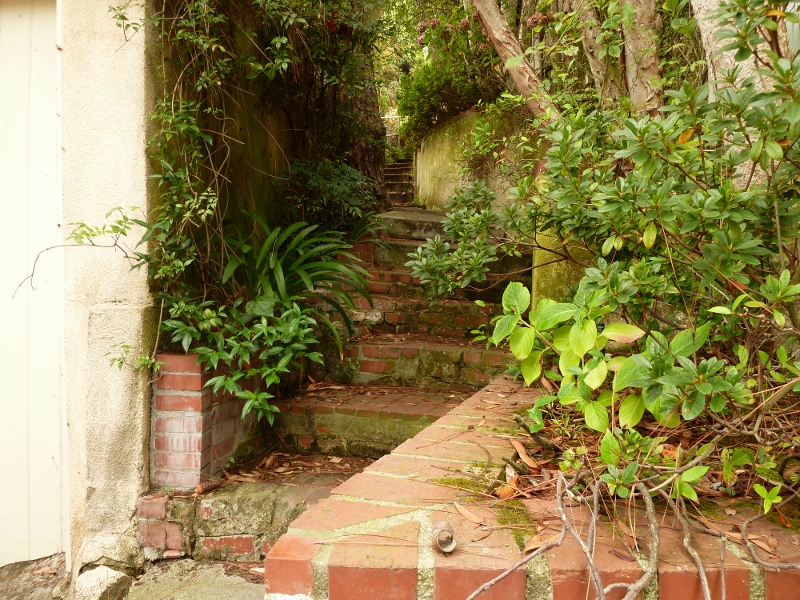 And these are the stairs you’ll find. 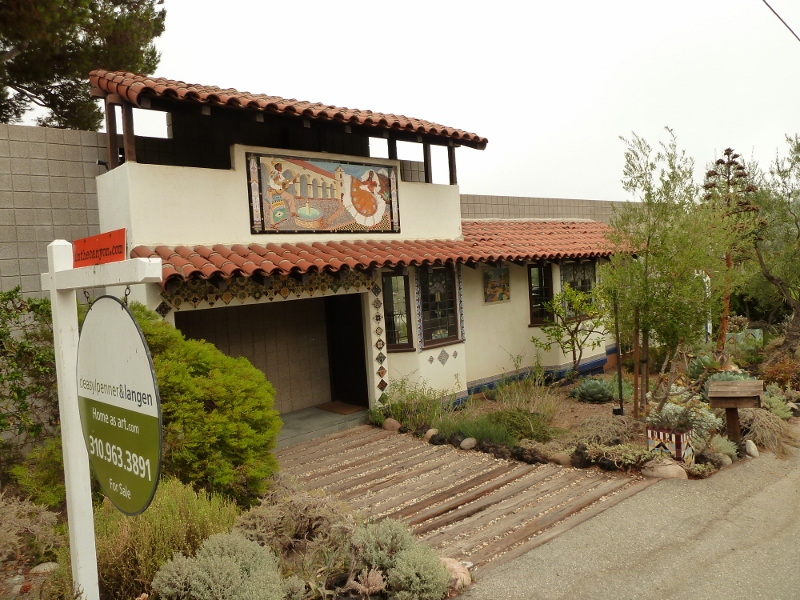 And at the top of the stairs you’ll find this house with its amazing murals. 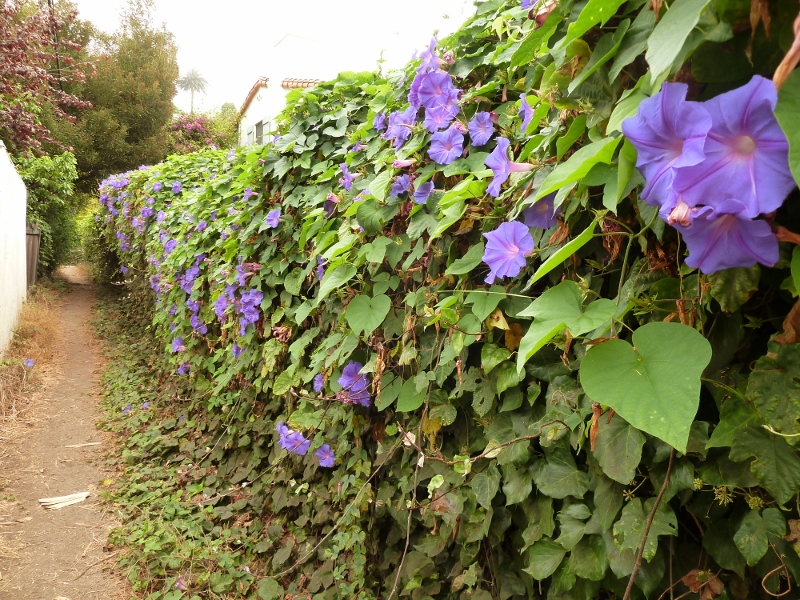 And here’s another pedestrian only passageway that Bob will include in the next edition of the guide. 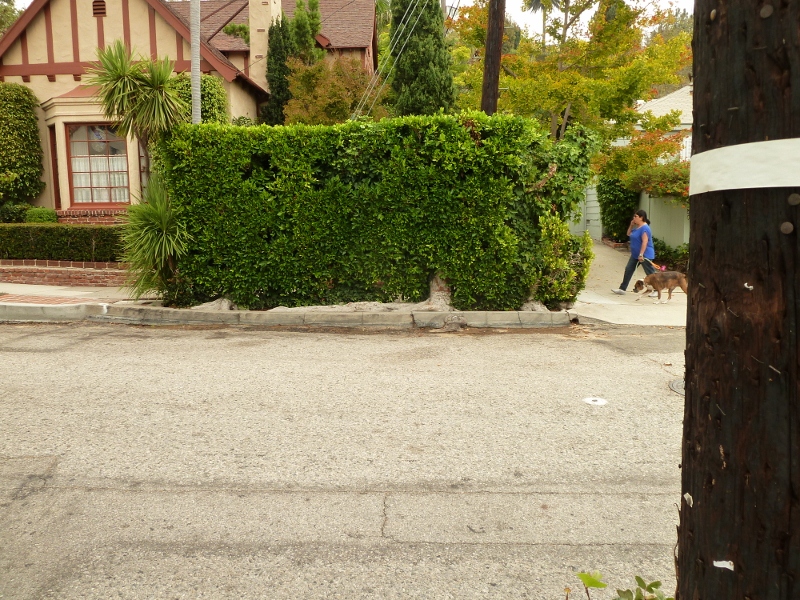 What do you think might be hiding behind this hedge?

Give yourself a pat on the back if you guessed another stairway. Thank you Bob for taking me on such an interesting walk. So much packed into a relatively small amount of space.

We eventually made it back to Santa Monica where we started. After grabbing a quick bite to eat, we then headed to Venice to check out some walk streets. I’ll describe them in the next post.