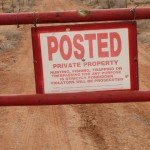 Continuing with the discussion started in Leaving the Pavement and Dirt Roads, your next consideration is who owns the land and if you can access it. Some backcountry areas in New Mexico are a checkerboard of public, private, and tribal land, and it is often difficult to know where one ownership ends and the next one begins.

As long as you are not breaking the law and adhere to any local restrictions, you are free to enter public lands. National Parks have more restrictions than National Forests, and the Bureau of Land Management has the fewest restrictions of all. If you are going to spend time on public land, it is worthwhile to find out what you can or cannot do in your local area.

For instance, some areas may be closed for fire restrictions, to protect habitat, or for another reason. Some areas may allow woodcutting, while others are closed to woodcutting. An area with fossils or petrified wood may have restrictions or prohibitions on collecting. Make sure you know what is allowed before you take something home. In all cases it is against the law to disturb an archaeological site or to collect archaeological artifacts. Your best bet in all cases is to have good manners and leave everything the way you found it.

Also remember that you do not have exclusive use of the land. Ranchers pay fees to graze their cattle on public land and their cattle have every right to be there. There is plenty of room for you and the cattle. Just leave them alone. Miners and drillers also pay fees to operate on public land. Again there is room for the both of you. If you come across a mine or a drilling rig, leave them be.

A private property owner or Indian tribe has the right to deny you access to their land. It’s their land not yours. As mentioned before, it is sometimes hard to know where public land ends and private land begins. A fence line is not necessarily a property line and it is not necessarily the end of where you can wander. The main purpose of fence is to control cattle. Unless it is posted with No Trespassing signs, it doesn’t have to stop you. (If you’ll be wandering in the backcountry, you will be going under, over or through barb wire fences. So it is not a bad idea to make sure your tetanus shot is current.) 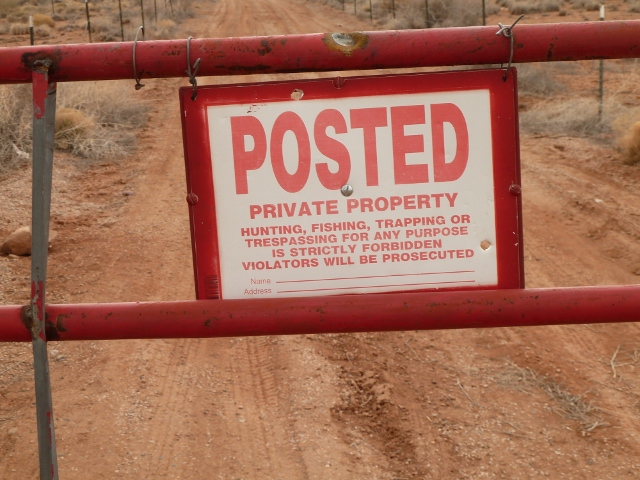 If a fence is posted with No Trespassing signs, pay attention; you risk breaking the law by crossing onto posted land. It’s best to move on as there are plenty of other places to wander. When you do park your car, it is best to park on public land. This will minimize any issues regarding access.

Not all private land is posted with No Trespassing signs, and it is possible to cross private land without knowing it. Even if you have a map that identifies land ownership, you can still find yourself on private land by accident. You may have read the map incorrectly, or the land ownership has changed since the map was published. Ownership can change when a public land agency swaps an isolated parcel of land with a nearby land owner to make a more manageable parcel of land. Land is also swapped to facilitate new development. In some cases the ownership can be so convoluted that no one knows for sure where the lines are.

All of this means that you might accidently find yourself on private land, and if you haven’t done anything to disturb the land or to bother the livestock, you really haven’t done anything wrong. If a land owner tells you that you are on their land, be honest with them. Tell them what you are doing, where you’re from, and where you’ve parked. Being honest and friendly will go a long way in your backcountry wandering.

I personally have never had an unpleasant conversation with a landowner. I may have been asked to leave, but it has never been with belligerence. More often than not the owner will show me the boundary line and let me stay as long as I am not hunting. I’ve even had land owners allow me to drive on their land to get closer to my destination.

There are some cases where it is common practice, and is allowed by the owner, to cross private land. As an example, some people in mountainous states have made it their goal to hike to every county highpoint within the state. Some highpoints are on private land. In that case, but not all, the owner may allow hikers to cross their land to reach the highpoint. I have even seen cases where the owner has left a register for you to sign. But before going to a highpoint or someplace else on private land, do your research to make sure that it is allowed.