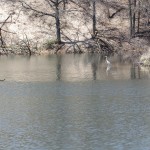 One of the major themes of The Gentle Art of Wandering is that you can wander anywhere. In urban and industrial areas there are plenty of creases and corridors where nature thrives. They are perfect places for wandering.

The book includes a description of a corridor on an old Indiana Harbor Belt Railroad right-of-way near the Indiana Dunes National Lakeshore just outside of Chicago. When Petey and I went to the Mississippi River area in April to visit public stairway communities we also paid a visit to the old rail corridor.

We parked near the Paul H. Douglas Environmental Education Center at the Indiana Dunes National Lakeshore. (Paul Douglas was the Senator from Illinois who was instrumental in protecting the Dunes in the early 1960s.) From there we were soon walking along the rail corridor. 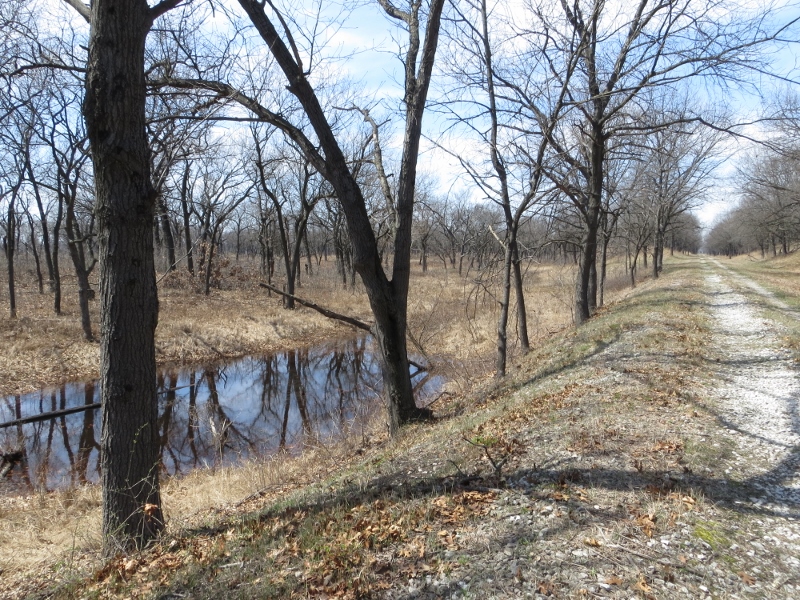 The corridor passes through dunes, wetlands, and an oak savannah. The railroad was built to service steel mills in the area. 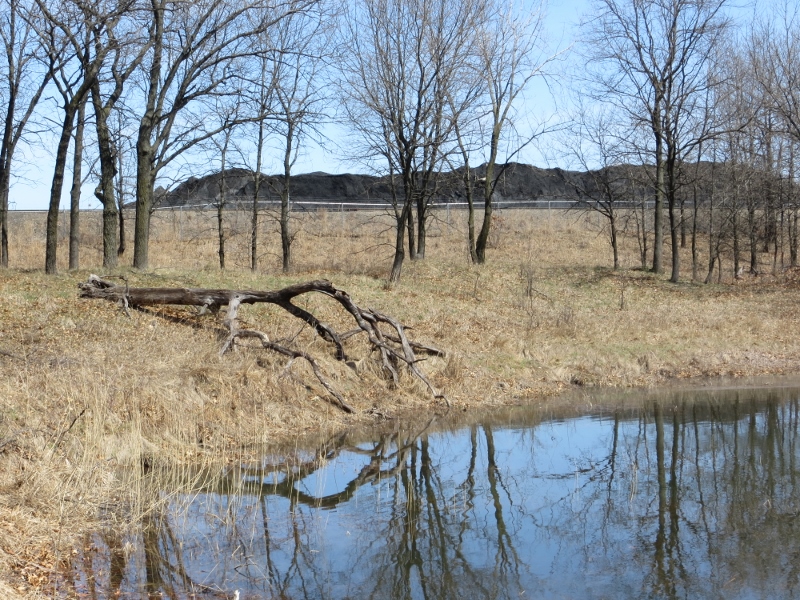 As we got closer to one of the steel mills we could see piles of slag. Slag is a byproduct of the steel making process. It can be sold as an aggregate for construction or paving; much like gravel. 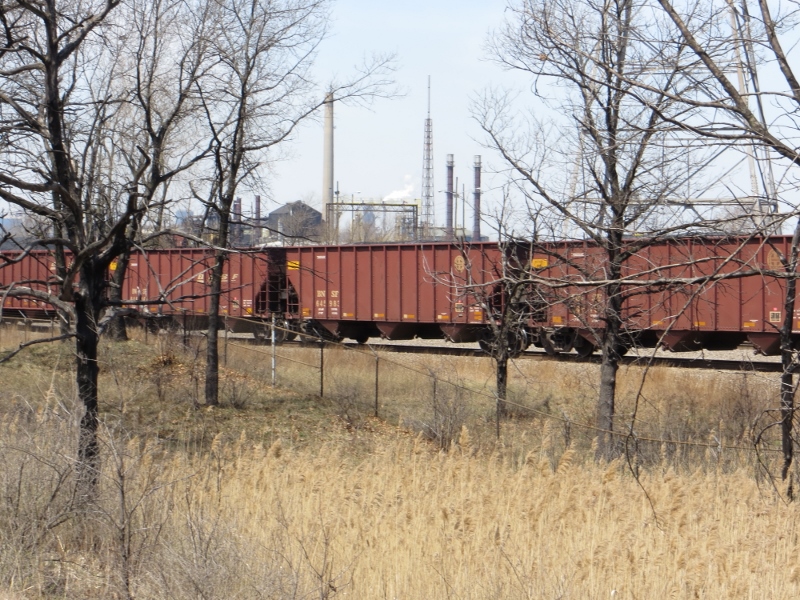 The corridor eventually took us to the heart of the steel mill. We could even see the flames of the blast furnace shooting up into the sky. The rail cars in front of us are delivering coal to the steel mill. 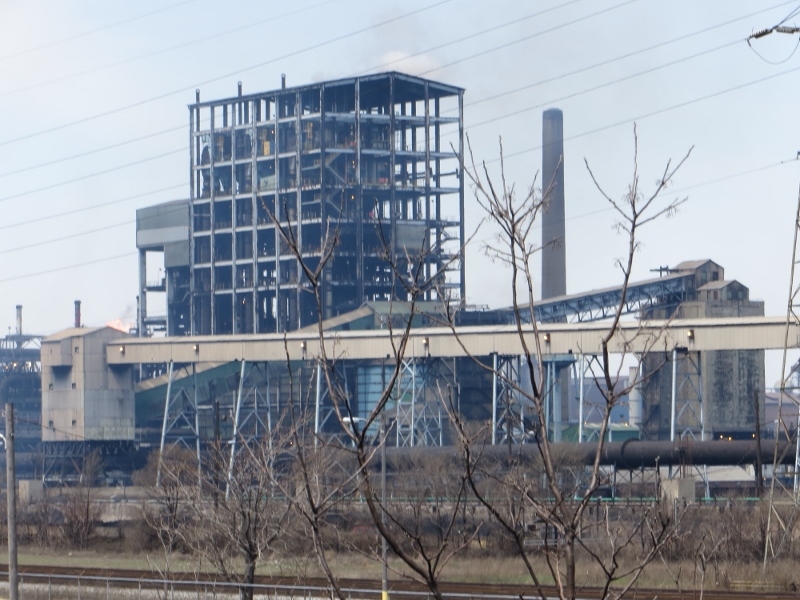 If you look closely, you can see the flames towards the left. 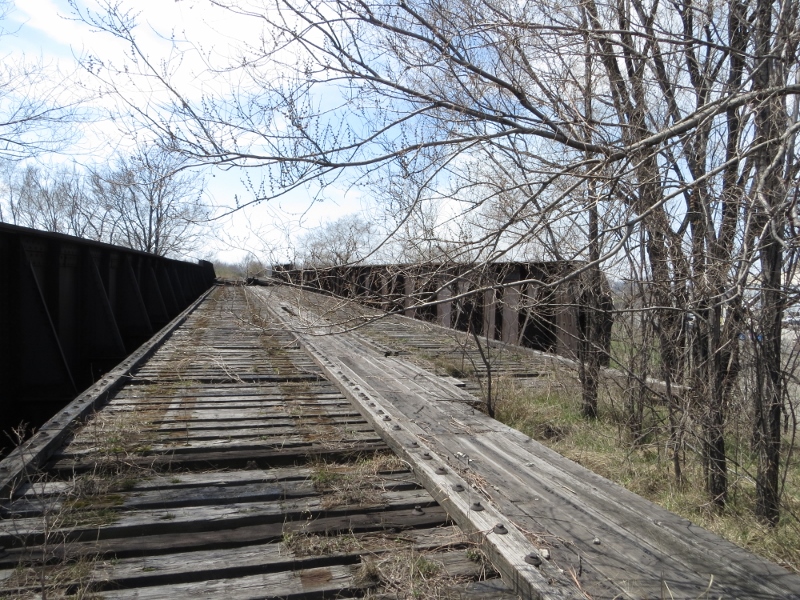 We eventually reached the end of the line. The other side of bridge is owned by the steel mill. On the day we were hiking, a crew on the other side was dismantling their end of the bridge. It was time to turn around and pay more attention to the dunes and wetlands. 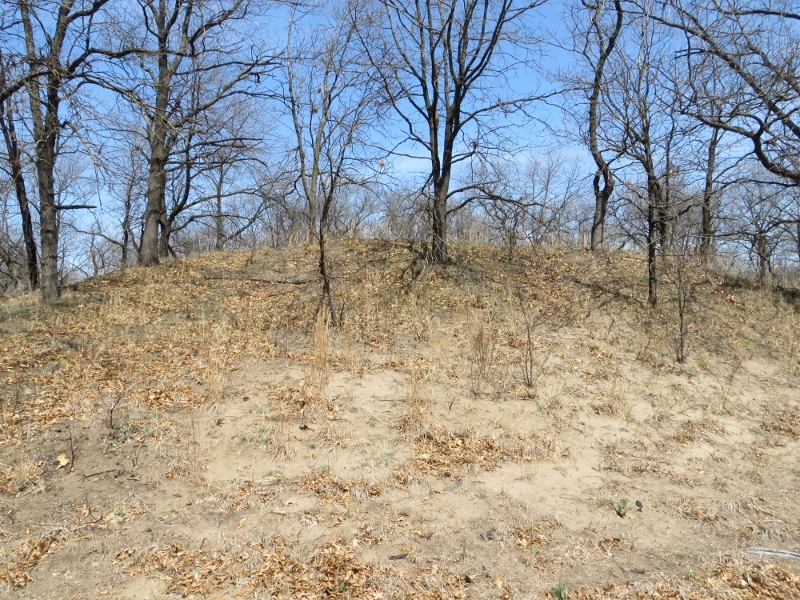 The hills along the side of the corridor are all sand dunes. 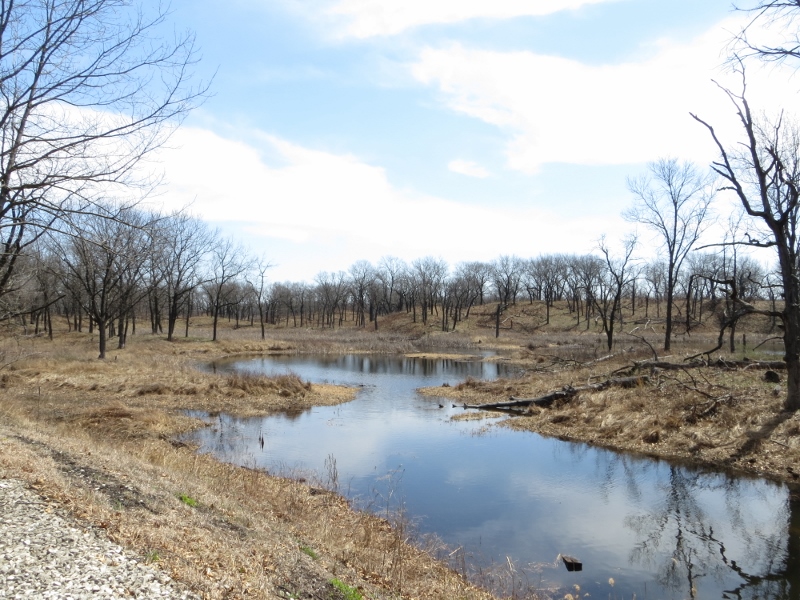 The wetlands in the pockets between the dunes are teeming with life. 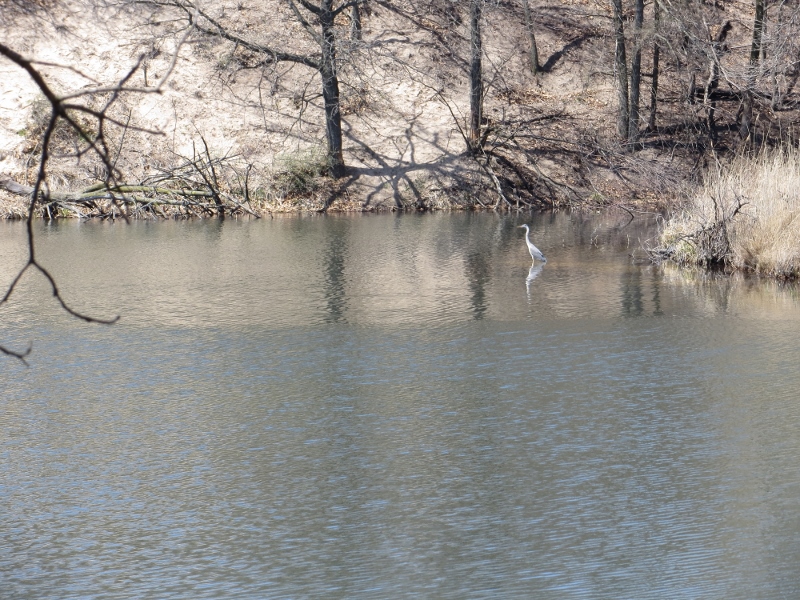 Including this bird patiently waiting for a snack. On our walk we saw plenty of deer, several varieties of birds, and even an early season ribbon snake. When we got closer to the water we saw plenty of fish. If we were to come back in a few weeks the ponds would be alive with turtles. Many of the ponds had beaver and muskrat lodges. Throughout the woods you can see where beavers have chewed on the small saplings. 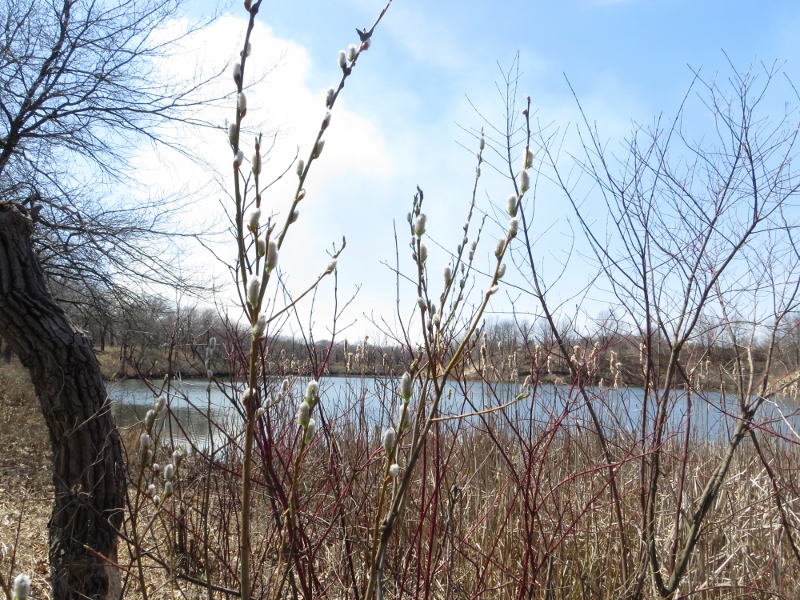 The pussy willows were out when we came through in early spring. 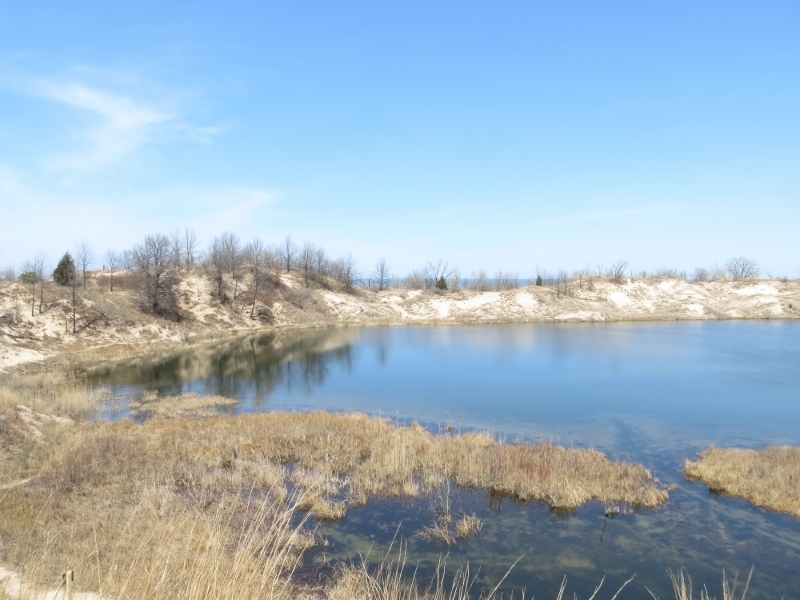 That’s Lake Michigan in the background. 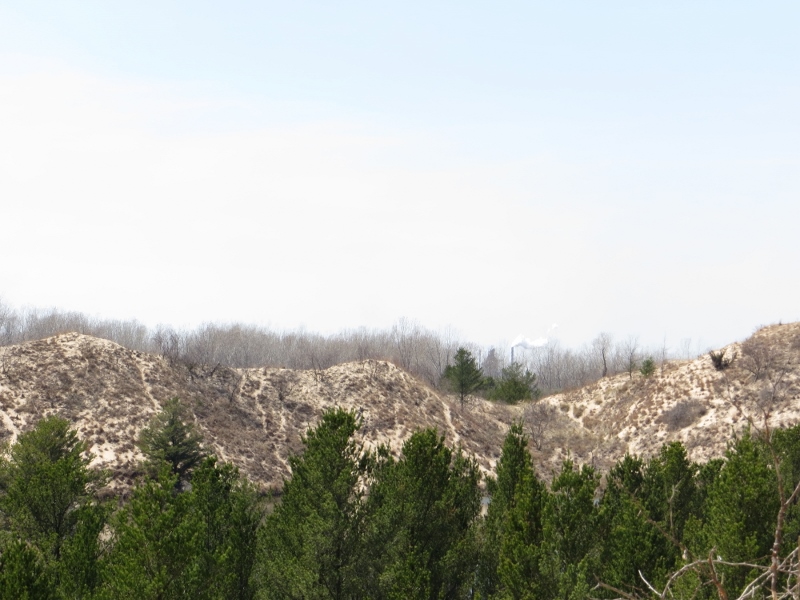 Some of the newer dunes closer to Lake Michigan had pine trees. The older dunes further away from Lake Michigan were all oak savannah. The nature of plant succession was first documented at the Indiana Dunes by Henry Cowles over one hundred years ago. 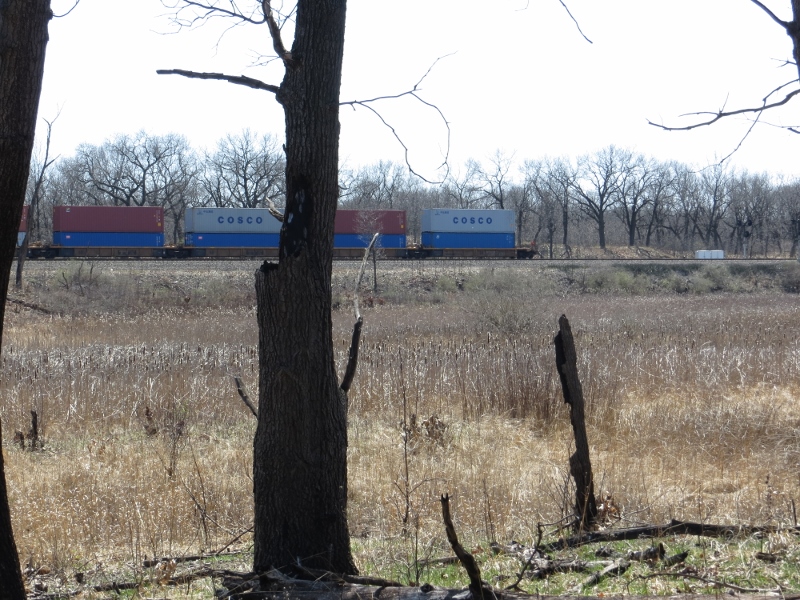 Not too far from the old rail corridor is a live rail line pulling containers across the country. As you can see this area is clearly an oak savannah.

I hope this blog illustrates that you can find an interesting walk no matter where you are. And when you allow yourself to see all that is around you, you can even wander next to a steel mill. Maybe nature and getting away are closer than you think.