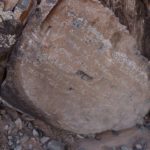 Hidden Mountain, the home of the world famous “mystery stone,” is a basalt covered uplift about 35 miles southwest of Albuquerque in the high desert grasslands west of Los Lunas, New Mexico. It is not very well hidden as it is readily visible from NM Highway 6 and is less than a mile from one of the busiest trans-continental rail lines (BNSF) in the country. Hiking at Hidden Mountain is featured in the 3rd edition of 60 Hikes within 60 Miles: Albuquerque (Hike 53). (More information on the 60 Hikes book is under the “60 Hikes” tab of this website.) 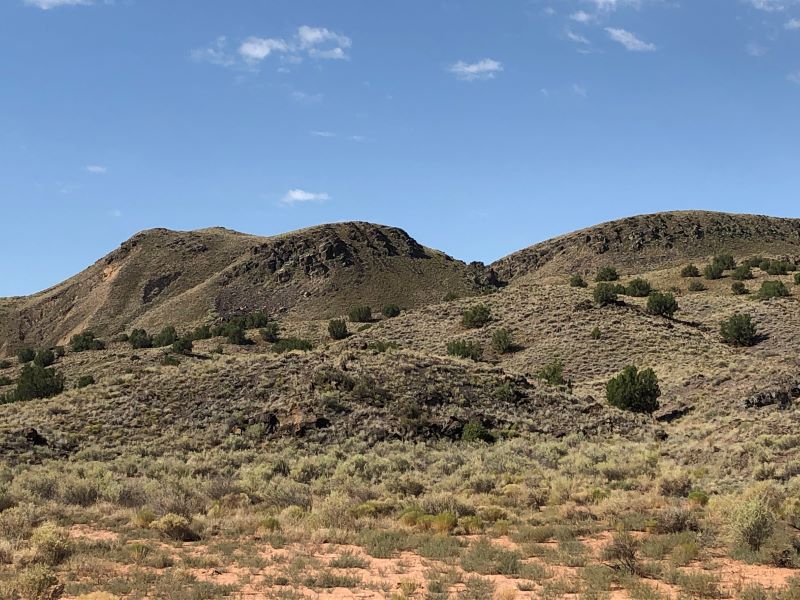 The world famous “mystery stone” is a nine-row inscription of ancient lettering carved into the face of a large basalt boulder near the base of the mountain. If you query Hidden Mountain, or Los Lunas Mystery Stone, or Decalogue Stone on the Internet you’ll find an amazing array of articles and YouTube videos with fantastic explanations on the meaning of the inscription. 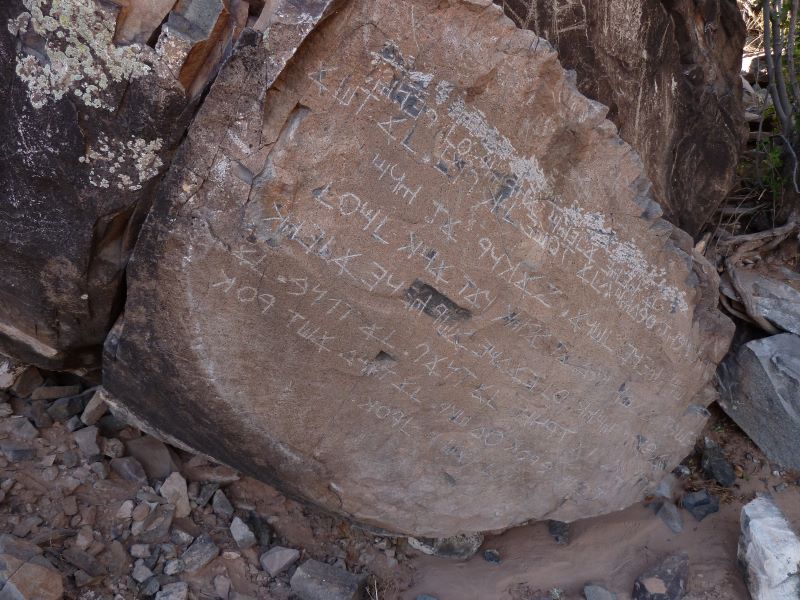 You’ll learn about the Lost Tribes of Israel, the Greeks, or the Phoenicians who somehow found themselves in New Mexico over 2000 years ago and then took the time to inscribe their story on a large boulder at the base of Hidden Mountain. Other sources will tell you that the inscription is an early version of the Ten Commandments. Some sources go so far as to interpret a cluster of petroglyphs at top of the mountain as a description of the night sky and an accompanying eclipse that happened more than 2700 years ago to date the inscription. There are even some who describe the ruins on top of Hidden Mountain as the homes of the people who carved the inscription.

My opinion is that the inscription is a well-executed and elaborate prank and that any attempt to decipher the inscription is a waste of time. But because “hidden history” and “what they didn’t teach you in school” or “unsolved mystery” stories are so much fun and feel so good to embrace, there is no way that I am going to dissuade anyone who believes that the stone is actual evidence of ancient visitors from across the sea.

The first thing to consider about the “mystery stone” is that it was not revealed to the world until 1936 by University of New Mexico archaeologist Frank Hibben. He was in the area at that time because of the extensive archaeological work he was doing at nearby Pottery Mound.

I have read a 1926 paper describing both Pottery Mound and Fortification Mesa, and it does not mention a stone with a mysterious inscription. Adolph Bandelier, who investigated the ruins at Hidden Mountain in the late 19th century, also did not describe an unusual stone. (Bandelier National Monument is named after him.)

When I moved to Albuquerque over 20 years ago, my wife, Claudia, and I had the opportunity to take several archaeology classes from Frank Hibben. He had long retired as a professor but was still teaching a continuing education class every semester. Hibben’s depth of knowledge and ability to engage a class was amazing, and every class ended with all of the students giving him a rousing applause. But he did seem to have a taste for the fabulous, and it is possible that he may have overstated the “mystery” surrounding the inscribed stone at Hidden Mountain.

I highly doubt that Frank Hibben perpetrated a hoax, but I do believe that some of his students may have played a prank on him. They would have had access to dictionaries of ancient languages at the university library to concoct the text for the inscription.

The next thing consider, when determining if the inscription is the real deal or not, is to look at it. The inscription does not look extraordinarily old. Because the stone has been scrubbed and rescrubbed many times, there is no way to date it. But if you look at the inscription incisions, they still look sharp. They have not been severely weathered. If you compare the “mystery stone” to a nearby Native-American petroglyph (and there are plenty to find at Hidden Mountain), you’ll see that they show signs of weathering. In all fairness, Native-Americans used stones to peck their images while the “mystery stone” was inscribed with a chisel. 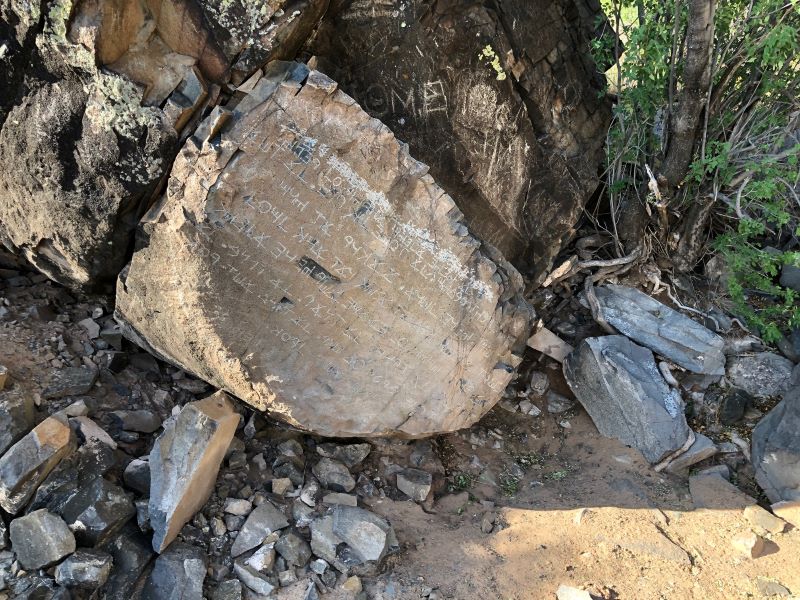 Here’s another look at the Mystery Stone. 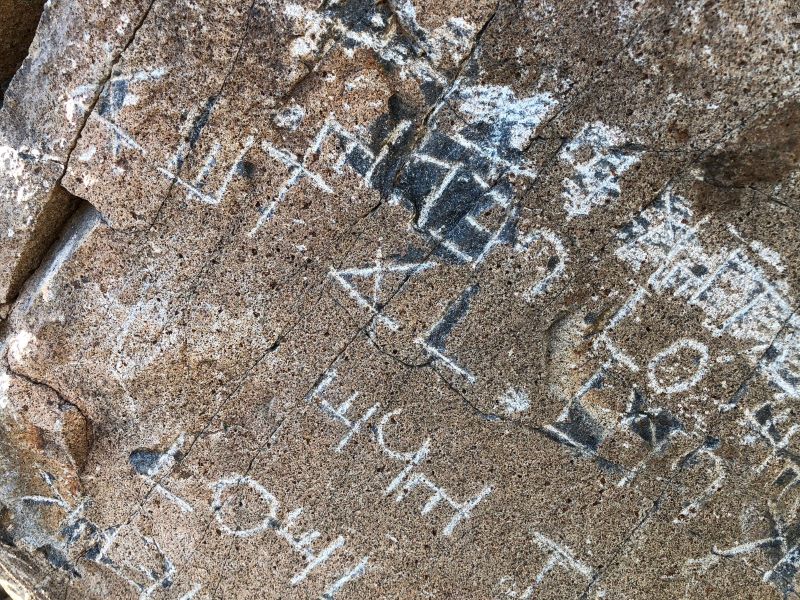 And here’s a closer look at the inscriptions.

There are at least two clues as to the possible perpetrators. Just few feet in front of the ”mystery stone,” inscribed into the basalt surface below your feet, are the names of “Hobe” and “Eva” with a date of “3-9-30.”  You were probably standing on their names when you took a picture of the “mystery stone.” 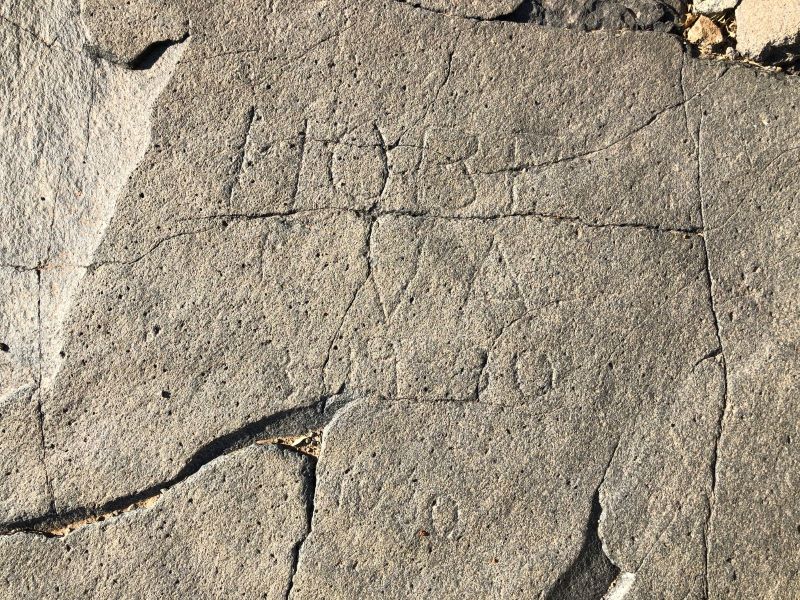 Look closely and you can make out Hobe and Eva. Who knows how many people have walked over this inscription.

If you continue up to the top of Hidden Mountain, you’ll run into another inscription that again features our friends Hobe and Eva. This time the inscription is on the rock face of a small canyon just before reaching the top. If you examine the inscription, you’ll see that it has the same style of chiseling as the “mystery stone!” 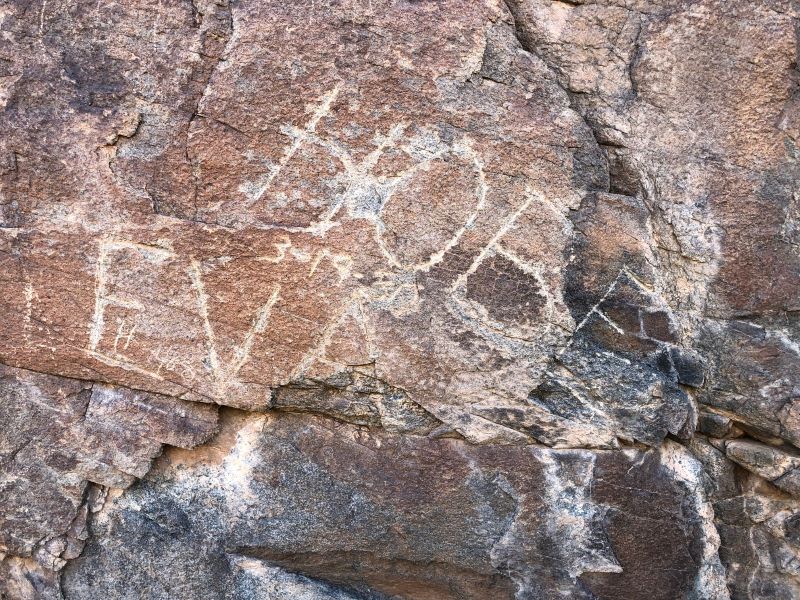 But, perhaps, the best reason to reject the mystery around the “mystery stone” is that the mysterious stories make no sense at all. Having hiked the 2180-mile Appalachian Trail in its entirety and 1000 miles of the Camino de Santiago in Europe, I have learned first-hand of the importance of logistics in supporting a long distance adventure. Readily available access to food, water, and safety is an absolute requirement!

It would have been a very serious endeavor for ancient visitors to make it all the way from the Gulf of Mexico to New Mexico. Did they walk? If so, where are the legends about strangers walking across their land? If the visitors had horses, why weren’t there horses in the Americas prior to the arrival of the Spanish? And if they came in big enough numbers to forage for food and to provide for their own security, where is the evidence of massive camp grounds along their route? And again, where are the legends of a hoard of ancient invaders?

But Hidden Mountain is not the only location in our country with a hard to believe “mysterious” story. In Manchester, Tennessee there is a Middle Woodland period Native-American ceremonial enclosure from 1500 years ago called Old Stone Fort. Although there is no doubt as to its being a Native-American archaeological site, the Tennessee State Historical Marker on U.S. Highway 41 tells a different story about Old Stone Fort. 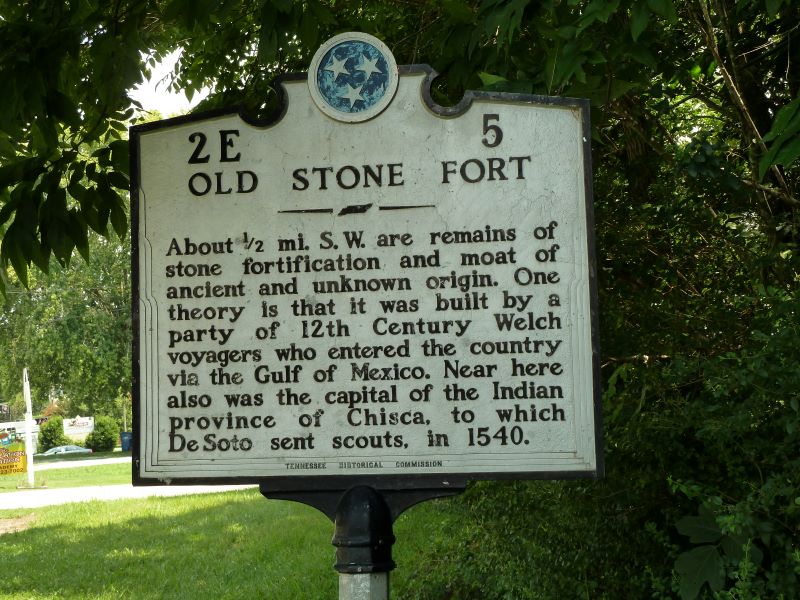 Whether you believe in the mystery or not, Hidden Mountain is a great place to explore. It’s on State Trust Land which requires a recreation access permit to visit. The State Land Office has recently made it very easy to purchase an annual permit online at https://www.nmstatelands.org/. The Land Office is also looking into other options, such as a Day Pass, to make its lands more accessible for outdoor recreation. 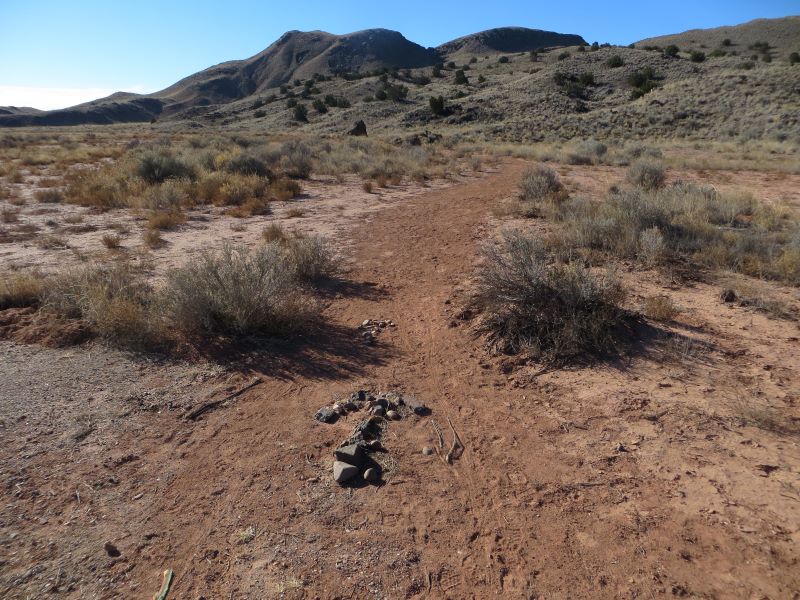 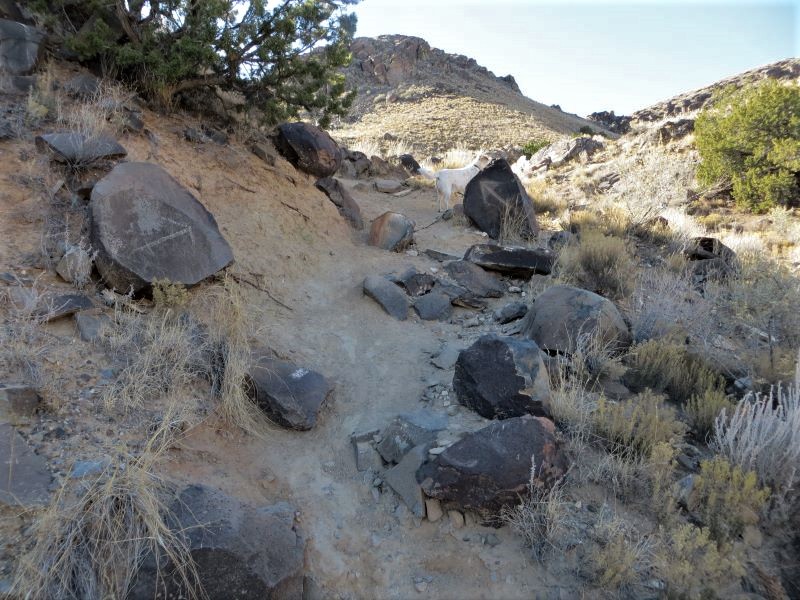 The “mystery stone” is around the bend

Obviously, you’ll want to check out the “mystery stone” when you do visit. And from there you can follow the trail up to the ruins at the top of the mountain. But before heading up, you might want to look around at some of the Native-American petroglyphs near the “mystery stone.” There’s a very interesting one of an animal (probably a mountain lion) with a very long tail. 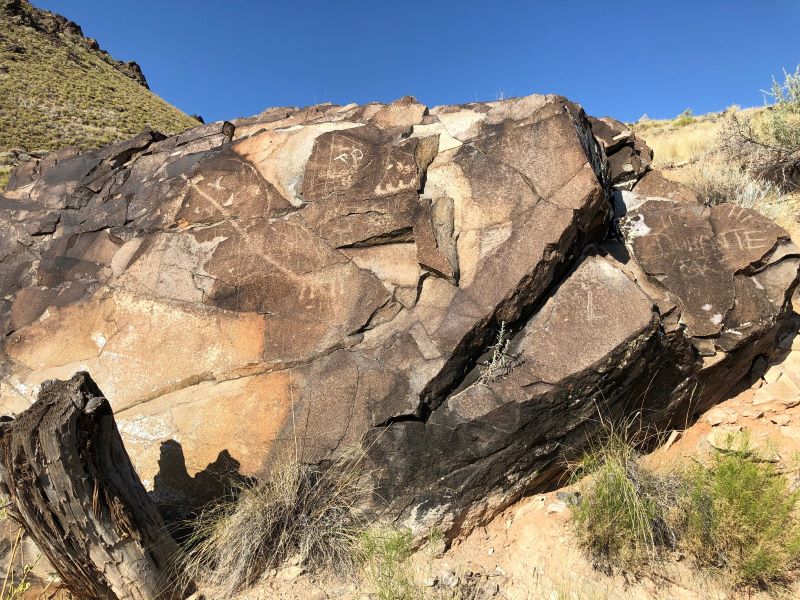 Check out that tail!

The trail to the top can get a bit rugged in some places, so you might want to pay attention to your footing on the way up and down. Once on top, you can wander around to check out the ruins and look for petroglyphs. Also while on top you can take advantage of the unobstructed 360 degree views. If you’re a rail buff you can watch the trains pass by on the BNSF tracks to north. 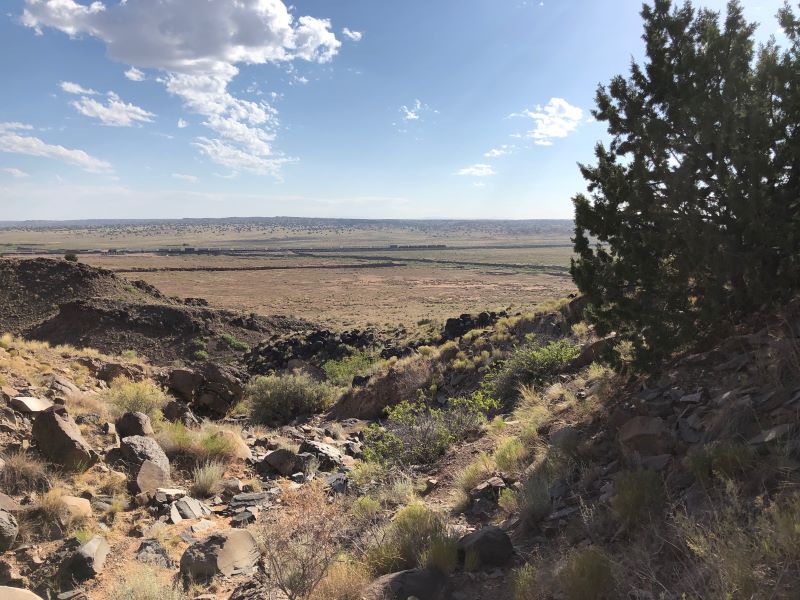 The trail to the top follows this drainage 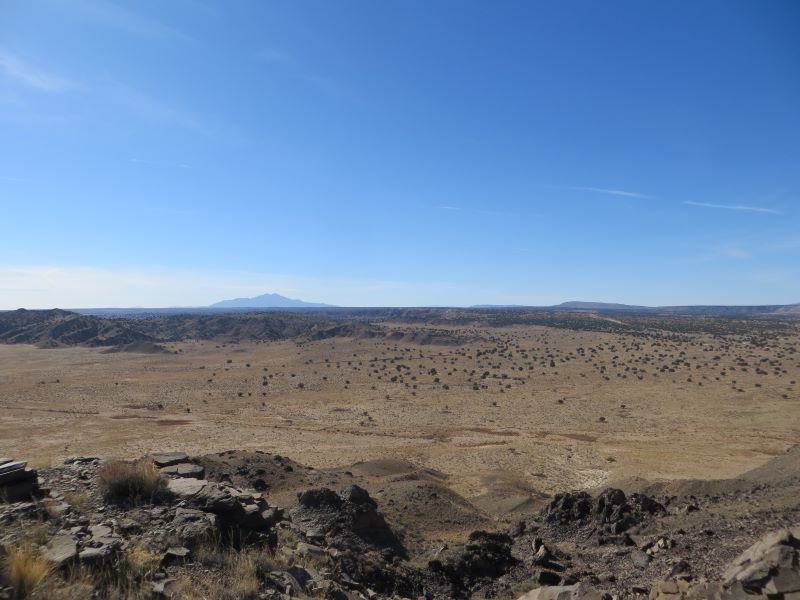 360 degree views are there to greet you when you reach the top. Those are the Ladrones to the south. 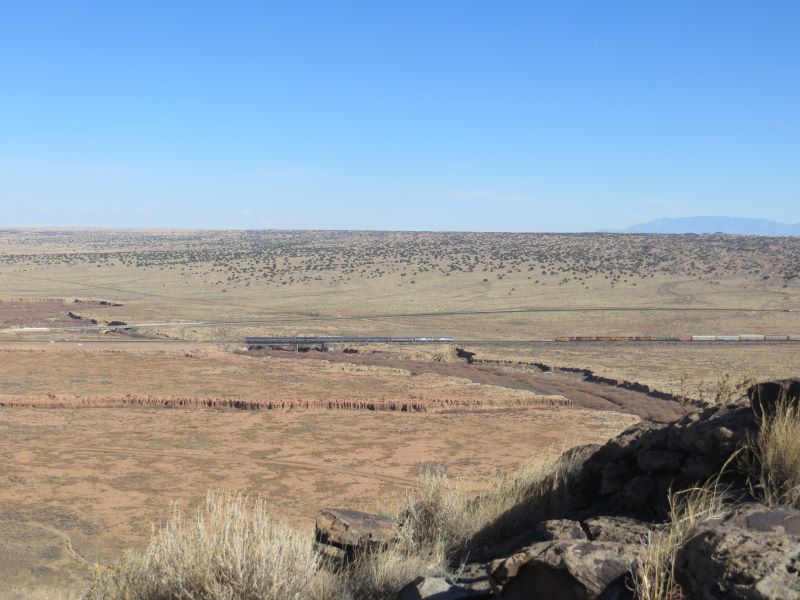 And to the north you can watch trains pass by! 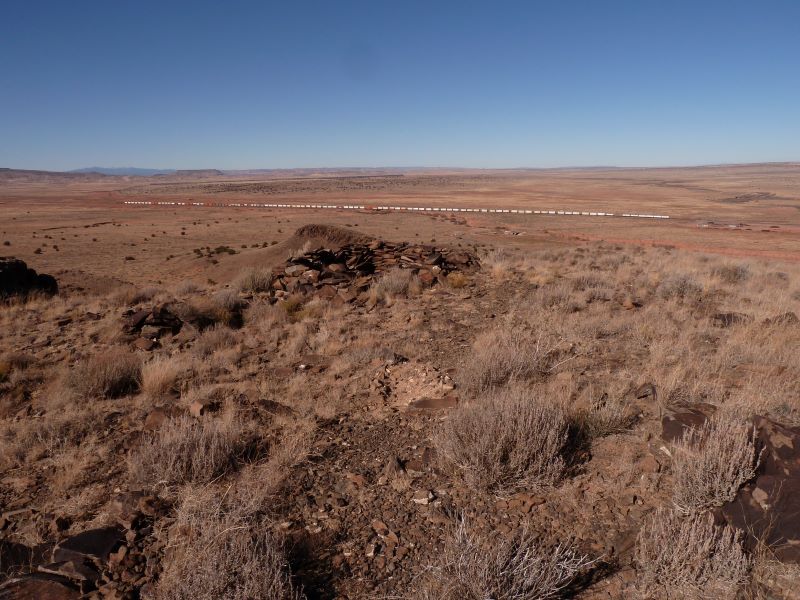 And you’ll find plenty of rock walls (ruins) all over the top of the mountain. 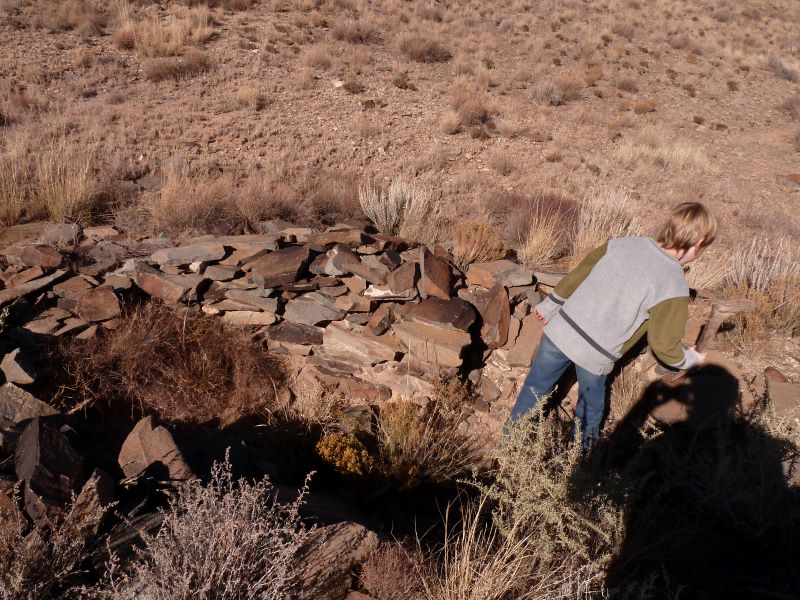 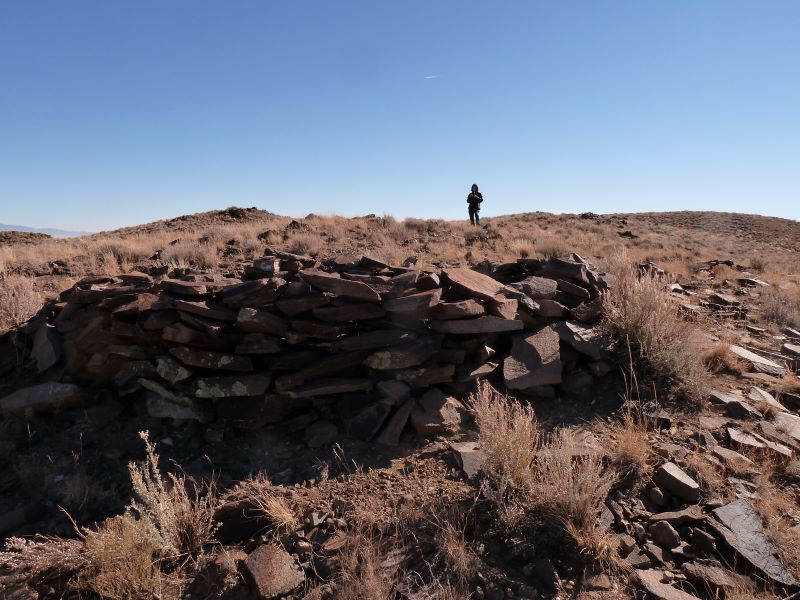 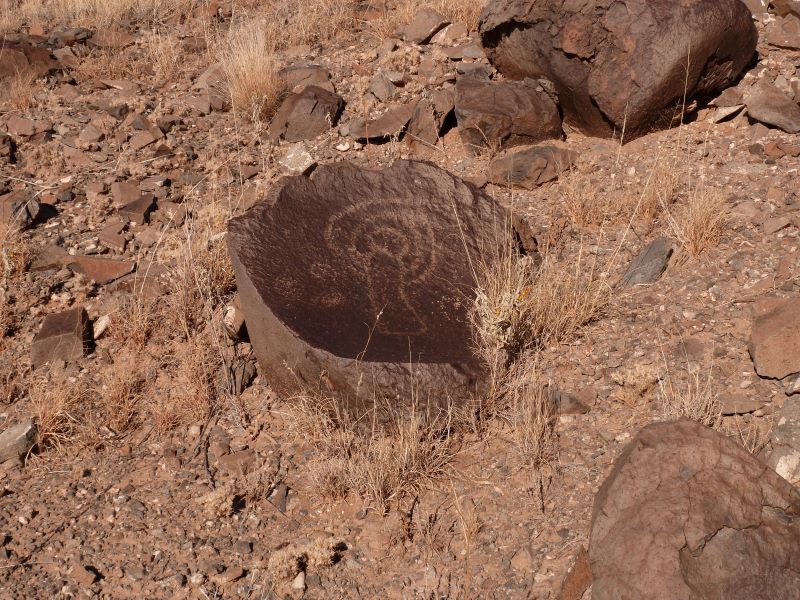 And keep an out for petroglyphs, they’re all over the place! 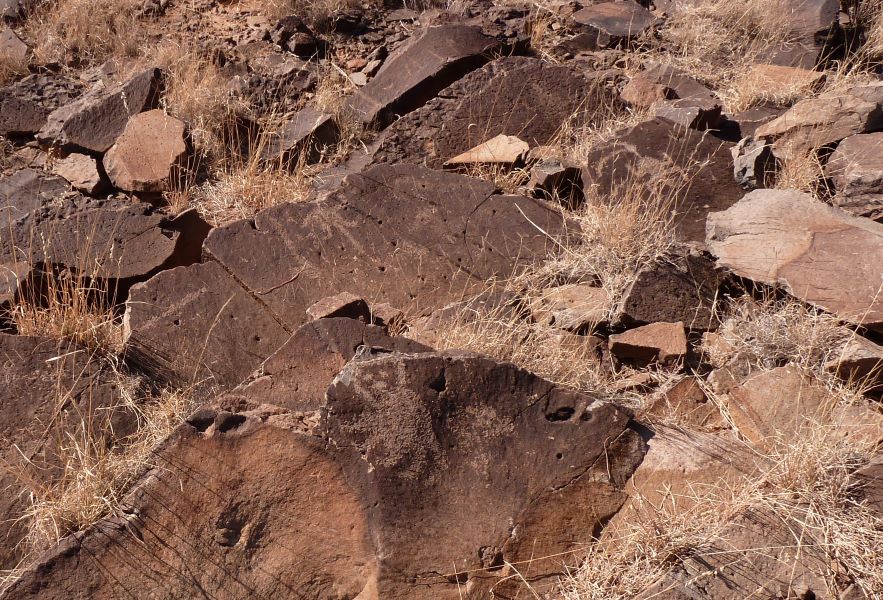 The ruins are quite interesting because archaeologists found very few artifacts when they studied the ruins. This would indicate that the top was only occupied occasionally. The few artifacts that were found date the ruins to around 700 years ago. This would make them contemporaneous with nearby Pottery Mound. The top of Hidden Mountain may have been a refuge for Pottery Mound during times of trouble. The ruins were clearly NOT built and occupied by ancient visitors. 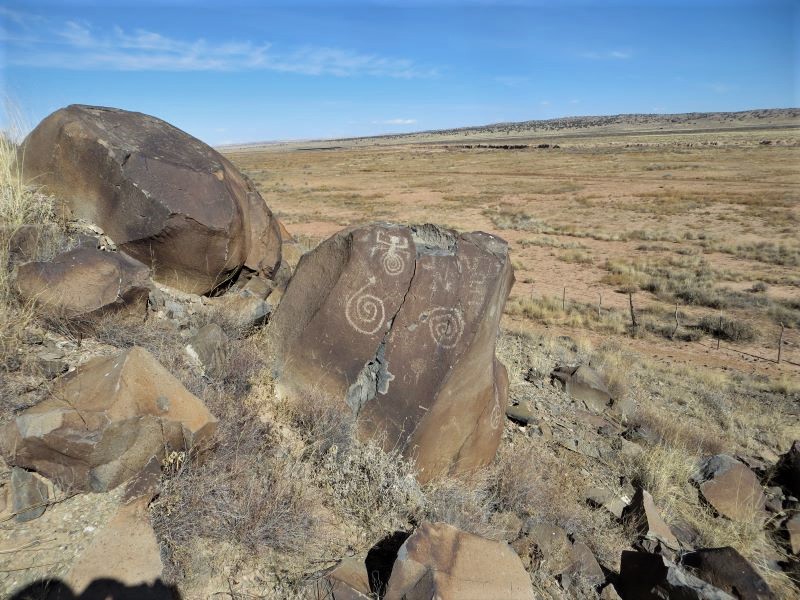 These are just a few of the petroglyphs you can find at the base of the mountain.

With that your adventure at Hidden Mountain will be over and it will be time go home.