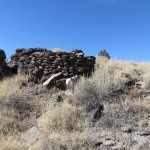 A couple of days ago the dogs and I went wandering in a very quiet area of the New Mexico backcountry. When we pulled off the dirt road and got out of the car, the air was still; the sky was clear; there wasn’t even a contrail. It was absolutely silent. 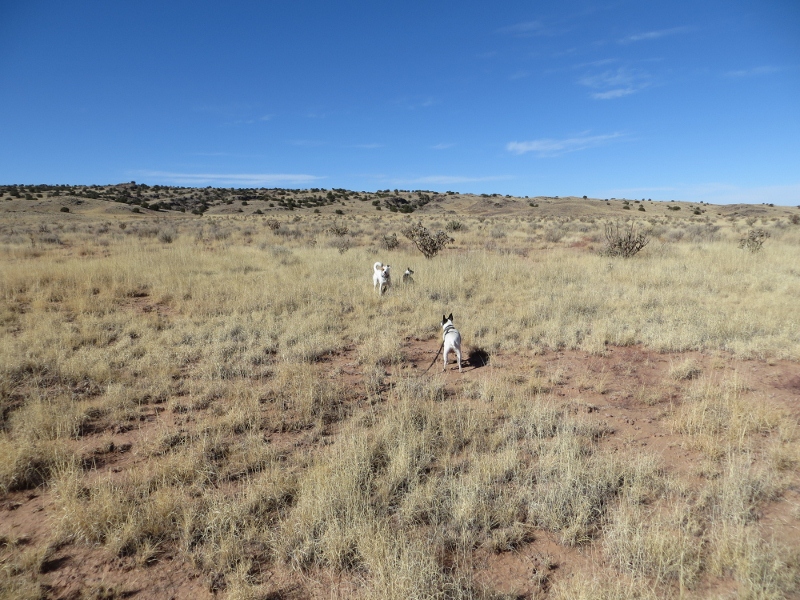 I was starting to think that maybe I had found a place where there is no noise. But before I could strut too much, hubris brought me back to earth as an airplane flew high overhead. Except for the faint sounds of an occasional airplane, the only sounds we heard on our walk were our steps and our breathing.

A walk in a silent place is an amazing experience. You’ll find yourself actually listening to the silence. It will even heighten your awareness of everything else that is around. You’ll soon be able to hear the flapping wings of a bird flying overhead. 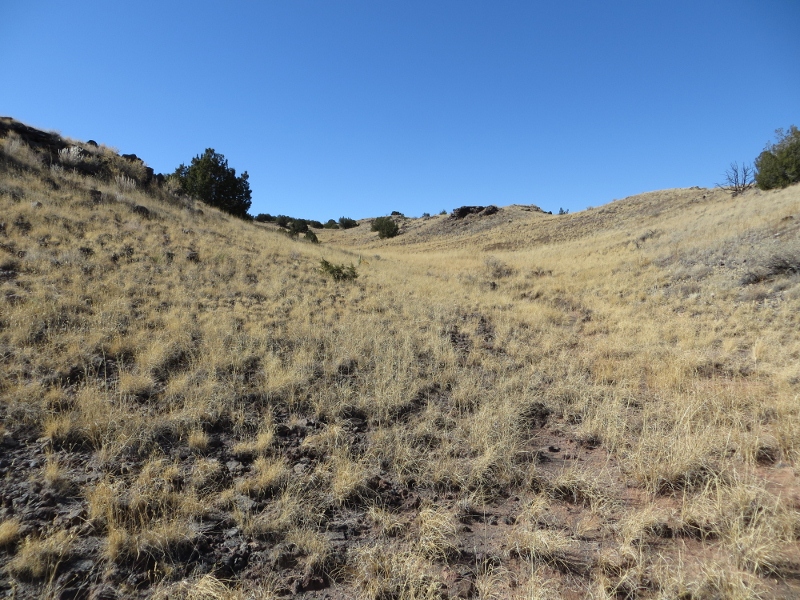 As we walked, we followed the natural curve of the land as it led us to the top of a broad mesa. Just at the brow of the mesa we noticed an unusual structure. It was a small stacked stone wall adjacent to a rock outcrop. It was obviously old, perhaps a thousand years old. At that time a valley about a day’s walk to the south had a significant population. This could have been an accessible hunting ground for them. 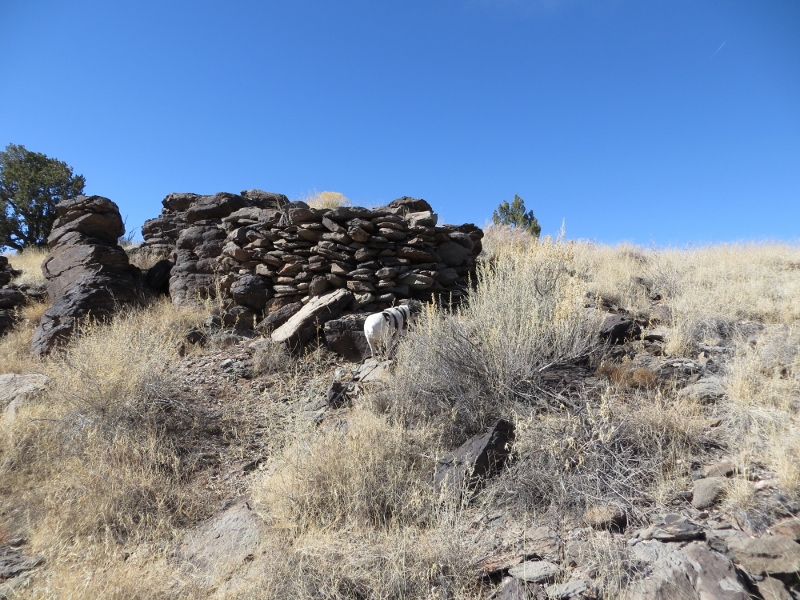 The structure looked like it never had a roof. With a distance between the wall and the outcrop being at the most two feet, it would have been a struggle for more than two people to sit in it. It’s most likely use was as a hunting blind. 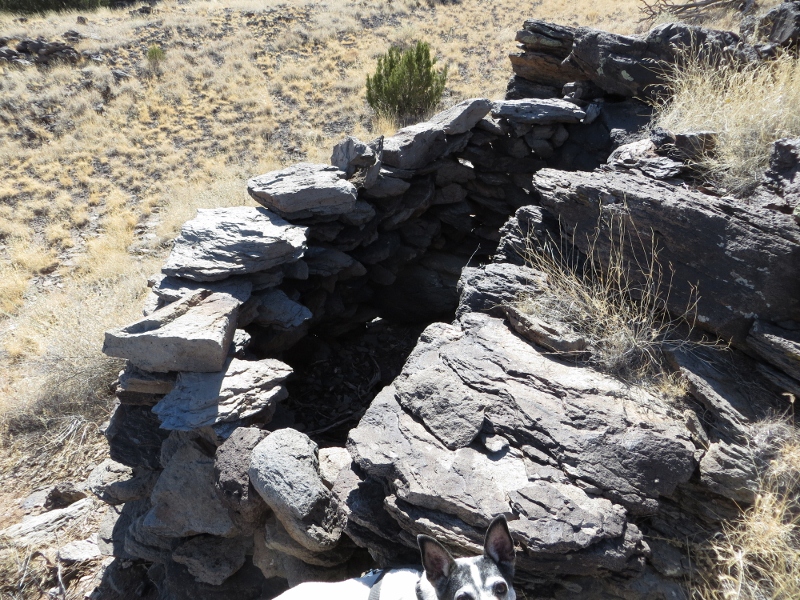 And what a perfect place for a hunting blind! Being tied into a rock outcrop, it would be easy to miss. Being located at the brow of mesa, it would not stand out.

The architect Frank Lloyd Wright placed his houses on the brow of the hill rather than on the top because he wanted his houses to appear “not on the land, but of the land.” And if you want to surprise an animal, you want to be of the land and not on top where you can be seen.

In addition to being on the brow, the hunting blind was at a narrow point of a natural funnel that led animals from the bottom lands to a broad pasture on top. If you were a hunter, this is where you would want to be. 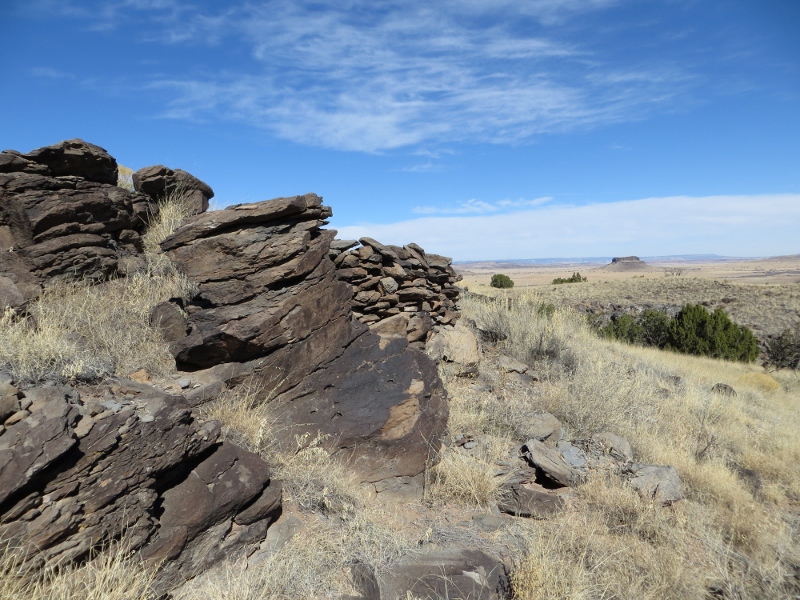 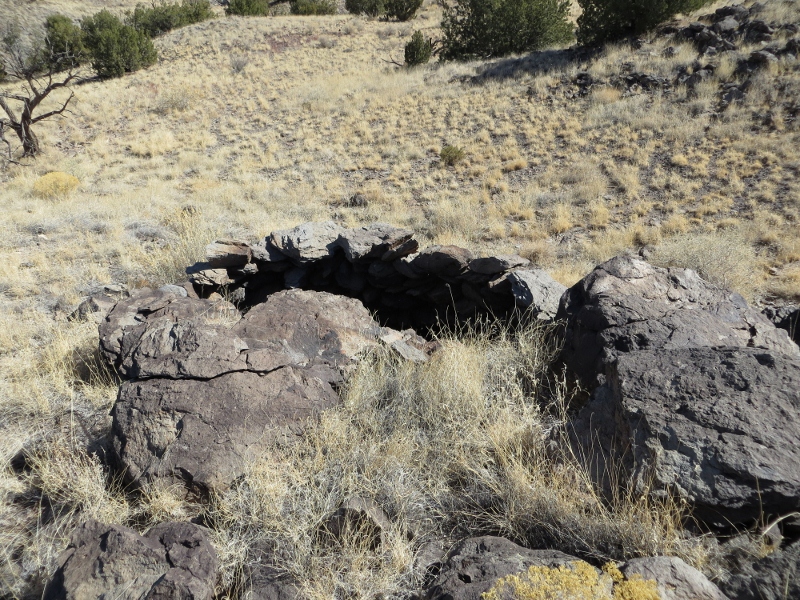 And to prove the case, we ran into a heard of antelope right at the top of the mesa. 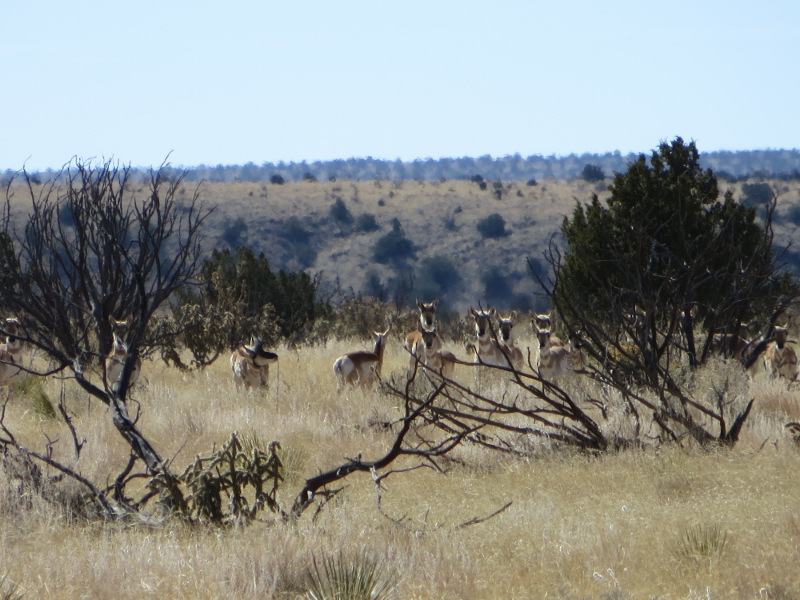 As we walked across the mesa, the antelope never ran away. They just kept a steady distance away from us. They obviously knew it wasn’t hunting season. Or perhaps, the area is so remote that they have never been fired upon by hunters and have no fear of humans.

When we reached the other side of the mesa, we looked down and saw a complex of ruins from an old homestead. It looked familiar, and I then remembered that I saw it on page 310 of 60 Hikes within 60 Miles: Albuquerque by Stephen Ausherman. That book describes a hike that reaches the very same ruins from a completely different direction than our route. 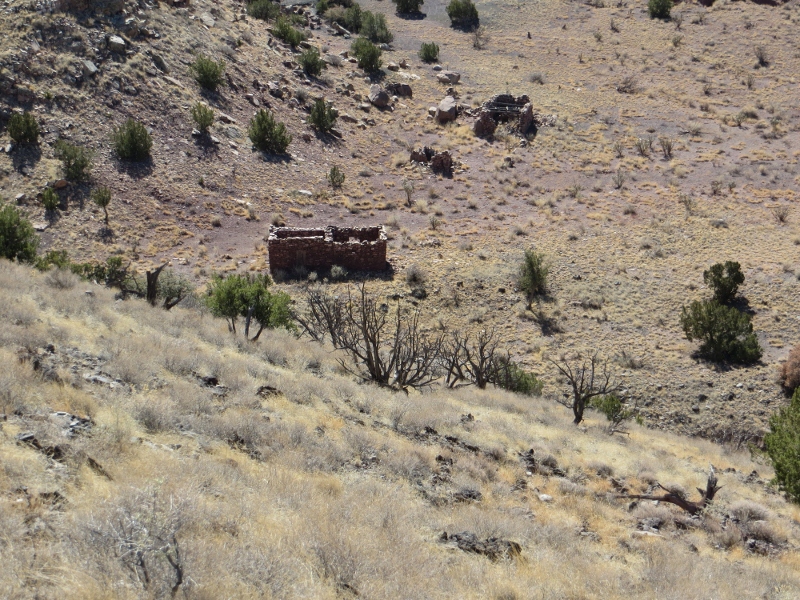 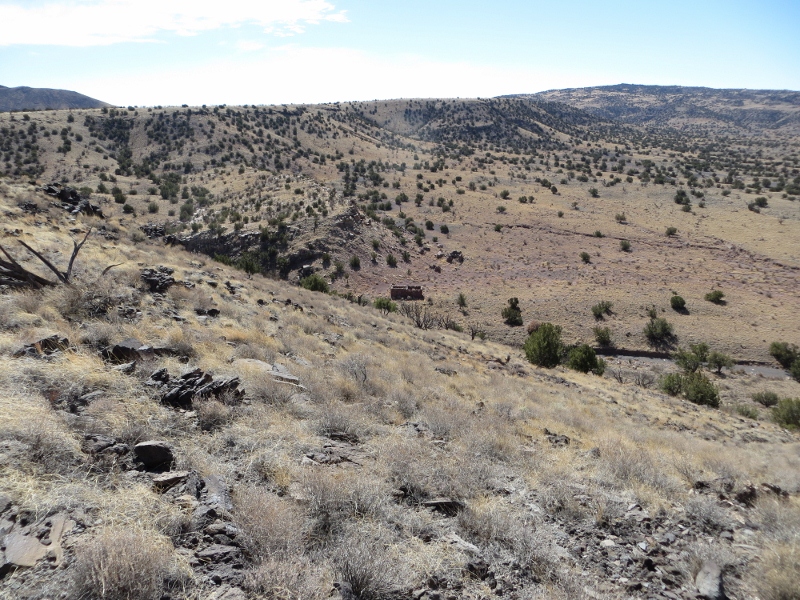 We hiked down to the ruin to get a closer look and to look for the spring that brought the homesteaders there in the first place. 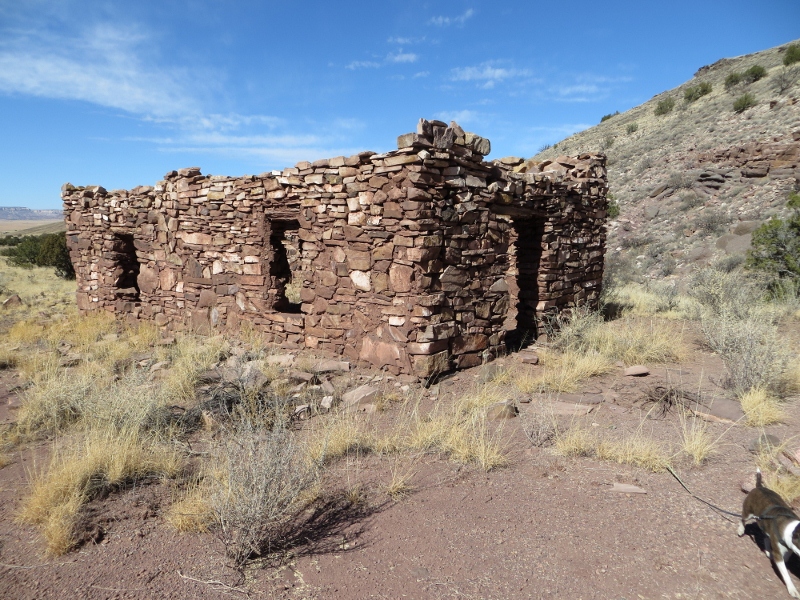 There were three old stone structures in the complex. This was probably the house. 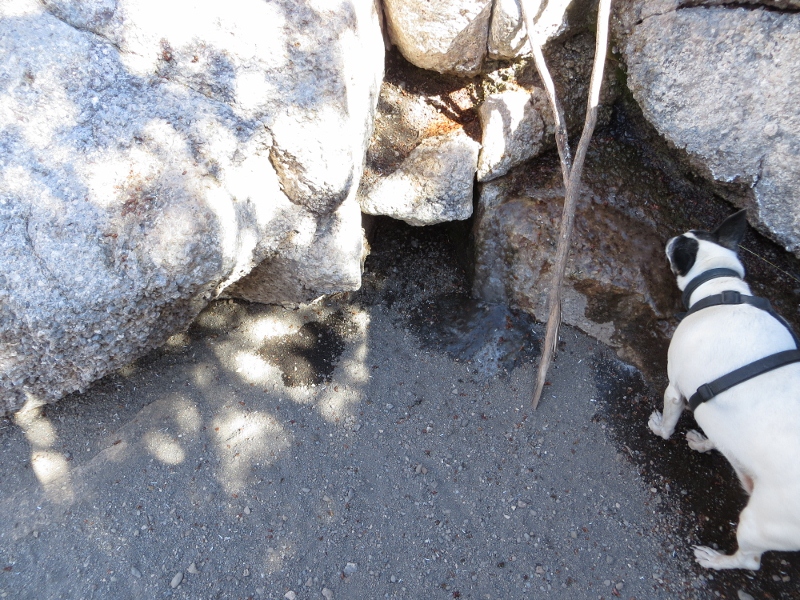 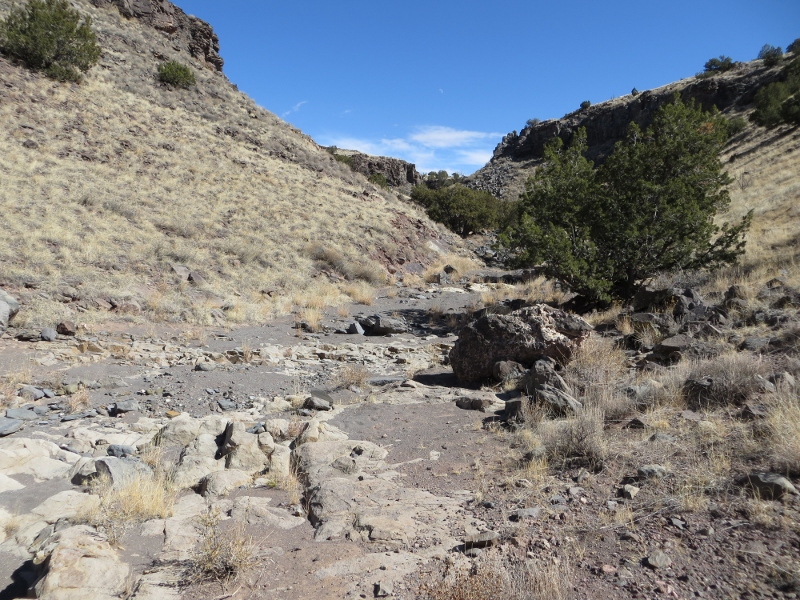 This dry canyon is immediately behind the spring.

After exploring the canyon behind the spring we took a different route back to our starting point. On our way we found more stone walls and enclosures that may date back to sheep herding days. 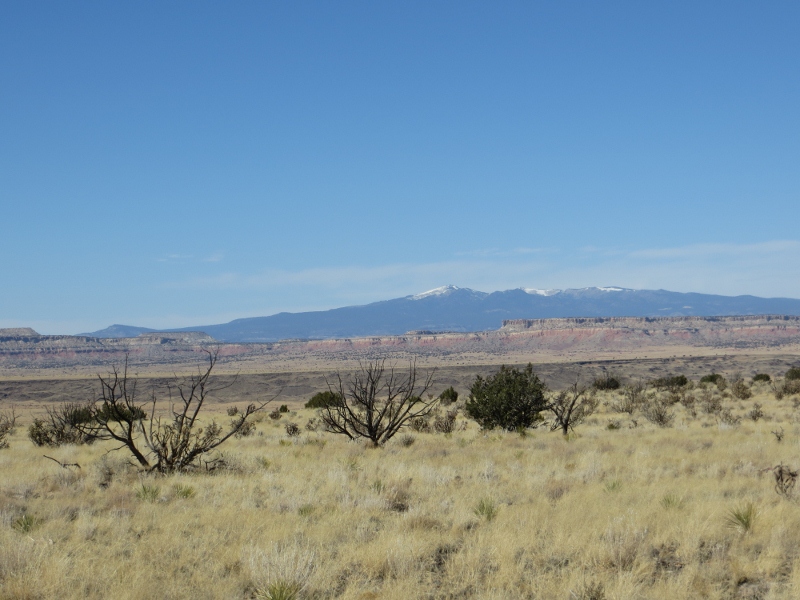 That’s Mount Taylor in the distance. 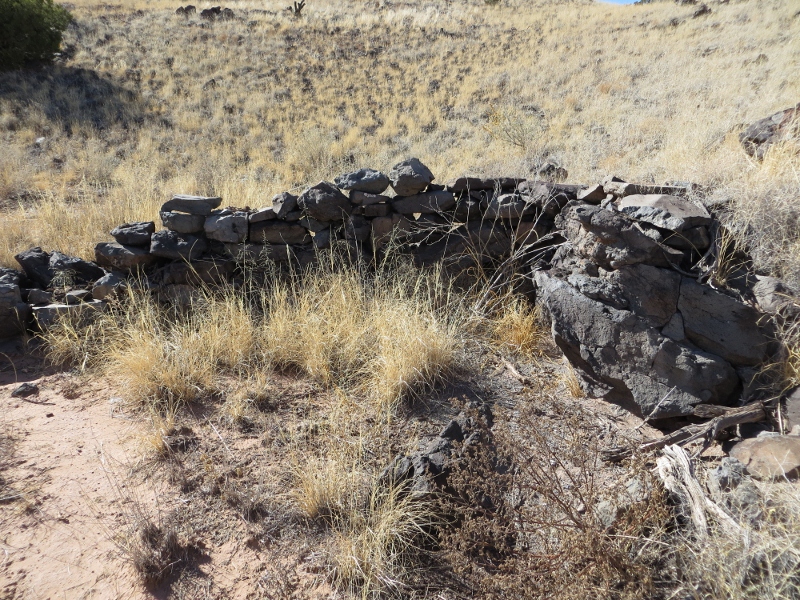 Any thoughts on what this wall was? 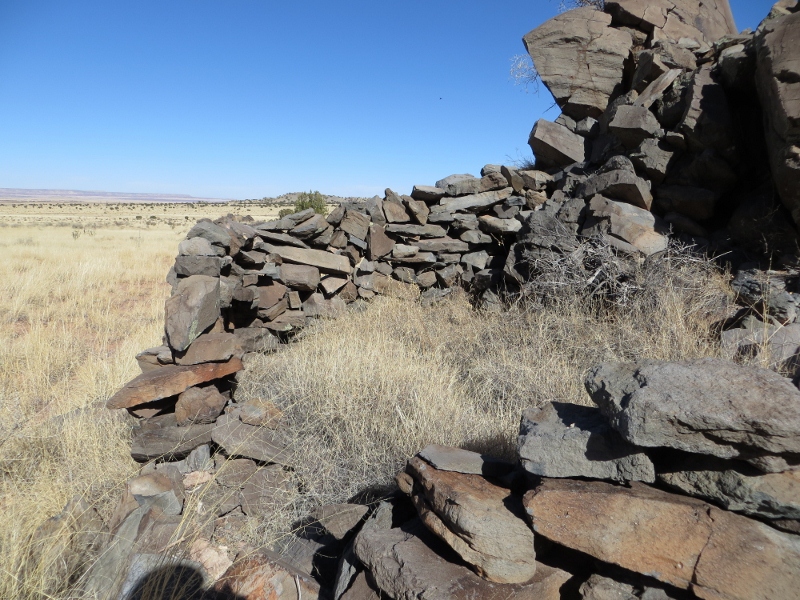 Or the use of this wall?

Or, maybe they were another variation of hunting blinds. Regardless of what they were, they are more examples of all that awaits you when you let yourself wander in quiet place.