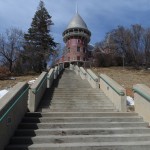 As we all know, we can walk the same path day after day and still wander into something new on every walk. But it’s also great to mix it up with something different. And that’s why ideas for new wandering adventures are important. They keep it fresh and make sure we get out the door.

Ideas can come from anywhere. Newspaper and magazine articles, or even a blog post like this, can lead to an idea. As an example, last Sunday an idea was served to me on a platter when I read, … climbs dozens of concrete steps daily from his home to his college office high atop a historic “castle”…, in the opening sentence of an article in the Sunday paper.

The “castle” in question happens to be Montezuma Castle near Las Vegas, New Mexico. This Las Vegas is on the east side of the mountains from Santa Fe, New Mexico and predates the more famous Las Vegas in Nevada by decades. Montezuma Castle was built as a luxury resort hotel with natural hot springs in the 1880s. The hotel and the surrounding grounds, including the hot springs, are now the campus of United World College.

I had visited the hot springs in the past and had seen the Castle from a distance, but I had no idea that there were significant stairways on the grounds. For those of us who like to soak in natural hot springs and explore stairways, it’s hard to imagine a better combination. Within two days of reading the article, the dogs and I were off to Las Vegas, New Mexico on a road trip.

When we reached Las Vegas we headed west of town toward the mountains. Within a few minutes we could see the Castle. Even though it was a chilly day, there were a few cars parked along the road and people soaking in the hot springs on the other side of the wire fence. 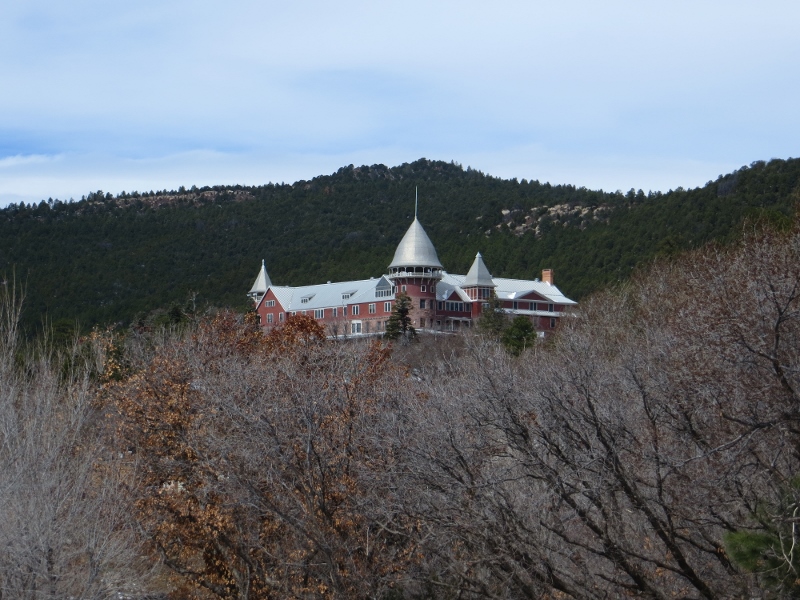 That’s what the castle looks like when you first see it from the road. 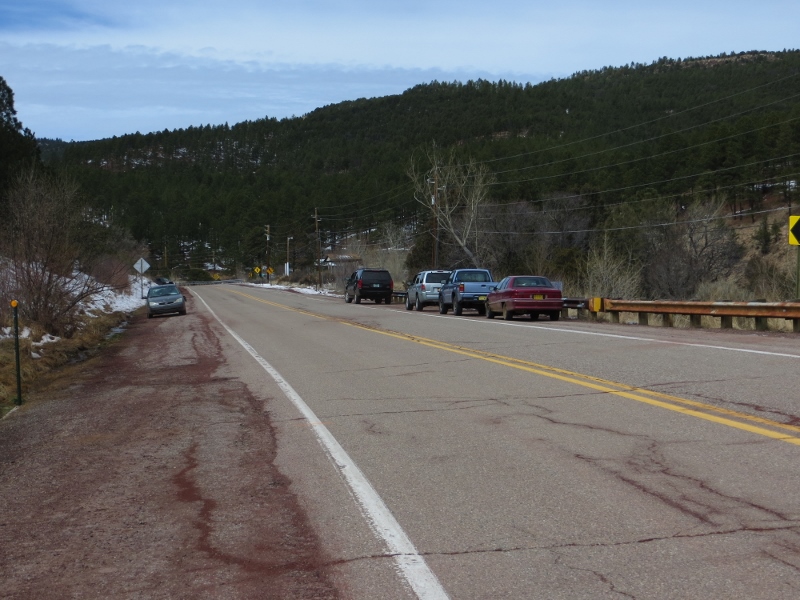 The hot springs are on the other side of the barrier.

Although the hot springs are on private property, United World College, with a few conditions, allows the public access to the springs. To make it easier to soak, they have constructed several small soaking pools. They range from very hot to warm. The hottest is called the “lobster pot,” and when I jumped in, I thought I was going to cook. I quickly jumped out and went to another pool to build up my tolerance before going back into the lobster pot. 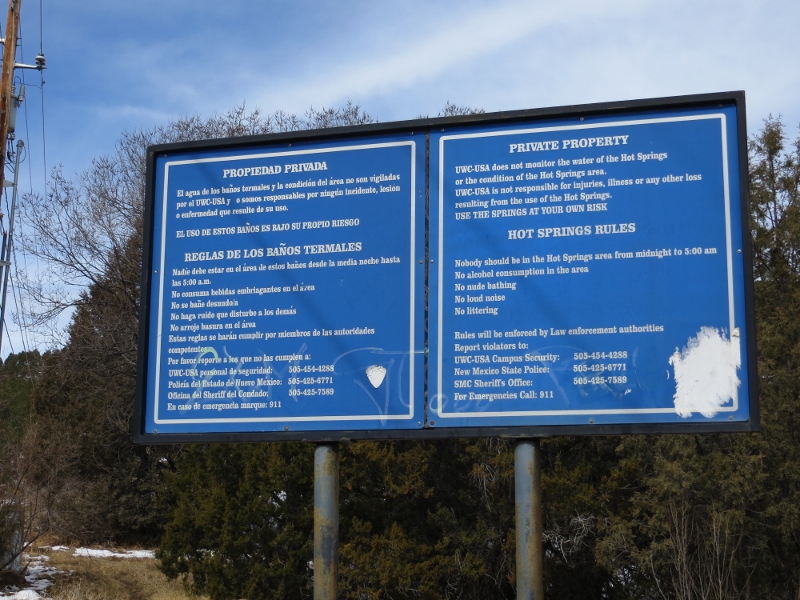 As you can see the restrictions on taking soaks are very reasonable. A group of volunteers keep the springs clean and tidy. They are great for soaking. 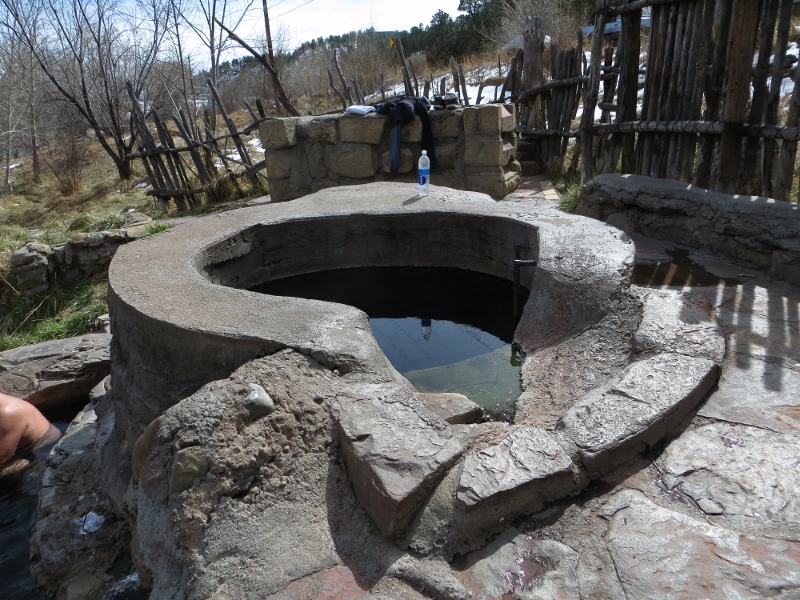 This is the lobster pot. The water here is very hot. Two or three people can stand in it and cook together. More tolerable pools are just below. 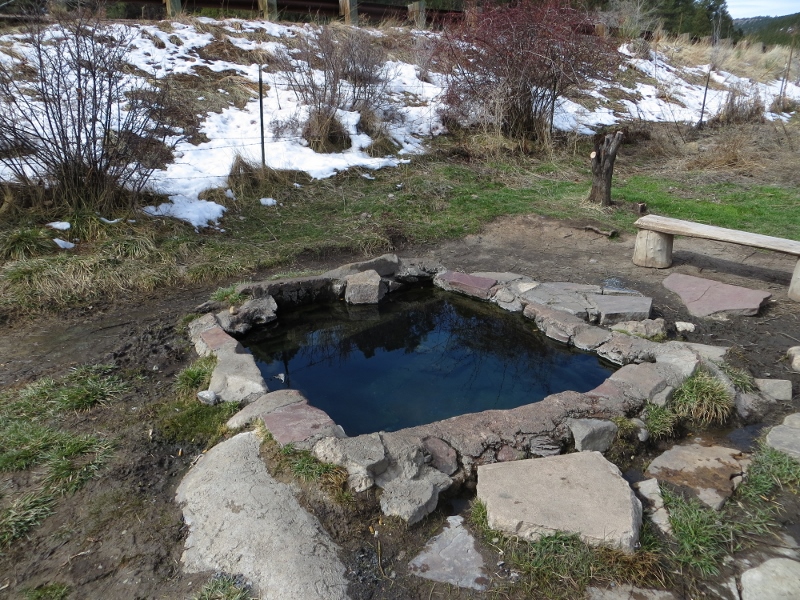 There are several other pools in the general vicinity. 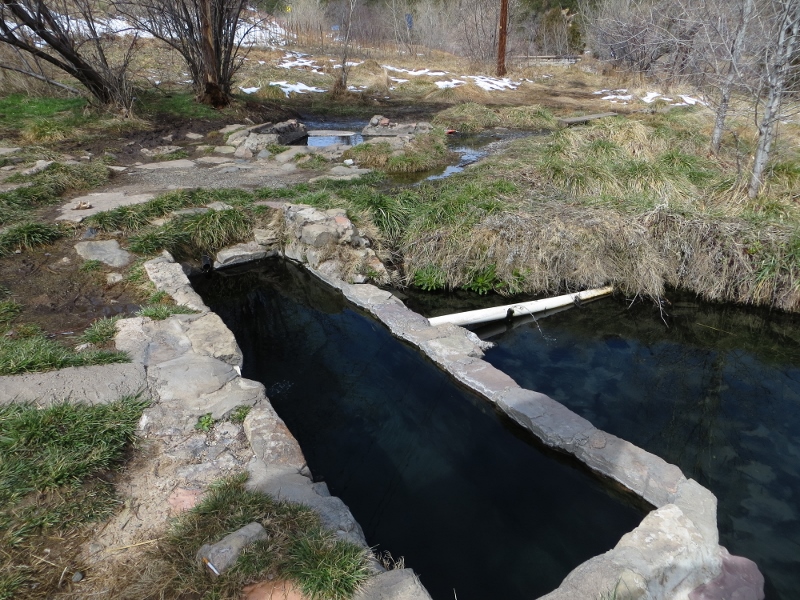 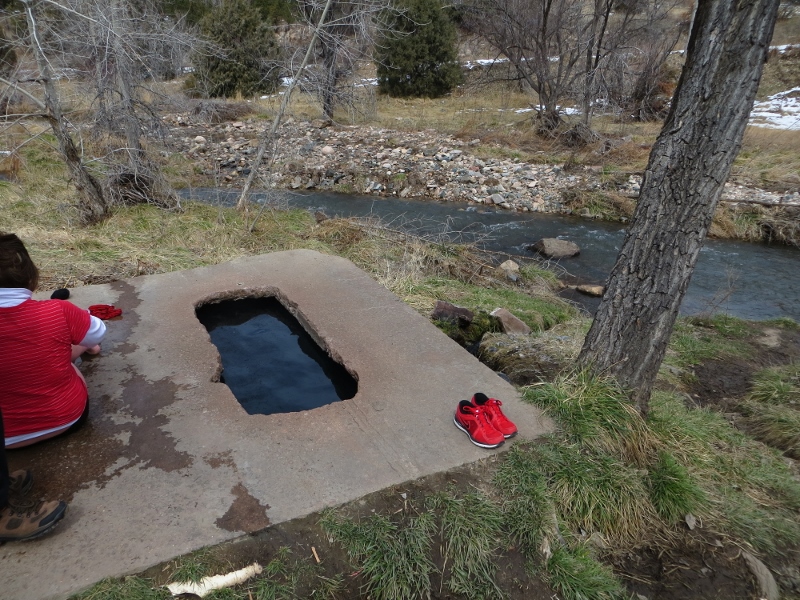 After checking out the hot springs, it was time to find the stairs. The dogs and I headed toward the Castle. There were some signs saying that the campus was closed to the public. The article that brought us here in the first place said that the College was considering opening up the Castle to tours. It is possible to get permission to visit the campus, but if you’re interested in climbing the stairs up to the Castle, you might want to wait until there are official tours.

In the meantime, it’s nice to know that there are two stairways waiting for you to climb. One stairway has 129 steps. And the other is broken up into several flights of stairs. Its main flight has 70 steps and when combined with the other flights, there are 123 steps. In addition to so many steps, the setting is spectacular and the steps take you right to the base of the Castle. It must be a fun place to live and to go to school. I personally am looking forward to taking a tour when they begin. 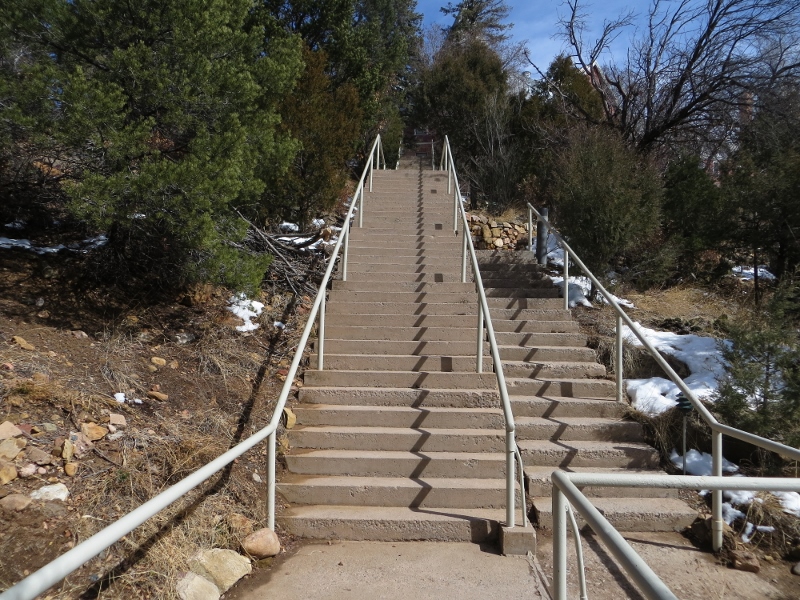 This stairway has 129 steps and leads from the lower campus to the Castle. 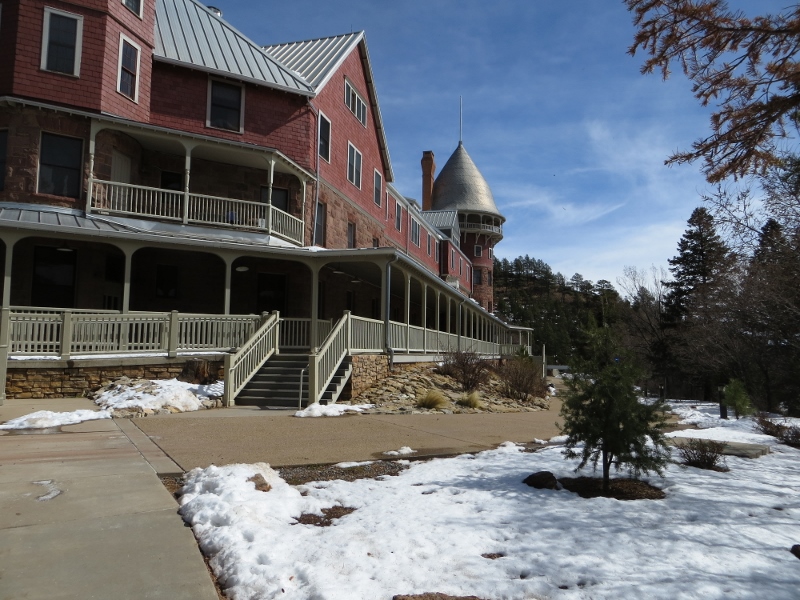 The stairs take you to the base of the castle. 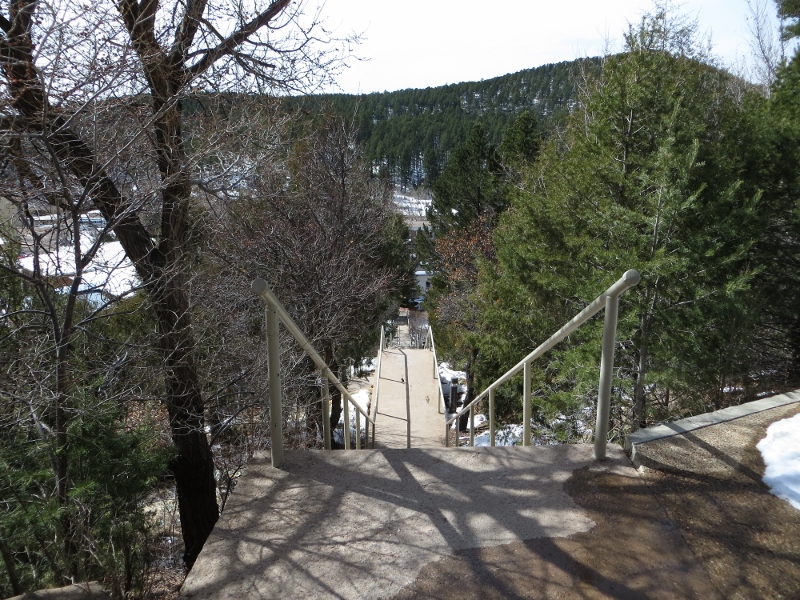 Looking down the stairs. As you can see the setting is spectacular. 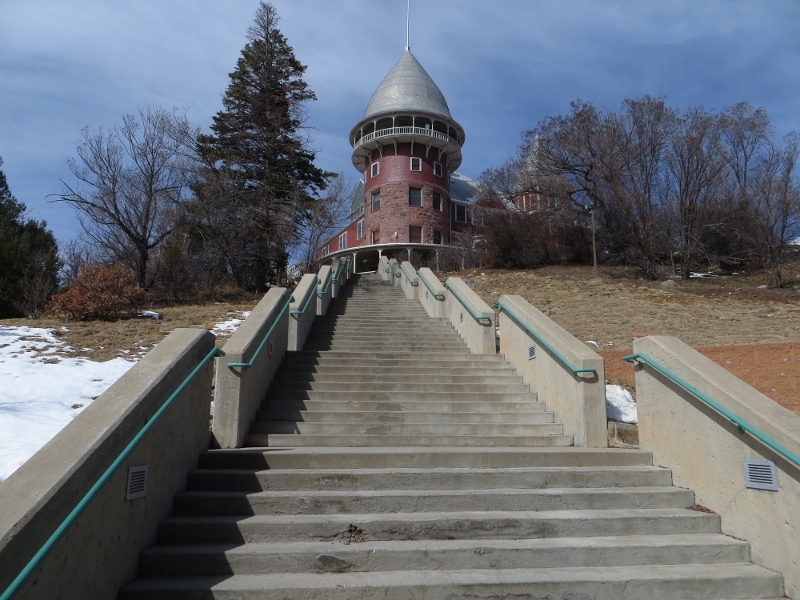 This flight of 70 steps is like a grand staircase taking you up to the Castle. 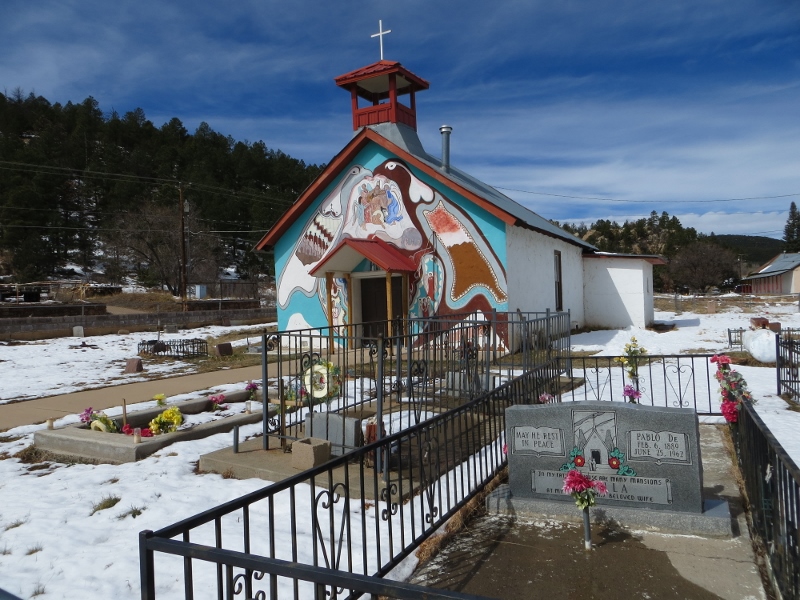 It’s impossible to go anywhere in New Mexico without running into an interesting church. This church is on the road to the Castle.

It’s amazing how an opening sentence of a newspaper article can lead to a great day of wandering. And that’s another important aspect of wandering. You never know what’s going to happen. But nothing will happen unless you get out.