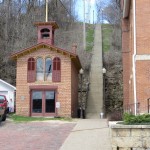 April 9, 2020 – Due to the continuing popularity of this blog post about Galena since it was written in 2013, I have expanded upon the topic of Galena and Dubuque and have just completed a new book called – Exploring Galena and Dubuque on Foot: By Sidewalk, Stairway, and Path. The book should be available for shipping on April 20, 2020. You can order the book right here on this website. Over time the book will become available at retailers in Galena and Dubuque. Thank you, David Ryan

Galena in the far northwestern corner of Illinois was a boom town during much of the 1840’s and 1850’s. Its economy was based on lead mining and its river port on the Fever River (six miles upriver from its junction with the Mississippi).

By the time Ulysses S. Grant moved to Galena just before the Civil War in 1860, the town was already in decline. (He moved there after a series of personal setbacks to work in his father’s leather business.) As for Galena, the lead mines were playing out; the river port was silting up; and commerce was shifting from river boats to railroads.

The economic stimulus of the Civil War and Ulysses S. Grant’s personal success during the war were not enough to halt Galena’s decline. As a result, its population shrunk and not much happened. Because of this there was no impetus to replace Galena’s 1840s and 1850s buildings with newer and more imposing structures.

150 years later, Galena’s mid-19th Century feel has made it a popular destination for weekend and day trips. With it being less than three hours from Chicago and its many hills, Galena has also become a favored location for second homes. The only drawback, if it can be called that, is that most commerce is oriented to the tourist trade.

Petey and I visited Galena on a cool but sunny Saturday in April. We didn’t go there to check out the shops lining Main Street. We went there to see if public stairways have a role in this very hilly river town.

We found a parking place at the north end of Main Street and started walking south. 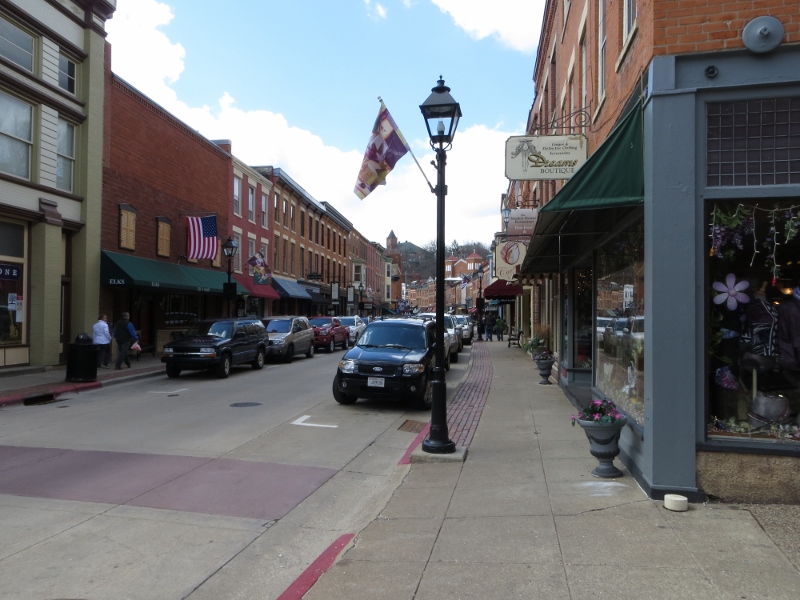 As you can see by the number of cars, business must be good on Main Street. 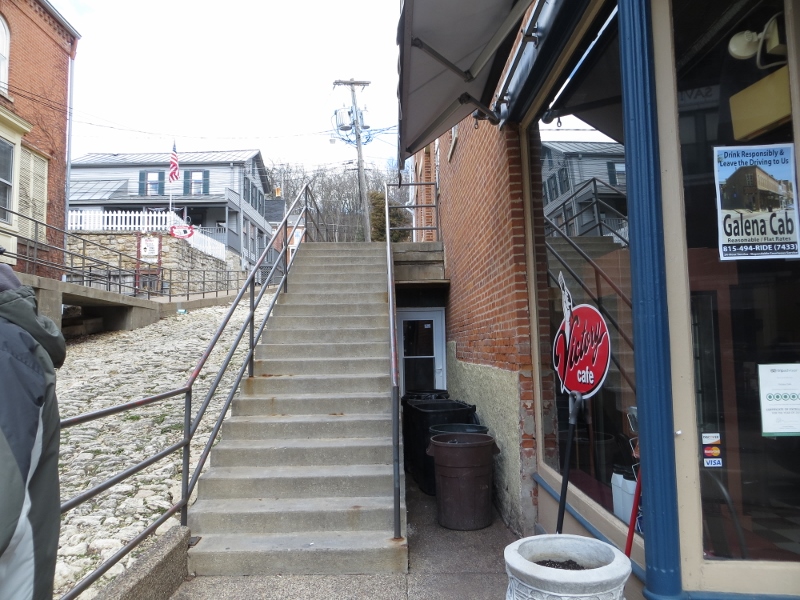 The first stairs we found were on the sidewalk along Perry Street. With its cobblestone pavement, it is now closed to cars. The sidewalk plus the 19 steps took us up to Bench Street. 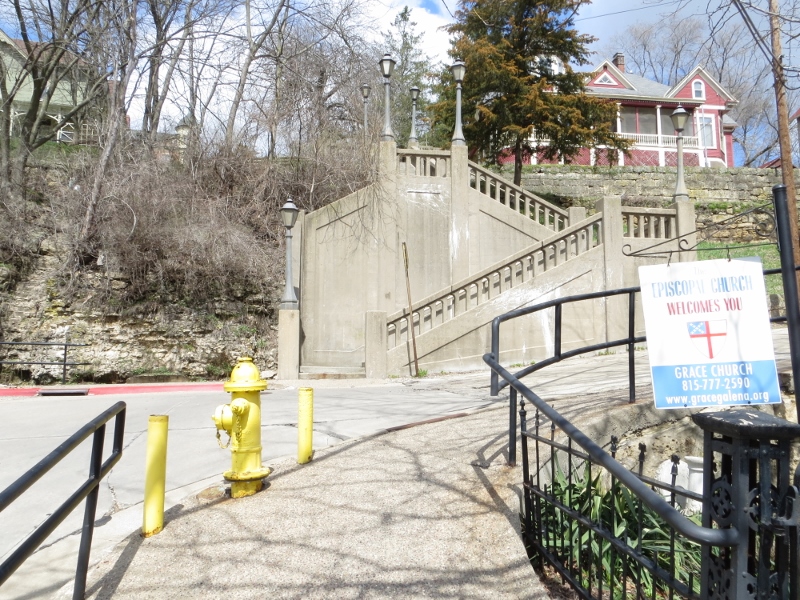 We continued down Bench Street and at the next street (Hill Street), we saw theses steps at the end of Hill. This stairway has a total of 90 steps. 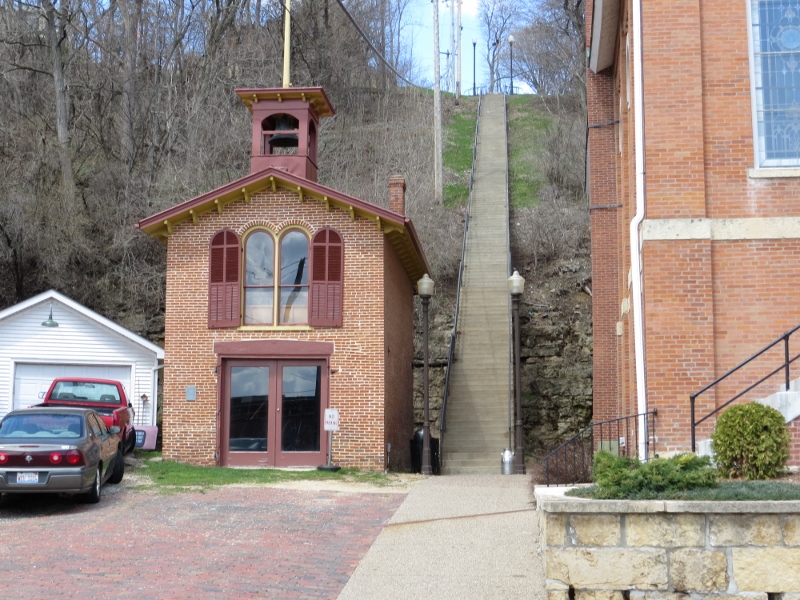 After climbing the Hill Street steps, we returned to Bench Street and found these stairs at the next cross street (Washington Street) next to the old firehouse. This set of stairs has 156 steps. 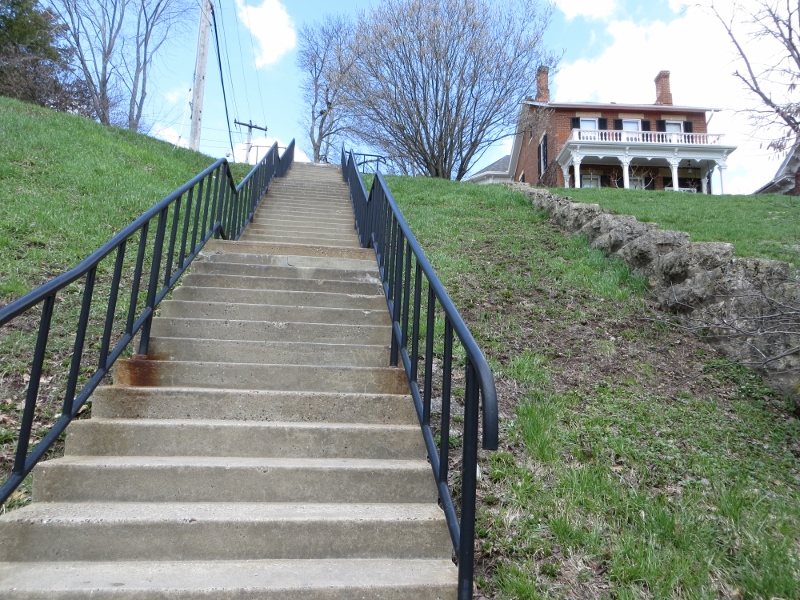 When we reached the top of the stairs in the previous photo, we came upon another set of stairs with 57 steps to take us to the top. The two stairways have a combined total of 213 steps. 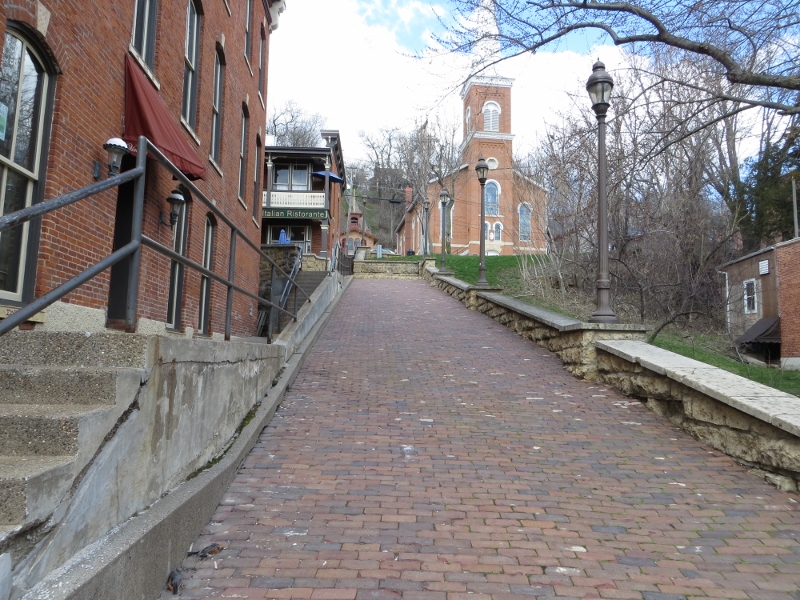 When we got back to the firehouse, we noticed that there were more steps leading back to Main Street. The sidewalk had a total of 37 steps. If you start at Main, it’s 250 steps to the very top. 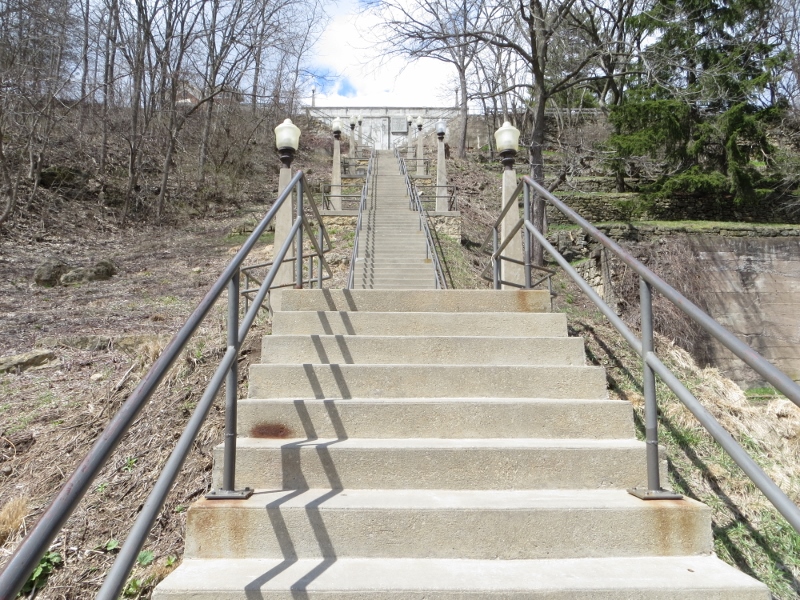 If you continue down Bench Street you’ll find these stairs at Green Street. It’s 148 steps to the top. 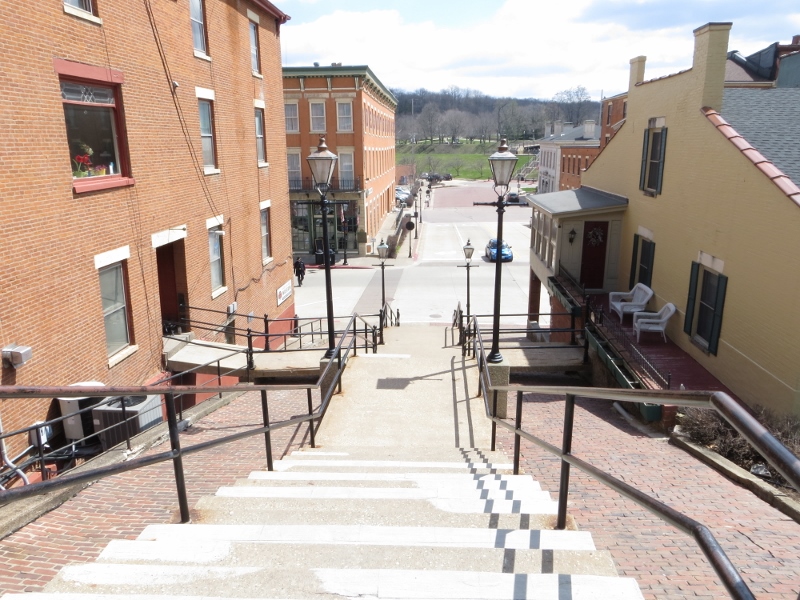 You can also take these newer stairs down to Main. It’s 43 steps down to Main. If you combine the two stairways on Green Street, it’s 191 steps from Main Street to the top. 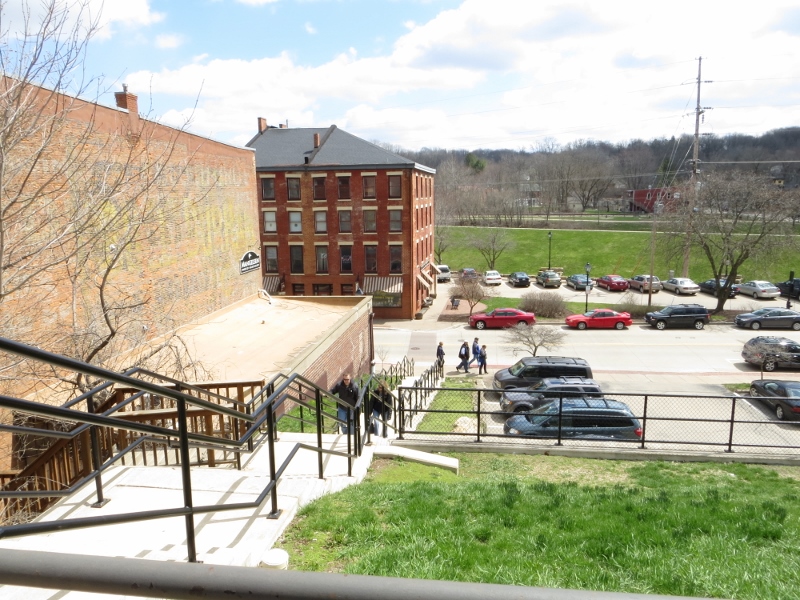 A little bit further south down Bench Street is this newer stairway connecting Bench and Main. It looks like the City of Galena is using stairs to make it easier for people to park their car on Bench and easily access the shops on Main Street. This stairway has 54 steps. 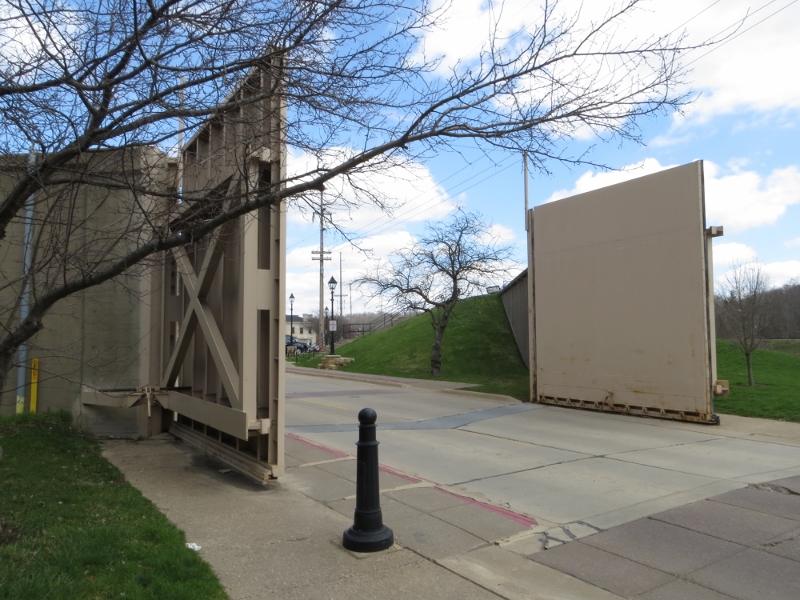 Although the river is no longer navigable, it still can flood. This flood gate at the south end of Main was built to protect the downtown business district from floods. 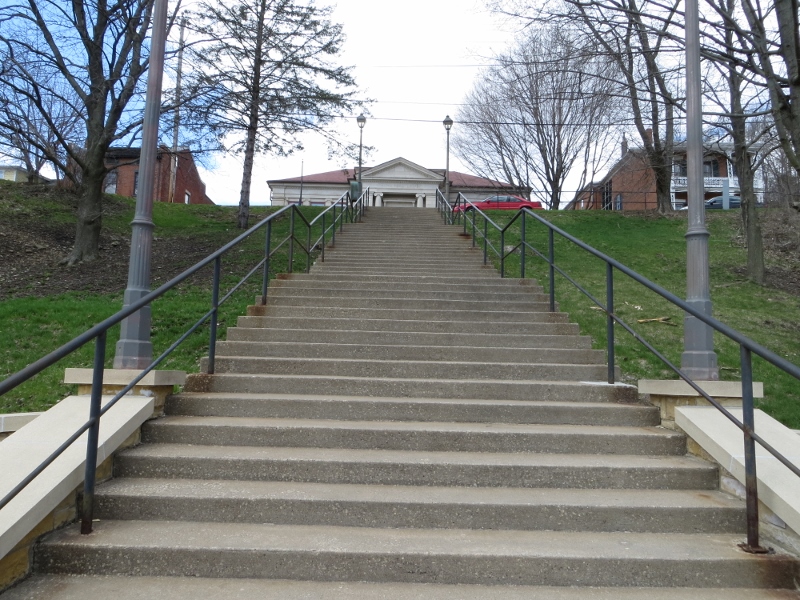 Beyond the flood gates are these stairs to the public library. It’s 85 steps to the front door. 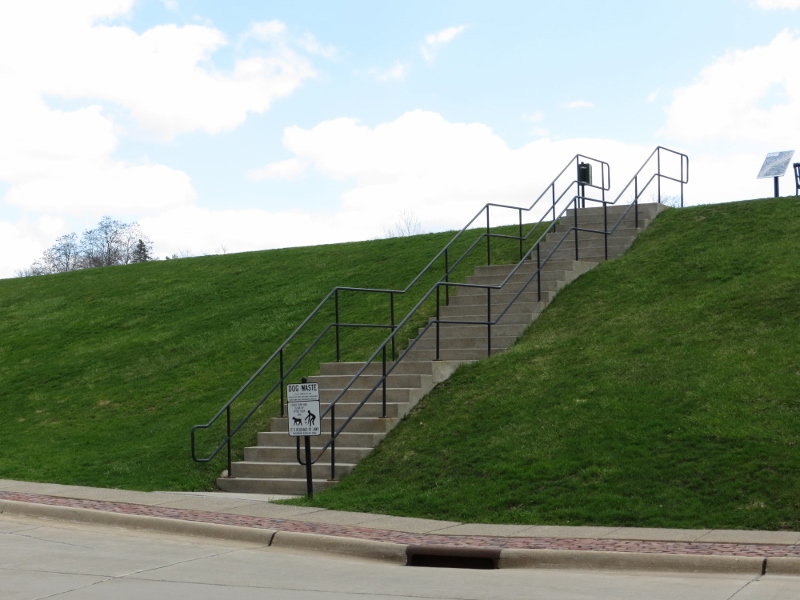 The city has built several stairways to a trail on top of the levee that separates downtown from the river. The walking path connects to a footbridge that allows visitors to get to attractions on the other side of the river by foot. 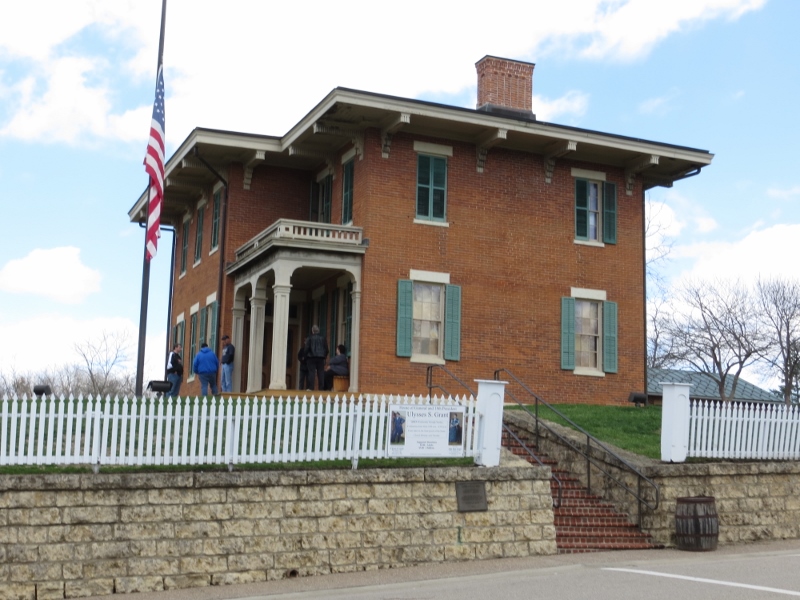 One the attractions on the other side of the river is the Ulysses S. Grant House. The house was a gift to General Grant from the citizens of Galena to thank him for winning the Civil War. 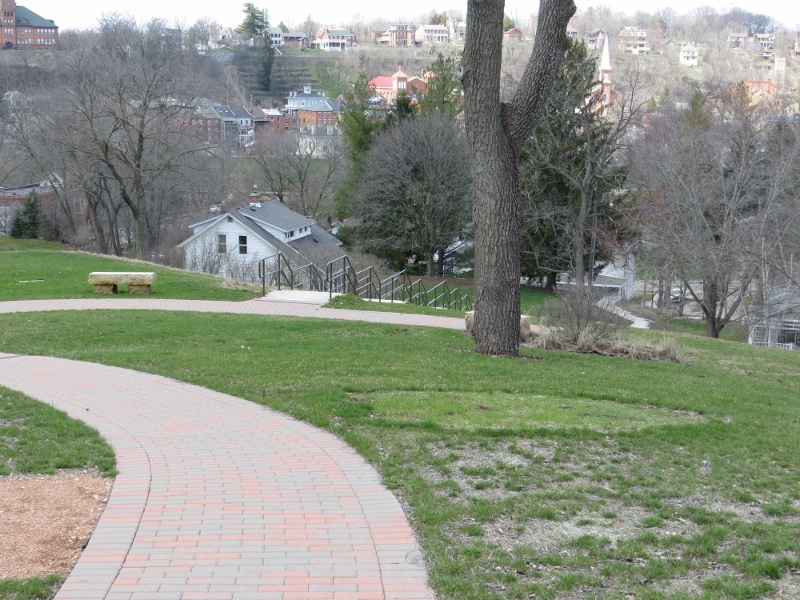 This new stairway with 106 steps connects the Grant House with the pathway and footbridge that leads back to downtown.

While on the other side of the river we did find these ghost steps near Park and Madison Street. It has 154 steps. 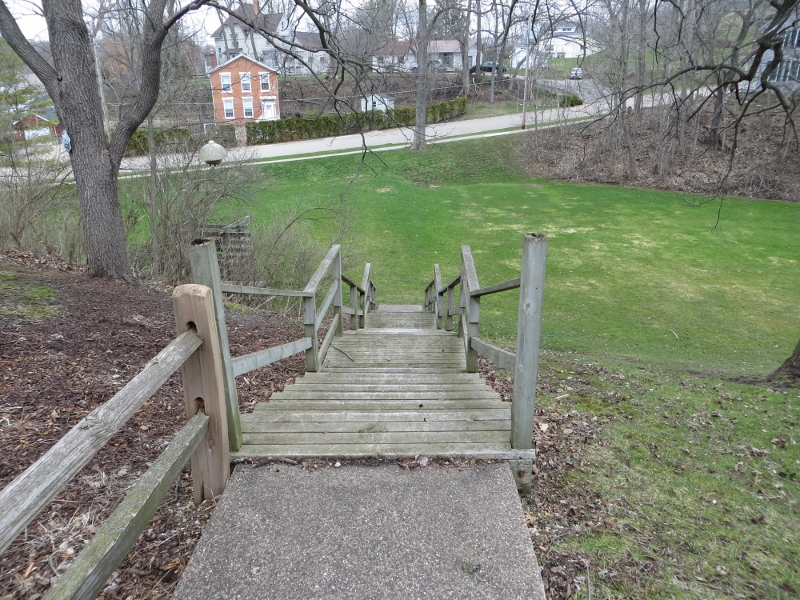 We also found this wooden staircase with its 30 steps connecting Third Street with this neighborhood park. 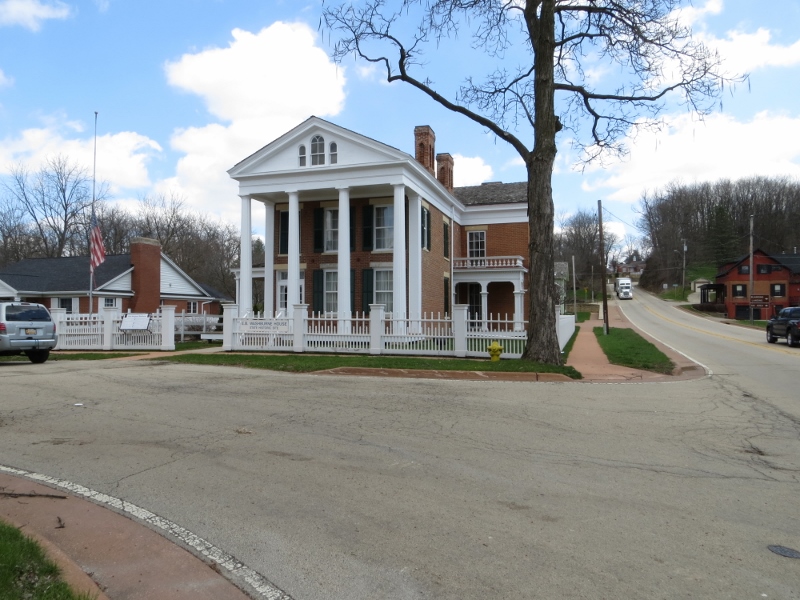 In addition to the stairs there were plenty of great 19th Century houses to check out. 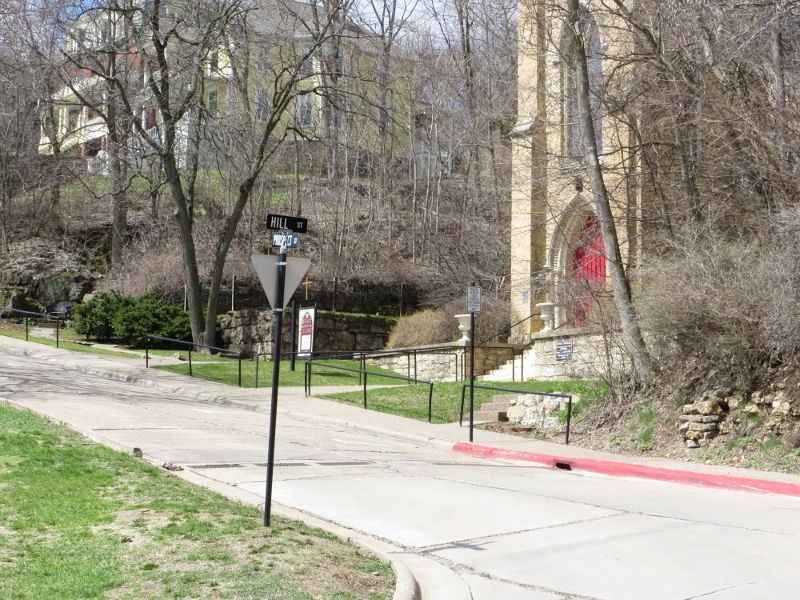 All of the streets made for great walks. Perhaps, if you have the time, you might even find more stairways.

In addition to making every list as one of the country’s great small towns, Galena also qualifies with its several stairways (with four of them being over 100 steps) and walking paths as great place to walk, wander, and explore. Unlike many towns with stairs, Galena is not ignoring its stairs. It has added to its stairway network to encourage people to get out of their car to explore the town on foot.